New looks, an interior makeover and more choice in the showroom mark the return of Ford’s Escape.

The 2017 Ford Escape has arrived in Australia, featuring tweaks that should help it turn around the slow sales of the Kuga small SUV it replaces.

The Escape is basically the Kuga with a new look, and features a wider range of models, including one fitted with a turbocharged 1.5-litre petrol engine. Other engine choices run to a 2.0-litre petrol engine, and an all-new turbocharged 2.0-litre diesel that has just appeared under the bonnet of the Ford Edge – a mid-size Ford Territory SUV replacement due on sale here in 2018.

Key to the revisions the Escape introduces is the addition of a $33,000 front-wheel-drive automatic version of the mid-specification Trend model; something that was sorely missing from the Kuga line-up in the eyes of new car buyers.

Its forced induction 1.5-litre four-cylinder engine produces 110kW and 240Nm, with fuel use officially rated at 6.3 litres per 100 kilometres. The engine is tuned differently for the $1500 more expensive six-speed automatic version, rated at 134kW and 240Nm.

The Ambiente entry-level model is now more feature-rich than the car it replaces. Steering wheel-mounted paddle shifters replace the awkward gear selector toggle that used to be on the side of the gear lever in auto models, the steering wheel is all new, and digital radio and a reversing camera with rear sensors are standard.

You also get cruise control with a speed limiter function, push-button engine starter, front and rear fog lamps and an electric parking brake replacing the Kuga’s manually operated one. 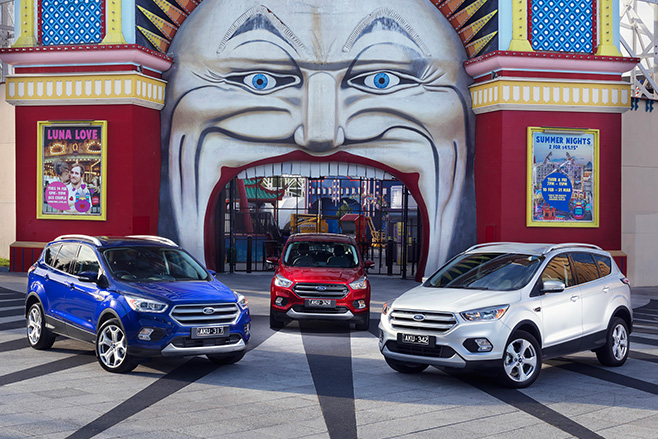 The Trend grade introduces a new front-wheel-drive model featuring the 1.5-litre engine and an automatic gearbox, and is priced from $32,990.

The Trend adds roof rails over the Ambiente, as well as tinted rear windows and 18-inch alloy wheels.

The windscreen wipers and headlights gain auto-on functions, and the rear-vision mirror will automatically dim at night to reduce glare. The Trend will also keep the lights on for a while after you step out of the Escape at night.

The most expensive model is the all-wheel-drive only Titanium. It is priced from $44,990 for the 2.0-litre petrol version, with the diesel again costing $3500 more.

It sits on bigger 19-inch alloy wheels, and includes keyless entry, power folding mirrors, self-levelling bi-xenon headlamps, leather seat trim, heated front seats with a 10-way powered driver’s seat (if you include the lumbar adjustment), front parking sensors, and a function that will self-steer the Escape in and out of car parks while you control the brake, throttle and gearshift lever.

Safety runs to seven airbags. However, automatic emergency braking that works up to speeds of 50 km/h is not available on the entry-level Ambiente, and is pushed into a $1300 “Technology Pack” for both the Trend and Titanium models.

The pack includes a lane departure warning system that even subtly nudges the car back into its lane, an automatic high-beam dipper, adaptive cruise control, and blind spot and tyre pressure monitors.

Ford sold almost 5000 Ford Kuga-badged SUVs last year, and is aiming for the new front-drive Trend model to pick up even more sales for the Escape-badged version.

It will face even more competition for about April when the segment’s leader, the Mazda CX-5 that sold five times as many cars in 2016, switches to an all-new model.