Mitsubishi will add another weapon to its SUV arsenal and in the most lucrative small-to-mid sized segment, when the eagerly awaited Eclipse Cross goes on sale on the 22nd of December priced from $30,500.

It will join the line-up neatly slotted between the Mitsubishi ASX and Outlander SUV siblings but closest in size to the smallest model, measuring 50mm longer than the ASX, 28mm taller and the same width.

The initial line-up will offer the entry level LS (below), which gets two-wheel drive and a CVT automatic transmission as standard, while the other two variants wear the Exceed badge in a choice of either two- or four-wheel drive. 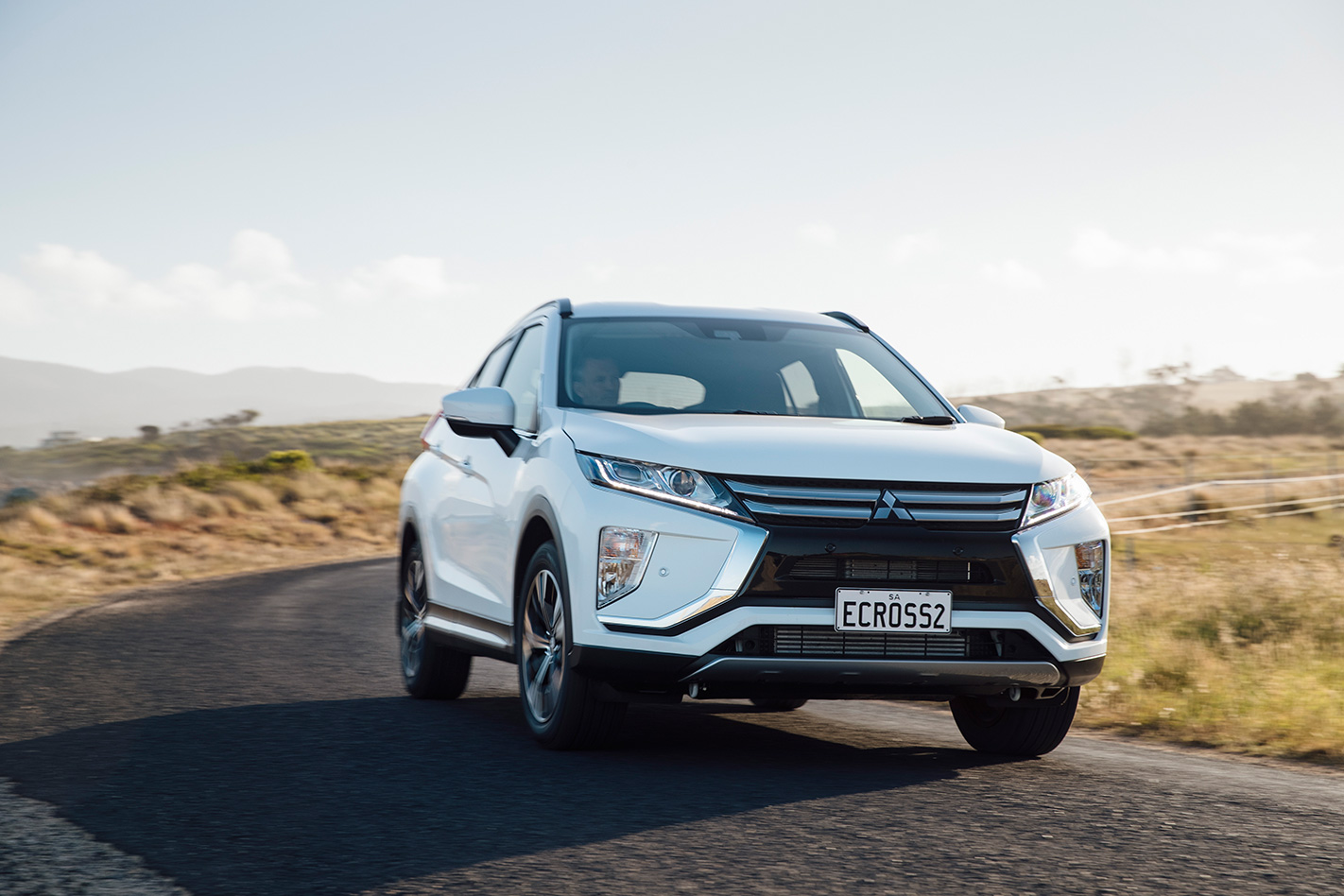 The Exceed front-driver takes care of the middle of the range priced from $36,000 while the top-of-the-line Exceed all-paw costs an extra $2500.

That pricing gives the ASX room to keep attracting a strong fan-club with a sharp $25,000 opening price, and an audience with a smaller budget.

Customers that can’t quite stretch to the current base price may not have to be disappointed, with a fourth variant on the way at a point to be confirmed, offering an even more affordable version badged ES. Exact pricing and equipment is yet be confirmed. 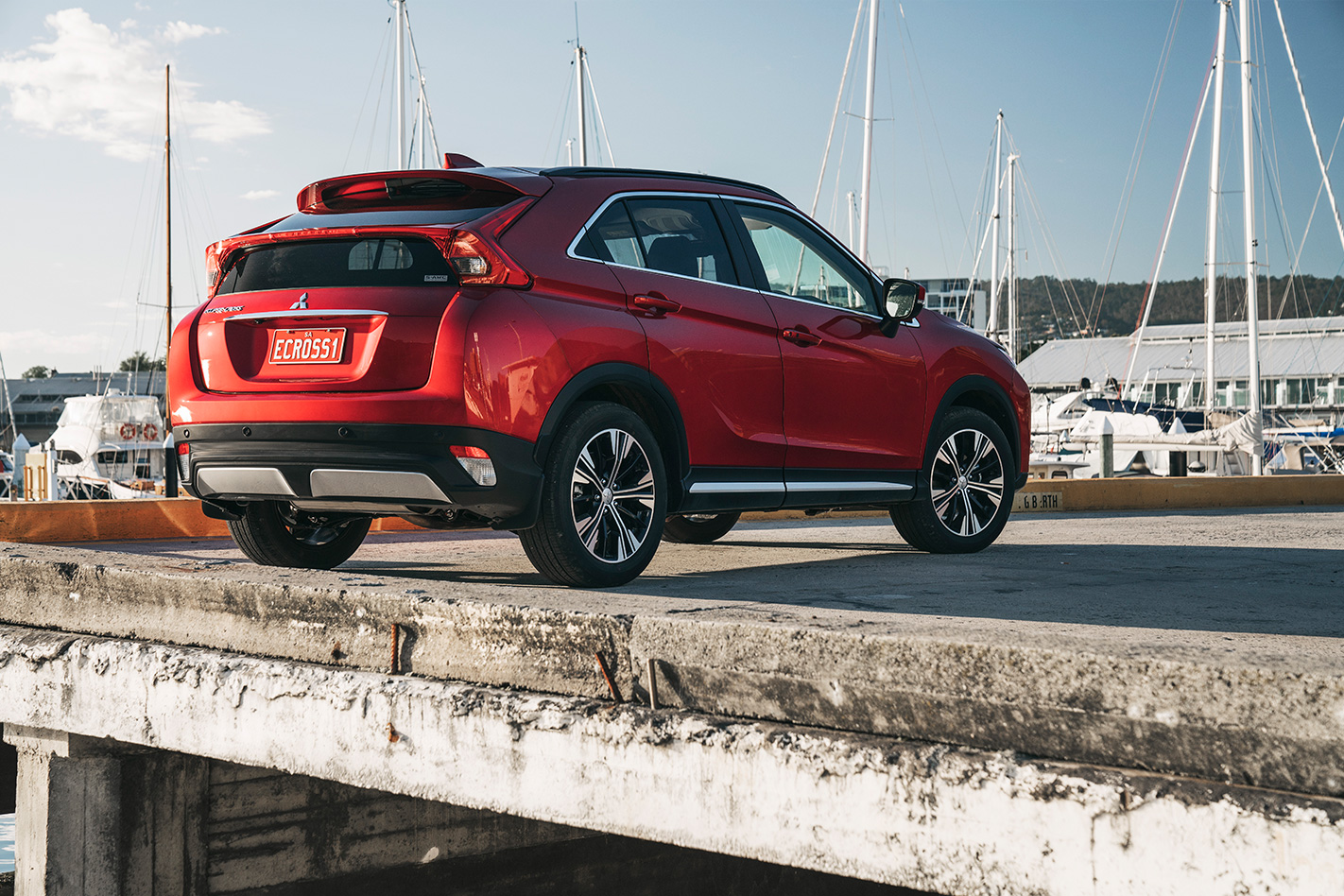 Mitsubishi made the decision to introduce the three more highly specced Eclipse Cross options in the name of expediency, rather than delay the model’s launch Down Under until the ES could join them.

According to the Japanese car maker, 15,000 potential customers have lodged expressions of interest in the Eclipse Cross and Mitsubishi is not making them wait a moment longer than necessary.

All versions are powered by a new 1.5-litre turbocharged four-cylinder petrol engine that produces 110kW and 250Nm of torque, and equipped with a CVT transmission, which has been programmed to simulate eight ratios when in paddle-shift manual mode. Two-wheel drive versions use 7.3 litres of fuel per 100km while the heavier four-wheel drive Eclipse Cross uses 7.7L/100km. 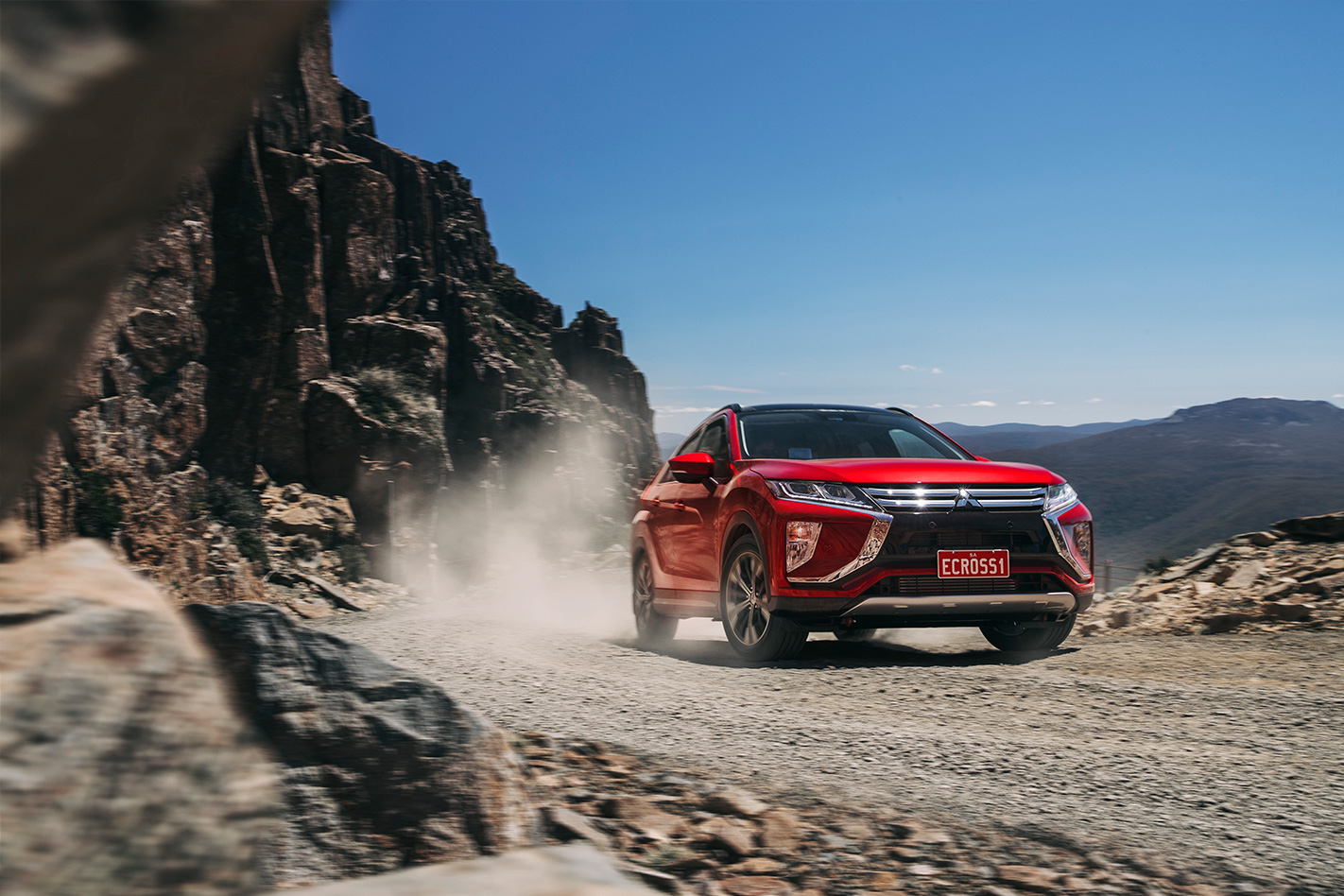 Hook up a braked trailer and the Eclipse Cross will tow up to 1600kg while maximum unbraked towing is rated at 750kg.

When ordered in top-shelf AWD variety, the Eclipse Cross is equipped with the latest version of Mitsubishi’s Super All-Wheel Control, which allows the more adventurous owner to go further with three driving modes: Auto, Snow and Gravel.

Despite its off-road promise, Mitsubishi says the new model has been designed to also deliver on-road enjoyment with its stiff and lightweight shell, large brakes, front MacPherson suspension and multi-link rear set-up all engineered for maximum driver enjoyment. 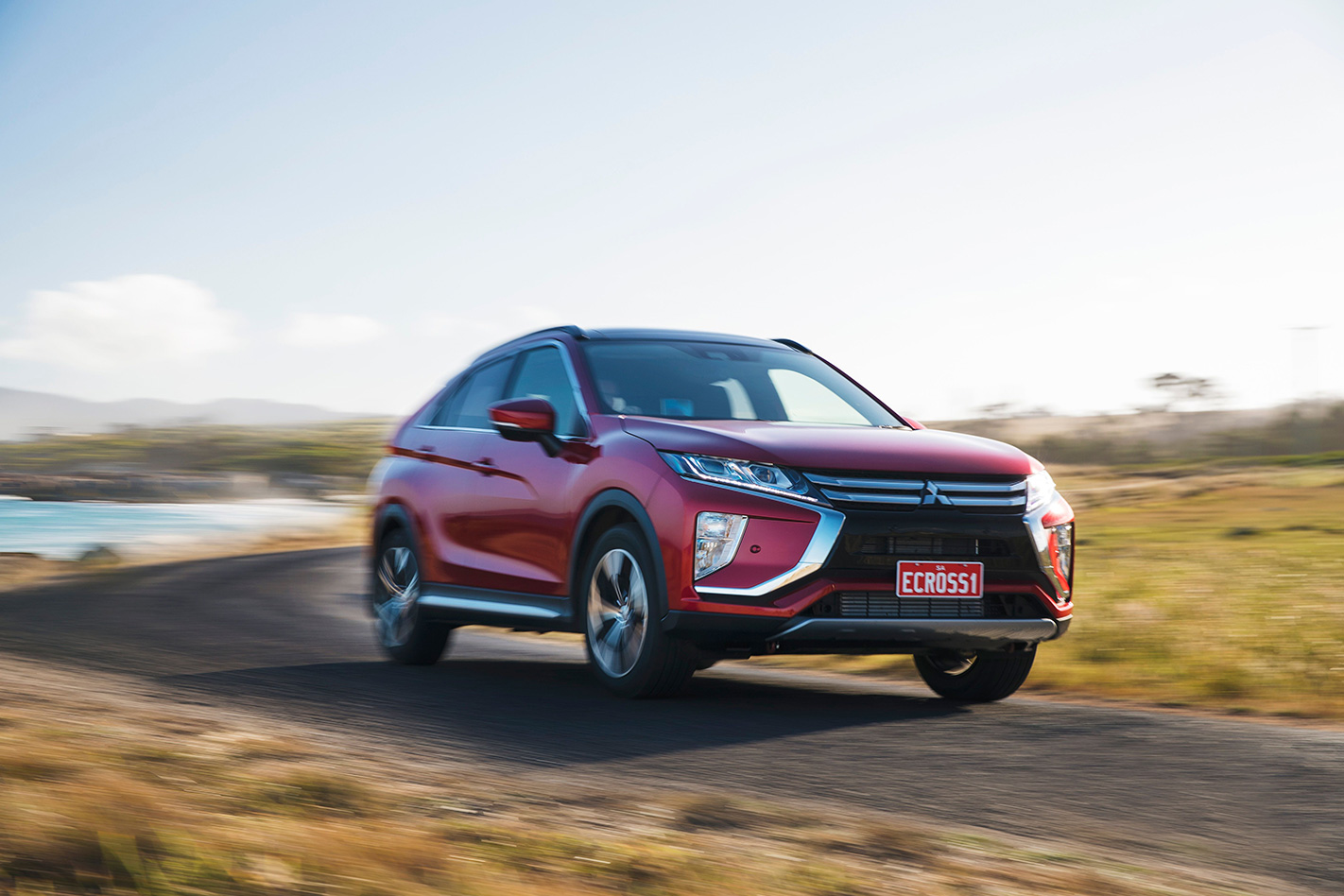 On the inside, the 341-litre boot can be expanded to 448L thanks to a sliding and reclining second row of seats, which can move 200mm for either maximum load capacity or rear-seat occupant comfort. For maximum cargo space of more than 1000 litres the 60:40-split seatback folds flat.

Rear doors open to 75-degrees to aid the loading of children and things, while all occupants will appreciate clever touches such as sill garnishes on the full height doors that prevent passengers getting muddy legs when exiting after an off-road adventure.

Full smartphone mirroring through the standard 7.0-inch touchscreen is available for both Android Auto and Apple CarPlay, although only Apple products can be navigated additionally through a separate Touchpad Controller in the centre console. 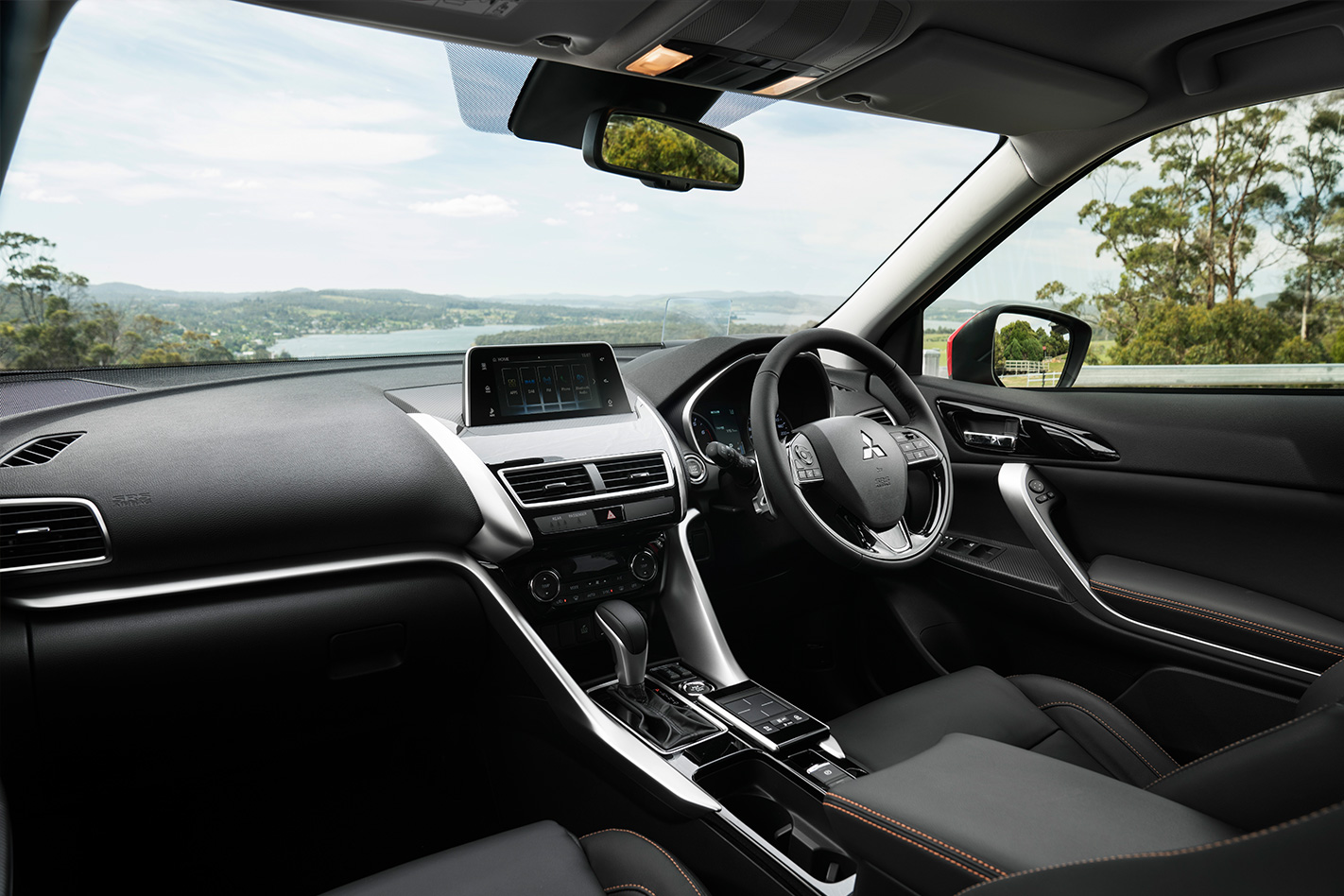 Digital Audio Broadcast plus (DAB+) radio is also standard for all, along with navigation, keyless entry, a digital central information display nestled between the analogue speedometer and tachometer gauges.

Step up to the Exceed and a head-up display is also included for displaying speed, gear, navigation and vehicle warning information to the driver without having to look away from the road.

Stretch to the Exceed and Mitsubishi throws in blind-spot monitoring, 360-degree maneuvering camera, rear cross-traffic alert and a mis-acceleration mitigation function, which monitors nearby objects at low speed and can prevent a collision caused by the pressing of the accelerator instead of the brake. 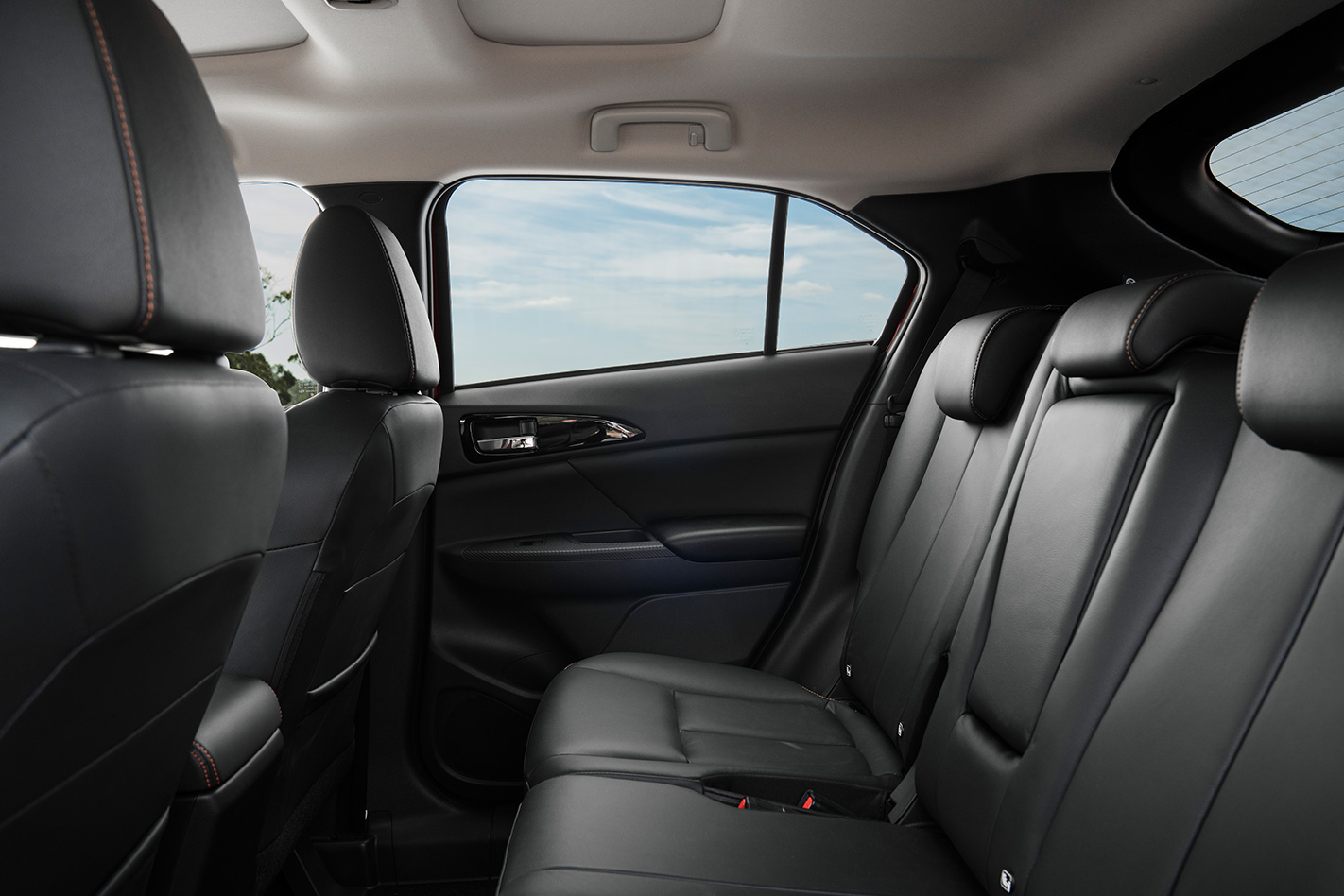 Other Exceed highlights include part leather seats with heating for the front row and electric adjustment for the driver, LED headlights, dual-zone air conditioning, separate sun-roofs for front and rear passengers and a self-dimming rear-view mirror.

A particular red paint colour that uses a special application technique is a new addition to the Mitsubishi line-up. While regular metallic paint consists of colour and metal flake suspended in the same coat, Brilliant Red uses a base layer of plain silver metallic covered by a first coat of clear, followed by a semi-transparent red coat and then finished with a final top coat of clear. The hero colour offers a deeper lustre and finer finish, says Mitsubishi. 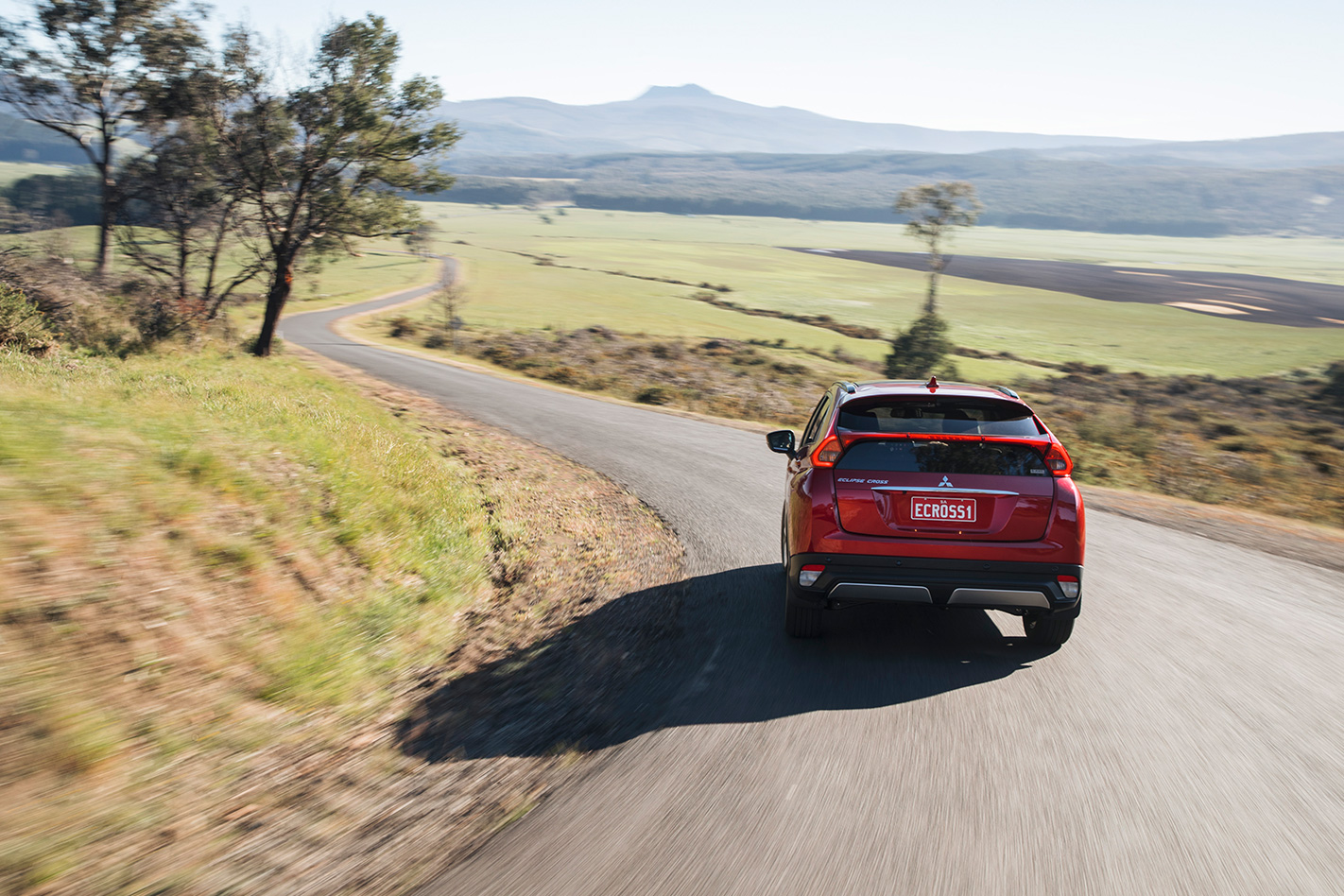 Evolving from the XR PHEV-II concept, the newest member of the Mitsubishi line-up brings a trendy new coupe-style roofline to an otherwise conventional-looking family of high-riders, and a number of new styling features including the split dual rear screens, rear lights that fall into the lower bumper area and wedge-shaped belt line.

Although there is still plenty of family resemblance derived from the Dynamic Shield design language to tie the new Eclipse Cross to its stablemates. 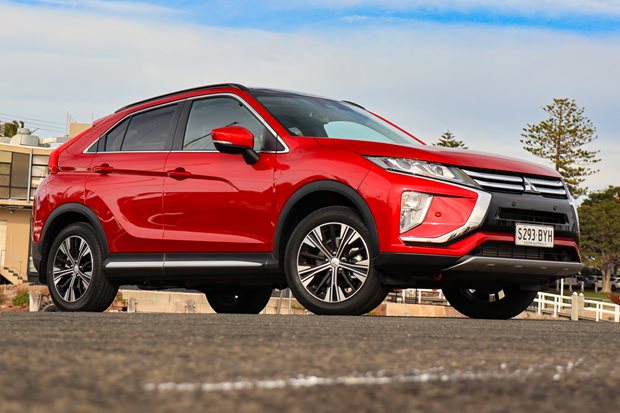 The Eclipse Cross slots into the tiniest gap in Mitsubishi’s SUV line-up, but is it an SUV too far? 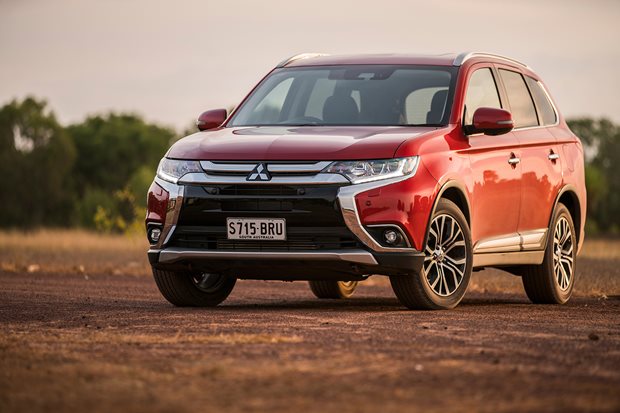