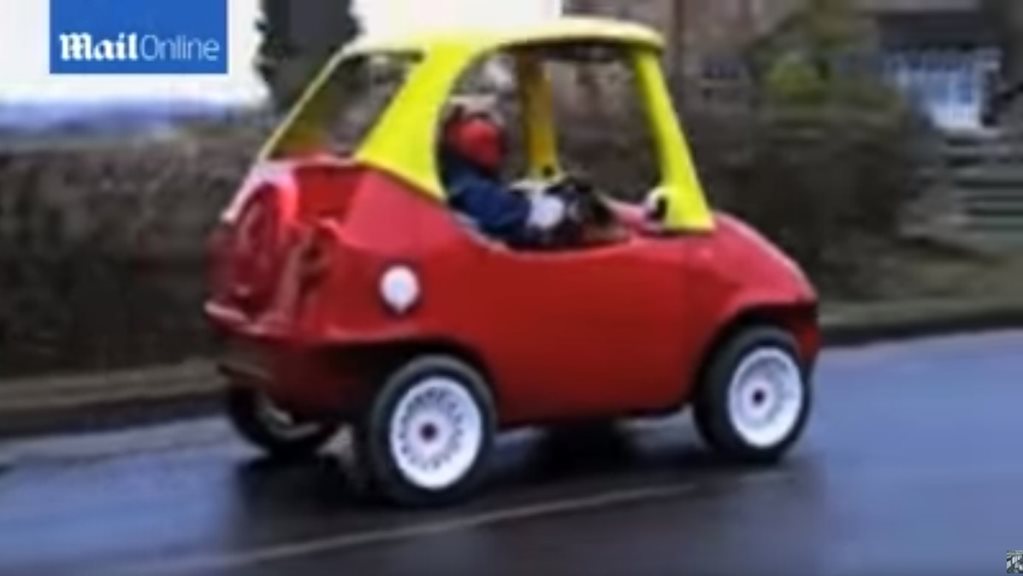 An English mechanic has built a life-sized version of the classic ‘Cozy Coupe’ kids toy. The road-going replica was for sale on eBay for around $65,000.

Remember those little red cars with the yellow roof? Well, a fellow by the name of John Bitmead from Bicester, Oxfordshire spent four months creating an adult-size version.

John copied every detail, from the bright red body, to the glassless windows, and even added some enlarged drink holders. Except, rather than having to drop your feet through the floor and run like Fred Flinstone, John’s creation gets its power from an 800cc engine;  allowing this Little Tikes mobile to sprint to 100km/h in just 17 seconds.

John started with a Daewoo Matiz and spent over 16 weeks turning it into the ‘Crazy Coupe’ that it is today. Last year, the car was put on Ebay along with the caption:

'We have covered over 5,000 miles in the past two years driving around shows and charity events in the UK and apart from it not being the fastest car on the planet has been the most incredible fun with people queuing up to take photos along dual carriageways and highways on every trip. Guaranteed to create smiles wherever it goes!’

Despite a couple of enquiries, it never sold, so for now, Bitmead is holding on tight to his little red and yellow Crazy Coupe, and even using it to continue to make people smile at various charity events.

As the old saying goes, “Growing old is mandatory; growing up is optional”.

Want more? Check out this Tesla Model S for kids.