So is it or isn’t it? Mystery surrounds a pair of stolen images of Ford’s Broadmeadows production line that claim to show the final Aussie-made Falcon ute being built.

According to Ford, the last Falcon ute is yet to be built – and for that matter, the last of the line for the Ford Falcon sedan and Ford Territory SUV as well.

So what do these images show? Not even Ford Australia seems to know. In the briefest of brief statements, a spokesman told WhichCar: “...This is not accurate!”

The empty ute shell shown – it is yet to have any parts fitted – has an A4 sheet of paper stuck to it reading “Last Australia Ford ute” along with a serial number. The front bumper also has the word “LAST” written in black marker. 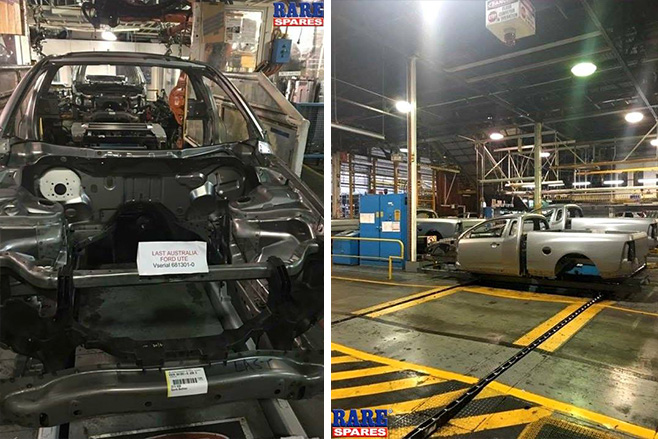 The images, posted on Rare Spares social media late yesterday, also suggest the not-so-final final ute started its trip down the assembly line on July 17, more than three months before Ford Australia shuts the door on almost a century of local manufacturing, and more than half a decade of Falcon production, on October 7.

The post has also provoked a string of angry responses from Ford fans, many of whom feared the company has not given the ute – a concept invented in Australia and exported to the rest of the world – a fitting sign-off.

“Good to see Ford giving it the respect and ceremony it deserves,” Dave Moy wrote, sharing a sentiment expressed in a number of comments pinned to the images. “A little printed bit of paper stuck on the body. Sadly, this is partly why the Falcon is going.”

Ford is yet to announce what it will do with the final Falcon and Territory models that will roll off the Broadmeadows line. It is believed the carmaker has very specific ideas about what will happen with the final cars – once they’re built.