The world-first program began operating on 1 December 2019, with warning letters being issued for the first three months.

The penalty for defying mobile phone detection cameras in NSW is five demerit points and a $344 fine (or $457 if you use it in a school zone).

The penalty increases to 10 demerit points during double-demerit periods, from a licence maximum of 12. Big price to pay for picking up an iPhone...

Authorities are planning to roll out 45 cameras across the state in largely undisclosed locations, which gives them the potential to check up to 135 million vehicles over the next three years.

However, the location of the majority of NSW mobile phone cameras won't be disclosed.

"A decision has been made not to disclose the location of the cameras," said Bernard Carlon, the executive director at the Centre for Road Safety. "Driving while using a mobile phone is dangerous behaviour and motorists need to know that they can be caught at any time, anywhere.

“Independent modelling has shown these cameras could prevent around 100 fatal and serious injury crashes over five years. There is strong community support for more enforcement, with 80 percent of people surveyed supporting the use of detection cameras to stop illegal mobile phone use.”

Camera from three companies will be used, but the majority are expected to look like these units located on Anzac Parade, Moore Park. 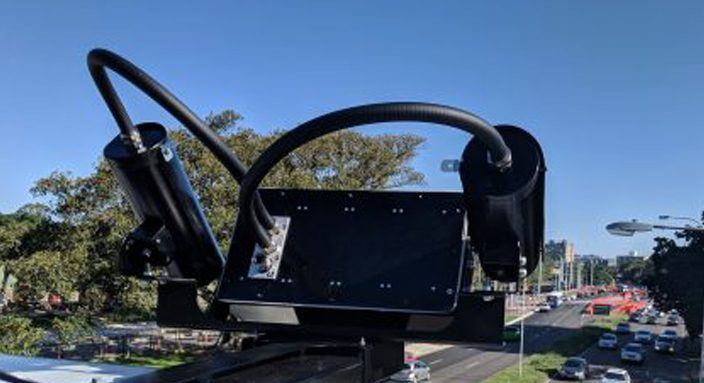 UPDATED 1/12/19 - NSW law enforcers have activated the first batch of mobile phone detection cameras in undisclosed locations throughout the state.

The cameras, which were developed in Australia and are the first of their kind in the world, have been on trial for almost 12 months.

Ten fixed and transportable cameras will commence operating at locations across the state, according to Transport for NSW.

"Coupled with ongoing enforcement by NSW Police, these cameras will target illegal mobile phone use anywhere, anytime," read a statement from the government body.

While the location of the cameras is a secret, it's known that there is a camera on the Sydney Harbour Bridge, while other mobile phone camera locations include Nowra, Lucas Heights, Moore Park and Prospect.

Warning letters relating to camera-detected offences will be issued for the first three months, but the penalty for offending drivers will increase from four to five demerit points (from a total of 12), while a $344 fine ($457 in a school zone) will also be applied.

The penalty jumps to 10 demerit points during double-demerit periods.

Almost 1000 drivers a day were being captured using their mobile phones while behind the wheel during the phone detection camera trial in Sydney.

Incredibly, all of the drivers were sprung at just two locations, on the M4 motorway at Prospect and at Anzac Parade, Moore Park (below).

According to 9News, the high-resolution cameras captured 20,125 cases of illegal phone use in the first 25 days after the trial began on January 7.

These included a driver holding a phone in each hand, and appearing to text on one of them while lightly holding to the steering wheel with his other hand.

Another image showed a driver with both hands on his smartphone held close to his face, while his passenger held on to the steering wheel (below).

The cameras also captured a woman with both hands on her phone while the steering wheel remained untouched.

Luckily for them, no fines were issued during the three-month trial.

MORE$1000 fines for illegal mobile phone use in Queensland

If each driver detected so far was slapped with a $337 infringement, those two cameras alone would have earned the state $6.8 million over just 25 days.

The system uses high-resolution cameras to snap photos of each car, with artificial intelligence then sorting through each image to see if a phone is being used by the driver.

The cameras are said to work in both day and night time, in poor weather, and can detect vehicles travelling at up to 300km/h.

They’re the high-definition cameras that can see right into your car and capture evidence of you using your mobile phone at the wheel. #9Newshttps://t.co/P1lSE4sib5

A human operator then validates images that indicate a positive result.

Unless NSW drivers change their behaviour the state government is expected to reap a significant windfall with the new technology.

Last financial year, around 40,000 fines were issued for illegal mobile phone use without the benefit of the cameras. Interestingly 30- to 39-year-old drivers were the main offenders, receiving more than a quarter (11,695) of the fines.

But the NSW Department of Roads and Maritime Services insists that the cameras are not about revenue raising.

MOREDrivers use phone in almost nine out of 10 trips

“74 per cent of the NSW community support the use of cameras to enforce mobile phone offences. I strongly believe this technology will change driver behaviour and save lives,” said the minister for Roads, Maritime and Freight, Melinda Pavey.

Both Western Australia and Victoria are also examining phone-detecting camera technology – though not necessarily the same tech adopted by NSW, which is developed by Australian start-up Acusensus.