The Ford Mondeo is a cracker, and raises the mainstream medium car benchmark.

The new Mondeo is a window into Ford Australia’s Falcon-less future; positioned as, “The flagship car in the showroom”, and likely to be the biggest conventional car in the blue oval range once Falcon production finishes in October next year.

More than 4.5 million Mondeos have been sold globally since the nameplate debuted in 1993, and this all-new, fourth generation model is offered across three spec levels (Ambiente, Trend, Titanium), as a hatch or wagon, with a choice of two turbo petrol engines, and a single turbo diesel.

As the name implies, it’s again intended for world markets (badged Fusion in North America), comes loaded with technology, and sits at the leading edge of Ford design.

Given its historical success in high-volume fleet sales, Toyota’s Camry dominates the local medium car segment, with Mazda’s 6 in a distant second, heading a gaggle of contenders fighting over share in a segment gradually diminishing in the face of Australian new car buyers’ on-going SUV love affair.

But Ford says it isn’t content with the Mondeo knocking off the Mazda6 for ‘best of the rest’ status. It’s taking aim at the mid-size Camry mother-ship, and claims to have pulled out all stops on dynamic performance, standard features, and value-for-money to take a crack at it.

The new Mondeo might share the same wheelbase measurement as its predecessor, but that’s largely where similarities end. Even ‘carry over’ elements like the 2.0-litre TDCi turbodiesel have been substantially upgraded, and the car introduces several market firsts.

Chief among them is ‘Pre-Collision Assist with Pedestrian Detection’ which uses data collected from a windscreen-mounted camera and radar in the bumper to recognise pedestrians on either side of the road. The system is then able to sense if a pedestrian is likely to step in front of the moving car, giving the driver an audible and visual warning if and when they do.

If the driver doesn’t respond, the system pre-arms the brakes (reducing the gap between pads and discs), and if there’s still no driver response the brakes are applied automatically.

Ford’s Inflatable Rear Seatbelt tech is also standard across the range. In a crash the belt behaves like an airbag, rapidly expanding to disperse impact forces across a body area five times broader than a conventional belt.

Plus the ‘MyKey’ feature recognises different keys for the same car, allowing specific vehicle setting for alternate keys. For example, parents can program a key that limits top speed, reduces maximum audio volume, disables the radio until the seatbelts are fastened, or prevents deactivation of the driver assistance safety tech. 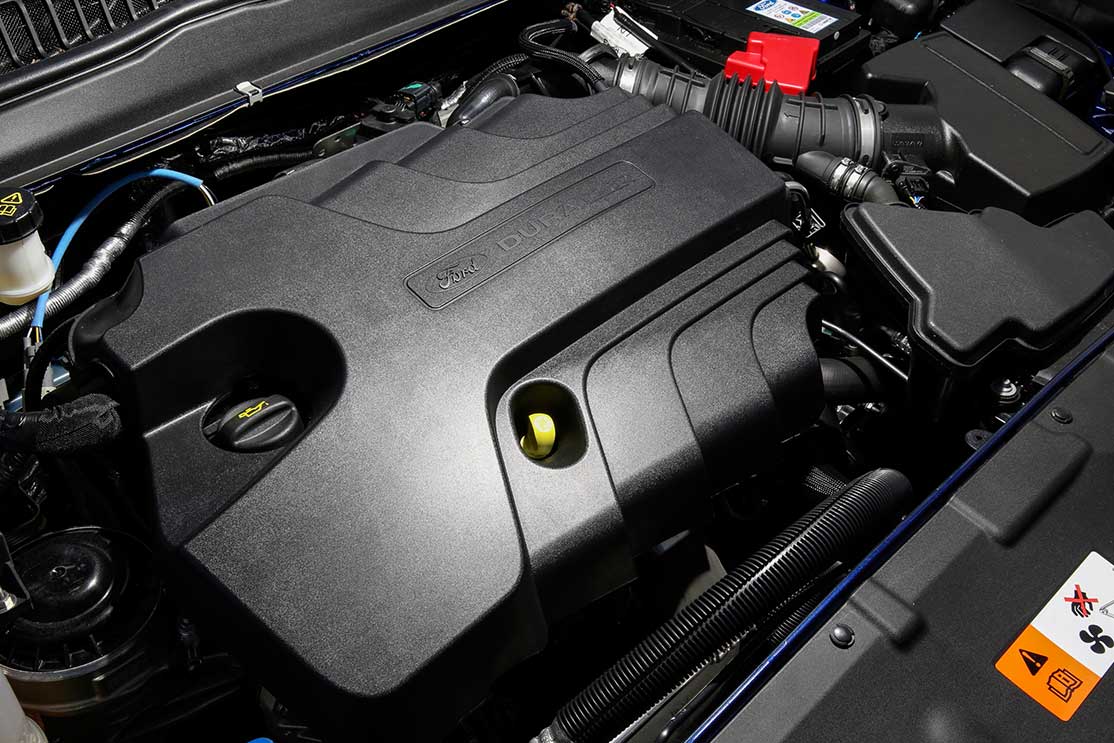 A lengthy launch drive in and around our nation’s capital gave us the chance to sample all model variants and engine types. And the short story is the new Mondeo is brilliant.

Ford has managed to combine sublime handling and dynamic response with silky smooth ride comfort and impressive performance. The competition should be worried.

This car simply eats up open road kilometres, its supple suspension, helped in no small part by a new ‘Integral Link’ set-up at the rear, absorbing irregularities as well or better than cars several rungs higher up the prestige ladder.

A base 149kW/345Nm version of the 2.0-litre turbo petrol engine is only available in the entry-level Ambiente, and it combines sharp acceleration with impressive refinement. Shifts from the standard six-speed auto are fluid, while steering response and feel are exceptional.

The Ambiente hatch runs on 16-inch alloys shod with 215/60 tyres, and the wagon steps up to 17s and 235/50 profile rubber. Cornering grip is tenacious, the front end sticking to a chosen line even under extreme pressure, with the back end remaining secure all the way through.

Ford has used seven different types of steel in the Mondeo depending on the requirement for strength and/or lightness. Close to two thirds of it is high strength, and the tailgate on the wagon is magnesium! The resulting strength and torsional rigidity delivers outstanding overall body control, even on the base car.

The 132kW/400Nm turbo diesel, matched with a six-speed dual clutch gearbox (with paddle shift) is torquey and refined, but can’t match the urgency of the 177kW/345Nm top-spec petrol. It’s the pick of the drivetrains, and although it produces the same peak torque number as the lower powered version, that maximum is available earlier and lasts longer (2700-3500rpm v 2300-4900rpm).

Ford claims 0-100km/h in 7.9secs for the 177kW petrol and 8.6secs for the diesel, adding a tenth to both numbers for wagon versions. 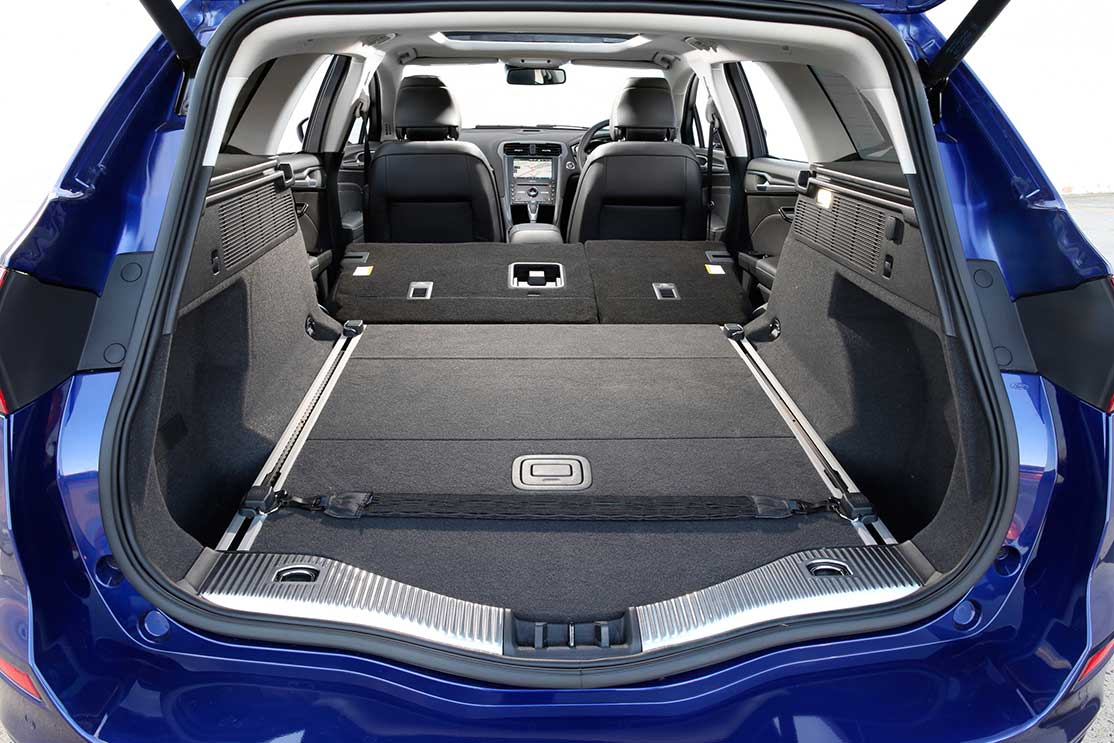 The Mondeo is a full five-seater with plenty of head, shoulder, leg and foot room in the rear. The front seats are supremely comfortable, and the rears offer a generous amount of sculptural support.

Cabin design is restrained and premium, with an eight inch colour infotainment touch-screen prominent in the centre console. Switchgear is neat and minimalist, yet all models feature music and phone connectivity down to six decimal places, including two USB ports, an SD card slot, RCA cable inputs and Bluetooth streaming. Noise suppression is excellent, with normal conversation effortless at all times.

Ford’s SYNC2 system provides voice command functionality for everything from sat-nav or air-con instructions to music choices and phone calls.

Cargo space is generous in hatch and wagon, with the rear seat folding close to flat in both. The wagon also picks up load-levelling suspension as standard.

The top-spec Titanium rides on 18-ich alloys which look great, but ride compliance isn’t as sweet as the Trend on 17s. And at the other end of the range, rear seat passengers in the Ambiente miss out on an arm rest and dedicated air vents. Pennies have definitely been pinched there. 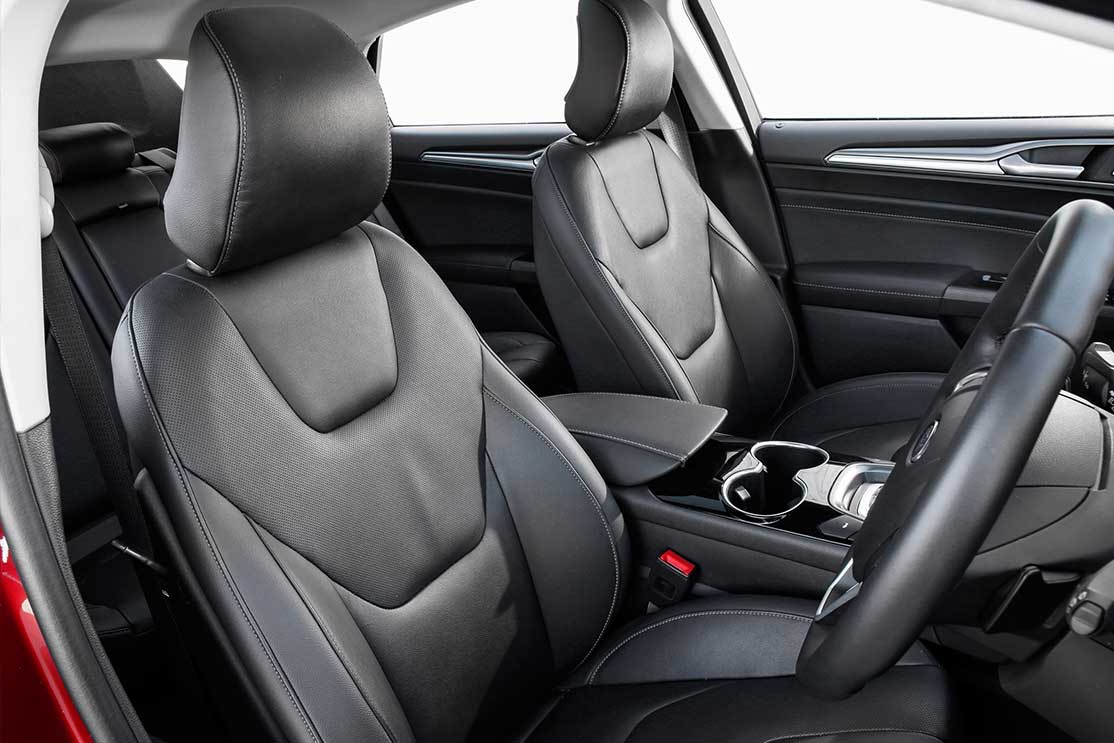 Ford expects Mondeo sales to be split equally between the three variants, with roughly 70 percent hatch to 30 per cent wagon. All deliver sharp value for money.

Would you take the Ford Mondeo or Mazda6?

The new Mondeo’s arrival demonstrates yet again how quickly the car game moves on. Its dynamics are class-leading, performance is strong, and value-for-money is hard to beat. It’s the Ford by a short half head. 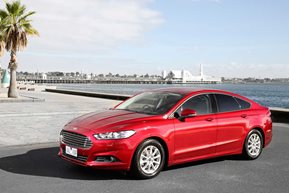