NOW in its 10th year, Adelaide’s All Japan Day has become a summer institution, dishing up chrome, stance, zip-ties and ridiculous conversions in equal measure. Wigley Reserve in Glenelg is often sundrenched and kissed by a sea breeze, but at this year’s All Japan Day the grass was sweat-drenched and kissed by mini-trucks laying rail. Oh, and the ‘day’ was actually a whole weekend!

Yep, such is the event’s popularity, organiser and Iron Chef Imports owner Kristian Appelt and his team extended the 2018 show across the whole weekend. A third of entrants had such a great time that they attended both days, their fees and food purchases helping raise $7500 for Novita Children’s Services.

“The jury is still out if we stick to the two-day format,” Kristian said. “We might split it into classics and modern next year.” Whether your passion is classic or plastic, Chef is sure to serve up something you’ll enjoy. 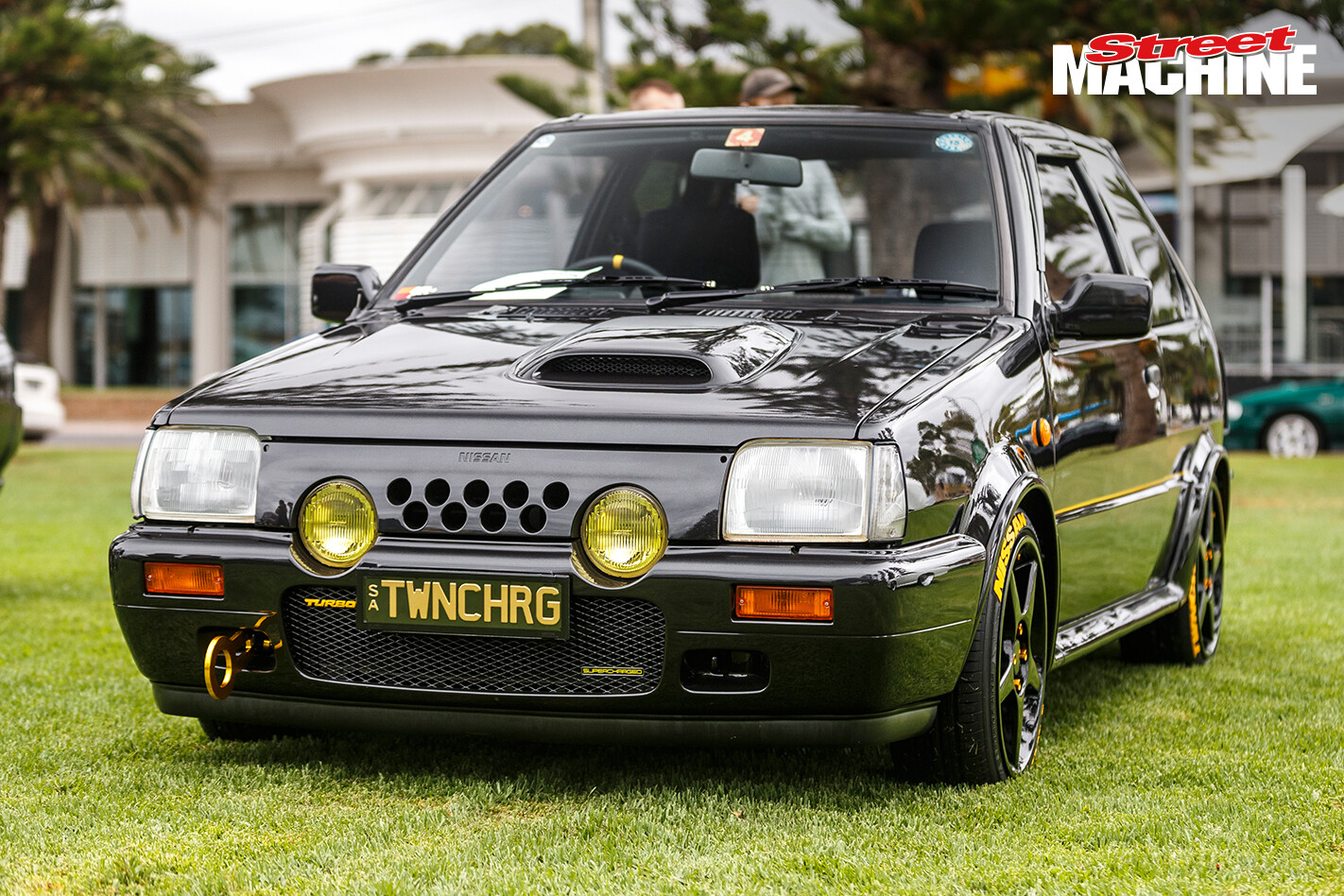 Unsure if your crate motor deserves a blower or a turbo? Like the taco girl says: “Why don’t we have both?” The Nissan March Super Turbo packs one of each, strapped to a 930cc four-pot. If it sounds insane, that’s because it is, but it’s good for a 15.5sec quarter, which ain’t slouching around for a sub-1.0-litre screamer! Lachlan Price’s Bedford Isuzu Elf came from Japan, but was sold new through now-defunct Holden dealer Freemans. It runs a 1584cc OHV petrol motor and drives like a new one. Lachlan’s still not sussed out if the colour is ‘SA Brewing Blue’, given these jiggers delivered West End beer back in the day, or if it’s ‘sabrewing blue’, named after a type of bird. 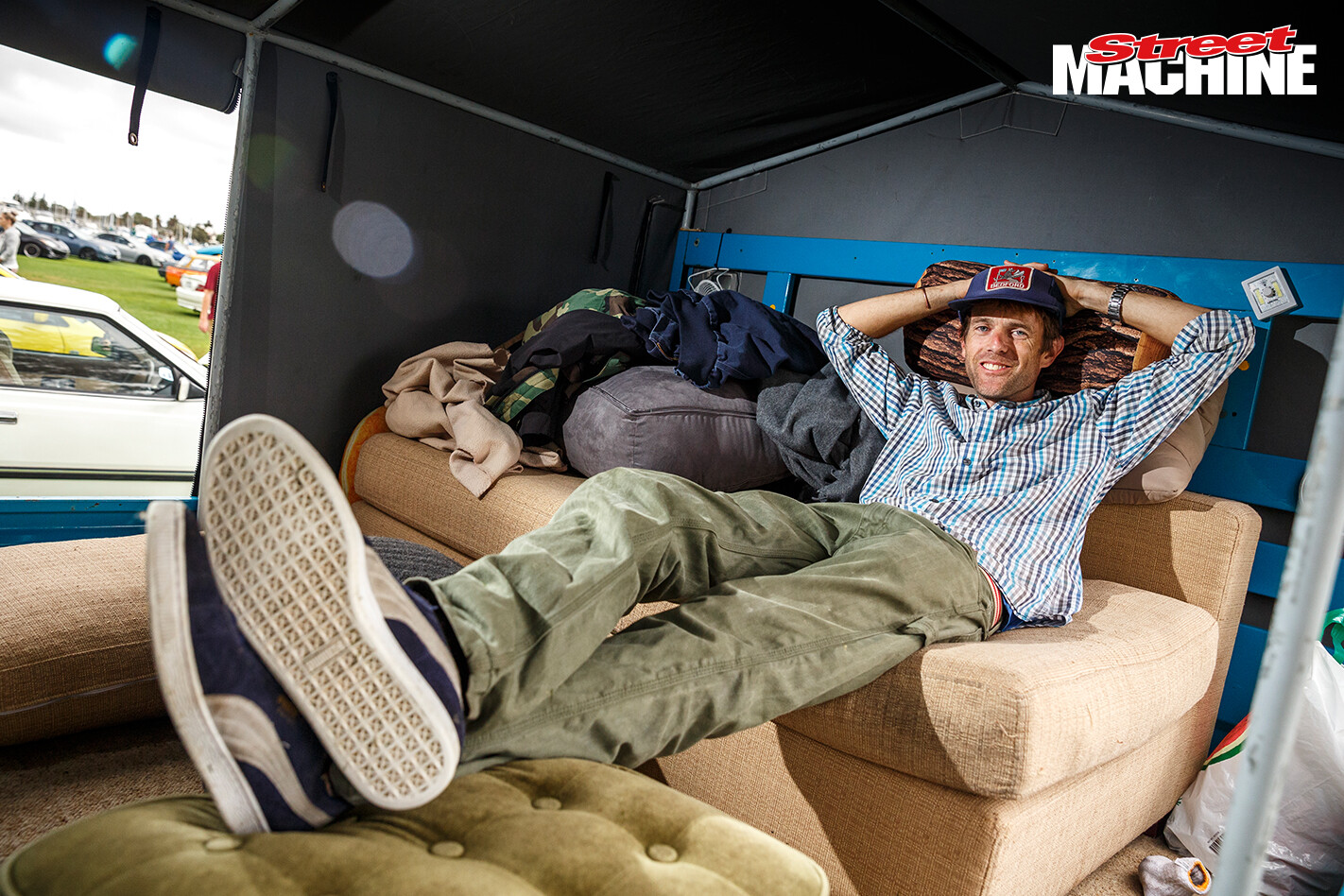 Home away from home! Lachlan’s mint Elf came with a sturdy canopy and frame, so he plonked a couch in the back for those lazy beachside Sundays. The Daihatsu New Line dates back to 1963, and is exactly as small as it looks. Owner Todd Swanson got onto it thanks to his unnatural love for Daihatsu Moves, so when it popped up on Facebook he put his hand up for it. He didn’t have the 800cc four-banger running for the show, but when he does he’ll be lining up those fancy kids in their enormous Suzuki Mighty Boys! Honda sold two versions of the N-series here, the export-only big-block N600 and the kei-compliant N360. Ben Davis’s nanna had one of these back in the day, identical right down to the Tawny Yellow duco and 354cc twin-cylinder tiddler. These things used to get around, but Ben attests there’s only two left on the road in SA – one of each variant. Is that an LS I see before me? Steve Magrin’s skid-tastic Datsun 1200 coupe fits 5.7 litres of the General’s tasty LS goodness under its tiny bonnet, backed by a Turbo 400 and – wait for it – a stock Datsun 1200 rear end. “It was fine until I powerskidded the drag strip at Whyalla,” Steve explained. The prepped track saw him pop an axle, but with an ample spares cache, this wasn’t a problem. “Hopefully, we’ll tub it and install a HiLux diff soon, but if not, I’ll just chuck another stock one up there,” he said. 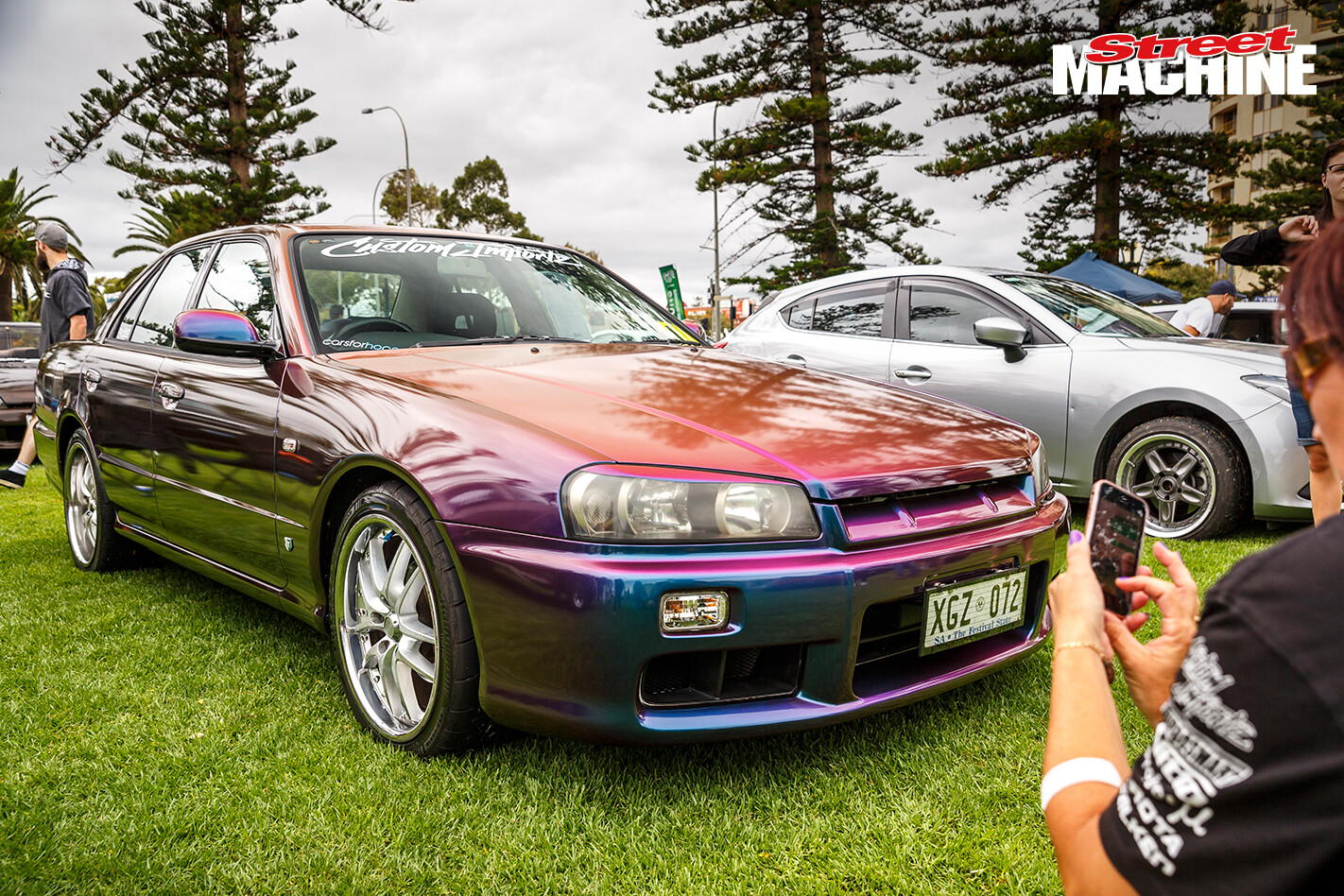 For those that don’t get ‘new cars’, just remember that Eden Bastian’s learner-legal 1999 R34 Skyline is three years older than she is! When you’re on your L-plates, you’ve got to be savvy with mods, so Eden has limited it to a cyan/purple Rushing Riptide wrap. “Kanedge.Signs.Wraps did the work,” Eden said. “It made me cry when I saw it half-disassembled; it looked like it had been in a fight! But I knew it was for a good cause, as I wanted something different. I’ve always liked the drift scene, so just having a Skyline that is mine is awesome.” The VK Group A is a very different beast to a base-model Commodore SL; so too is this machine from Nissan. Show organiser Kristian Appelt’s R34 Skyline GT-R V-Spec II N1 is one of only 18 built for homologation purposes and one of two with an R1 conversion by Nismo. 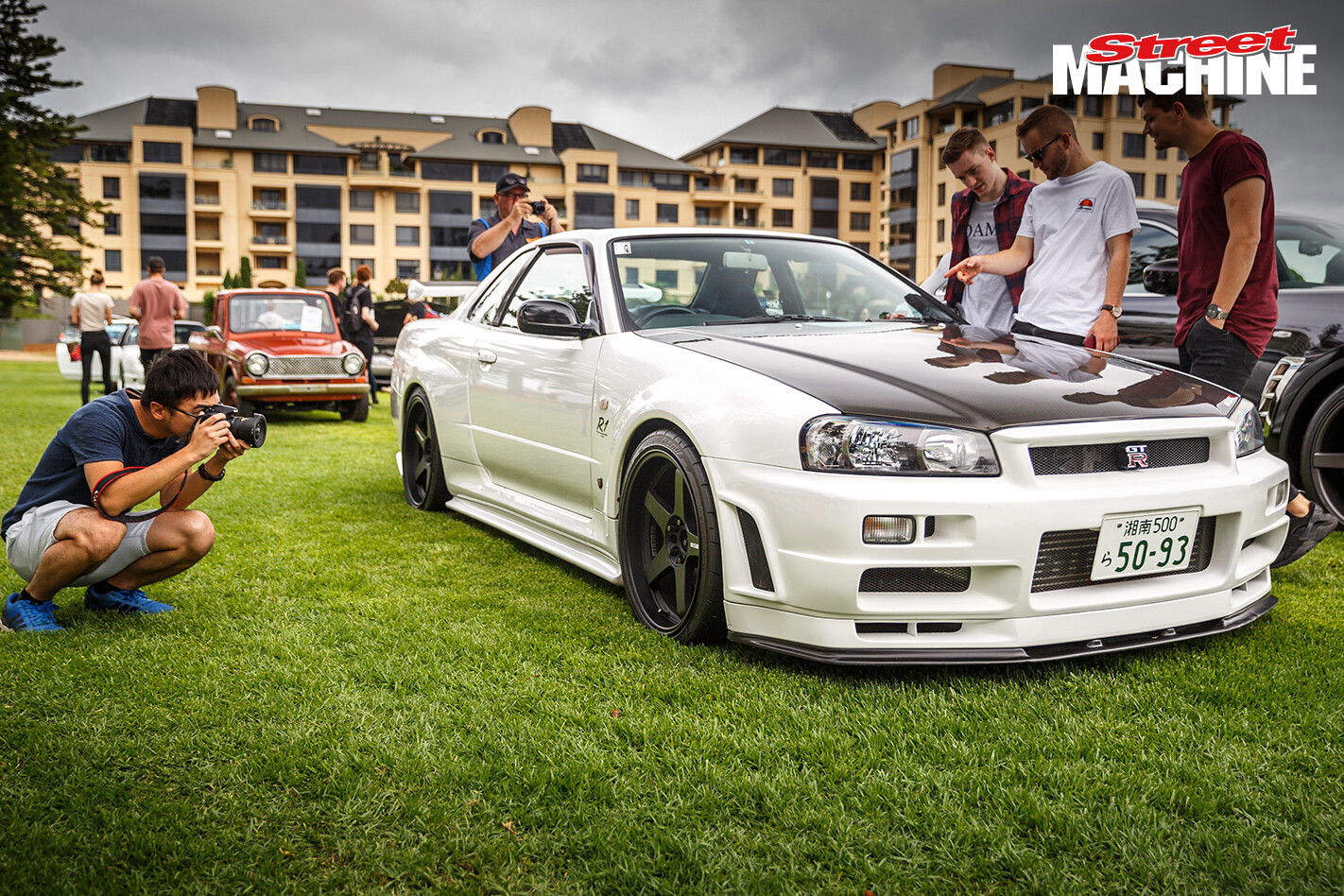 Kristian’s GT-R V-Spec II N1/R1 is one of those less-is-more kinda cars, with Nissan ditching the air con, audio, rear wiper and even the glovebox light, then coating the lot in ultra-thin Crystal White paint. Under the bonnet though, more is more, with the RB26DETT having copped a unique N1 block, ball-bearing turbos and a bunch of other Nismo goodies. Of course, like every JDM performance car of the 1990s, power is ‘limited to 206kW’. LOL! Pull the other one, Nissan! There was a time when the fantastically named Mazda Bongo ruled the Japanese one-box van world, but when was the last time you saw one? 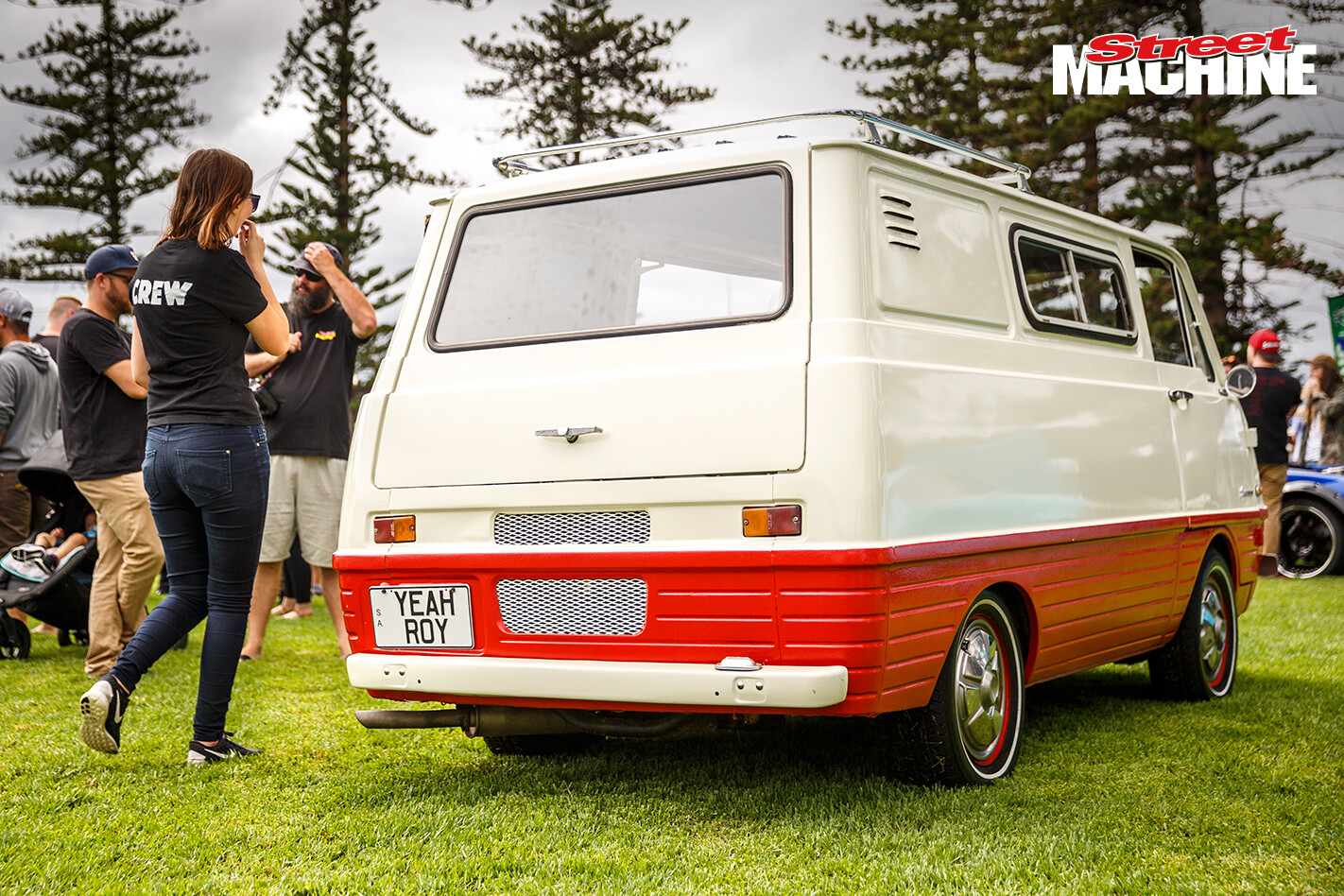 Daniel Underwood loves his Bongo and was so committed to saving it, he bought it twice! “The first time was off Gumtree for $300,” he explained. “I cut all the rust out, but I didn’t have room to keep it, so I swapped it for a couch.” A couple of years later, he hit up his mate and bought it back again, getting it on the road just in time for his wedding. “It was a sick couch, though!” If all this Japanese stuff is making you cry into your ramen noodles, let us not forget that our late, lamented Aussie car industry was strongly represented at the All Japan Day, as always. This immaculate 50th Anniversary Nissan P910-series Bluebird was built at the Clayton factory that formerly punched out Volkswagens and until January 2018 did final assembly on Elizabeth-built HSVs. “I know a couple of guys with Crown wagons,” said Tamas Craske, “so when I came across this ute on Gumtree, I knew I needed it. Then I started pouring money into it!” It had been off the road since 1994, so Tamas had the 2M six-pot rebuilt with 20thou-oversized pistons, then gave the brakes his full attention. 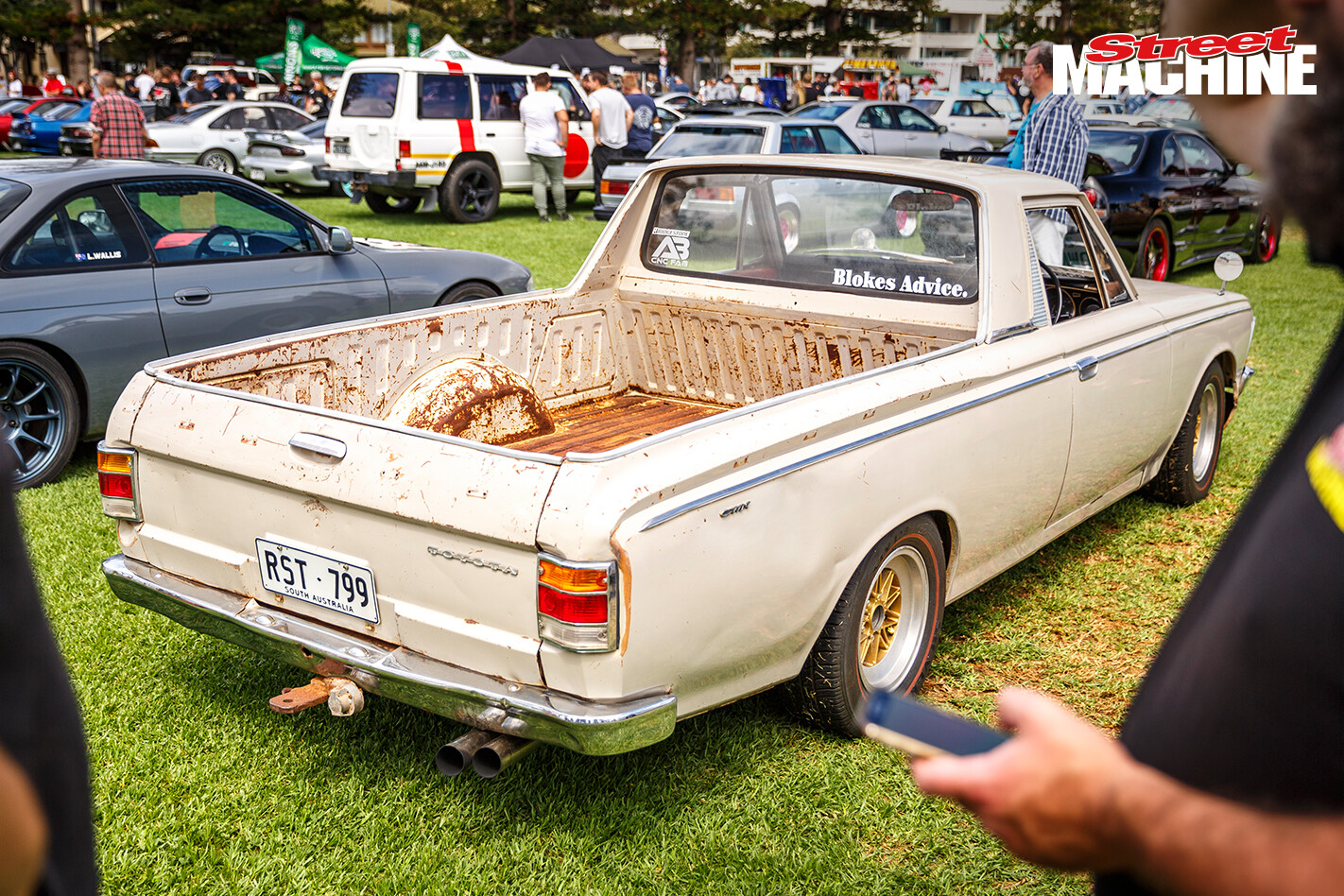 “These were more expensive than your average Ford or Holden ute; a bit more upmarket with all the chrome and stuff,” Tamas told us. “The big selling point was this six-foot tray.” He’s not wrong; it swallowed his mate’s Honda Grom with ease. 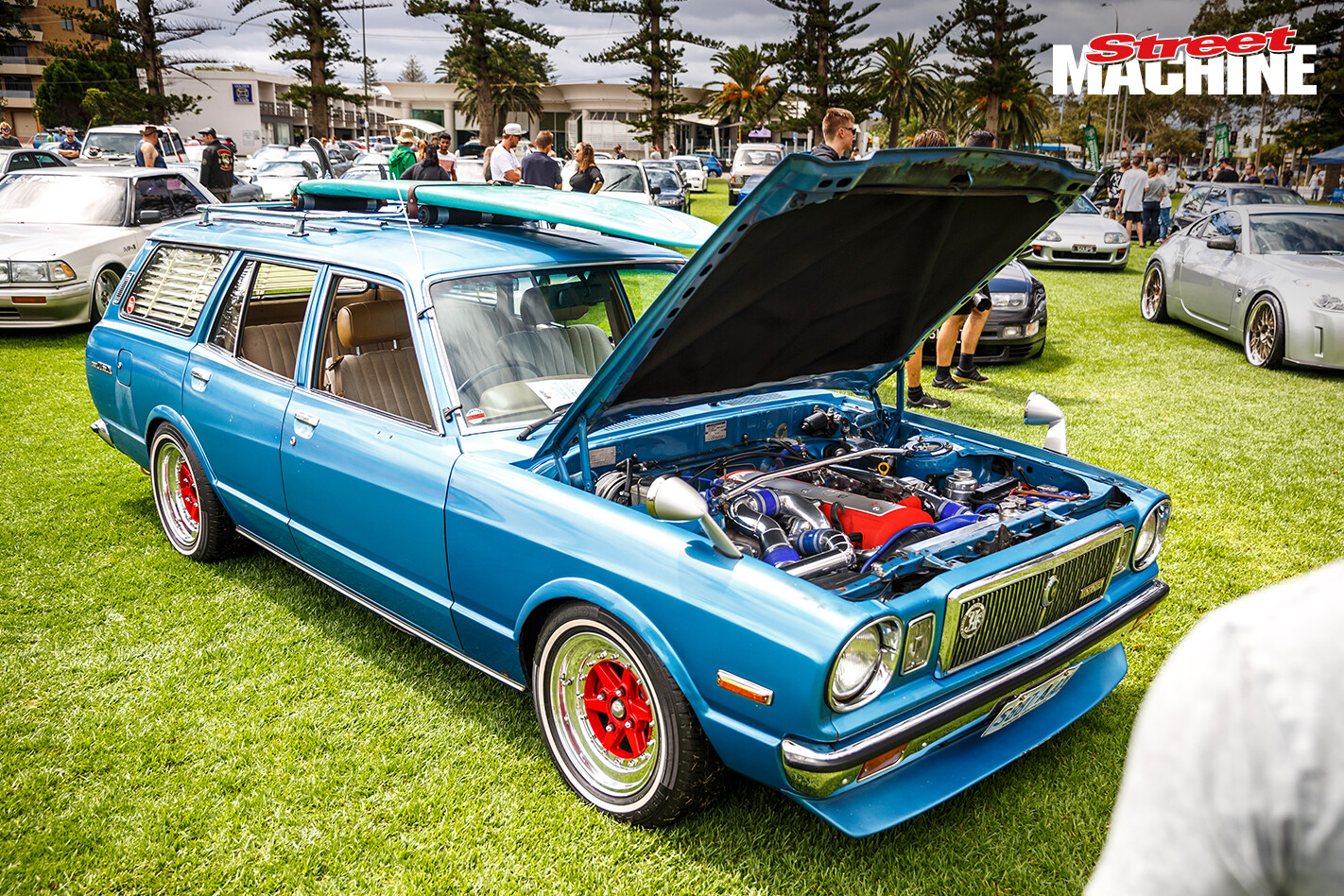 It’s been a while since anyone has spotted a twin-turbo, triple-rotor 20B-powered Mazda Cosmo. These were the first car to get a touchscreen to control the climate, in-built mobile phone, GPS, TV and radio. They could shift pretty well despite weighing a hefty 1640kg and using all the fuel while doing so. Only around 3500 were built and they were never sold outside of Japan, so you can bet their complexity has seen more than a few go to God! This unique colour scheme is apparently factory! This car is one of 10 peripheral-ported lightweight Allan Moffat Specials sold in the early 80s. They were imported for Group C racing, but Toyota racer Peter Williamson filed a complaint to CAMS as he felt the peripheral porting in the engine didn’t truly represent the cars available on the Aussie market – despite Willo himself racing a JDM-only twin-cam Celica! Sweet 1969 Isuzu Florian is currently the only one on the road in SA and one of a handful that survive Australia-wide. These were delivered new in 1968 and 1969, just as the local Isuzu dealer network was collapsing. The model returned to Aussie shores in 1973 via Holden dealers, albeit with updated sheet metal, a full chassis and in ute-form only as the Chevrolet LUV.