GEELONG’S All Ford Day is always a massive event. This year, the show attracted 1400 cars and over 7000 punters to the Deakin University grounds. We’ll have a full story in the mag soon, but for now here are 20 of our favourite cars from the show and a massive gallery of Blue Oval awesomeness to perve on! 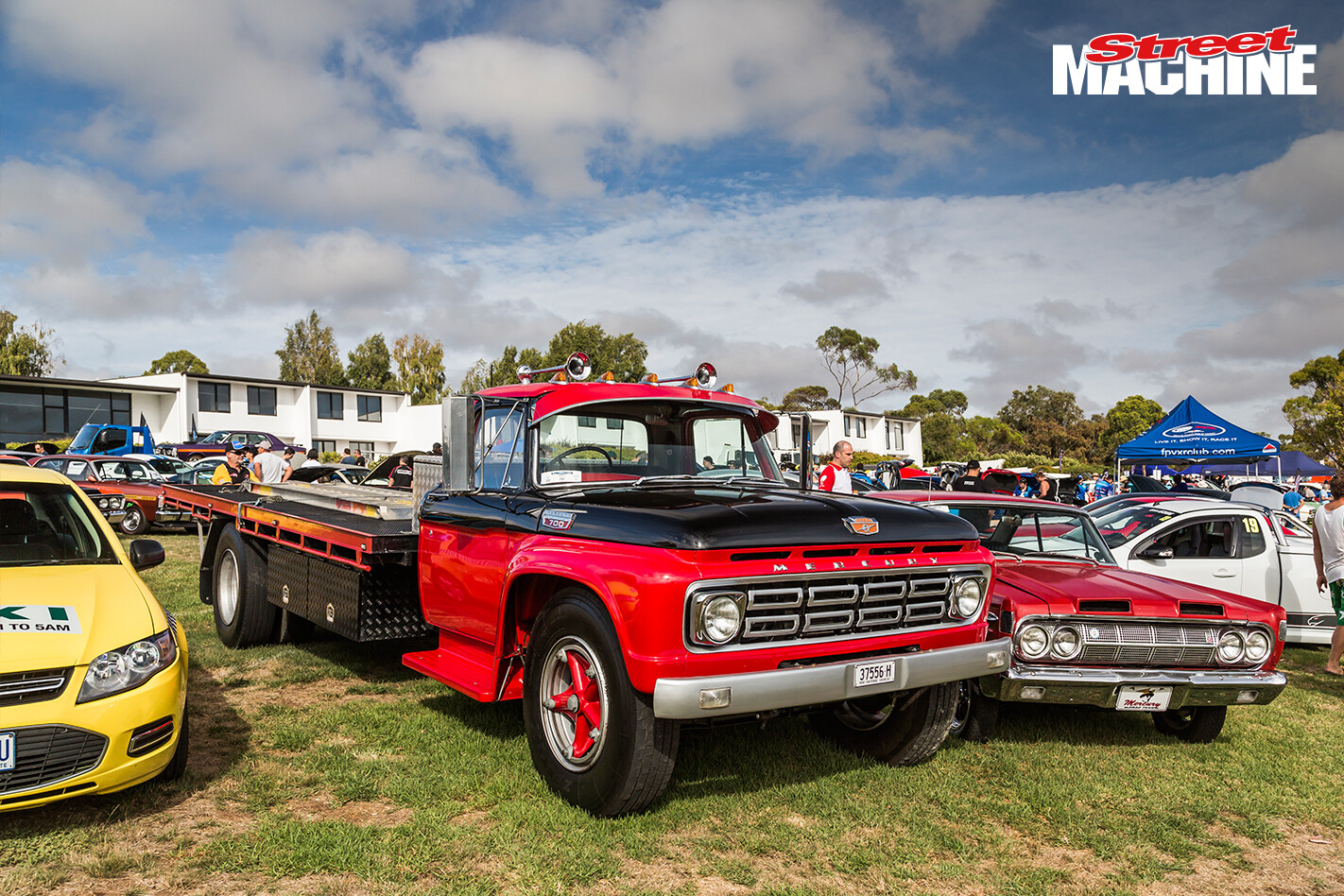 John Kerr brought his famous ’64 Mercury Comet down from Sydney on the back of his M700 Mercury truck. The truck is a fascinating piece of gear, powered by a Paxton-blown 361 FT motor – essentially the truck version of Ford FE big-block. John has recently added throttlebody-style MSD EFI into the mix, and reports better top-end pulling power, and improved fuel economy too. This slick XB Fairmont hardtop belongs to Wayne Johnston, who brought the car down from NSW. Metalflake paint and 15x8 and 15x10 Minilite-style rims make it stand out from the sea of other tough Falcon coupes on display at the AFD. 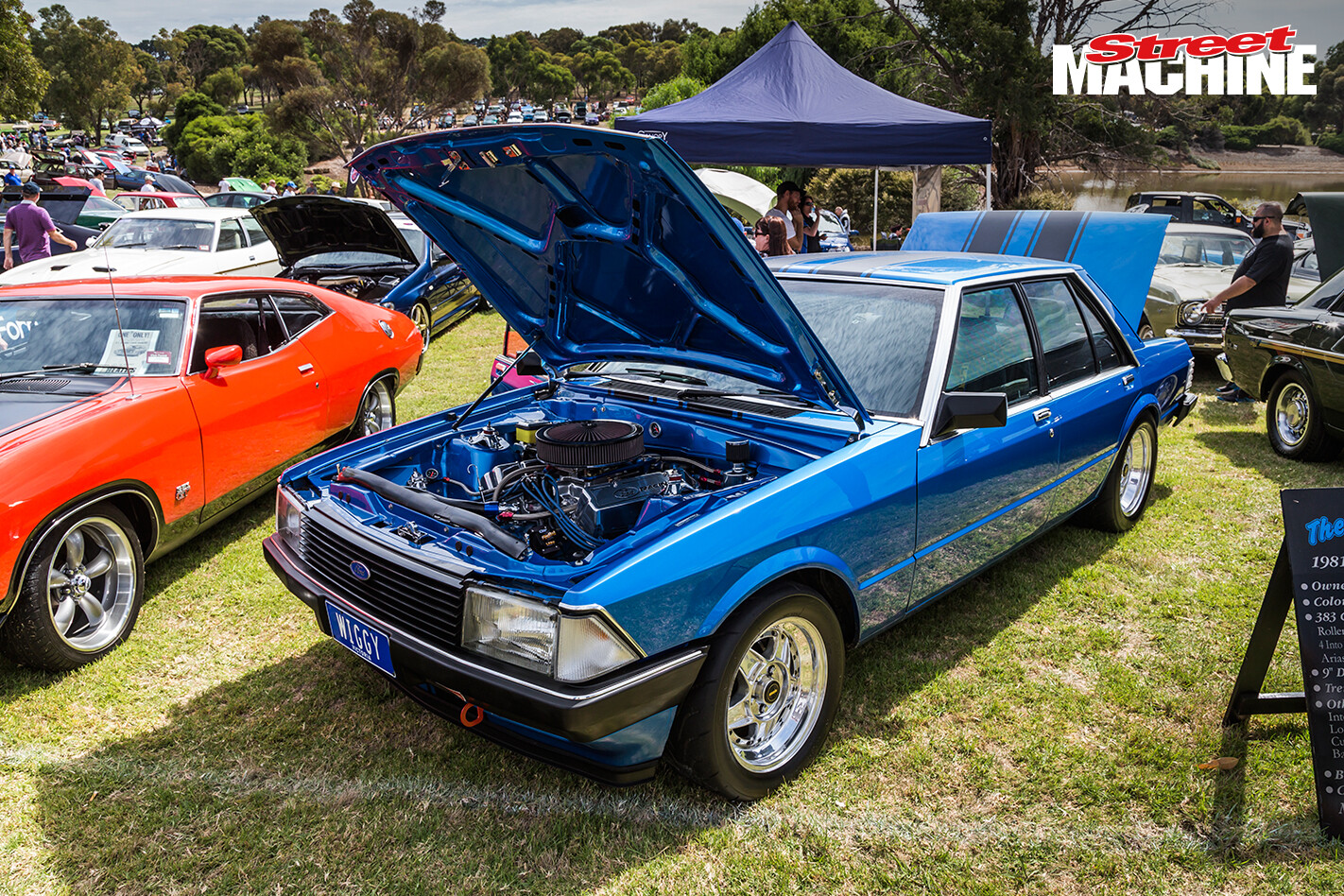 Scott Wiggett’s ‘Wiggymobile’ XD has been around for decades, much longer than the nine years that I’ve religiously attended AFD! It’s running a warm 383 Clevo backed by a TKO and nine-inch, all wrapped in that ruler-straight XD Fairmont body. The old-school Simmons rims and fat sticky rubber are an indicator of the car’s handling prowess. Twelve years of Shaun Besim’s hard work has resulted in this super-clean EB. The injected 5.0-litre was treated to a few goodies to warm it up and drenched in black before it was slotted into the smoothed engine bay. The wheels are staggered 20-inch Simmons FRs, and the interior is swathed in modified Cappuccino leather from an EL Fairmont Ghia. Oh yeah, that retina-scorching colour is a special brew that Shaun has dubbed Ultimate Green! 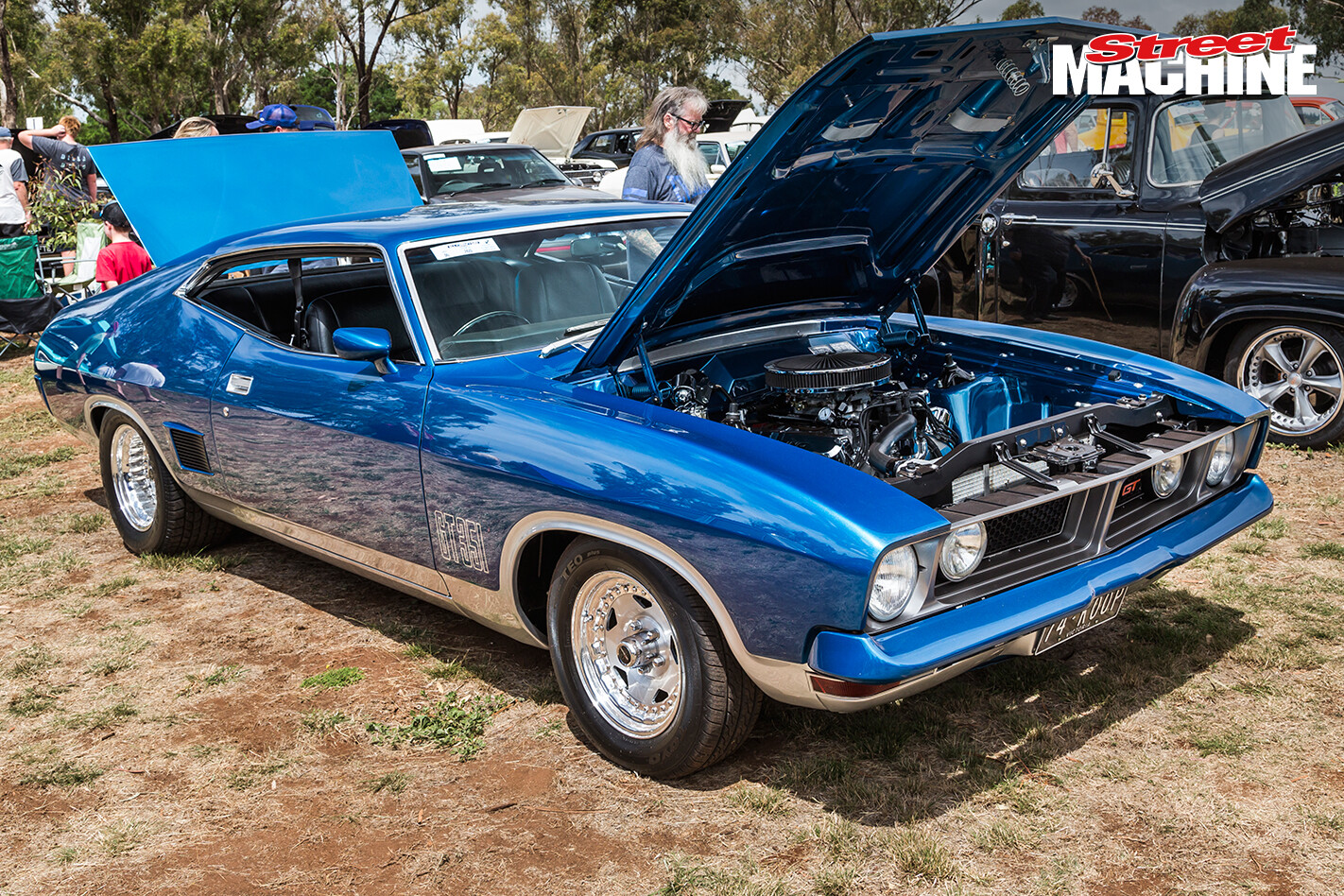 Kim Argaet’s XB hardtop is a stunner, with loads of subtle body mods and stunning paint. Power is provided by an alloy 427ci small-block Ford. Full feature in the April edition of SM! Would you believe this XL Wagon is Craig Mansfield’s first modified car? It is, and it was built and painted in the shed! The whole driveline was donated by an EB, but the motor copped a few choice upgrades and pushes 228hp through the BTR four-speed auto. The burnt orange paint was picked out of the Toyota catalogue, while the custom interior was all designed by Craig’s wife Emma. 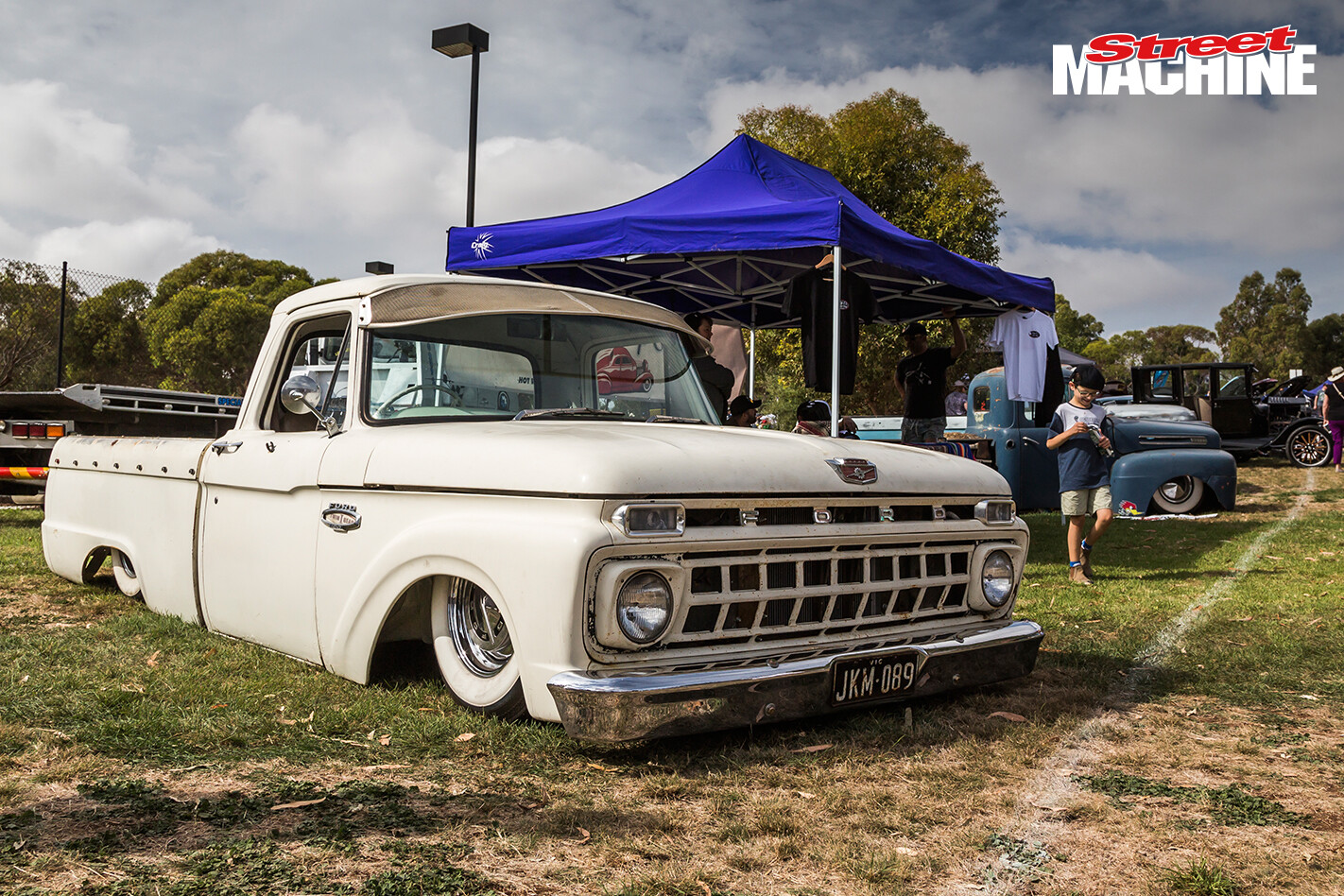 Matt Dietrich’s recently completed Moby Dick ’65 F100 adorned the Big L’s Chop Shop stand. The chassis magic was done by Leon Davies at Big L’s, and includes a Jag front end, four-link rear and airbags all ’round. The engine is at this stage a stock 302 Cleveland, backed by a C4 trans and Geelong Differentials nine-inch. “It was a driver; we just put it on the hoist for a roadworthy check and, yeah...” laughed Jayden Mizzi at how far his immaculate ’84 XE ESP has come. One six-year restoration later, the title of Best Overall Ford was handed to him at the AFD. The car is in concours condition, right down to the 30-year-old Uniroyal Wildcat tyres that Jayden managed to dig up for it. Ken Sandem is the justifiably proud owner of this righteous 1964 two-door Compact Fairlane. The car sports a set of tubs, big ’n’ littles pinched from two of Ken’s other cars, and holy-grail patina. Motivation comes from the original 289 Windsor for now, but there’s a ProCharged Dart-based 427 ready to be slotted in to back up the ample external attitude. Mal Schoch’s Barra-powered Lincoln Continental recently had its first blast down the Calder Park quarter-mile and ran a storming 13.1-second pass. Mal is going to redo the rear end with some Gazzard Brothers goodies, fit some bigger rubber and come back for more! The big Lincoln also won the Best Powered By Ford gong at the AFD. 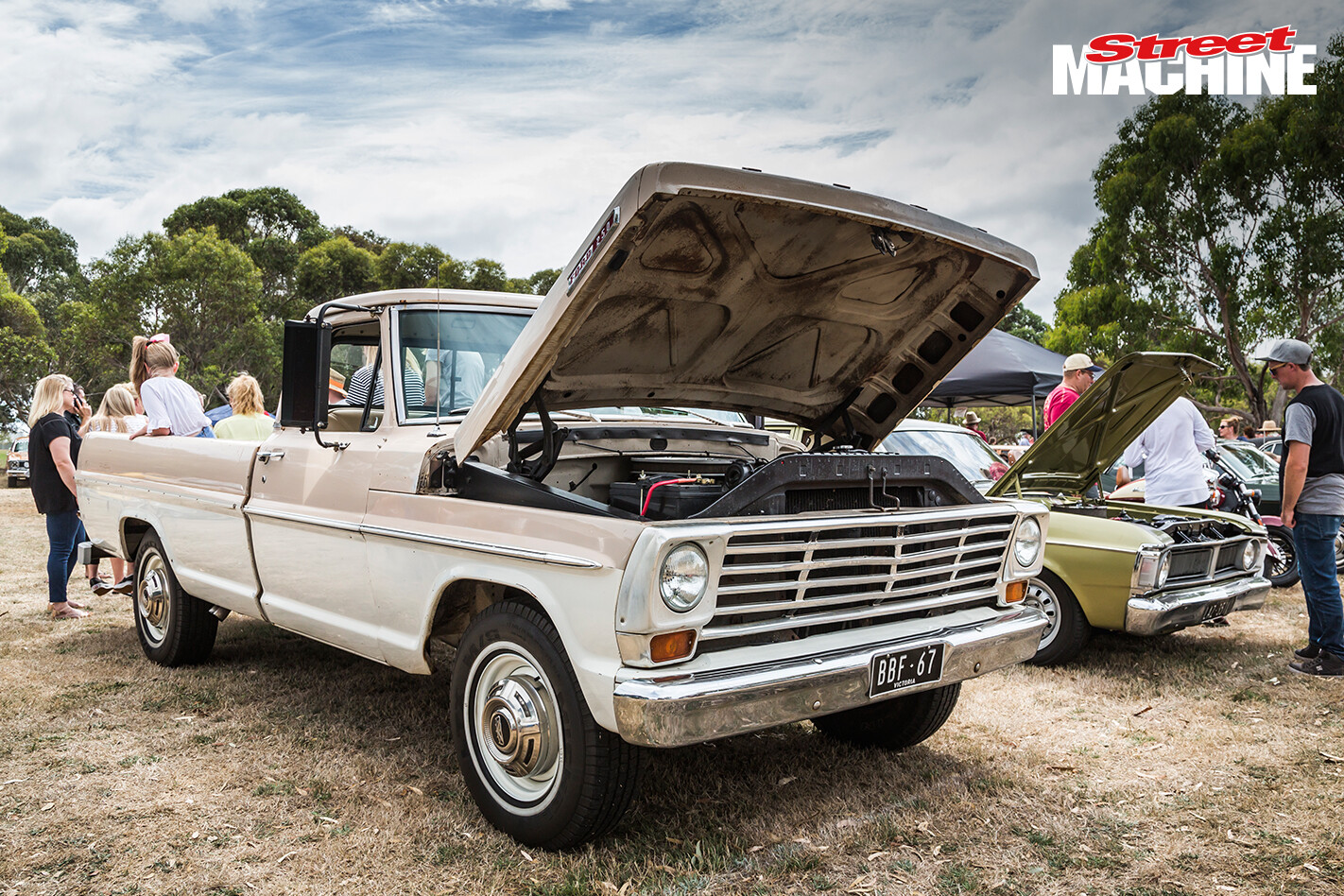 Lucky’s sweet truck hides something with a bit more punch than the original 352 – a 428 Cobra Jet with ported heads, decent cam and a ridgy-didge Holman Moody intake. The 428 sends power through a C6 to a built Dana 60 with a Grizzly locker, custom axles and floating hubs. It’s normally used to ferry dirt bikes around, but at the AFD it was the gathering point (and seating) for Lucky’s friends and family. Jason’s XB coupe sports a rare mod – it’s a targa-top. The rear windows have been replaced with steel panels, the roof was braced and the chassis has been reinforced with box tubing. The original owner had it done professionally in the mid-80s, and Jason took it off his hands six years ago. Running gear is standard GT stuff, and the bright red paint is set off by a set of fat hotwires. We featured Alex Moshopoulos’ ballistic Quicksilver XY in the February 2018 edition of Street Machine. The beast’s neat exterior is hard at work trying to disguise the ’cage and enough boosted 411 Windsor to run well into the eights! Deb and Mal Margetts have been showing their immaculate Tickford T3 TS50 at AFD for many years now. Their hard work has resulted in a pile of Best Tickford AU trophies, though it was knocked off the top spot this year by Chazz Hart’s custom TE50. The T is mostly standard aside from the colour-matched Blueprint engine accents, but it’s been detailed to the nth degree. Simon Piper’s mad little ’82 Laser is a bit of a handful on the road and at the track. The original motor has been swapped out for a built B6D with Carrillo rods, custom forged pistons, big cams, oversized valves and a lot of port work. Carburettion is taken care of by a quartet of Kawasaki ZX6R carbs on a homemade manifold, but there’s a bigger set ready to go on soon. Simon races it in the Victorian Hillclimb Championship, and took the class win at Geelong Revival last year with a 43-second run. 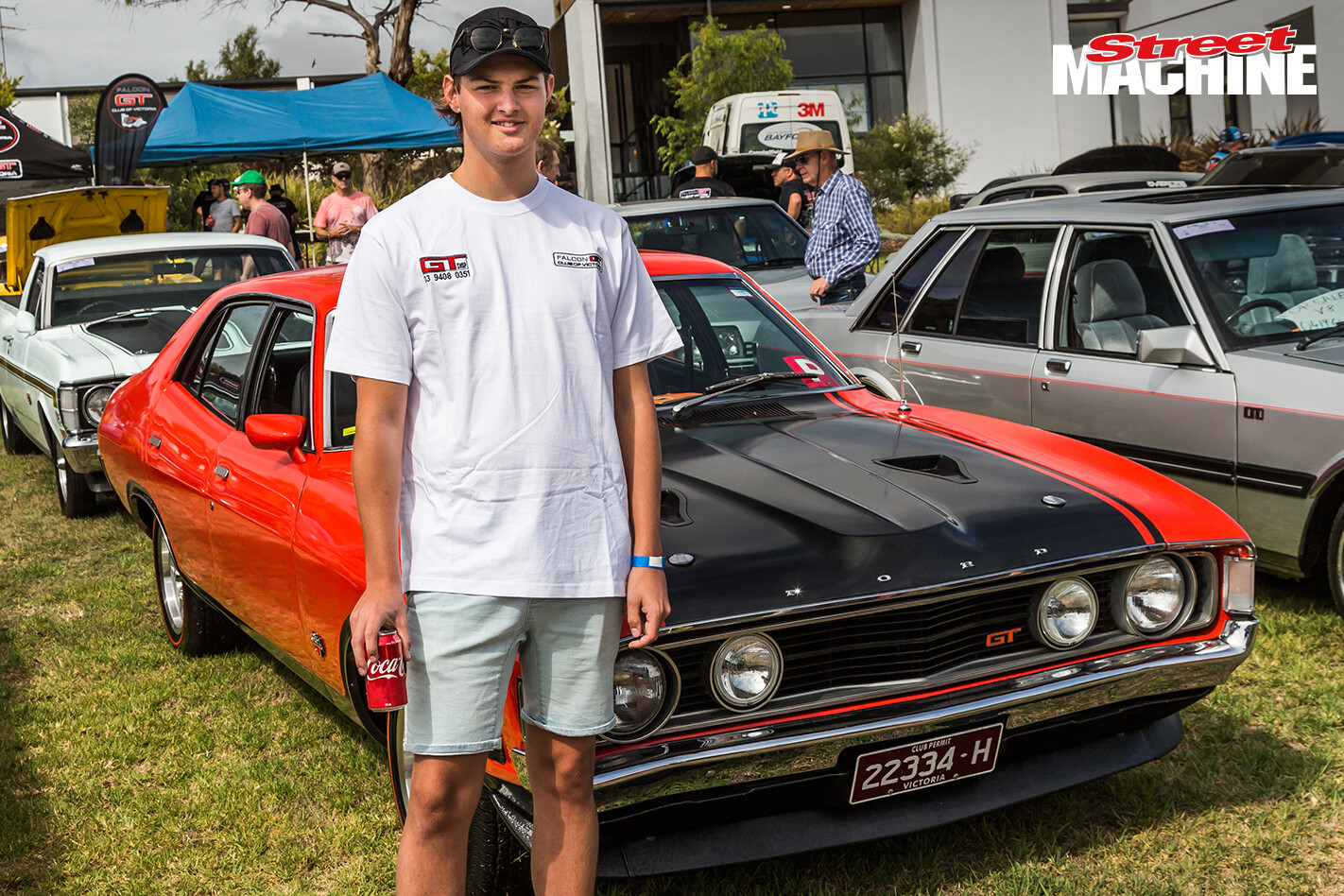 Here’s something you don’t see every day – a genuine XA GT with P-plates on it! James Moretti is the young fella who owns and cruises this lovely car, but his father Paul is the one who restored it a few years ago. “I wanted it to be factory,” Paul said. “You know – shit gaps, really peely paint and things that don’t fit properly!” Paul Ellis would be up for the Best Engineering award if the AFD had one – his FG G6E Turbo sends power to all four of its feet! Paul built a jig out of an FG front cut and spent two years cobbling together a crazy combination of BMW xDrive uprights, Holden Adventra front diff, a suitably toughened Adventra transfer case and Territory driveshafts. The car’s 300rwkW of shove is split 38:62 front and rear, and Toyo Proxes-wrapped Enkei rims apply it to the pavement. It was a real treat to see the Giankos XA Superbird on show at the AFD. The car was bought new by Paul Giankos in 1973, but then crashed in the early 90s. Paul’s son Tommy was just 12 at the time of the crash, and was later the driving force behind the spectacular restoration. Norm Hardinge will soon be making the long trek to Lake Gairdner to race at DLRA Speed Week, but he still had the time to bring his stunning Lincoln V12-powered ’34 Ford coupe to the AFD. We haven’t seen the car for a while and were blown away at how low-slung it is all over again!