WHEN it comes to building hot rods, West Australian Ben Forster is the kind of guy who prefers to get stuff on the road rather than impress the judges at car shows. One of his cars, a Model T coupe, got built over the course of a weekend. That was the genesis of the Winter Madness weekends that his club, Cranksters Rod & Custom Club did for a few years, and it wasn’t a mail-order assembly hot rod either – we’re talking a genuine steel coupe that got painted, trimmed and the chassis built all in one weekend. There have been a couple more put on the road since then, as well as countless other cars of mates that he’s helped along the way with his fabrication and welding skills. 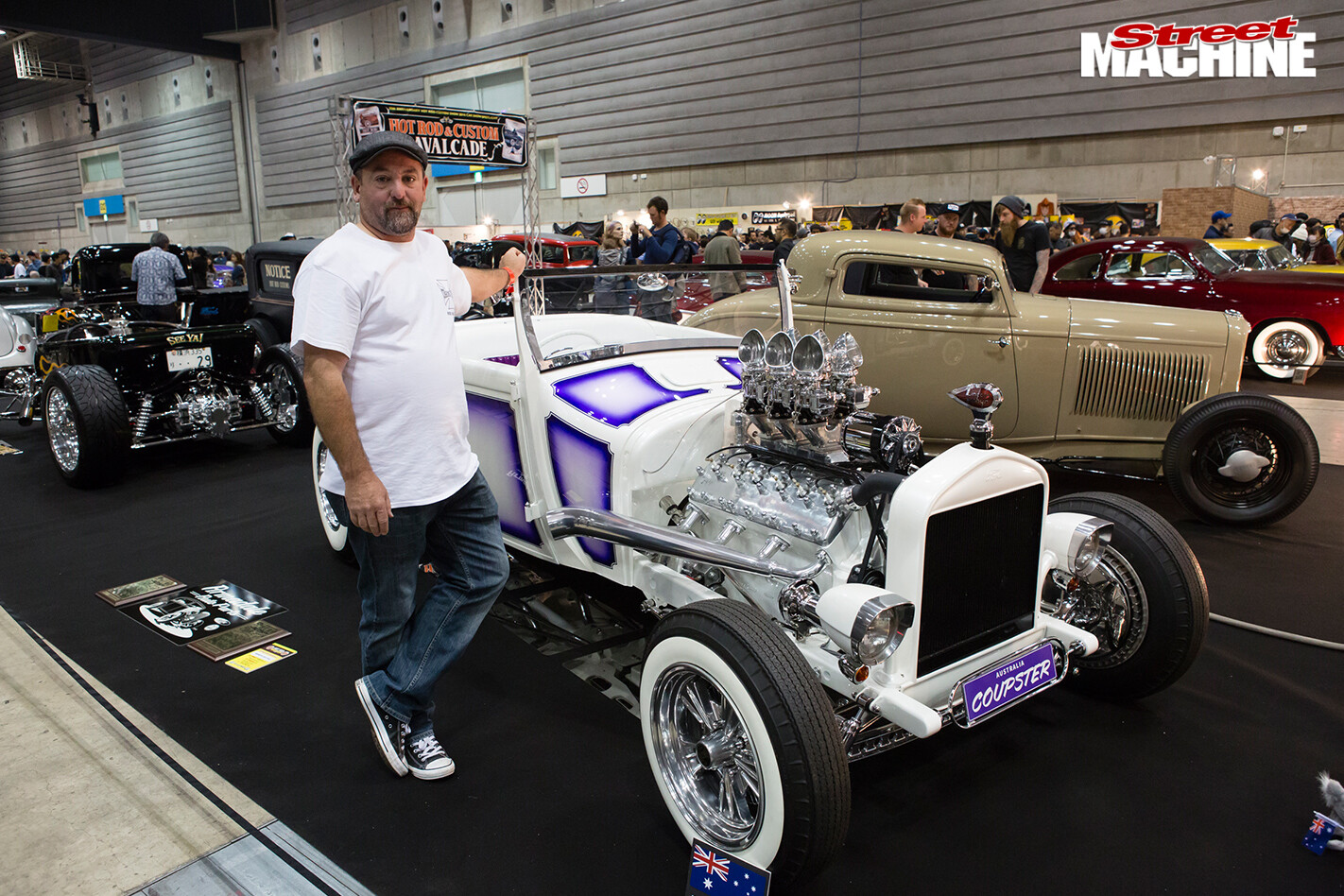 But alongside all of that, Ben was putting together this 60s-style ’27 T roadster, dubbed ‘Coupster’, because it’s actually a coupe body that’s been chopped down into a roadster. The reason? “I don’t like the look of the roadster bodies with their separate turtle deck,” Ben says. “I much prefer how the coupes look, but I wanted to build a roadster.” 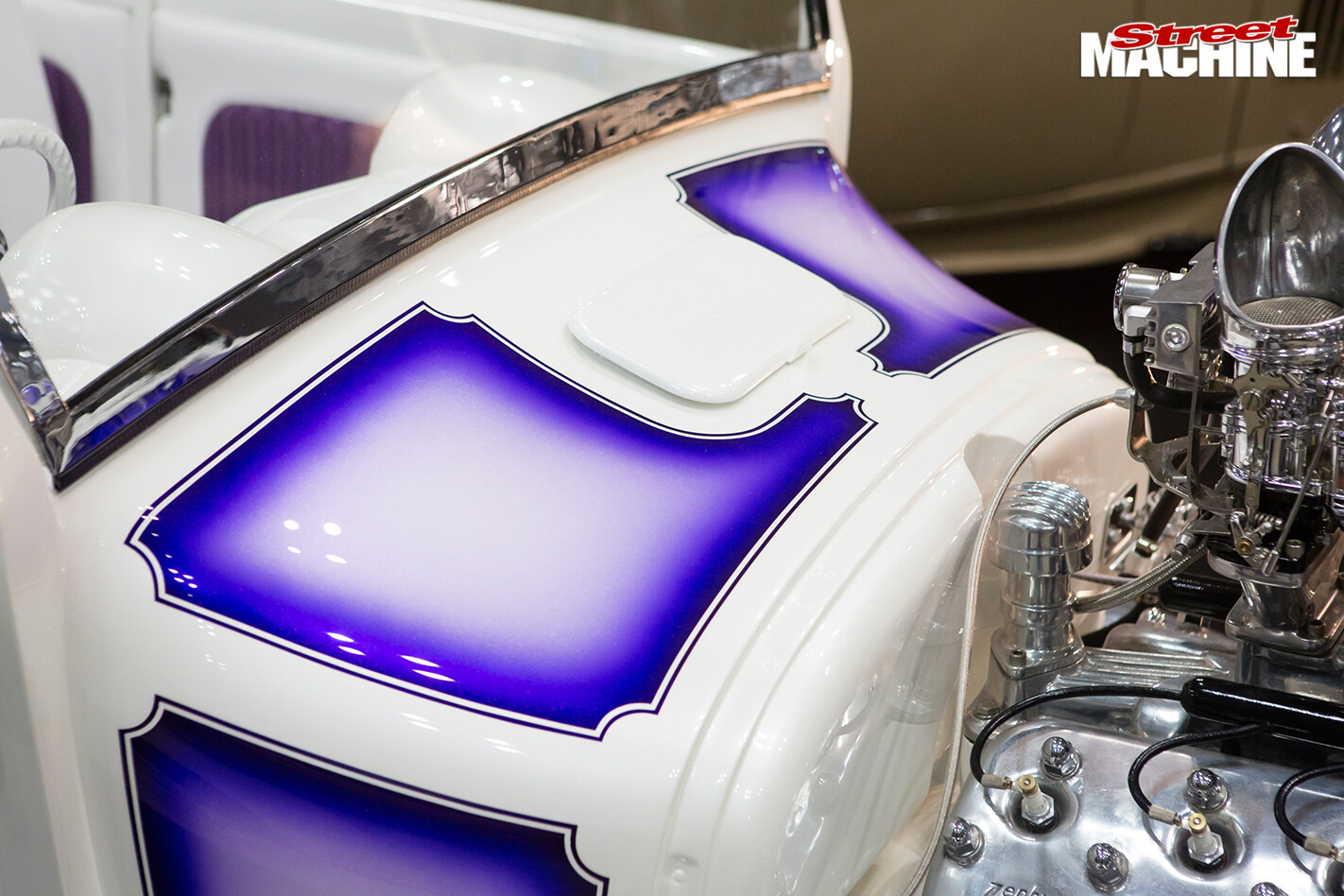 The whole philosophy behind the build was to put together something that a couple of blokes could have done back in the 60s, so it may not break any new ground in regards to fabrication or detailing, but that was never the goal. “I’ve built it to the best of my ability and it’s the nicest thing by far I’ve ever done,” Ben says. 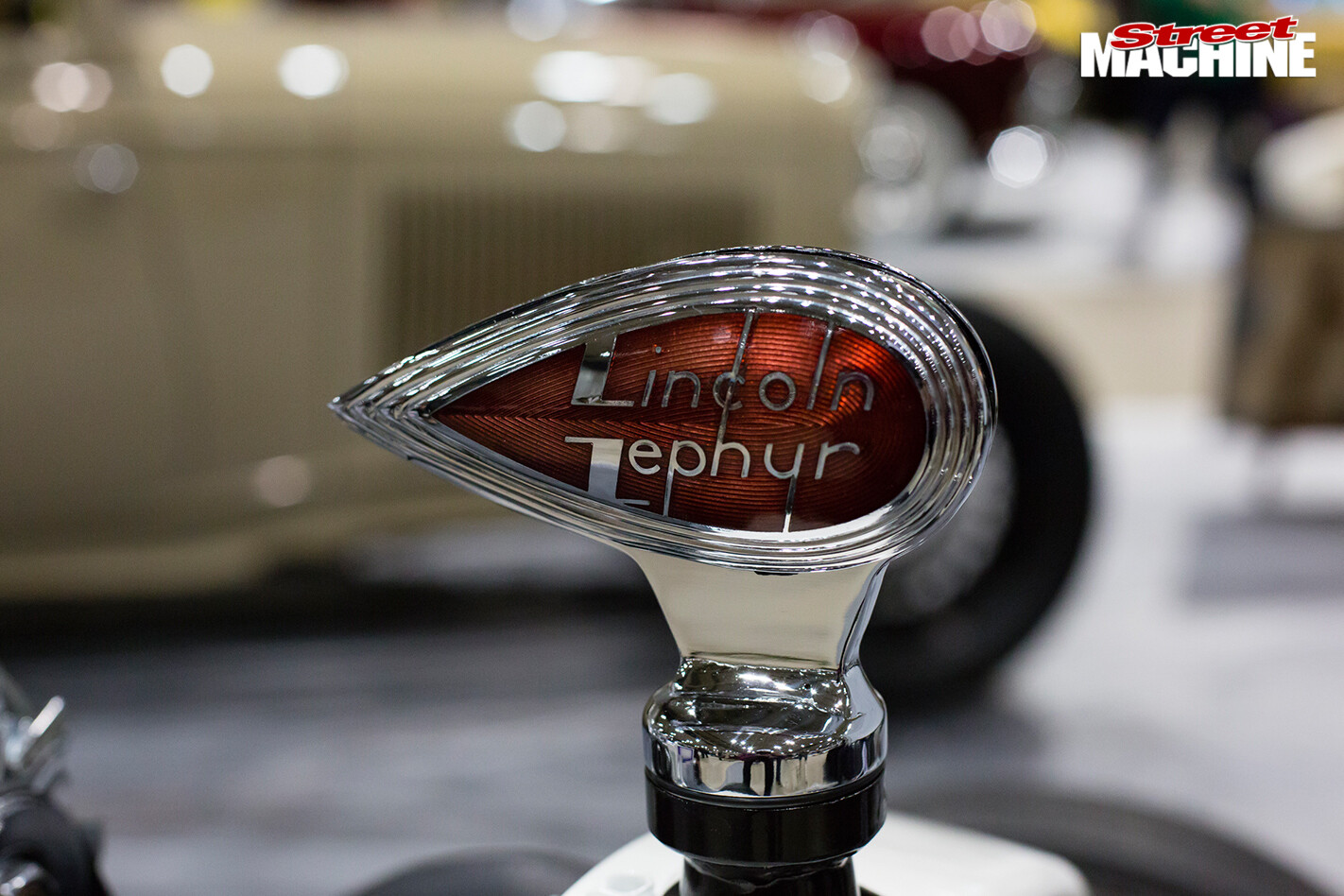 In reality, it’s probably way nicer than anyone would have built in the 60s, with its fully painted and detailed underside, smoothed engine block, tuck-and-roll interior and pearl white and candy purple paint. 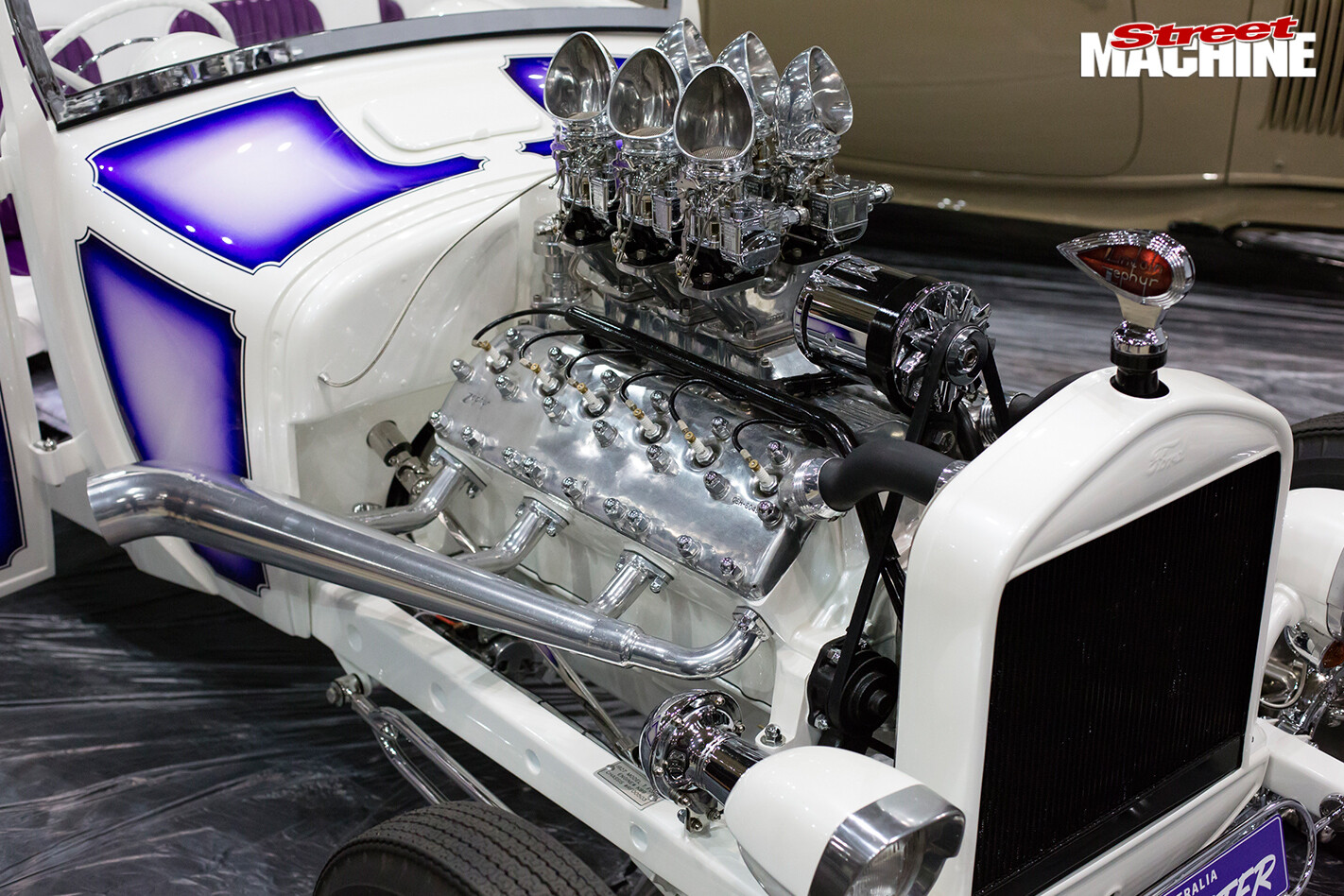 Another thing that you probably wouldn’t have seen back then is the engine. Look a bit closer – it’s a flathead, but not your average run-of-the-mill Ford jobbie. This one’s the big daddy of the family, the Lincoln V12, the engine that Charley Ryan sang about in his song Hot Rod Lincoln. 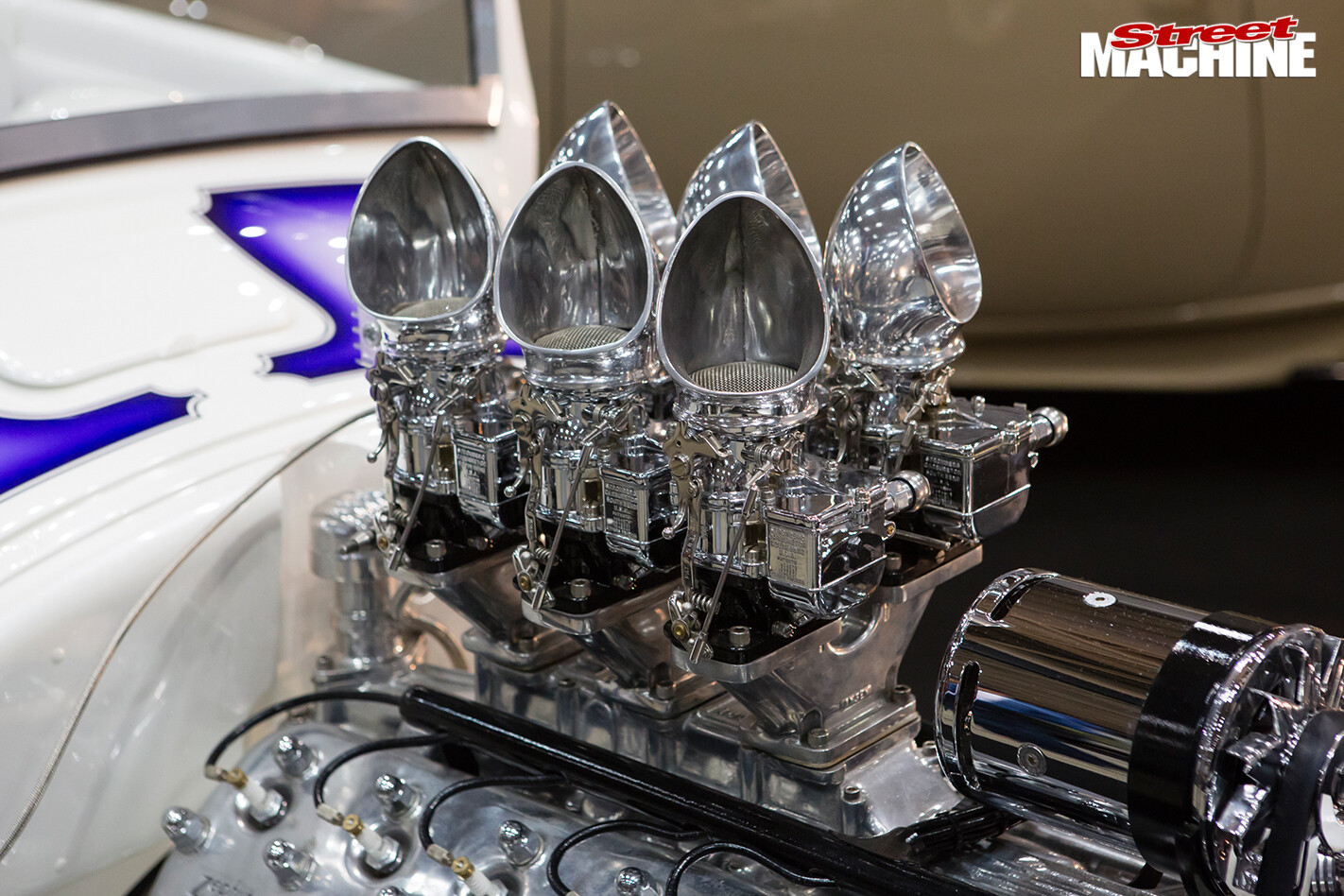 Ben kept the car under wraps in the lead-up to the show, which is never an easy thing, but all the hard work was worth it once it was unveiled in Japan at the Mooneyes Yokohama Hot Rod & Custom Show – Coupster won Burnout Magazine’s Pick and the coveted Mooneyes USA’s Pick. 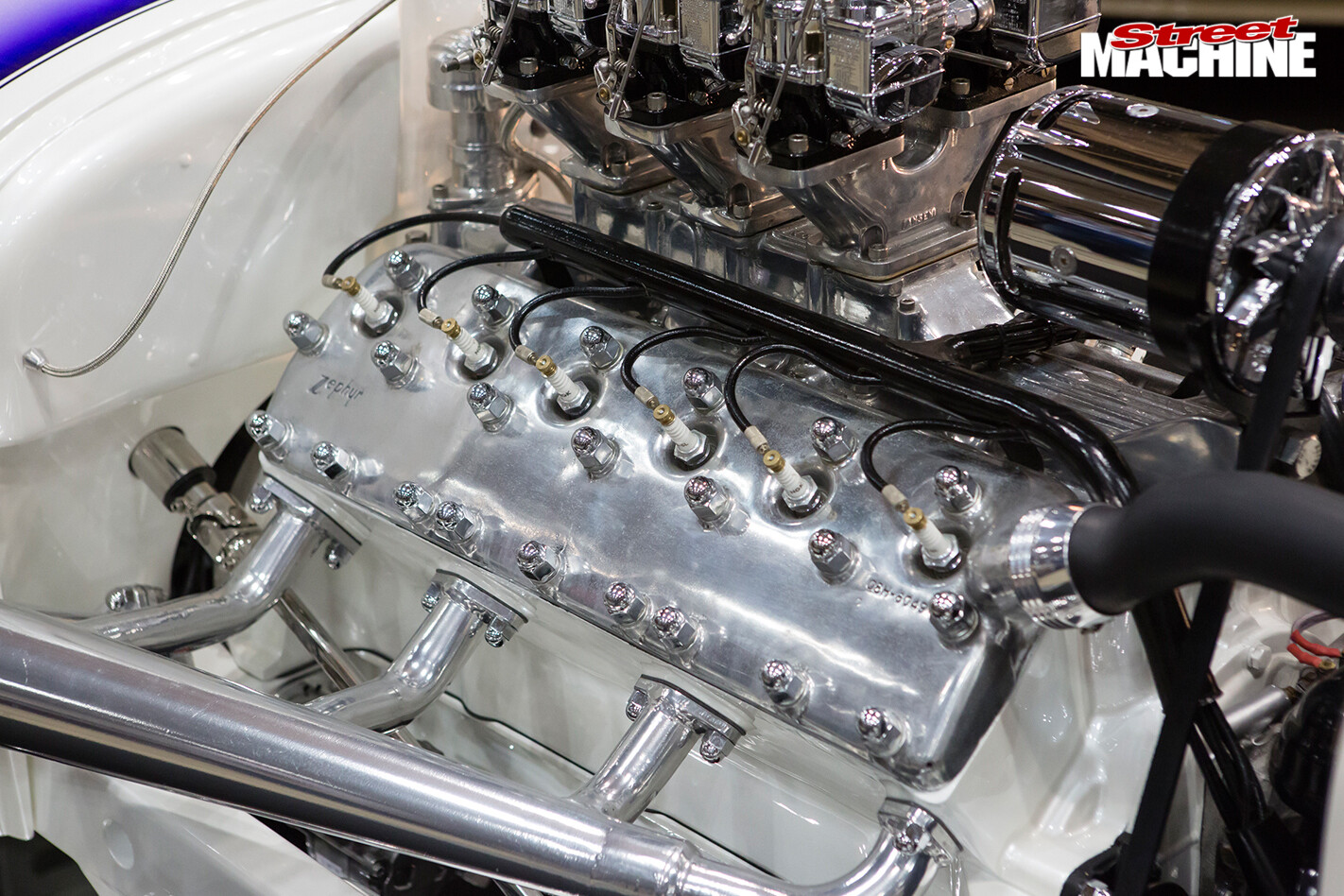 Ben was pretty knackered after the massive effort to get it there, combined with a few late nights/early mornings thanks to the discovery of a quaint little laneway bar, which probably explained his slightly stunned look when he went up on stage to receive his awards. 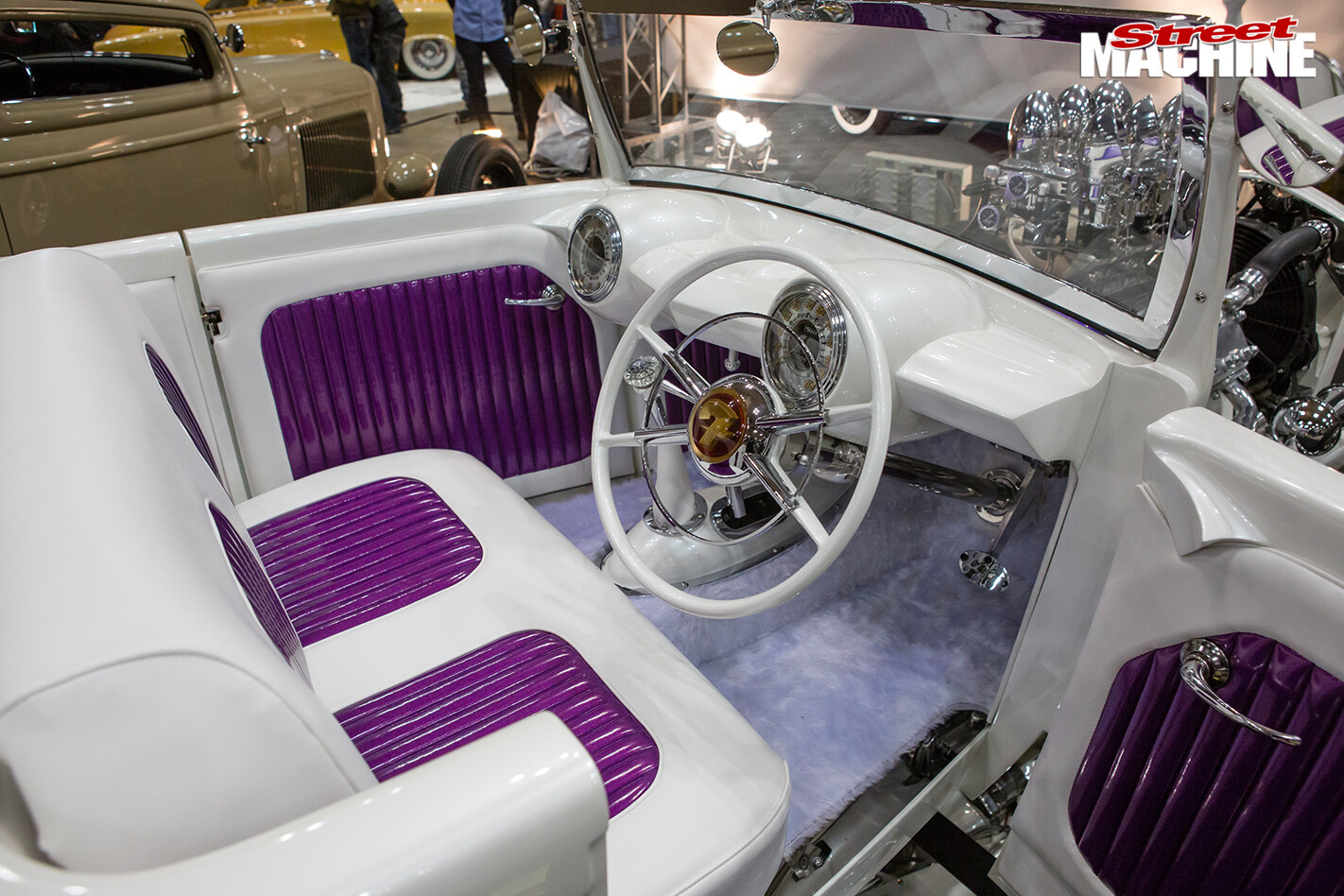 “I was the last to accept my award on stage, and standing there in front of so many of my peers, friends and the world media was a tad daunting,” Ben admits. “I am not exactly the shy and retiring type; however, that was one moment I will never forget.” Ben would like to thank the following people for making it all possible:

“My father for his patience and help in the build and attempting to keep me focused; Stewart Parris for his unbelievable talent – the accolades should be going to you for making me look good; Cranksters Rod & Custom Club – my brothers; my Swedish brothers – you made our trip; my entourage from Perth, Brisbane, Melbourne – good things happen when you are surrounded by great people; Dale Haberfield and John Harney – brilliant photographers for documenting the journey and the end result; my beautiful wife and two daughters for putting up with this! I love you all; Drew Menzies for your vision in motor trimming and being a great friend; Rory for your attention to detail in the electrical; the team at EDI International Shipping for looking after my girl; Alan, for just everything; Steve and his team at Mooneyes for everything they did for us; finally, Shige for allowing me the privilege to bring my car halfway around the world and take part in what has become more than a show – it’s spiritual. Ask anyone who has been. If you have managed to get through reading this you now need to book flights to next year’s Mooneyes Yokohama Hot Rod & Custom Show.”