While we can't quite convert Americans into Vegemite-lovers, us Aussies are working hard at getting the automotive industry to realise that we've got what it takes to be heavyweights in high-end performance. 2016's Performance Racing Industry trade show in Indianapolis hosted a big crew of Aussie companies that had made the trip over the pond to show 'em how we do it. The PRI show is the no-frills, all-horsepower brother to SEMA, and the perfect place to show off some true-blue innovation when it comes to the automotive aftermarket. Queenslanders Noonan Ultimate Race Engines had been working hard both out of Australia and their shop in Lindon, Utah to debut three new engine packages at PRI this year. The show was the first time the custom-built billet blocks had been show to any market and Jamie Noonan was relieved to finally be able to show them off. "It's been a big long road getting here with these projects. We've been working very hard over the last 12 months to finalise these engines," he said. 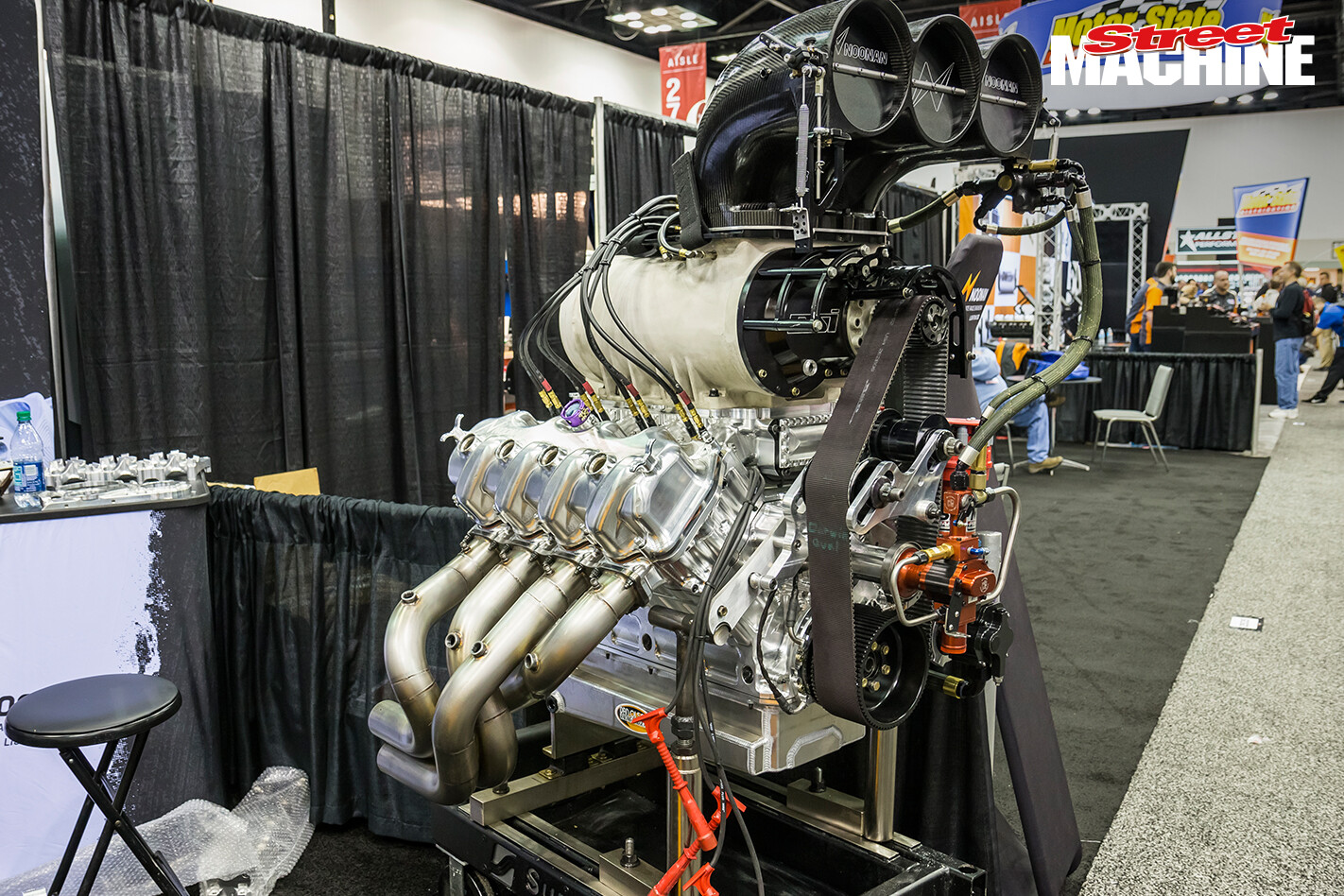 The 4.900in-bore space Hemi is the biggest and toughest of the bunch and is designed for NHRA and Outlaw Pro Mod, and Tractor Pull markets. Noonan Race designed the engine from scratch as Jamie explains "We started with a blank sheet of paper. We were pretty limited by what we could do with a 4.800in bore space so we looked at what we could do to make it better."

By resizing the bore spacing, nothing really fit anymore, so Noonan Race raised the cam 1.250in and increased the lifter bore spread from 2.500in to 3.250in allowing bigger and better everything from larger valves to increased air flow. The new head design also allows head removal without needing to unbolt intake set ups, greatly increasing service speed on valve train parts. 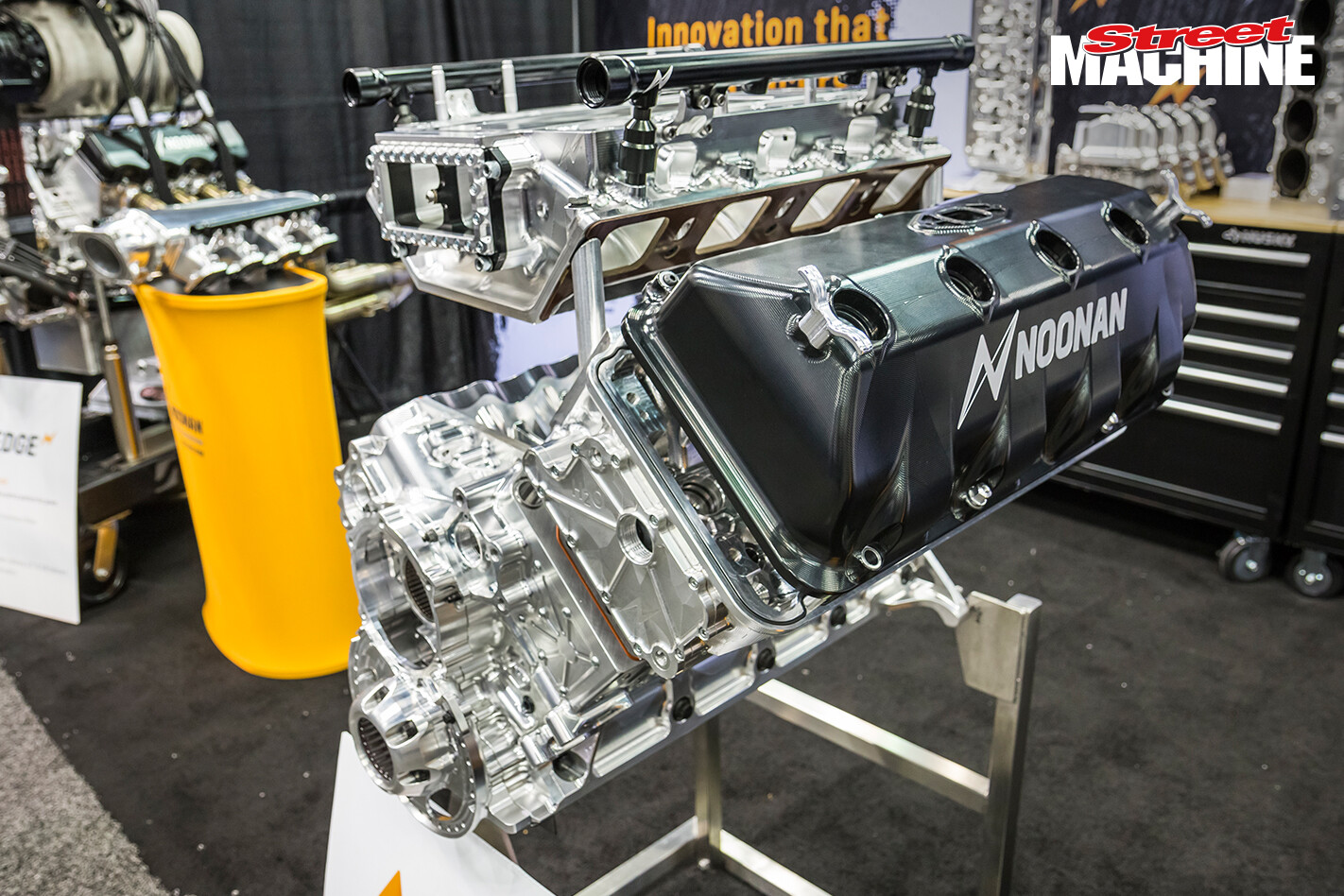 The other Hemi offering from Noonan Race was their water-jacketed all-billet Hemi for high-performance street applications. It was based on their championship-winning Top Alcohol engine architecture and can suit up to 2500-3000hp applications, turbo and supercharged. It can take up to a 4.500in bore, has a 10.725in standard deck height and has water flow on both sides of the bore meaning each pocket has an in and out flow to avoid stagnant water, ultimately resulting in a cooler and more reliable block. 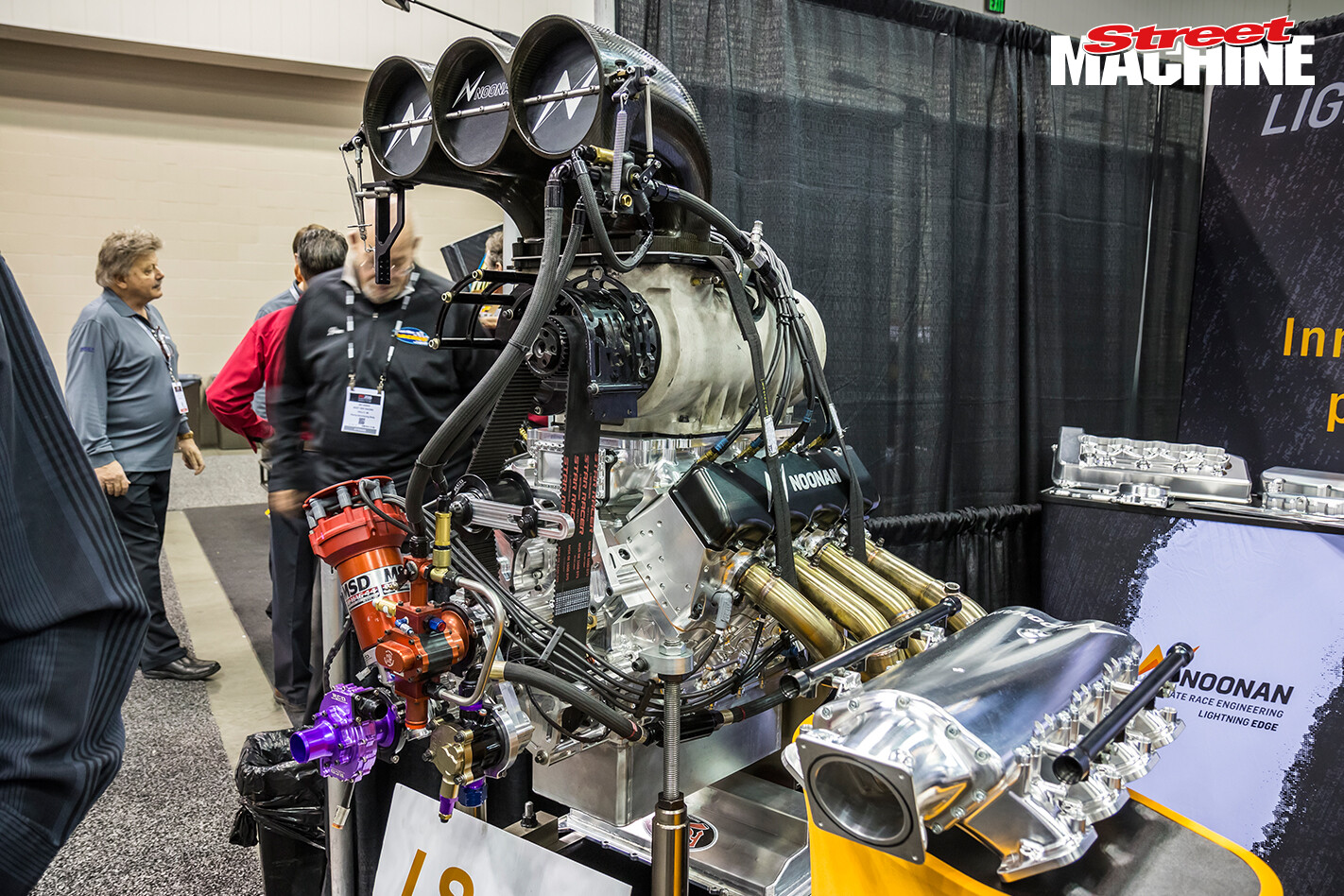 The third engine in the Noonan Ultimate Race Engines stall was their LS-EDGE platform. An all-billet alloy LS-based block, everything has been beefed up while still retaining standard engine mounts and stud patterns but targeted for the 2500hp+ range. It features a raised tunnel cam, multiple options for mains, oiling systems and lifter bores and is ready for Jesel belt drives and RCD cam gear. With multiple options for water-jacketed or solid heads and blocks, as well as intakes for all kinds of induction setups Jamie says they're targeting a much larger market with the LS-EDGE "We wanted to make it available to go in anything. It can go in a race car, or your street car and because we didn't change any mounts you can pull your engine out and put this one straight in without hacking up the car." Mainline Dynamometers had a big display at PRI with two of their Pro Hub dyno models rated to 3000 and 5000hp. The hub-mounted dynos allow for the most accurate representation of output data on pulls because there are no tyre factors like bounce, expansion or slippage that could skew the end numbers. This means you get a really accurate idea of what's going on with the whole set up from flywheel to hub. On the 3000hp Pro Hub model, Mainline had the Street Beast on display. 'Doc' Love from the tv show Street Outlaws was happy to lend his infamous '70 Monte Carlo to the stall over the weekend because Mainline had been instrumental in his conversion to EFI this year. Working with fellow Aussie company Haltech, Doc had made the switch to fuel injection and tuned the nitrous-fed big-block Chev with a Mainline dyno at EFI University. 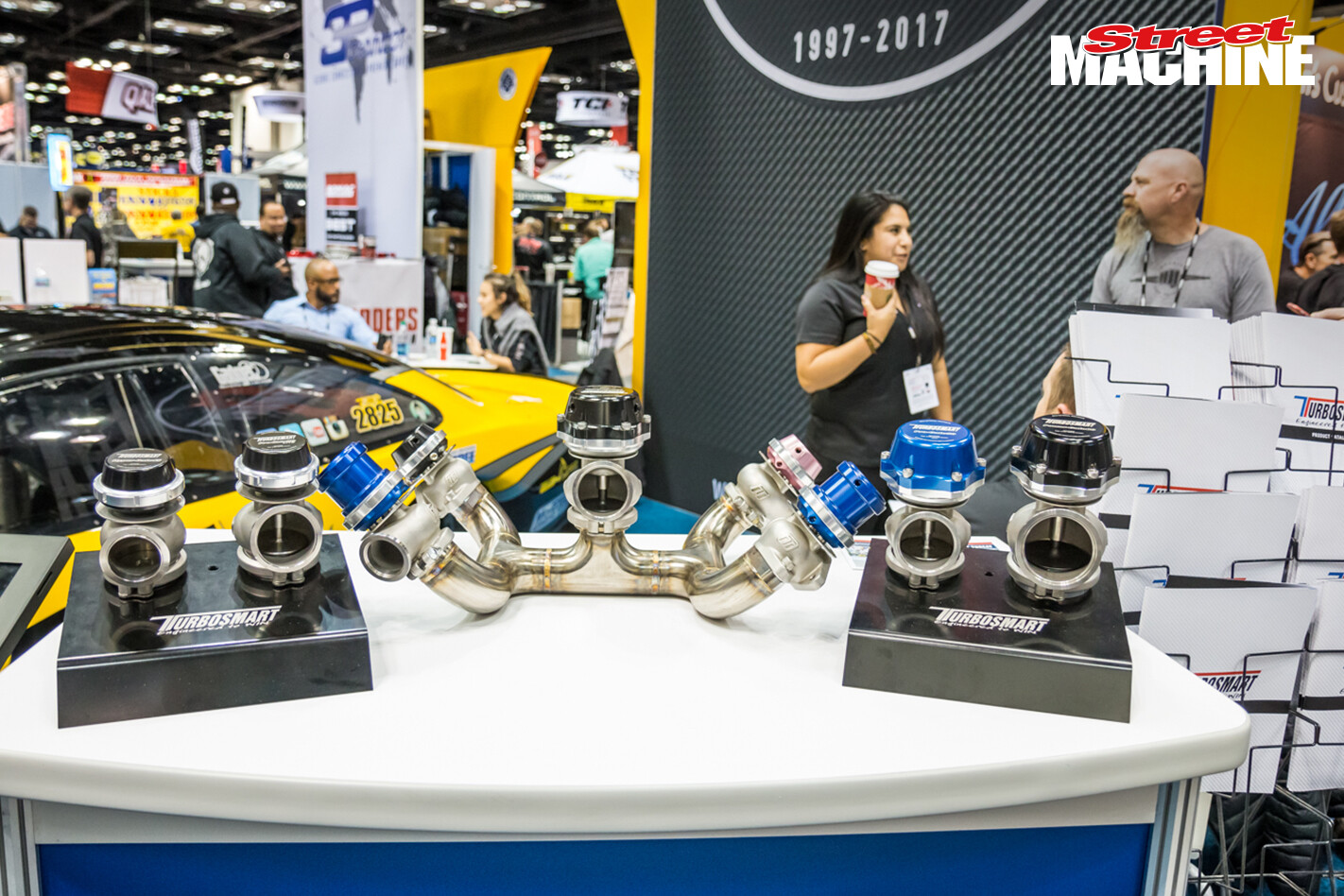 Turbosmart is celebrating 20 years in the industry after its small beginnings in Sydney in 1997. The company is now international and Turbosmart USA had a big stall showcasing some of their latest products at PRI. Chris from Turbosmart UK was on hand to walk through some of their 2017 offerings.

Their updated oil pressure regulators went off like a house on fire at SEMA and the new Powerport blow-off valves were developed in response to the USA market for applications like Pro Mod. Chris explains their original 50mm BOVs just weren't big enough for today's racing so its been sized up to a 2.5in valve with a sealed system either side of the main diaphragm meaning it can be used like a cold-side wastegate. Turbosmart is also expanding their range to products for less typical high-power cars like hot hatches, especially in markets like the UK and South America where the four- and six-pot mills are king. New products for the Hyundai Veloster and Ford Focus were on display and Chris says "There's a lot of passion and enthusiasm out on the streets, so if we can give a valuable product to these guys, we're happy to put something together." Also at the Turbosmart booth was Rocky Rehayem's PAC Performance Mazda6 rotary drag car. It's powered by a triple-rotor 20B Mazda engine that puts out just under 2000hp and 920lb-ft with 50psi of boost. Rocky and PAC had just finished up racing it at Orlando Speedworld before taking it to PRI and the crowds were flocking over the car all weekend. 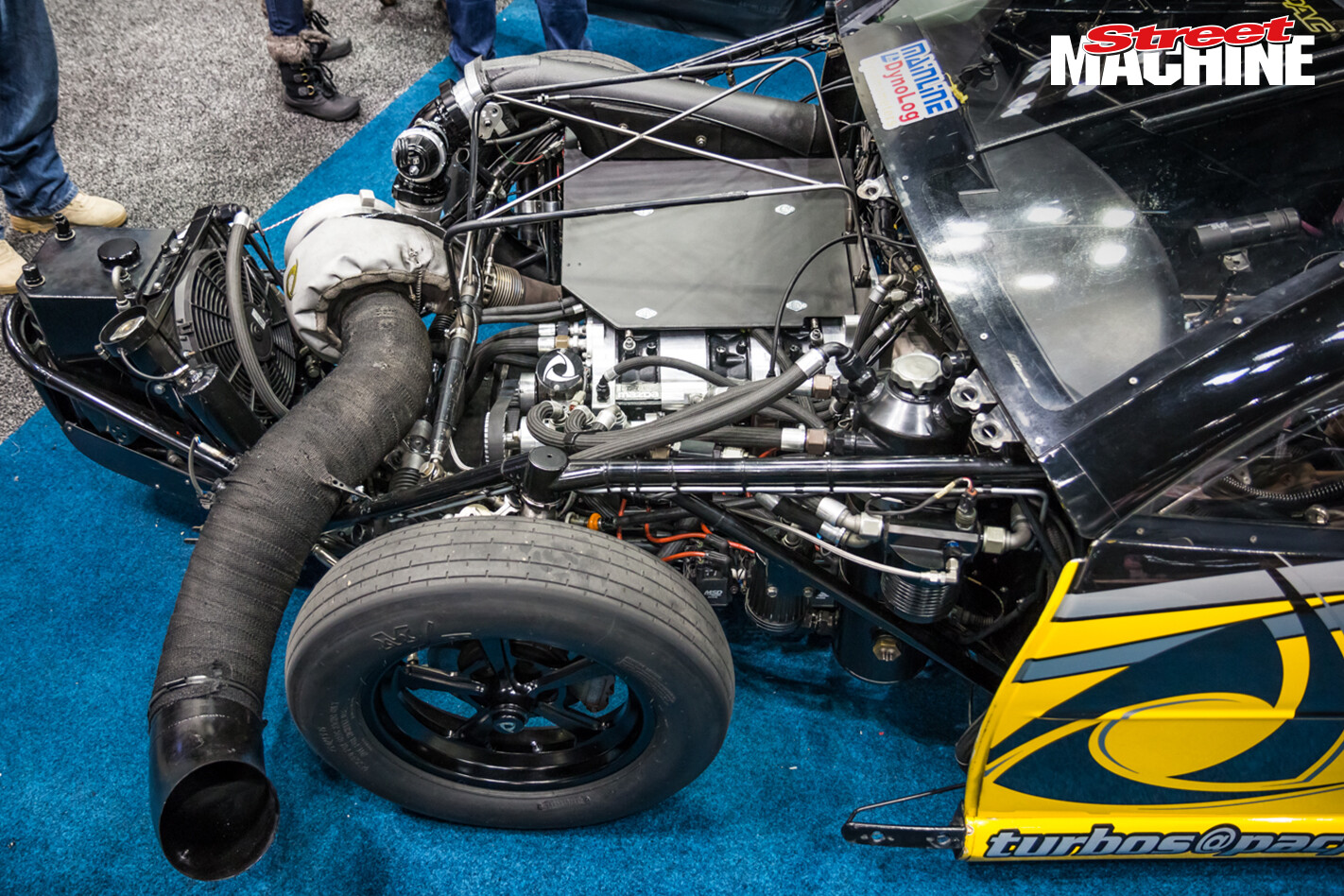 The best it's run is 6.20@225mph and its fitted with host of Aussie parts including Motech data acquisition, a MicroTech LT32 ECU, and of course Turbosmart go-fast bits. "Turbosmart has been our sponsor right from day one – about 20 years now – and we've helped them develop a lot of the parts that are sold. We proof them, use them on our race car and our dyno. We've been with them for a long time." Rocky said. Plazmaman were new to PRI this year but the response to their range of products exceeded what they were expecting. Matt Ramsey recalls "Everyone commented on how tough and reliable [the products] look. It's been more successful than I thought it would be." Their new LS billet intake manifold was the star of the bunch for the US market. It's suited for a large suite of LS engines and has options for 8 or 16 injector runners as well as a nitrous burst panel incase you feel like pushing your mill's limits. Other products like their intercoolers and intake manifolds for Toyota JZ and Nissan RB engines were surprisingly popular. Matt reasons that there's a huge amount of LS products available at PRI, but the guys that are really into their four- and six-cylinder racing gravitated towards Sydney-based Plazmaman. Shaun's Custom Alloy was another newbie to PRI and he was also showing off his range of LS-based intake products. All CAD designed and made in Sydney, the billet intake manifolds were right on the money for the US guys and Shaun had brought a range of low-profile manifolds to cater to that market. They're suited for C6/C7 Corvettes, and Camaros. Shaun had also just finished a new LS3/LS7 water to air intake manifold with his trademark attention to detail and quality finish. 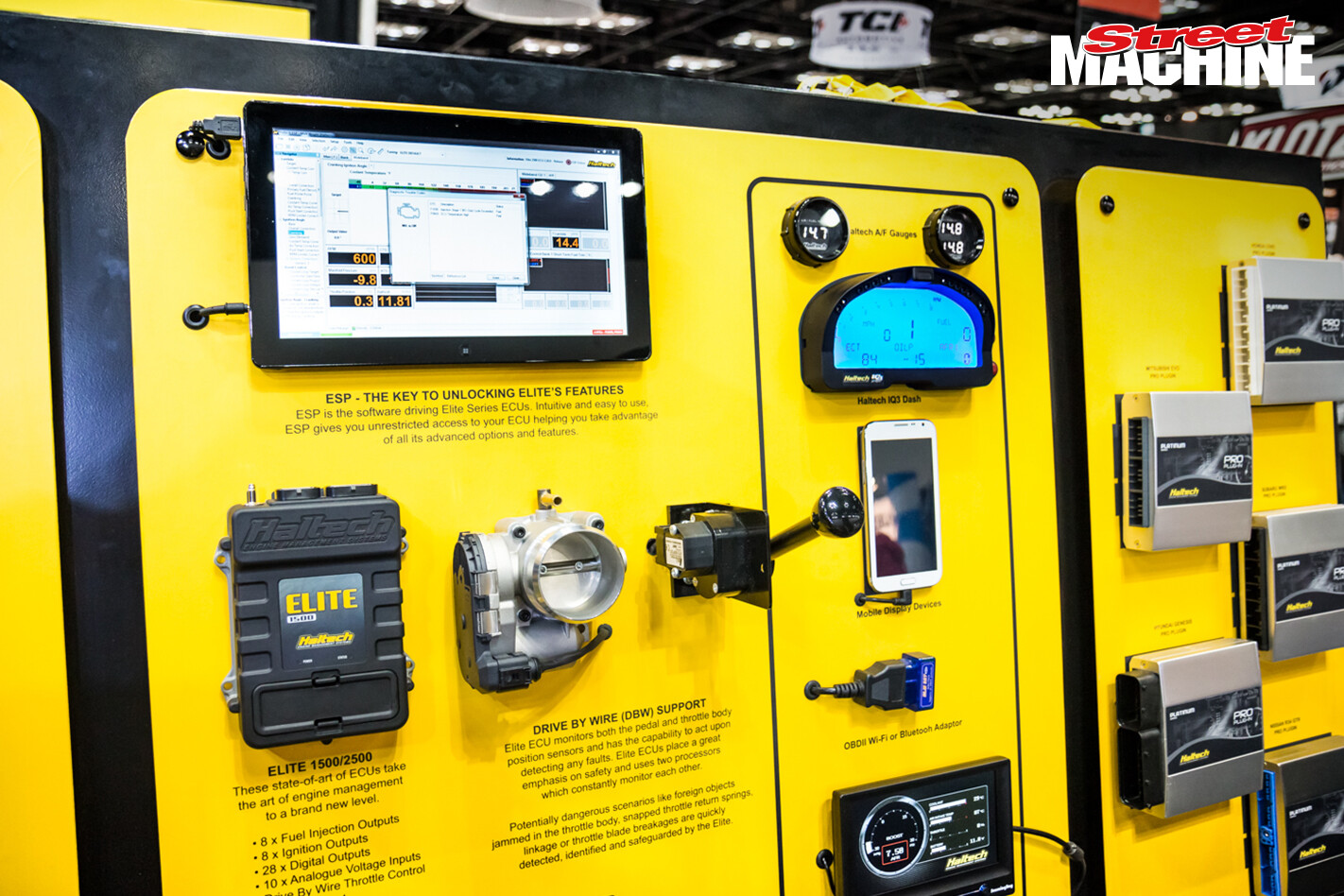 Haltech had a few new products to show the Americans, including the Elite 550 which is a much more accessible ECU model, as well as IQ3 Street Dashes and race logging inputs. They'd also developed new applications for their Elite 1500 and 2500 models for Honda and Acura RSX and K-model engines. 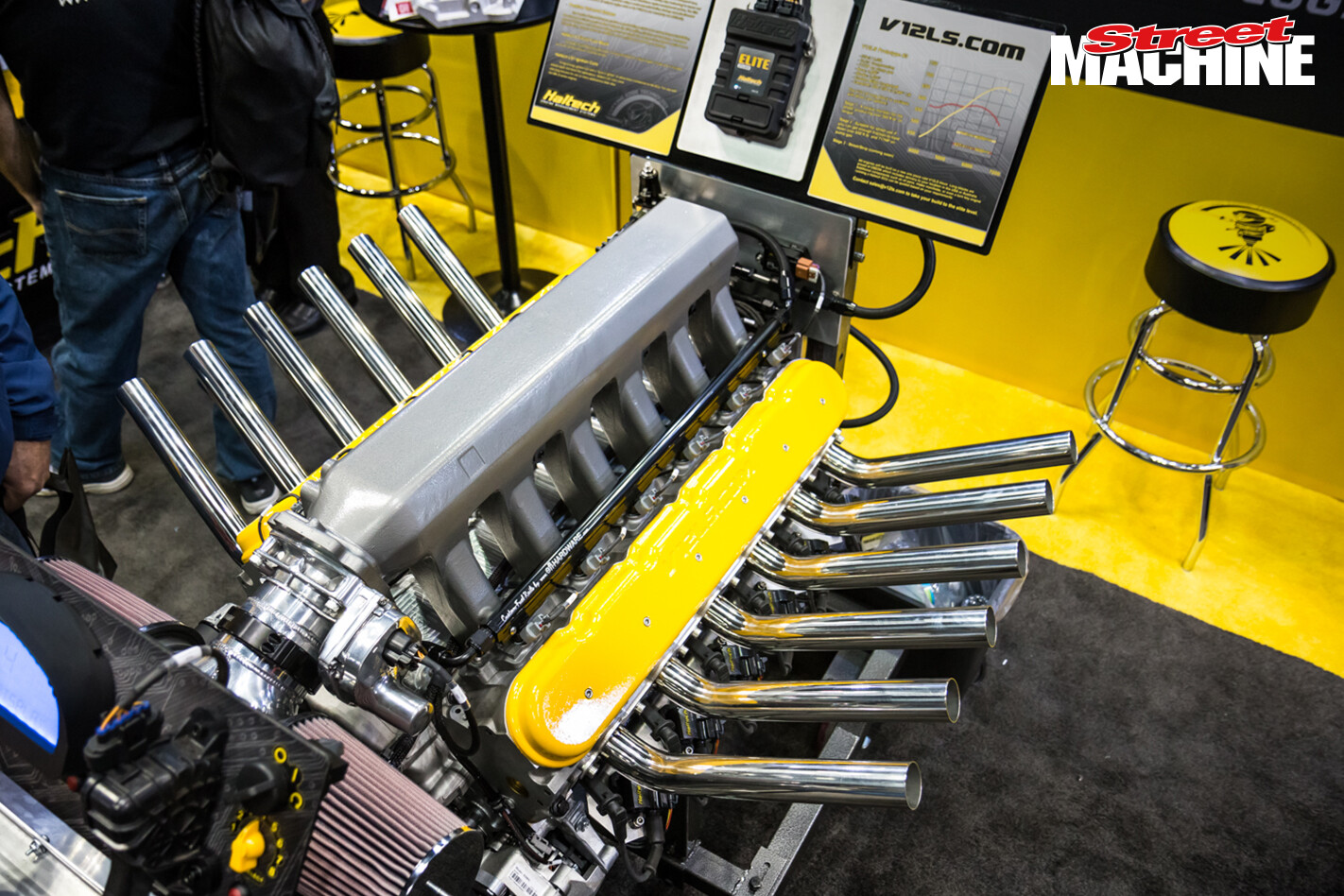 On display in the Haltech booth was a V12LS featuring a bunch of their goodies as Haltech are working with the engine builders on providing different engine management options for crate engine packages in the future. They initially reconfigured an Elite 2500 to work with the twelve-cylinder ignition system to much success and have now developed an Elite 750 management solution for the LS, with both potentially available as options on a turn-key long-block V12. In the Australian corner of the Indianapolis Convention Center there were bunch of other companies showing their latest products including ICE Ignition, Yella Terra and XClutch – the American branch of Australian Clutch Services. ICE Ignitions had a full suite of their distributors, intakes and ignition management systems on display. XClutch had a small booth with a cool setup of expanded clutch assemblies targeting niche high-performance applications, such as Ford Focus RS and Toyota 86 – a US market that Stewart Furze explained is starting to get bigger. Jim Petrakis was with his new range of Yella Terra rockers developed for AFR and TrickFlow heads. "We come every year. We've got a lot of drag racers who use the product and it's been reliable and they've been winning so it's been good for us." Yella Terra has been coming to PRI for decades and Jim appreciates the fact that the difference between US and Aussie markets allows them to develop and innovate better than ever. 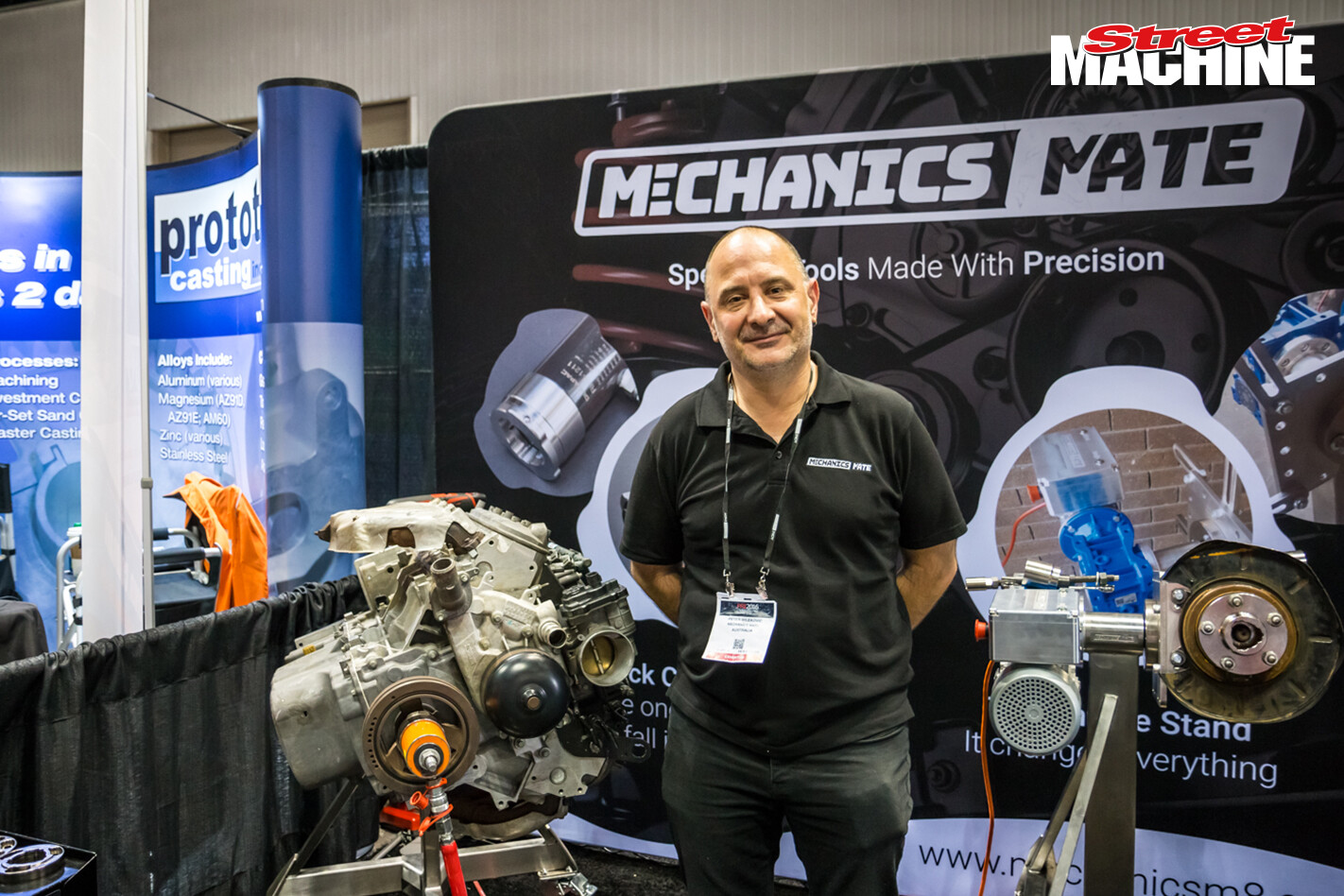 Mechanics Mate was holding it down in the Manufacturer's Hall and Peter Milekovic was giving demonstrations of his range of mechanic's helpers all weekend. He offers engine stands with 360-degree rotating mechanisms that can be powered with something as simple as a cordless drill. They come in two options, 1000lbs and 2000lbs applications and have a bunch of options like drip trays and tool trays. Peter's quick-change couplings seemed quite popular with the crowds, especially those familiar with pain-in-the-arse jobs like hub pulling and changing out harmonic balancers. Peter was very happy with his PRI endeavour "Half the leads from SEMA were dead when followed up. Here they are much stronger and much more serious, which is very good."