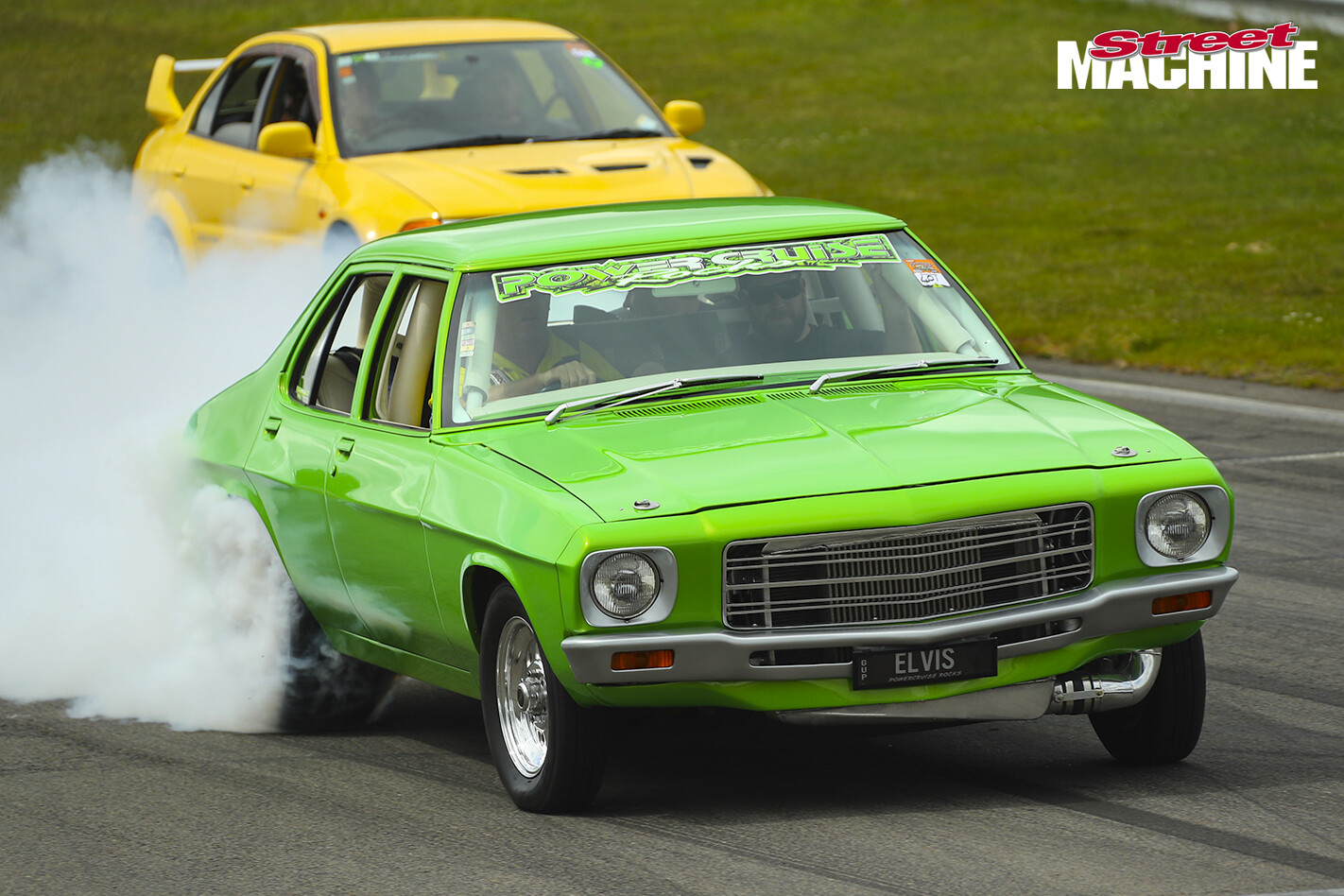 The Monaro runs a 377-cube blown alcohol motor making around 1500hp. Pete went through 25 sets of rear tyres over the weekend, through a combination of cruising, powerskidding and drag racing – which somewhat unconventionally included donuts halfway down the straight. It was certainly a valiant effort.

SCROLL DOWN TO CHECK OUT THE FULL GALLERY! 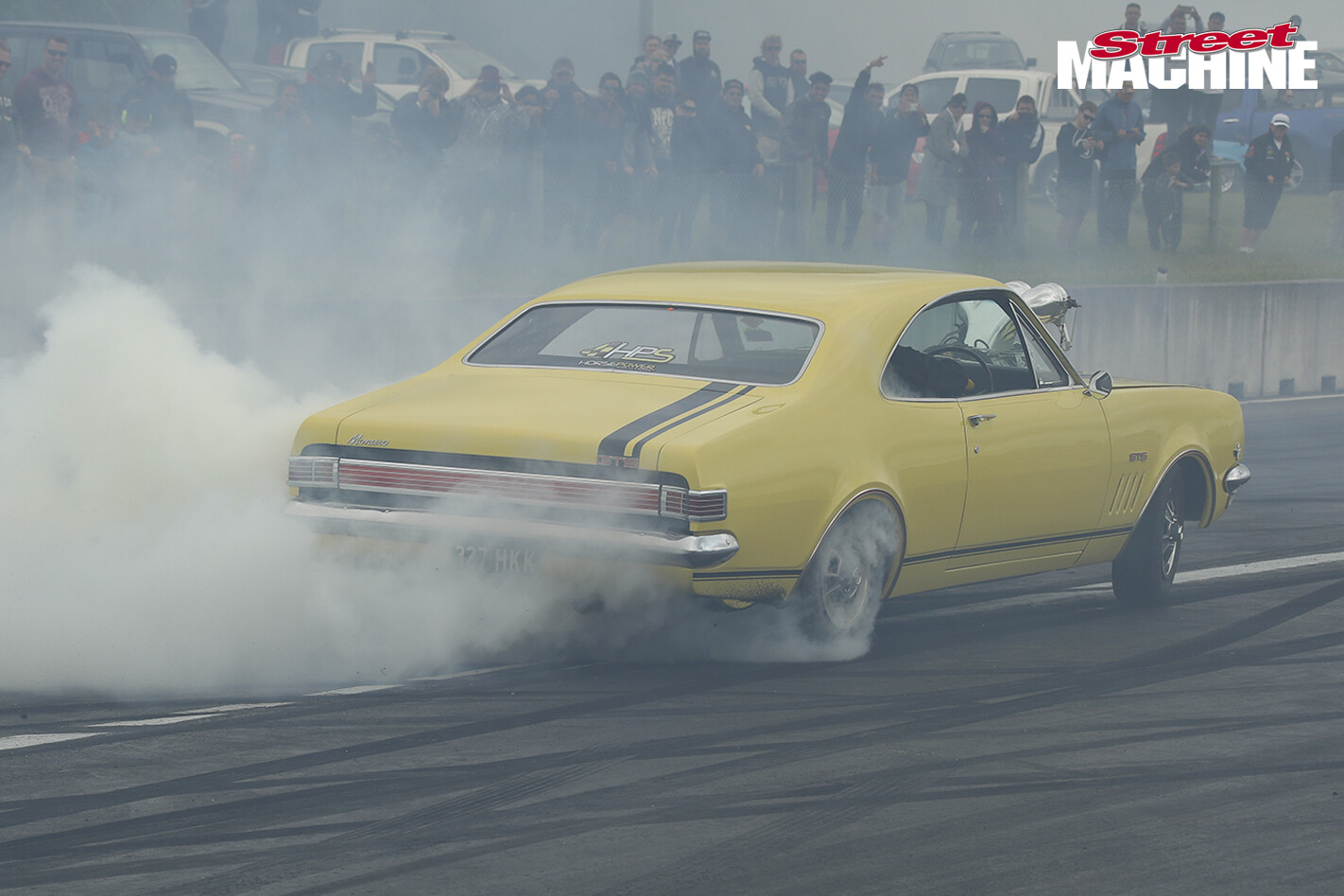 “The Kiwi locals lost their minds over the tough Aussie cars,” photographer Dave Reid says. “Loader, Brasher and Gup all ran passenger laps of the track and the burnout pad and the recipients couldn’t believe their luck.” Gup even held a competition to let a spectator drive his HQ. Josh Falish won the comp and also scored free entry and accommodation for the weekend. Even though Josh has plenty of experience piloting high-horsepower cars, he decided to leave the driving to Gup. 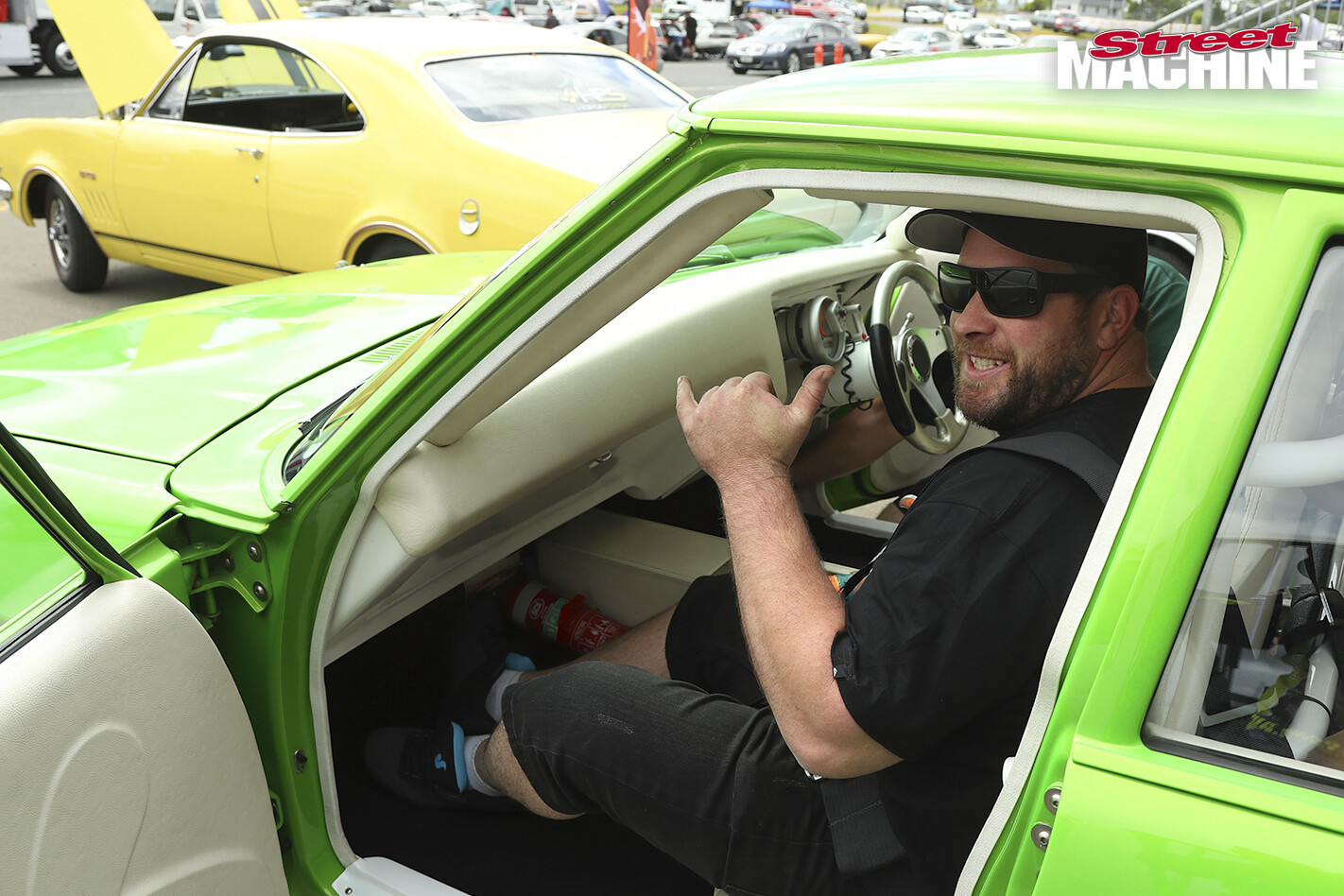 The turnout was huge and easily the biggest Powercruise that Gup has run in New Zealand with close to 500 entrants rocking up. The Kiwis brought some pretty cool metal too. There was a good mix of tough blown cars like the NANNA Q blown HQ sleeper, turbo import cars and a stack of tough rotaries! The Kiwis love their rotaries and the Wankel boys gave as good as they got in the burnout stakes. Even with competition from Australia’s burnout kings in Loader and Brasher, the winner of the burnout event was Steve Ellcott’s turbocharged 13B rotary powered Mazda RX3 wagon. It makes around 500hp, and Steve throws it around like Loader in UCSMOKE. 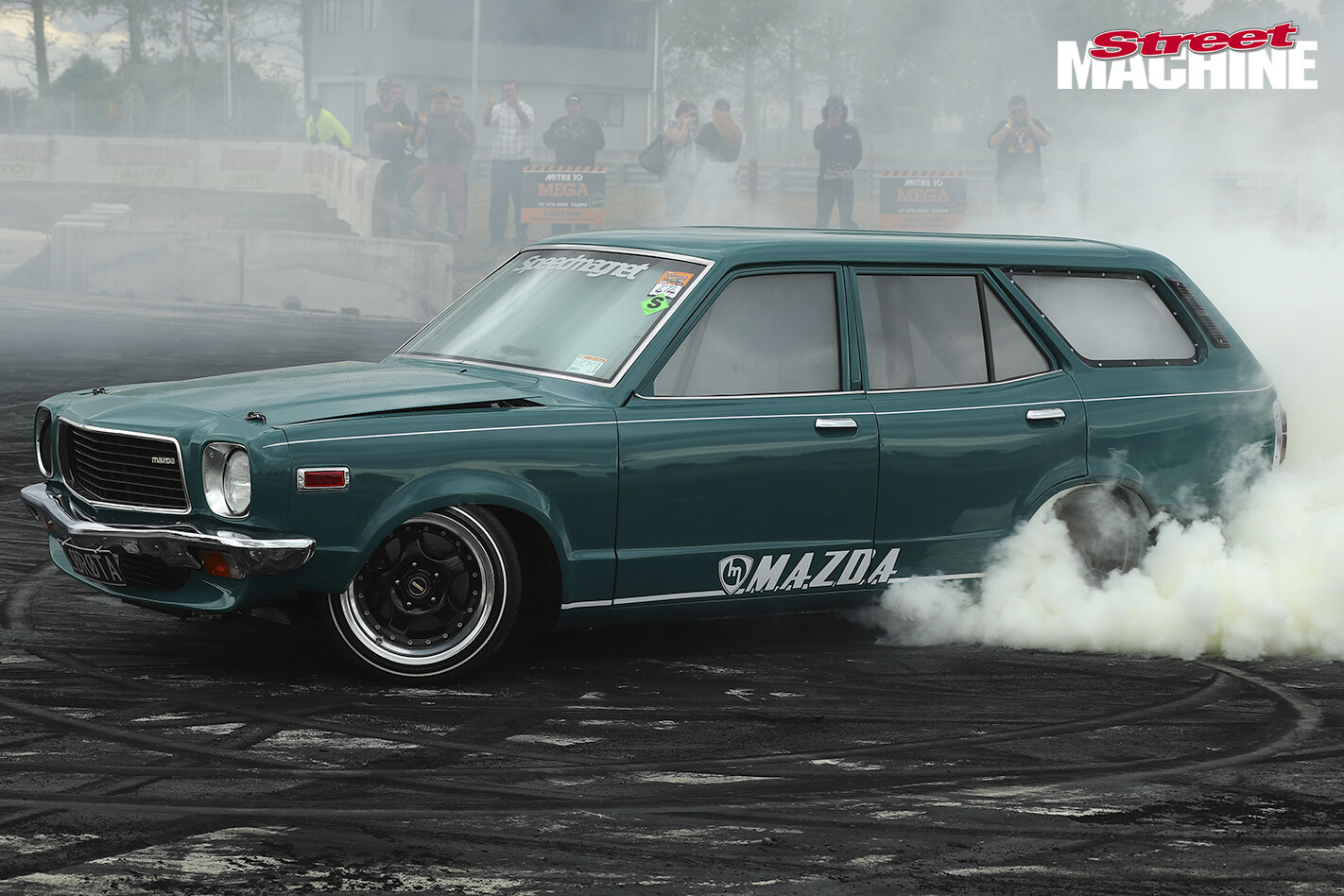 “Loader and Brasher were crowd favourites,” says Dave. “Every time they fired up, spectators literally ran over to the burnout pad to witness the smoke show. The crowd was in total awe. Some had seen the Burnout Masters in online and the real deal didn’t disappoint, for others seeing it all for the first time it was a total brain-melter. There were even people in the crowd holding home-made signs reading ‘We love you Steven Loader’!” 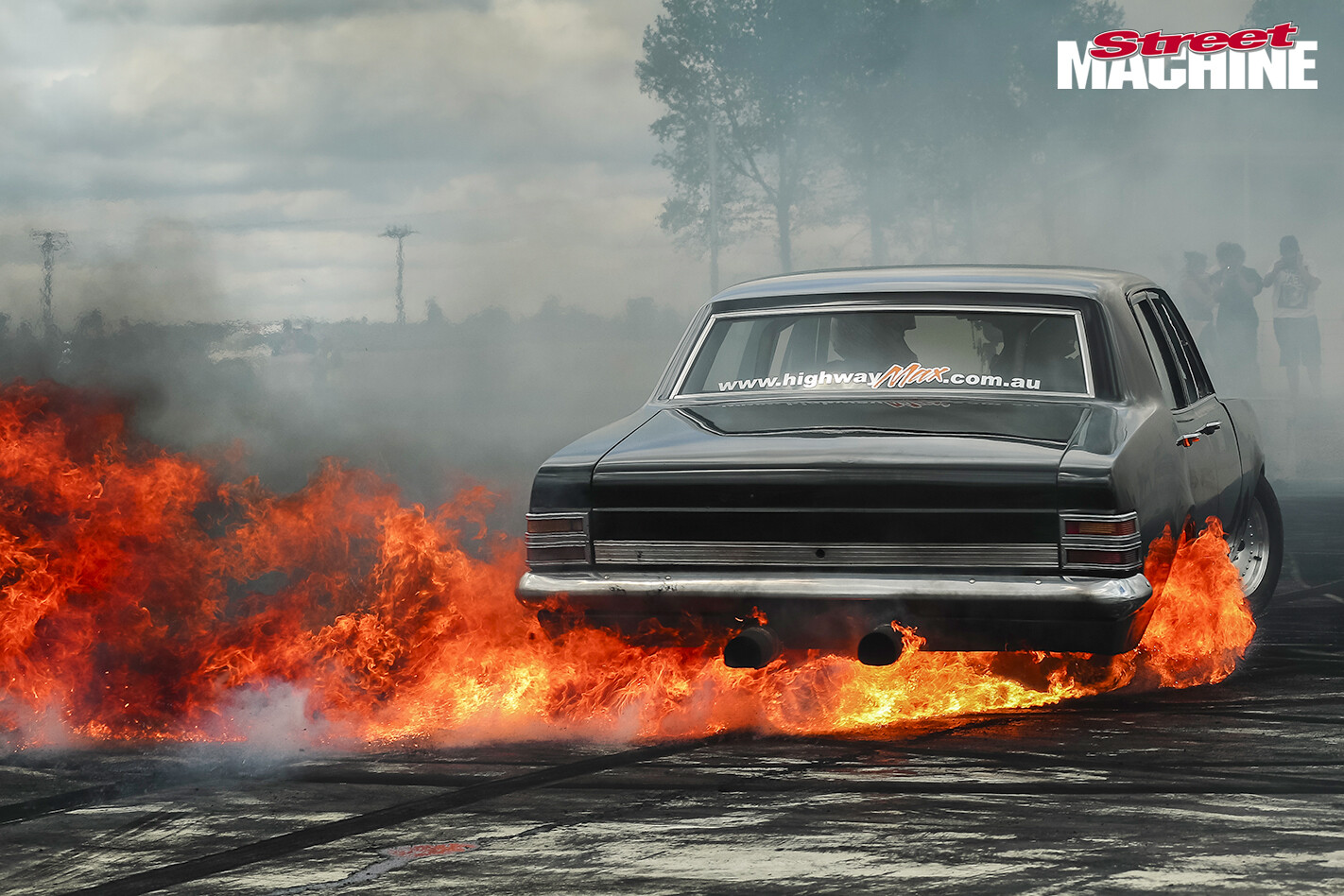 While some of our Aussie cars are tearing it up in NZ, some of their best burnout guys are here in Australia. A crew of cars and drivers took on Tread Cemetery last weekend, with some staying on for Street Machine Summernats 30 in January.