BURNOUTS AND SHOW & SHINE AT SPRINGNATS 2016

A BUMPER crowd flocked to the 24th running of Springnats in Shepparton to catch the wild burnout action, driving events, street cruise and all the latest show cars on display. Adding to this year’s festivities, the EJ-EH Holden Nationals were also held in conjunction with the Springnats inside the Shepparton Showgrounds. 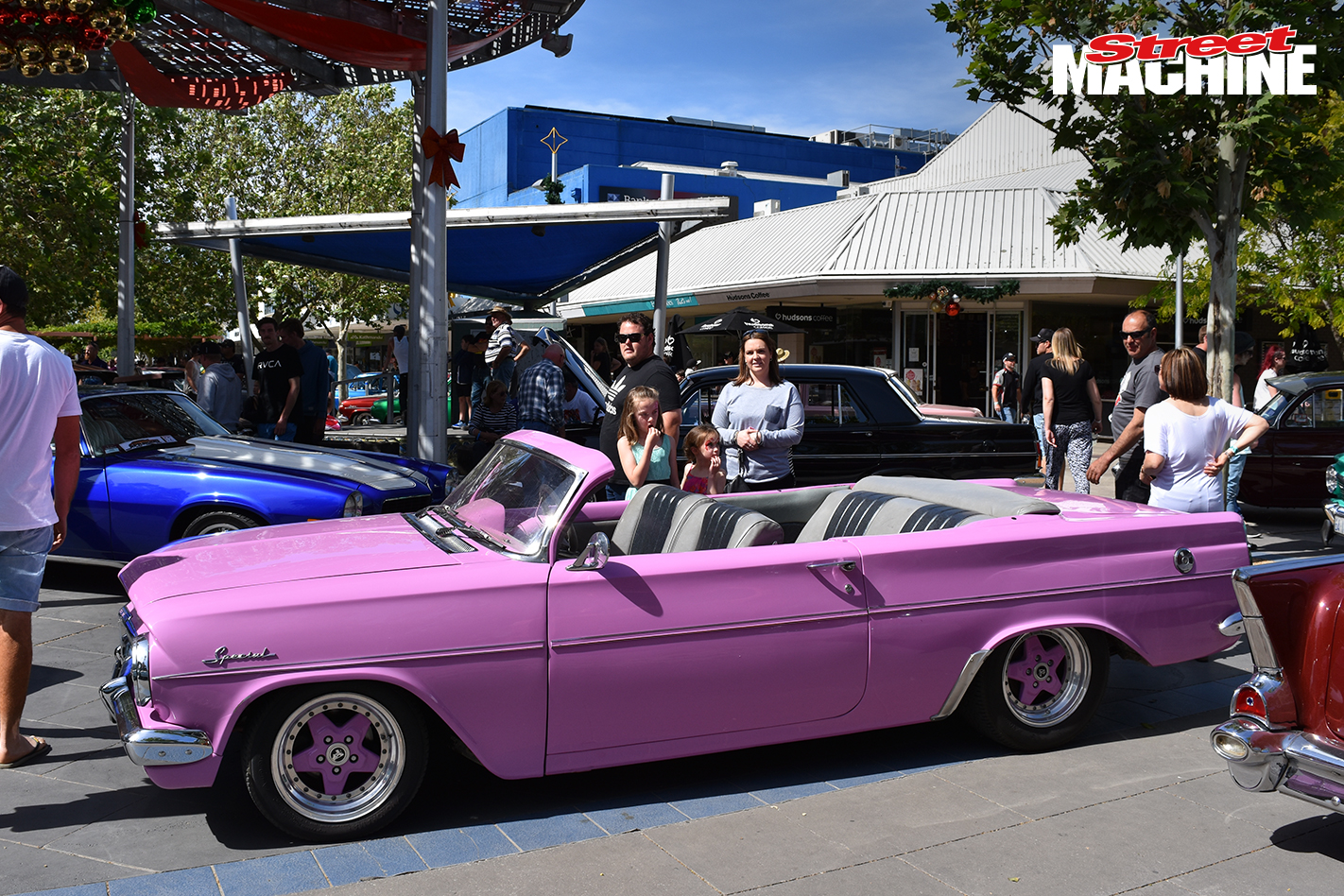 To top it off, event director Les Adams announced some huge news for next year’s event. “The Autofest crew are going all-out next year and putting on a seven-day event for the Springnats’ 25th anniversary,” he said. Yep, that’s right, a whole week of Springnats goodness!

Here’s a quick look at some of the cool cars and burnout winners from this year’s action-packed event. 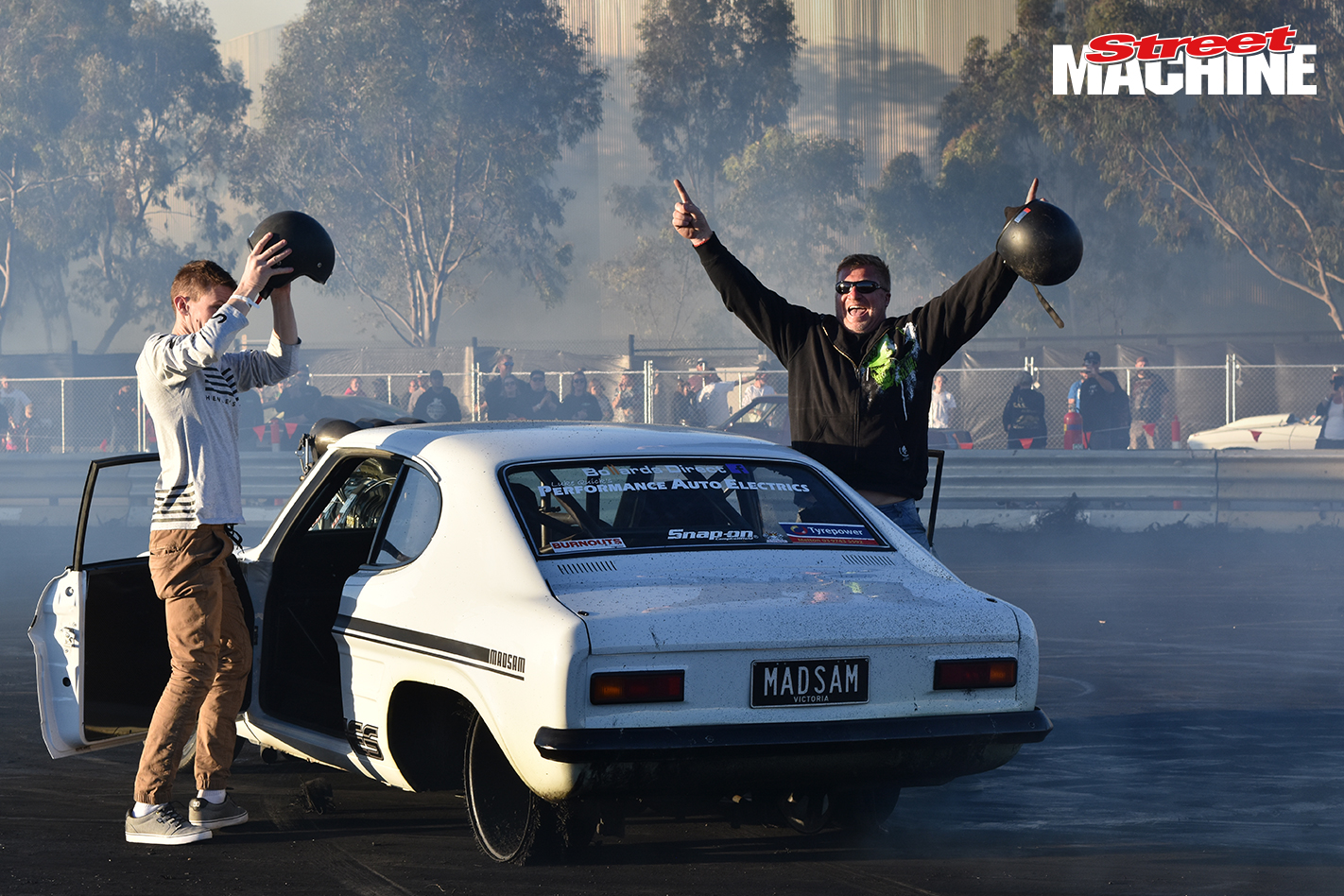 First place in the Pro class and winner of Best Burnout Overall went to Sam Surace in MADSAM. The Capri didn’t miss a beat, and Sam drove like a man on a mission, putting in consistent performances all weekend. But he saved his biggest and best for the finals to take a well-deserved win and $2500 in prizemoney. 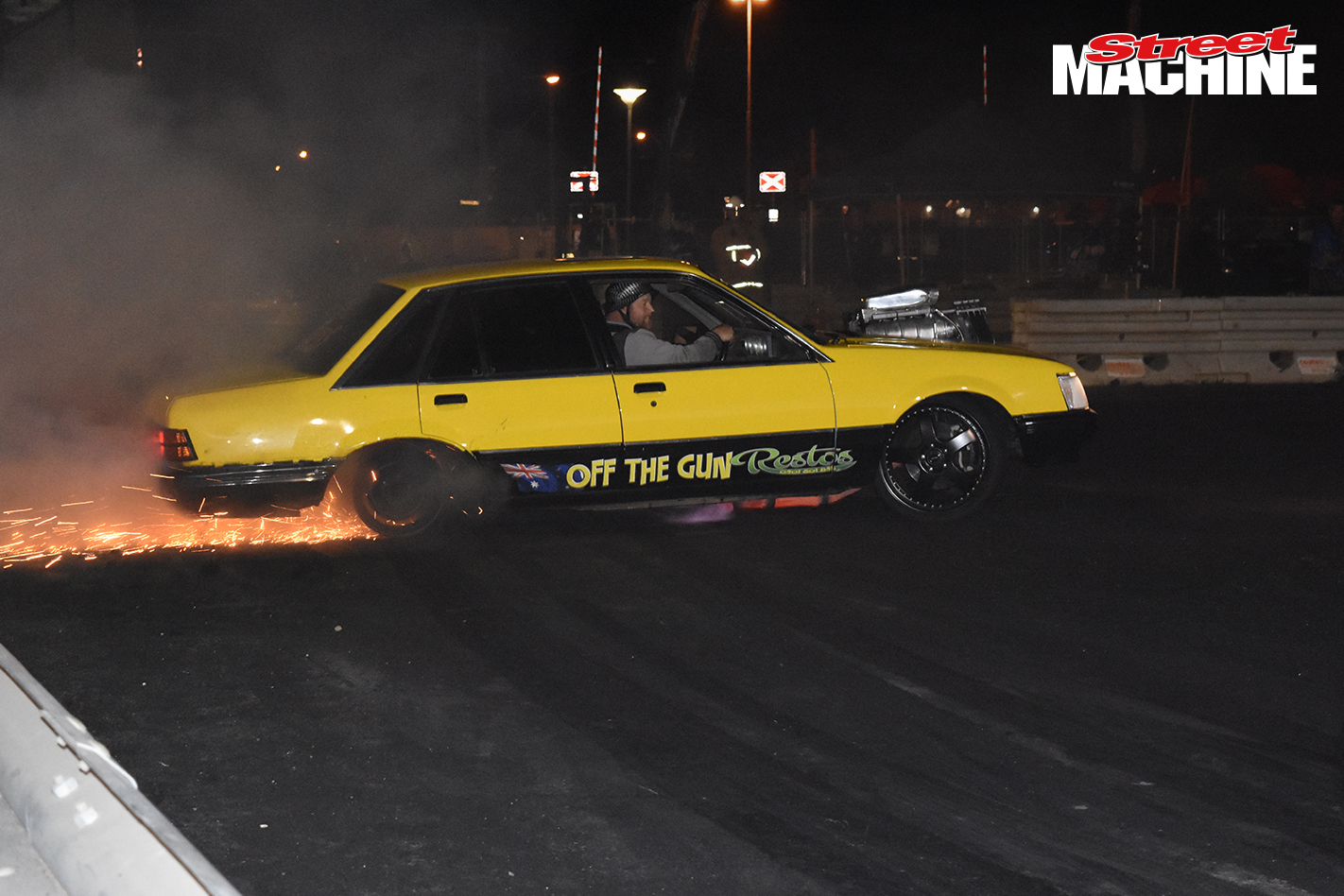 Rick Fuller in LSONE had the sparks flying when he took out the Friday expression session. He came second overall, as well as grabbing second place in the Pro class of the burnout finals. 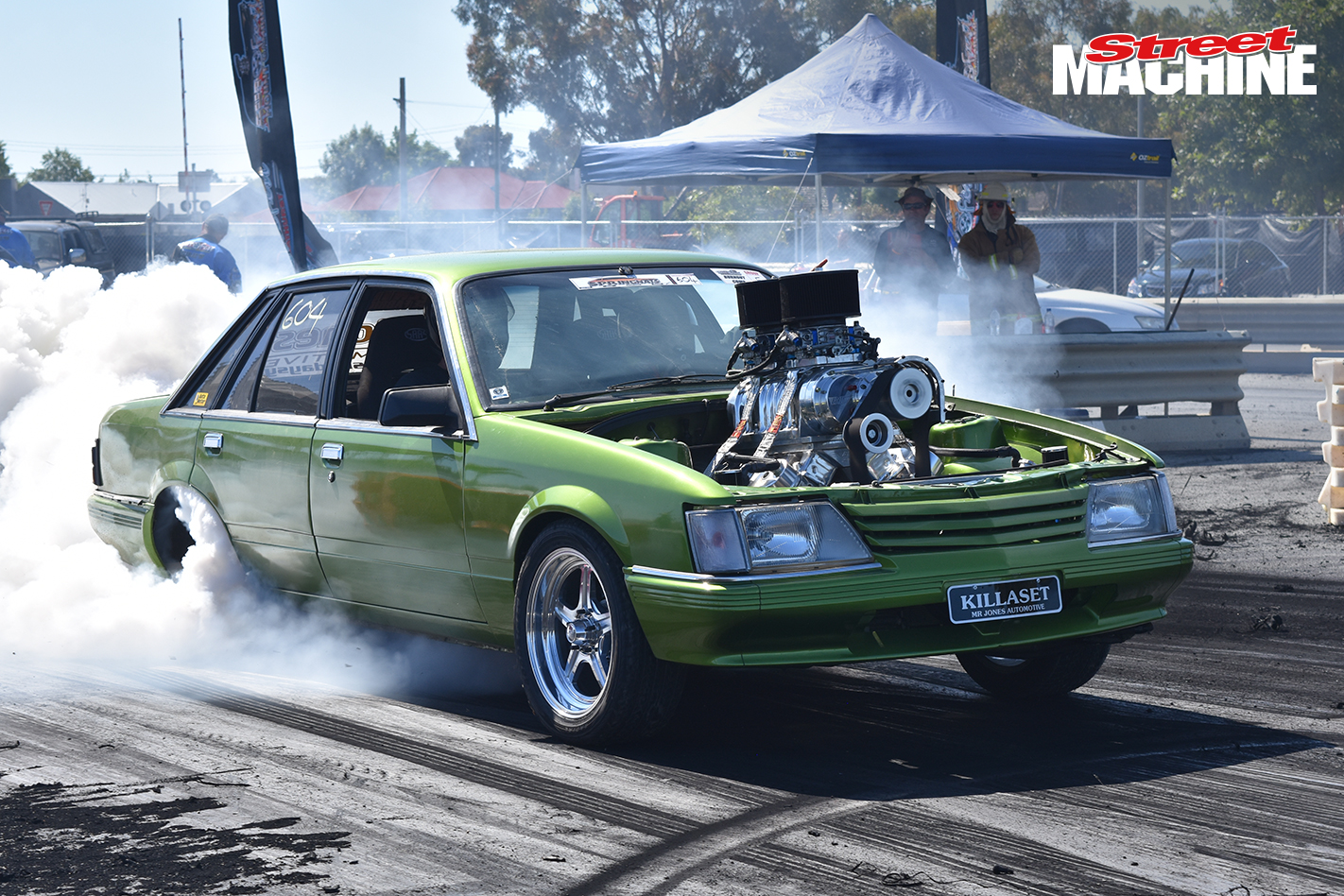 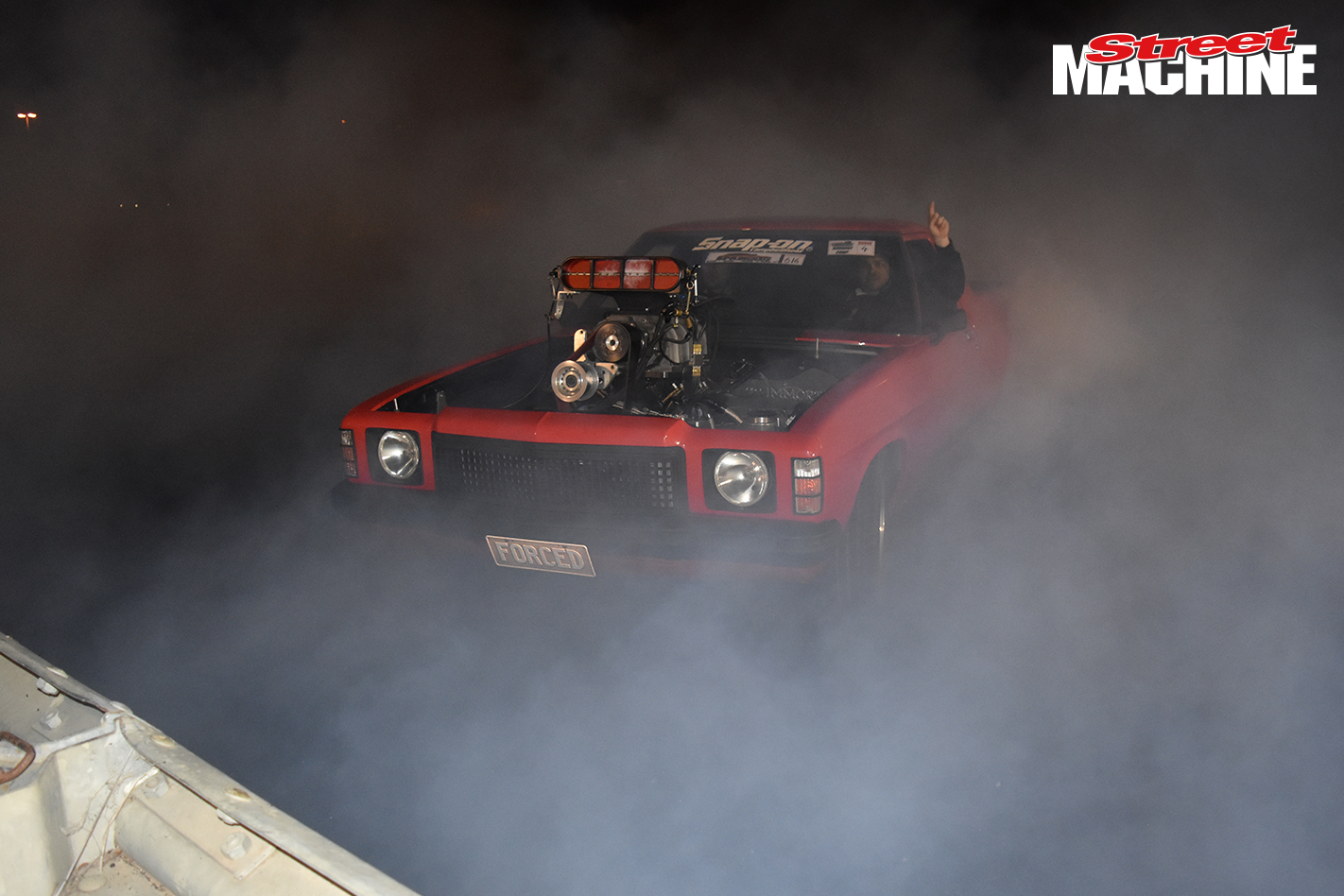 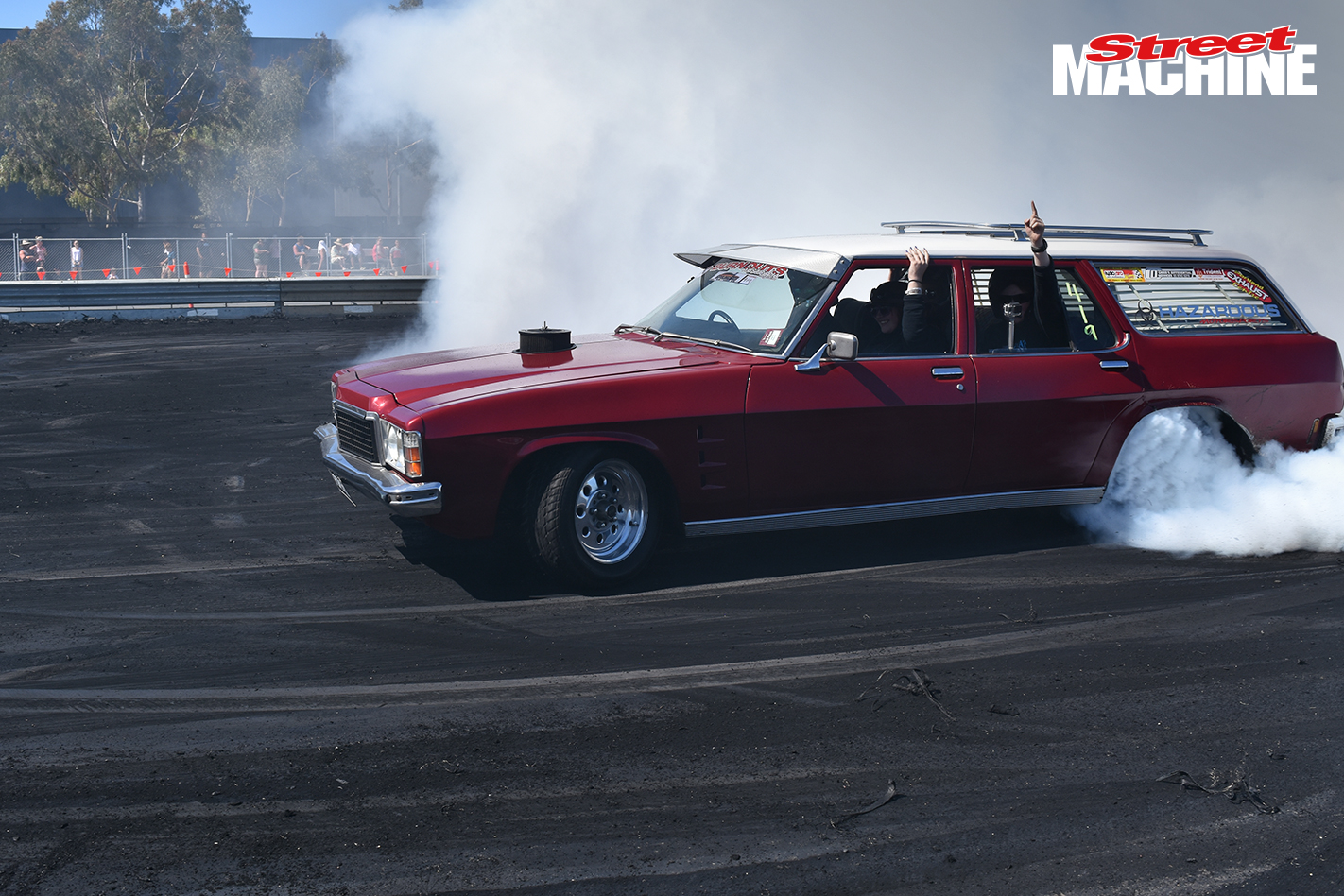 First place in the Aspirated class and third best burnout overall for the weekend was Andrew Chapple in POPS-HZ. Andrew threw the wagon from one end of the pad to the other, punishing the HZ at full noise to beat most of the blown injected heavy-hitters and take home $2500. 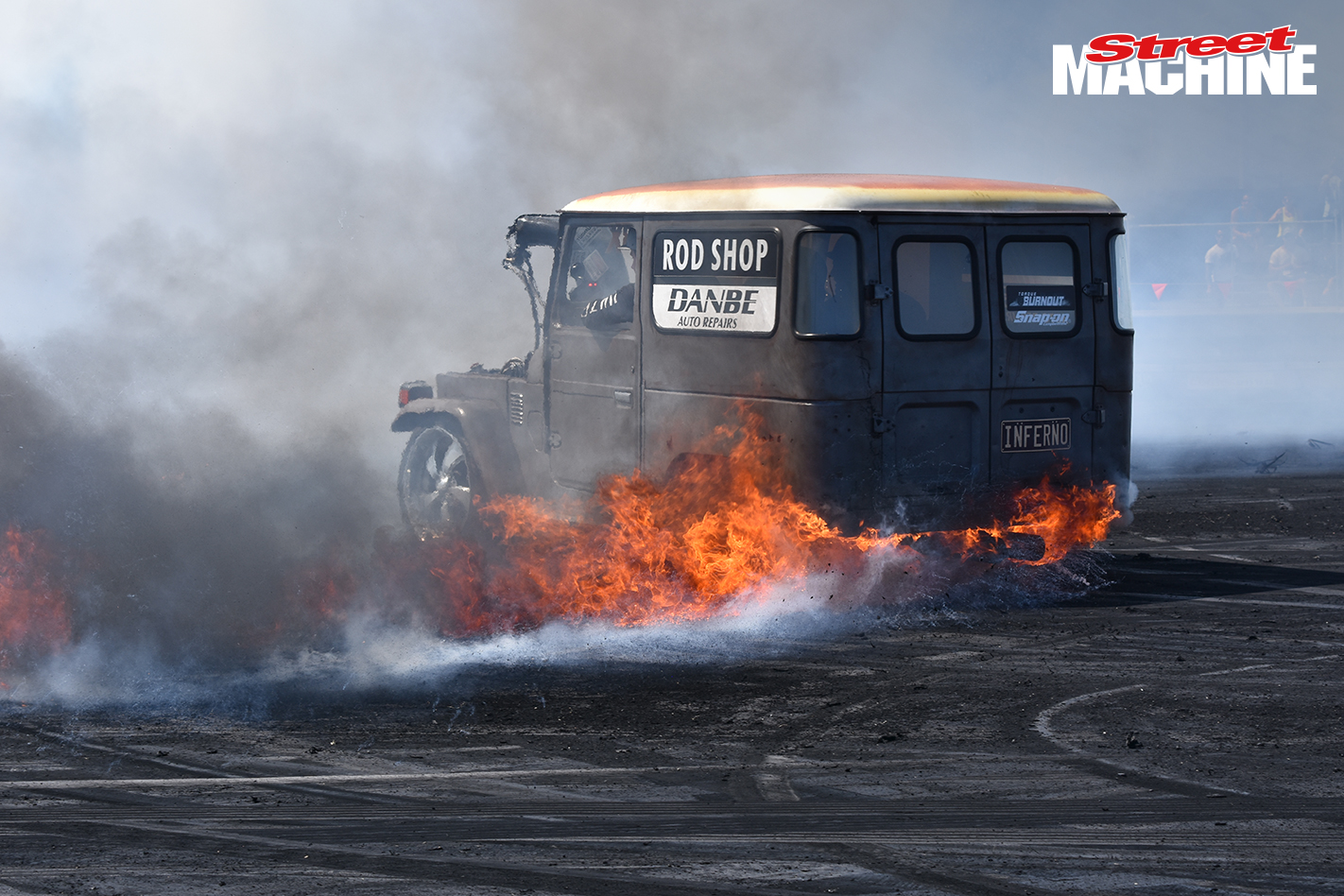 Thomas Beltrame in the INFERNO FJ40 Land Cruiser was one of the big names at Springnats this year, and he always turns it on for the crowd. His Cruiser was in with a good shot for the win, but after two fires in the finals he was out of contention. That didn’t stop him from having a blast though. As soon as the marshals had the fire under control for the second time, Thomas finished the job properly, smashing the FJ40’s tyres in style before driving off to the biggest cheer of the weekend. 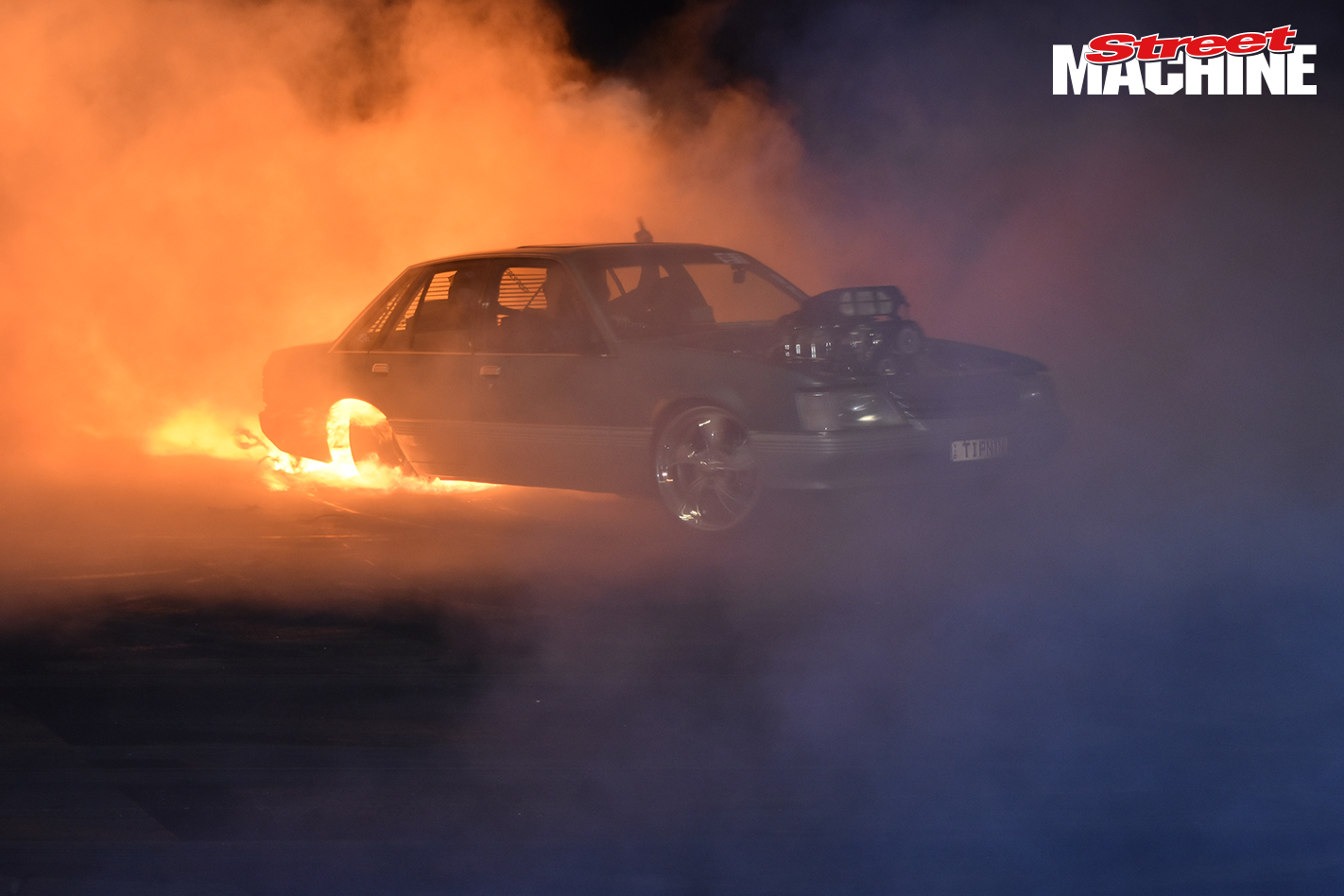 Bryan Smilie setting the pad alight in his TIPNIN VK Commodore during the Friday-night expression session. 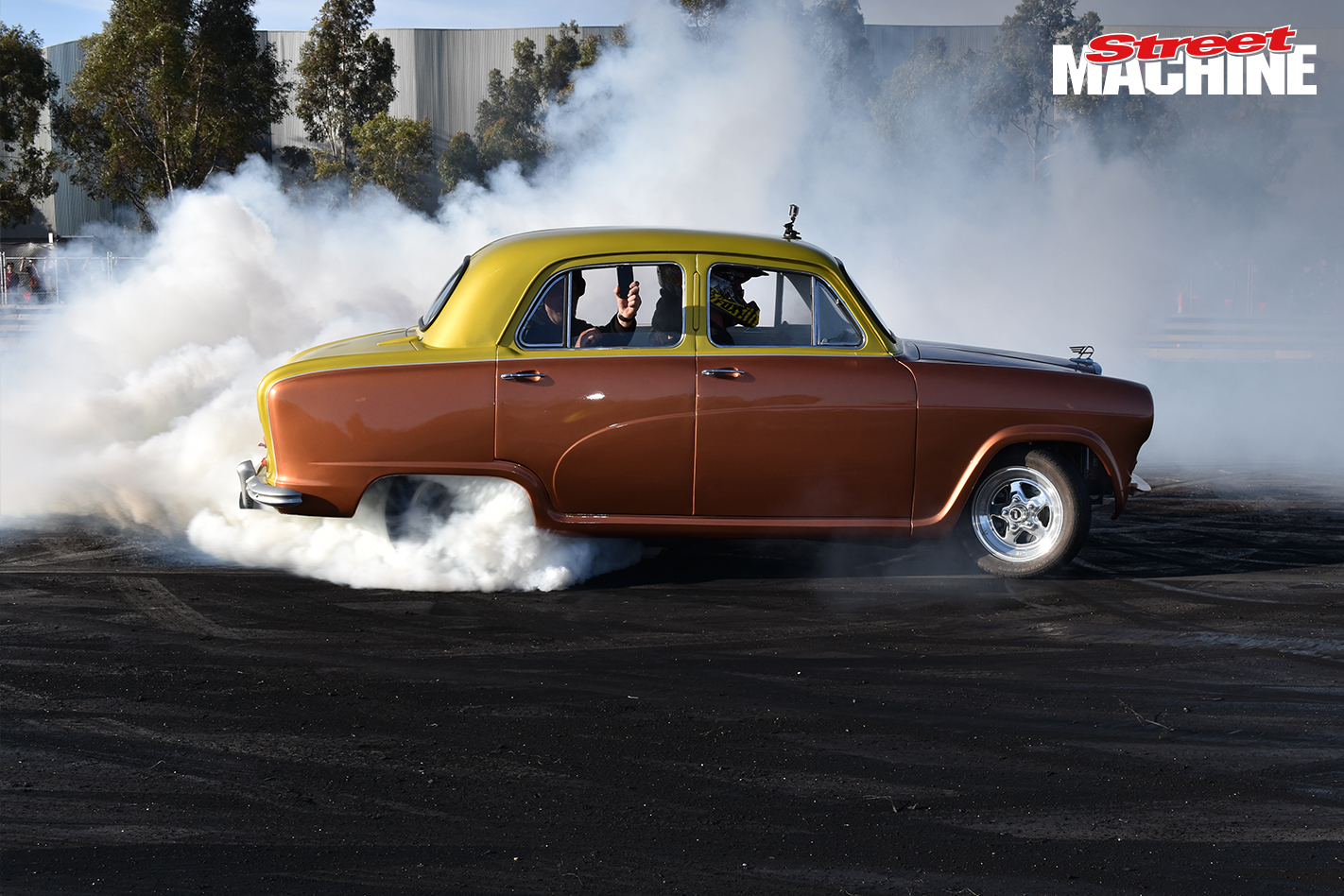 Tim Barby originally brought his Austin A40 for $100 with the intention of turning it into garden art. “I was sitting around having a few too many beers with some mates and they bet me I couldn’t turn it into a burnout car – so I did,” he said. “It’s a home-built car; I started by fixing the rusty bodywork and then recessed the firewall to fit the LS and Turbo 350. The rear end’s tubbed with a nine-inch, while the front end came out a Gemini at the scrap yard and the steering is out of a paddock-bomb VN. The interior is all done in black vinyl from Spotlight – it was the cheapest stuff I could find! I stitched it all together on my sister’s sewing machine – I’d never even used one before so I’m surprised how well it came out.” 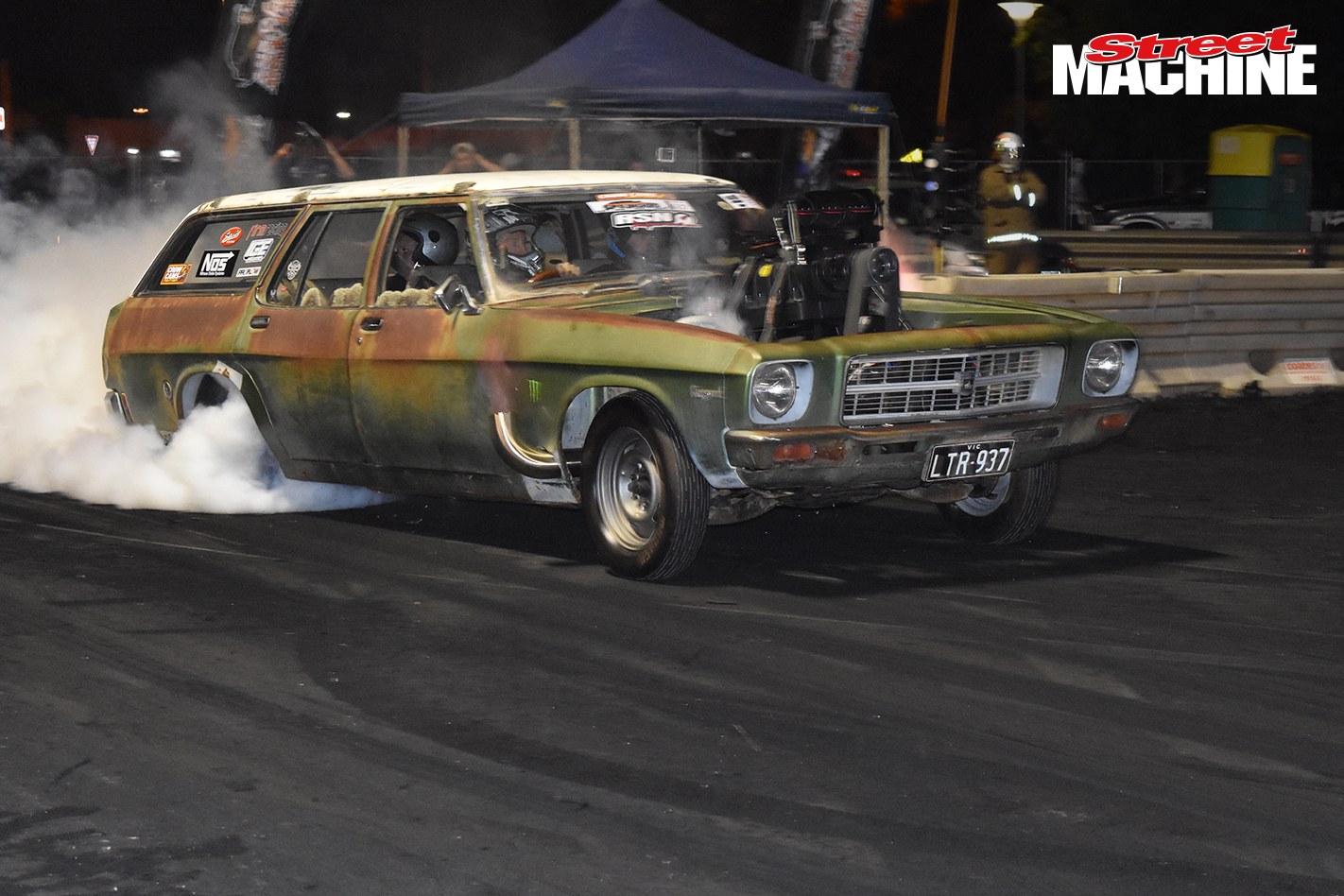 Carl Thorne is a Shepparton local and Springnats regular. His wild blown and injected HQ wagon was only finished the night before the event after a two-week build, and suffered some teething issues. With 58psi of boost showing on the gauge, the 350 small-block Chev was getting way too much air from the 14/71 blower and backfired shortly after the first hit of the throttle, ending Carl’s qualifying burnout. He returned for the finals, but suffered the same fate. 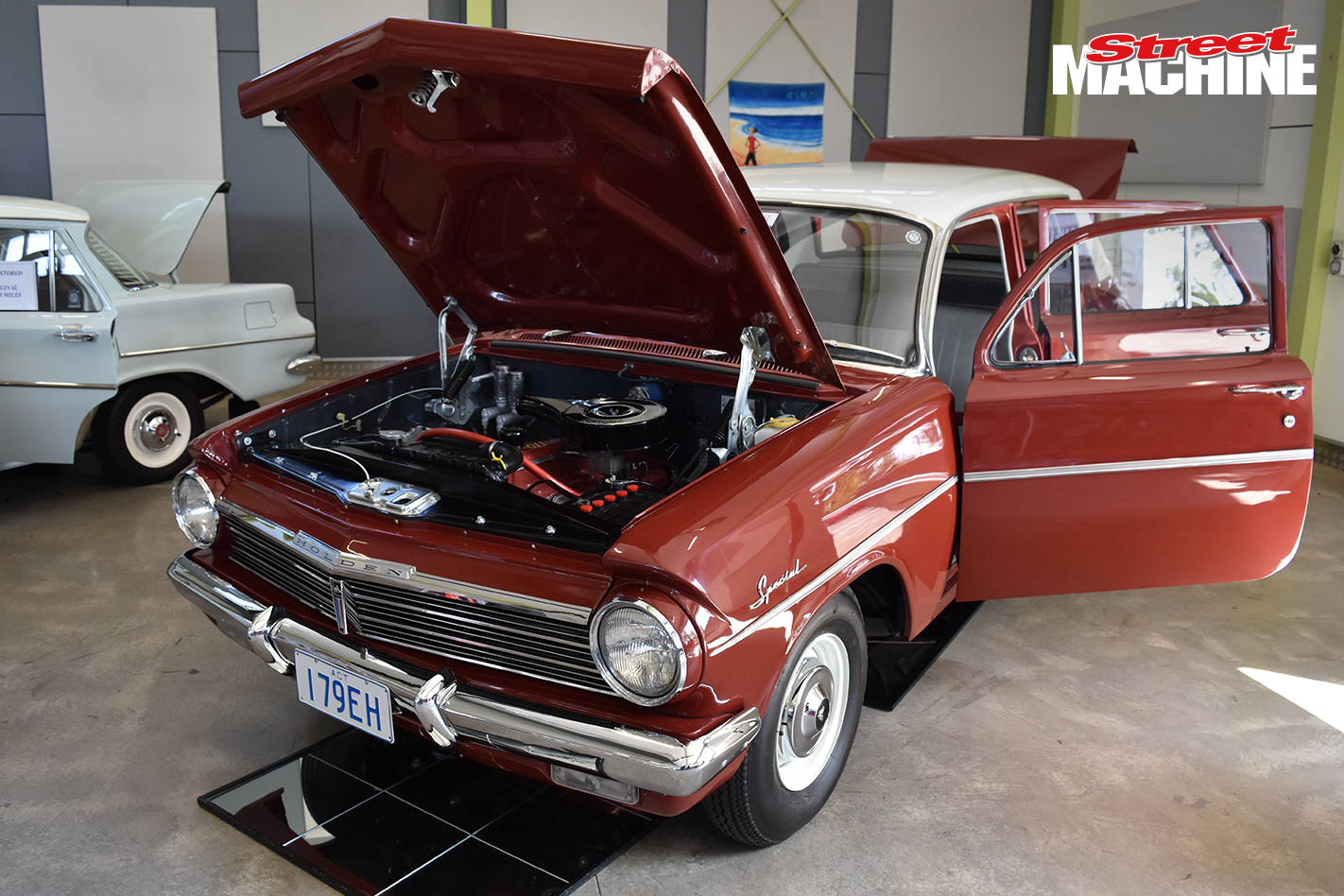 Around 80 entrants gathered from all over Australia for the EJ-EH Holden Nationals, held in conjunction with the Springnats over the weekend at the Shepparton Showgrounds. Two standout cars among them were Harvey Miles’s ultra-rare EH S4 and his unrestored EJ with only 28,000 miles on the clock. The EH is one of three that went to race at Bathurst in 1963 and was the Brian Muir/Spencer Martin back-up car. The EJ is a time capsule from the 60s, with NASCO accessories throughout, and still rolls on the original crossply tyres. 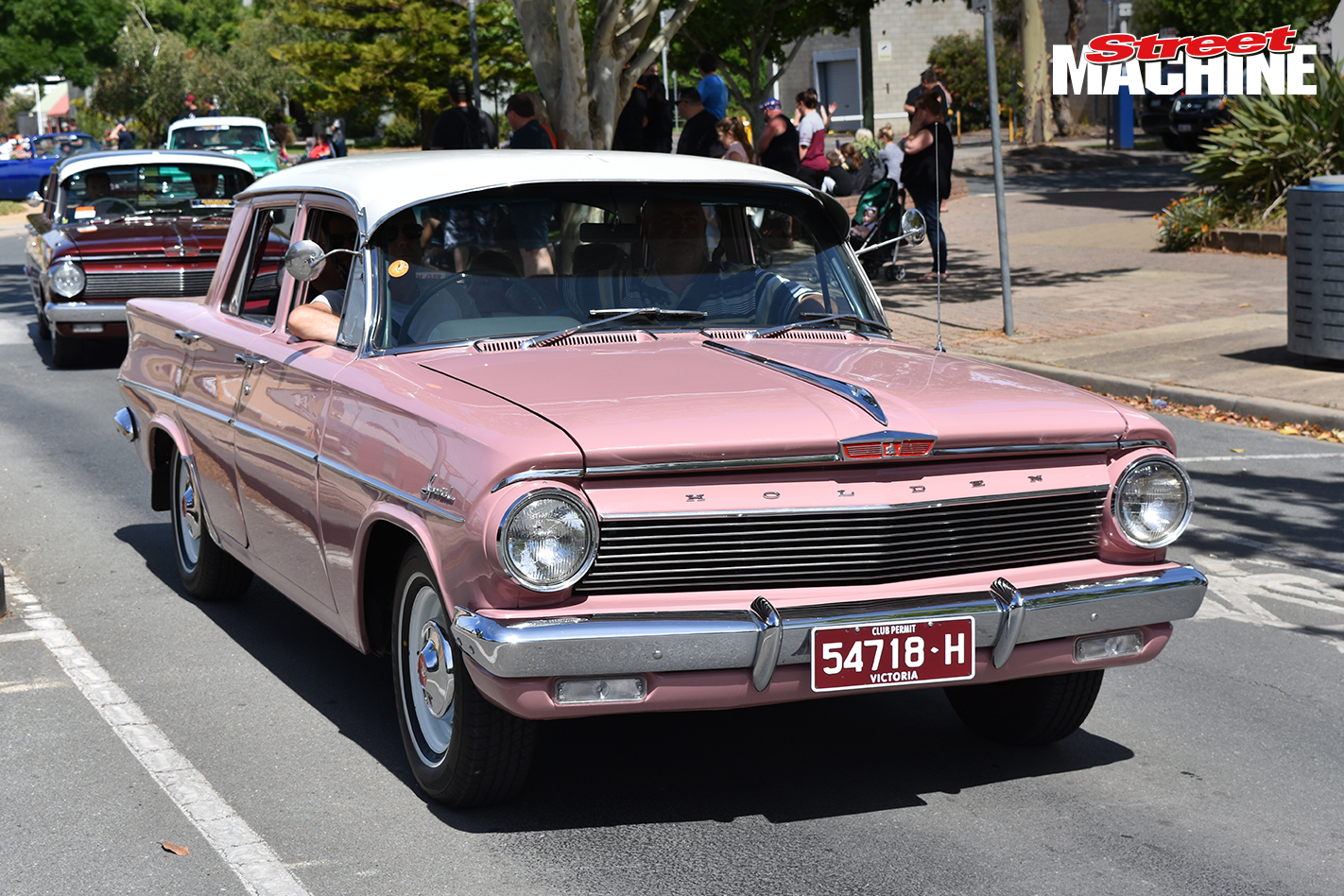 Cars from the EJ-EH Holden Nationals led the procession to the Maude Street Mall for the street show ’n’ shine. 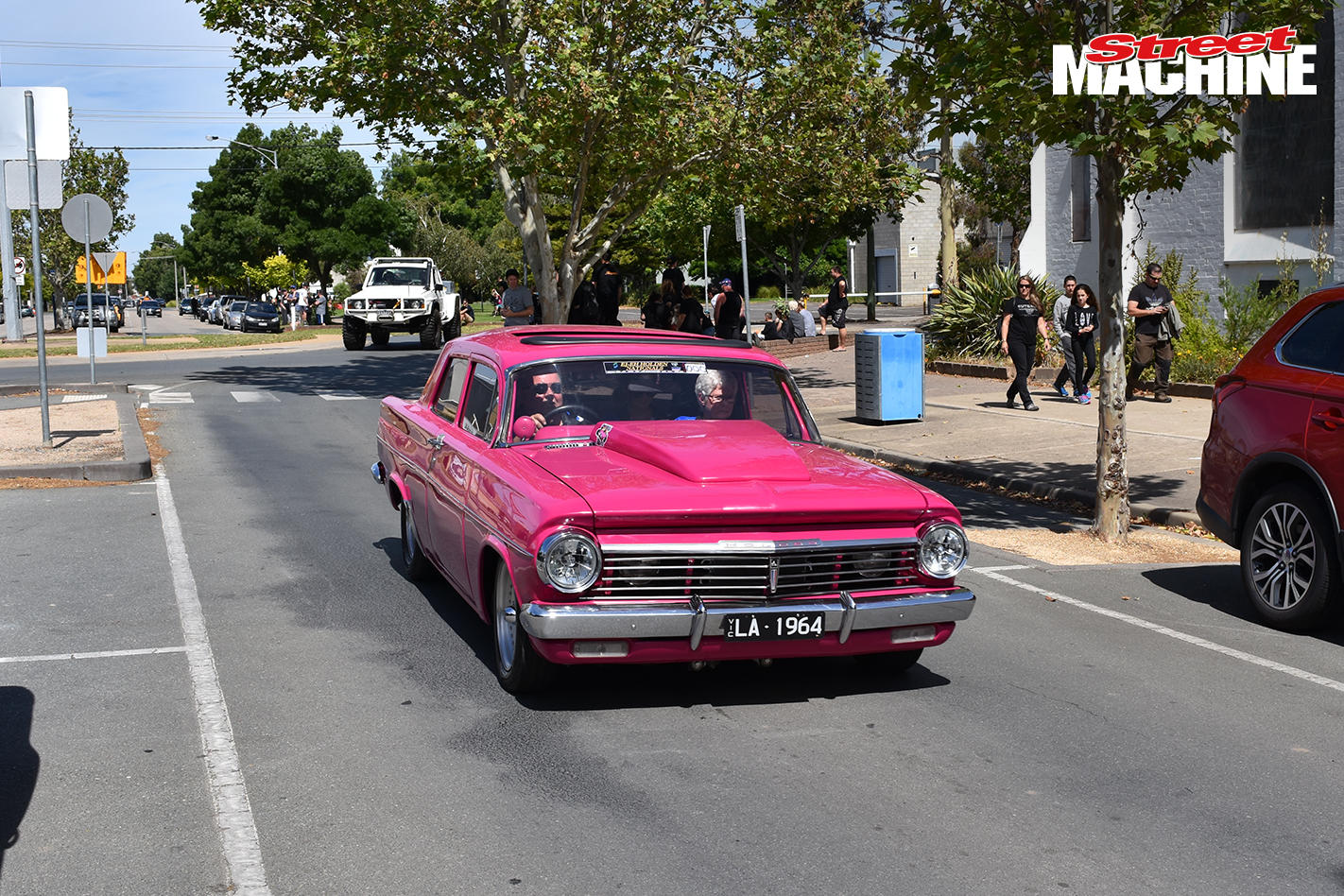 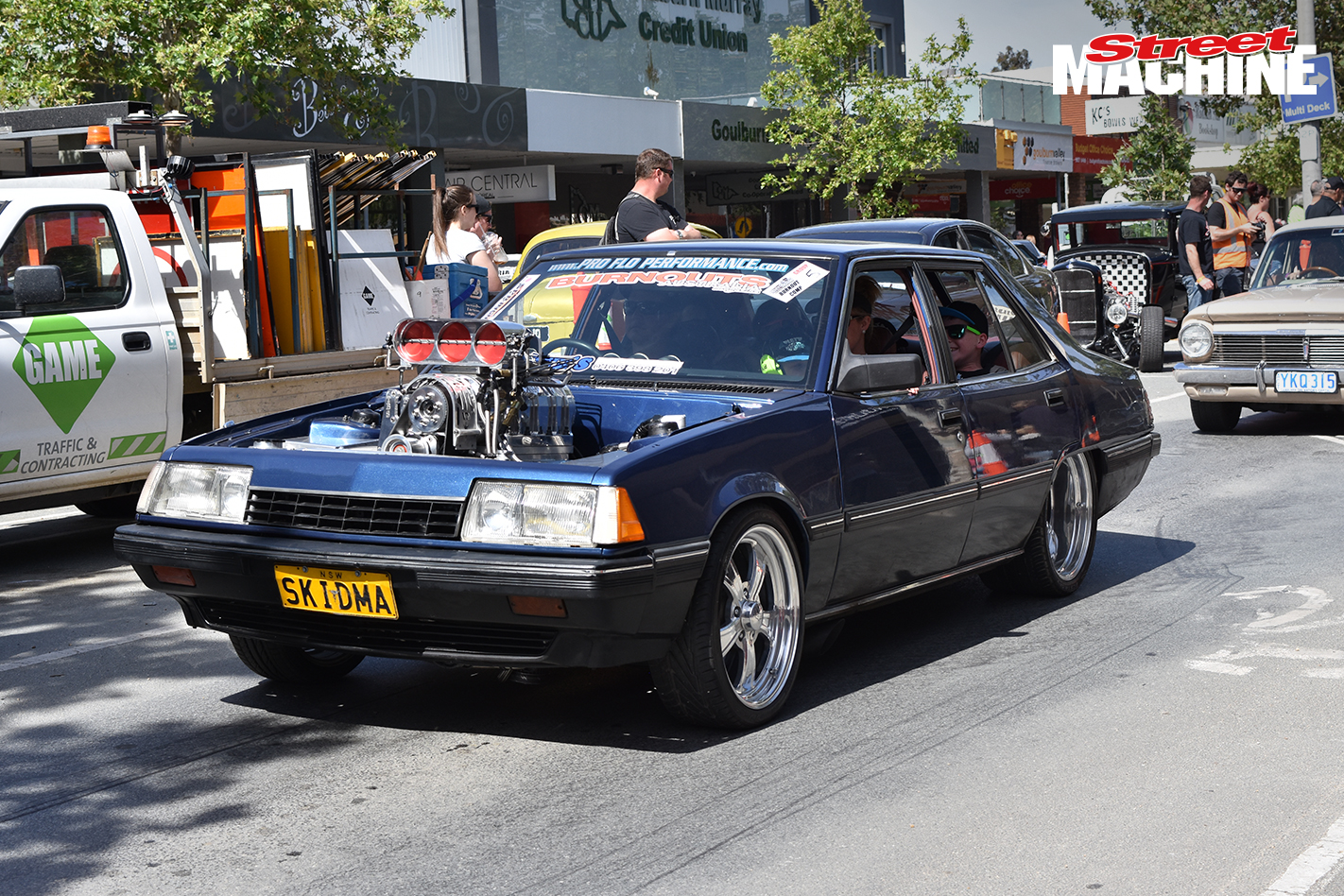 Adrian Cuthbertson and the SKIDMA family hit the streets of Shepparton in the blown injected Sigma. 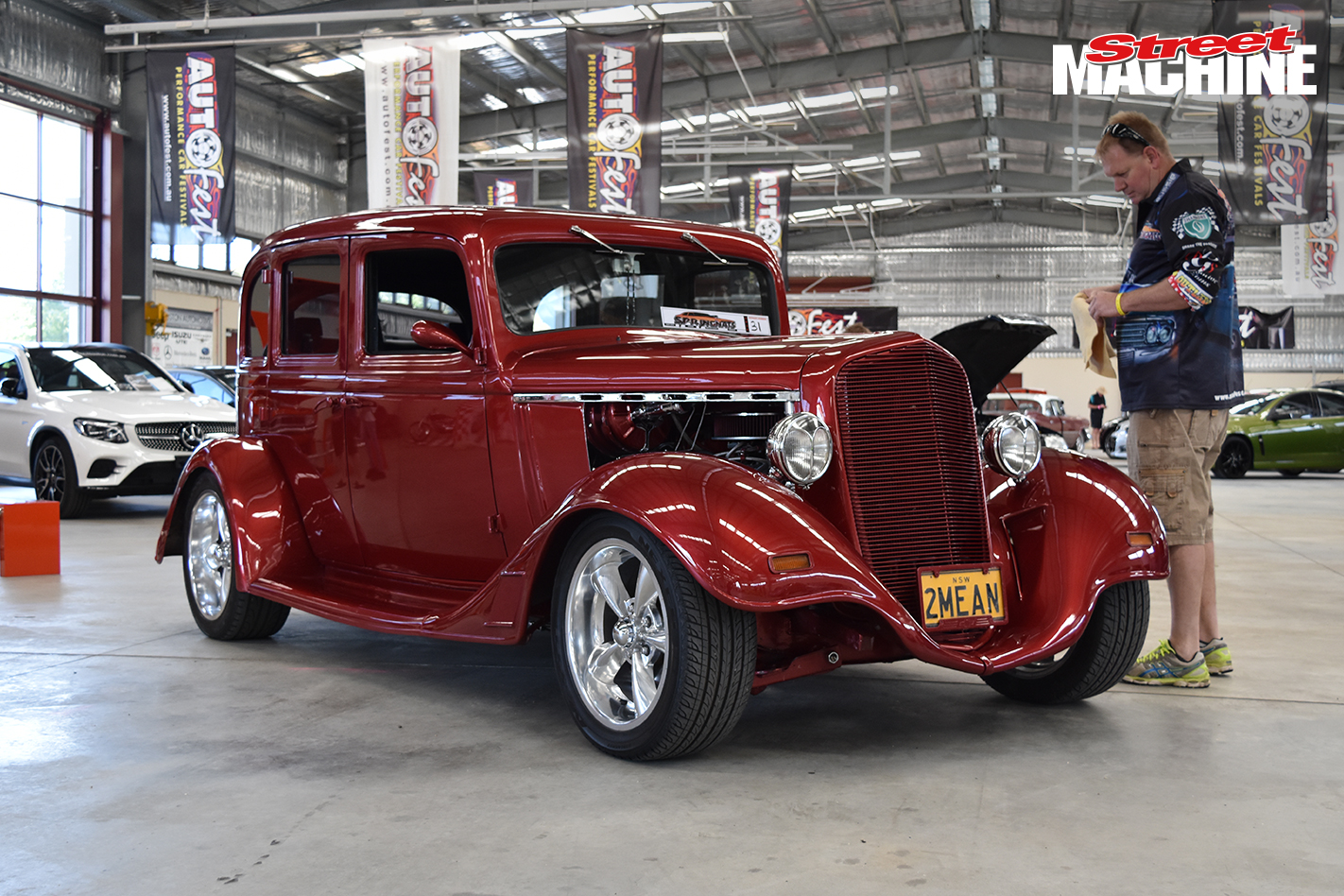 Gavin Gilbert giving his ’34 Chevrolet sedan a final detail in the show hall before the crowd rolls in. The Chev took out a Top 10 spot, Best Hot Rod and Overall Champion (pre-1948) at the event. 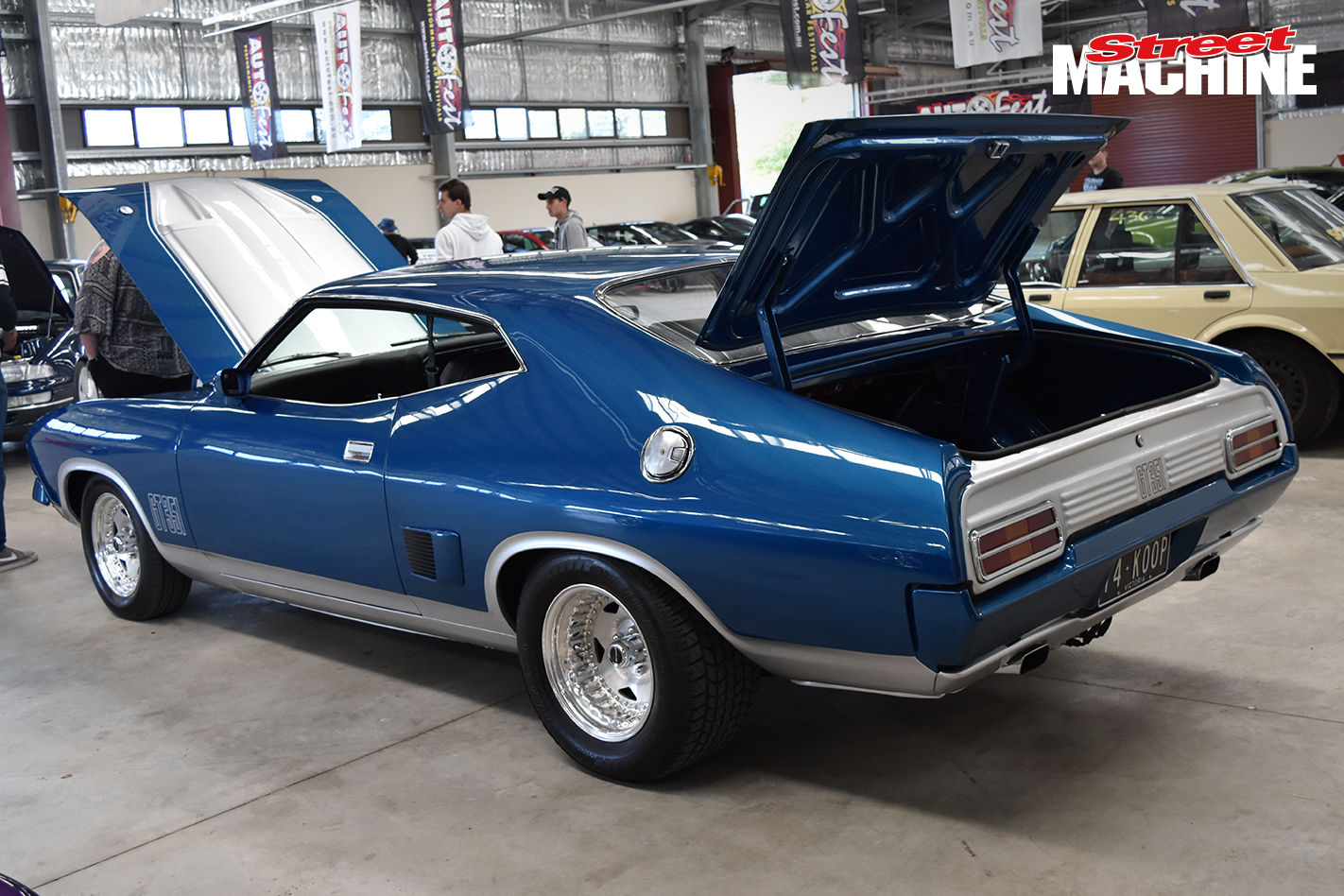 Kim Argaet’s ’74 XB GT tribute started life as a GS hardtop. The car took home a Top 10 placing, Top Street Coupe and Top Engineered at this year’s Springnats. The car has been on the road for five weeks following a 4.5-year rebuild. Under the bonnet is an all-alloy 427ci Windsor with a TCI built C4 auto putting the power through to a nine-inch rear end. The paint colour is a modified version of the factory Apollo Blue, with the decals painted rather than stuck on and then clear-coated over for a smooth, seamless finish. 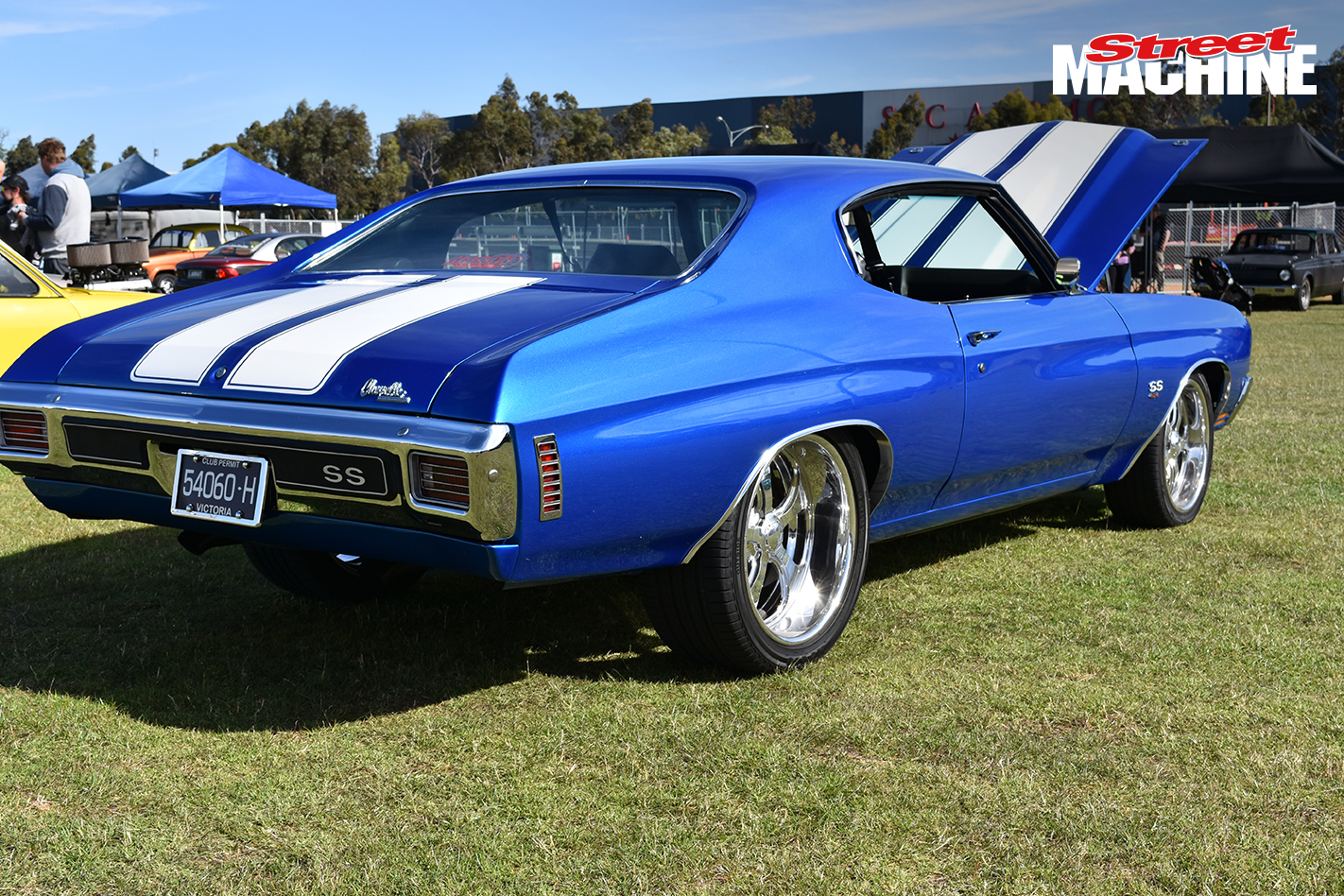 This 1970 Chevelle SS pro tourer was one of the stand-outs of the show ’n’ shine and bagged a Top 10 spot and the Promoter’s Choice award. Owner Troy Ryan removed the tired big-block and fitted a rebuilt LSA that makes 470hp at the treads. 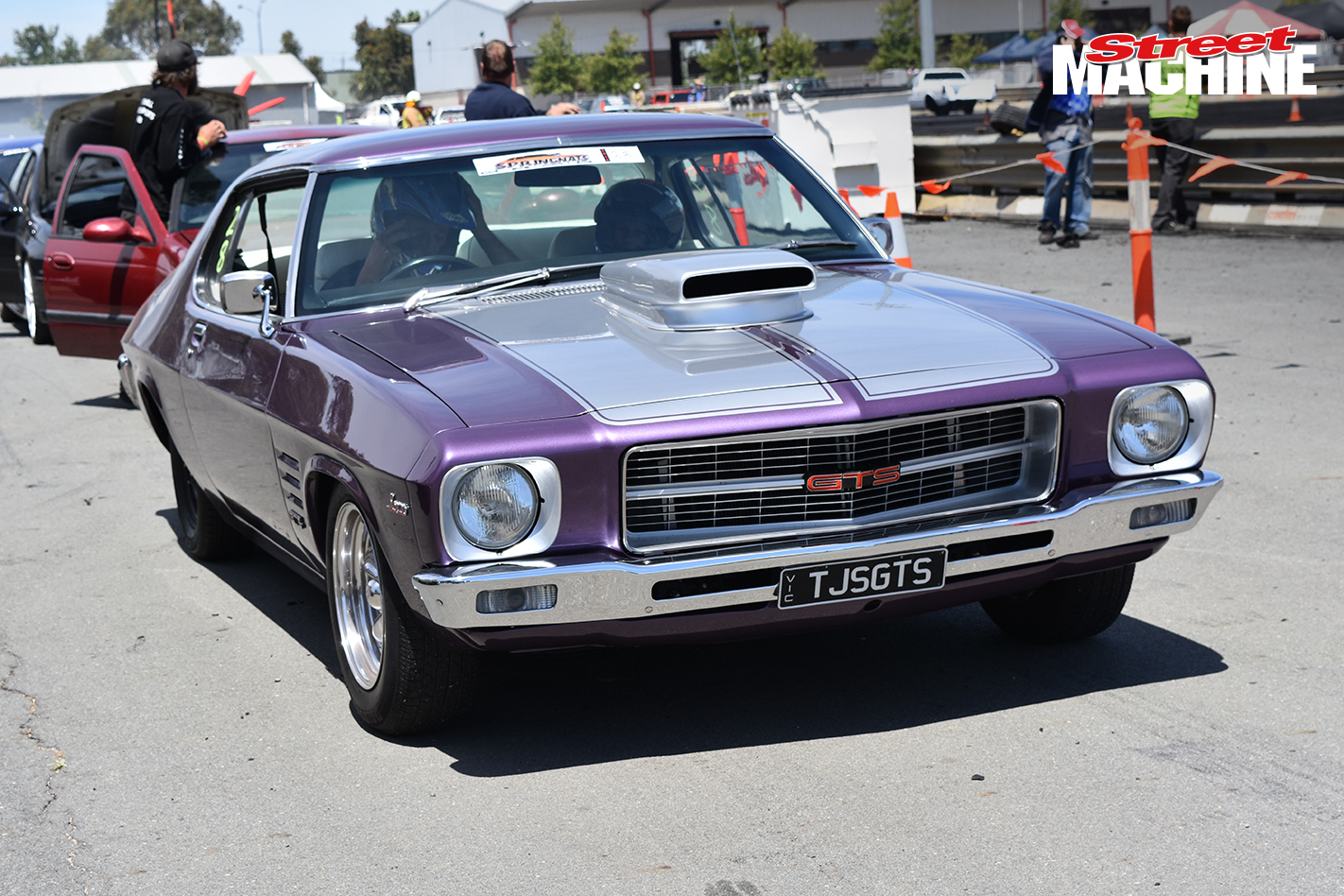 Justin Bartolo has built this 1972 HQ GTS coupe for his daughter Tianna. Running a 400ci small-block Chev with a Trimatic three-speed and a nine-inch differential, the car is immaculate and took out the Overall Champion (post-1948) and a Top 10 spot. 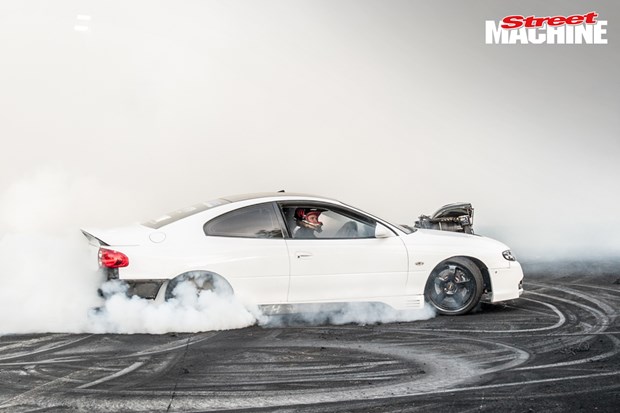 Burnouts, cruising – and ride-on mower racing? Yep, there was all that and more over in WA for the 24th annual Narrogin Revheads 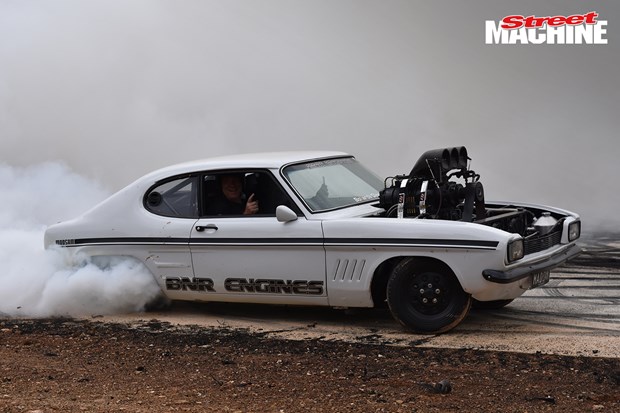 Castlemaine Rod Shop’s annual open day was bigger, better and louder than ever 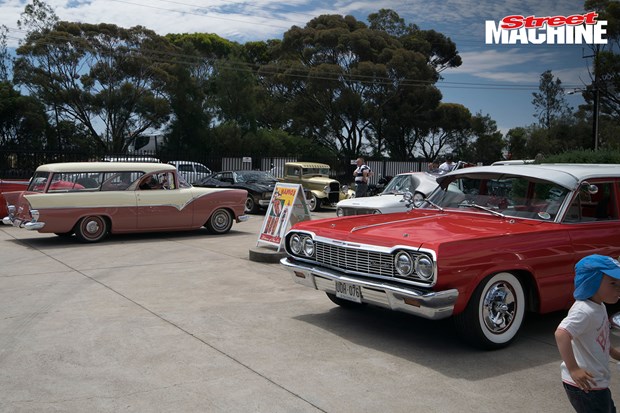