WHEN it comes to holding an open day, the folks at Castlemaine Rod Shop sure know how to put on a spread. Held on Saturday 12 November, this year’s free annual event featured hourly burnout displays, a show ’n’ shine, workshop tours, as well as live music with a bar and barbeque. Inside there were guided workshop tours throughout the day, with CRS staff on hand to explain all the latest innovations and workshop services as well as offer advice on the huge array of components on display. These included the range of Ultimate Control custom front end kits, chassis and engine conversion kits, complete nine-inch diff conversions, custom bellhousings, Wilwood brakes and HQ-WB bolt-in rack-and-pinion power-steering kits, just to name a few. There’s nothing quite like seeing the components in person to get a proper understanding of how things will fit and work on your car. The weather may have been a bit dreary, but that didn’t deter the spectators; the crowd was even bigger than last year, and with the Bendigo Swap Meet on only half an hour away, people were dropping in from all over Victoria and interstate to catch some of the action.

And when it comes to action, CRS doesn’t do things by halves. They stepped up the burnout demos a notch this year by installing a purpose-built pad next to the workshop, with four top-class burnout cars putting on some massive smoke shows for the crowd. Steve Nogas hit the pad in KILLA-B, but things came to an abrupt end when the 16/71-supercharged big-block Chev chewed threw a blower belt. The same issue has brought Steve’s burnout to a halt at the Red CentreNATS a few months earlier. On close inspection, a clearance issue between the blower belt and the belt guard appeared to be the culprit. The guard was removed and a new belt quickly fitted in a mad thrash by Steve’s engine builder and tuner Brett Niddrie from BNR Engines. Steve headed back out onto the pad and it was all smiles after he smashed a set of tyres in double-quick time.

For KILLA-B’s final skid of the day Steve handed the keys over to Brett, who somehow managed to squeeze himself into the tight confines of the Camaro’s interior. Even with his helmet jammed against the rollcage and barely able to turn his head left or right, he still had no trouble smashing a set in his first time behind the wheel. 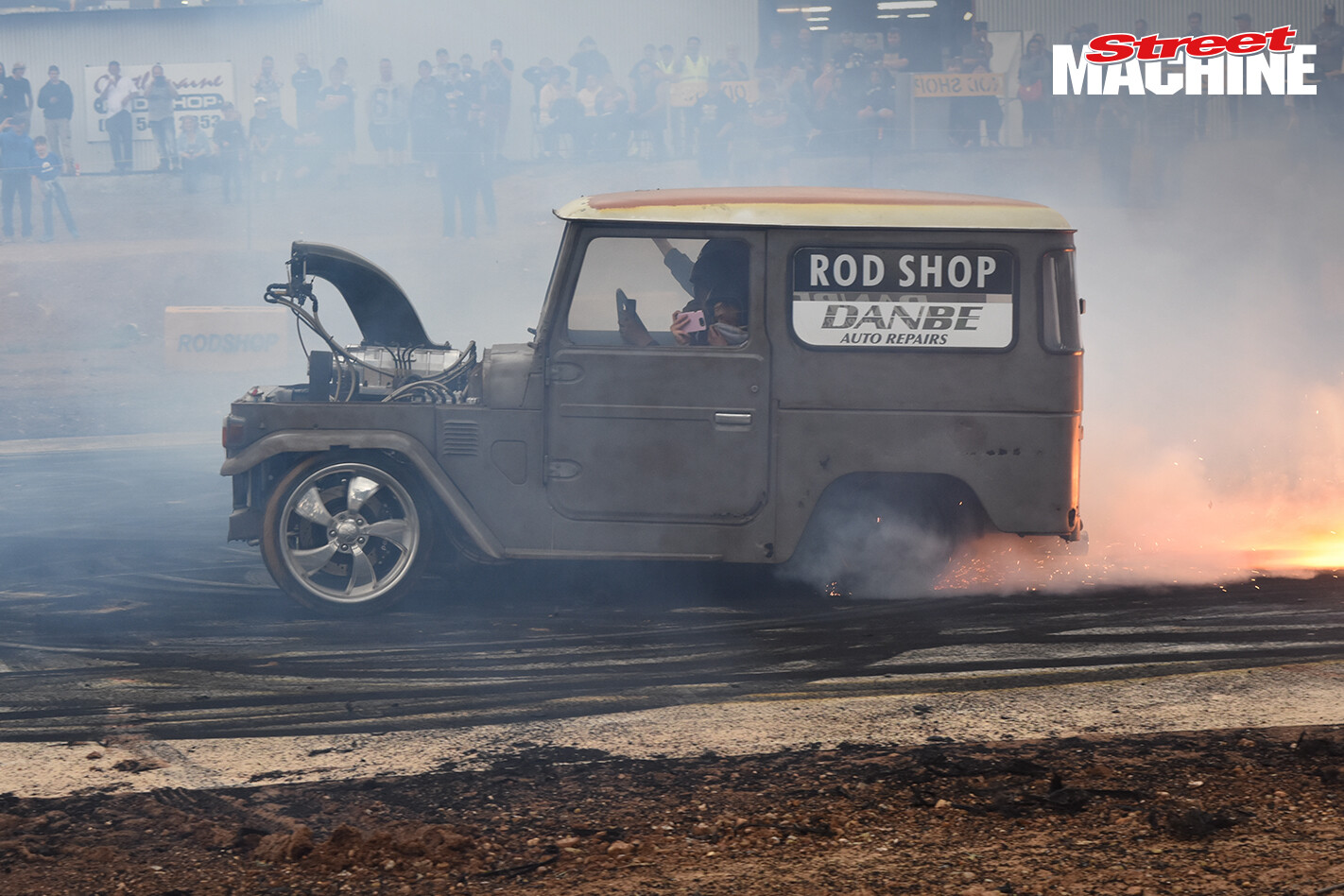 Thomas Beltrame likes to party hard in INFERNO and had a ball tossing the Toyota around the burnout pad at full noise every time he went out. The short-wheelbase FJ40 spins on the spot like a bottle top, and is powered by a blown, injected big-block Chev from the BNR workshop, this one running an 8/71 and carbonfibre hat. Just a fortnight after punching his Ford’s nose into the wall at the Bairnsdale Xtreme Powerfest and doing major damage to the front panelwork, Sam Surace had the MADSAM Capri were back in action and looking none the worse for wear. After a busy two weeks repairing the car, Sam was keen to get out and give it all for the crowd, and he didn’t disappoint. The engine was again built and tuned by Brett at BNR, and the little coupe is one of only a handful of blown, injected Ford-powered burnout cars on the scene. Jason Schmidt debuted his THRASHR VH Commodore burnout car at the open day. It was built with the support of CRS and uses their engine conversion kit and extractors. The LS-powered Commodore has just been treated to an intensive 12-month ground-up build. The rear end is tubbed, with a ladder-bar rear clip fitted to a BorgWarner diff. Behind the LS is a full-manual Turbo 400 built by ATS Transmissions. Jason had the VH screaming, until it threw some metal tabs off the driveplate that punched holes through the bellhousing, bringing his fun to an early end. 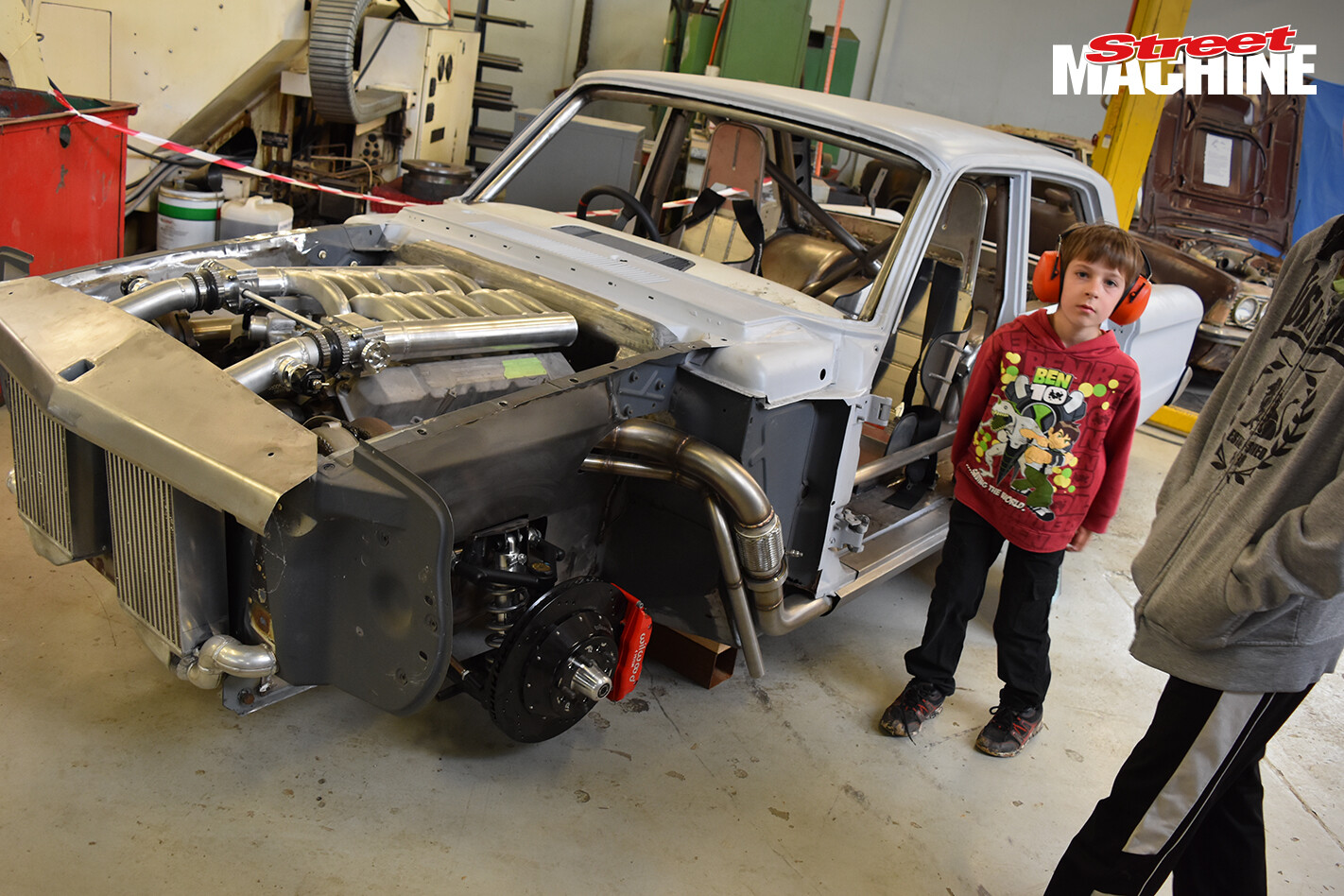 On display inside were two CRS in-house projects. The V10 Viper-powered XP Falcon project was featured in the November Street Machine and attracted plenty of attention, while CRS’s bare-metalled LC GTR Torana has had a major change in direction in the past 12 months, and is now headed for the burnout world. Adrian Stevens drove his ’64 EH ute down from Maryborough to check out the open day at CRS. “I’ve had it on the road as my everyday driver for two years now, but that was after an 11-year rebuild,” he said. The EH is fully engineered and has been re-powered with an L67-supercharged V6 Commodore engine with a T5 BorgWarner manual gearbox. To fit the V6 Adrian used CRS’s engine conversion and chassis connector kits, and did all the bodywork himself.

“When I first got it I stripped it right down and should have just taken it to the tip – it was a rusted-out basket case that was completely rotted away, and nothing but Swiss cheese from the centre bodyline down to the ground,” he said. “Everything underneath has been replaced – the floors, the crossmembers and even all the brace. While it was apart I widened and radiused the rear guards and mini-tubbed the tray and had a VS Commodore diff shortened to fit the 15x10 Weld wheels.” The EH was then painted in the Holden Commodore colour Alto Grey. 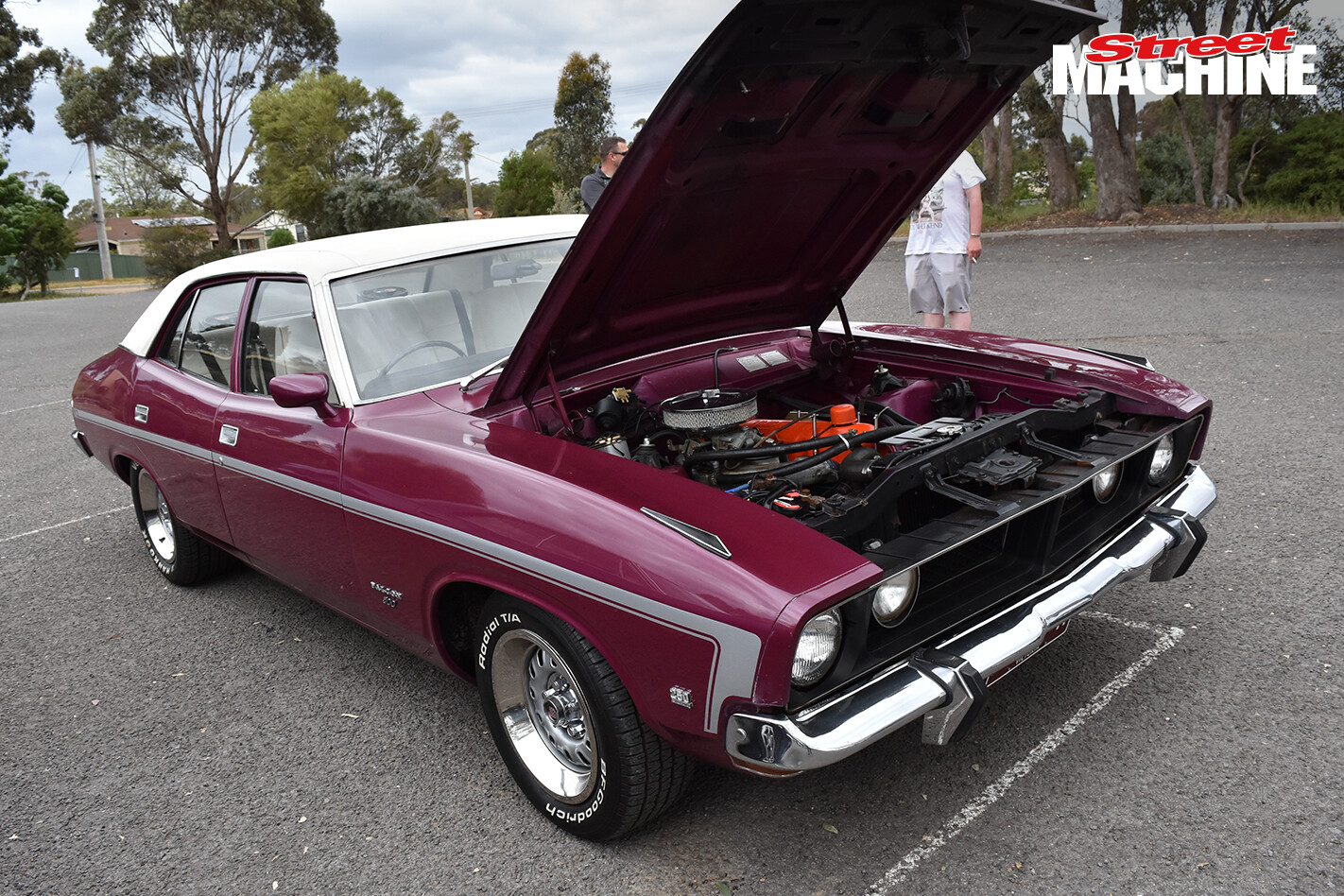 Sporting bright purple metallic paint with a white vinyl roof and an all-white interior, Brian Spurrell’s XB GS just screams 1970s. “I have an XB GT in the same colour at home with a big-block in it, but it’s got a bit out of hand, so I got the GS a little while back. I bought it mostly because of the body – it’s rare to find an original rust-free XB and was in such good knick I just had to have it. Someone tidied the paint up about 25 years ago, and I’ve recently re-done the GS stripes and decals.” The Falcon still runs its original 250ci six-cylinder, with a later-model Falcon T5 BorgWarner manual gearbox. Bruce Everett from Echuca has owned his ’65 Impala for over 25 years now. “It’s an Aussie-built car,” he explained. “I’m only the second owner and I drive it to work every day. I’ve done a lot to it over the years – the motor’s now a worked 454 that’s had a bit of head work, a decent cam and extractors fitted. There’s a full-manual Powerglide behind it and the diff is a Chev 12-bolt.” 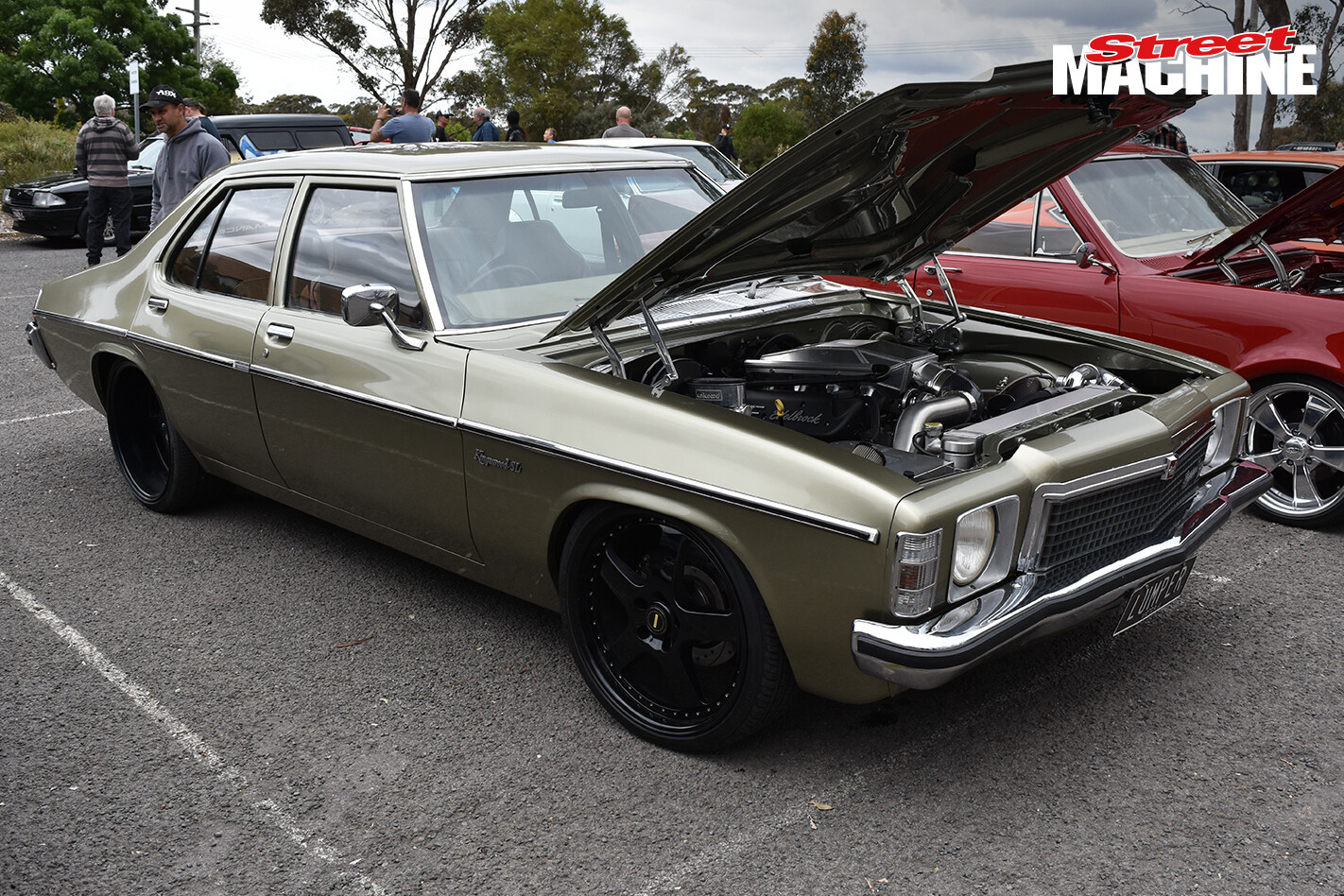 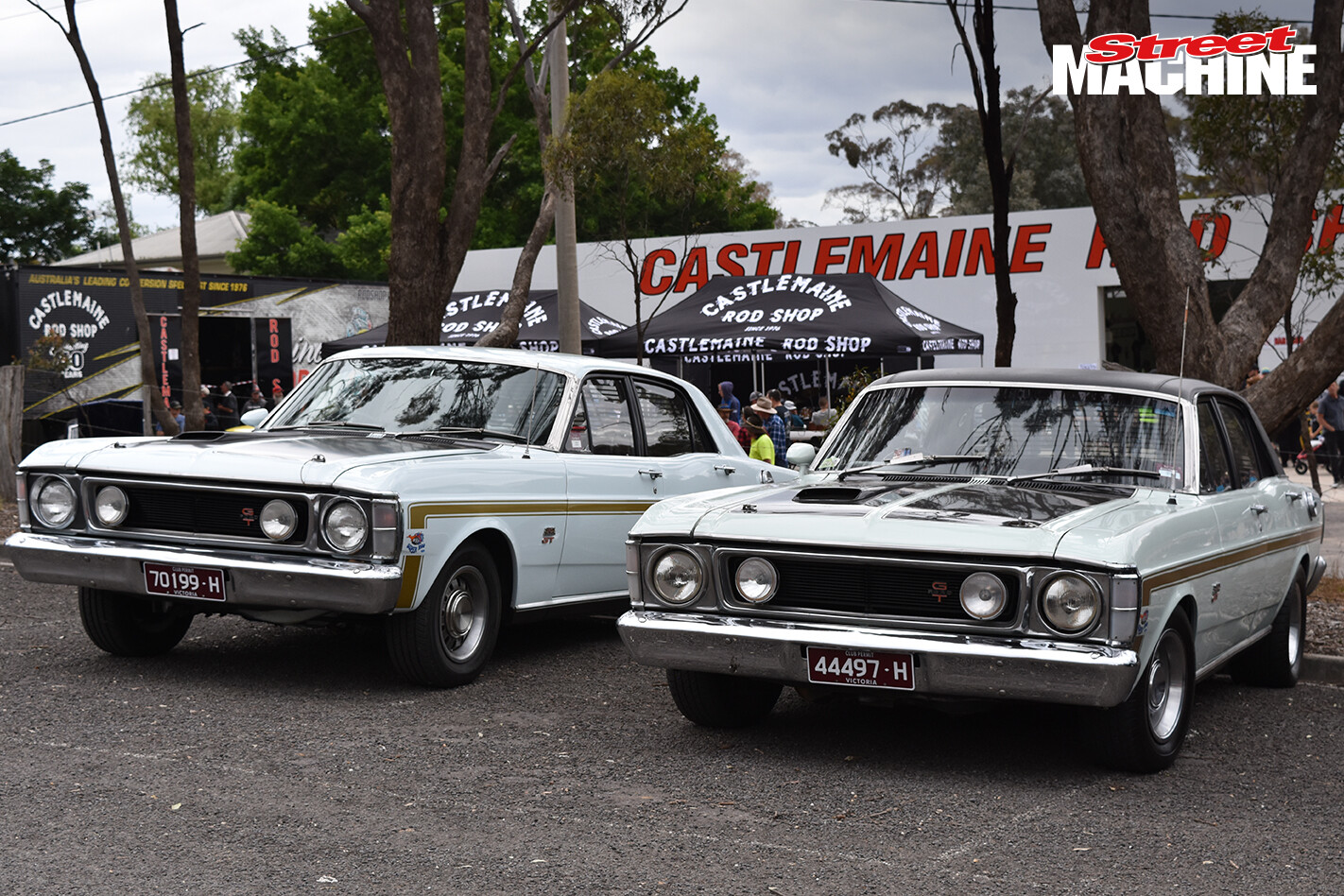 Looking like it had just been driven off the showroom floor, Brett Street’s genuine XW GT Falcon has only recently hit the road again after a 14-year top-to-bottom rebuild. 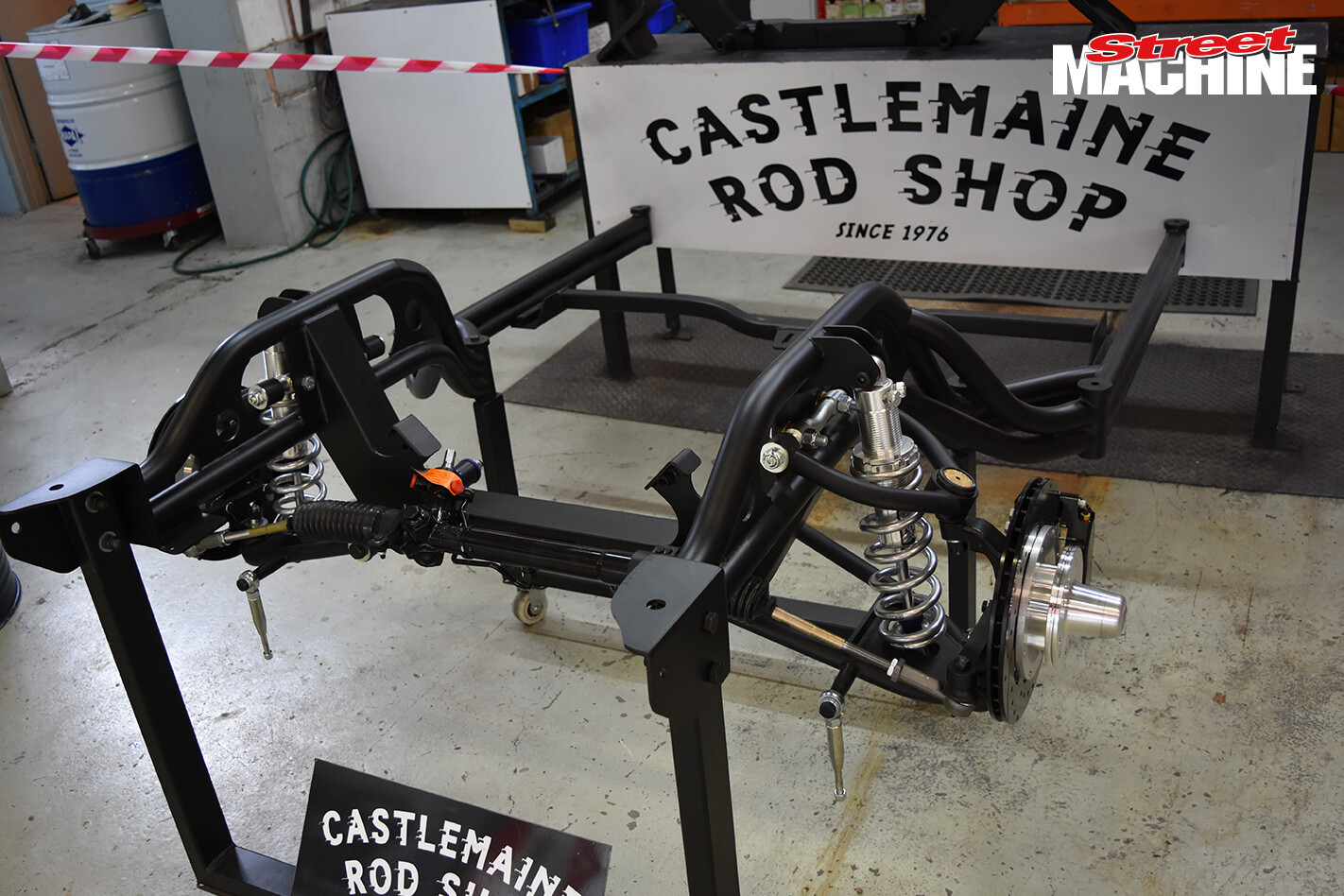 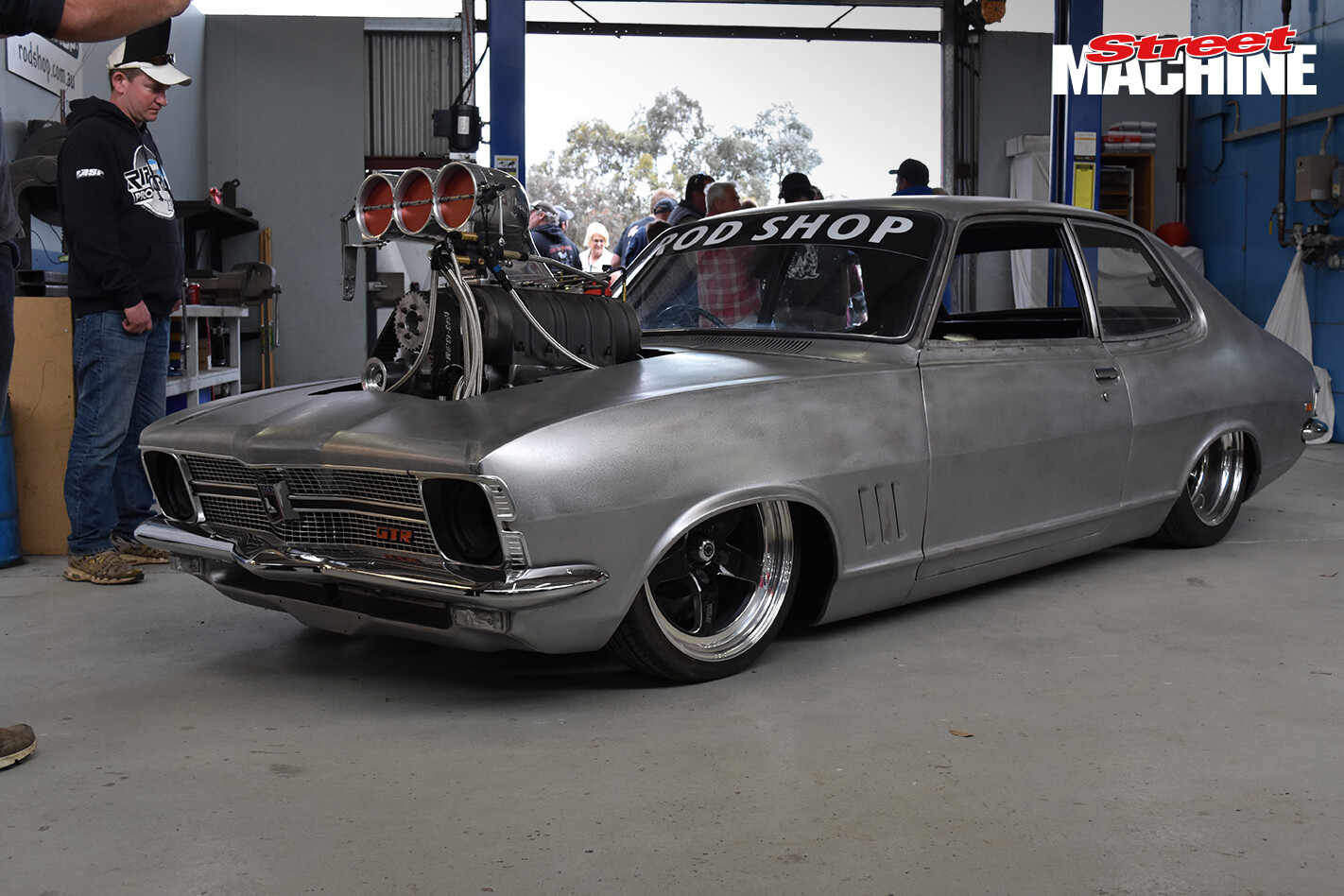 CRS’s LC GTR Torana project has had a major change of direction and is now headed for the burnout pad. The twin-supercharged LS has made way for a blown mechanically injected 540ci big-block Chev. 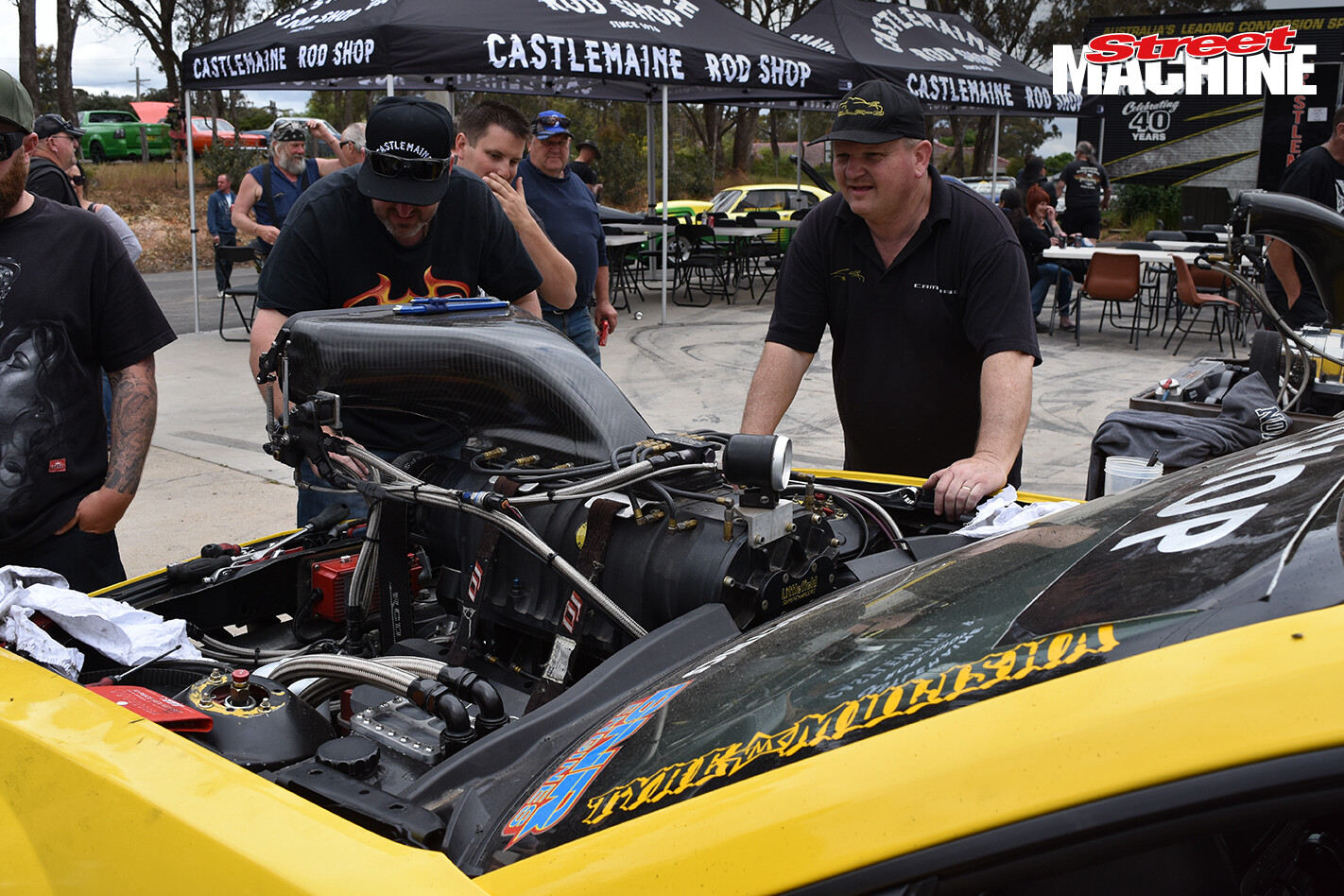 Steve Nogas and his engine builder and tuner Brett Niddrie were keen to put on a show for the crowd, so after the KILLA-B Camaro tore through a blower belt they got it changed quick-smart. Steve was all smiles after destroying a set of tyres in KILLA-B rather than another belt!