THE annual Chryslers On The Murray is the biggest Mopar show and expo in the southern hemisphere, and for the 26th running of the event, 855 entrants from all around Australia rocked up to Albury-Wodonga on the Victoria/NSW border. It was an action-packed weekend for Mopar fans, with a massive show ’n’ shine and swap meet held at Hovell Tree Reserve, go-to-whoa driving events out at Wodonga TAFE’s Logic Campus, the annual Ettamogah pub cruise, and street cruising around town going late into the night.

Every year at COTM, particular models are pre-selected to be the focus of the show. This year the spotlight shone on the AP5, AP6 and VC Chrysler Valiants, as well as the Javelin/AMX in a gathering put on by the AMC Rambler Club to celebrate 50 years of the Javelin’s release. It’s pretty rare to see 46 AMCs (20 of them Javelin/AMXs) all parked in the one spot in Australia.

Here are just a few of our highlights from this year’s Chryslers On The Murray. DAN Murphy’s 1968 AMC Javelin was awarded the Best Javelin trophy, presented by the AMC Rambler Club. Dan, now 40, has owned it since he was 19 years old.

“I brought it down to Chryslers On The Murray back in 2002,” he said. “Then I did the usual thing: got married, settled down and had kids, so I put it away in the shed for a while.” Not long after Dan got hold of it, he stripped it down and painted in Mint Julep green, a Holden Sandman colour, and rebuilt the whole car. “That was back in August ’98, so the paint’s 20 years old now,” he said.

“It was off the road for about 15 years, but life’s changed a lot since then, so I recently decided to get it on the road for my 40th birthday. I pulled it out of the corner of the shed and tidied it all back up. Then when I was in the midst of putting in a new motor and ’box, I realised they had this event coming up so pushed to get it finished and brought it down here from Newcastle to show it off.” 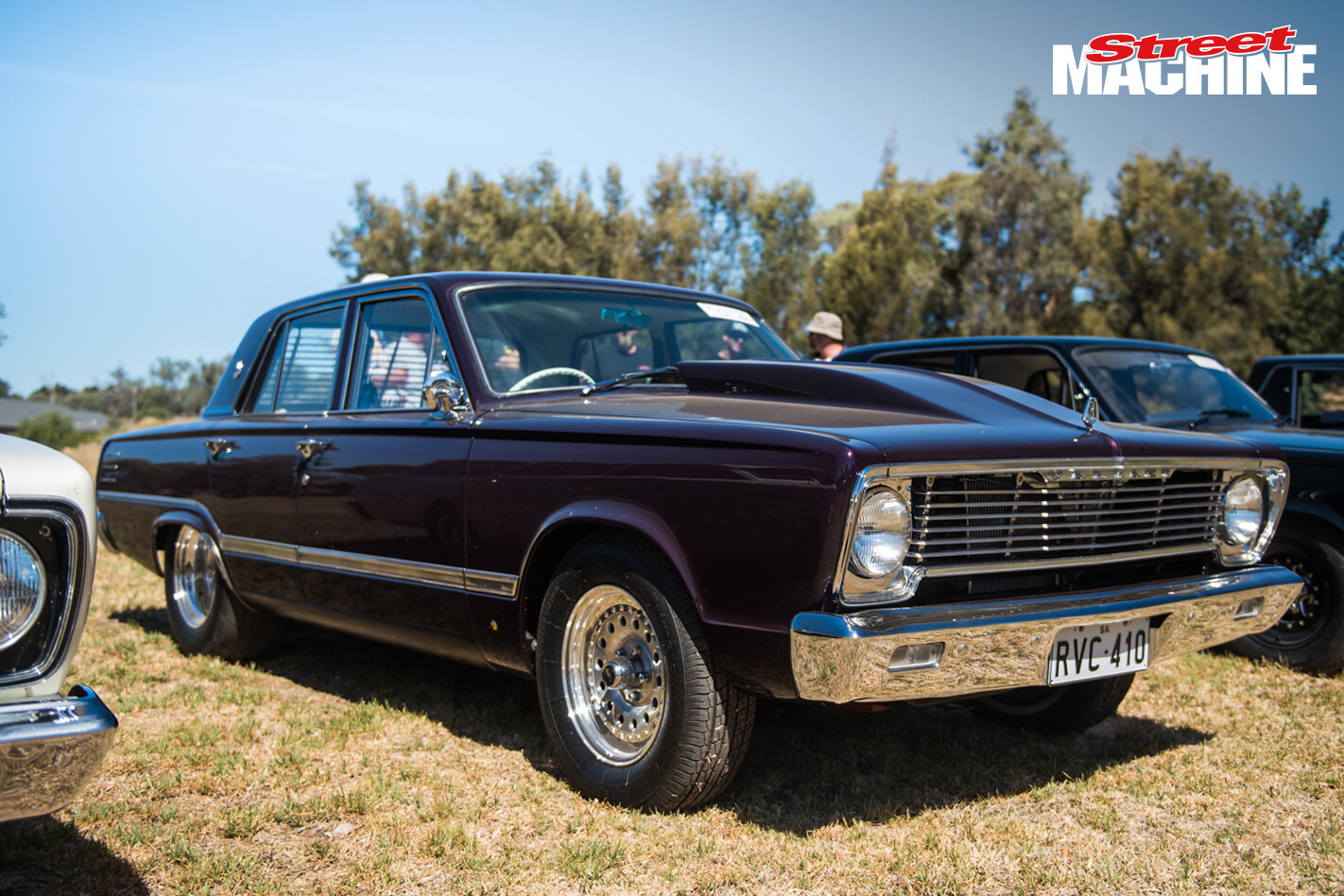 “It runs 10.7@126mph down the strip in full street trim,” Rob said. “We’ve had a ball [at COTM]; I’ve been cruising the streets here all weekend. Six of us brought our cars over on the truck from Adelaide. I thought I’d get it out this year because the VC is one of the spotlighted models.” ONE of the coolest-looking AP5s on display over the weekend was Damien Veness’s Safari wagon. Powered by a slant-six, but with some modern upgrades like boosted disc brakes and air conditioning, this is one clean, pristine longroof cruiser. 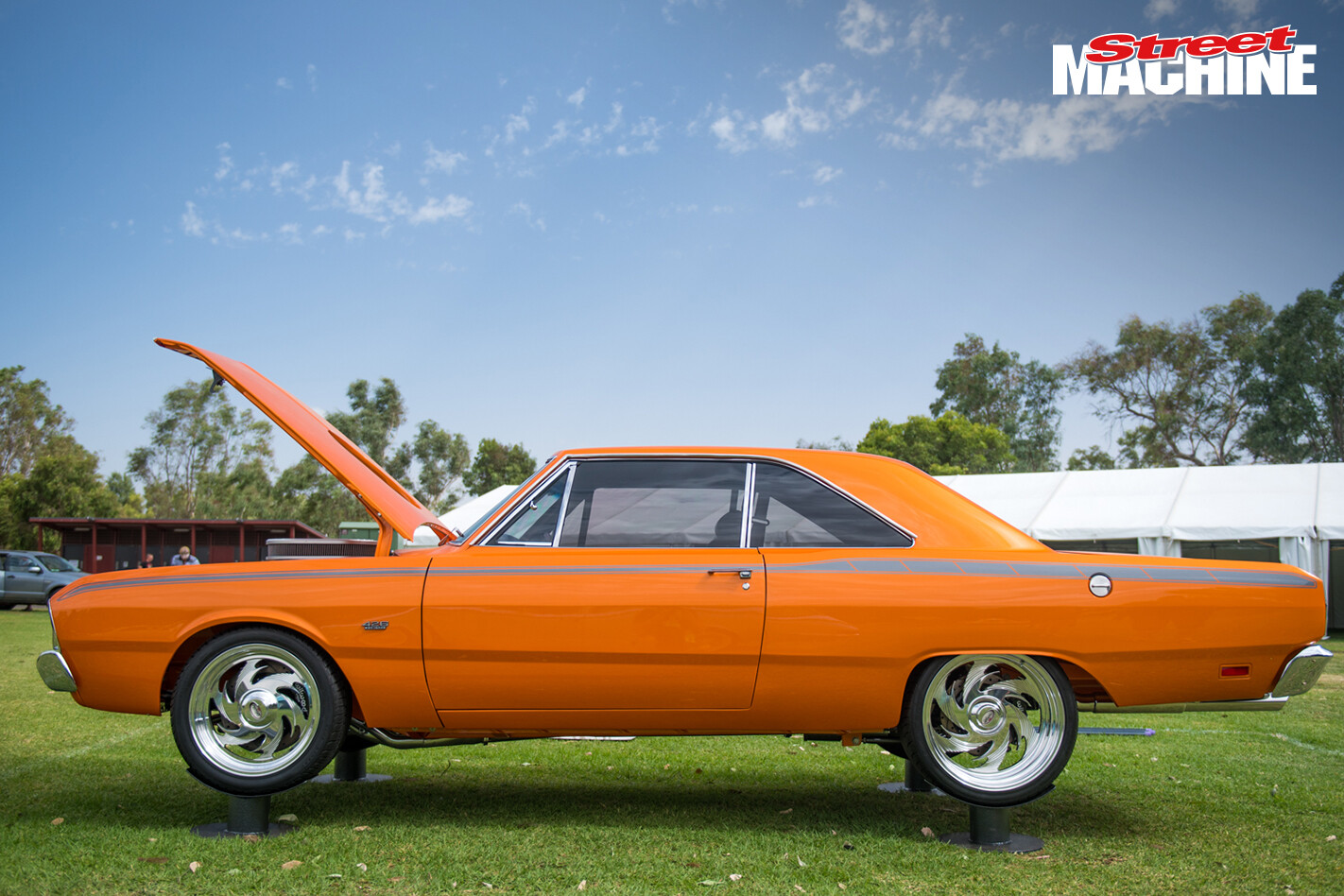 KEVIN Couper and sons Steve and Paul made the long trek down from Townsville to debut Kevin’s 426ci all-alloy Hemi-powered VG hardtop. Good move, guys – it took out Chrysler Of The Show! “I LIKE to think of my Charger as a neat driver, not a show car; we just jump in it and go,” said Paul Vezinias of his striking gold VJ Charger (SM, Apr ’15).

“We drove it here this weekend from Wollongong, and a couple of years ago we hopped in it, drove it to Summernats and even made the Top 60 hall.” Paul’s car was in storage for almost a decade before he pulled it out for a three-year rotisserie rebuild. “I like the seamless look, so I’ve had it de-seamed; it’s subtle and a bit different,” he said. “It’s the same as with the colour-coded bumpers – not everyone likes it, but it’s just something that I wanted.

“The motor is a Chrysler 360, stroked out to 408ci, with ICE ignition, Edelbrock manifold, ported cast-iron heads and a 750 Holley. It puts out just under 500hp. That’s sufficient for a street car.” THE swap meet is still an integral part of Chryslers On The Murray and can be a great place to pick up that rare component – or even a project car. When it came to the latter, this year’s pick of the bunch was an original low-mileage (60,000km on the clock), rust-free Centura; $6K and it was yours.