Some people think hot rods should be kept out of the rain and the mud. These guys beg to differ

IT’S no secret that the area around Castlemaine, Victoria, is one of the cradles of Australian hot rodding. Some of the earliest rods in Australia were built in these parts and it later became a centre of hot rod publishing and specialist parts manufacturing. 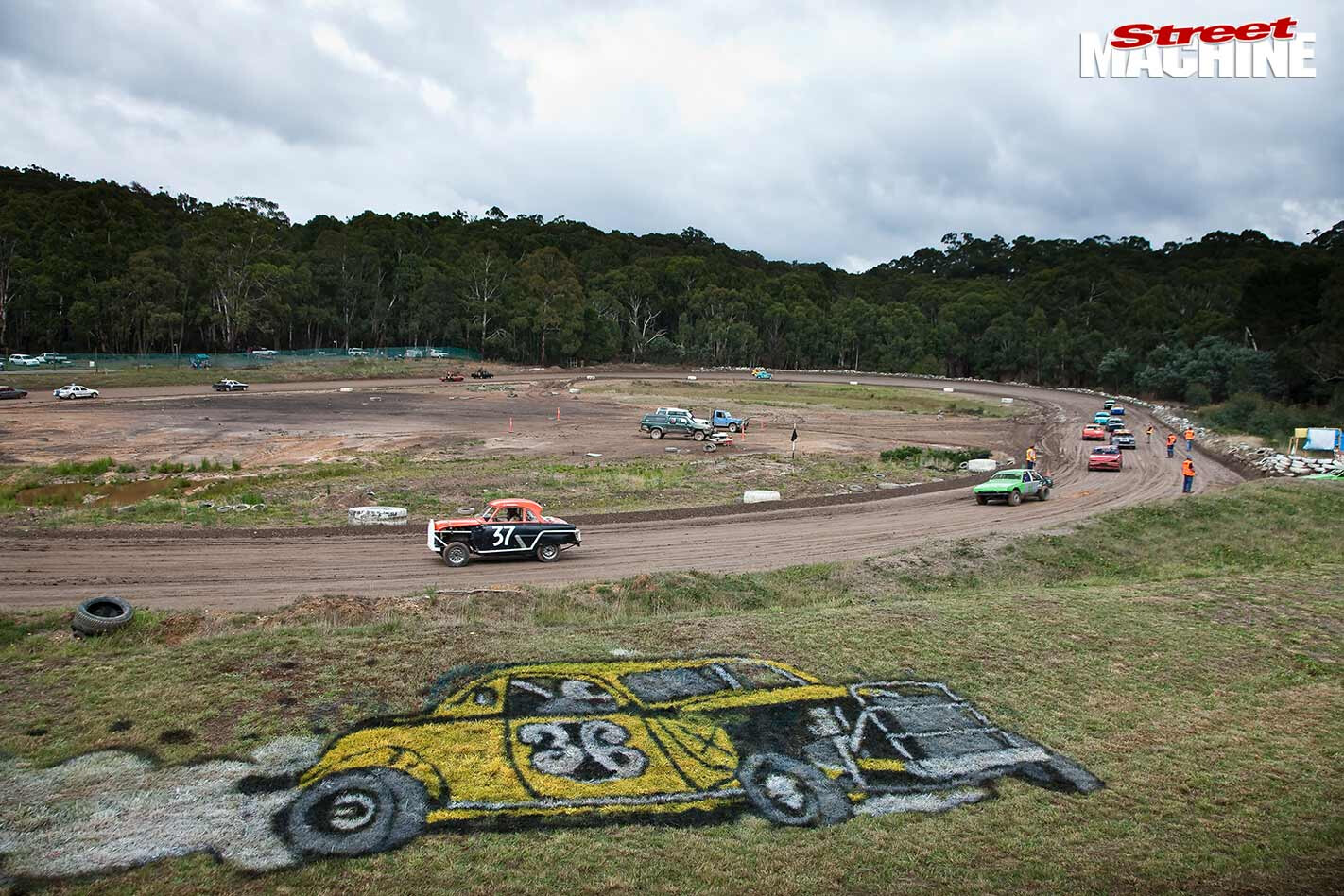 It was also home to high-octane racing, from the long-defunct, single-lane Newstead drag strip to the Maldon Hillclimb and the Daylesford Speedway, where the picturesque surrounds are still disturbed by the sounds of mechanical mayhem. If you want to get in touch with the history of our sport, this is the place to do it.

Daylesford is an hour up the Western Highway out of Melbourne. It’s a pretty, tourist-trap kind of place and to find the speedway, you’ll need to turn down a dirt road beside the footy ground. You’ll be sure you are on the wrong road, then there’s a sharp left-hand hairpin bend heading down a hill. You consider turning back when a flathead Ford V8 with open exhaust fires up in the valley through the trees and you know you are close. 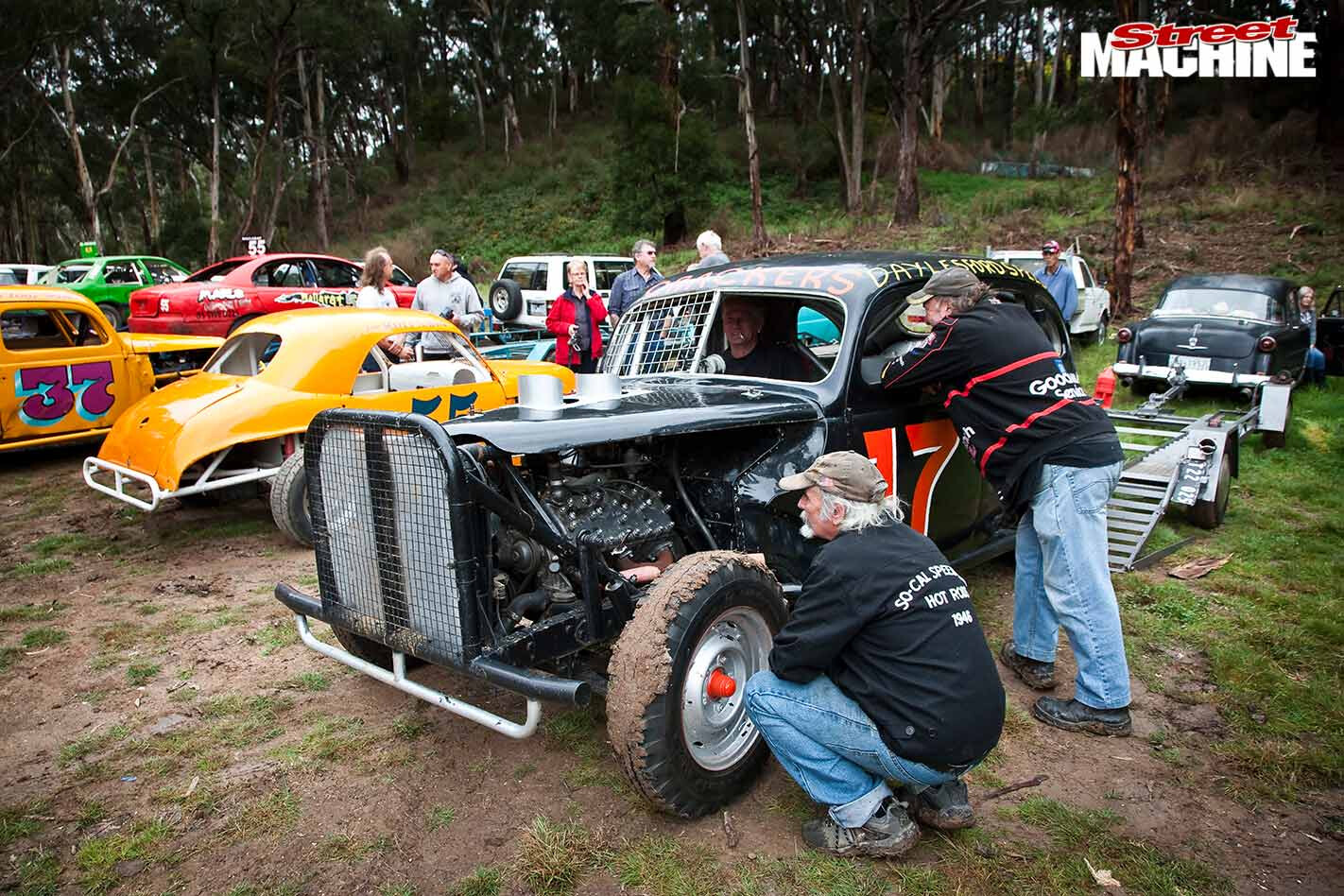 Down the slippery single-lane road and the view of a valley opens up to reveal a time warp speedway track, its pits packed with old jalopy race cars. It’s classic 1960s in sepia tone.

The car park is packed with early Holdens and Fords and the original racetrack signs are still intact, although faded and mud splattered. Someone’s mum collects a few dollars for entry and you head for the pits fence for a look at all the colours and sounds from times long past. 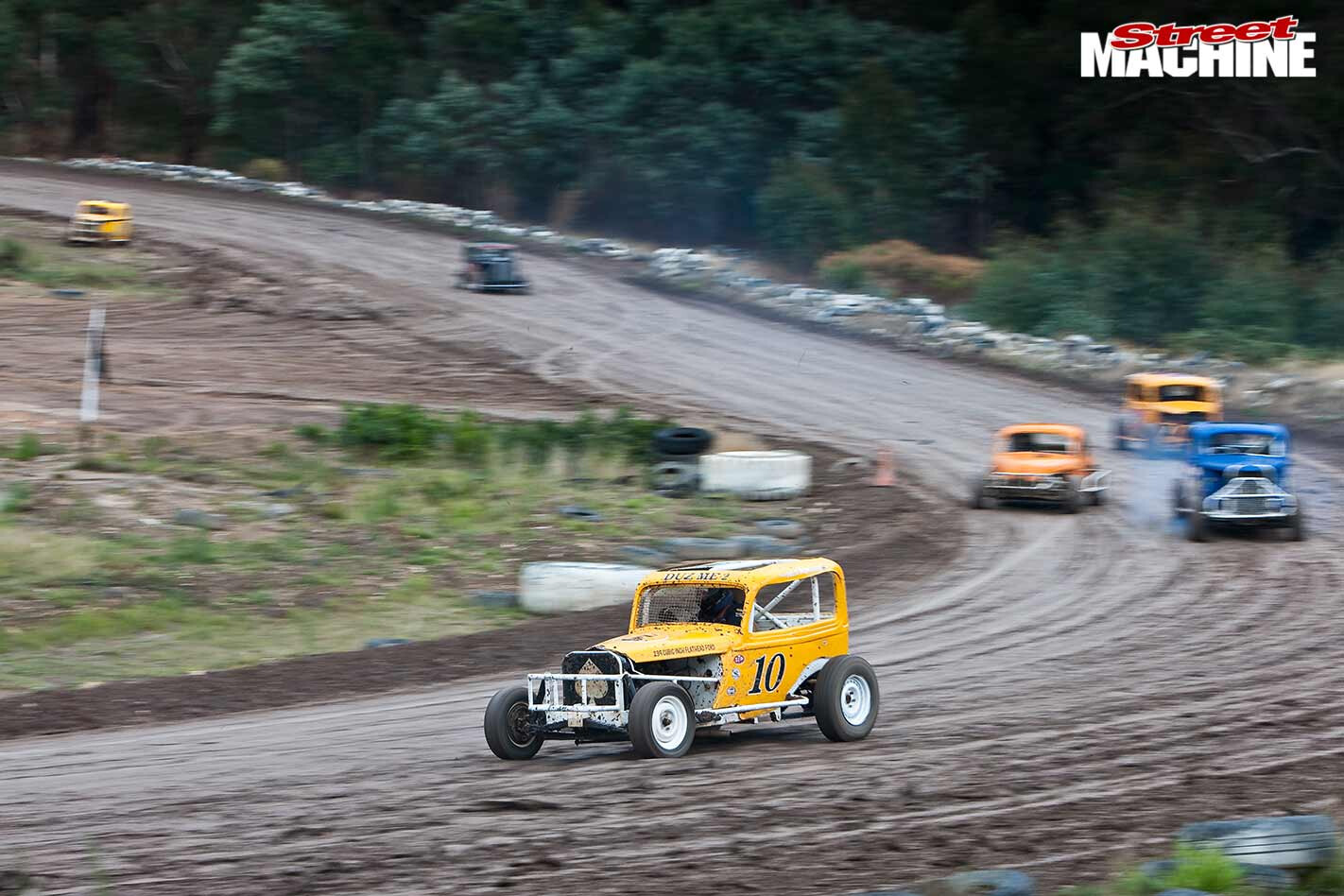 A dozen or so old hot rods line up along a fence facing the centre of the pits and across to the runway that leads the race cars onto the dirt oval that’s seen a million laps, slides and stacks.

“There are a lot of ghosts out there, some good fellas have died here,” silver-haired hot rod racer Roger Morrow tells us.

Roger is a Daylesford Speedway veteran and was keen to share his memories of Daylesford’s glory days from the 1960s when he raced ‘heavy’ stock cars based on ’34 Ford bodies. These evolved into skinnier Ford-based bodies, which turned into sprint cars as we now know them. 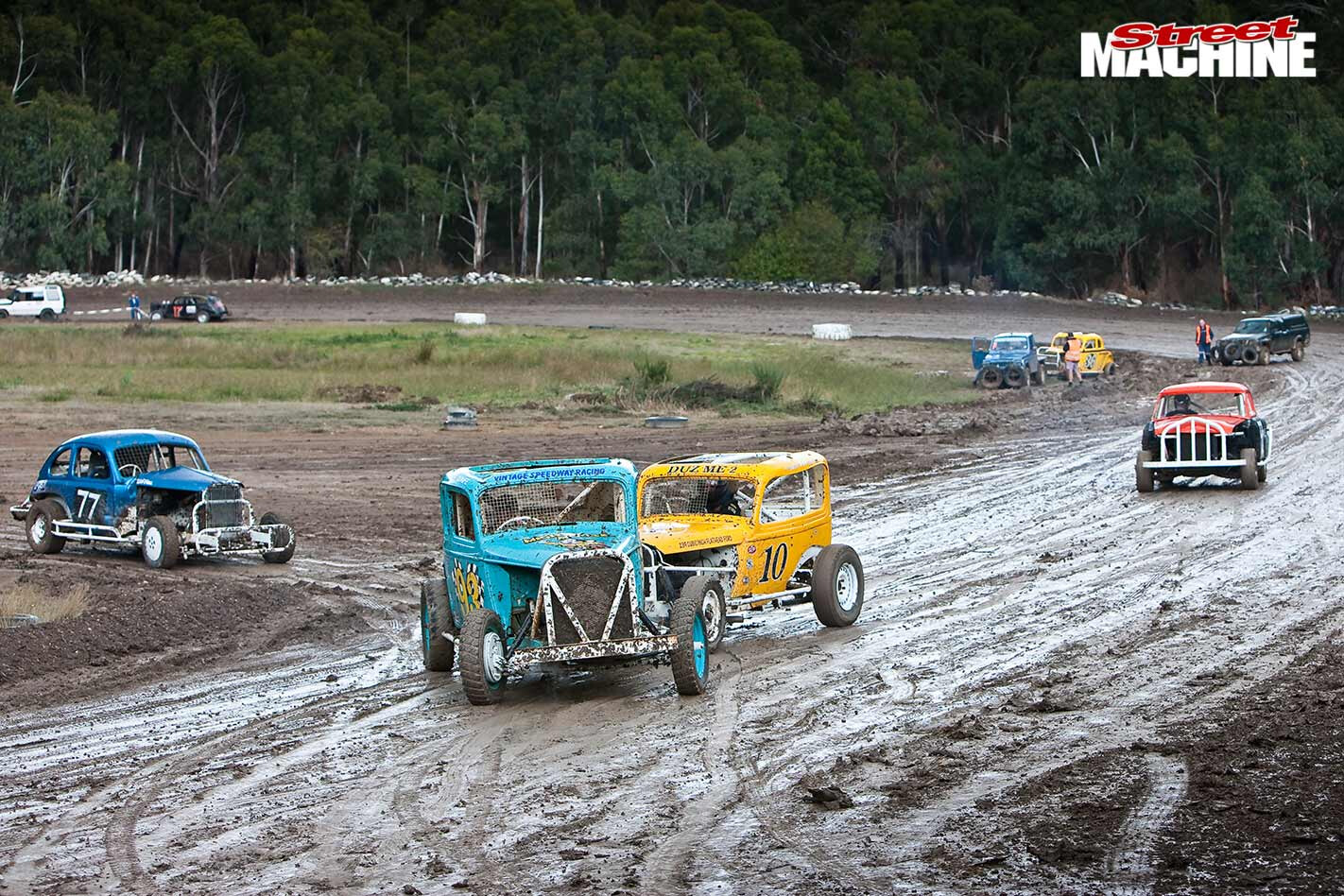 “I eventually moved out of the area and got into rallying,” he says.

“Rallying is great, there’s lots of sliding and getting crossed-up, but I had to learn to turn left,” he laughs.

“Then someone told me about Steve Dann’s workshop, where every Friday a bunch of fellas turn up and fix up old speedway hot rods. So I hunted down the address in Kilsyth and just turned up. Walked in the workshop and I was in heaven.” 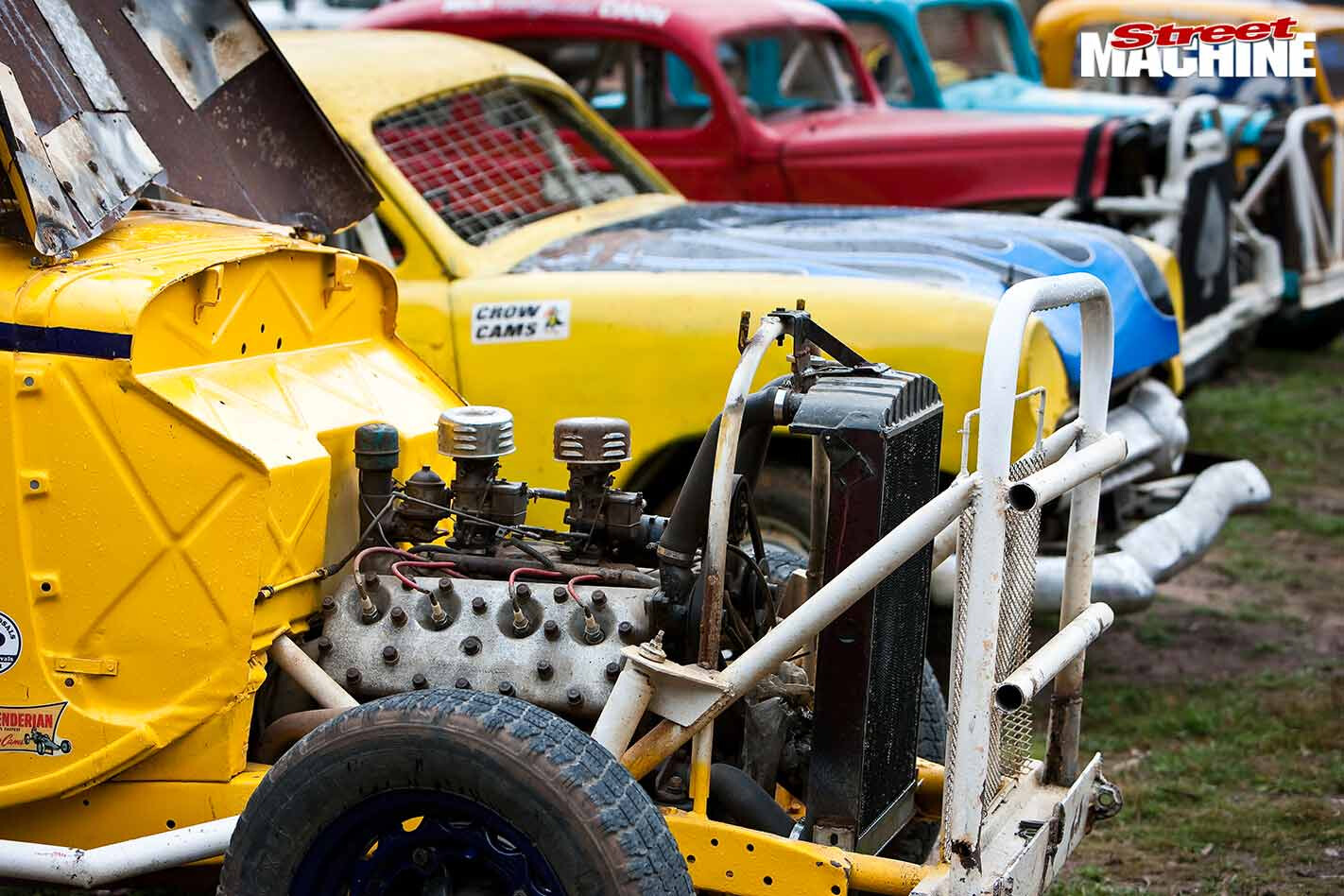 Steve Dann himself is getting suited up to race, alongside his son Mick. The pair run a parts recycling business in Kilsyth, incorporating a car removal business called Bomb Disposals. Mick has raced speedway since his teens, usually in later-model Commodores.

“We’d been up here for a meeting when Mick was a young teenager and got word of this old coupe rotting away on a nearby farm,” Steve says. “We hunted it down and Mick just wouldn’t leave till the fella sold it to us. That’s the coupe that he’s racing today.” 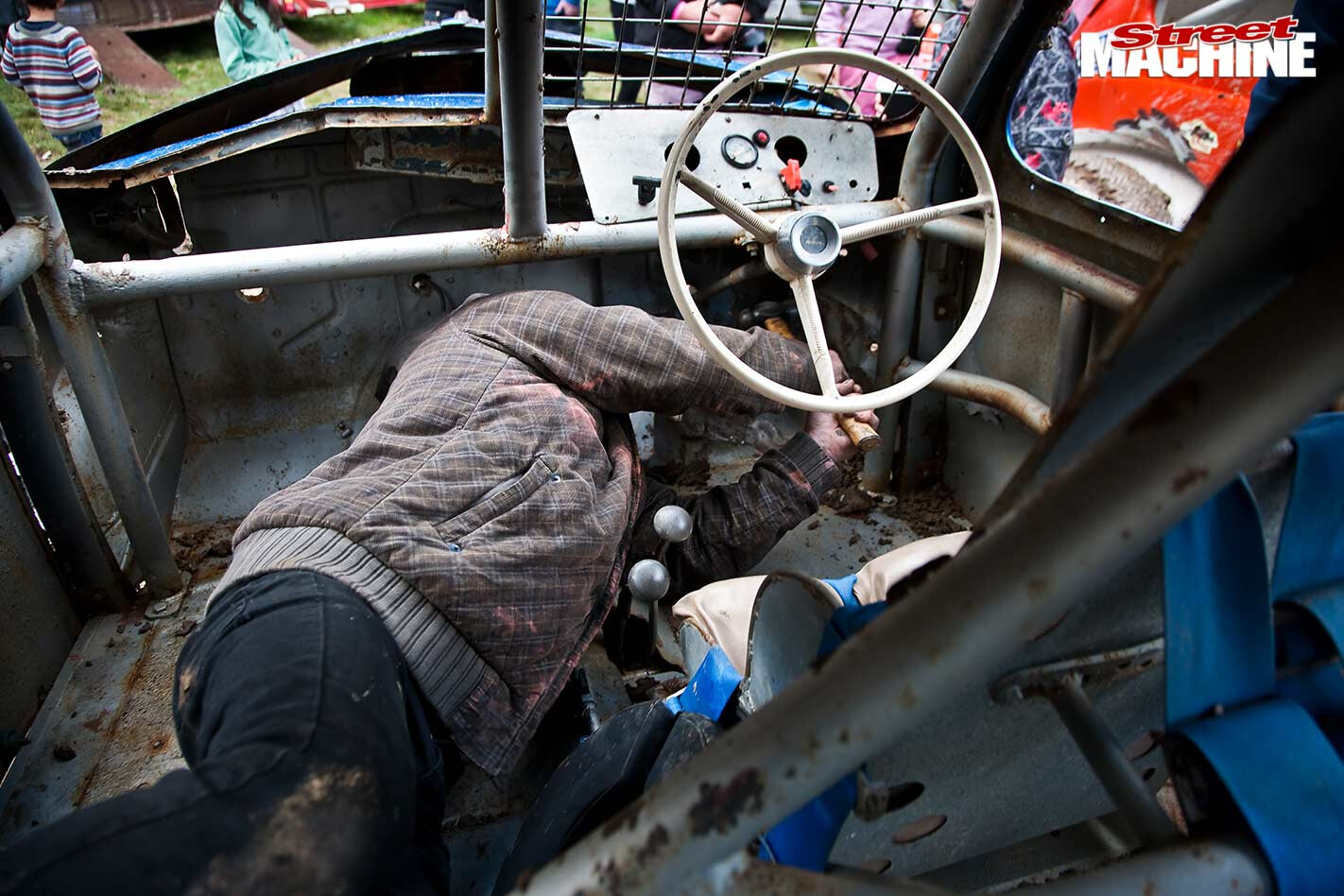 While there are groups around Australia resurrecting these old hot rods, the mob at Daylesford mainly consists of members from the Spades Rod and Custom club who call themselves the Aces of Spades. Most also own hot rods or custom cars and this is their racing interest they enjoy at least each month at a track somewhere in Victoria.

In the past decade these speedway hot rods were restricted to occasional demonstrations at tracks such as Murray Bridge, but now there are enough to fill a grid. The tracks are glad to have them perform a few spirited demonstrations at each meeting as well because the crowds appear to love the character of the class as they smoke and slide their way around the track. 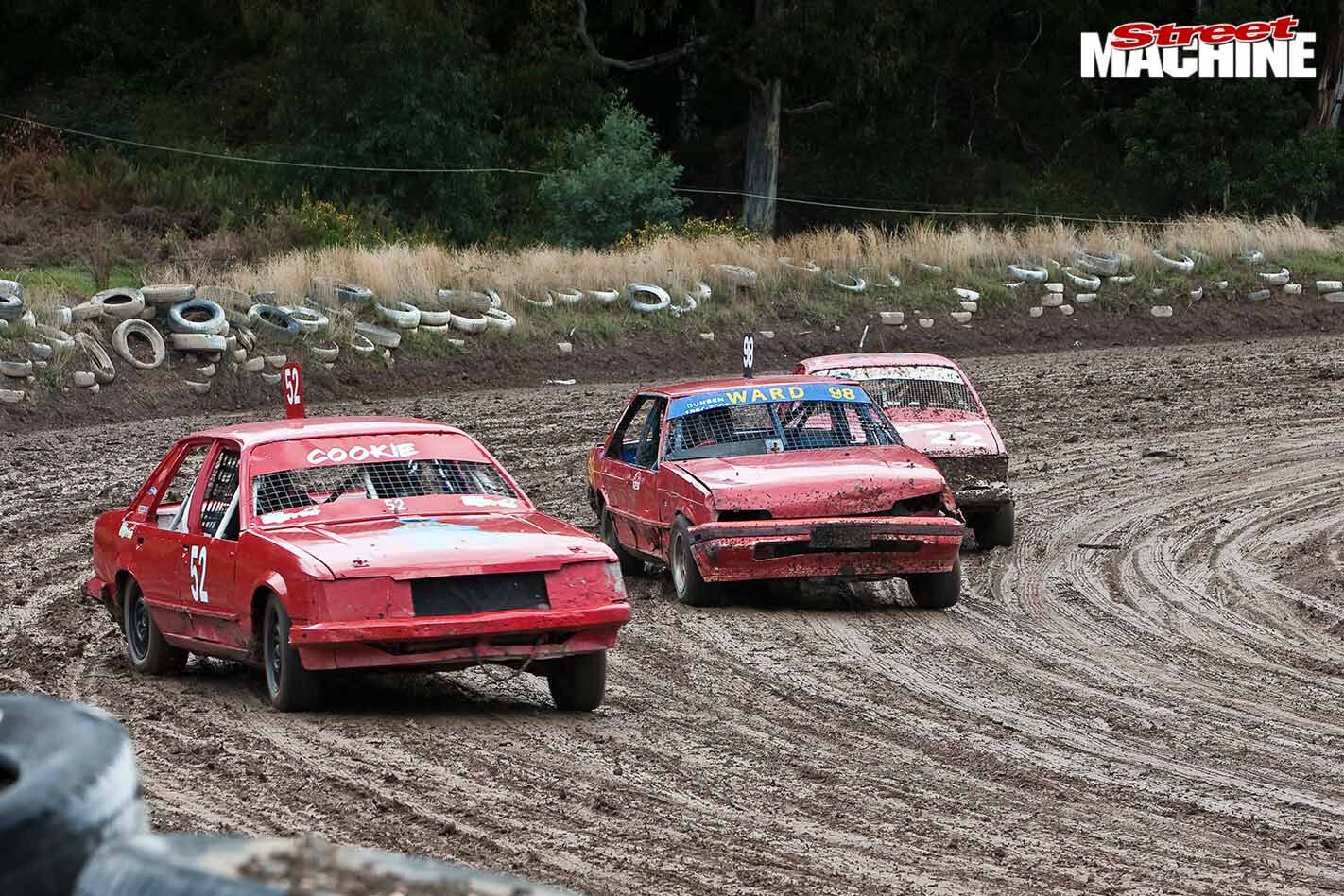 Most are based on early Fords of the 1930s, but you’ll see the occasional Chev, Mopar and even the odd FJ Holden.

Number 33 is the pale blue 1932 Chevy driven by the only female competitor in the group. It’s powered by a 245ci stove-bolt six and Jenny is part of a family of hot rodders and vintage speedway racers. Her partner Vic O’Neill races ‘El Toro’ — the red 1940 Ford — while their son Callum races the blue number 77 car, ‘Hell Raiser’. Further along in the pits is Vic’s brother Billy with his number 66 ‘Pit Bull’ 1936 Ford coupe. 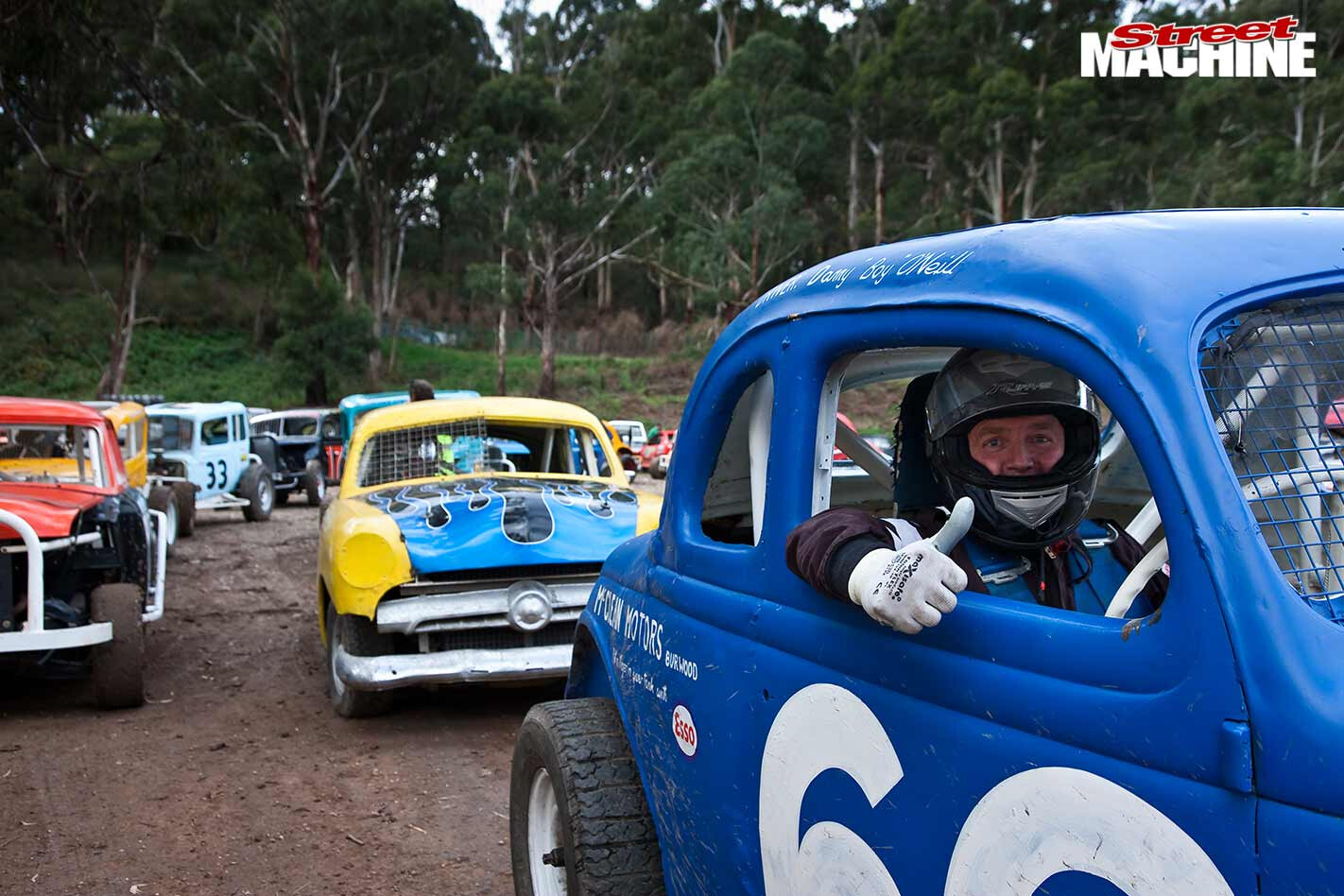 Typically, engines are similar to what came with the new vehicle. Most of the Fords run side-valve V8s, but the yellow number 59 ’49 Spinner has a Y-block. Frankie Robinson is the driver but the car is one of the Dann’s fleet of race cars that they share with club members.

These hot rods fill the pits with colour and fun, and everyone helps each other. One of the flatheads was running rough so between demos a group clustered around and cleaned the antique points. Callum’s ’46 Ford was then crunched on the back straight by a crossed-up coupe and everyone pitched in for body repairs, scrounging the pit area for anything that would stretch a damaged body panel away from a pedal assembly. Anyone who wasn’t hands-on was there for moral support or attempts at humour. 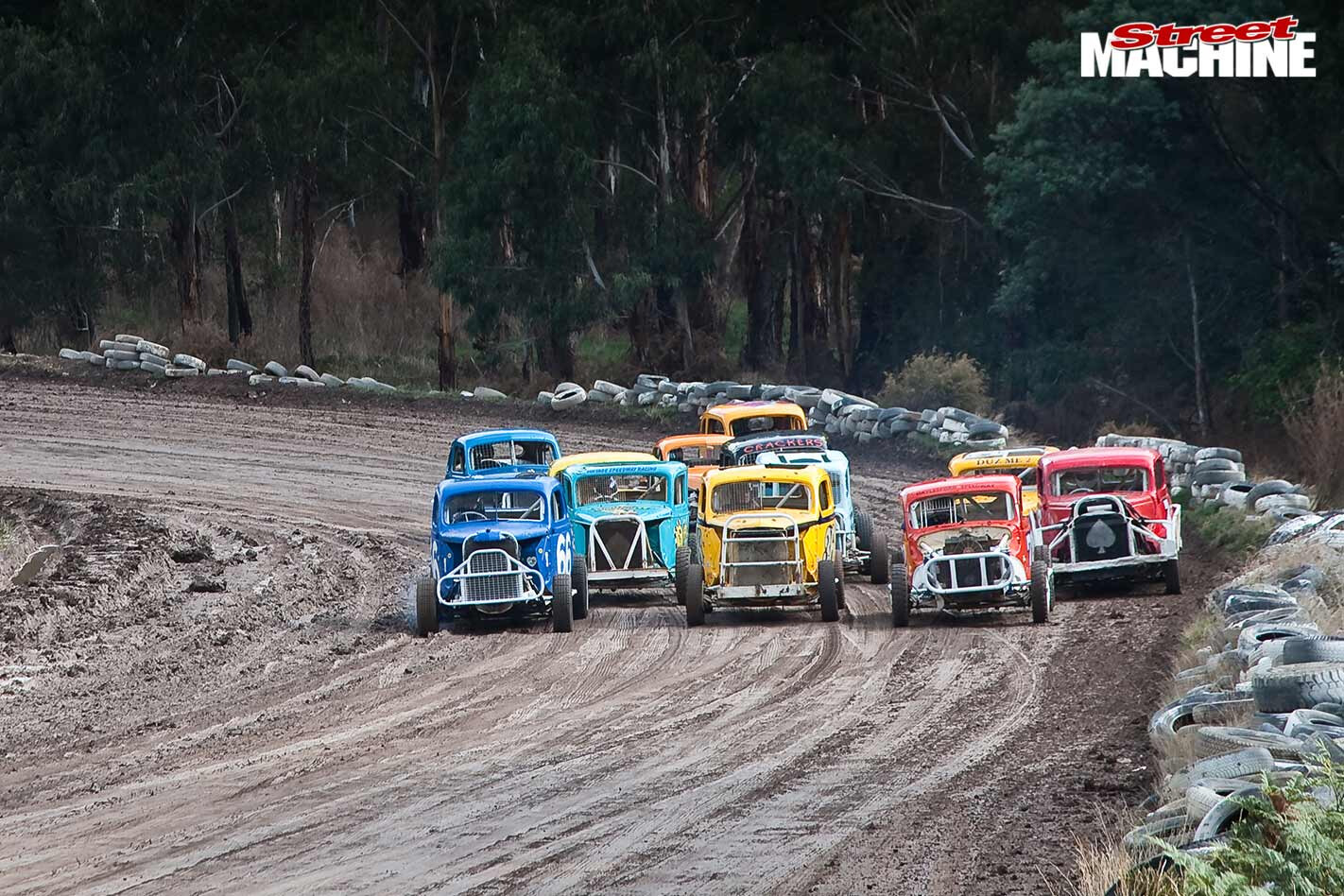 You won’t find any billet parts in these pit areas, instead maybe an old plow disc welded to a rim, or a hook made of metal rod welded to a dash board. This is so the driver can slot the long ’39 shifter into it to stop the box from jumping out of second gear.

You can’t keep the grins off the drivers and the spectators, even as they slip and slide up the muddy road that leads them away from a day of nostalgic racing that only turns right. 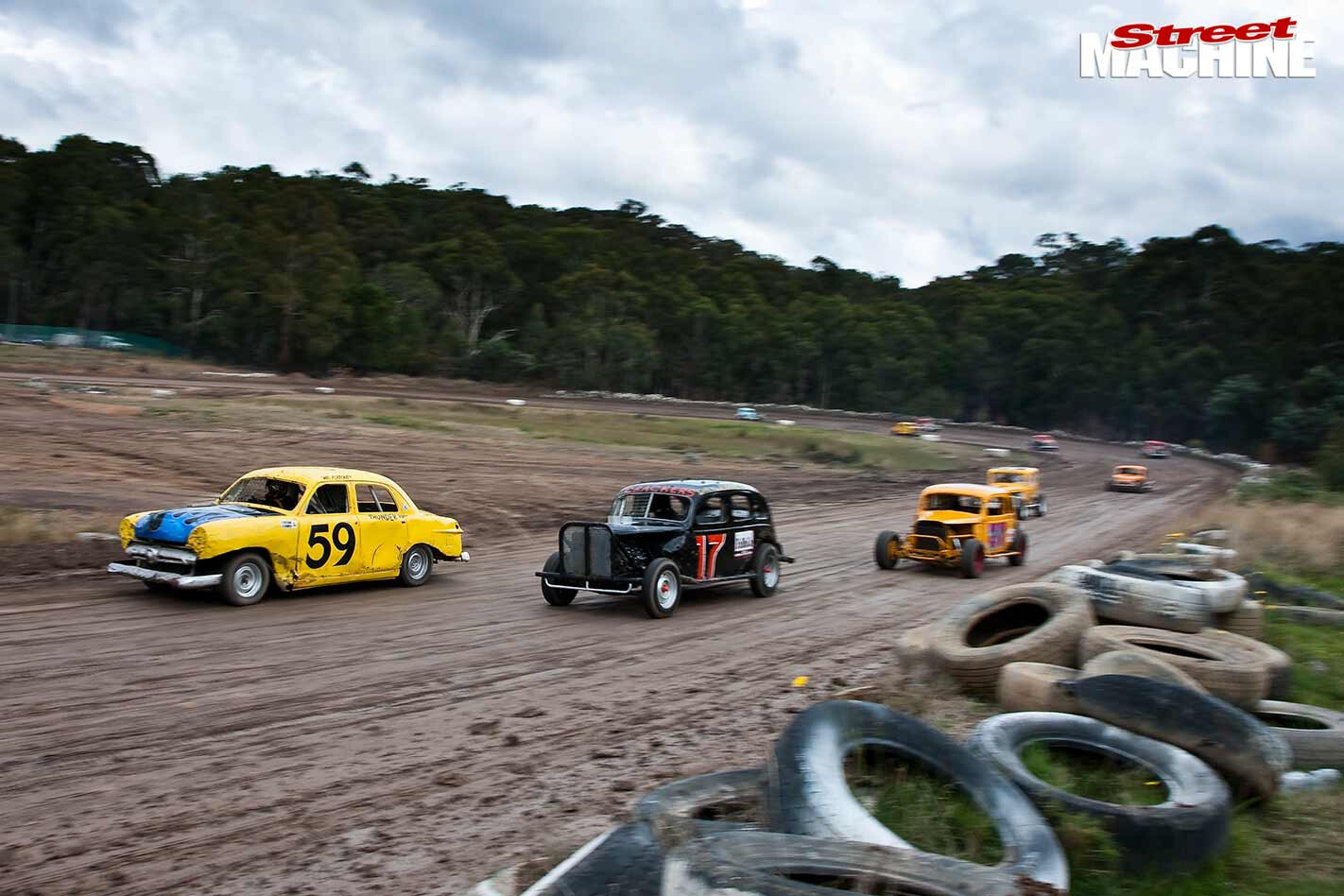 1. Frankie ‘Flatout’ Robinson pilots Mick Dann’s ’49 single spinner Ford with Y-block Ford V8 power. It came from its original owner in Beechworth, northern Victoria and was retired from active competition in 1973 when it was replaced by a Valiant Charger 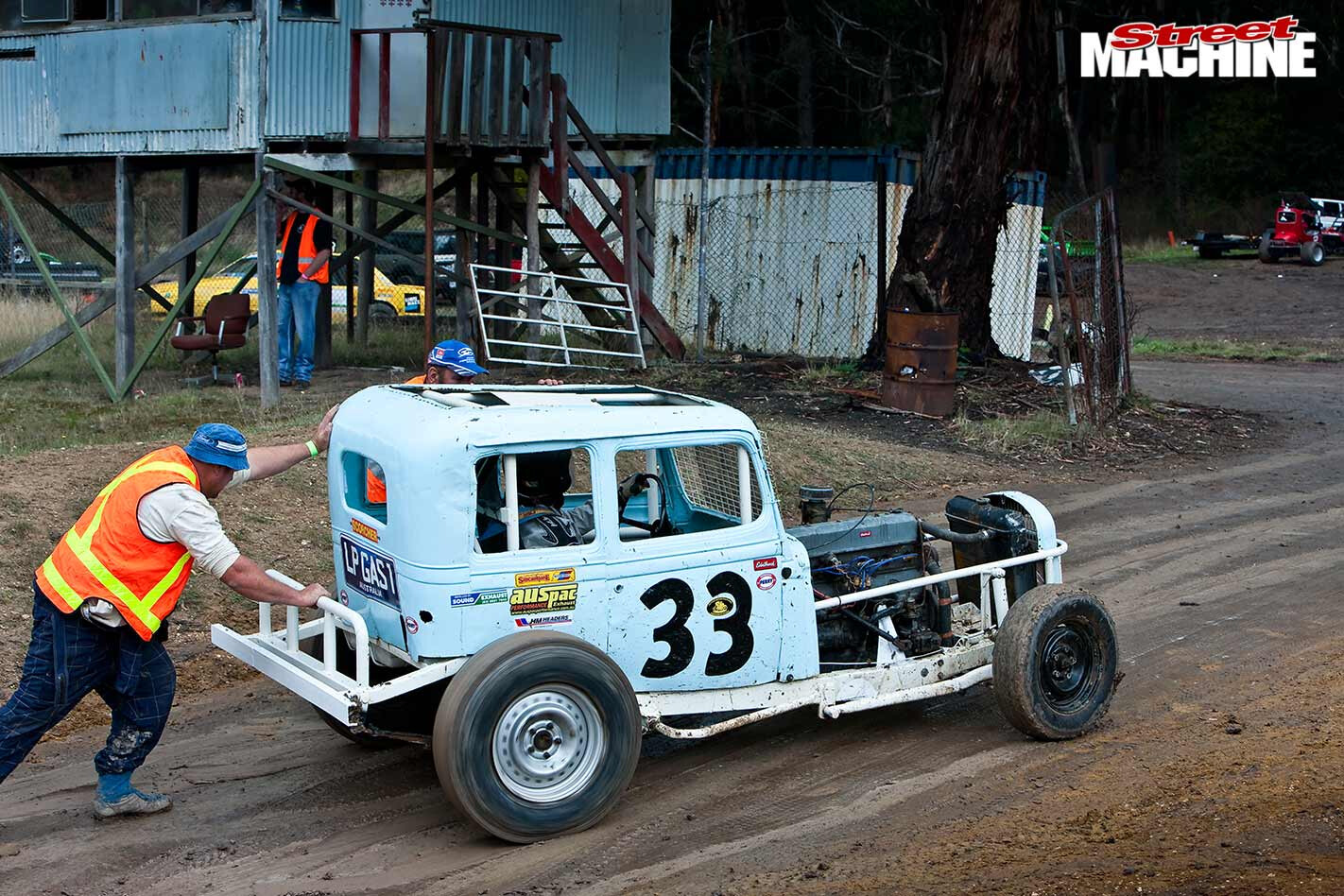 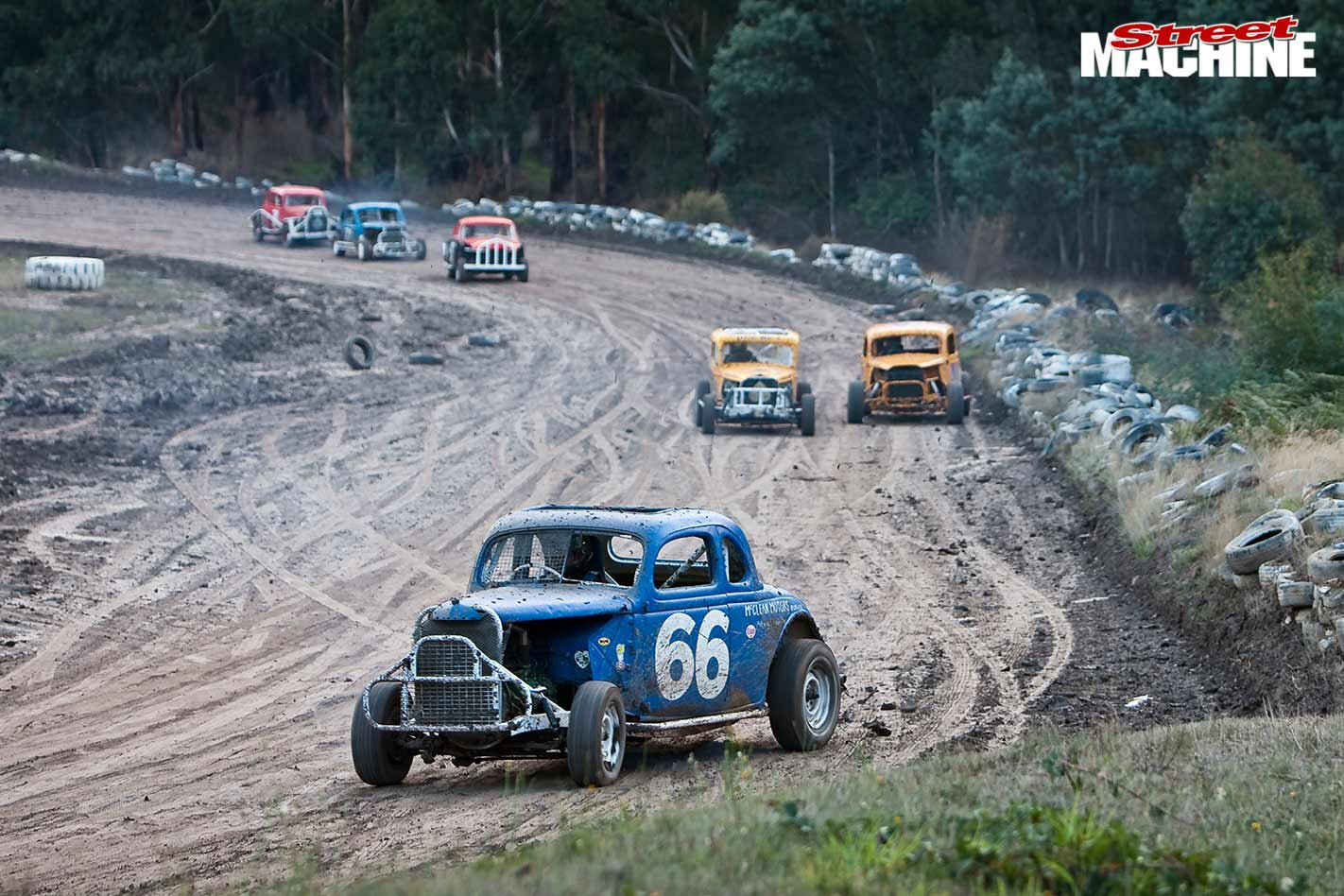 3. The remains of this 1936 Ford coupe came from Toowoomba, Qld. It had been raced by Rod Farr as #64 in the Brisbane area during the early 60s. Billy O’Neill sets up for turn one in slide mode 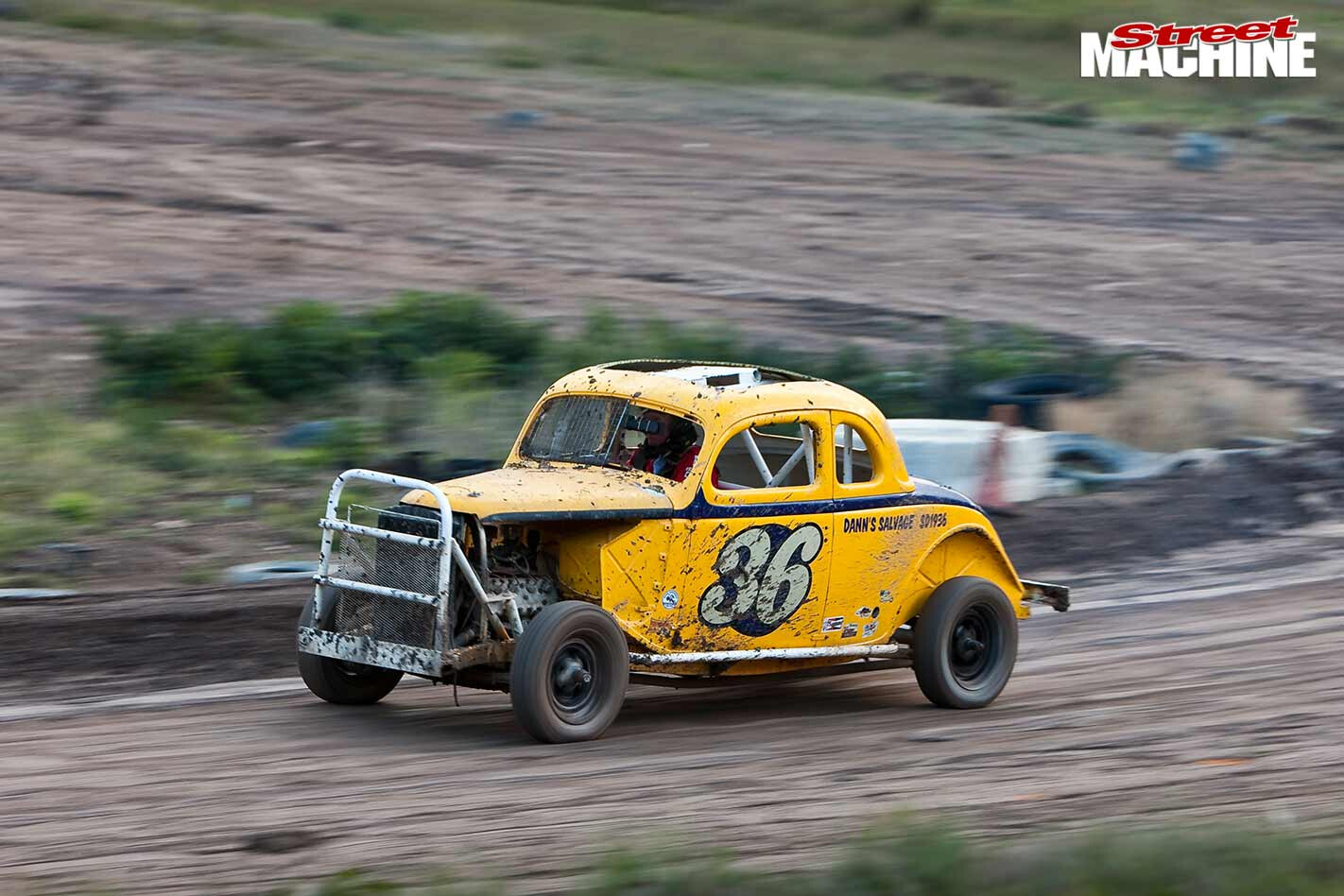 4. Simon ‘Chippy’ Wilshire’s ’36 Ford coupe is another of Steve and Mick Dann’s fleet of vintage hot rods. The remains were found on a farm near Kerang and was originally raced by Jack Adams at Koondrook in the 60s and 70s 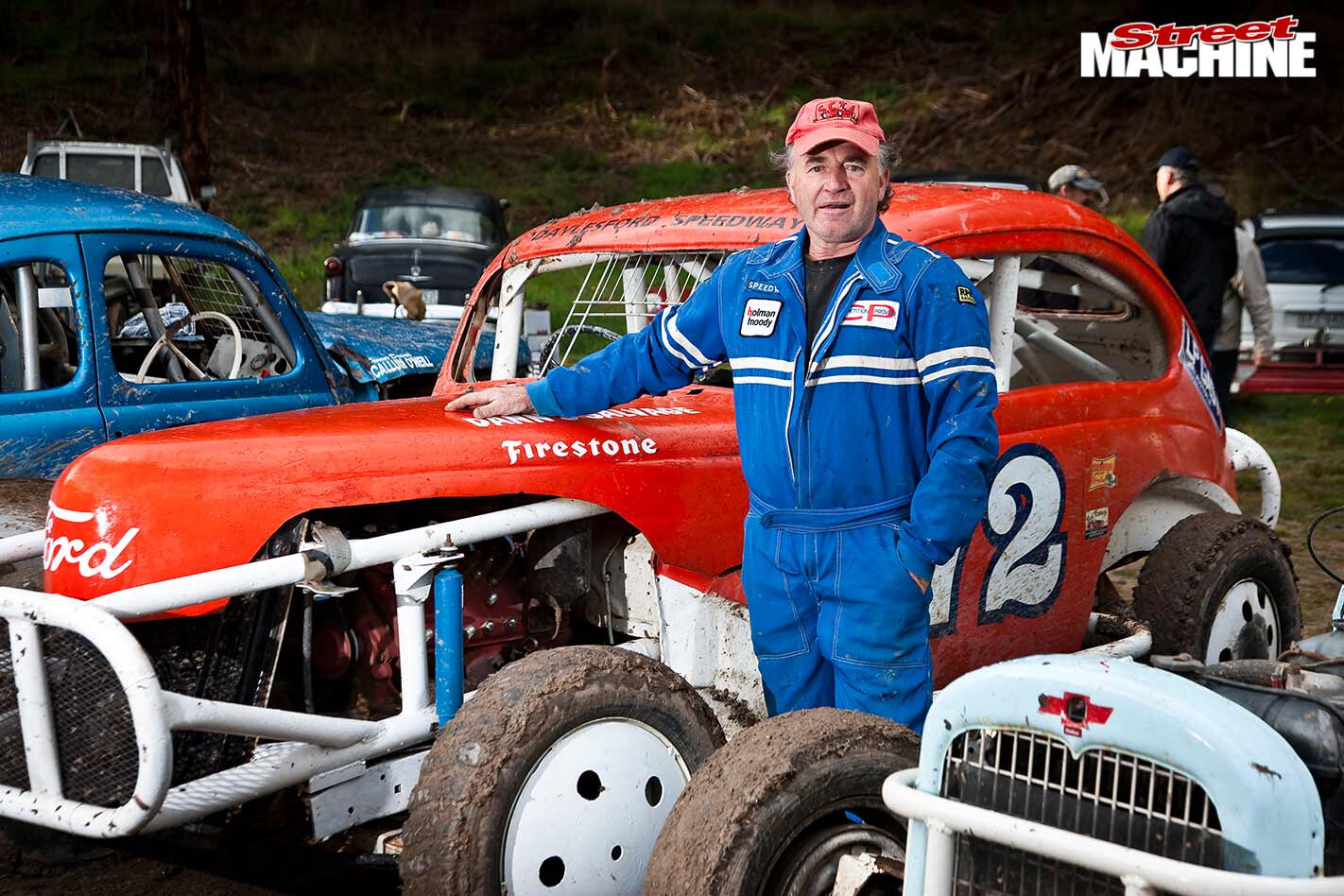 5. Vic O’Neill’s ‘El Toro’ ’40 Ford has a long history of racing at the Daylesford track back to the mid-60s. Originally it was a 1940 Ford sloper two-door before it was fitted with a shortened ’40 sedan body in its later racing life 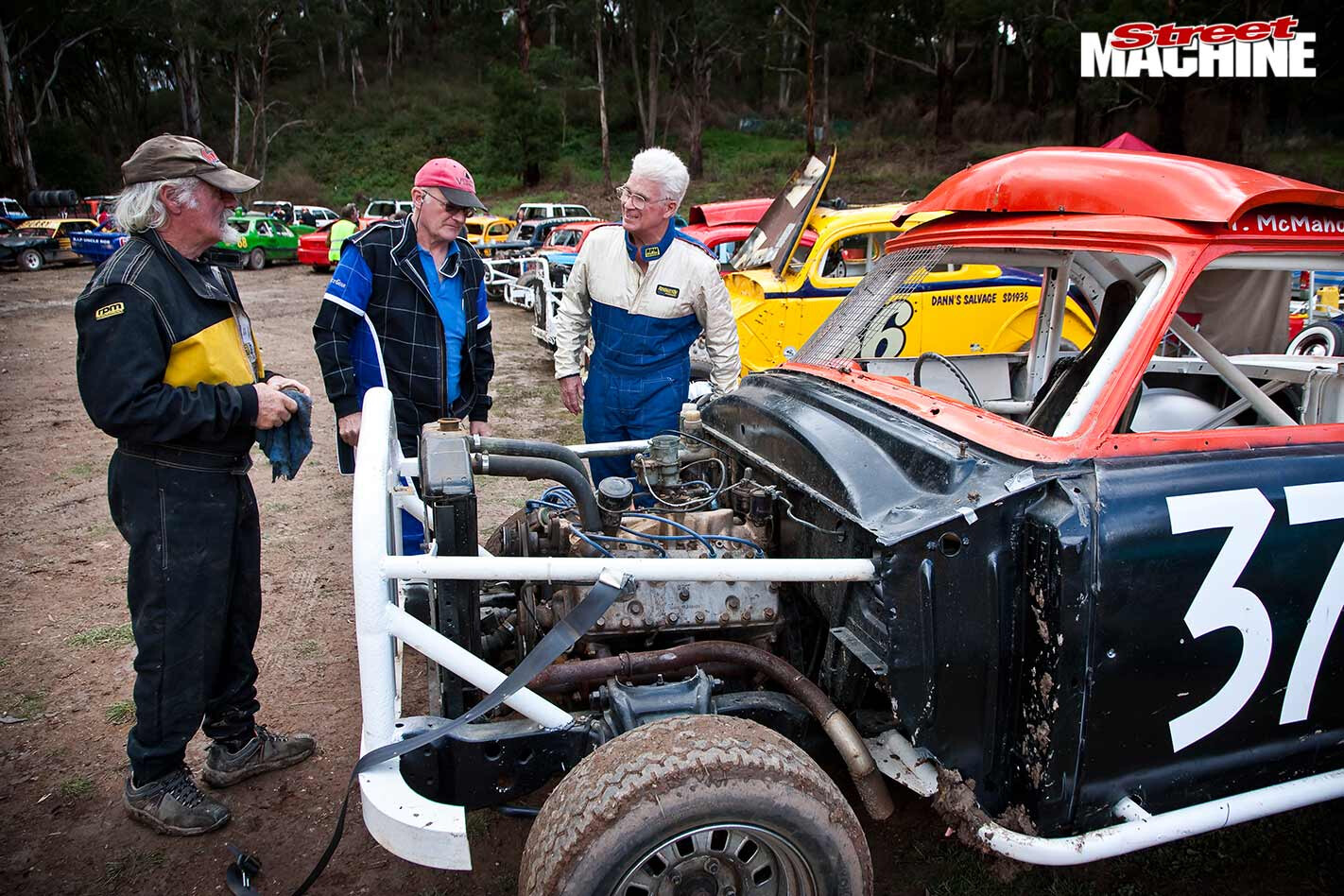 6. Mick Dann’s shortened ’52 Ford is a clone of a car originally raced by Terry McMahon. Powerplant is a 239ci flatty 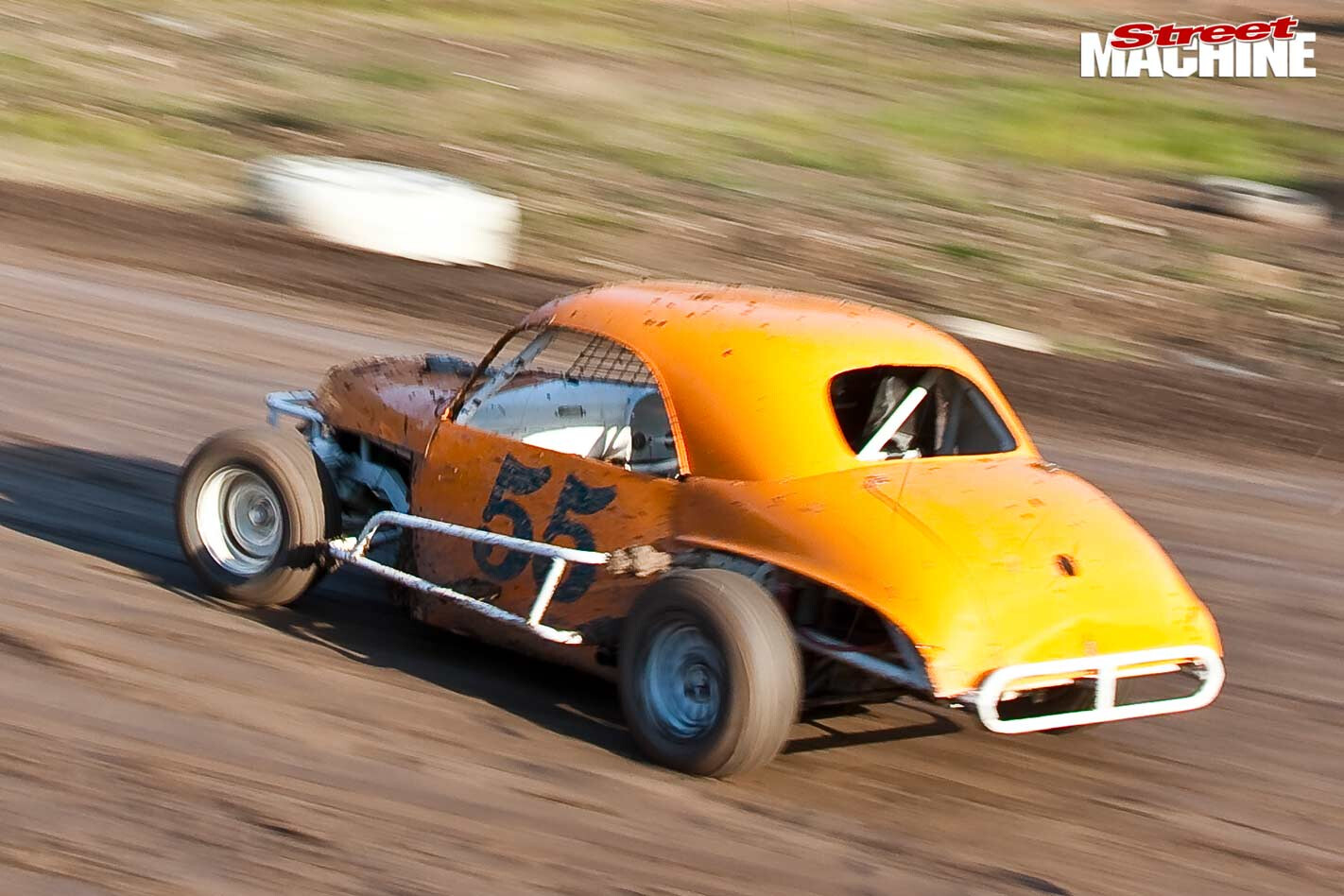 7. Can’t pick this one? Racing out of turn one is Scotty Naun’s wildly modified FJ Holden running a twin-carbed Holden grey engine. This sedan was originally raced by Ivor Green at the Melbourne Speed Bowl 8. Mick ‘Hollywood’ Dann and his father Steve open up their workshop in Kilsyth every Friday for the Aces of Spades to come and resurrect these old speedway hot rods. Mick’s ‘Big Bad Red’ ’37 Ford coupe is a heavyweight survivor with many similar cars of the era destroyed in ‘butcher’s picnic’ no-rules races 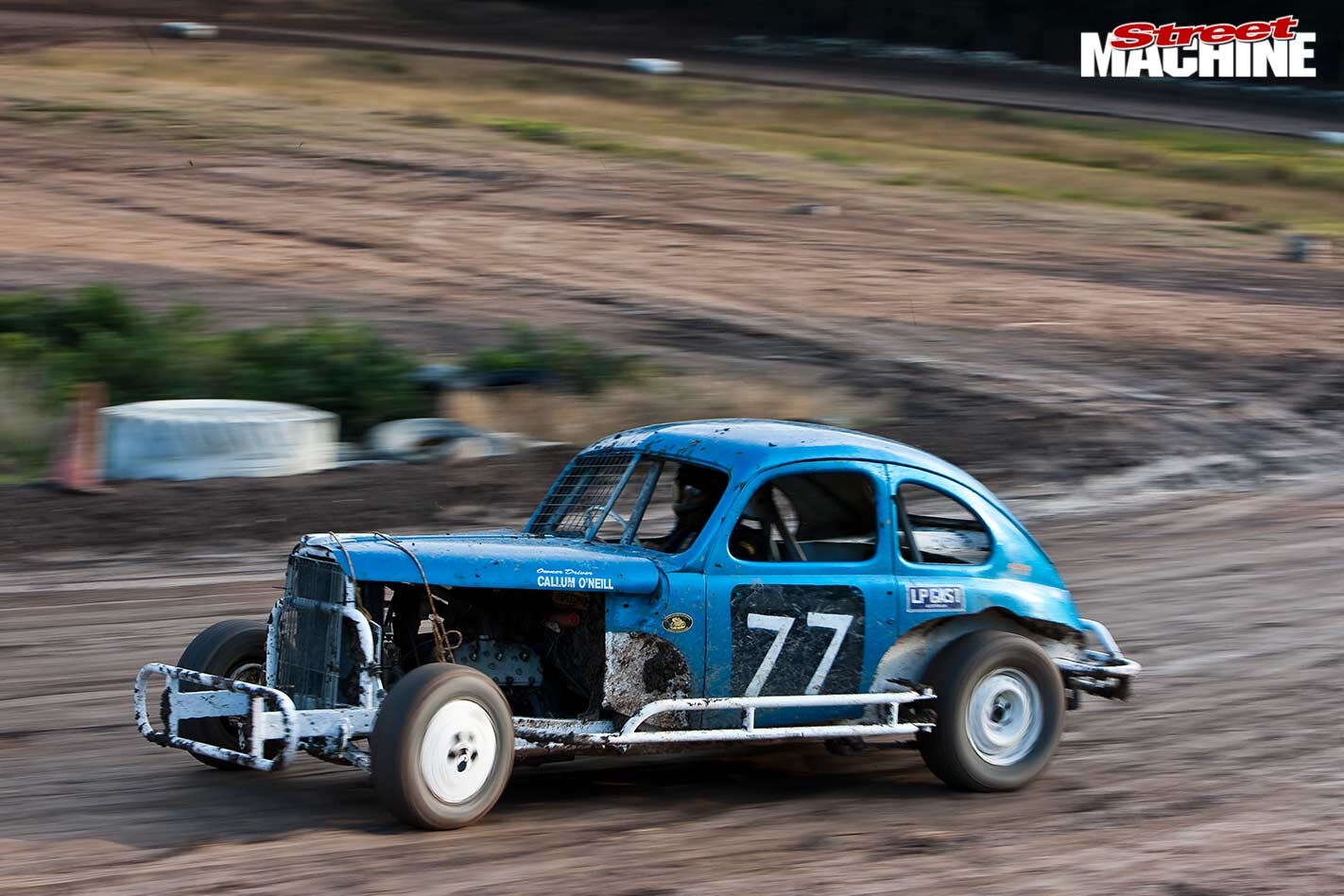 9. Callum O’Neill’s old number 77 is a shortened 1946 Ford that used to race at St Arnaud in the 60s. Callum is the youngest of the Aces of Spades at 18 and has a blast mixing it with the older Aces with his four-inch stroked flathead Mercury engine