This stock-looking VW Golf is set to take on the twin turbo V8 monsters in Street Machine Drag Challenge! With 10-second quarter mile times to its credit, this is one super-fast Golf R.

THERE are a few sleepers amongst the 50-odd contenders in this year’s Street Machine Drag Challenge, but none are as snoozy as Jared Bailey’s 2012 Volkswagen Golf R. The all-wheel-drive sleeper will be driven by Jared’s brother Tim, as Jared has work commitments. Tim already has one Drag Challenge under his belt and is keen to show off what this impressive little car can do. The Golf has so far run a stonking best of 10.56 seconds, but as Tim weighs in a little heavier than Jared, he reckons it won’t quite be doing those numbers at Drag Challenge.

So what makes the Golf tick? The 2.0-litre four-pot is internally standard, but runs a bunch of goodies from APR, including a GTX2867R turbo, upgraded intercooler, exhaust system, fuel system, intake and tune. The DSG gearbox has a set of SSP Sidewinder clutch plates and a APR tune, and the car rolls on a set of Mickey Thompson ET Street radials. The boys run the car on Sunoco 260 GT fuel at the track, and that is about it! 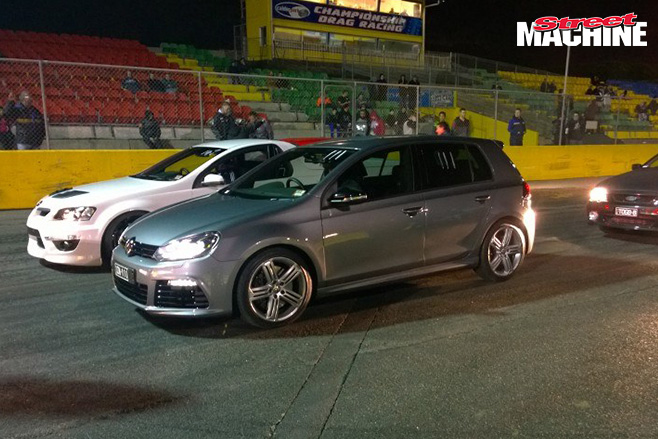 “We ran it up on DTM’s four-wheel-drive dyno for the first time last week, and it makes 369hp at all fours on BP 98 and 406hp on race fuel,” Tim says. “That was more than we were expecting, but then it does take some grunt to run mid-10s.”

Despite the power, the Golf remains a very comfy car. “It will be a nice thing to do Drag Challenge in,” Tim says. “It has a/c, heated seats, Bluetooth, standard suspension and all the fruit. It is fuel-efficient too; it gets about 700km out of the 55-litre tank. It was Jared’s daily driver for a long time and has always been driven to the track. Guy Harding and the guys at APR Australia have been a big help, along with Dean Cootes at Fast Stuff.”

While the Golf behaves like a stocker in traffic, it is a different story on race day. “The launches are pretty violent,” Tim says. “Even on the pump-fuel tune and on the factory tyres, we logged a 0-100km/h time of under three seconds. The all-wheel-drive system is an on-demand deal. When it detects front wheel slip, it can direct up to 50 per cent of the power to the back wheels. For the launch it runs on all fours, but for most of the pass it is actually in front-wheel-drive. We’ve tried locking it in AWD, but the car drops around 4mph in the top end, so we just leave it in the factory setting.” 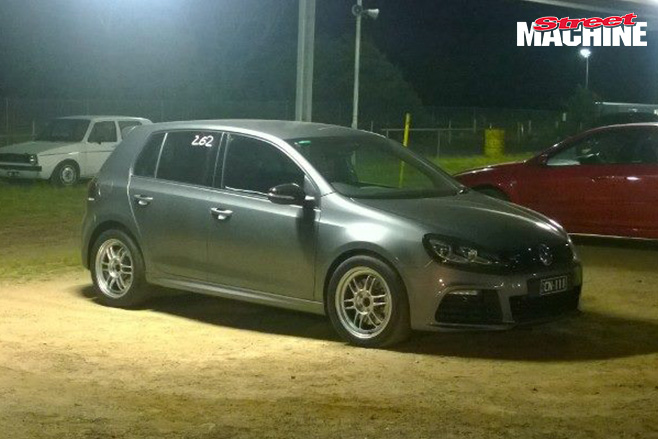 Being an all-wheel-drive car, the Golf will have to run in the Outlaw Blown class at Drag Challenge, against the likes of Harry Haig’s turbo big-block HQ, Brendan Cherry’s HQ Monaro and Adam Rogash’s VT Clubsport. All of those cars are well into the eight-second zone, but as the saying goes, to finish first, you first must finish, and the little Golf’s reliability is going to count for a lot at the pointy end of the event.