DAY one of Street Machine Drag Challenge went off nicely at Calder Park Raceway in Melbourne yesterday. We shared the track with a few of the toughies in town for the Jamboree event, giving the whole deal a buzzy vibe. Now that we’ve seen what times the field has run early – and seen who has made it to the first night’s stop without too much trouble – here are some cars to keep your eyes on at the sharp end of the event. 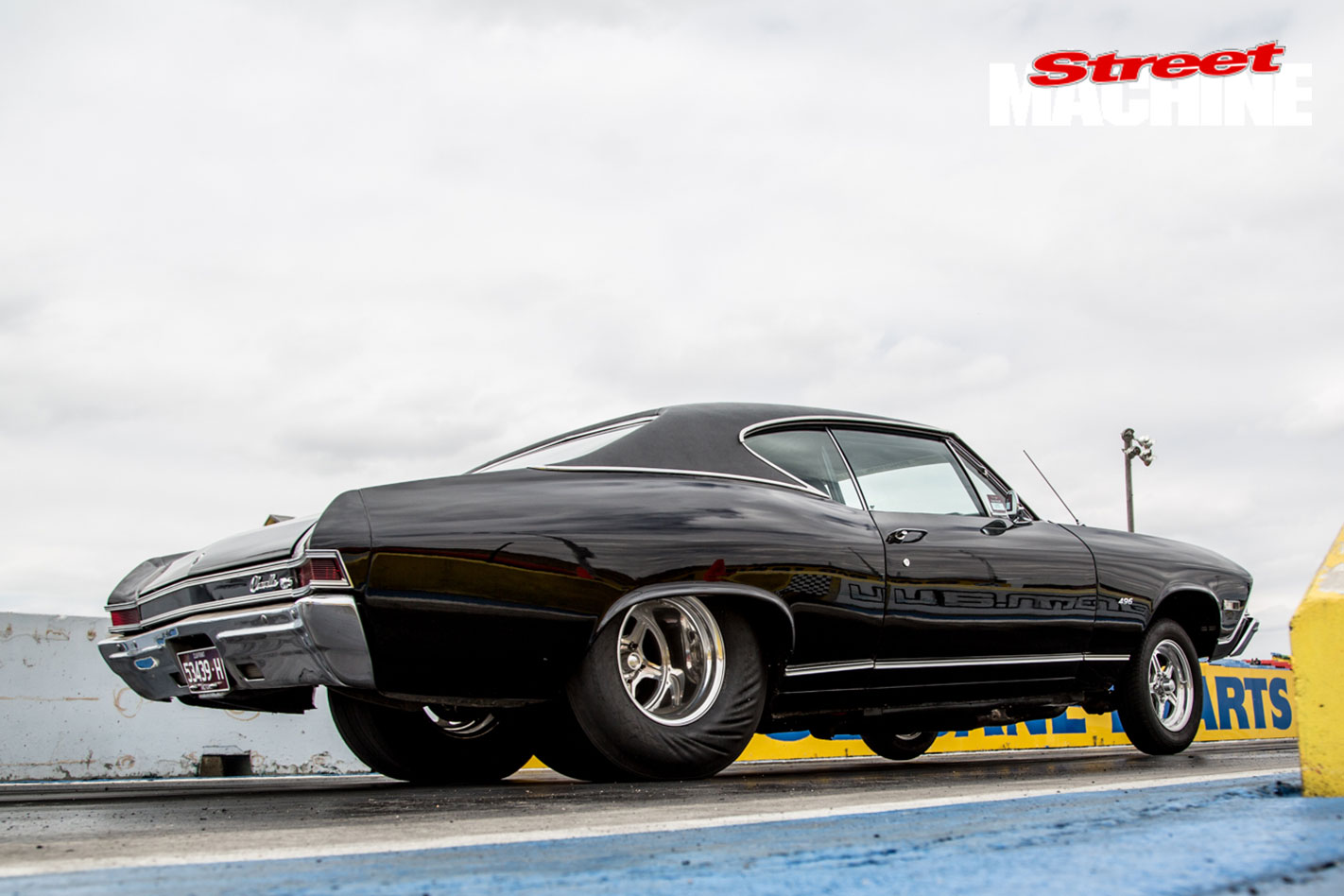 But first, we have to deal with a couple of scratchings, starting with Leighton Kelson’s Chevelle. The beast lost a bonnet on-track and that was all she wrote. 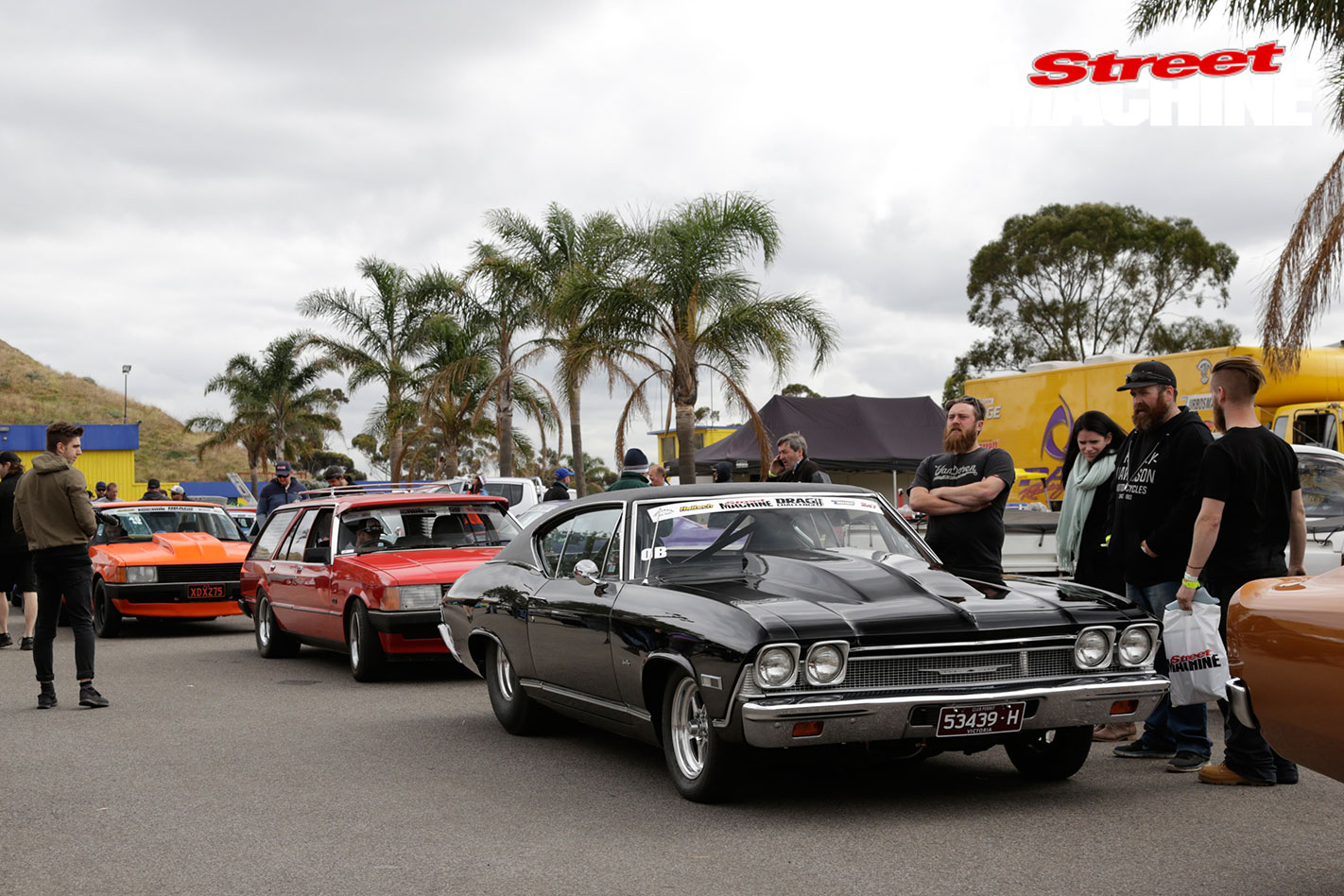 It is a damn shame Leighton didn’t make it. I mean, just look at that thing! So tough. 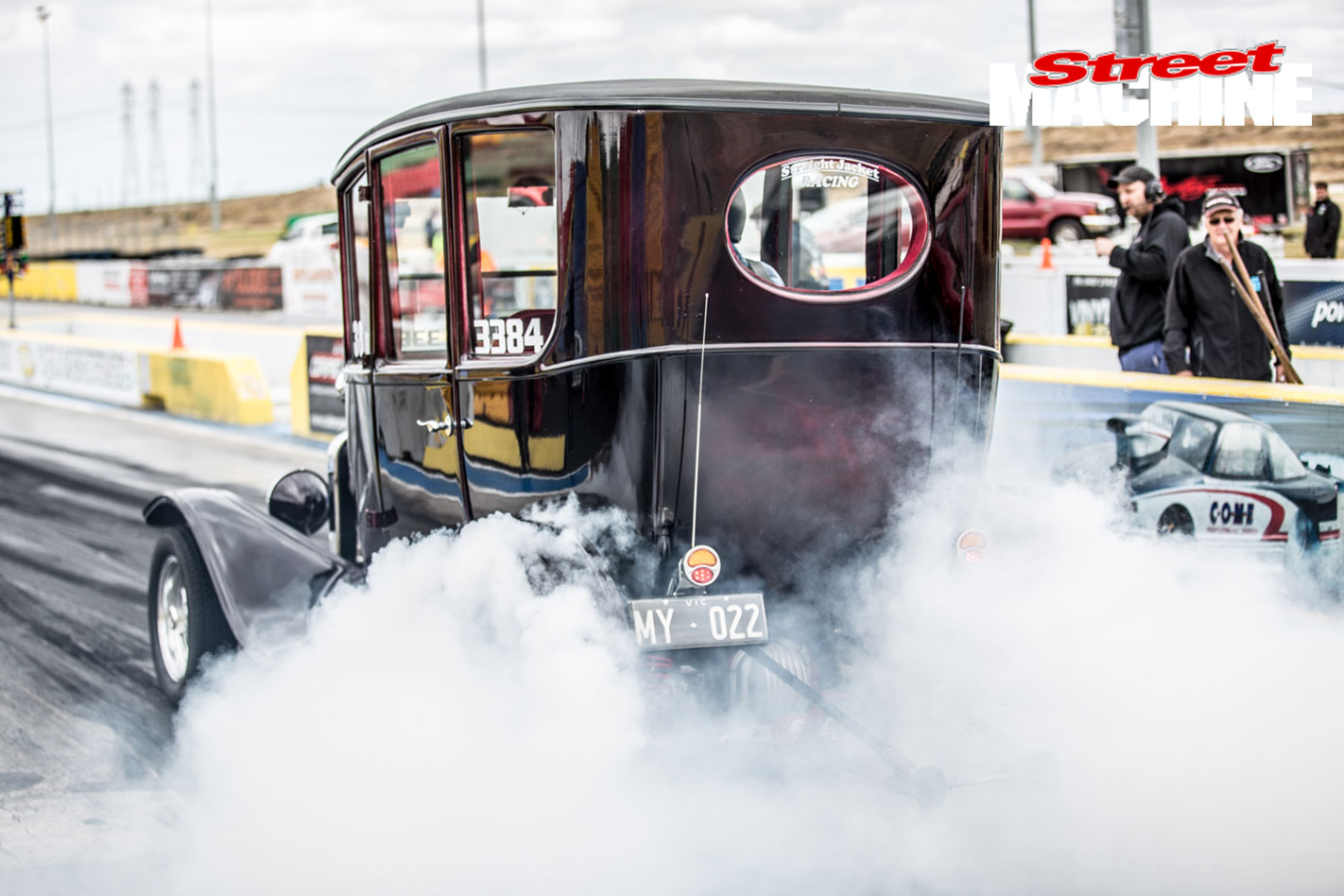 Another car we were very say to lose was Noel Inman’s Model T. Noel has raced it at tracks all over the country and we were looking forward to having him along for Drag Challenge. A busted engine put paid to that. 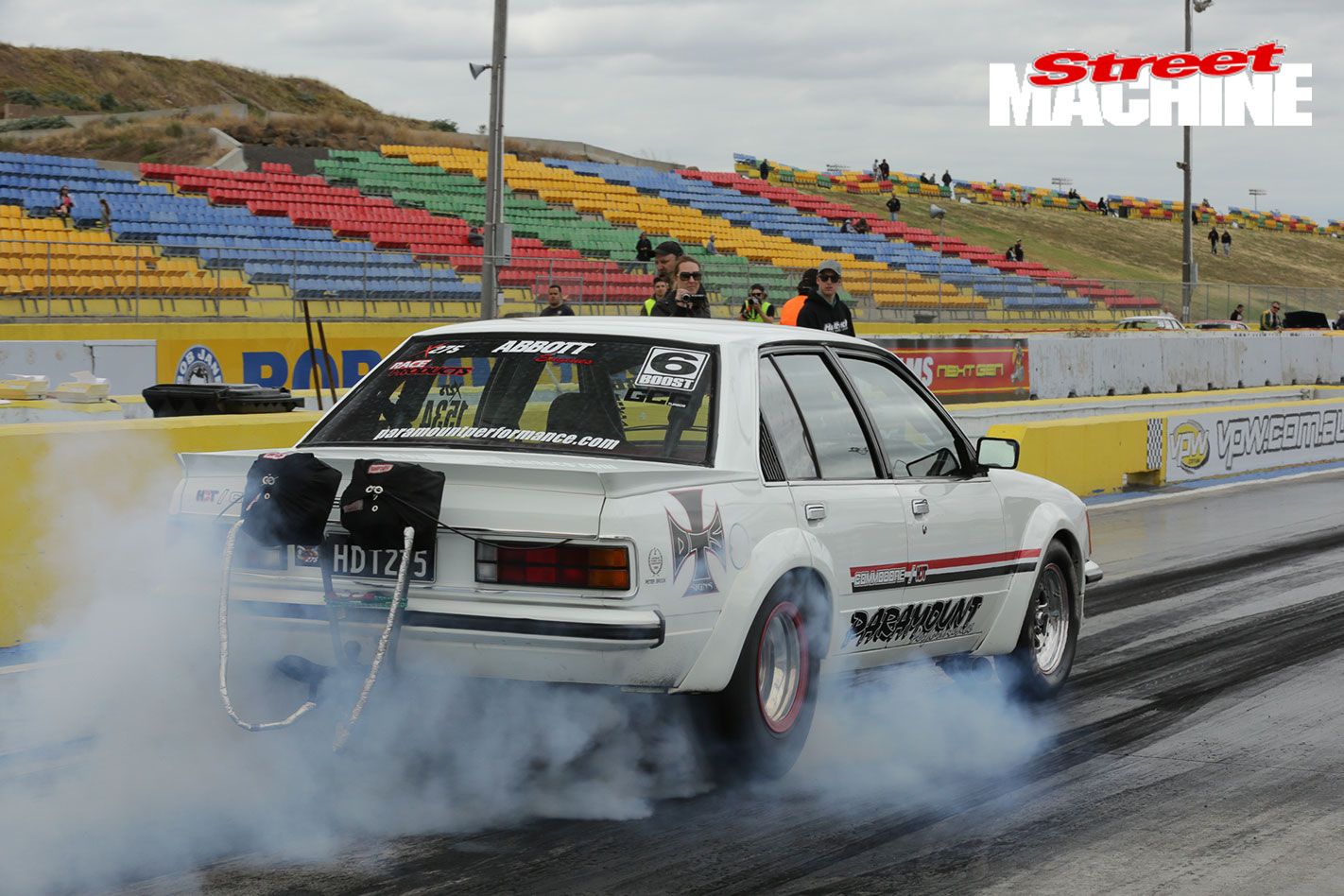 The favourite for the overall title and the win in 24.7 Fittings Radial Blown is again Terry Seng from Paramount Performance. Not only are they the only car in the seven-second zone, but Terry has a very talented crew along for the ride. The team ran a 7.86-second pass on the sticky Calder surface, but soon found that they’d busted a lifter. That meant a thrash to fix it, but they did it in time to arrive in Hamilton before midnight. 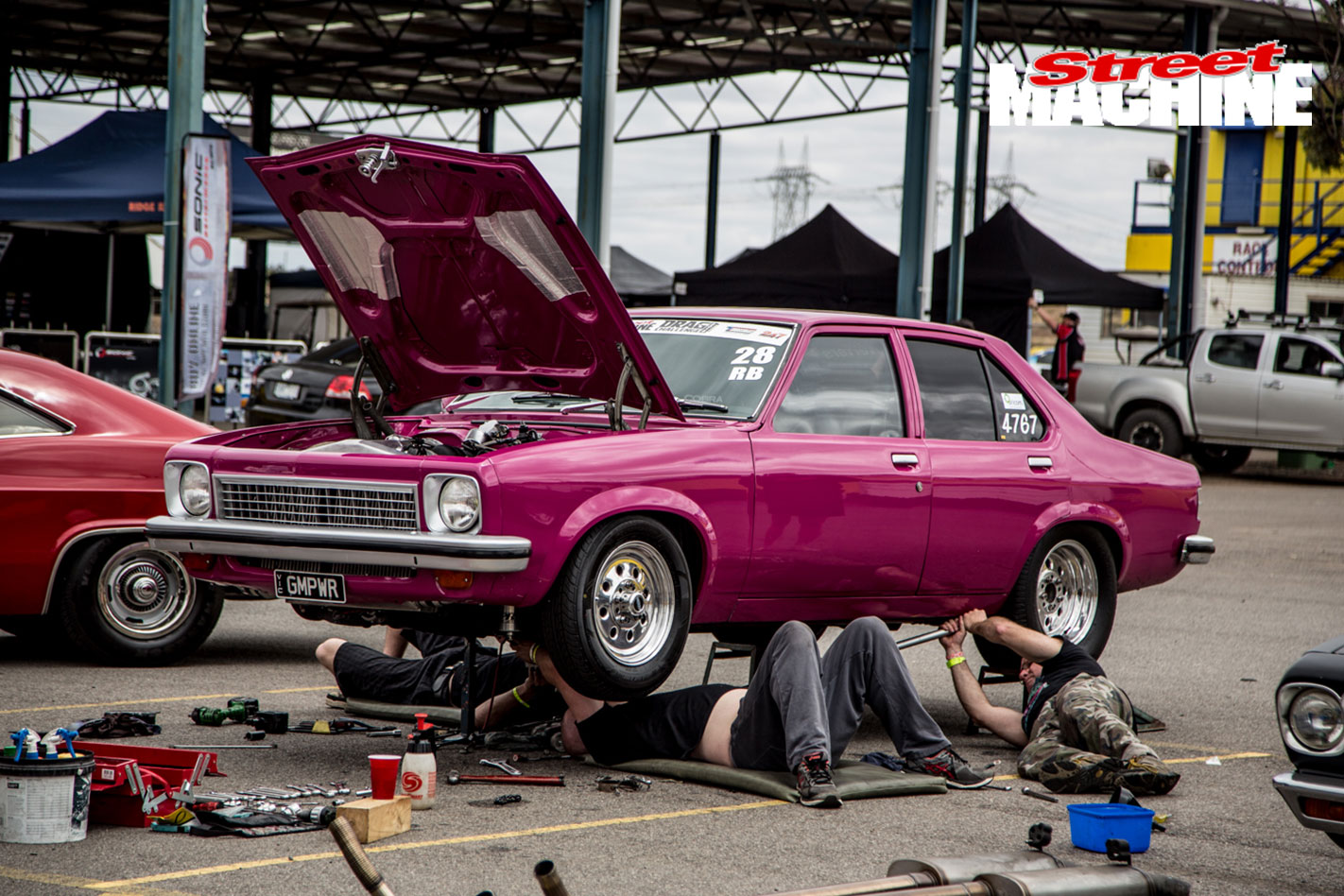 Last year’s champion was Quentin Feast and he also had dramas at Calder, breaking a gearbox. Quentin also has a stellar crew and they also got the new box back in and the car on the road. 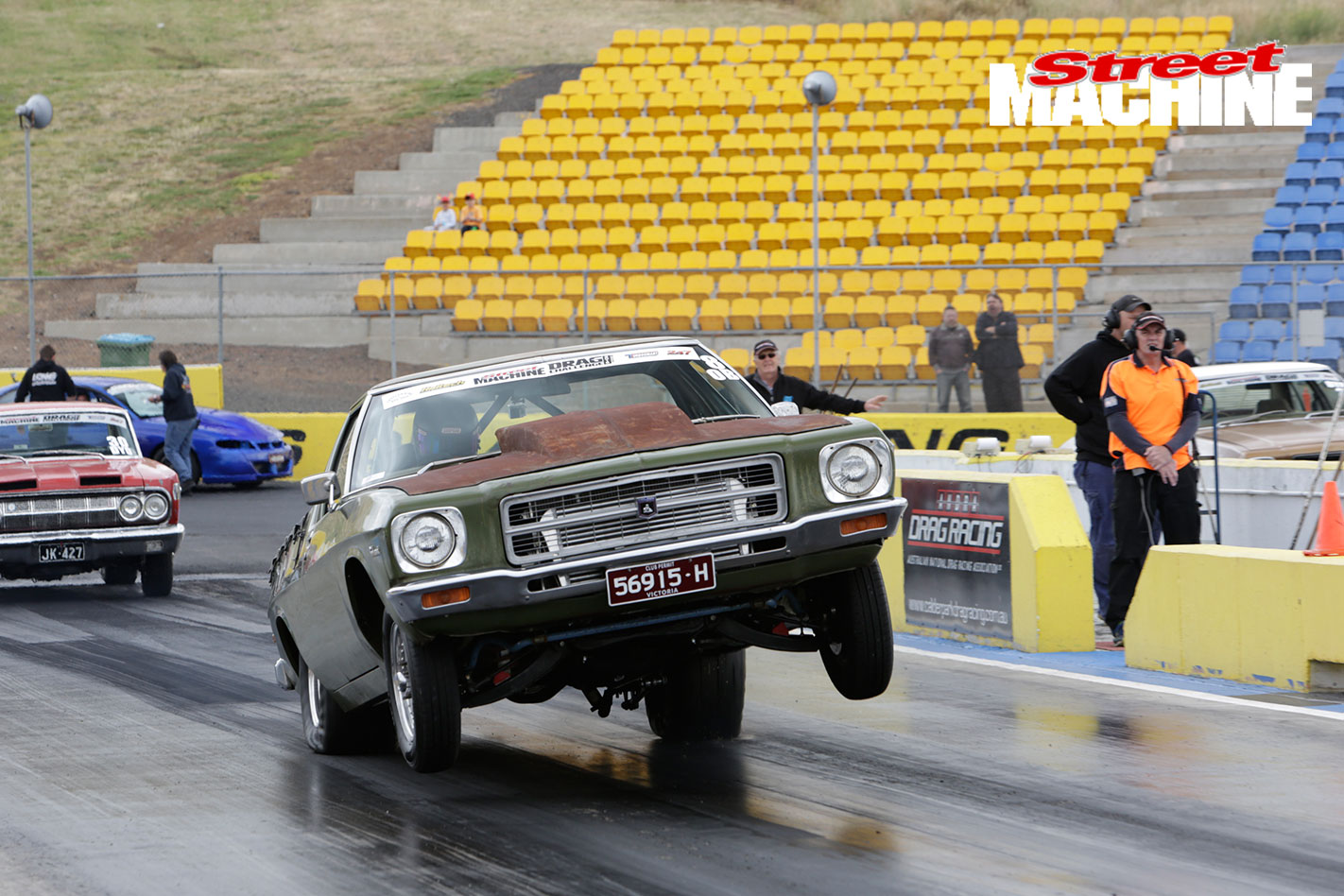 The unofficial best wheel stand award would have to go to Rodney Browitt’s LS-powered HQ ute. 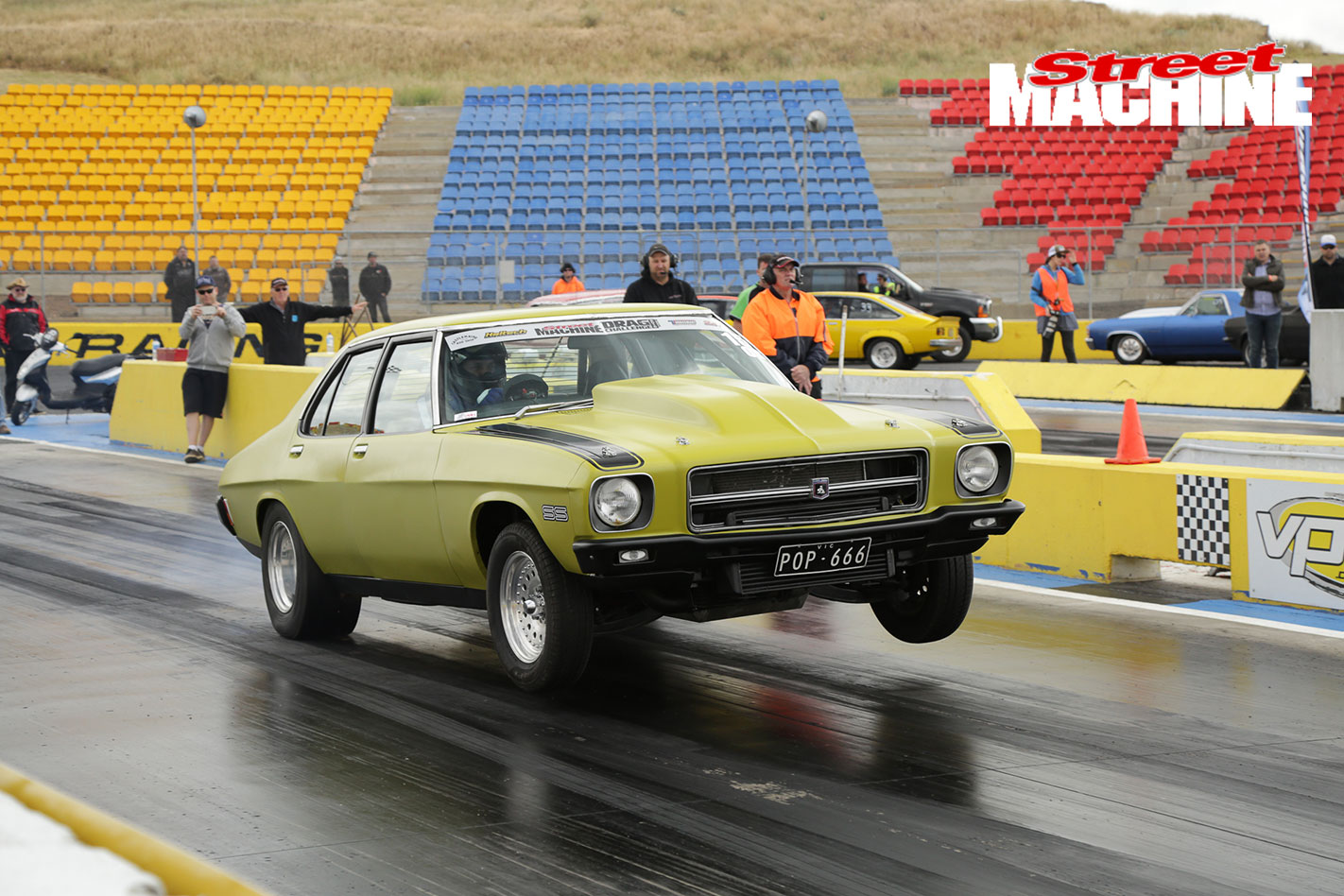 Harry Haig was running off his best pace today, but was looking cool with his new SS colour scheme. If Harry can get the car to hook up, he could be a real danger in the Turbosmart Outlaw Blown category and possibly overall too. 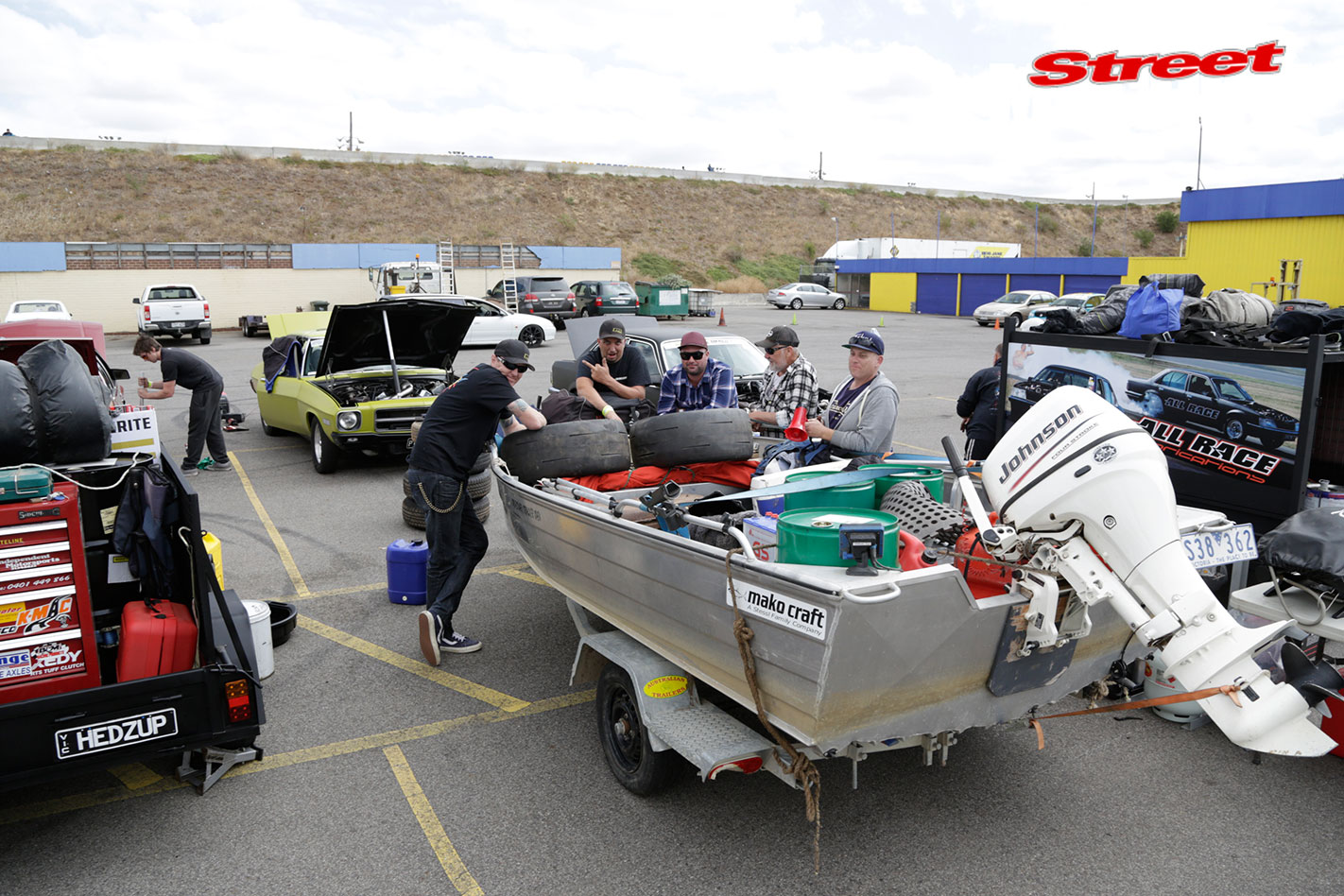 Along the way, Harry plans to go fishing, so he brought a boat. It is just common sense! 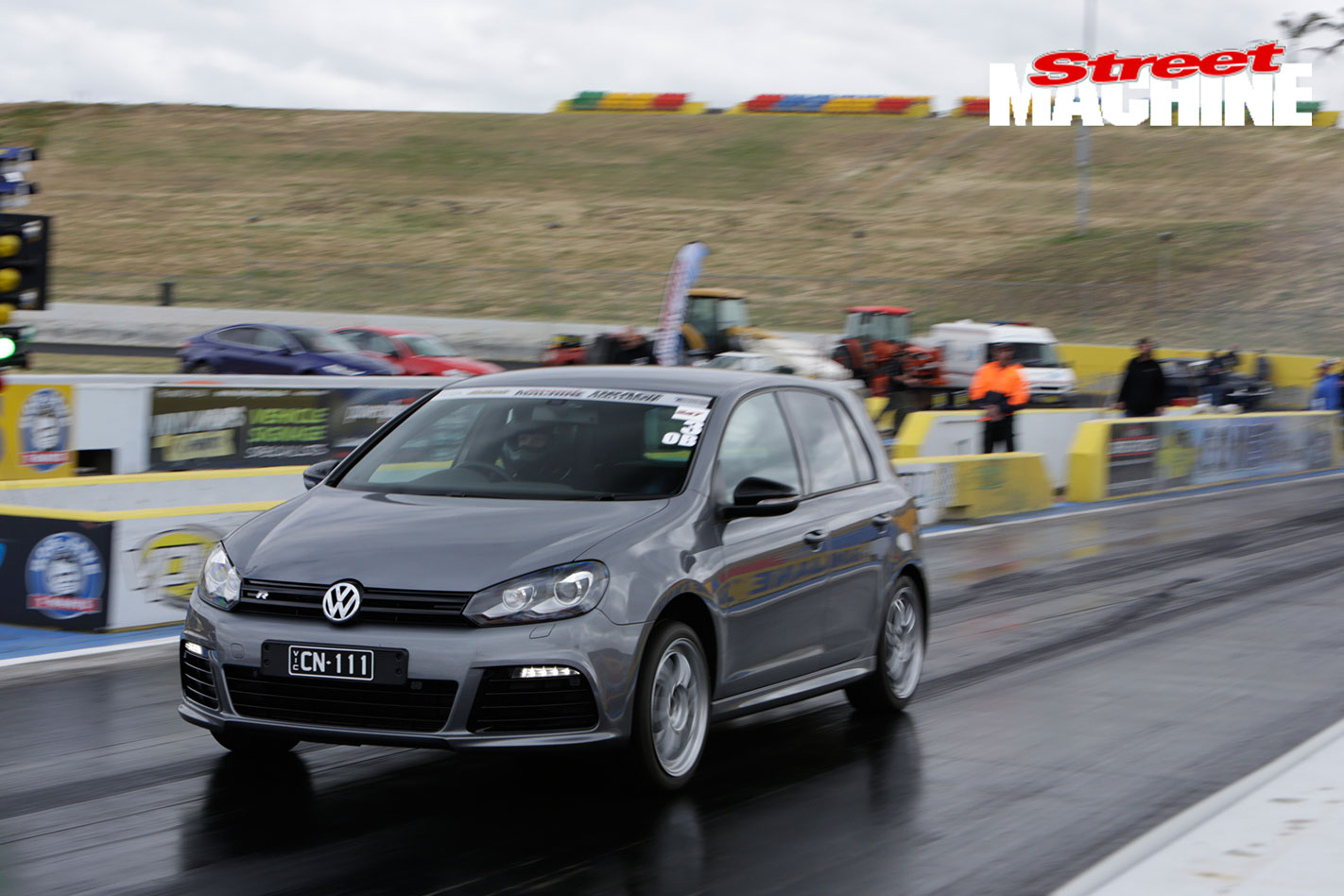 The best sleeper would have to be Jared Bailey’s Golf R, driven by his brother Tim. Running mid-10s, the Golf is stunningly fast, but outgunned in Outlaw Blown. Nevertheless, it is a small class and the Golf could be in line for a podium finish if some of the big hitters fall by the wayside. 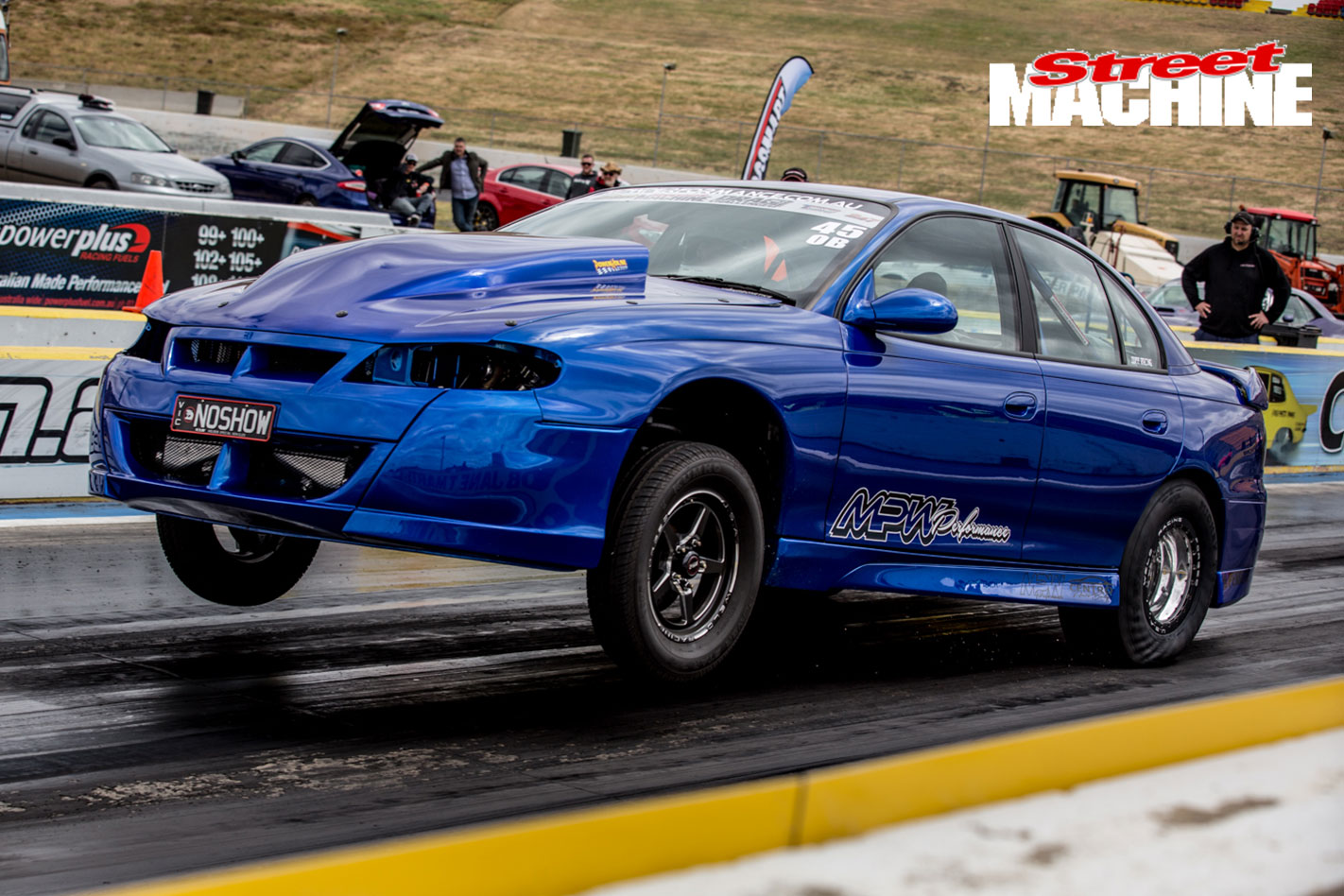 Adam Rogash’s VT Clubsport is a front runner in Outlaw Blown and could take out the overall win if his car continues to be reliable. Adam has master engine builder John Pilla riding shotgun, but Johnny has to race back to Melbourne today for a mate’s wedding! Seriously, who books in a wedding in Drag Challenge month? 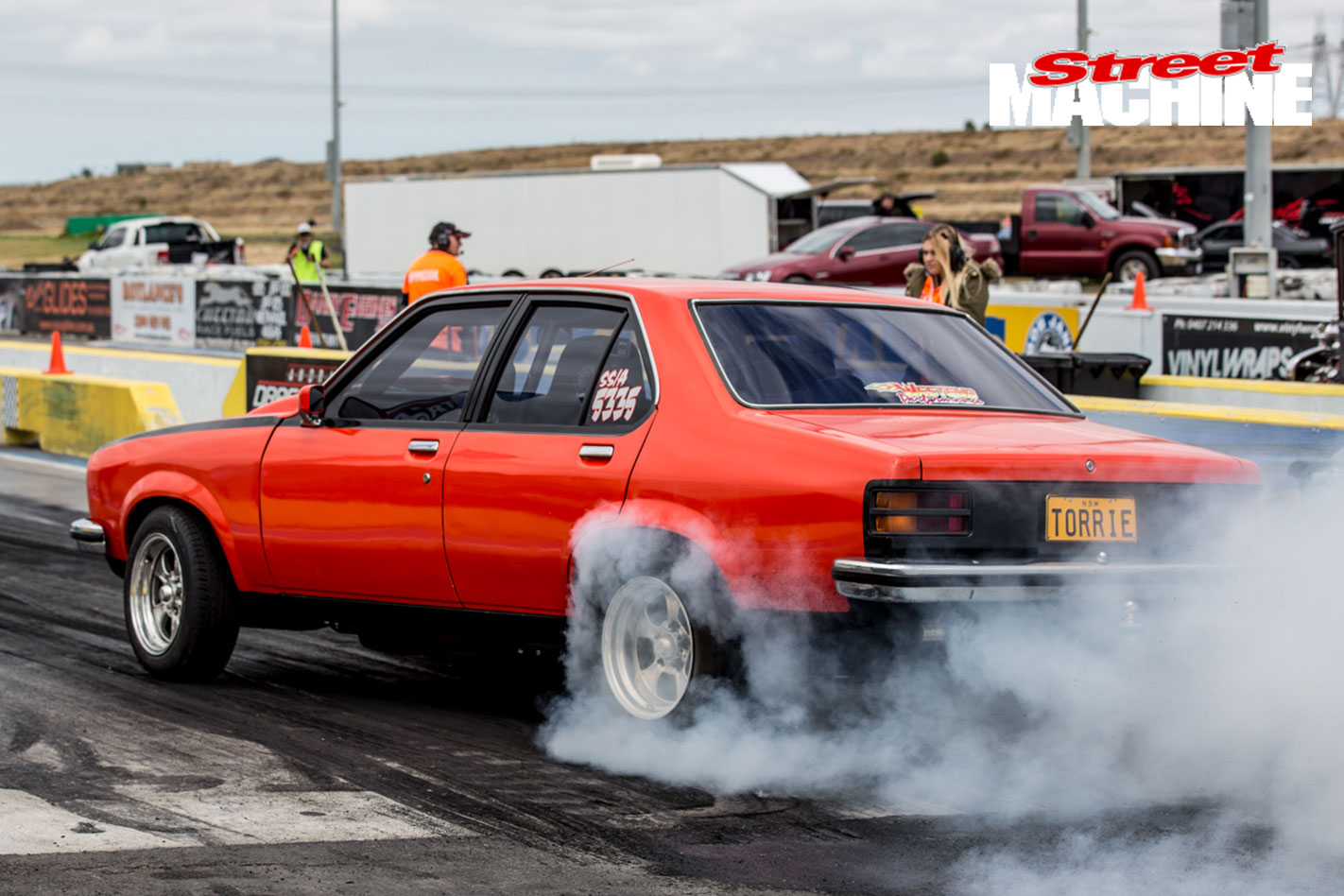 Best sounding car? That is a tough one, but Darryl Elliot’s Torana sounded fantastic at Calder. 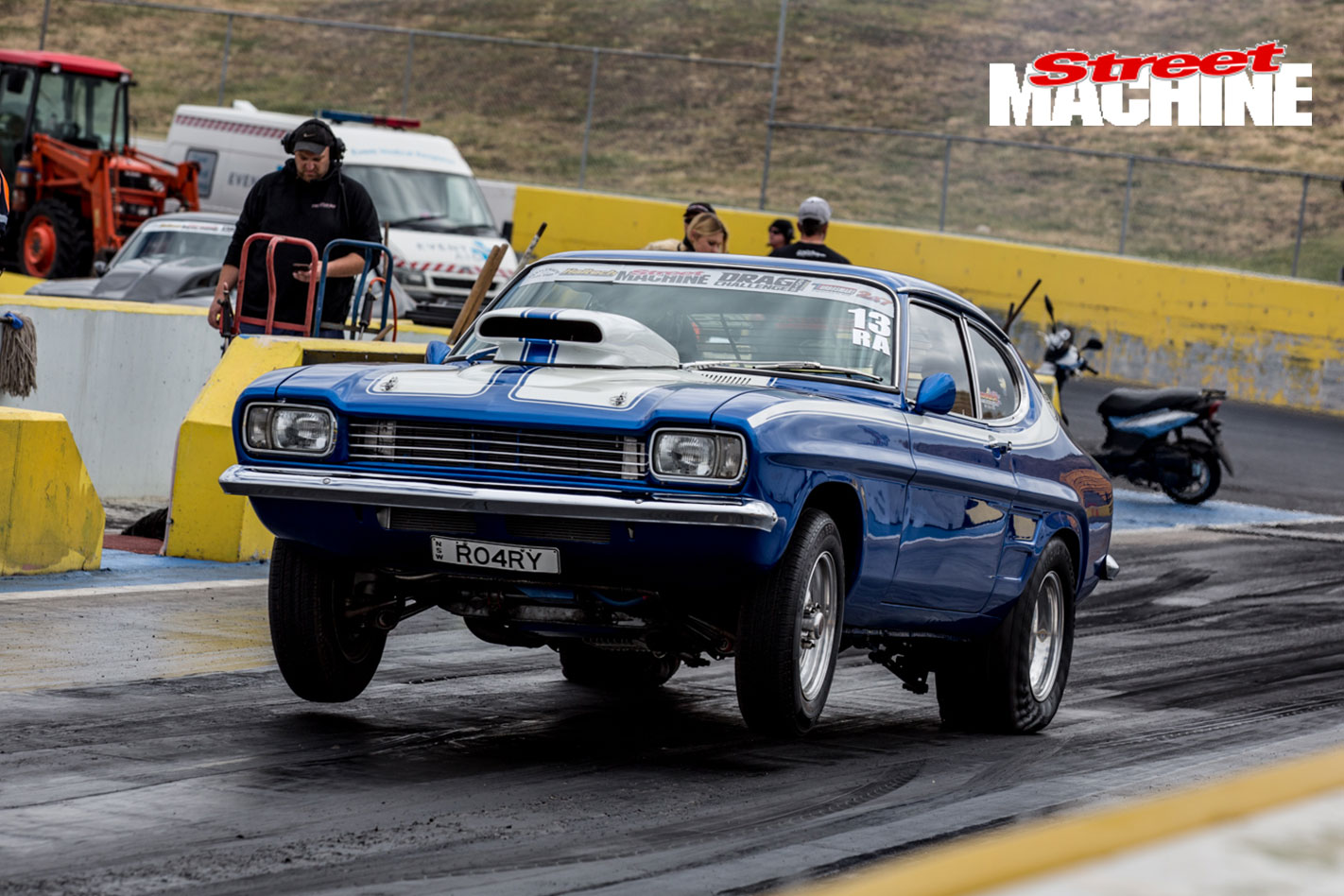 Tristan Triccas won the Street Radial Aspriated gong last year and is going to be tough to beat in 2015. The class is sponsored by Haltech. 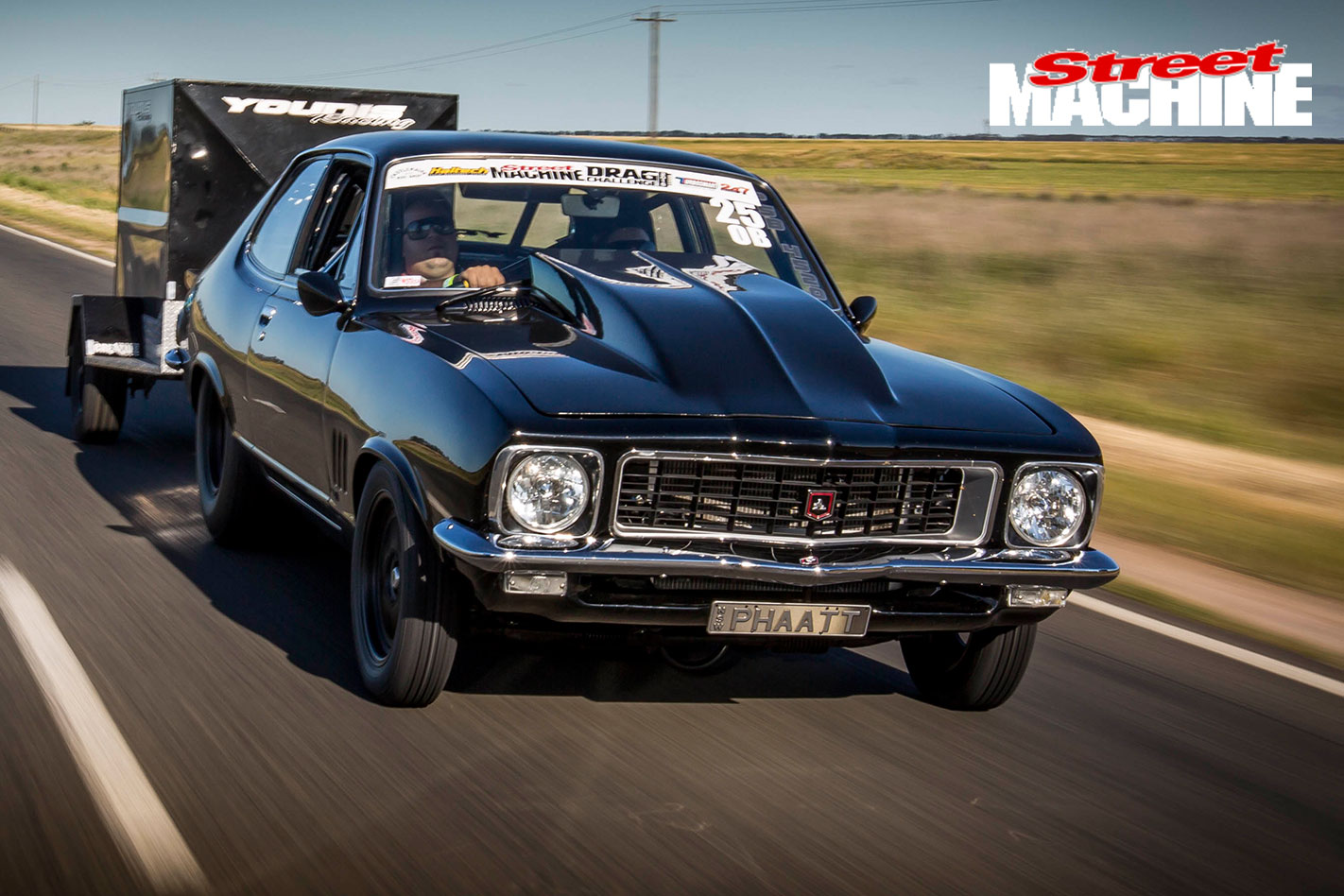 The Toughest Pro Street attitude award will surely go to Louis Younis’s LJ Torana. The crew broke the drawbar on their trailer, but they managed to get it fixed and made it to the first night’s rest with plenty of time. 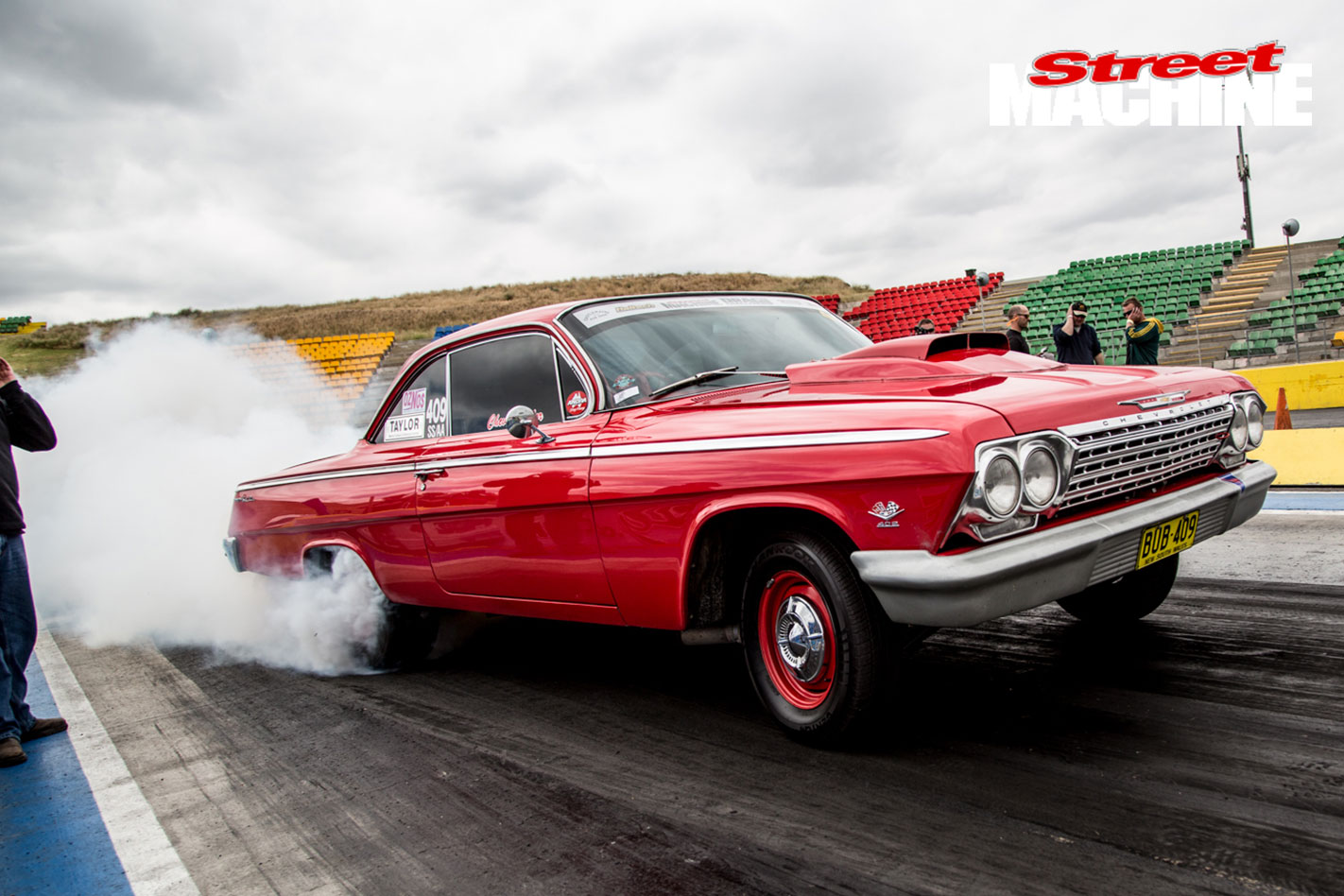 Carl Taylor’s bubble-to Chev runs a stroked 409 motor. It is a thing of timeless beauty and also a proven warrior in the Sydney DYO wars, making one of the favourites to take out that class, sponsored by Castlemaine Rod Shop. 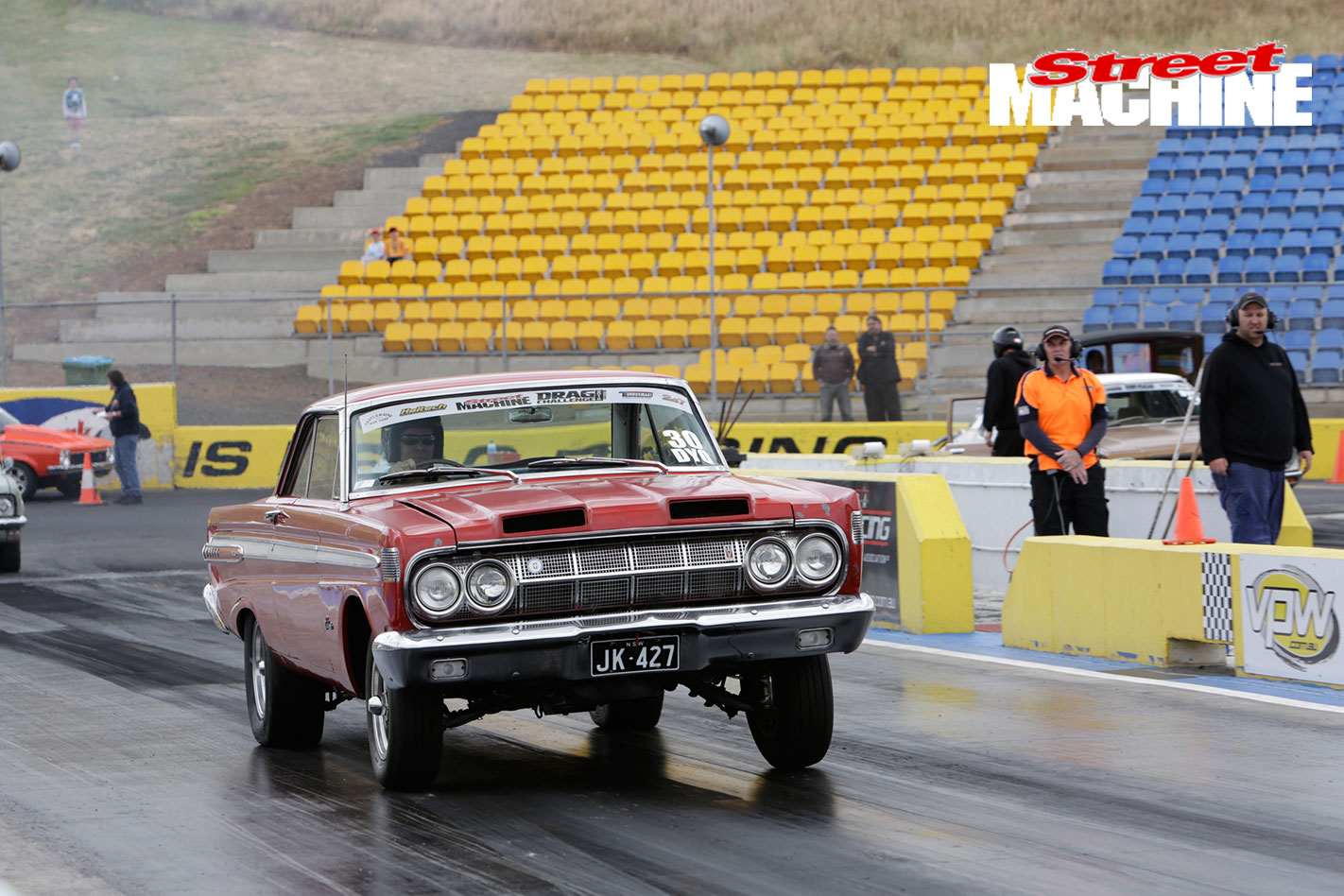 Keeping Carl honest in DYO will be his mate John Kerr in his classic Mercury Comet Caliante. 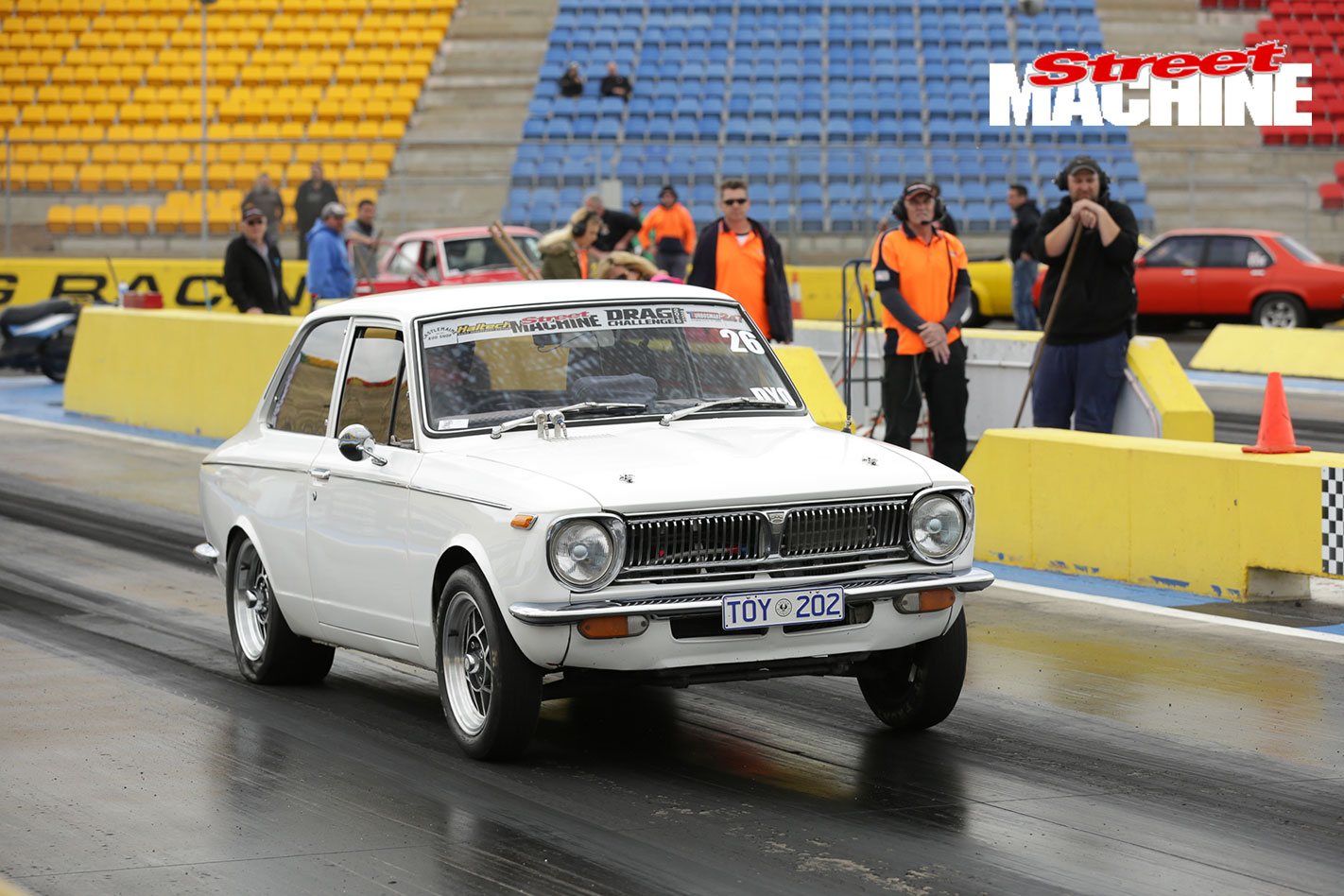 One of the surprise packages of this year’s DC is Matthew Smart’s Corolla, packing a nitrous-fed Holden six in DYO. 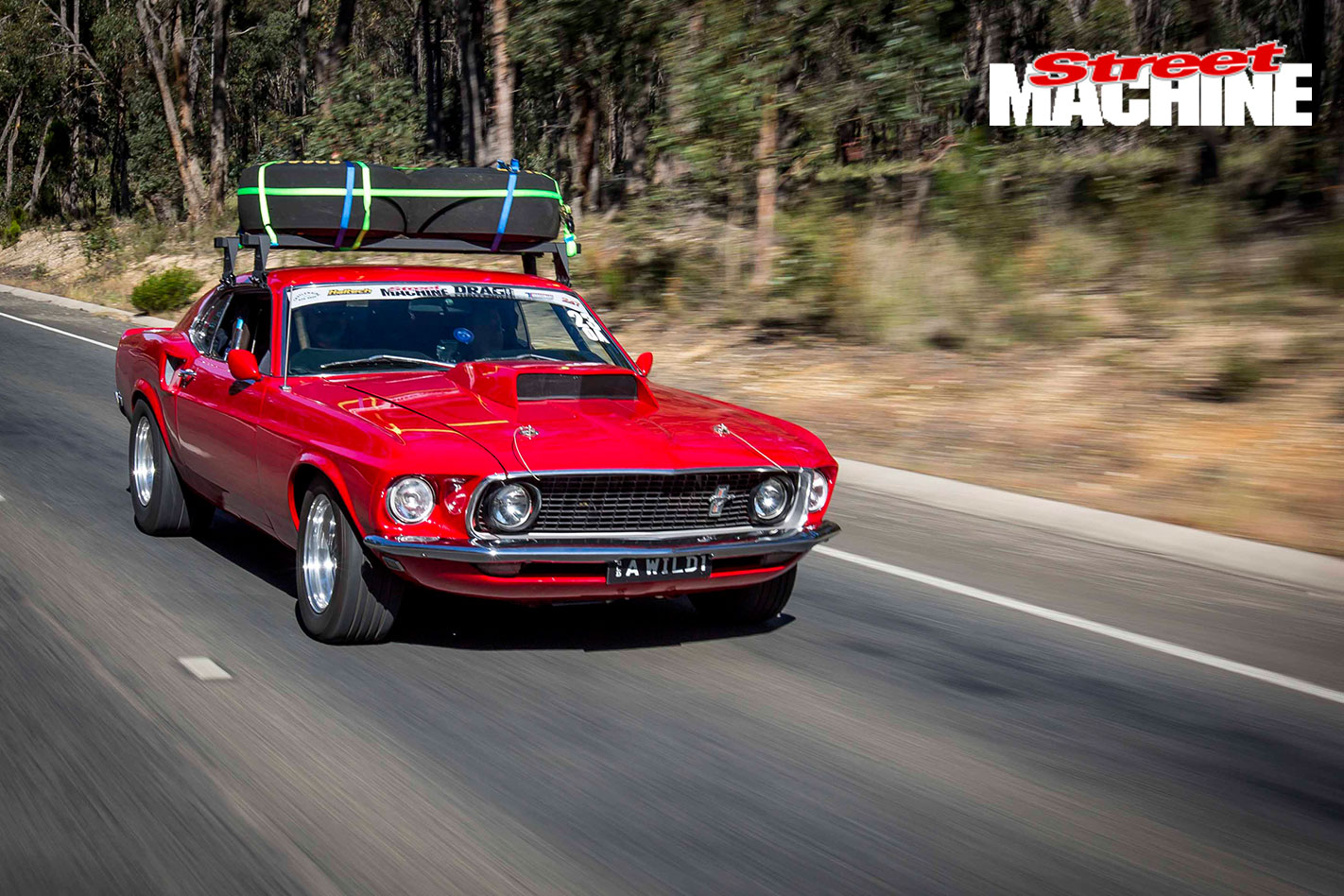 Mark Clifford’s Mustang packs a 600ci Shotgun motor and could be a threat in DYO. 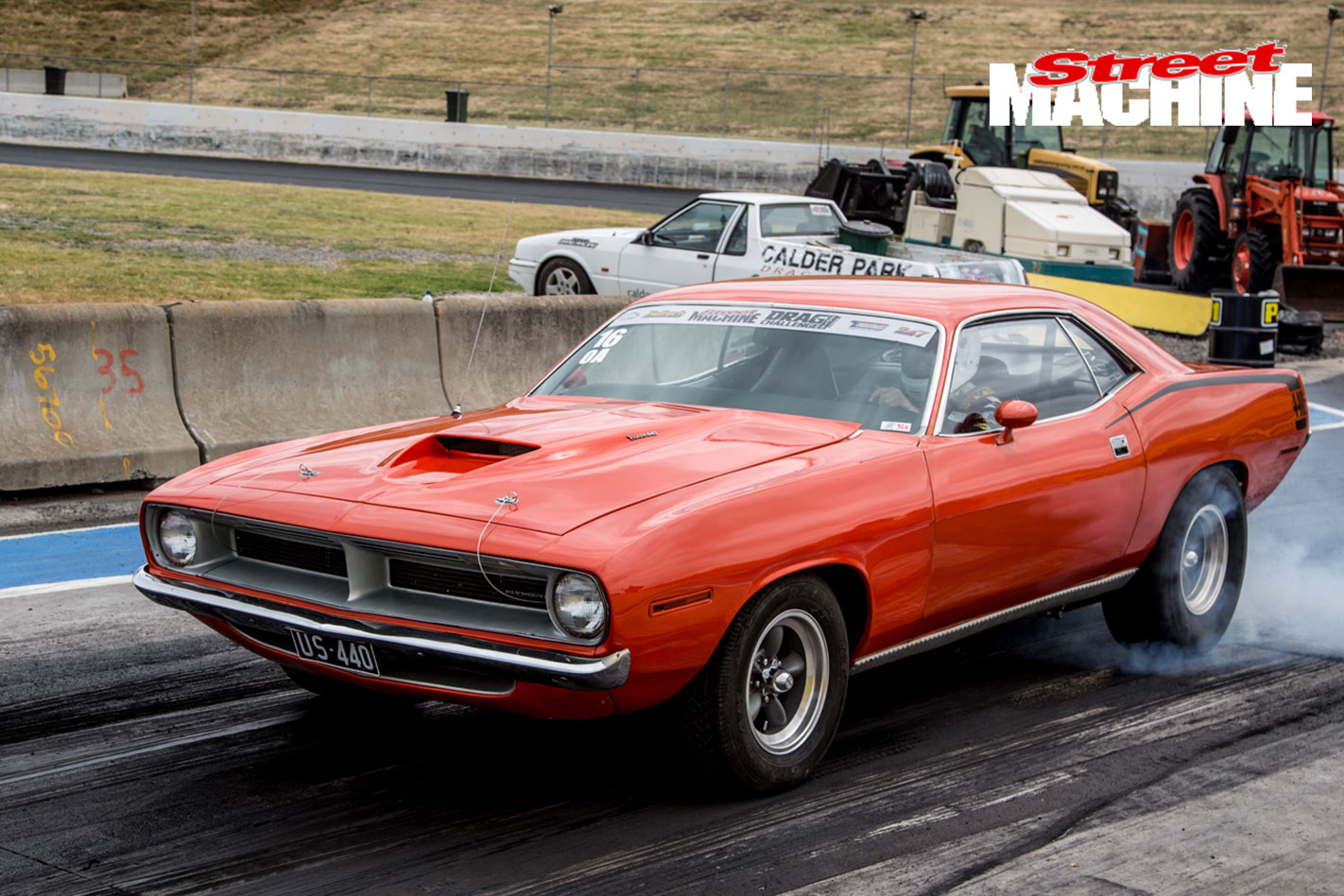 Steve Reiman is a veteran of Drag Challenge and multiple Drag Weeks. His ‘Cuda is surely in the running for the Most Boner Worthy award. 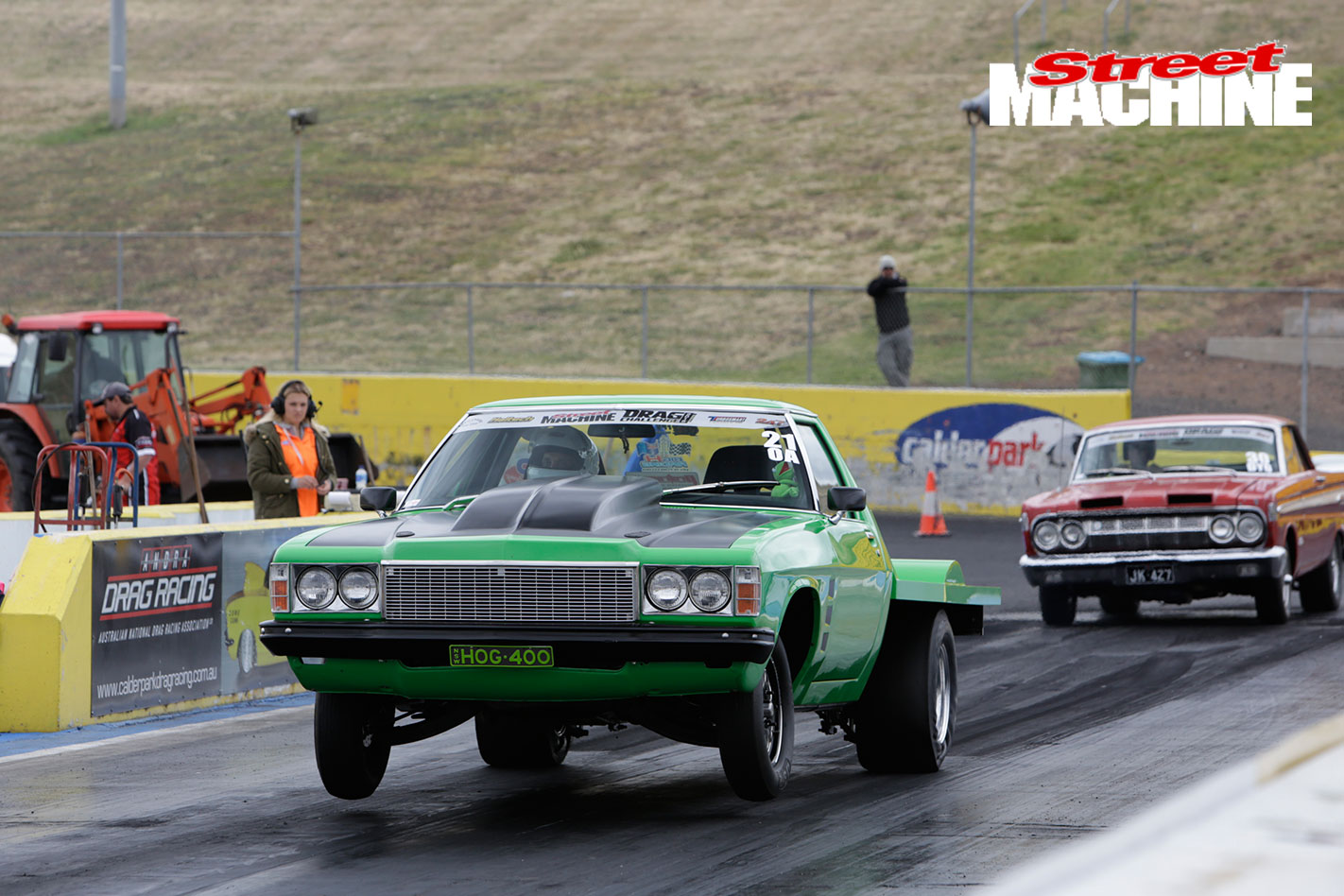 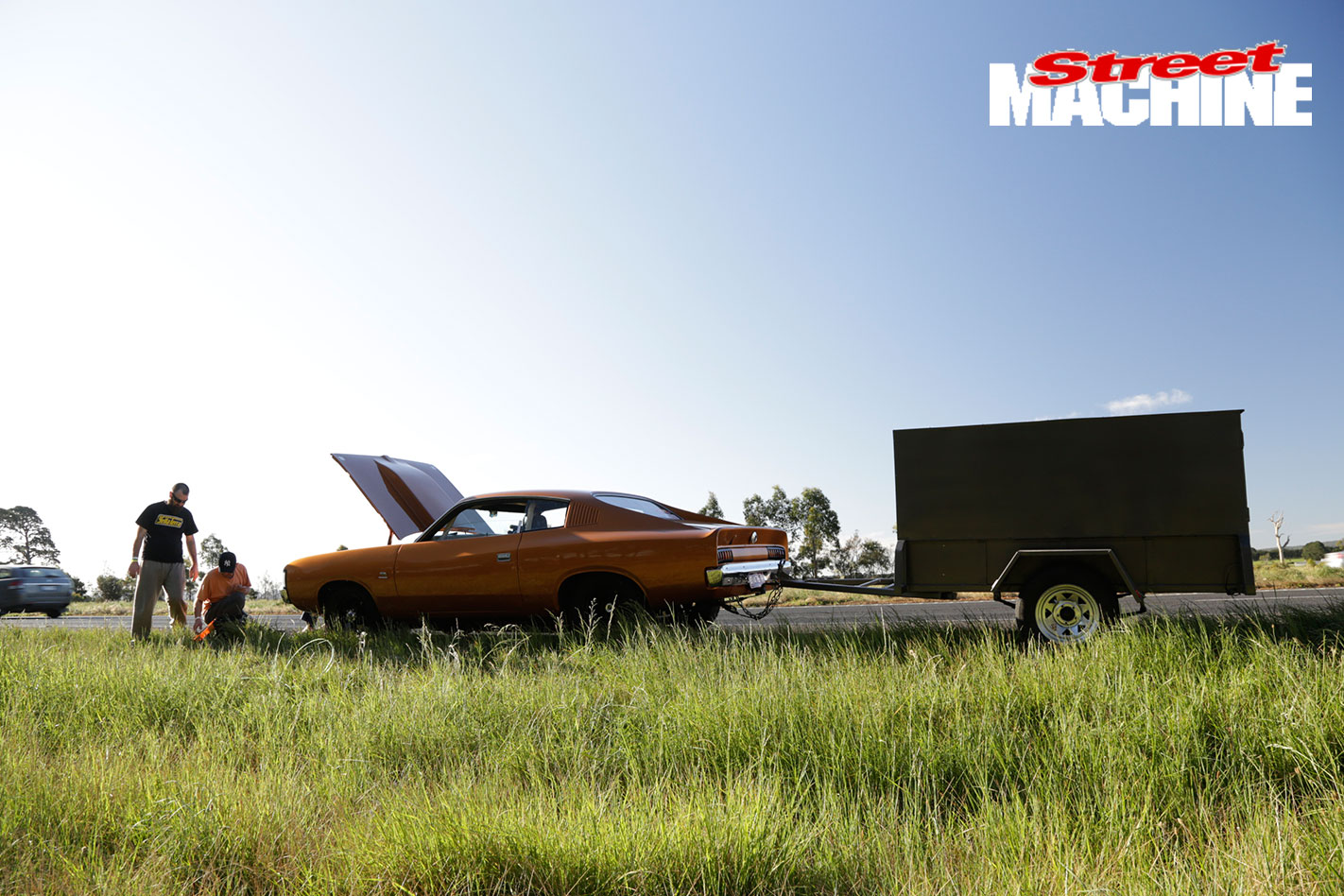 Brad Keem and his turbo Hemi six-powered Charger would have to be a good chance for the Fastest Six Cylinder title, but was having a few gremlins yesterday. 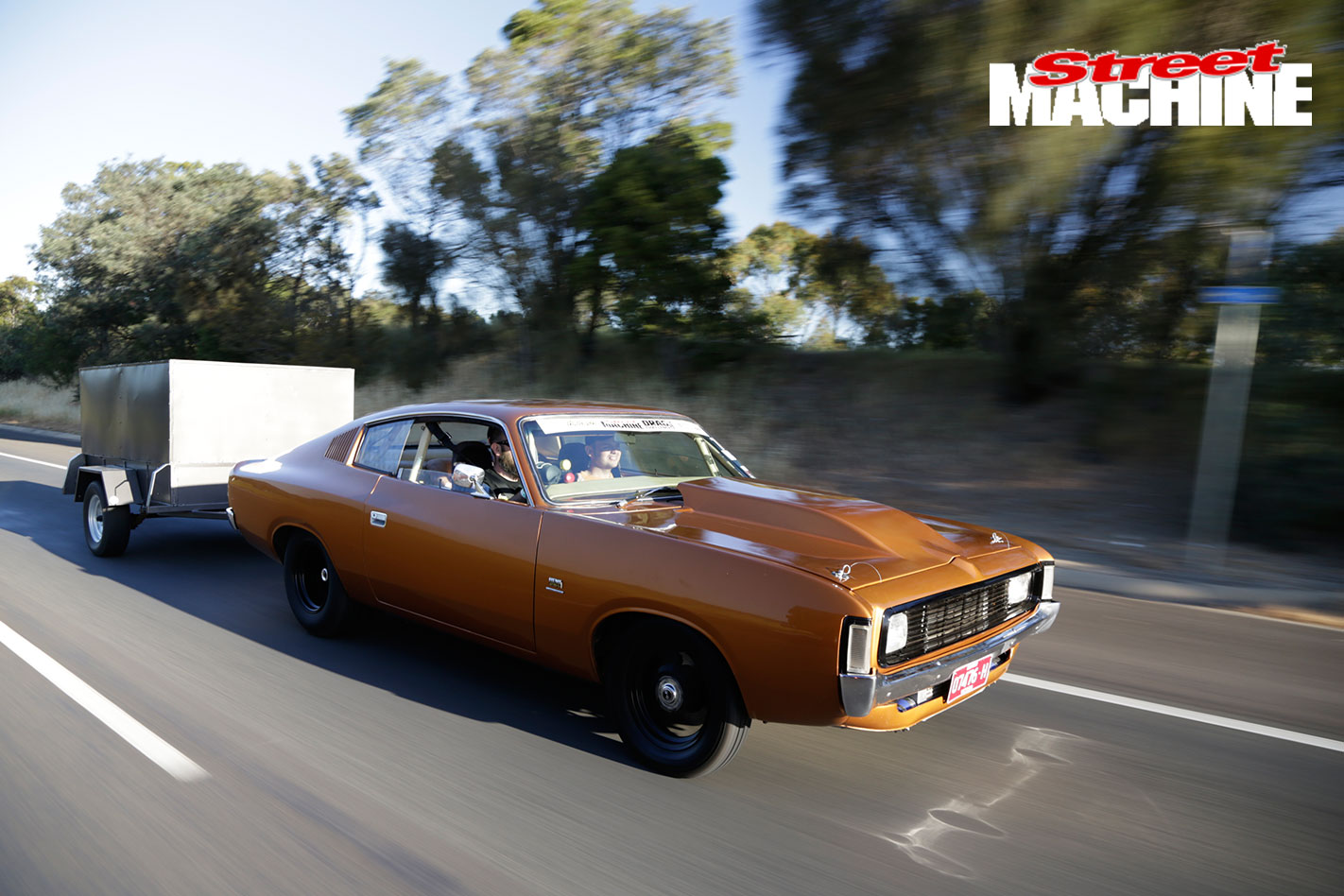 After some quick roadside work, the Charger was back on the road. 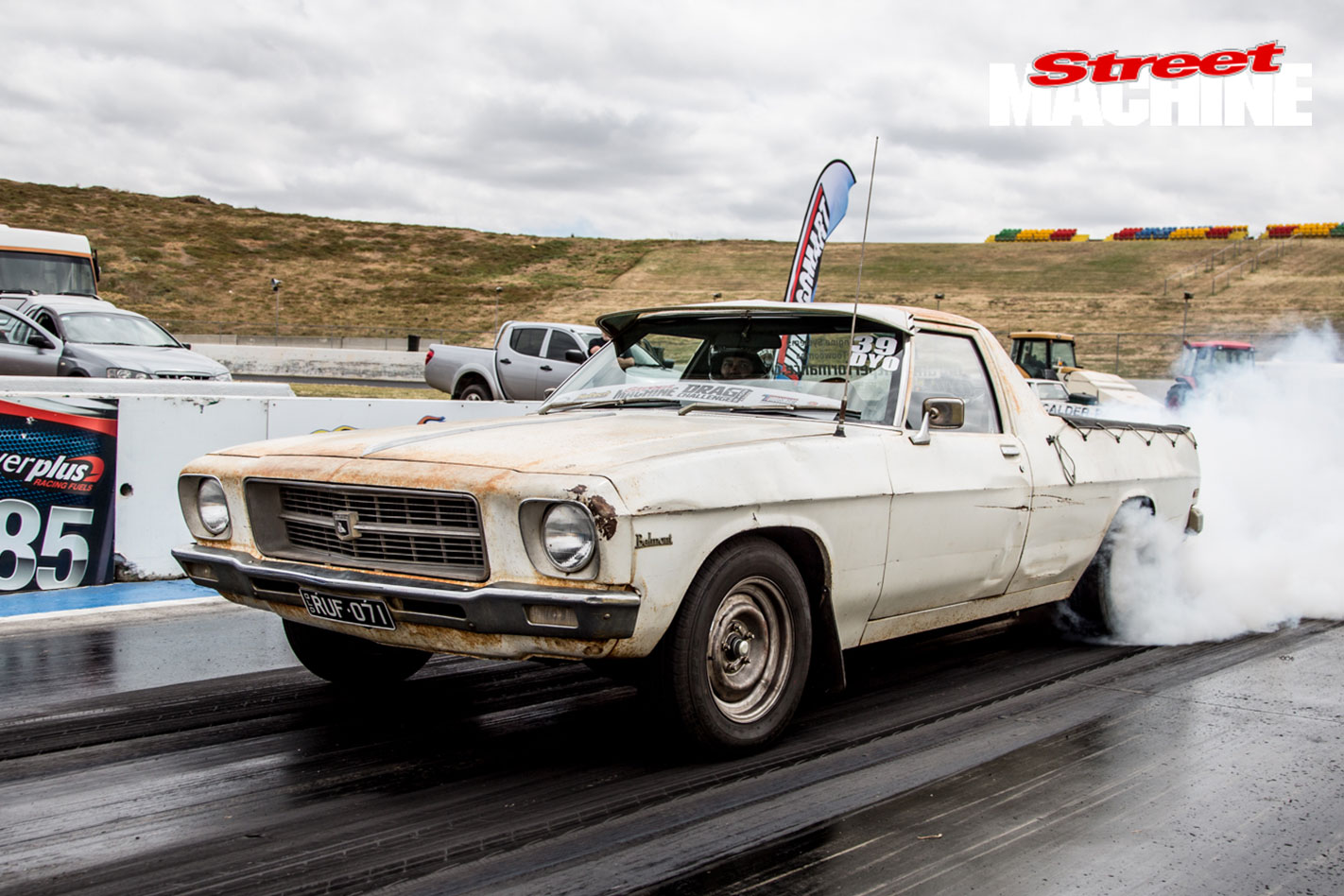 The Most Likely to Break the Internet award could go to John Di Mauro of Toowoomba and his trusty Farm Ute. 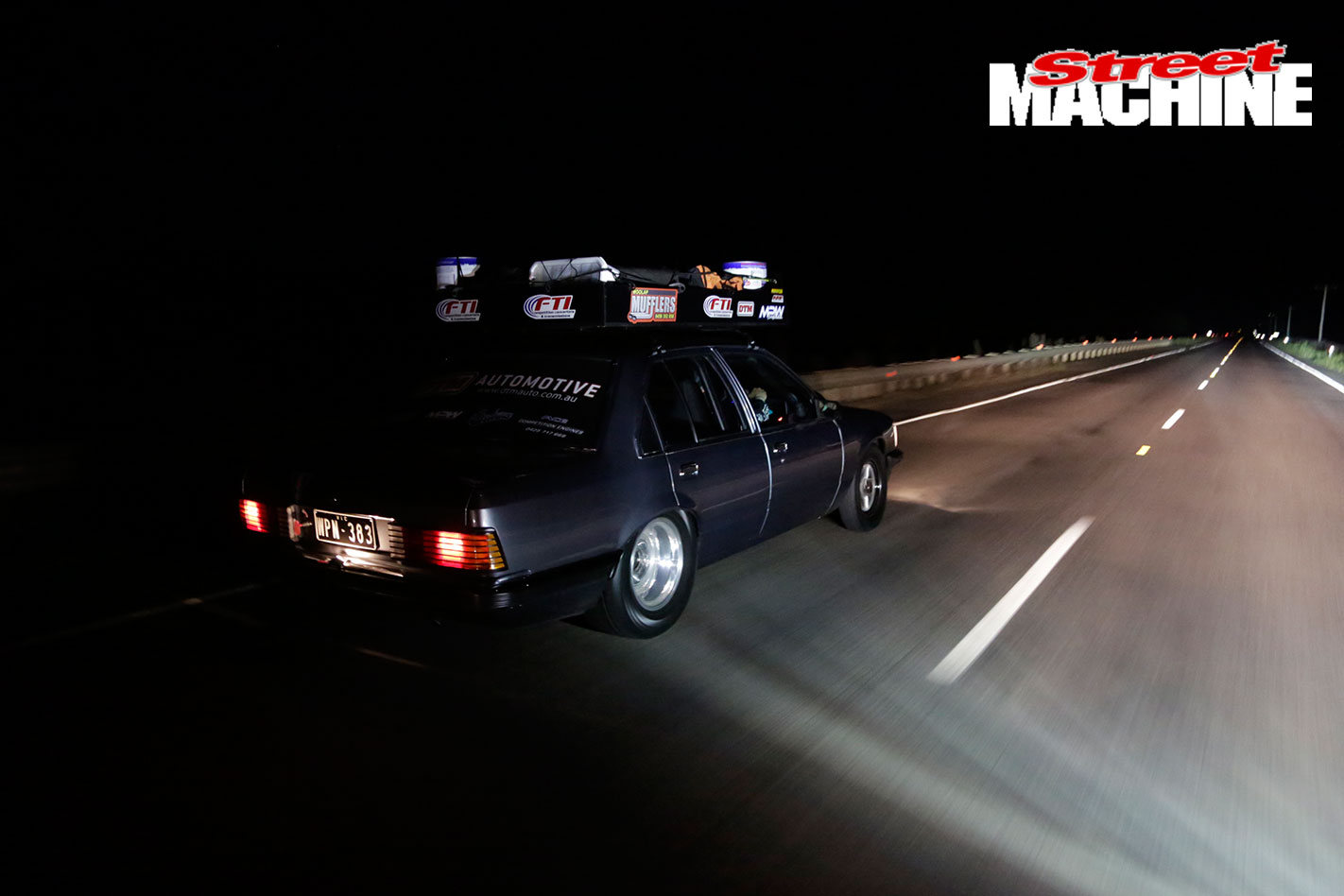 The Best Roof Rack setup gong could go to Todd Foley. He might also be in line for the (real)  Fastest Without a Trailer award. 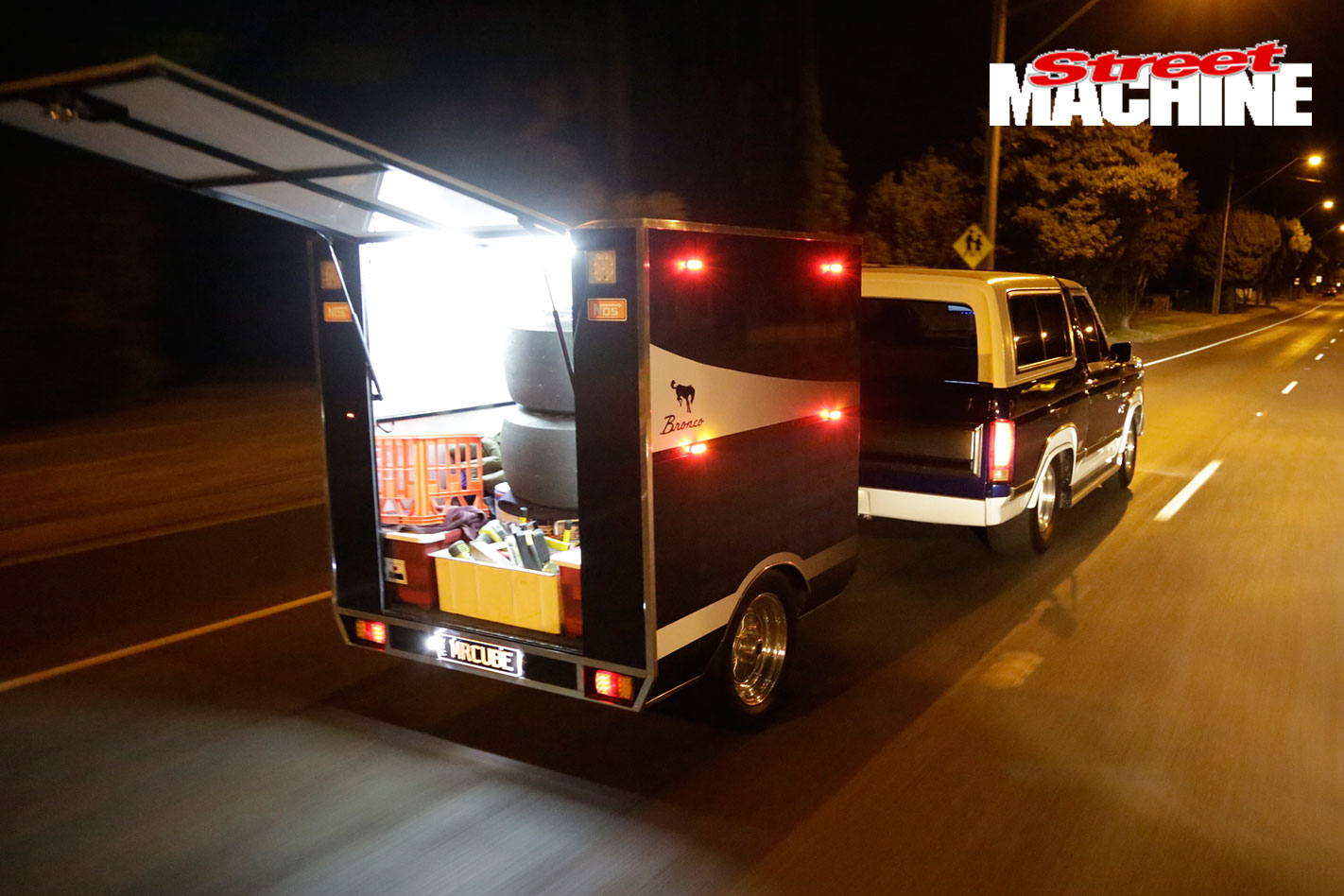 Robbie Adamo is a winner already, seeing how he pilots a wheelstanding Ford Bronco! He left his trailer door open last night on the cruise to Hamilton, just to air out his slicks. Good luck all! 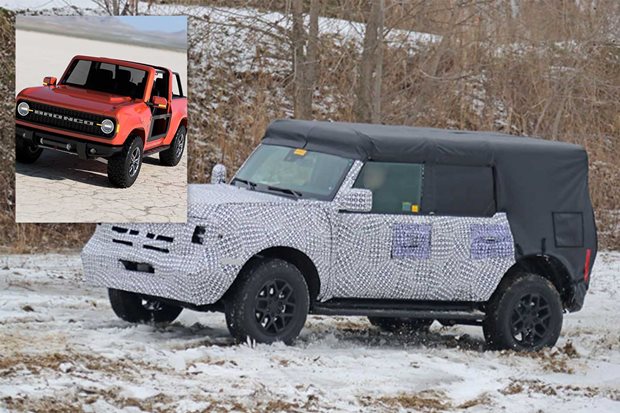 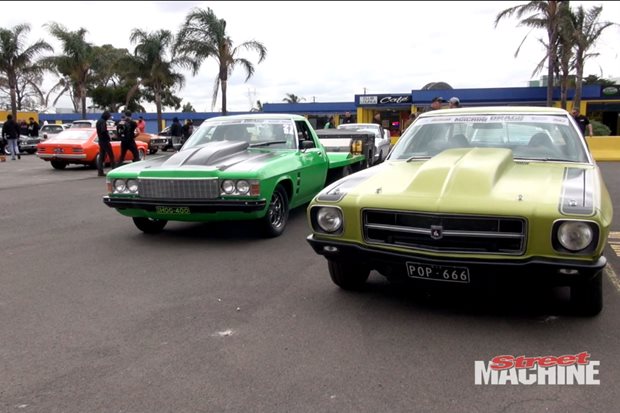 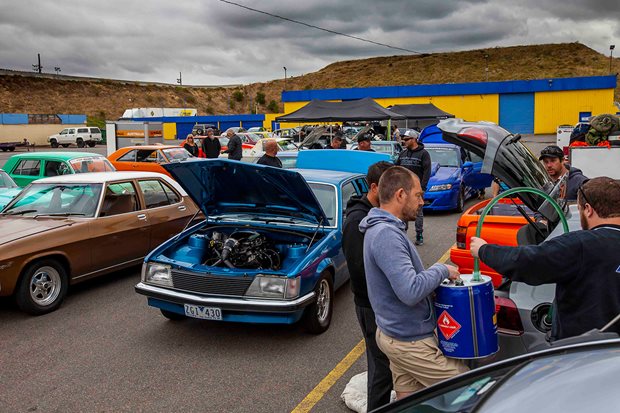 DRAG CHALLENGE: WE’RE OFF AND RACING!