Ford never sold its XH Falcons with Barra power, but Adrian Abela’s shows just how cool they can be with some turbo-fed DOHC six-pot grunt!

WHAT if Ford kept making the XH panel van and ute through to 2004, and had stuck a turbo Barra four-litre six under the bonnet? Adrian Abela’s pano answers that question, and the Victorian brought his three-seat commercial along to Drag Challenge 2018, cruising three-up and running 10s! 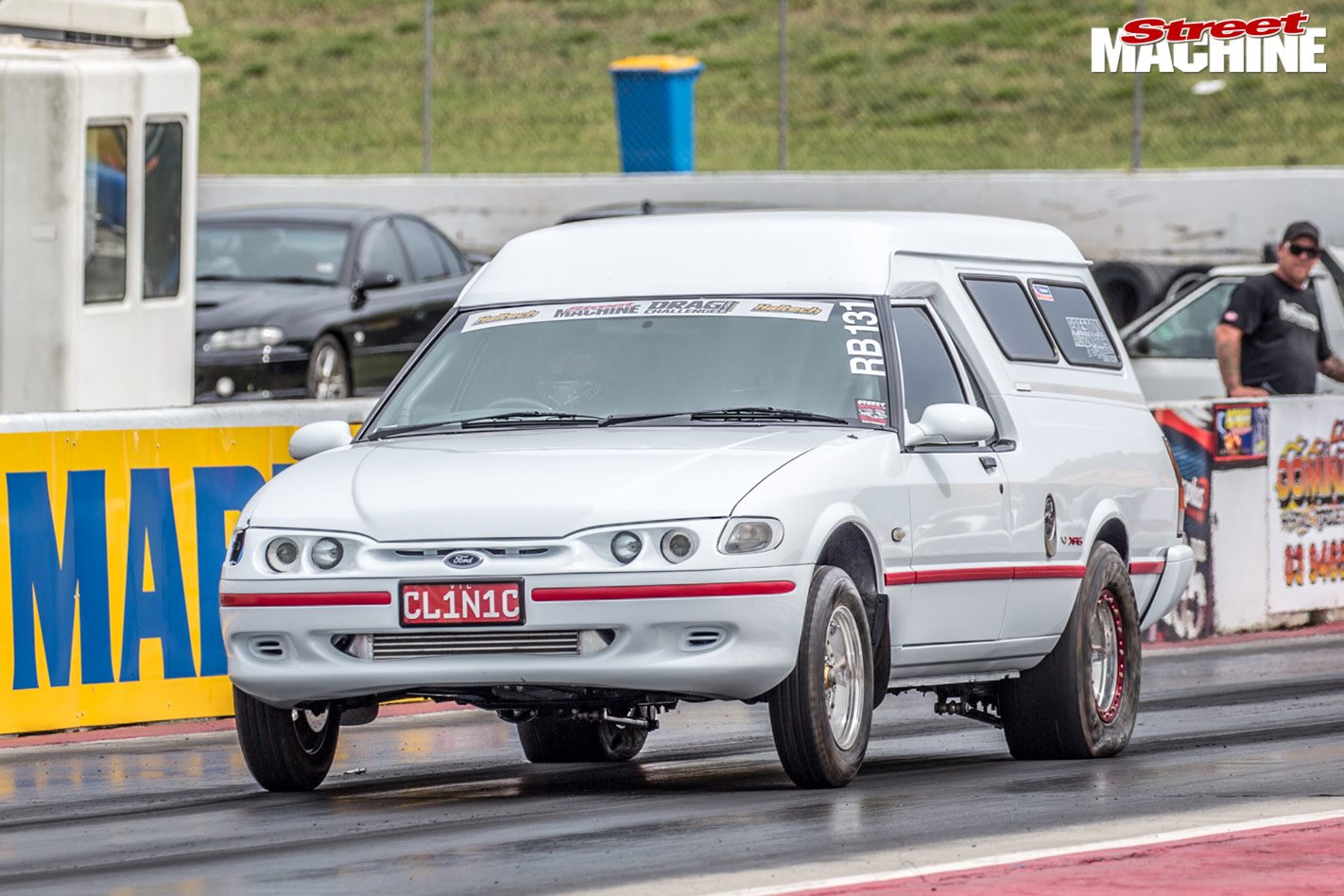 “We pulled this van out of the wreckers and eight months later it was at Drag Challenge. My 15-year-old son Josh suggested it and I thought it was a great idea,” Adrian explained. “Josh pretty much did all the spanner work to put the Barra in the car and get it working, all in our spare time, as I was too busy with work to figure out what mounts or crossmember or manifolds we needed.” 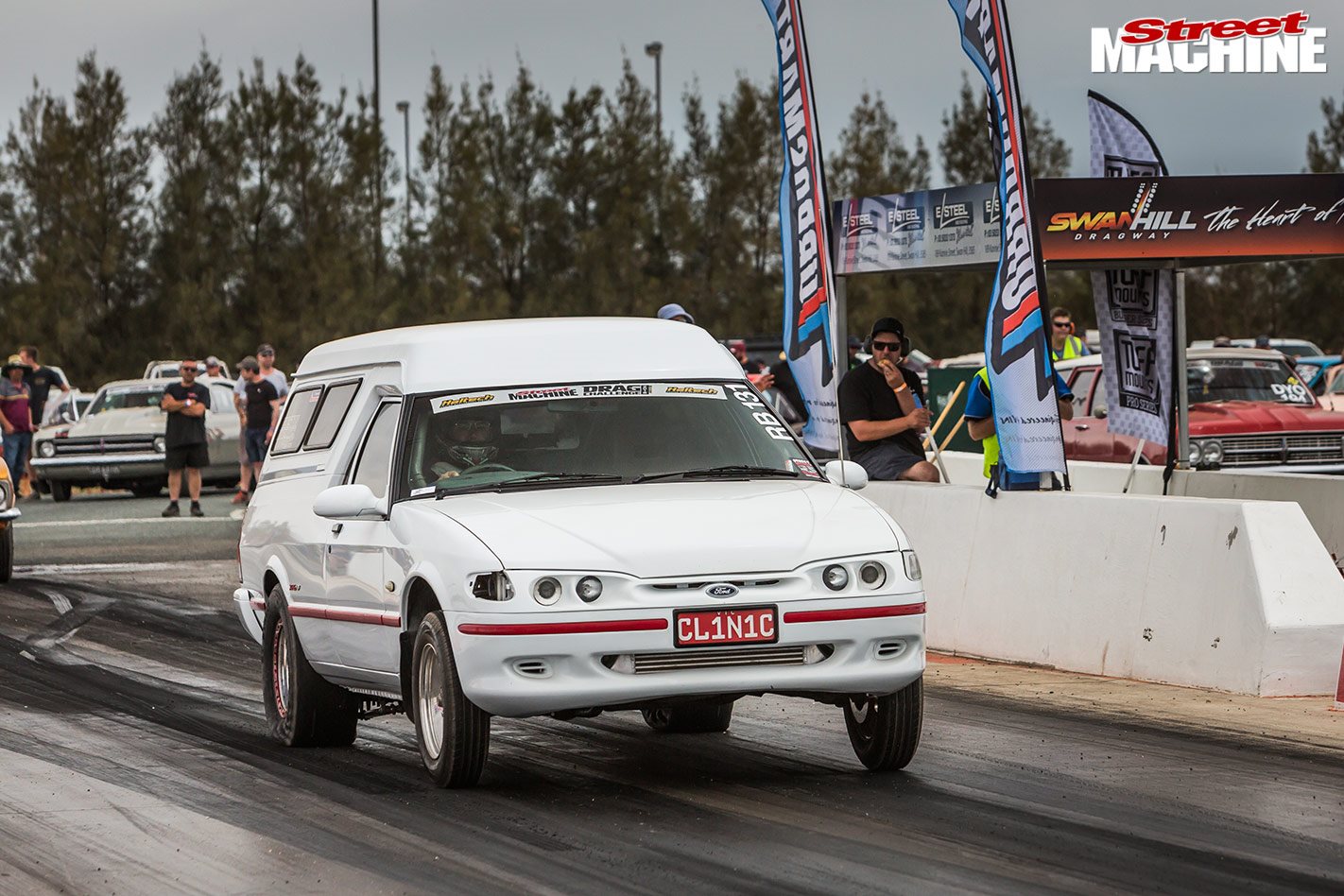 Starting life as a BA-era Barra, the four-litre six’s bottom end now runs forged and balanced internals, along with upgraded oil pump gears and timing chain. “It has all the basic stuff, including an Atomic flex-plate,” Adrian said. “It runs a GTX3582R with a billet front wheel, and we maxed out the actuator at 21psi running on E85. It has a stock computer, FG manifolds and a BTR four-speed auto.

“We wanted to run the factory gearbox and with a column auto, but the linkages are all on the opposite side. So Preston Automatics built a BTR set-up for the column on the XH.” 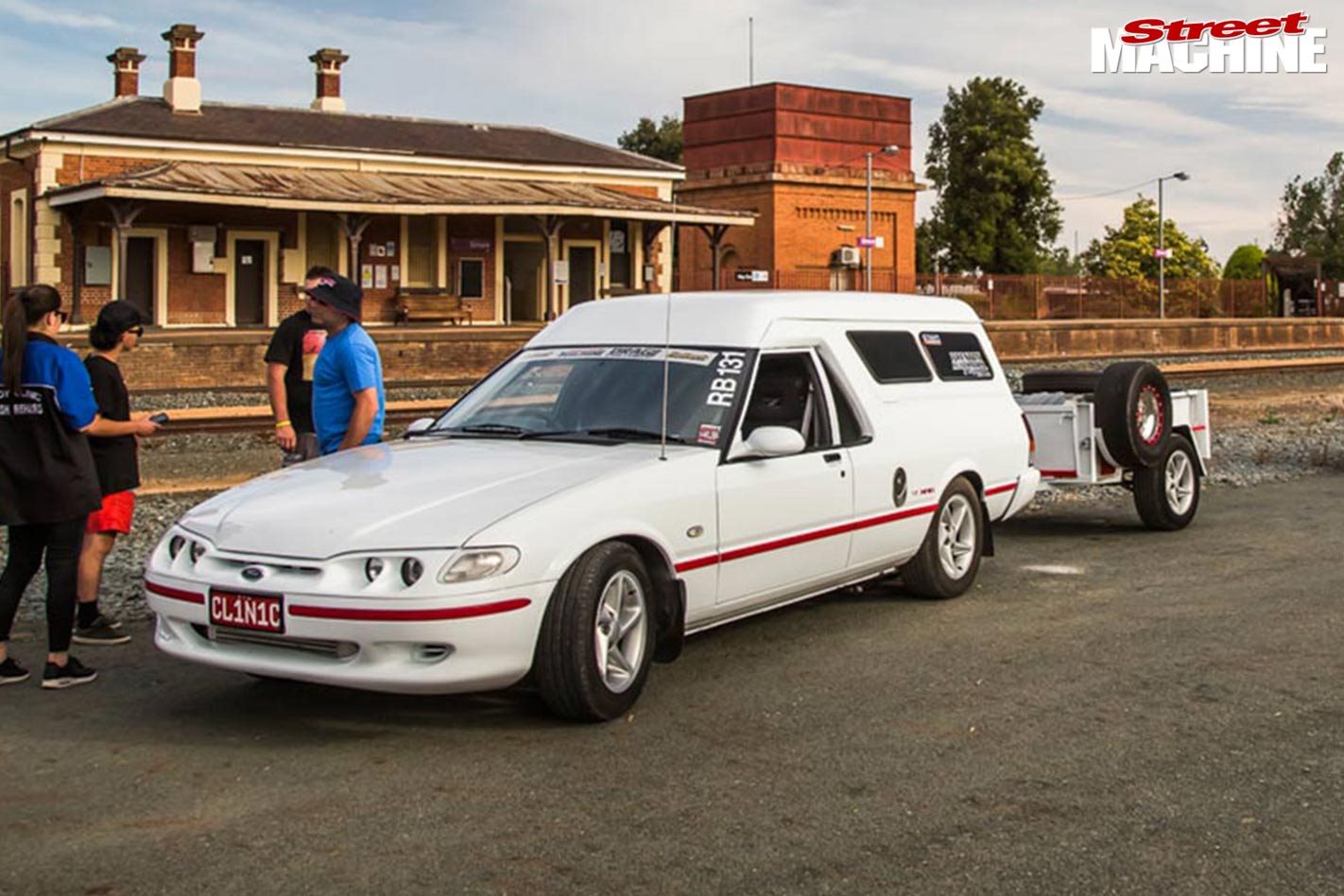 Along with the column-shifter, Adrian’s XH also rocks a bench seat, albeit trimmed with EL XR6 foam to give some extra support.

“It is a fairly standard set-up, and it has blown me away how good it goes,” Adrian said. ”Off the footbrake on the Friday at Calder it ran what equates to a 9.9 over the full quarter-mile.” 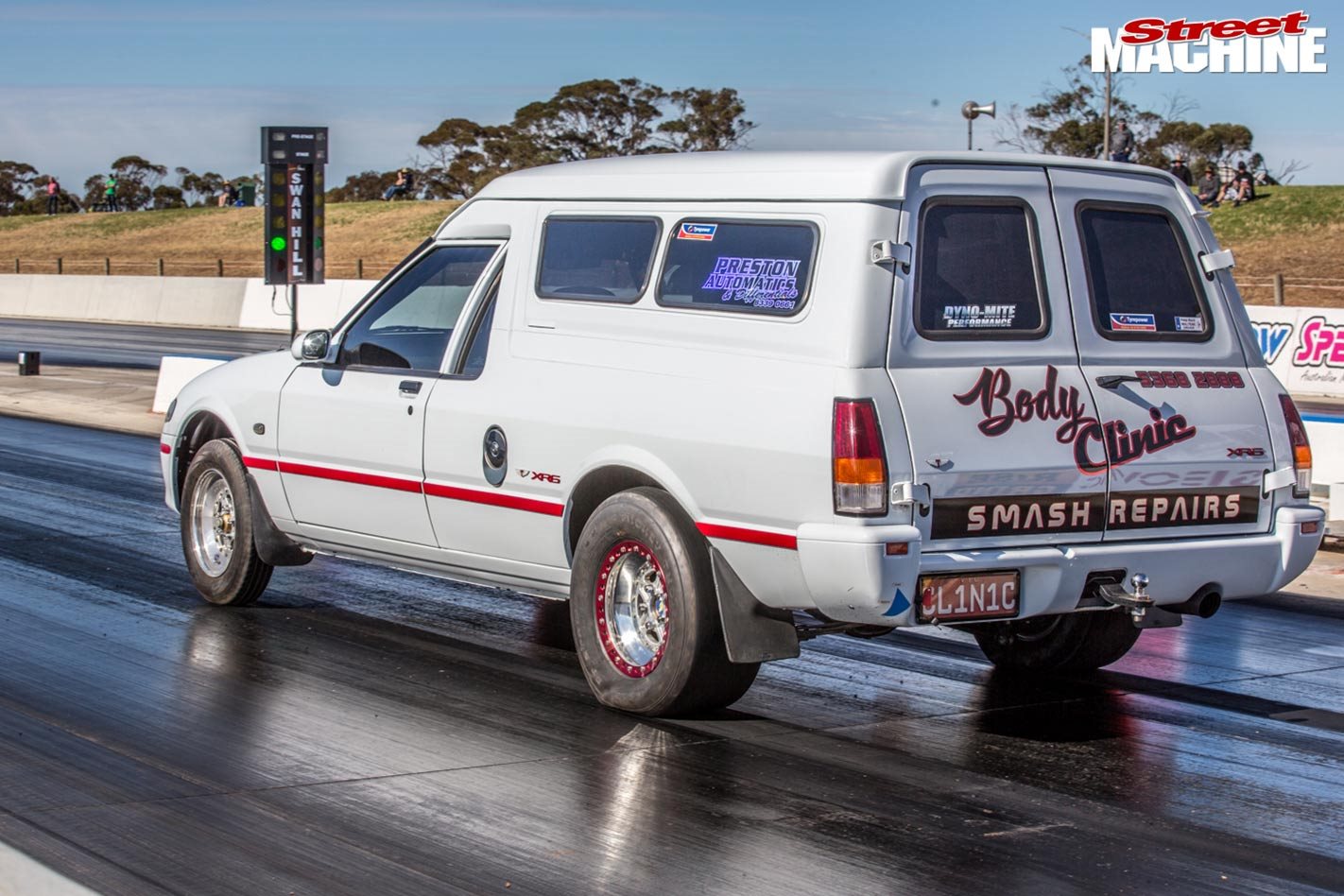 Running in the huge Haltech Radial Blown class, Adrian’s high-roof commercial certainly laid down some impressive times, with a 9.33@120mph on Day One over the 1000ft at Calder, before cruising to Swan Hill where he knocked off a 10.50@130mph on Day Two. The XH threw down a 6.98@103mph on the Mildura eighth-mile on Day Three, before trekking back to Swan Hill for Day Four and a date with a timeslip reading 10.39@129mph. Back at Calder’s 1000ft strip on the final day, Adrian managed to run an 8.33@125mph to round out his week 30th in Haltech Radial Blown thanks to a cumulative total of 45.54sec. 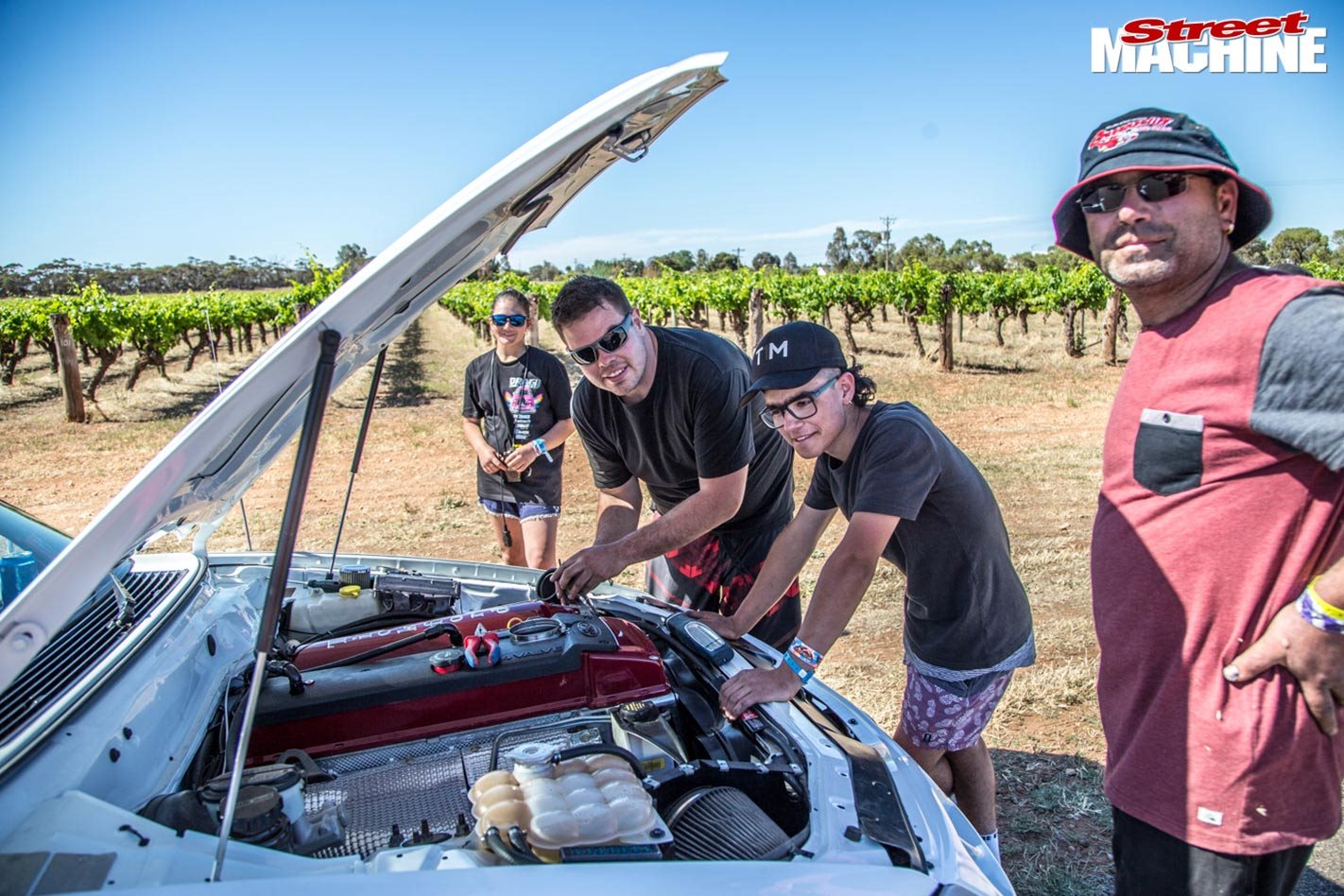 “The panel van helps us for work, as I own a wreckers, so I can throw parts in the back,” Adrian said. “During the week it is our work truck. On the freeway it was cruising at 2000rpm like a BA, and the economy was good, despite being on ethanol for Drag Challenge!

“I want to thank Josh and my daughter Natalie; Brett and Sarah; Andrew from Preston Automatics; Chris from Chris’s Differential; Adam from Tyrepower; Dion at Dyno-mite Performance, Paul Rogers; and Andy at Specialised Power Porting.” 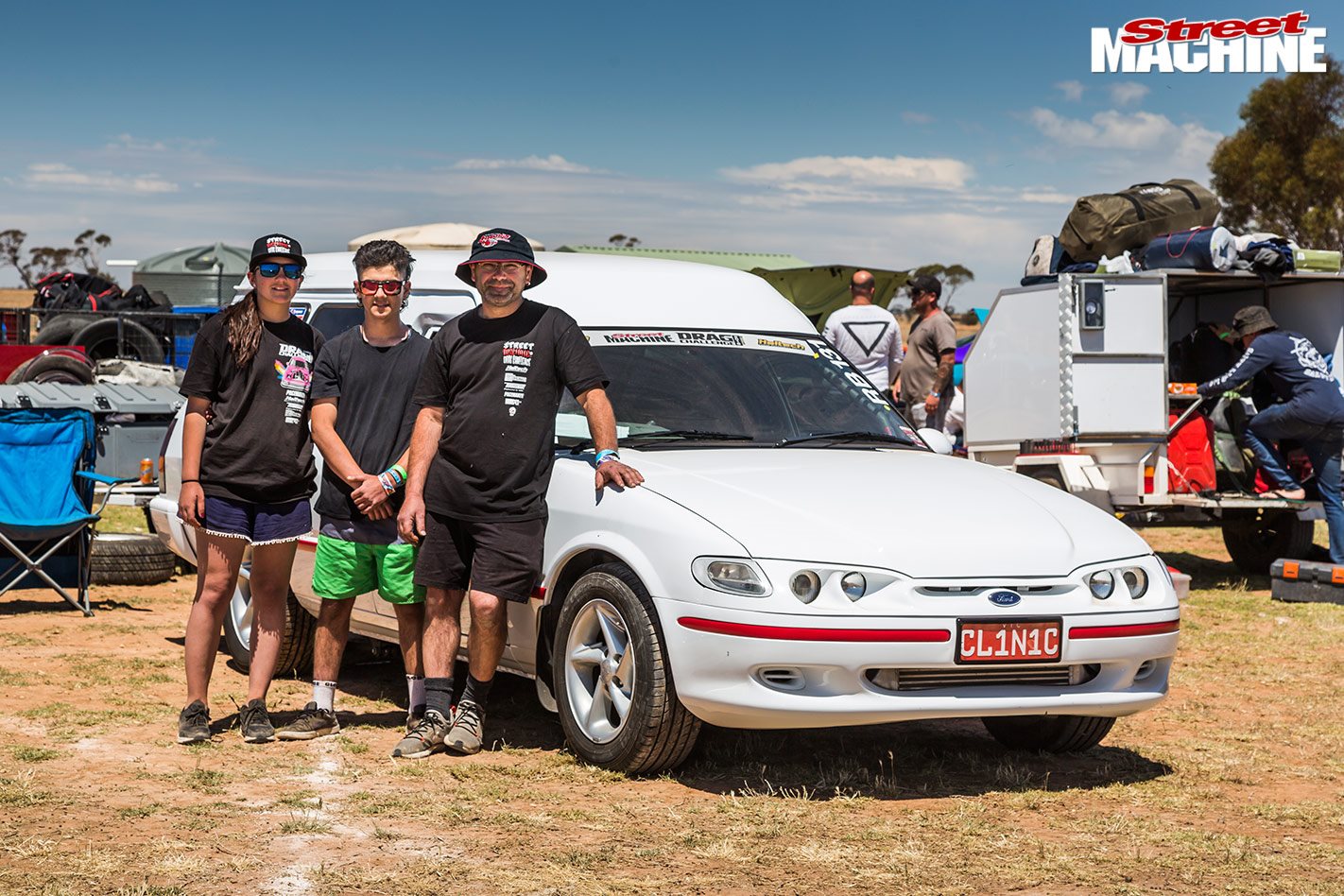