RODNEY Browitt’s green HQ Belmont farm ute was one of our favourite competitors at last year’s Street Machine Drag Challenge, finishing just outside the Top Ten overall with some stout nine-second passes. Rod brought the ute back for this year’s event with a few choice upgrades and not only managed to finish twelfth out of a field of 100 cars, but broke into the eight-second zone for the first time. 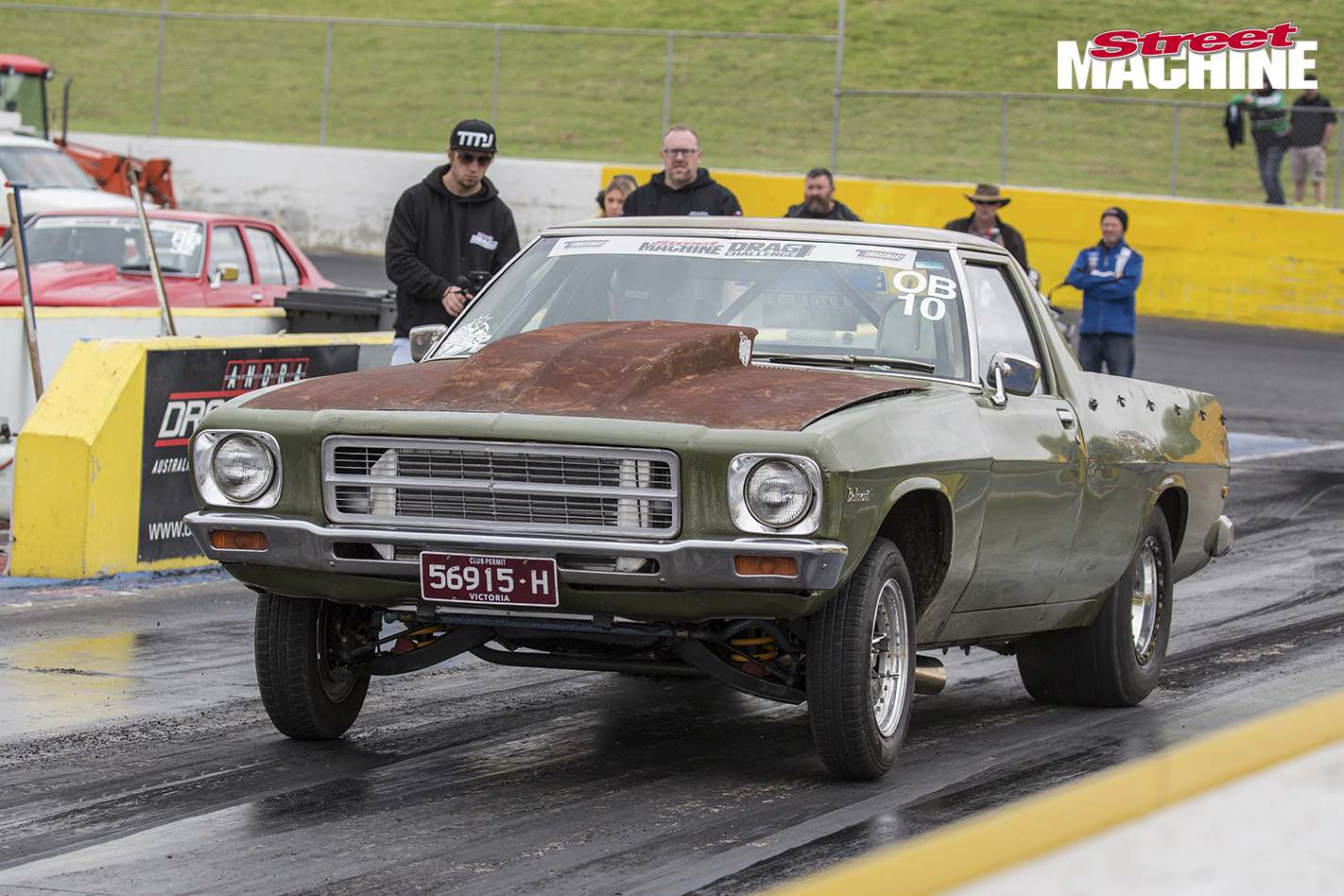 The old girl certainly had humble origins. “We bought the ute from a farmer near Lake Eildon for $700,” says Rod. “The body was pretty honest. Bugger-all rust and just a 202. We fitted plugs, points and a new dizzy cap and we were on our way. We bombed around in it for about five months, it was pretty cool!”

“The original plan was to build a burnout car,” said Rod. “That was the idea when I began doing the tubs and stuff. But then I stepped away from that and decided to build a car that could multi-task rather than something that was limited to just a burnout pad.” 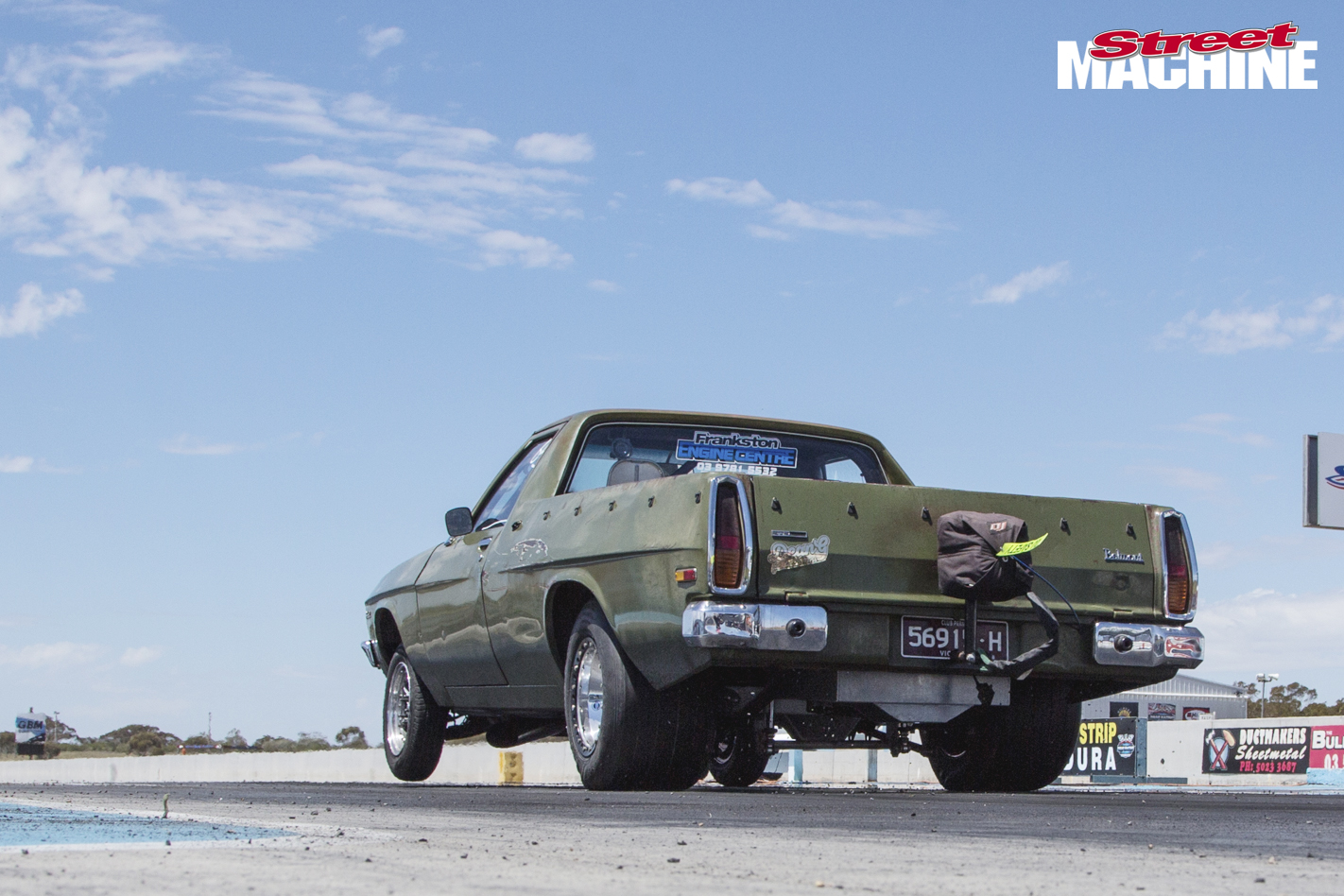 Like several other Drag Challenge participants, Rod zeroed-in on an LS transplant thanks to its stupendous scope for power without spending squillions.  “They’re great!” enthused Rod. “From the factory, they’re full of all the bits that you’d buy to make a Holden motor go fast!

The first engine was bought from a bloke off Gumtree and was installed in the HQ with a Moroso sump and a set of Tuff Mounts. Behind it was a TH400 three-speed on a standard-spec cross-member. “Since we ditched the 202, it’s always been a turbo LS, but it’s had a few engines in it,” Rod continued. “We’ve bent a few rods and lunched an engine at the start-line at Heathcote. That’s when we went to a LQ9 truck block.” 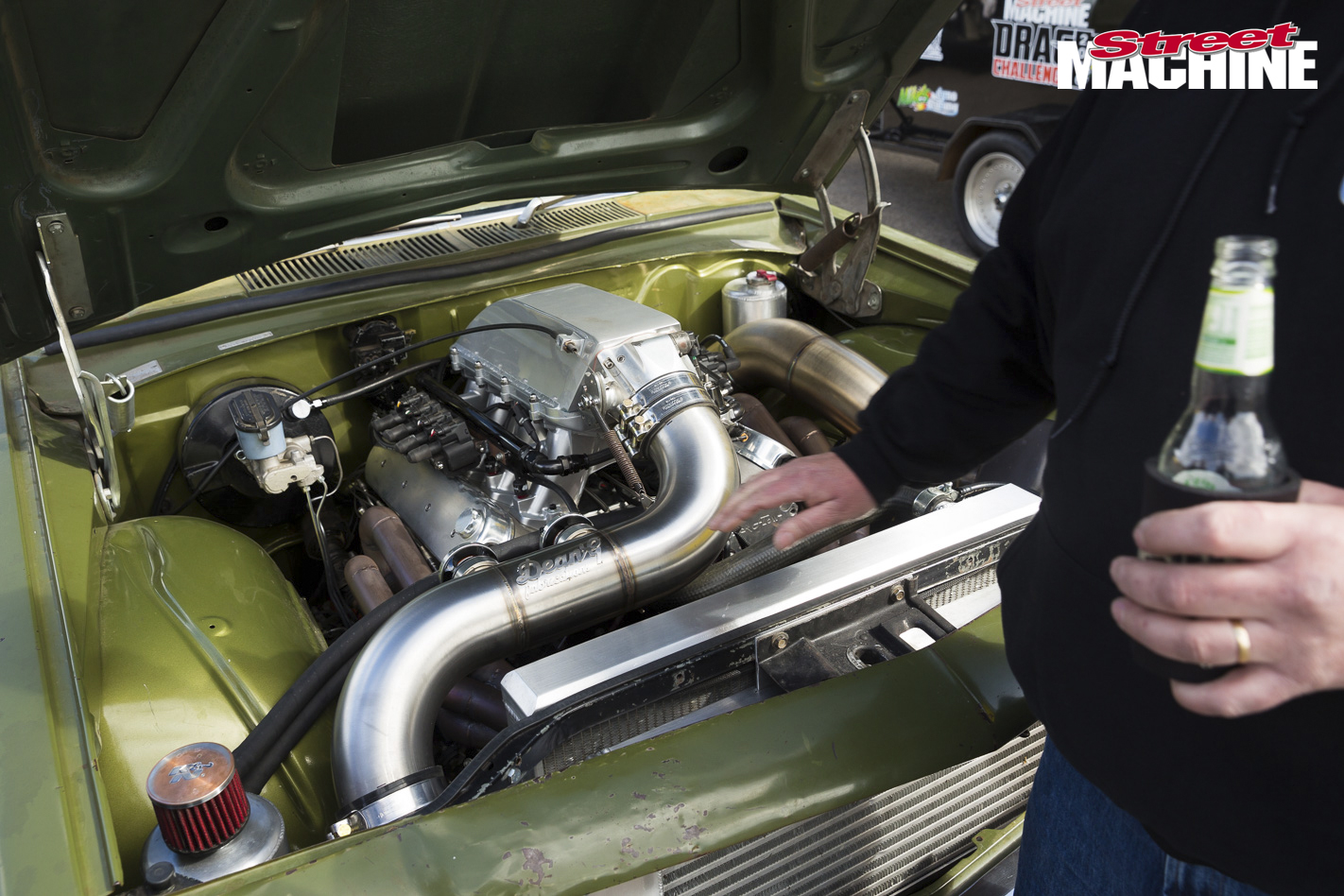 The current 370ci mill wears Trick Flow heads and was screwed together by Dave at Frankson Engine Centre. The 80mm Borg Warner S400 turbo was supplied and specced by Lil John’s Motorsports in the US.

The intake is a Holley Hi-Ram manifold, with a custom plenum on top. “The turbo pipes were fabricated by Dean Gianginis,” says Rod. “The manifolds I had on the car last year cracked on the dyno two weeks before the event, so I have to thank Dean for coming through for me. He also helped me take the car to the next level with the suspension and bar work.” 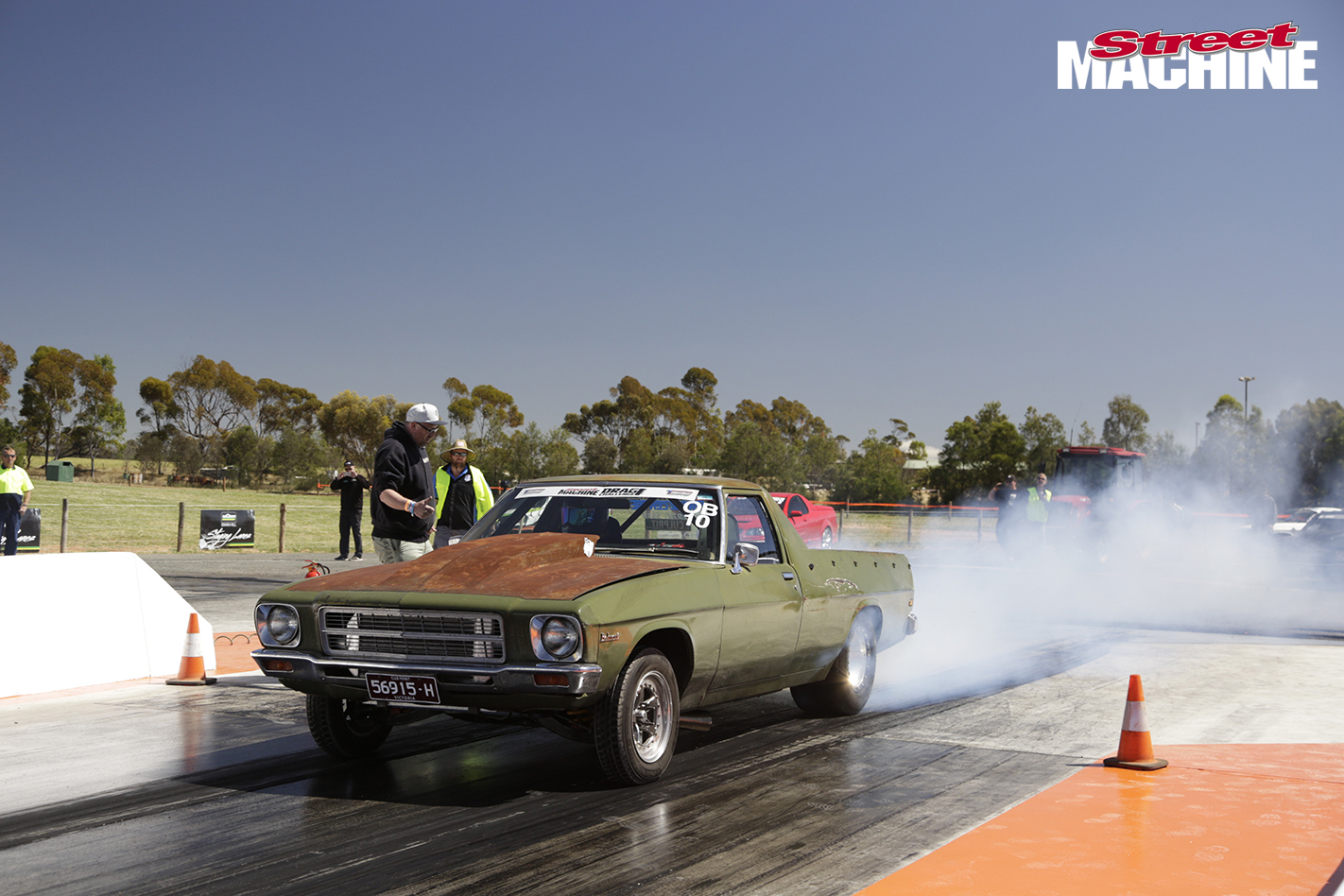 With Michael Kalaitzakis driving the Haltech Elite 2500, the ute has stomped out 1030hp at the treads, with a redline of 7300rpm!

Last year’s Drag Challenge was Rodney’s first and he learned a lot: “I learned that U-bolts can come loose!” he says, with a distinctive laugh of someone who has learned stuff the hard way. The result was a bent axle housing. Ouch! 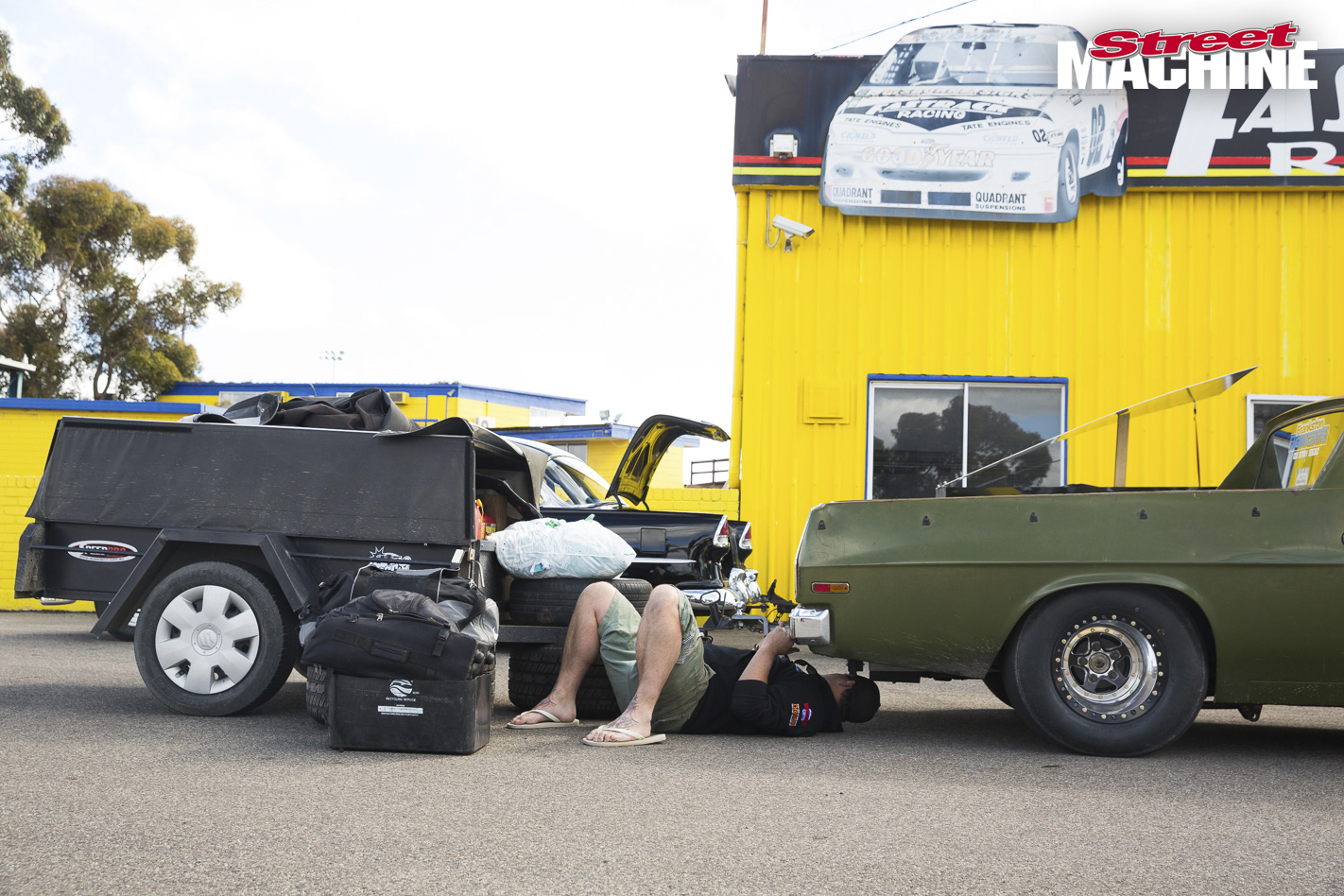 For this year, Rodney arrived with a gorgeous Pro9 sheet-metal nine-inch. It’s located by Gazzard Brothers split mono leaves and a set of Caltracs. The carbon-fibre tail-shaft is $2K well-spent, reckons Rod. “They’re quite a long wheelbase so if you start turning them hard, the tail-shaft can get the skipping-rope effect,” he explained. “I had a mate with a tonner break a one perfectly in half on the dyno. That was enough encouragement for me to go carbon-fibre one.” 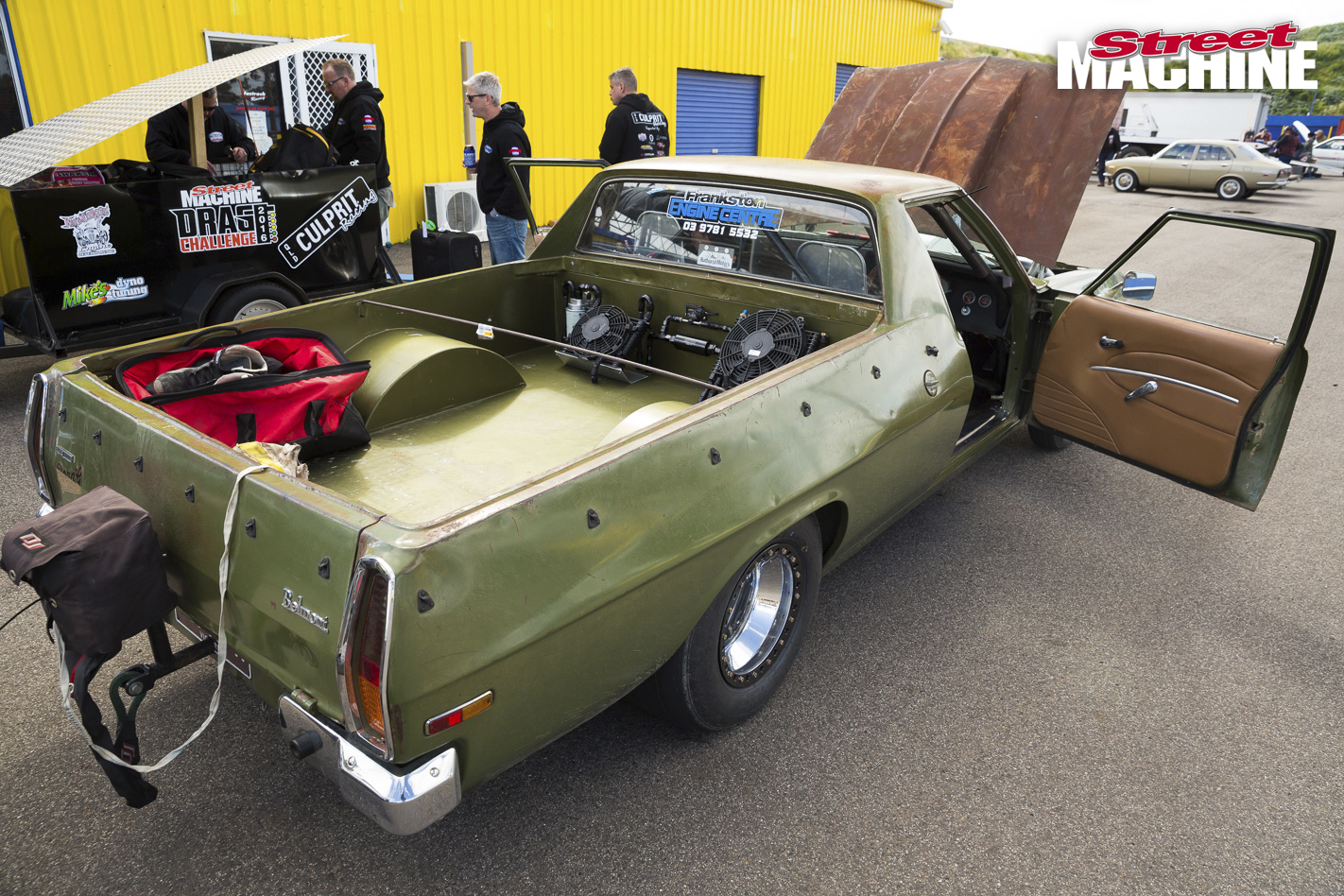 This year’s Drag Challenge wasn’t without a few dramas, either. Driving to Mildura on Tuesday evening, Rod noticed one headlight wasn’t working: without its filter, the turbo had sucked-in the headlight wiring harness during the runs at Heathcote, damaging the compressor wheel. The next day, the car was down on power and the best Rodney had seen all week was 9.20s. 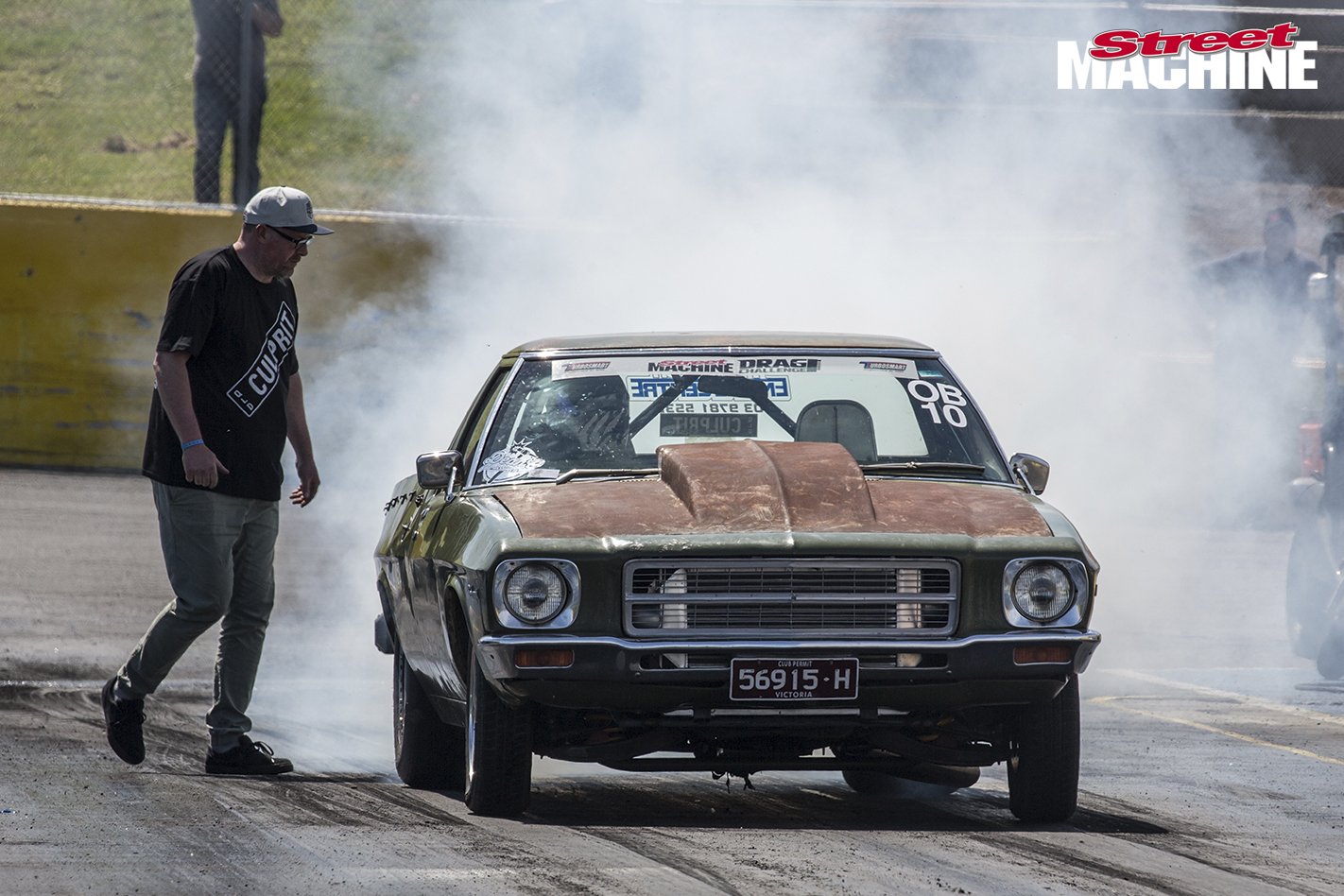 “I was facing the decision to keep going or to pull out of the event,” said Rod. “Instead, we soldiered on and found out that we had a broken wastegate fitting as well. We fixed that and at the last night at Calder we ran an 8.87 and then and 8.803 at 153mph! We finished twelfth overall and fifth in Turbosmart Outlaw Blown, so I was pretty happy with that considering the damage to the turbo. I just wish we’d found the boost leak earlier on, it would have been ace to place in the Top Ten. Can’t wait for next year!”