I’VE always had a bit of a soft spot for the XE ESP Falcons; my first WAR car – WAR351 – was an XE ESP, after all. So when we spotted this monster XE, owned by Queenslander Fabian Huff, on the Street Machine Drag Challenge Weekend entry list we had to find out more.

Fabian has surrounded himself with some great help and transformed this former 302/auto combination into a 1200rwhp killer aimed squarely at the seven-second zone on 275 radials. 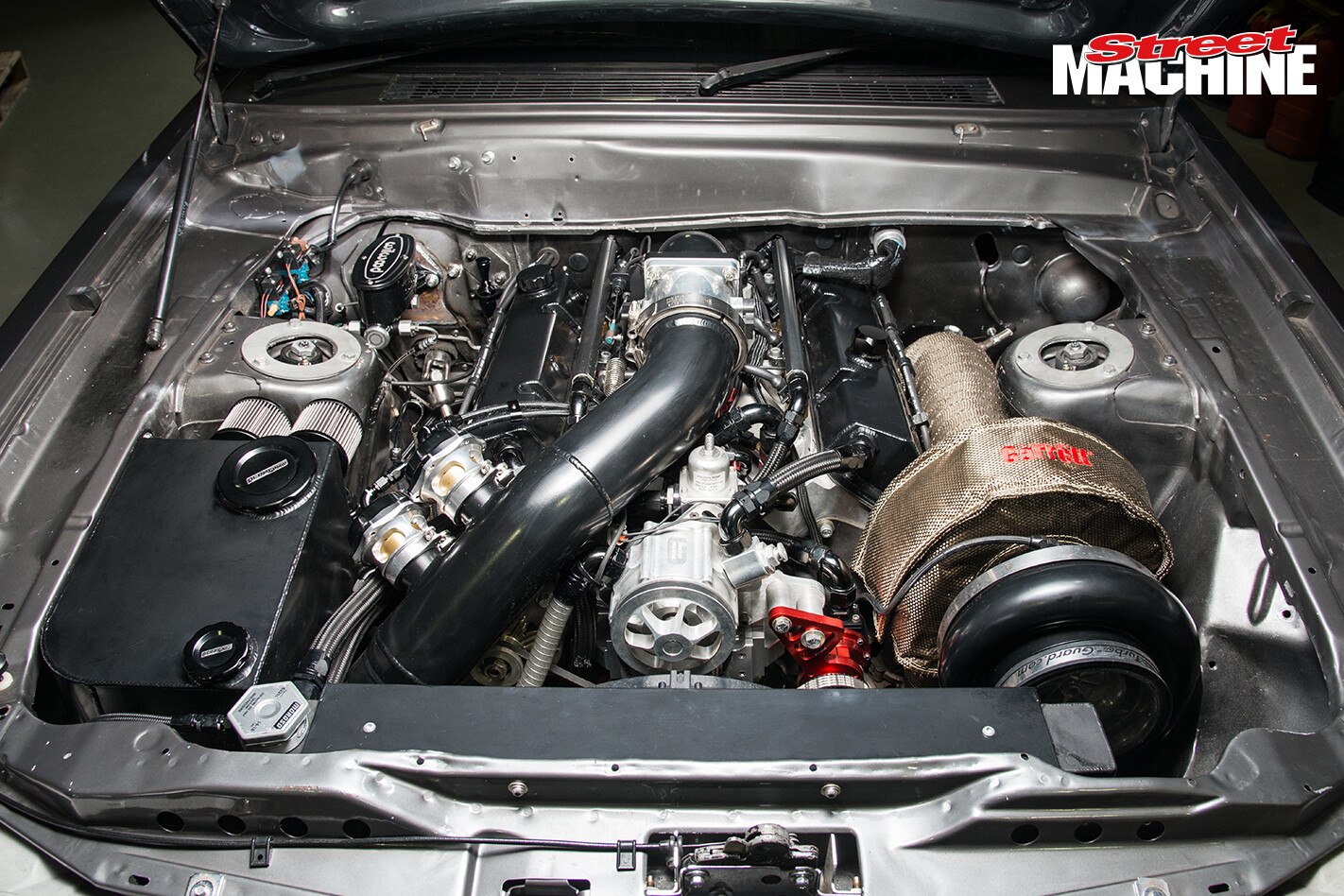 The car came from Fabian’s stepfather, and was pretty cherry when he got his hands on it. It’s had a number of different combinations, the most recent being a 383ci 4V-headed stroker that ran 10s. But this latest transformation has taken six years, with the goal of making the XE a seven-second street car, so there was plenty to do.

Much of the work has been performed by Kyle Hopf from 6boost, with Terry Seng from Paramount Performance also playing a prominent role, and Robby Abbott from Abbott Engine Reconditioning and Stuart Henry providing other pieces of the puzzle. 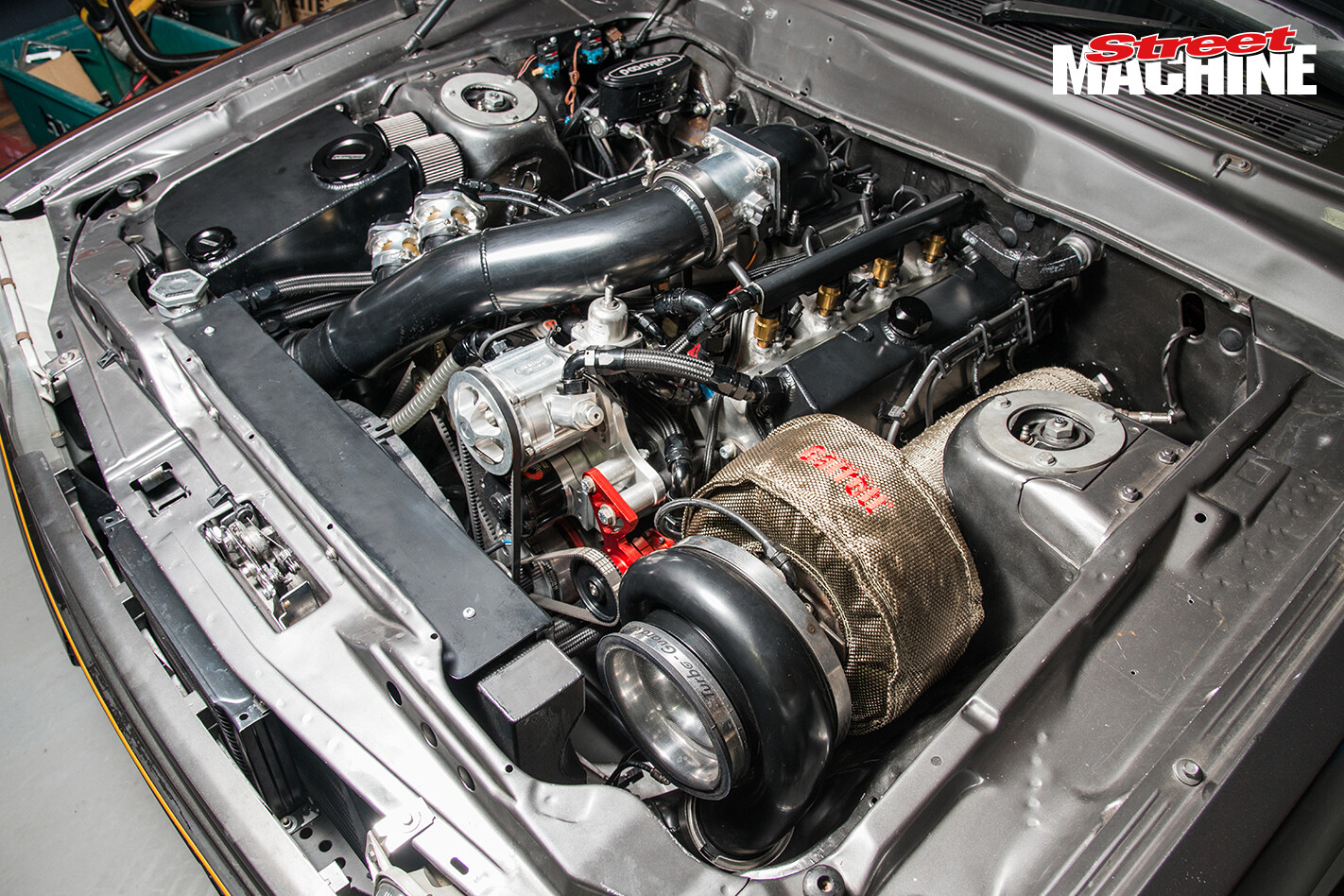 The engine used to run in Stu’s infamous black Ford Capri, but after a night at the drags, Kyle convinced Fabian that this was the package for him. The 420ci motor offered all the goods with a Dart block, Scat crank with Eagle H-beam rods, CP pistons and topped with a set of 3V alloy heads, ported by the captain of the Australian drinking team at Hot Rod Drag Week, Robby Abbott. The package was machined by Robby and assembled by Stuart.

It’s a wet-sump deal with four-into-one headers by 6boost and an 82mm turbo (275-legal) that is maxed-out. Two 50mm Racegates are plumbed in on the hot side, with a generous bar-and-plate intercooler by Matt Rogan feeding a CHI inlet manifold with 16 injectors – eight Bosch 2000cc primaries with 2300cc Moran secondaries. While the Bosch injectors are enough to feed the motor on E85, the second set will come into play if and when the conversion to alcohol is made. 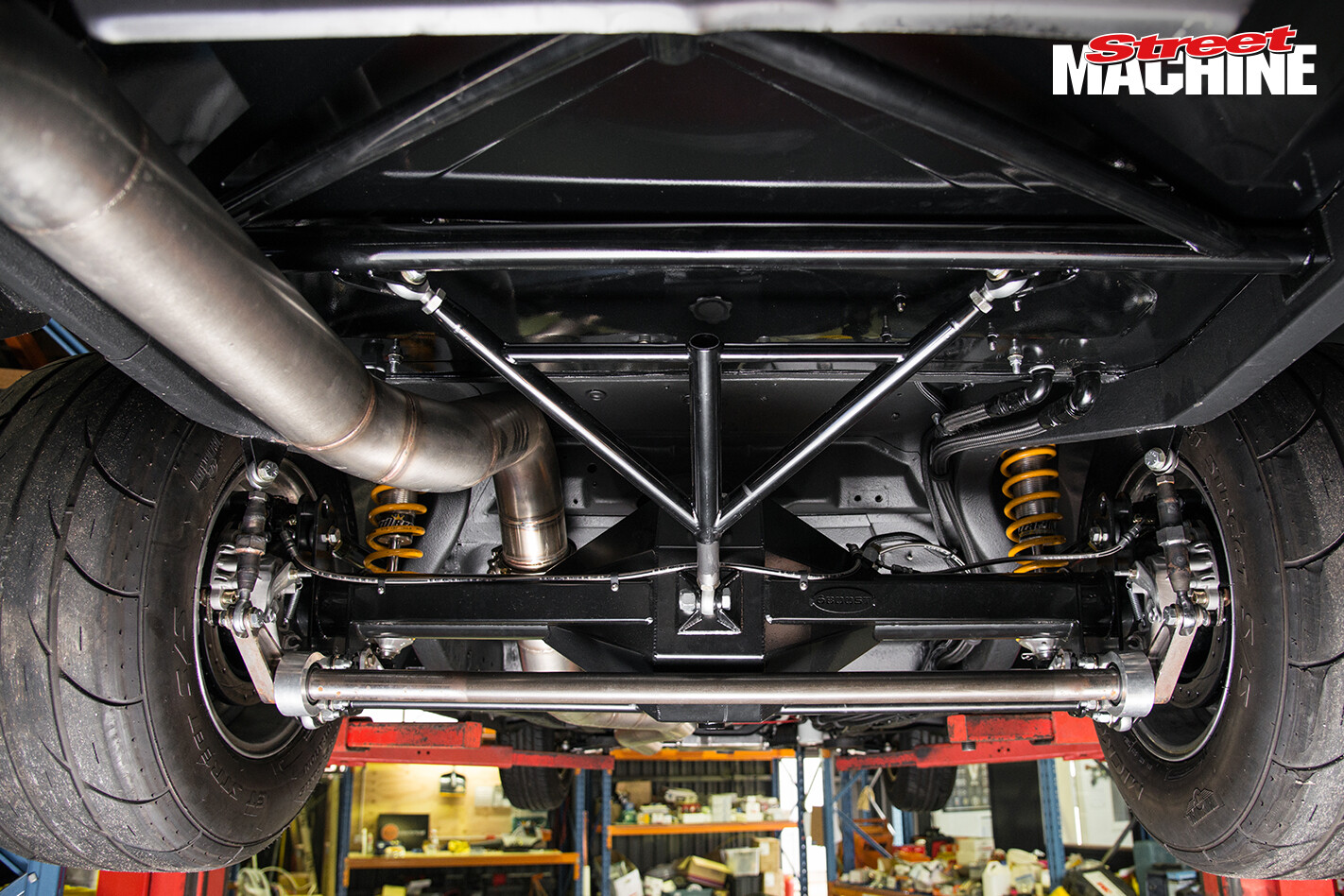 To feed the engine, a belt-driven Waterman pump runs off the front of the motor, fed by a custom rear tank, and it is also T-pieced to an Aeromotive EFI pump that is used to prime the motor. A Weldon rising-rate regulator handles fuel pressure, while a System 1 filter keeps the junk out of the injectors. The engine is controlled by a Holley ECU with Holley smart coils on the ignition side. 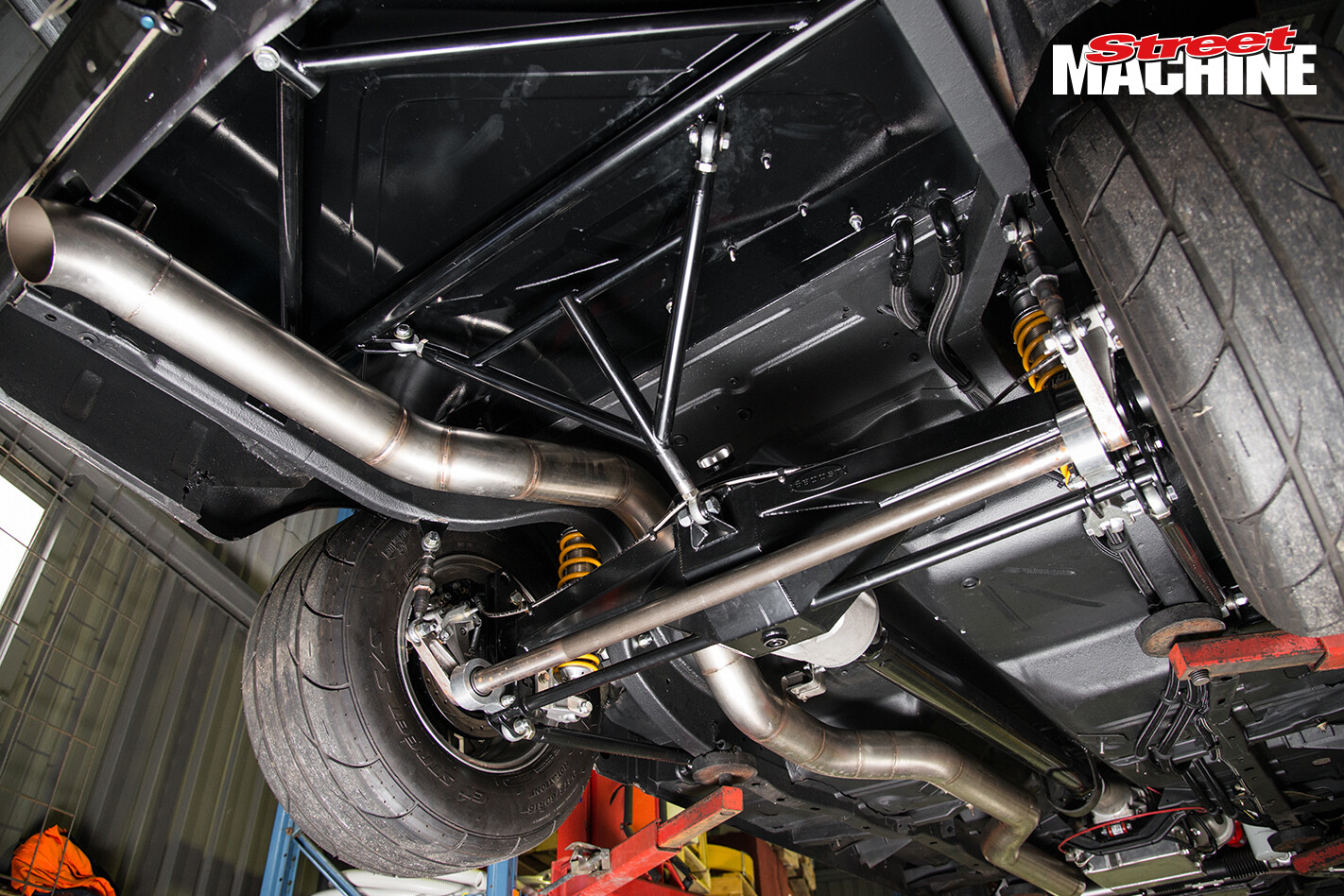 As with most EFI deals, there was a bunch of wiring required that Fabian and Terry took care of, and Fabian also re-pinned the MoTeC wiring loom that came with the motor to make it Holley-compatible.

To get the mill fitted with the existing hot-side plumbing, Fabian had to notch the towers and go to a strut front end with rack-and-pinion steering. 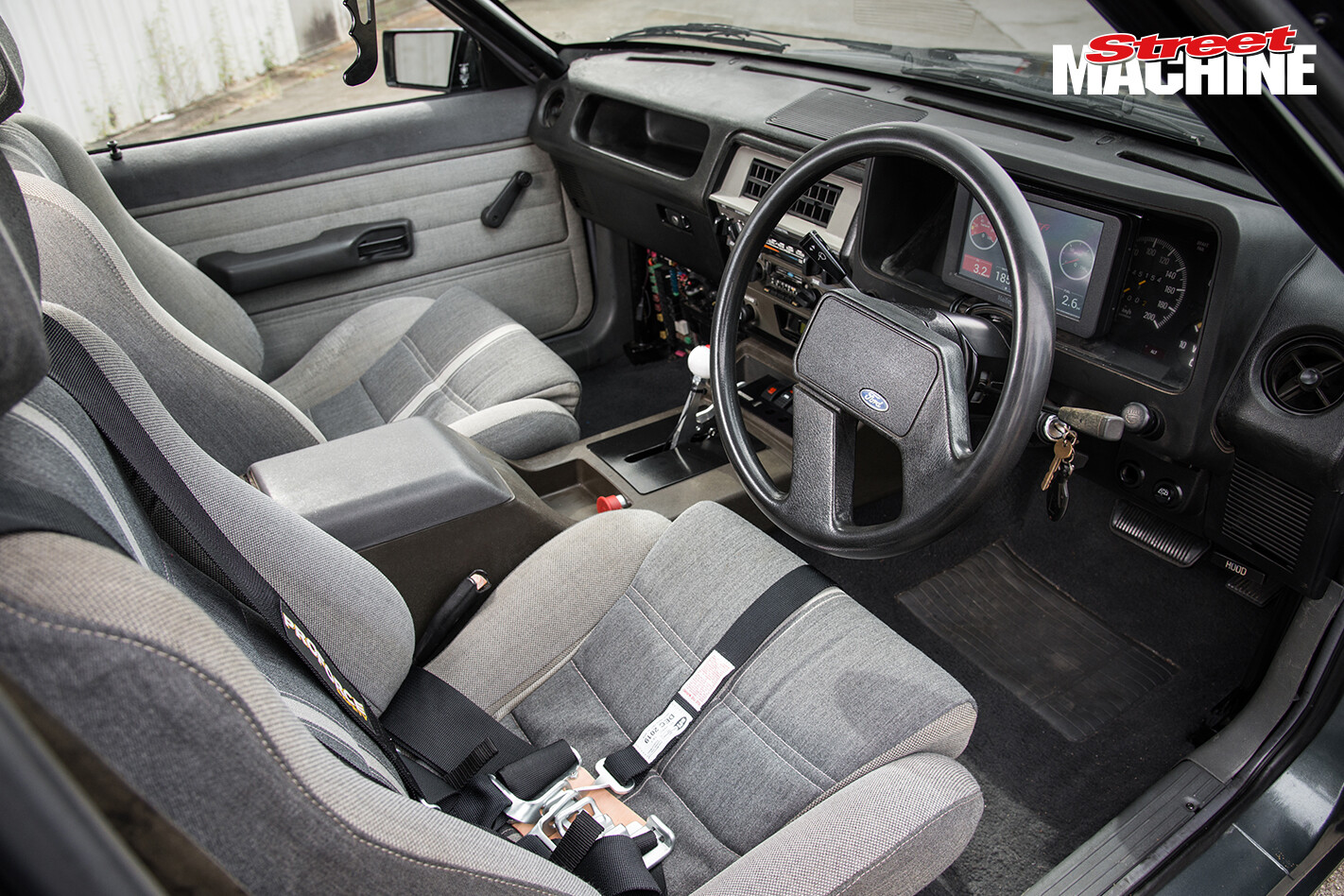 Backing up the mill is a USA-built Keith Neal two-speed Powerglide with a ProTorque converter. The whole rear end has been overhauled by 6boost, with a chrome-moly sheet-metal nine-inch rear housing fitted with 40-spline axles and a floater kit. The centre section is a Strange bolt-through, with 3.2:1 pro gears swinging 275 radials. Fabian is pretty comfortable in shooting for the seven-second barrier. “I wanted to own a seven-second street car and this is what I have built,” he says matter-of-factly. “From here we just need to run the numbers, and I want to get straight into it at Street Machine Drag Challenge Weekend. But first we are going to pull the engine and get Robby to fit a Torrington bearing on the thrust side of the crank for good measure. The clock is certainly ticking, but we will get it done.” 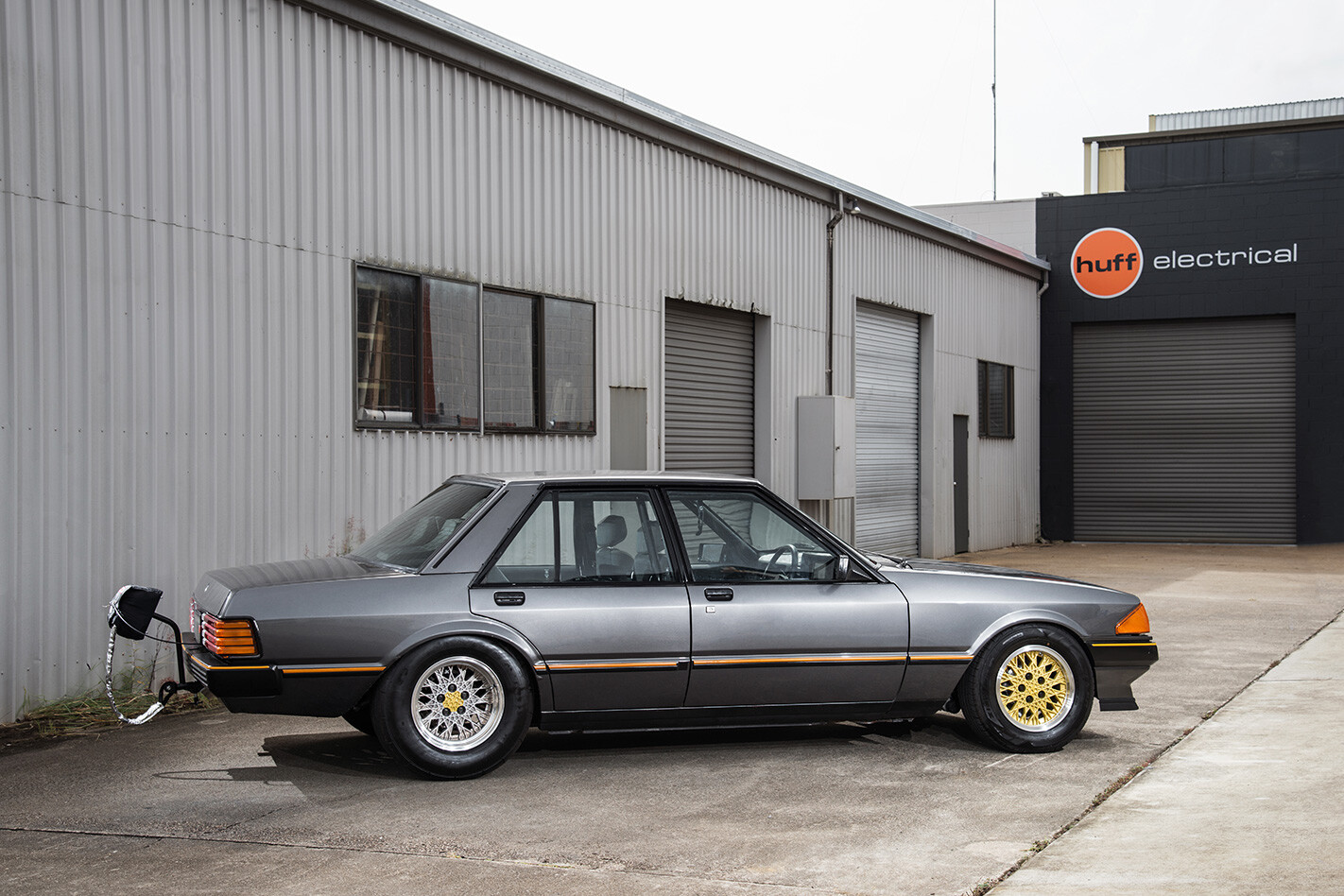