With two blokes and no trailer, space was limited. In fact, the two good mates were travelling so light – and the interior of the ’32 was so tight – that Rod reckoned he had to wear Norm’s helmet during the transit stages. They didn’t bother taking much more than the flannos they were wearing, and they were joking about having to turn their undies inside-out mid-week. 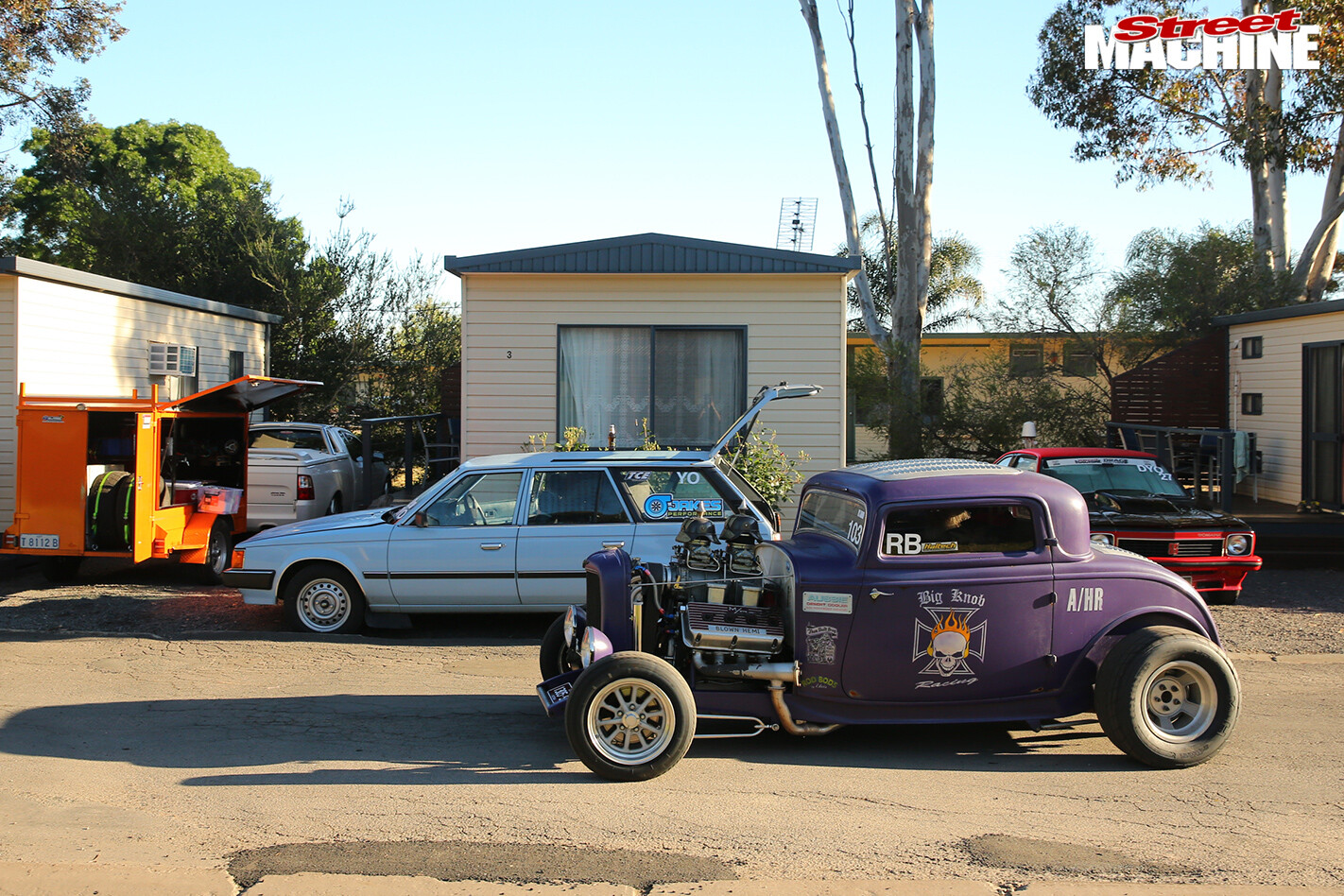 In Drag Challenge competition, Norm was running his ’32 in Haltech Radial Blown straight off the street (without even changing to track tyres) and didn’t even bother unpacking the boot – full of spares and tools – or opening the sidepipes of the ’32. 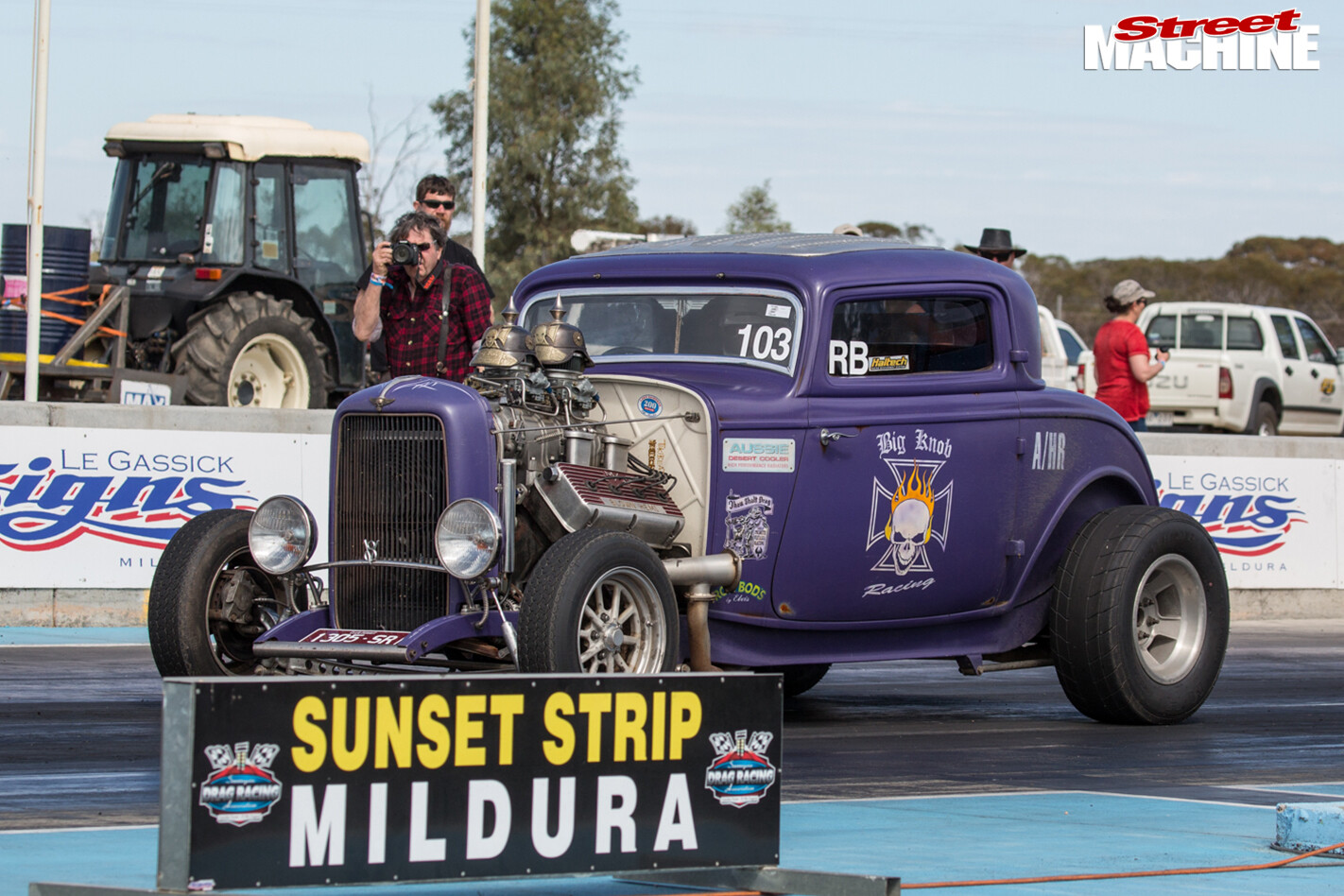 At Calder Park, the ’32 completed three runs with Norm handing in a 12.1@110mph timecard. At Heathcote, Norm ran two passes for a 12.2. He explained that by leaving the sidepipes on, he was ensuring consistency on the different tracks. That’s the voice of experience.

“Nothing’s going wrong!” Norm grinned after a 7.6@93.3mph run at Mildura’s eighth-mile strip on Day Three. Thankfully, that’s how the week continued with the wild-looking ’32. “It gets used,” Norm said of his Ford, which was built eight or nine years ago. “It’s been to Tasmania twice and up to Sydney and to the Wintersun event in Queensland and South Australia and all around the place. We cruise it along at 95km/h; that way we can get two hours out of it before we need more fuel and a little rest – it’s a bit noisy inside! 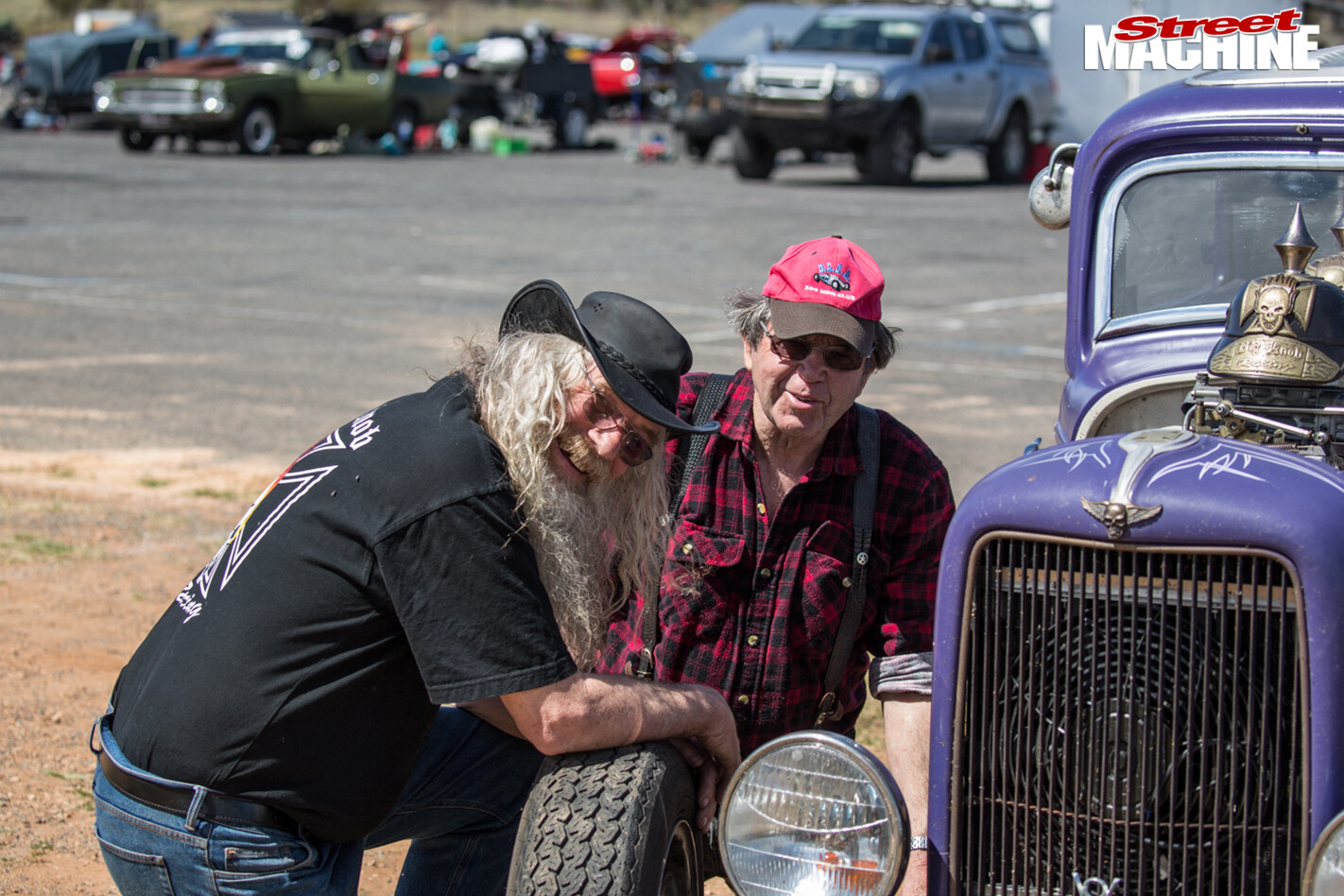 “When I first built it, it had 685 horses at the treads – but it was just about undriveable. We changed pulleys and now it’s a lot tamer, it doesn’t change lanes when it changes gears!”

Norm must have emptied the boot for his last Calder Park run on Day Five, as the rod laid down an 11.7@116mph at the finish. 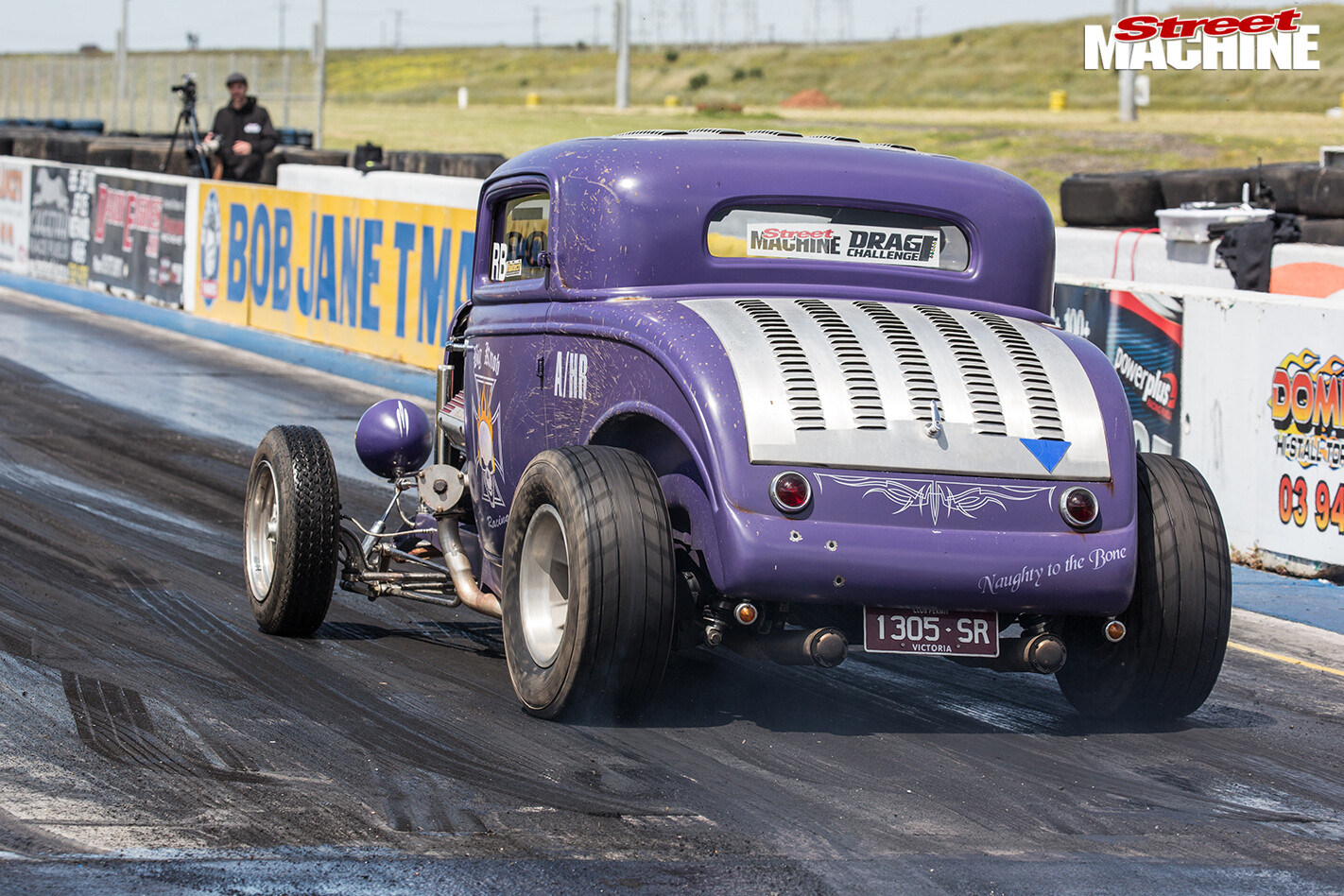 “I didn’t win!” Norm said when we asked him his Haltech Radial Blown placing. “But I didn’t get last, either! We were just there for the fun!

“This was my first year,” he continued. “I wanted to do it last year but couldn’t get out of work. Being first-timers, we were determined to run at each track, and to finish the event.”

Will the lads be back? 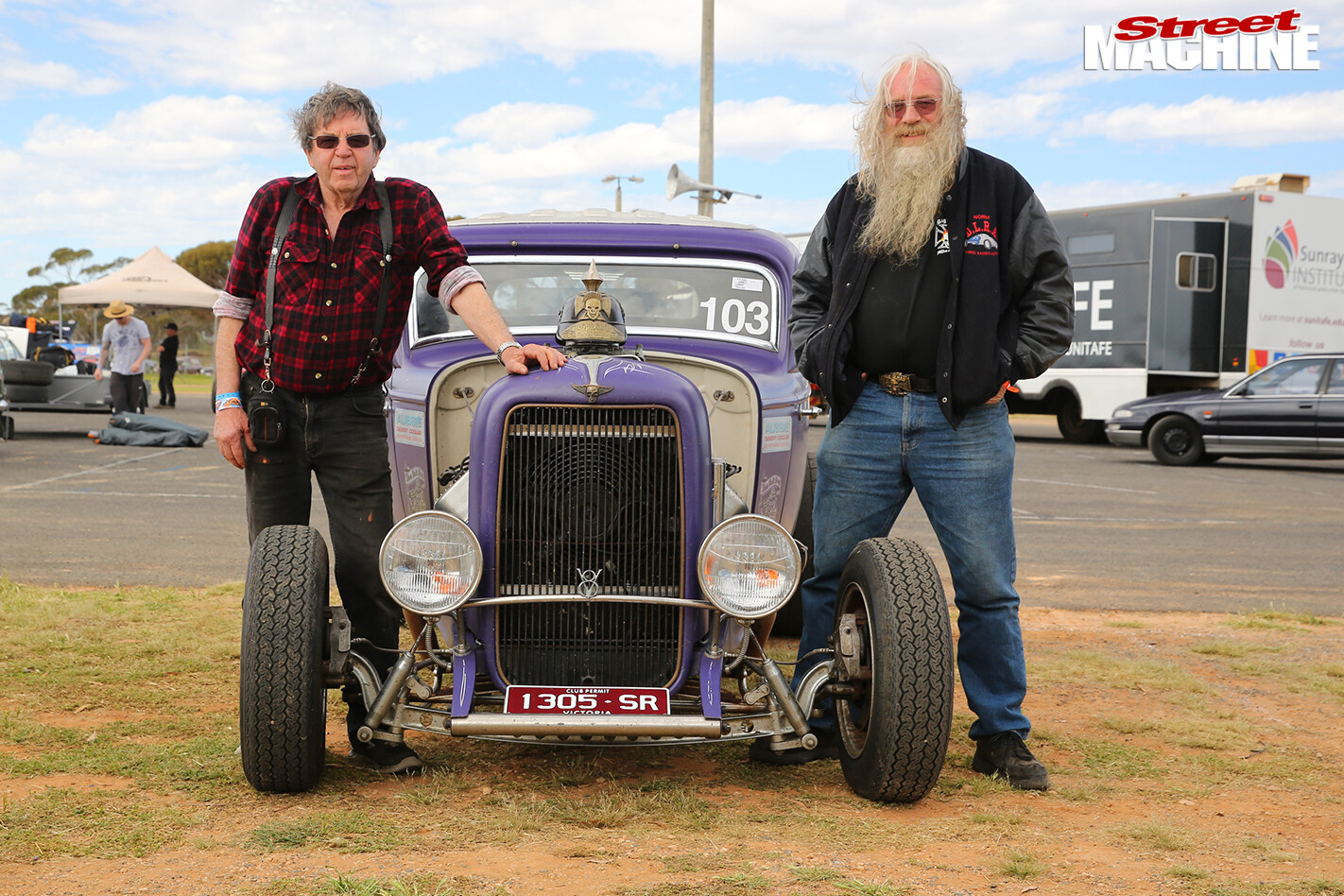 “Yeah – shit yeah!” Norm said enthusiastically. “We’ll be back, maybe with this, but probably with an FJ Holden ute with a V6. It’s just about ready for the road. It’s a factory supercharged V6 converted to twin-turbo.”