RESPECTED racer John Kerr has successfully finished every five-day Street Machine Drag Challenge event so far in his tough, home-built, 364ci-powered ’64 Mercury Comet Caliente. The Comet’s straightforward aspirated set-up is proof that you can score several Drag Challenge Dial Your Own Top 10 finishes and an ANDRA gold Christmas tree while sticking to a tight budget.

And it’s quick. Last year John easily ripped a 10.6-second pass on Day One of DC – a surprise for the drag racing veteran. “On my first run at Calder, a crosswind hit me before the finish line, so I backed off and then got back on it. I was a bit upset at myself, thinking that I stuffed up the run,” John says. “I got the timeslip and had run a 10.61@126mph – the quickest it’s ever been!” 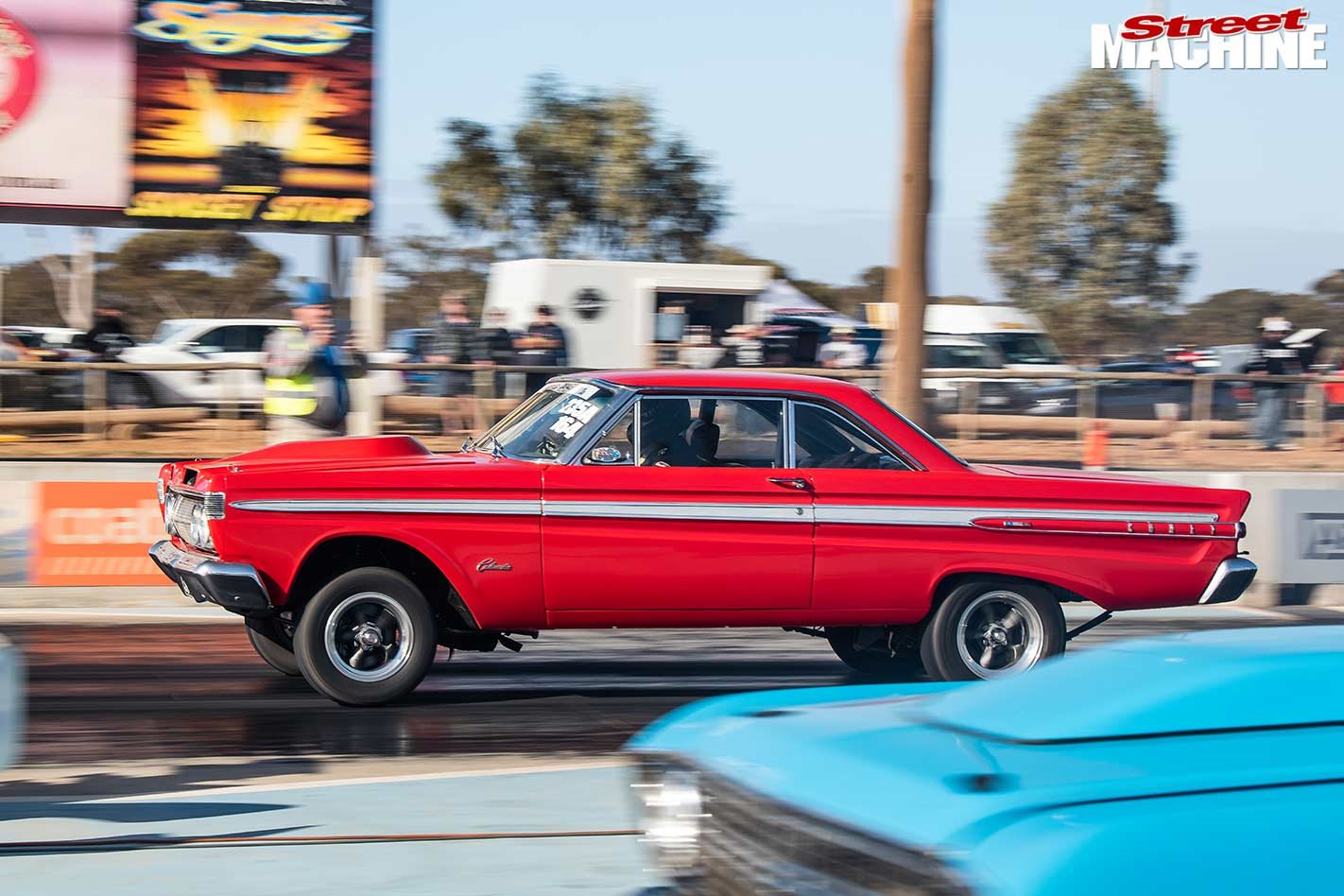 “I like Drag Challenge, as it’s what we’ve always done,” John says. “Before Sydney had a track, every month we would drive our cars to Cowra to race and then drive home to Sydney again”

Going into DC 2019, John’s planned to fix a windscreen and hoodlining snowballed into a bare-metal rotisserie job, and while he was at it, he added a rollcage and a new fibreglass bonnet that allows for a three-inch carby spacer with a larger air cleaner. Next, he did a little maintenance to the 346ci-stroked Dart block. It copped new rings, bearings, valve springs, lifters and a fresh oil pump. “I gave it a hone too; the bores were shinier than my paint!” John laughs. “The lifters had done 50,000 miles, but nothing was badly worn and the valves were still good.”

To prepare for his first crack at Drag Challenge Weekend, John has done further maintenance, ironed out his fuel cooling system and simplified the conversion to open pipes. An open exhaust gains the Comet a tenth or two on the track, and boy, does the 364ci sound the goods as it rumbles up to the startline. “That’s because it’s 13:1 compression,” John explains. And that’s on PULP! “My Crower solid-roller cam has a big overlap that works at high revs and bleeds the compression off through the exhaust.” 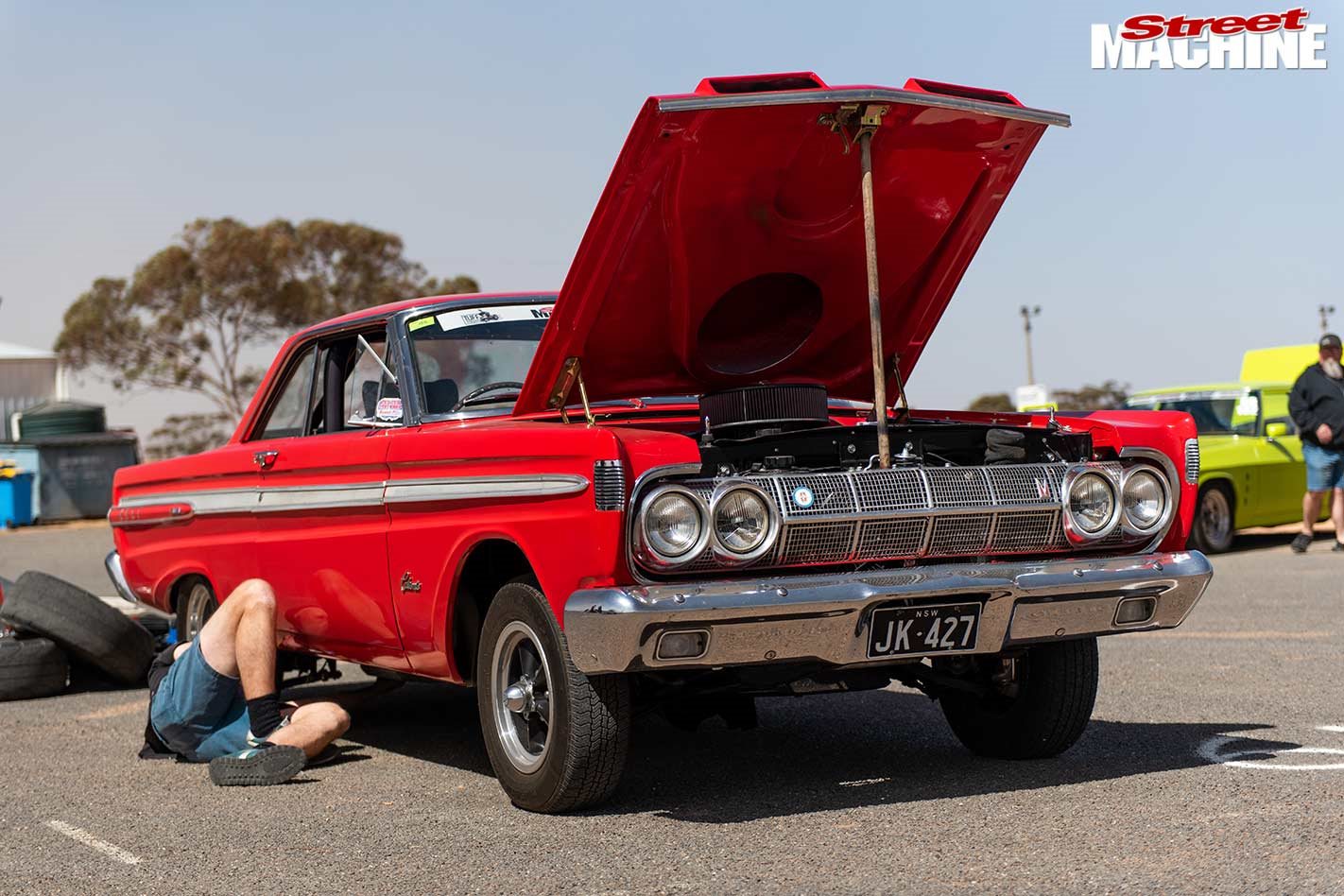 Behind the lumpy small-block is a John-built manualised and fully rollerised C4 trans with a 5000rpm stall, which has kept up with the years of constant straight-line abuse. A nine-inch packed with 4.11s takes up the rear. “It sits on about 4000rpm at 110km/h,” John says of the car’s performance on the long Drag Challenge highway stints.

So, what spanner work does the Comet cop during the gruelling five-day challenge? “I change my gearbox filter halfway through the event, and I do an oil change too,” John says. “I then change the gearbox and engine oil after Drag Challenge.” 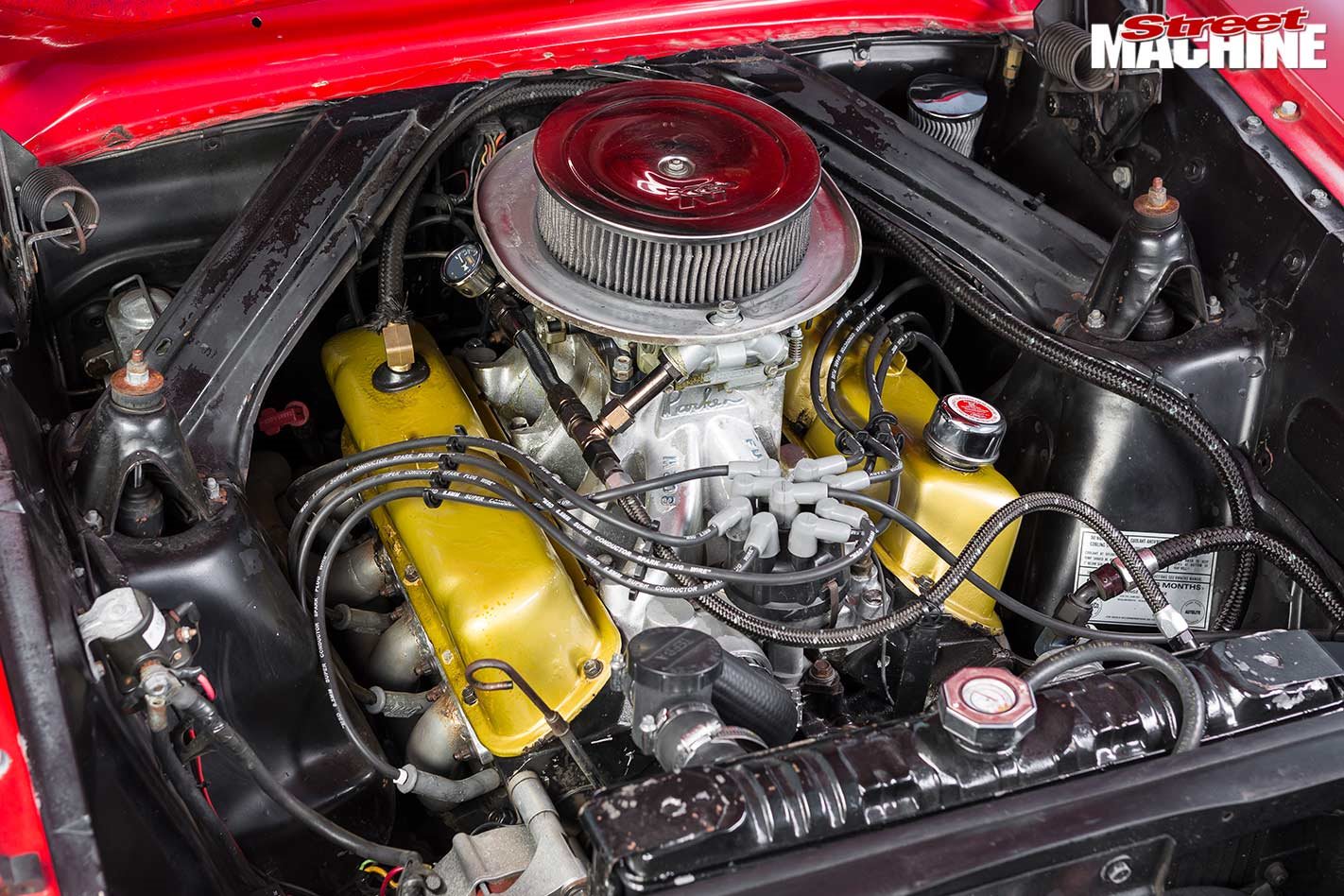 It’s a simple yet effective system that has seen John nab a finisher’s sticker at every DC to date, but it’s not been a walk in the park – from suspension and steering issues to electrical gremlins and a missing crank pulley, the Comet has surmounted quite a few hurdles.

Yet if the worst did happen on the Comet’s first weekender, at least John has one of Australia’s coolest tow trucks to help out: his 1964 Mercury M700. “I’ll tow the Comet up to Queensland, as I like to drive the truck,” John says. 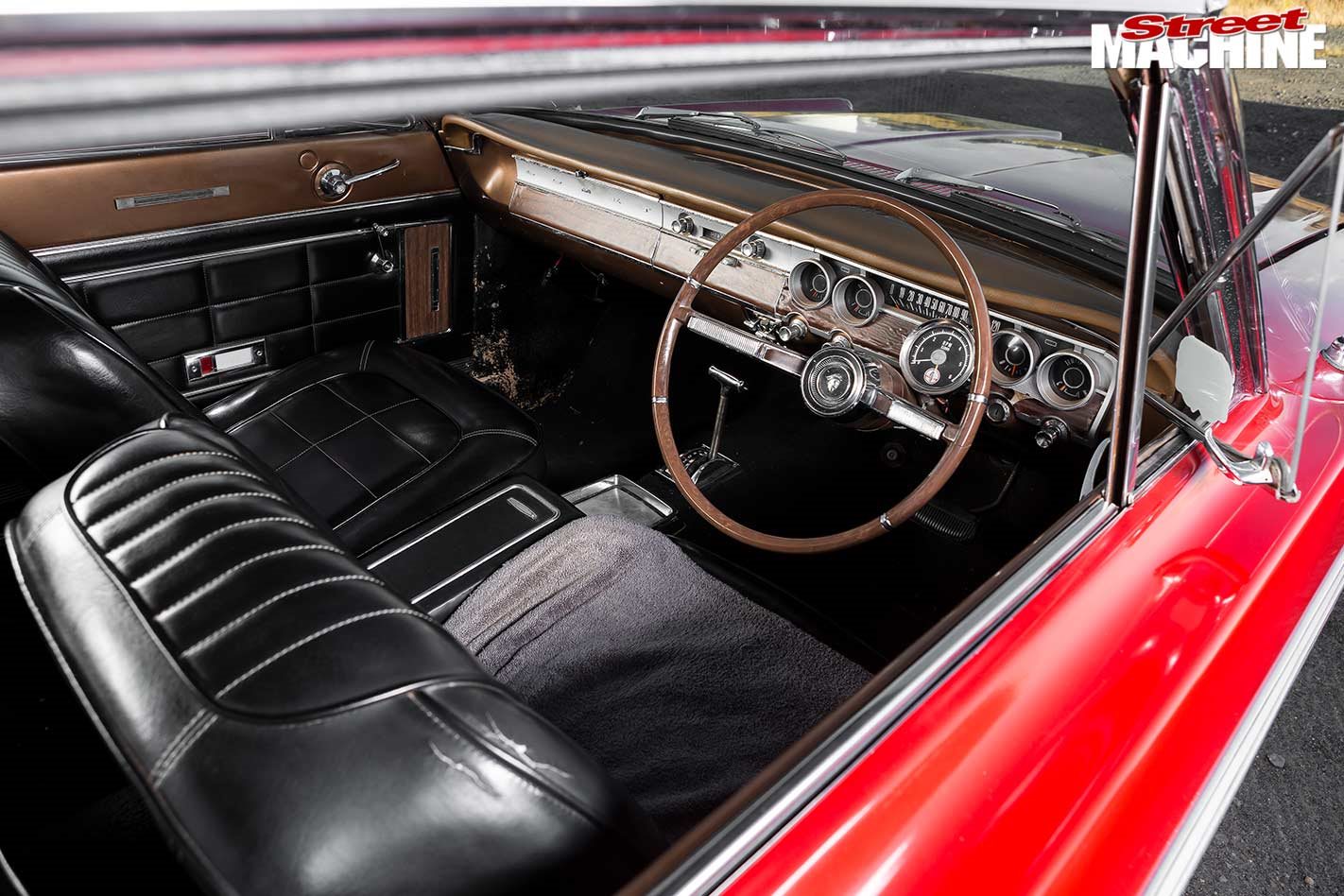 “The tacho is now in the glovebox,” John says. “The Cobra tacho gauge was new-old stock, but it broke, so it’s just decoration now. Auto Meter gauges now replace the original ones and sit in the bezels, so now I can see the oil, temperature and fuel without having to try and look at the gauges in my glovebox!”

Last year John ventured away from his usual Dial Your Own class in favour of the fresh Tuff Mounts Aspirated 235 class to really give the Comet some jandal. “I was getting a bit bored in DYO,” he says. “Going into the 235 Aspirated class is a different style of racing from bracket. I’m going in 235 again this year, as the tyres still have some tread left,” he says. “Now that I have the rollcage and a larger fuel cooler, I can really see how quick this thing goes!” 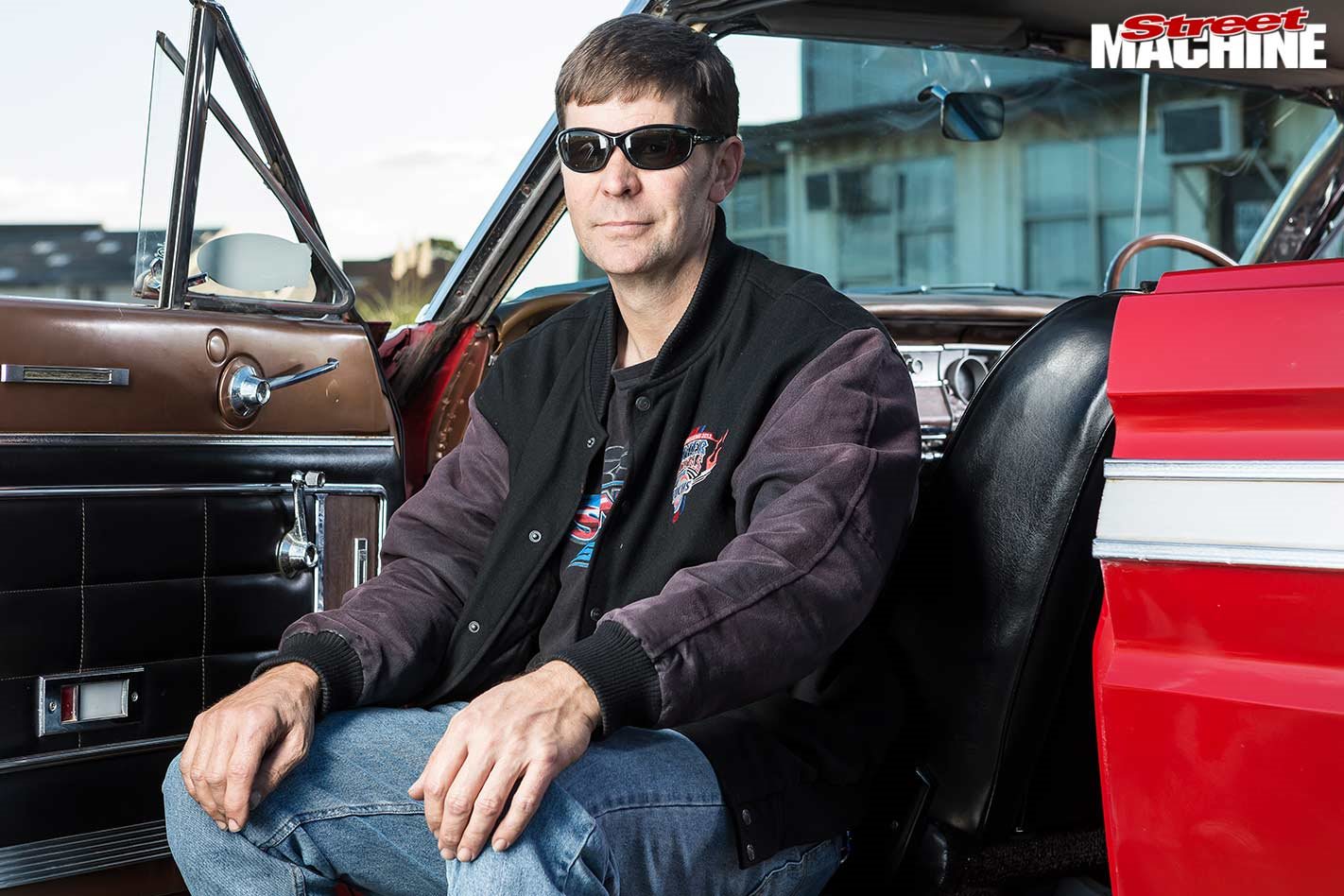 JOHN is forever tinkering with simple, budget-friendly ideas to help run quicker times, which is where his fuel cooling system comes in. Inspired by the 60s cool-can idea, John runs fuel line up the radiator to spiral through a container that holds a plastic frozen water bottle, before the cold PULP enters the donk. A temp gauge on the fuel rail provides the data, and the system has gained John a tenth on the quarter! More recently, he’s upgraded to a complete icebox, so this year’s DCW saw its first test. 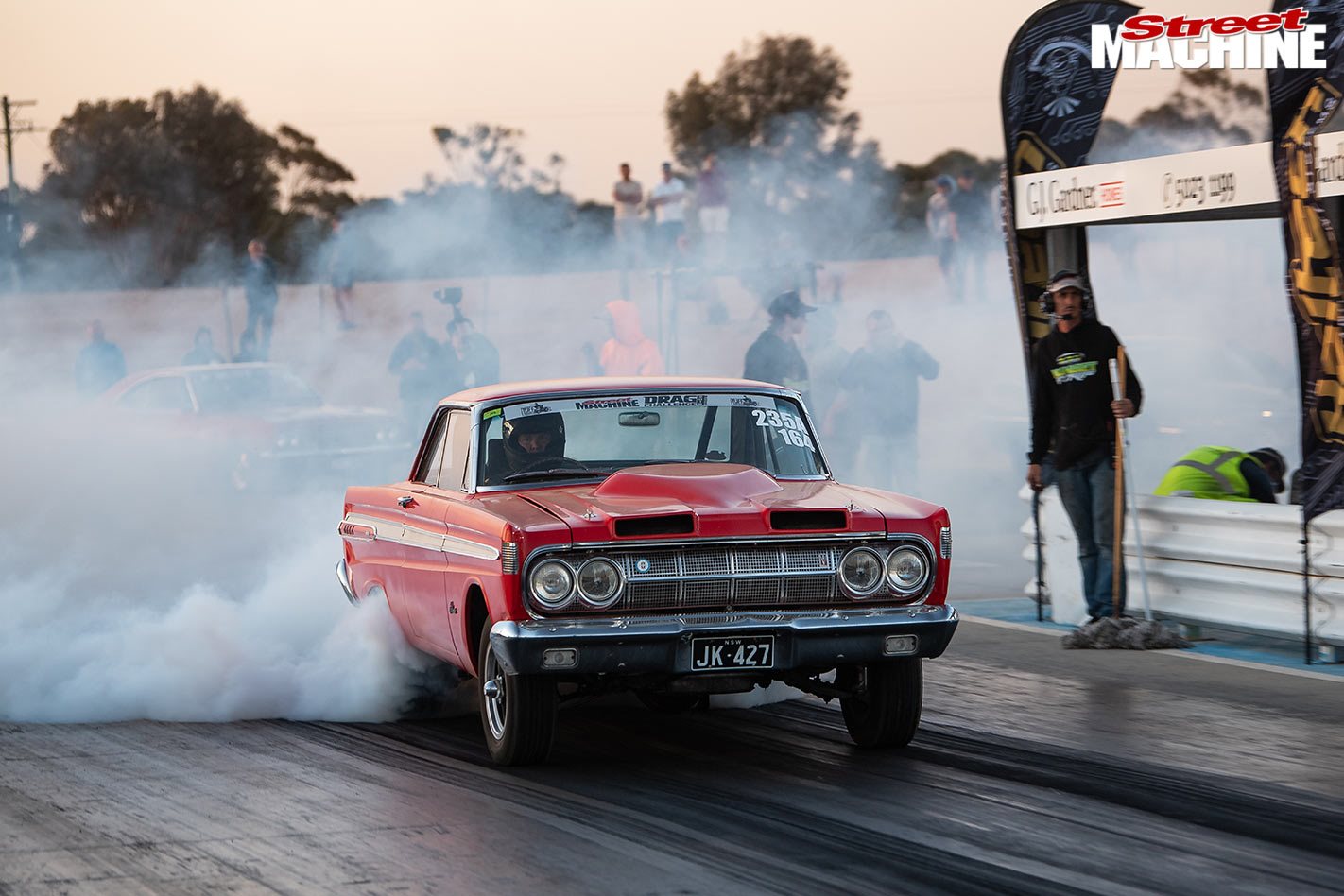