MITCH Pullen’s HiLux has been doing the rounds on the internet as an unusual participant in the growing drift scene, and this year he chose to expand that reputation by taking on our annual Street Machine Drag Challenge. 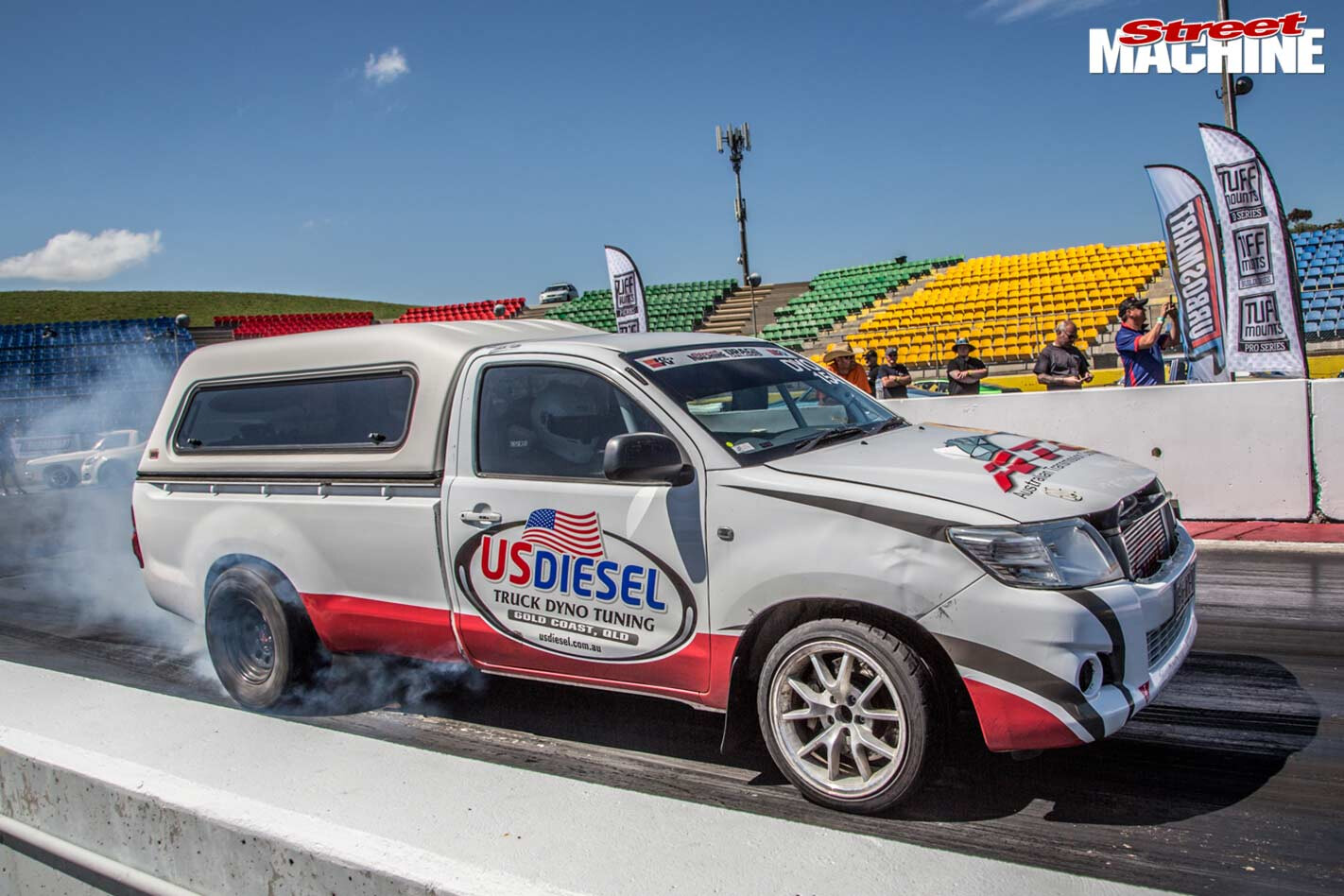 The 2009 ’Lux Workmate was bought as a humble work ute while Mitch was still on his Ps, but his itch to tinker with things eventually got the better of him and soon the standard donk had a big turbo hanging off the side of it. That didn’t last too long though; the ‘unbreakable’ HiLux blew the crank out, prompting Mitch to look for other ways to make the power he wanted.

The first stage of the build involved dropping a standard LS1 into the front and going skid racing at the local drifts. That combo was soon replaced with an LS2-based block sporting forged pistons and a whole heap of goodies. As if a fully built 6.0-litre LS V8 wasn’t enough, Mitch has hung an 80mm BorgWarner diesel truck turbo off the side of it. Wastegate pressure alone is still good for 620hp at the rear wheels, with the potential to wind it all the way up to 800hp on 98 pump fuel, or (believe it or not) the big 1000hp on E85. A Haltech Elite 2500 is charged with keeping all those ponies in check. 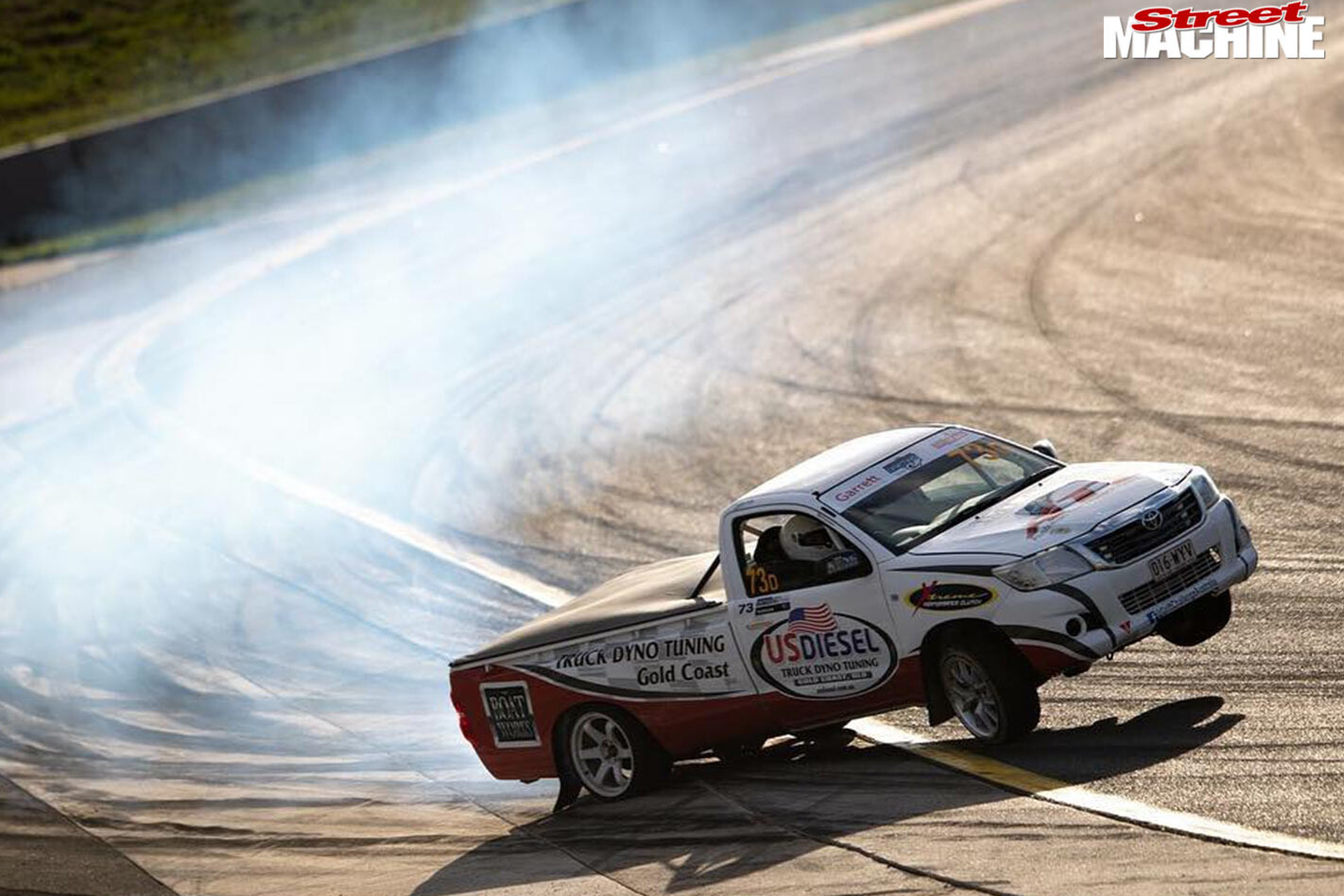 As impressive as the donk is, what’s backing it up is just as wild. A Holinger six-speed sequential ’box, not too dissimilar from that found in a V8 Supercar, helps Mitch pluck gears mid-drift, while a nine-inch diff housing from Race Products with a 35-spline V8 Supercars diff centre (see a trend here?) puts all the tyre-frying power to the ground.

Mitch built the car in his workshop at US Diesel Truck & Dyno Tuning with the help of his dad, who also co-owns the business. All the wiring, fab work and tuning was done there, and the car was also fully ’caged to CAMS standards for drifting. Even though Mitch has been drifting the HiLux for a while now – most recently in the World Time Attack Challenge drift comp – he hadn’t done any real seat time on the drag strip before Drag Challenge, with his first ever runs down the quarter only a week or so before the event. With the aid of some Mickey Thompson 275 radials, he did a best of a 10.80@128mph on wastegate pressure – not too shabby for a first hit-out at the track. 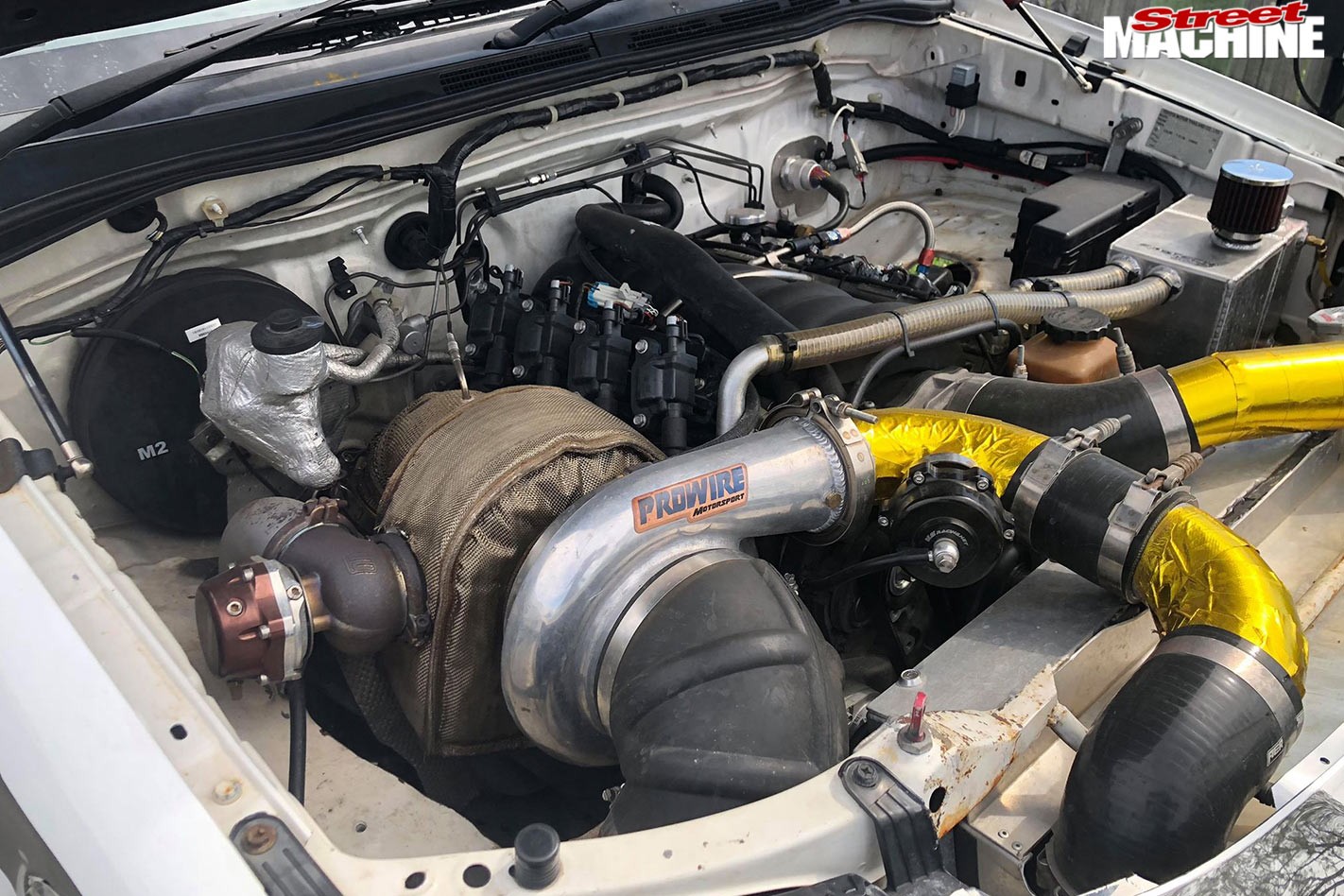 The only changes Mitch made for Drag Challenge were to add a canopy, pull some of the stickers off the car, run M/T drag tyres and soften up the front end a bit. He was confident that the HiLux’s regular street use would put him in good stead for the gruelling driving legs. “It’s still a street car; we’ll usually go and get smoko in it and it does a lot of street driving for what it is,” he said. 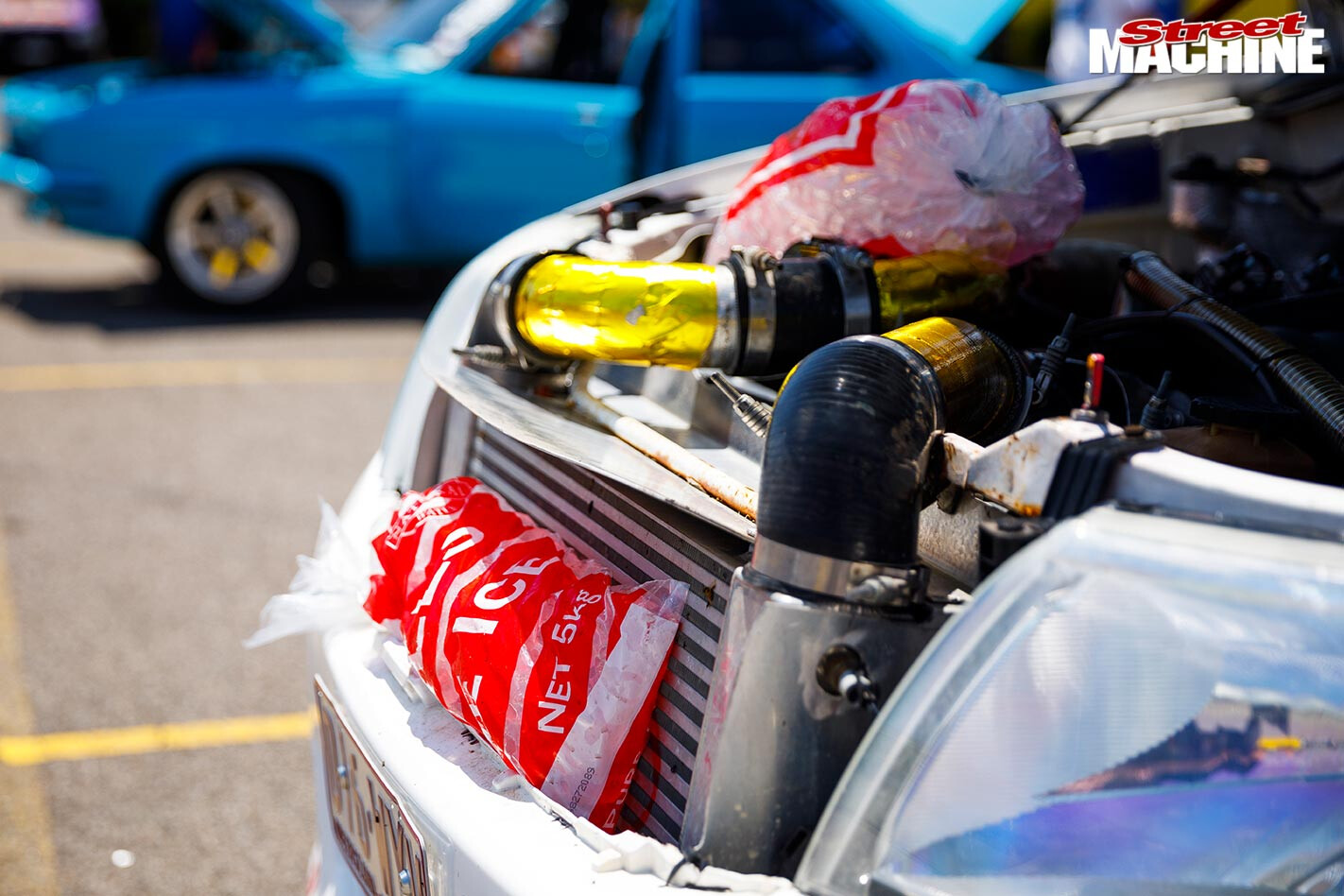 Mitch ended up having an incredibly successful week at DC 2018, with a PB of 9.88@140mph at Swan Hill on Day Two before getting a slap on the wrist from ANDRA for running quicker than allowed. He continued the rest of the week consistently in the mid-to-low 10s in the K&N Dial Your Own class, and ended up taking home the Quickest Stick-shift award for his troubles. 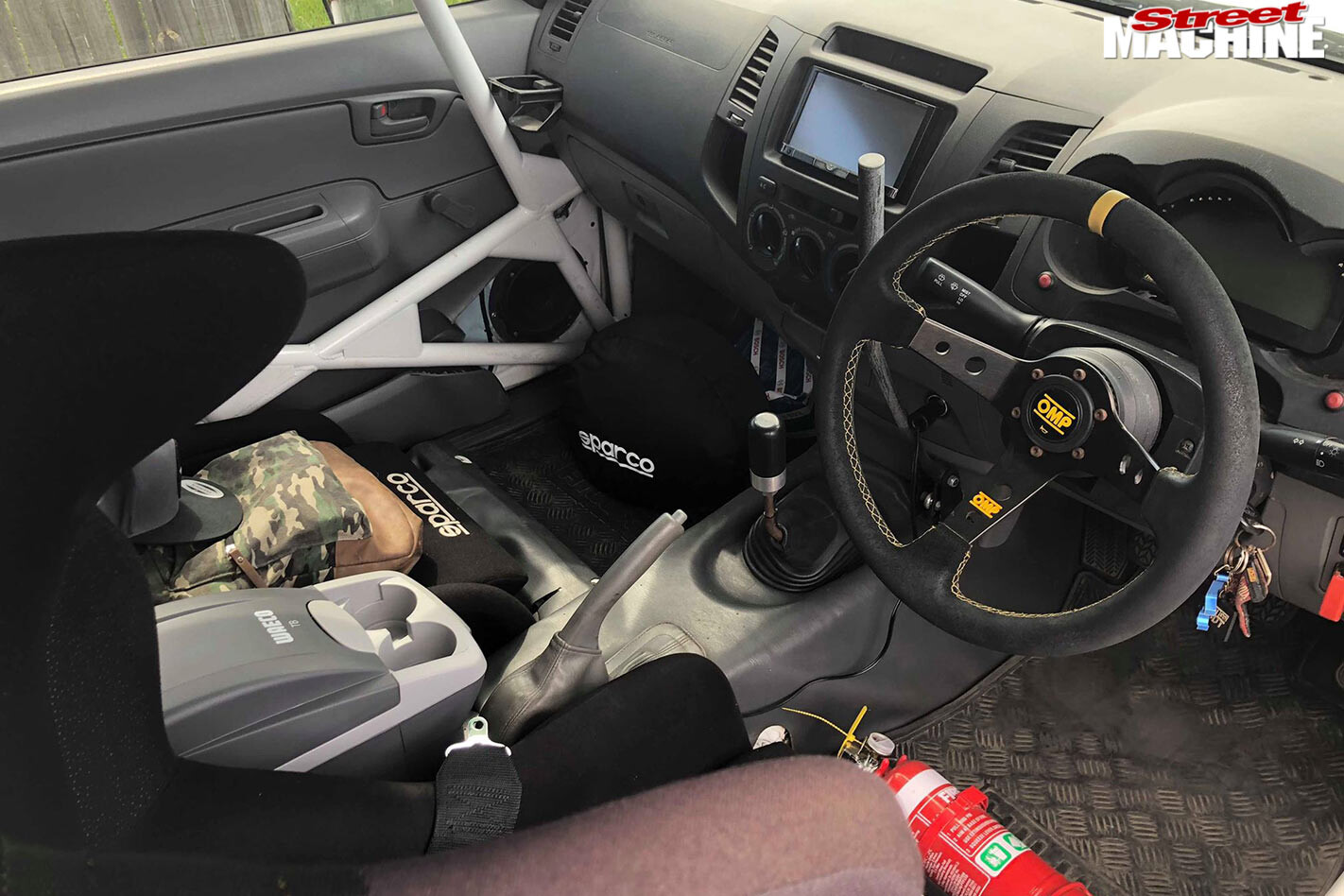 “I can’t wait to be teched and dial it in for next year. We might get deep in the nines, and next time I’ll probably run in Outlaw Blown. I think the car should launch better on a bias-ply,” Mitch said.

“Thanks to my dad Hayden Pullen from US Diesel, John from Australian Transmission Components, Race Products for the nine-inch, Xtreme Clutch, The Boat Works, Whiteline, Kyle at KB Fabrications and Mark at King Springs.”