DAY four of Street Machine Drag Challenge saw us at the brand-new quarter-mile at Swan Hill in Victoria. Our original plan was to race at Portland’s South Coast Raceway, but weeks of rain had left the pits sodden. Swan Hill had their own inaugural meeting rained out a couple of weeks ago, so the Drag Challenge entrants had the honour of being the first racers to hold a meeting on the new track. And what a great track it is. The Swan Hill Drag Racing Club don’t yet have much in the way of facilities, but they have an excellent strip in a picturesque setting. And, as it turns out, excellent tucker – among the best we’ve had at any dragstrip in the country. To decide who got to take the maiden voyage down the strip, we held a raffle after the driver’s meeting. Half of the proceeds went to the SHDRC and the other half went to Cerebral Palsy Alliance, raising $2070 all up. The winners of the auction were Mark Talbot in the Barra-powered XD Falcon and Bushy in his tough Holden Adventra. 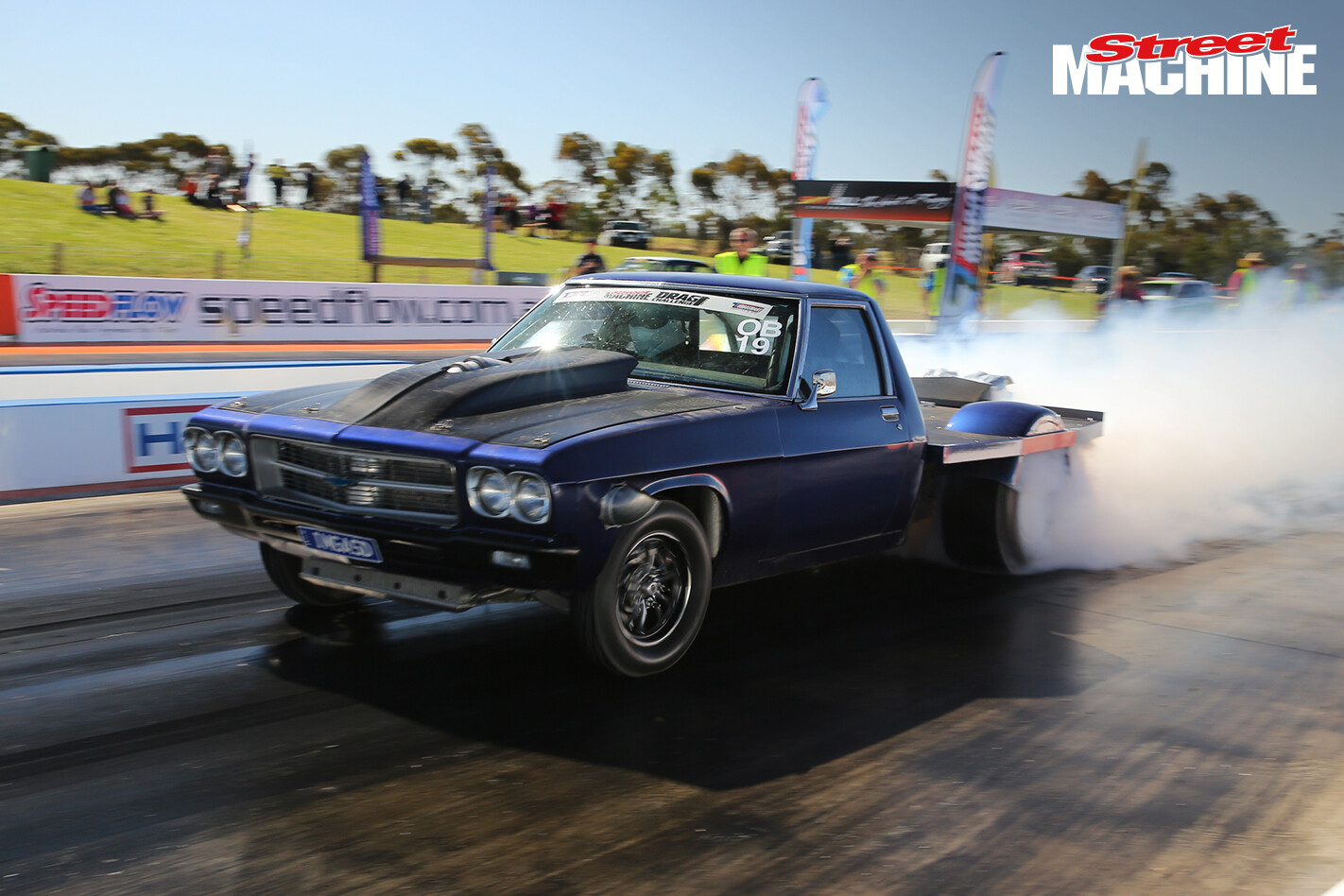 And with that, racing was off and it was clear early on that the track was well-suited to the DC competitors. The star performer of the day was Jarrod Wood in the IMGASD HQ Holden one-tonner. With 600ci and massive turbos, Jarrod’s motor can pretty much make as much power as it likes, but the car struggled to get the power to the ground at the first three tracks. Not so at Swan Hill and Jarrod signalled his intentions with a couple of 8.3s, followed by a 8.21, an 8.06 and even an 8.009! He then broke the seven-second barrier twice, with a PB of 7.81@182mph. In one hit, Jarrod not only became the first person to run a seven at Swan Hill, but he is now one of only three guys to have run a seven on Drag Challenge and is currently owns the quickest and fastest pass over the three years of the event. Jesse Boothroyd in the Crusty Kingswood also hit a much-longed for goal, running his first eight-second pass in the single turbo, LS-powered HZ. The Haltech boys had a great day piloting Mark Arblaster’s POR440 VG Valiant hardtop, driving the car to a new best of 9.41. Pretty good for a 3500lb car on 235 radials! Mark Drew had another strong day, running a best of 8.583-seconds in the Crusty Torana. Drewy headed all the way back to Geelong afterwards, adding an extra 200km to the trip, but worth it for a night at home before heading to Calder Park. Not everything went swimmingly for all of the Drag Challenge competitors, though. Event leader Bubba Medlyn ran a 8.658 in his Commodore spat a crank trigger wheel. Naturally, you can’t buy one of those to suit a Torque Power blocked Holden V8 down at Repco, but he got it sorted and was on his way to Calder before dark. 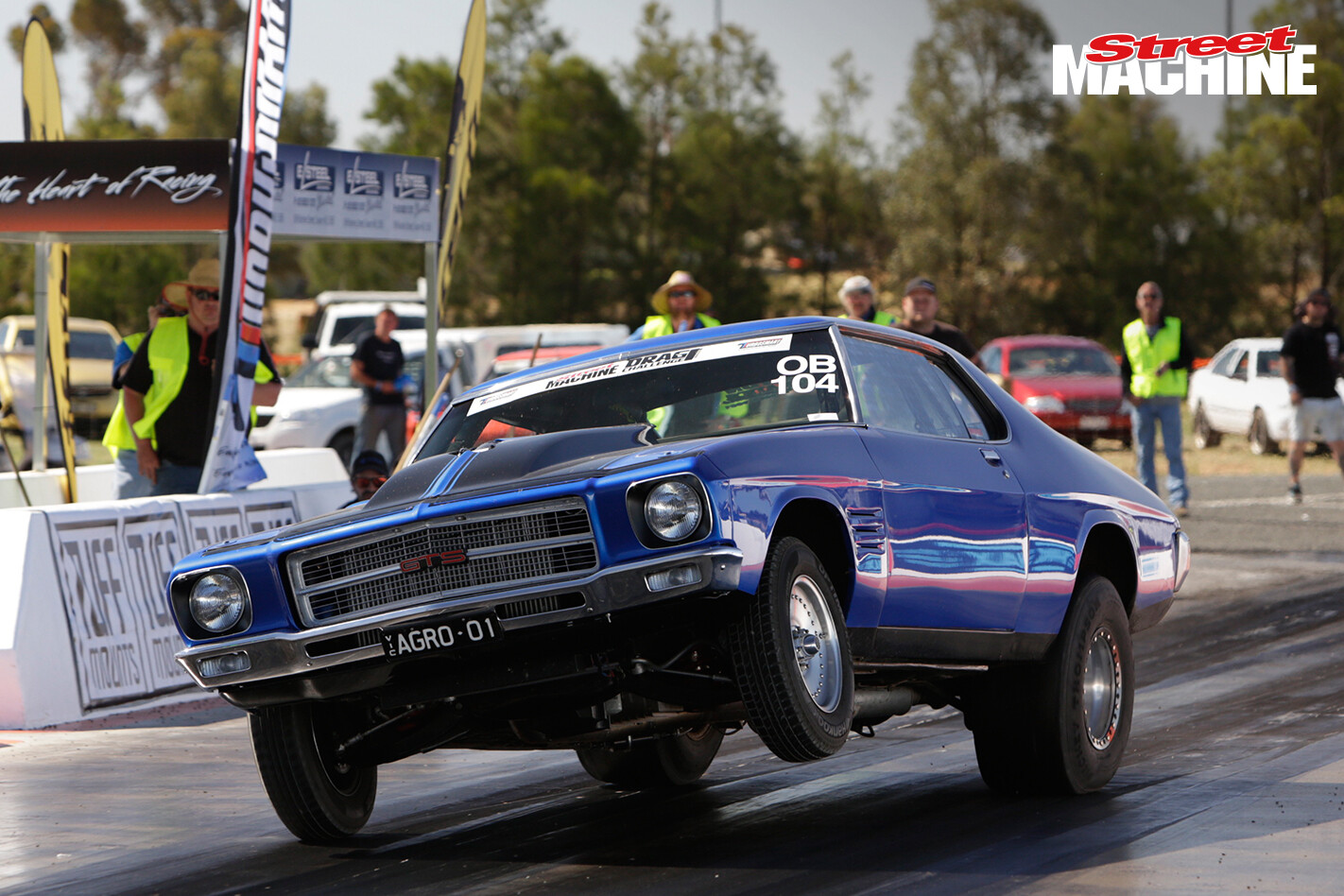 Three-time Drag Challenge veteran Brendan Cherry has his HQ Monaro singing to the tune of 8.6-seconds. However, a broken anti-roll bar saw Cherry pull an AGROHQ-style launch, resulting in a buggered diff. Brendan is confident of a fix though, and looking forward to Calder. 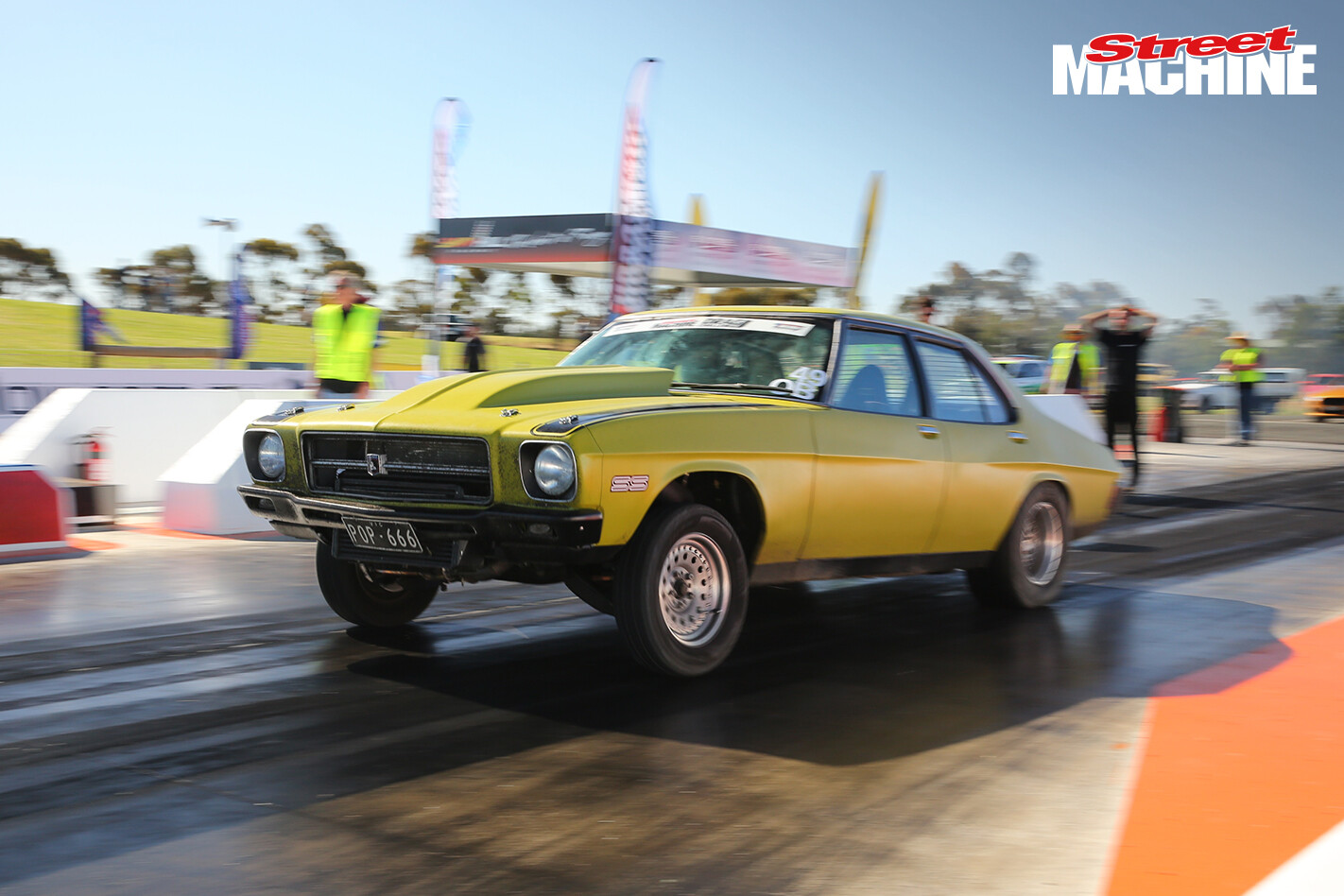 Harry Haig and the Shonky SS team arrived late after performing a cam swap in town. Bob and Tony from BT Performance in Swan Hill donated the use of their facilities for Robbie Abott to work his magic with the mechanicals. Harry made it to the track with about an hour left to run and ran a best of 10.53-seconds only to kill a rod. Despite being on their umpteenth day of no-sleep thrashing the boys are going to do a quick fix to keep the HQ on the road to Calder. Respect! 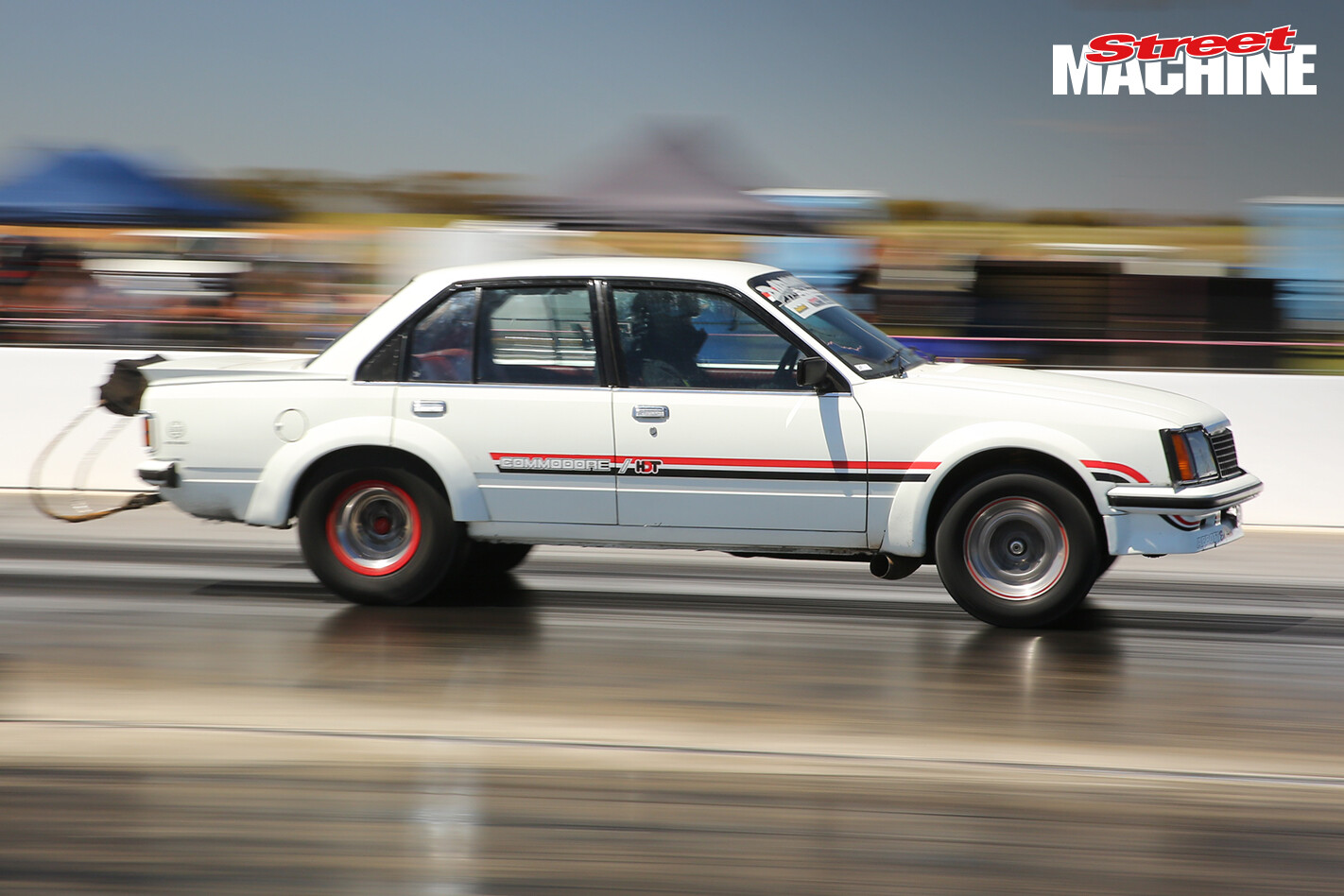 Terry Seng and the Paramount Performance crew had some transmission woes during the day and also headed to BT Performance to swap in a new auto for HDTX275. The managed a stout 8.509 at Swan Hill and will be hoping to really open the taps at Calder. 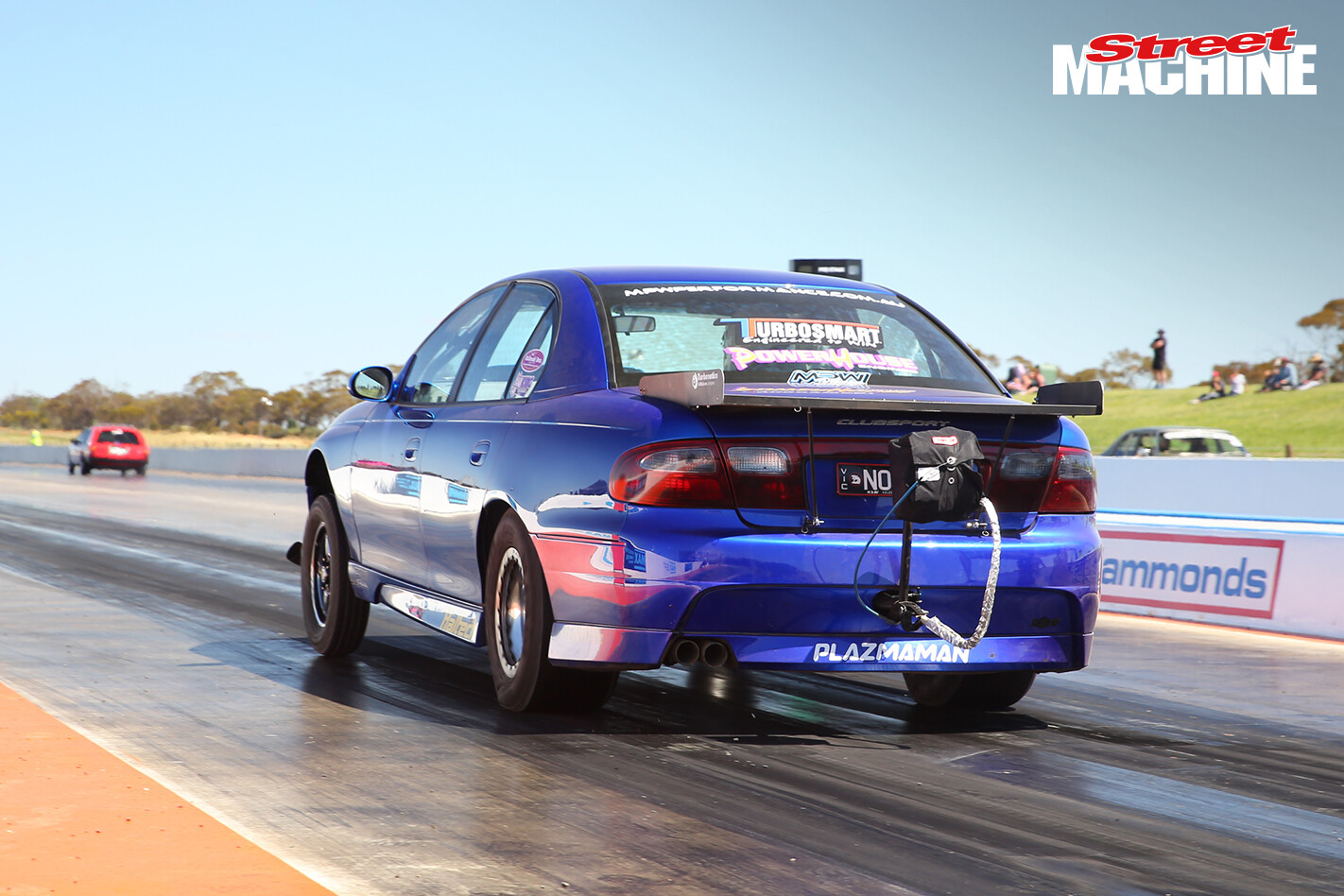 Adam Rogash battled fatigue and electrical gremlins but still ran an 8.529 in NOSHOW. The biggest hard-luck shout out goes to Scott Levy and his mates in the blue El Camino. The Chev blew a motor yesterday, then put the call out to buy or borrow a replacement to keep them in the game. Scott’s old mate Greg put his hand up to deliver a strong 383 from Warrigul to Mildura and arrived late on Wednesday evening at the Big 4 with both and engine and a 6/71 blower in the tray of his ute. The lads got the bulk of the conversion done overnight, had a couple of hours sleep and then buttoned it up in the morning for the drive to Swan Hill, in convoy with Rob Colombani’s Camaro. The El Camino arrived about 10 minutes after the staging lanes closed. And to really rub salt in the wound, the blown motor went bang before the guys had got very far down the road. A tough day at the office, but how staunch are these guys?

The event climaxes tomorrow at Calder Park Raceway. Gates open at 2pm, racing starts at 4pm and then winds up at 9pm. Entry is $25, we look forward to seeing you there!