The Haltech Radial Blown cars came to throw down on Day Three. With Frank Marchese, Adam Rogash, Mark Drew and Lorenzo Gullotto separated by 0.444 of one second, first to fourth, it was anybody’s race. 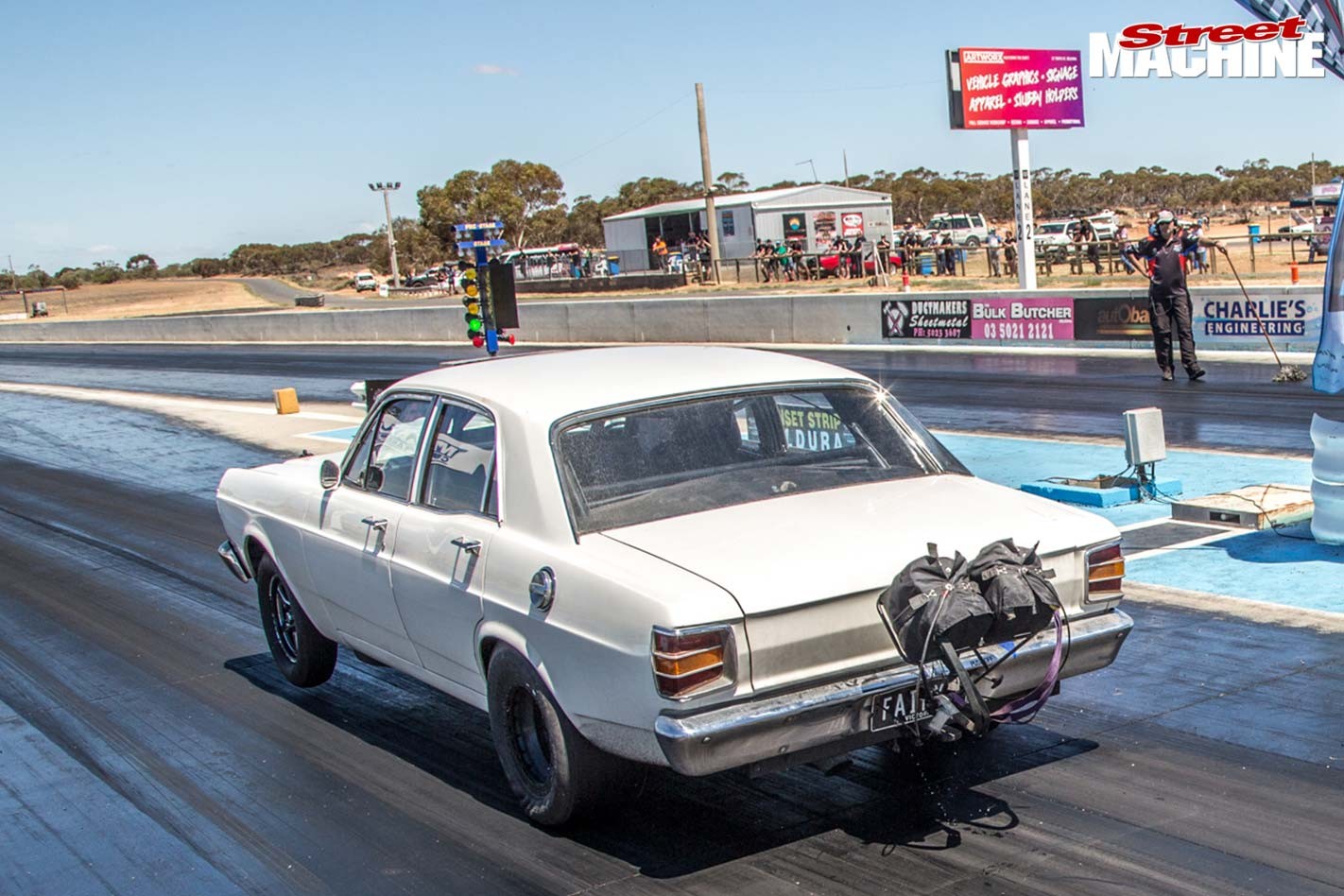 Frank Marchese spent most of the day getting his epic-tough XW prepped for the Sunset Strip tar, but came out late to run the second-quickest time of the day with a 5.13@148mph. Having driven through rain and dust storms between Swan Hill and Mildura, Frank did enough to solidify his class lead and second overall.

Marchese just pipped Adam Rogash, who did a bunch of laps to finish the day with a 5.26@142mph in the ALLSHOW VK Commodore. Adam came a hair’s breadth in front of fellow MPW fiend Luke Foley, who pushed out a 5.27@138mph in his rebuilt VH SL/E Commodore to land fifth in class.

Mark Drew popped out a 5.48@116mph before hurting the Crusty Torana sedan and dropping out of the Drag Challenge 2018 running. In a double sting, his turbo HR sedan, piloted by Kon Michaloudakis, also retired from the Haltech Radial Blown class after running 9.49@153mph at Swan Hill on Day Two. 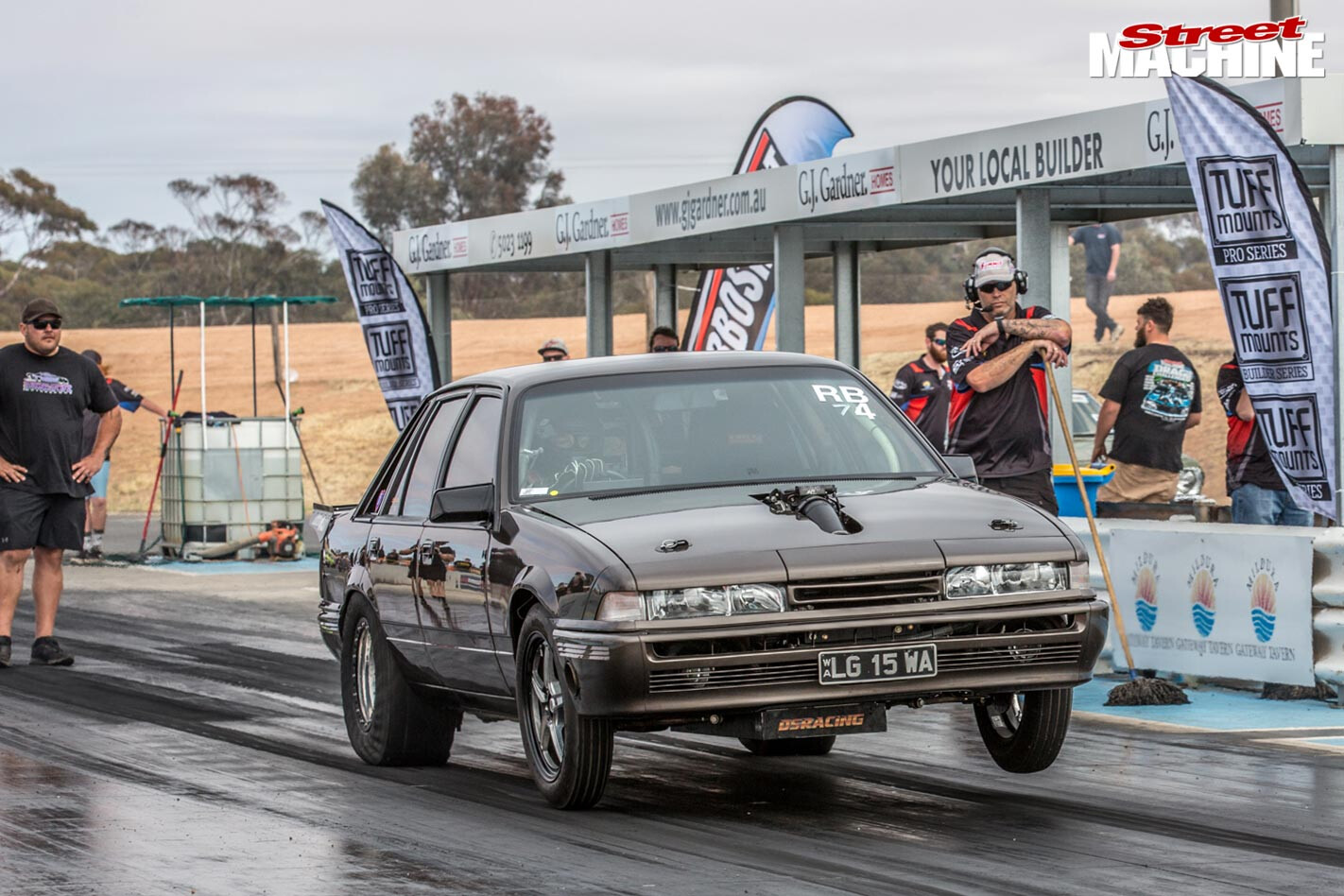 Lorenzo Gullotto came away with the quickest time of the day and the first four-second pass at Drag Challenge on the eighth-mile, running 4.97@144mph. The West Aussie’s VL Calais was packed up before lunch and ready for a lazy trip back to Swan Hill, where he was looking forward to seeing how hard he could push the twin-turbo LS combo. “We know what this thing can do, power-wise, but we have to manage getting it to the track,” Lorenzo said. 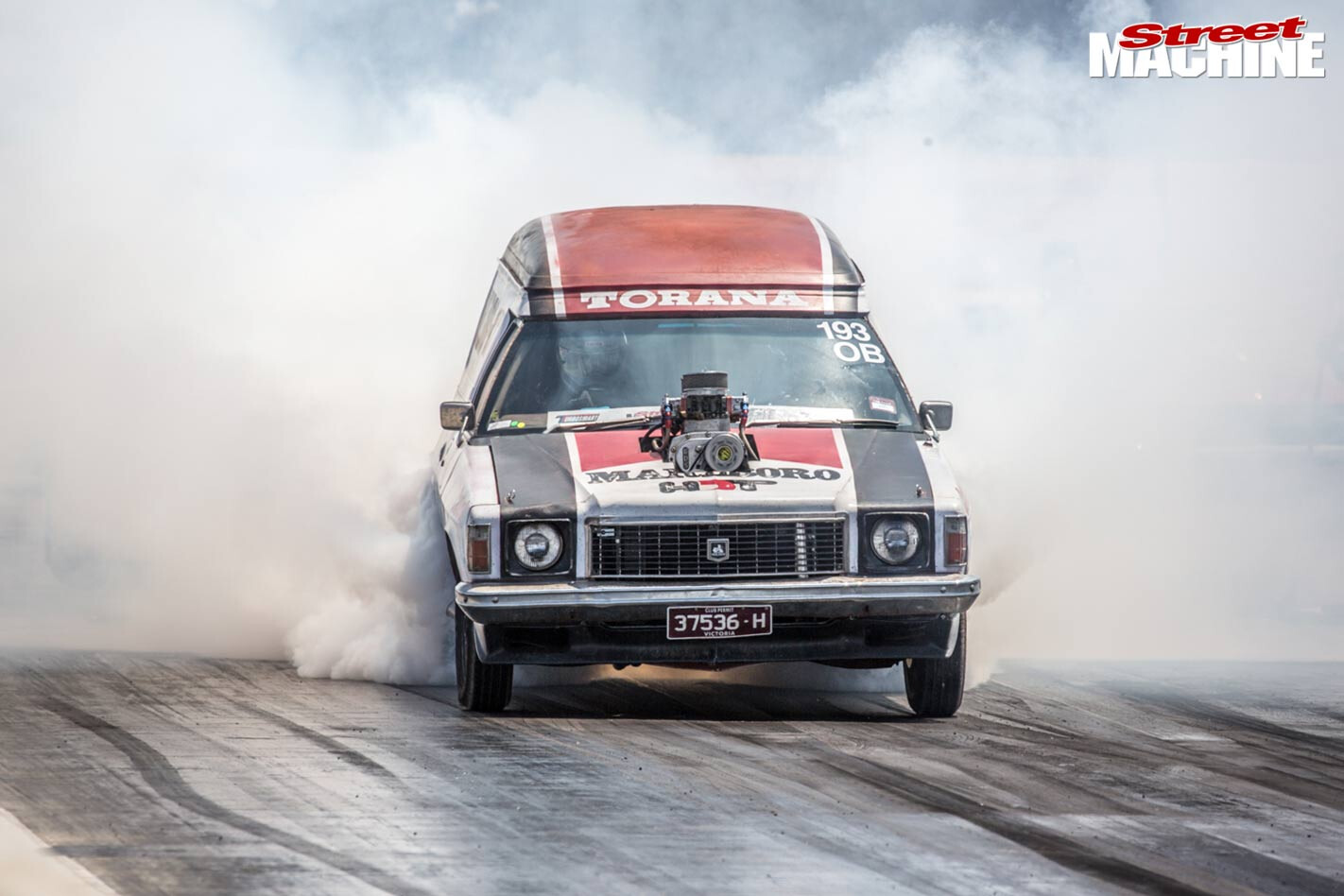 THE Turbosmart Outlaw Blown class had a day of attrition at Mildura, with eight of the 18 cars in the class out by day’s end. However, Harry Haig came in leading and left on top of the standings.

Outright leader Harry pulled the third-best time of the day in POP666 at 5.18@145mph. While he had a to-do list at the start of the day, Harry admits he forgot to turn on the CO2 for his first run, then struggled with a toasted vac line on the second run, before putting together the blinder on the third pass. 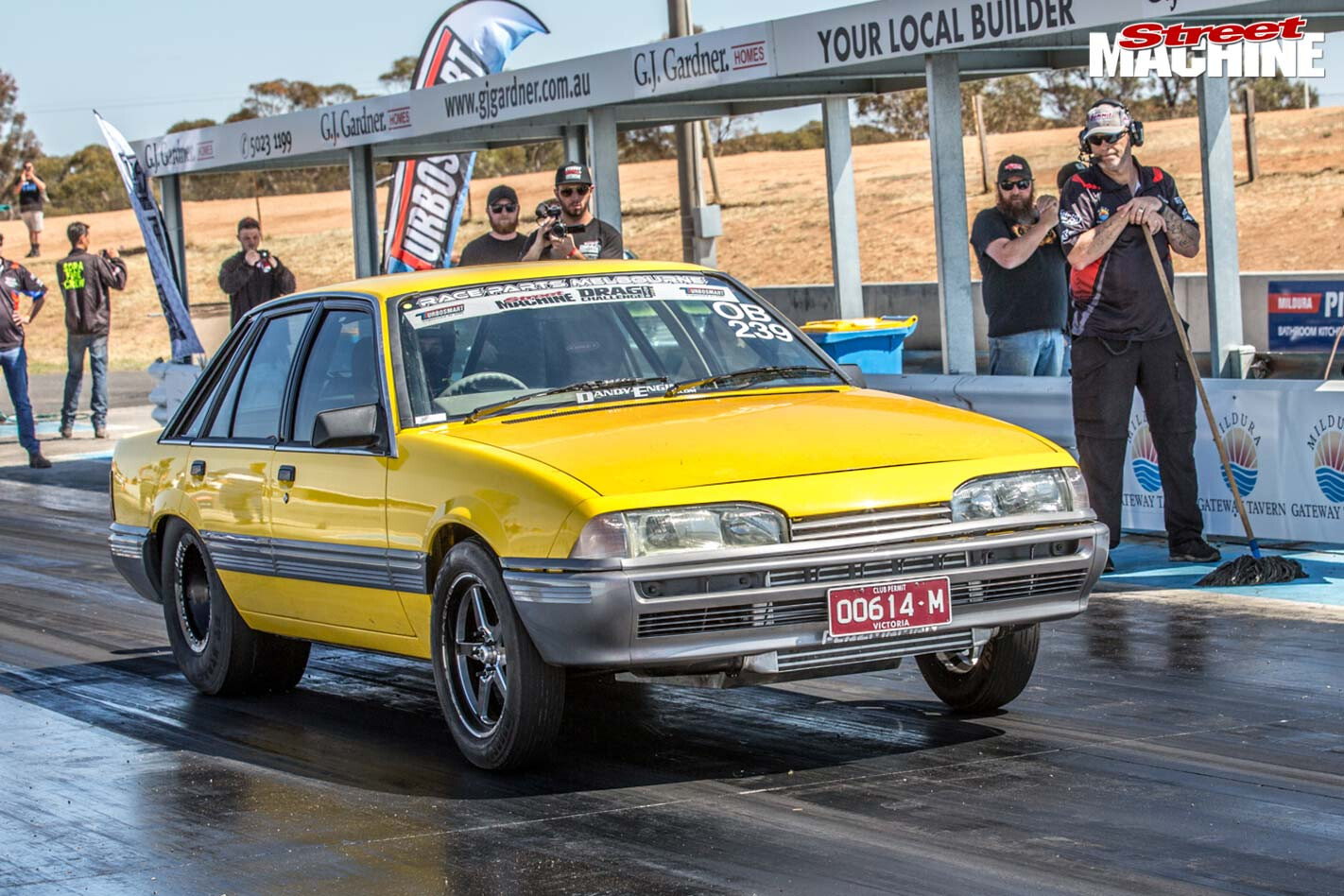 John Ricca’s BT1 smacked out a killer 5.26@134mph, even though his 3.2-litre RB six-cylinder was running 47psi, well down from its peak potential of 60psi. The Absynth Yellow ex-highway patrol sedan was on a hunt, but got the time done early to spend the bulk of the day exploring the 300km route back to Swan Hill.

Mark Sass struggled to get his centrifugally blown VT Berlina down the strip without turning his rear tyres to puffy white clouds. He ended up with a print-out showing 5.80@126mph.

Alex Moshopoulos’s twin-turbo 411 ci XY Falcon wound up with a 5.56@128mph, after a bunch of laps trying to get the power down.

Jake Edwards overcame his Day One troubles to lay down a 5.90@118mph in his turbo 355ci plastic-powered Torana, hitting the road early. 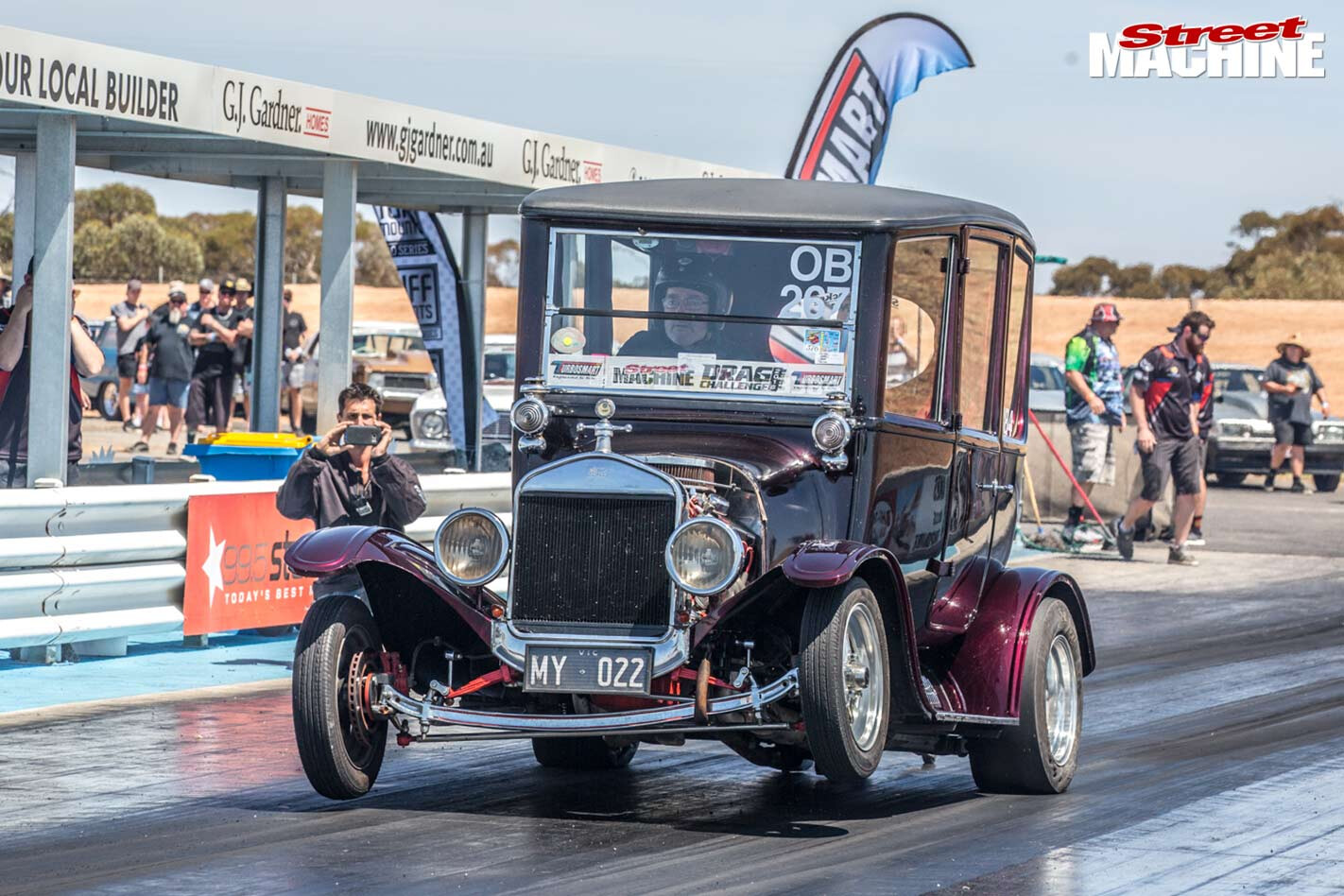 One of our favourite Drag Challenge veterans, Noel Inman, grenaded the transmission in his ’22 Ford Model T, though he did turn in a timeslip of 8.28@55.5mph.

DAY Three saw our Pacemaker Radial Aspirated competitors head north to Mildura’s Sunset Strip eighth-mile, which would surely test their cars’ reliability. While a clear favourite is leading the charge, the competition for the minor places is as hot as temperatures on track.

Alon Vella once again stamped his authority on the class, stretching the gap to second place to just under three seconds with a run of 5.57@123mph – giving him a cumulative total of 23.376 at the end of Day Three.

Dylan McGavigan came in strong once again with a 6.27@107mph in the LS-powered Cortina to hang on to second spot.

Peter Haravitisidis’s XY Falcon is nipping at Dylan’s heels in third spot, handing in a 6.36@108mph and trailing Dylan’s Cortina by just hundredths of a second on combined results.

Nathan Ghosn’s Capri is still suffering from head gasket dramas, which he estimates is putting him around three-tenths off his best pace. Despite this, he still flashed up a 6.29@109mph to keep fourth spot.

Michael Ryder’s VN SS Commodore has been recording PBs all week, and after clocking a 6.76@101mph he displaced Anthony Burns’s XE wagon to move inside the class Top 10.

Two of the hot rods in Radial Aspirated had dramas on Day Two at Swan Hill, but both cars managed to get passes in at Mildura.

After blowing a diff centre on Day Two, Rod Jones worked late into the night to get his Ford sedan fixed, and with a low-ratio 2.78 single-legger replacement diff centre, he made it to Sunset Strip to post a 9.23@80mph. 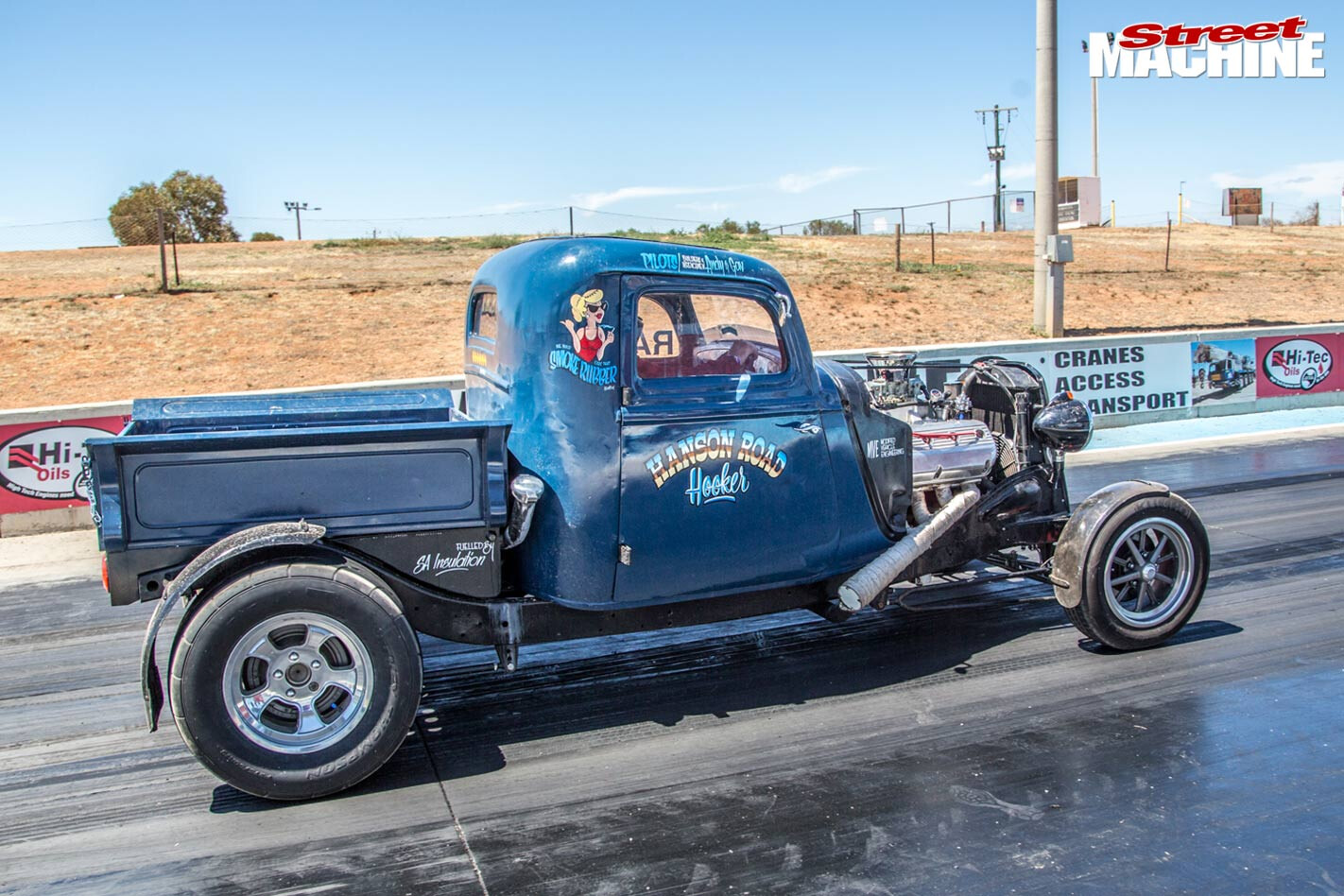 Andy Milne’s ’34 Ford ute bent a valve at Swan Hill on the first pass, and after sourcing replacement heads from Adelaide the crew worked until 6am to get the car ready for the drive to Swan Hill. Starting the day late, they still managed to get in a few passes, the best being a 9.23@82mph – a remarkable effort given the commitment required just to get the car to the track.

IT SURE is a hard slog for high-horsepower aspo rides. Paul Wood bowed out yesterday evening with lifter failure from the 632ci in his LC Torana while hiking it from Swan Hill to Mildura. Matt Jones and his HK ute are also out of the running. Of the seven remaining, it’s Daniel Cassar still in the lead. While his first pass resulted in wheelspin, Daniel kept lining up his sinister ’32 coupe until it ran the class’s top pass of the day with a dead-straight 6.29@107mph.

Mark ‘Bushy’ Busscher is right on Daniel’s tail and keen to take the crown. “We’re four-tenths off; it should run 9.6s on the quarter,” Bushy said before his first pass of the day in his Tonner. In a quest for the tenths that he knows his HQ is capable of, Bushy changed out his fuel pump to lay down a 6.30@107mph, putting him at a theoretical 9.7sec quarter.

Third in class, both cumulatively and for Day Three, was Drag Challenge veteran Jon Mitchell in his 440 Dodge Challenger, managing to crack a 6.76@101mph on his first pass of the day. While the Challenger blew the motor last year, so far things are going smoothly in 2018. “We want to hit the road early so that we can get to the caravan park, have a shower, a few beers and go out for dinner,” Jon said.

AFTER a good day at Swan Hill on Day Two, Zaaron Titmarsh arrived for Day Three at Mildura’s Sunset Strip top of the DYO class in his 363ci V8-powered AU Fairmont wagon. But by the end of the day it was experienced drag racer Alysha Teale and her mean black HQ Holden that was on top, with an almost too-small-to-measure split of 0.00708 seconds. Jeez!

Zaaron drifted down to seventh position, while previous second-runner, Paul Topping, dropped to fifth in his VF Clubby. Another old hand at the quarter-mile, ex-Super Stock national champ Darren Parker, took Paul’s place in second with his cam-and-heads daily driver VFII SS Redline Sportwagon. Chris Martin and his Camaro are sitting in third. 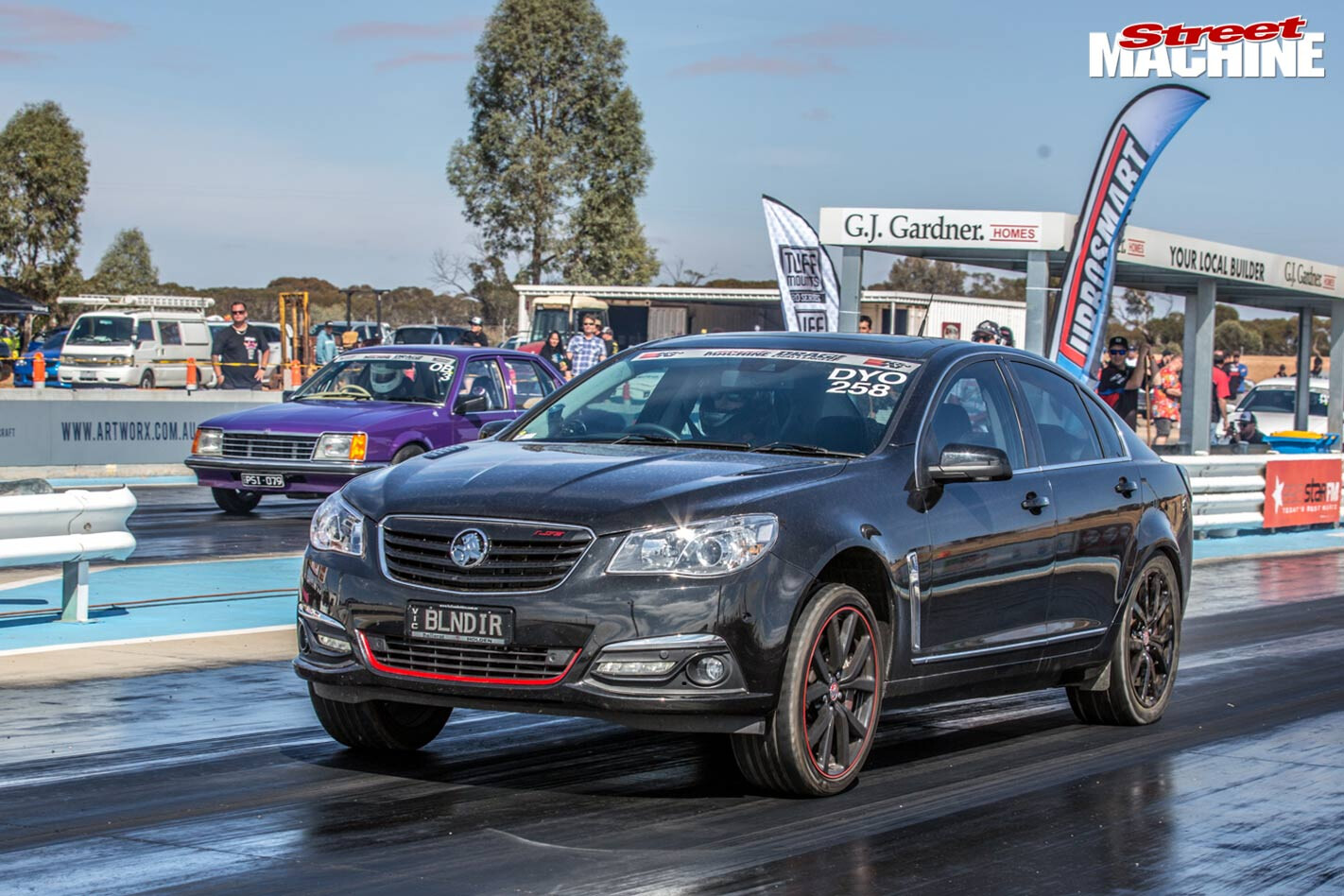 Thankfully, there seems to be nothing but happy faces in DYO, with no mechanical mayhem; the biggest worry anyone seemed to have at Mildura was Steve Nightingale’s XA Falcon diff seal – fixed within two hours.

DRAG Challenge’s Day Four action is back at Swan Hill’s superb quarter-mile. We’ll keep you in the loop via whichcar.com.au/streetmachine and SM’s social channels.