THE weather conditions at Swan Hill for Day Two of Drag Challenge 2018 were beaut for the hard-chargers in the Haltech Radial Blown class, with warm daytime temperatures but overcast skies keeping the track surface from heating up too quickly. And it didn’t take long for the times to start diving towards the mid-sevens. Mark Drew was one of the first out in his Crusty LH Torana, nailing a 7.85@177mph before handing in his timeslip and hitting the road towards Mildura. This run was good enough to put him third in class and fourth on the overall leaderboard.

Mark Van Der Togt’s heavyweight XW Fairmont has struggled to put its huge power down at Drag Challenge 2018, and he spent plenty of time turning the tyres at Swan Hill. Although his twin-turbo X-dub has run in the sevens before, the Drag Challenge Weekend Outright winner pedalled to an 8.52@169mph before heading to Mildura in eighth place in Haltech Radial Blown. Having made a bunch of laps throughout the day, MPW’s Adam Rogash wheeled the ALLSHOW VK out to lay down an arrow-straight 7.89@168mph to push him into second in Haltech Radial Blown class, and third Outright.

The man ahead of Adam in Radial Blown and Overall is Dandy Engines’ Frank Marchese, who also made several passes throughout the day to get a handle on the Swan Hill surface before having a red hot go in literally the last couple of minutes of racing. Despite a big pedal early on and getting off the power after 5.6 seconds, he went through the traps with the ’chutes out to record a 7.79@152mph.

IT WAS a day of wins and losses in Turbosmart Outlaw Blown, as the big dogs of Drag Challenge 2018 barked hard on a challenging Swan Hill track. After being restricted to 1000ft at Calder Park, Outlaw Blown competitors were running on the full quarter-mile in Swan Hill, and they were queued up early to have a crack. 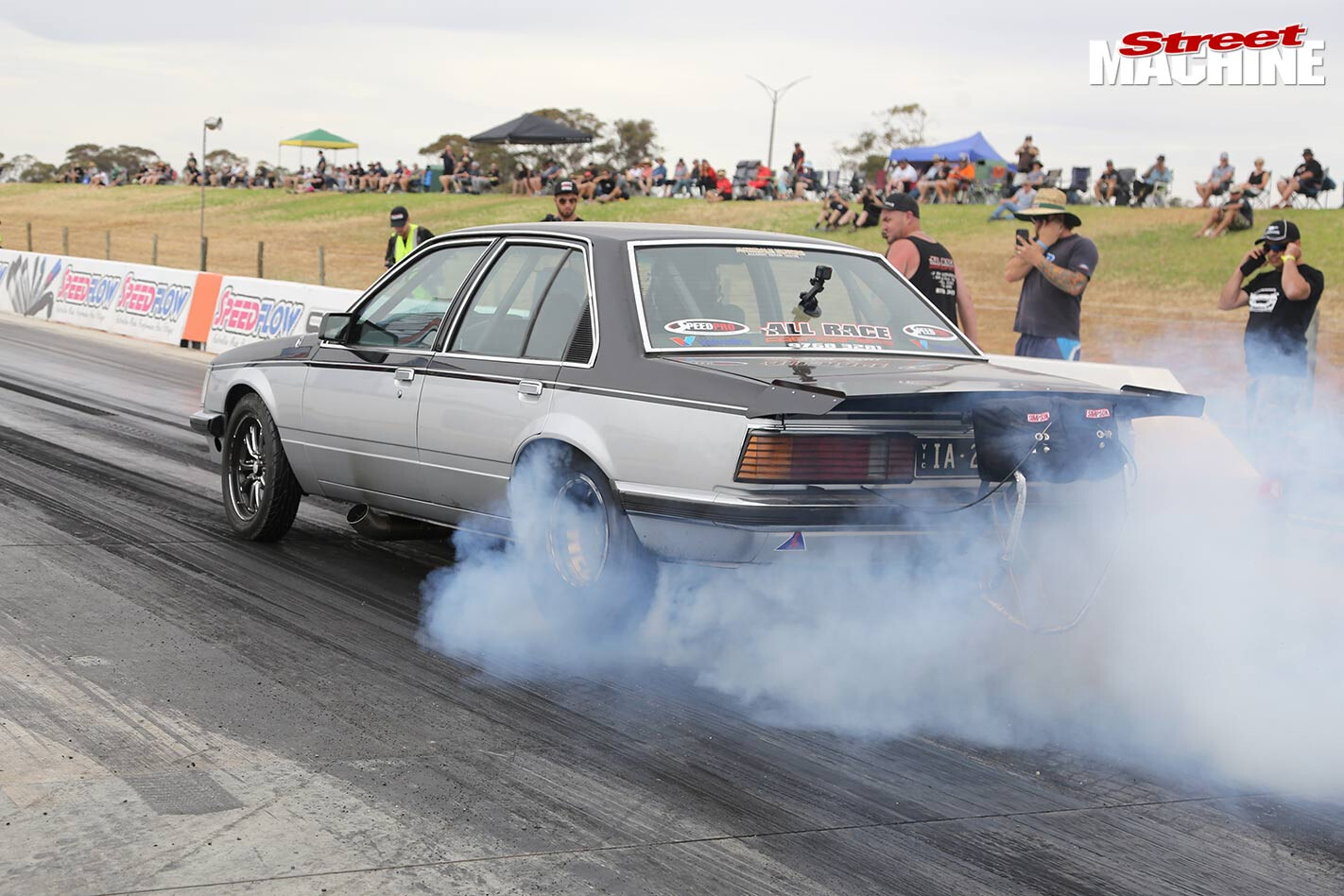 Bubba Medlyn had a day he’d rather forget. After battling all day at Calder to overcome traction issues, he turned up at Swan Hill having fixed them, only to trash another transmission part-way through the day. Although Bubba and the All Race crew investigated fixing it, they had to put up the flag and withdraw, vowing to be back at Swan Hill on Thursday with a repaired car.

You can’t miss John Ricca’s genuine BT1 VL Commodore thanks to its factory Absynth Yellow paintjob, nor the sound of its 3.2-litre RB30/26 combo. After putting in a cracker of a single pass at Calder, it took John a few runs to get dialled at Swan Hill, but he wound up laying down an 8.08@171mph to sit second in Turbosmart Outlaw Blown, and sixth Outright.

Mark Sass also struggled with getting the huge power of his LSXWAR VT Commodore to the ground, with the horse-sized centrifugal blower overpowering the track but putting on a great show. He wound up with a 9.17@153mph to finish third after Day Two. 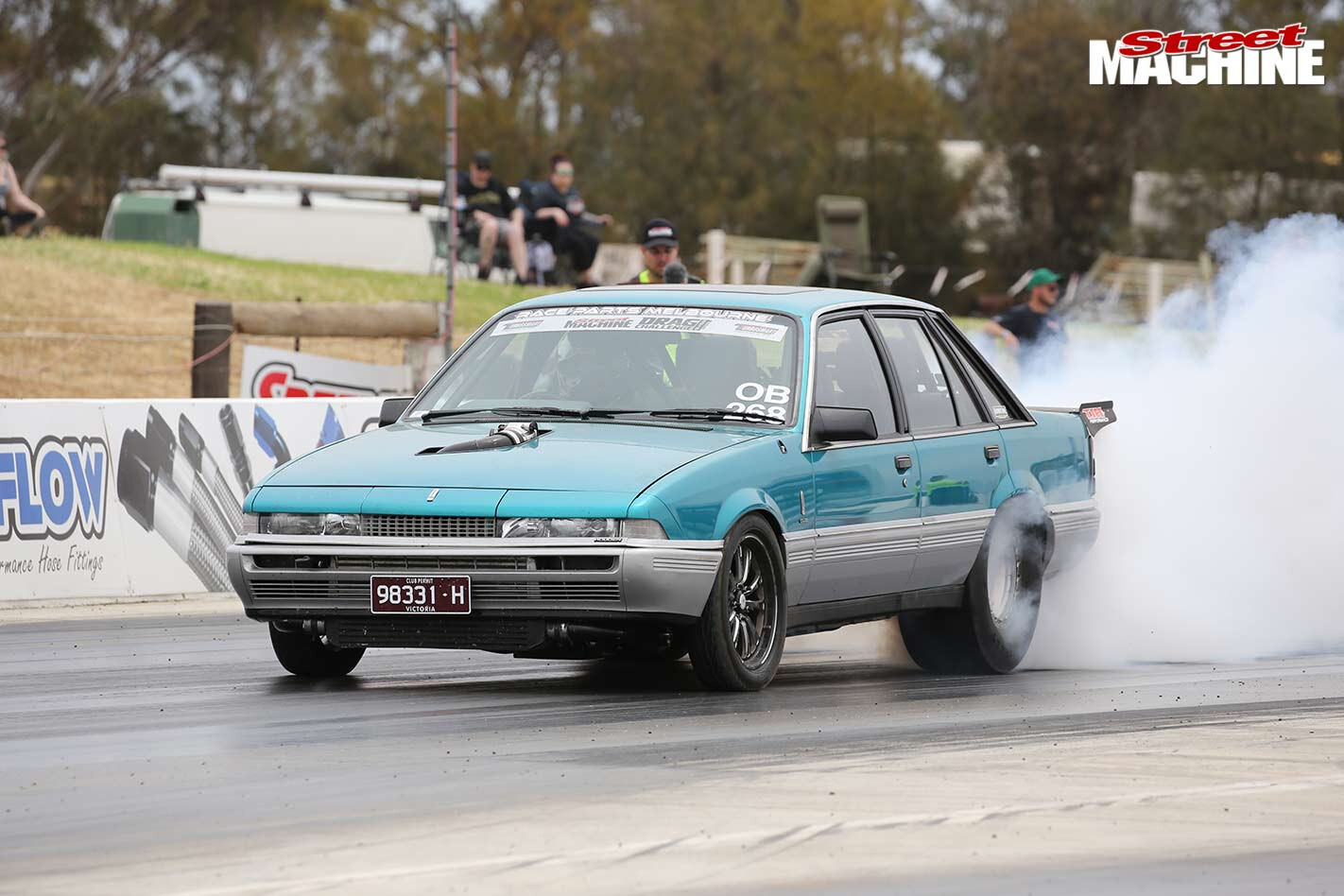 Brendan Cherry in the turbo big-block VL Calais had a tough day, culminating in blown head gaskets knocking him out of the event, but not before pushing out 8.30@160mph.

Day One’s leader Harry Haig put on a show at Swan Hill by getting the front of his Shonky HQ SS really light off the line. He wound up blasting everyone away with a 7.69@182mph after trying to squeeze a bit too much juice from the Swan Hill orange early on. “The first pass was too spicy for this track,” Harry said. “We had a great drive up last night, although it was a bit hot.” WHAT a difference a day makes! Mark Clifford was Day One’s leader in Tuff Mounts Radial Aspirated, but was out of the running last night after he found water in the oil after his second and quickest run. He’d only just freshened up the donk, pouring a decent amount of his hard-earned into the Hemi, but he’s adamant he’ll be back next year.

With the small class suffering two losses, it was down to 10 competitors on Day Two. All-motor entrants have power on tap all of the time, so the chance of breaking something is so much higher.

Mark ‘Bushy’ Busscher in his HQ One Tonner pumped out the quickest quarter of the class with a strong and straight 9.93@133mph. But it wasn’t enough to beat the cumulative total of current class leader Daniel Cassar in his ’32 coupe. Daniel couldn’t get a nine at Swan Hill, running 10.01@130mph after chasing traction loss at half-track.

Paul Wood and his 355ci stroker LJ Torana remains in third having laid down consistent low 10s, with a Day Two best of 10.13@132mph.

Andrew McLellan’s 440ci Dodge developed a strong bottom-end knock and he opted to call it a day rather than lunch the motor. It’s a pity, as he was nine-tenths off Paul Wood at the end of Day Two, but as we well know, anything can happen in Drag Challenge!

SWAN Hill Dragway saw experienced heads take control at the front of the Pacemaker Radial Aspirated field, while others found the fortunes of Drag Challenge didn’t fall their way. 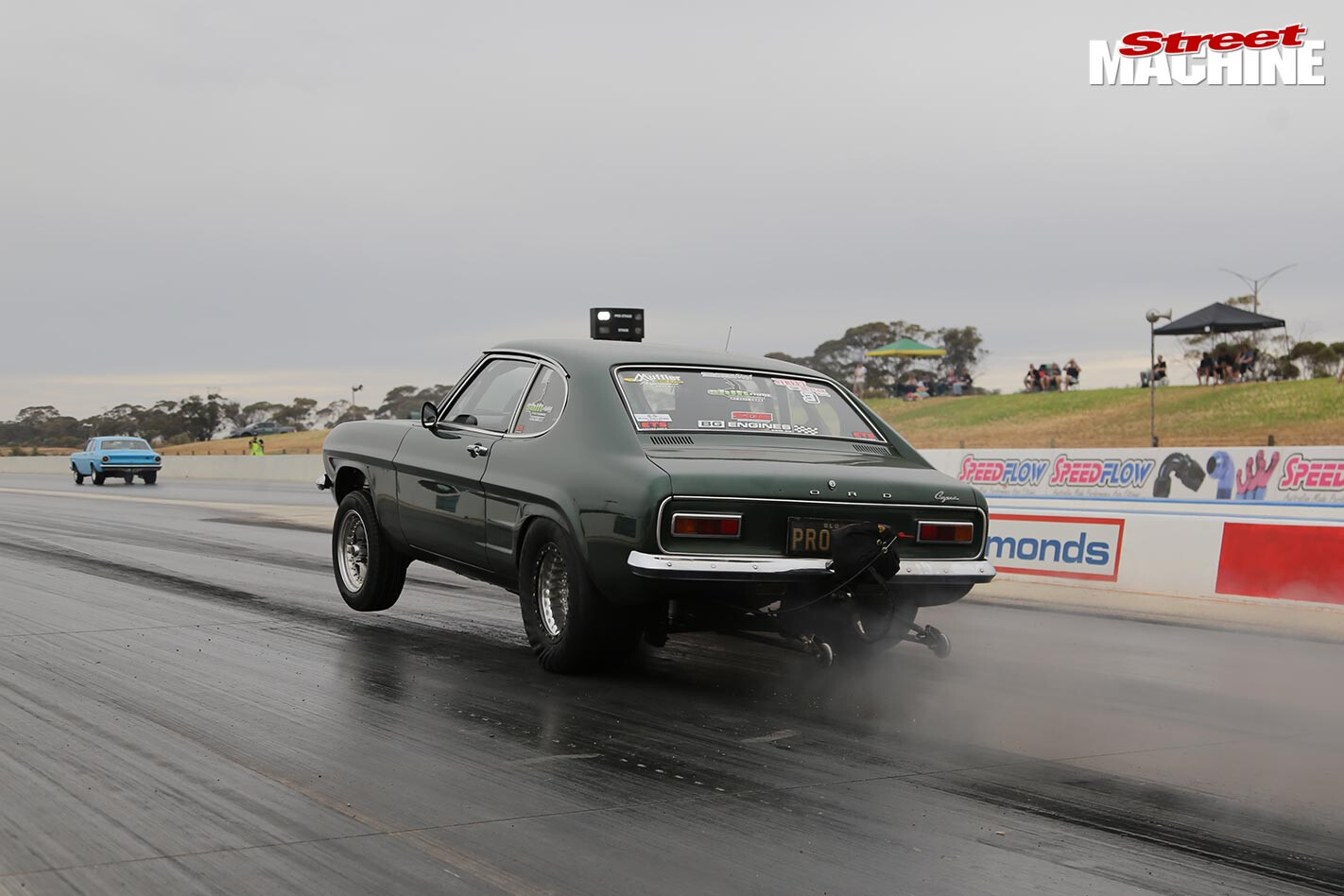 Alon Vella extended his class lead in the Ford Capri, clocking a best of 8.84@153mph to give himself an air gap of two seconds to Dylan McGavigan in the Ford Cortina, who ran a best of 9.95@133mph. Peter Haravitisidis’s XT Falcon jumped from fifth overall to third by the end of the day, recording a staunch 9.9@132mph to stay within a couple of tenths of second place.

Drag Challenge veteran Nathan Ghosn went just shy of cracking into the nines, handing in a best of 10.00@133mph with a suspected head gasket issue.

Keith Hards was again the first of the non-Ford representatives, his Camaro offering up a 10.06@134mph to cement his spot of fifth in class at the end of Day Two. 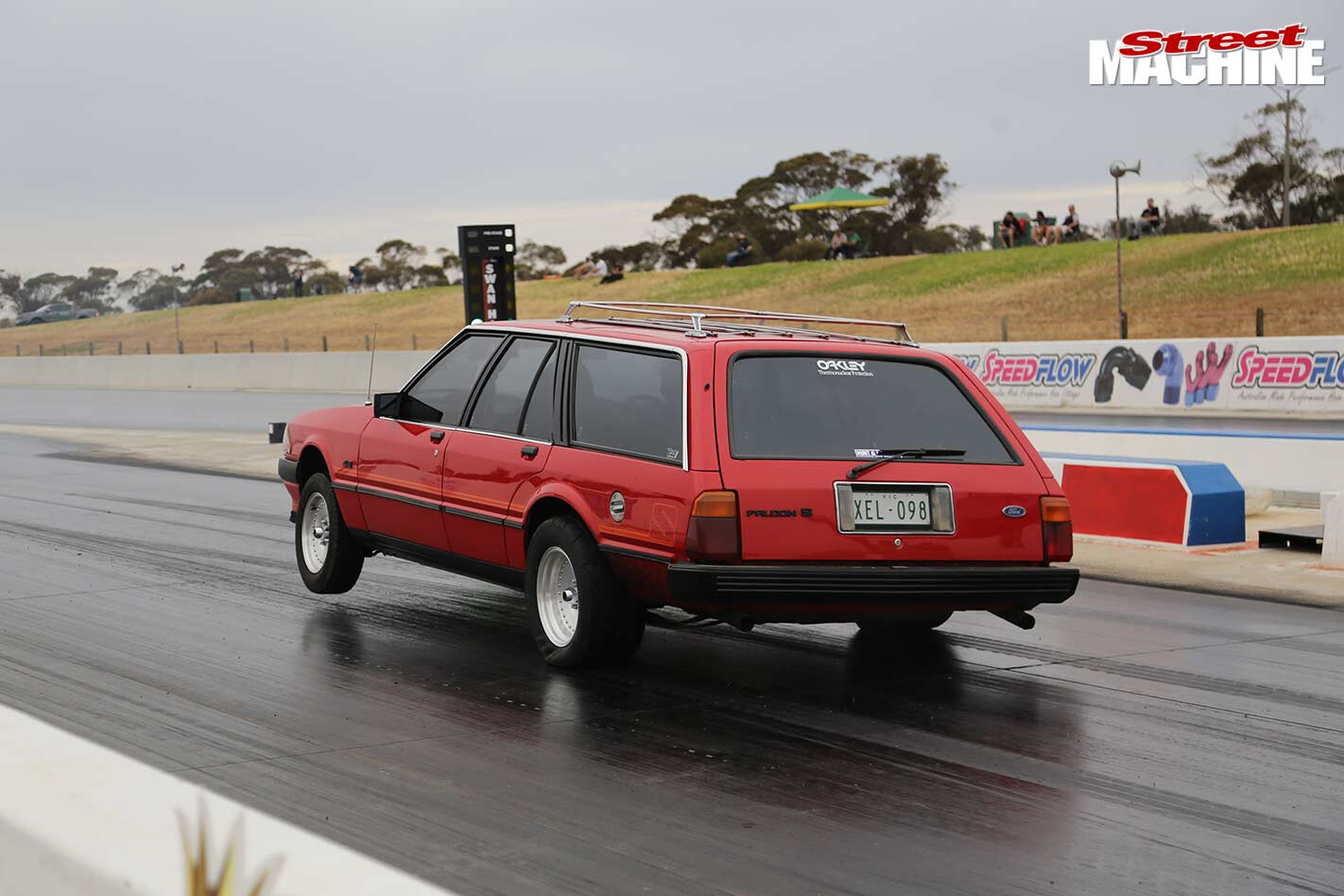 Anthony Burns leapfrogged his way into the Top 10 with an 11.65@116mph, showing that his tried-and-true XE Falcon wagon is covering the DC miles beautifully, only carrying an Esky and a single crate of tools.

The DC racing gods weren’t so forgiving for others. Andy Milne’s ’34 Ford ute suffered from a severely bent valve on its first and only pass at Swan Hill, and while they managed to break the beams the car was left waiting patiently at the track for a new set of heads to be driven up overnight from Adelaide.

Rod Jones’s old-school Ford hot rod blew the diff centre on his only run of the day. Luckily a replacement was found in Mildura, but the car had to wait in the Swan Hill pits and failed to make a successful pass.

Casualties for Day Two included Wayne May’s Mk1 Ford Escort, which lost a rear wheel bearing on the road to Swan Hill, resulting in a minor fire in the rear of the car that meant Wayne’s week was over. Joe Cremen’s LX Torana also failed to make a pass at Swan Hill before withdrawing from the event.

GREG Richards and his Ford Fairlane laid down K&N DYO’s quickest ET on Day One of Drag Challenge, but Monday’s Calder Park times (and the Top 10 list) were really just a baseline for entrants to work off in the quest for consistent ETs.

At Swan Hill it was Rockhampton’s Zaaron Titmarsh and his AU Fairmont wagon that ended up topping the list. Like many other DC participants, Zaaron had a hard thrash getting his 363-cube Windsor V8-powered wagon ready for the event – he had to dump his EFI for a carby at the last minute – but his spread of times over the two days (12.405 at Calder and 12.401 at Swan Hill, he reckons) demonstrate just how super-sharp you need to be for success in DYO. Second in DYO after Day Two was Paul Topping in a Magnuson-charged VF HSV ClubSport, with Darren Parker in third place in his VF SS Sportwagon.

There was disappointment – in fact more like devastation – for Drag Challenge regular Kim Smith and her bright red HSV Maloo; she left pieces of piston in the tyre-warming area when something between the supercharger and the sump escaped.

Day Three’s action is at Sunset Strip – an eighth-mile strip just outside the Murray River town of Mildura. We’ll bring you all the action via whichcar.com.au/streetmachine and Street Machine’s social channels, so stay in the loop!