While the seven and eight-second cars tend to hog the headlines at Street Machine Drag Challenge, the guys and girls at the pointy end of the Tuff Mounts Dial Your Own handicap class have to work just as hard. This year’s event had some formidable footbrake racers in the competition, including last year’s DYO winner Alysha Teale in her HQ Holden, John Kerr in his Mercury and Carl Taylor in his ’62 Chev bubbletop. But the man who finished on top was Benny Phillips in his green HK wagon. Ben is no newbie himself, and this year took out the 2016 Top Sportsman Championship at Hidden Valley Raceway in NT in his strip-only Torana. While Ben calls Portland in Victoria home, he has been working in Darwin FIFO-style, building a liquefied natural gas export facility. Ben bought his Drag Challenge carriage a couple of years ago for street duties, and while the wagon is not quite so animalistic as the Torana, it is still plenty stout. 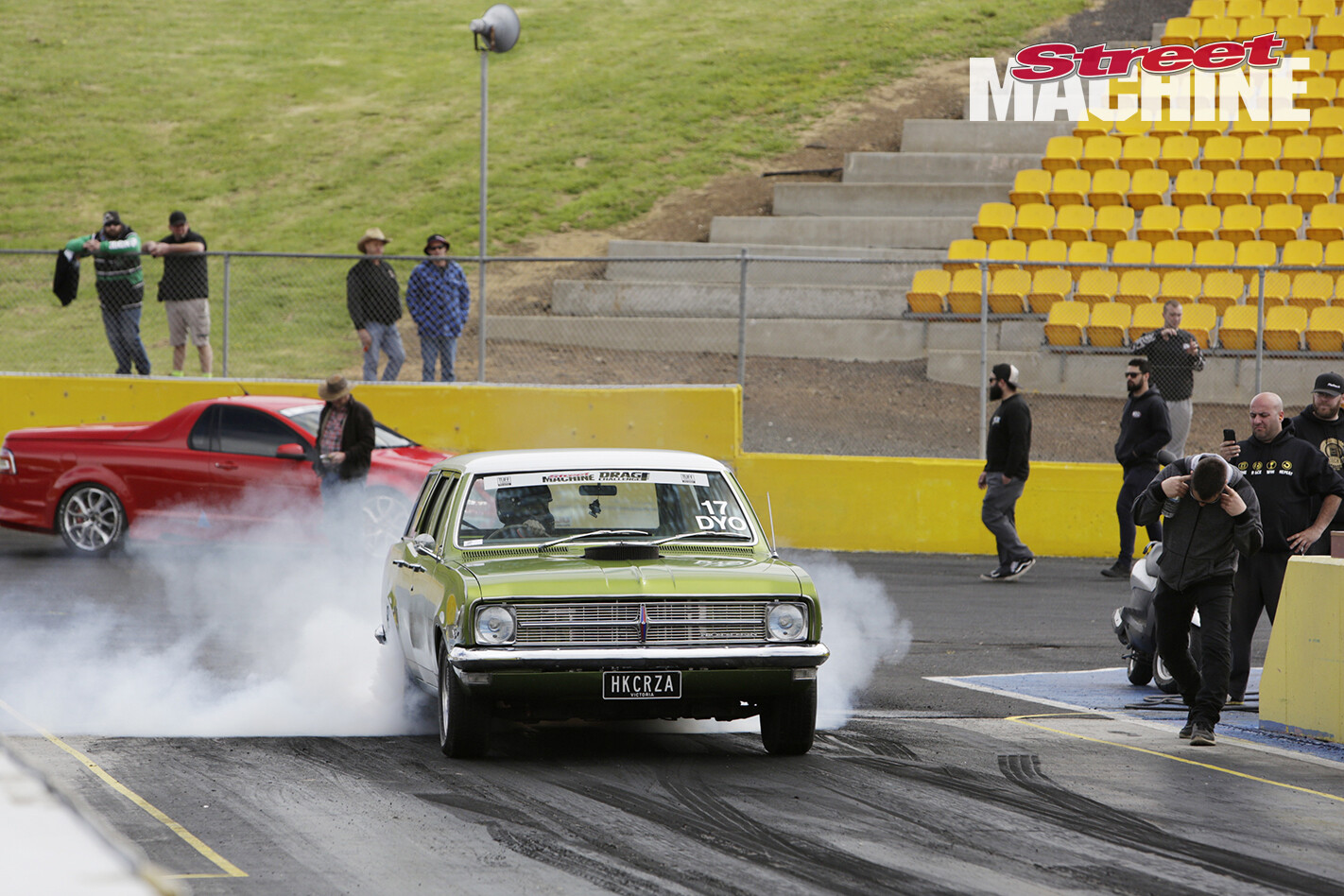 “It had the motor in it, but it had a lot of stuff not complete,” Ben explained. The motor was probably the jewel in the deal: a Shafiroff-built small-block based on a Dart Little M block assembled with AFR alloy heads, Callies crank and rods, and Mahle pistons. With all those good bits, the cube count ends up at 434ci and it breathes with a Quick Fuel 950 carb. On the mouse-wheel, the US-assembled engine delivered 638hp. Fuel? Nothing but pump 98-octane. Locally made Castle Headers pipes got the engine into the car and the remainder of the system is a cackling dual three-inch system. The drivetrain is a manualised Powerglide with a 4000rpm converter and a nine-inch with a Detroit Locker LSD and 4.11 diff gears. Ben races on 255/60/15 Mickey Thompson ET Streets. “Yeah, I’ve driven it to Calder, run a 10.6 and driven home!” he said of his HK’s overall performance. “Actually, my Land Cruiser is up in Darwin, so I’ve been using this as something of a daily, down to the shops and back, when I’ve been back in Portland!”

The tan re-trimmed stock-style interior – including a bench front seat – makes the HK wagon totally worthy of its number plates and plenty comfy for Dean Cleary and Damien McCurdy, who were travelling buddies, pit crew and drinking buddies for the duration of Drag Challenge. 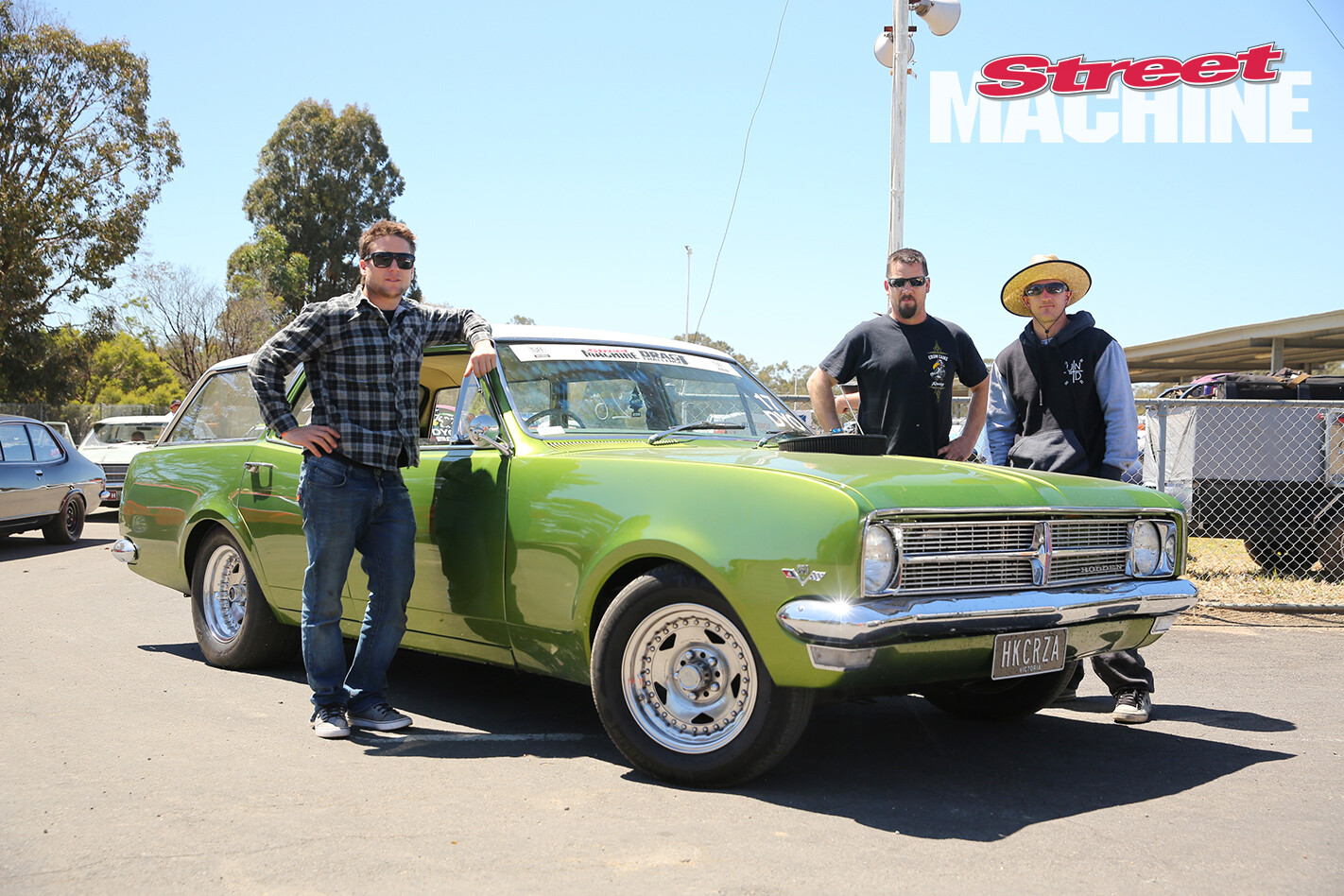 “But we want consistency for this [event],” Ben told us in the paddock at Mildura. “It ran a 10.96 at Calder on the first day and backed it up with a 10.96 at Heathcote, so the tactic seems to be working. Actually, we were going too quick, so we’re leaving the exhaust on and racing it in full street trim. I found that changing shift revs by even just 100rpm was having an impact – it will affect your times one way or another.”

Yes, that was a tactic that worked: Ben managed to keep his mighty HK within six-thousandths of a second all week, at Drag Challenge’s five-tracks-in-five-days format, handing him a very well-deserved win for the DYO class! “This is the most enjoyable and relaxing event I’ve been involved with; we had a wow of a time!” Ben enthused. “The car is reliable – I only broke one drive belt all week – and consistent, and it’s fun.

“I’ll be back next year to do it all again!”