WHILE 2020 has wiped out plenty of sporting events, nothing could keep the hardcore Street Machine Drag Challenge fans down as 129 entrants turned up to try their hand at Australia’s greatest street car competition. Despite border restriction shenanigans preventing Victorians from making the trip north, there were still plenty of stout cars fronting at Willowbank on Friday for Day One.

The day started off cool and overcast but the sun soon appeared, and by the time racing started shortly after 1pm, the Willowbank tar was cooking. The baking-hot weather played havoc with some of the faster forced-induction cars as they struggled to put the power down, but there were some who had absolute belters of days.

Topping the day’s sheets both Overall and in Haltech Radial Blown, Ben Vlekken’s VH Commodore wagon was the only car to run in the sevens, with a 7.80@172mph on his second pass. “It was very tame,” said Ben afterwards. “It’s a new engine, a 400ci Dart SHP Pro LS built by Jase Cowie from CPE. It uses a GTX55 (turbo) and we only had 26psi in it then, but there is a lot more in it.” Paul Merry in the PSIPREM HT Premier had sat at the bottom of the overall Top 10 until late in the day when he threw down an 8.27@162mph and an 8.12@174mph to jump into second in Haltech Radial Blown and second Overall. However, the day didn’t end positively as the twin-turbo 377ci LSX sedan pulled up short on its last pass having lost turbo.

The 2018 DCW Champion and ’19 runner-up, Mark Van Der Togt, pedalled his twin-turbo XW Futura to a blistering 8.16@169mph, finishing the day third in Haltech Radial Blown and Overall . Having run as quick as 7.80s, the 393ci SBF-powered sedan will be one to watch on Sunday.

Benny Neal had knocked out an 8.53@165mph in his two-time Hot Rod Drag Week-going Barra-powered ’85 Toyota Cresta to lead the Speed Pro Six-Cylinder class and sit fourth Overall. He’d driven the 275-shod sedan 1000km up the coast from the Southern Highlands, fighting overheating issues due to crud in the radiator that he cleaned out with Draino on Thursday night. 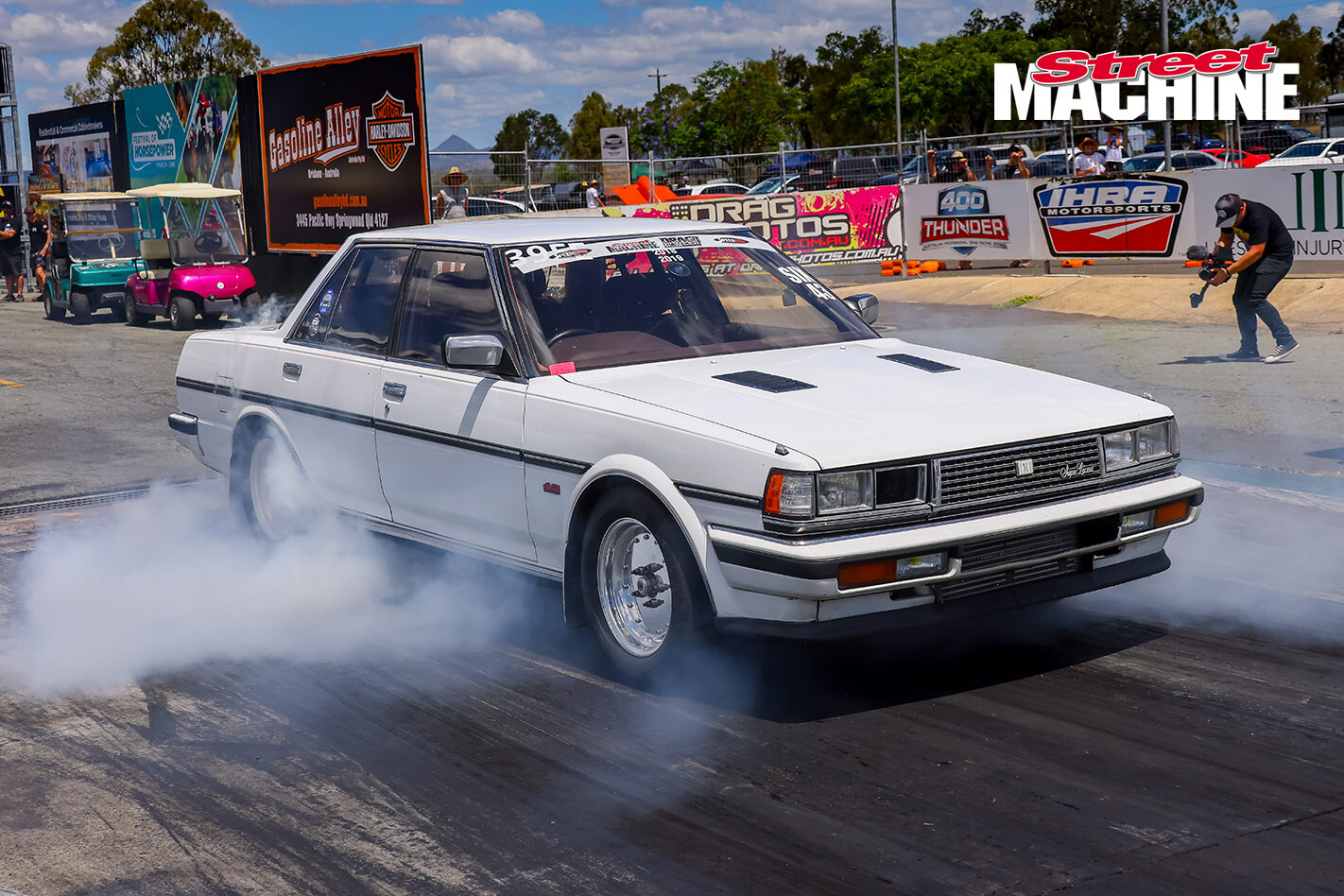 Juan Kudnig’s turbo, supercharged and nitrous-assisted HT Kingswood busted out a pair of mid-eight-second passes, with the Vortech-blown, boot-mounted turbocharged four-door running an 8.73@160mph and then an 8.63@159mph to sit in third place in Haltech Radial Blown and fifth Overall.

Running in Haltech Radial Blown, Trent Brimble’s turbo-LS VL sedan, VILLIN, lapped all day with mixed success but ran a couple of mid-eights with a Day One PB of 8.63@161mph to sit in fifth Overall and fourth in class. Trent seemed to have a dial on the super-clean sedan by the end of the day and was promising quick times for Sunday.

Benny Paganoni overcame some teething issues with his Fox-body Mustang to run an 8.91@158mph, which put him second in Speed Pro Six-Cylinder class and ninth Overall. The Barra-powered Mustang was brought back to Australia, having been built in the USA by Benny Neal, Alan “Turbo Yoda” Butler and Ben “Woody” Wood as part of YouTube channel The Skid Factory. While it has run as quick as 8.20 in America, Paga’s day started with a couple of aborted passes before he got it together on his third and final pass.

Ben Taylor has brought his turbo-LS SS Camaro to a bunch of DC events over the years, and cracked out an 8.90@156mph on Day One to land in the Top 10 Overall. With a new, 400ci donk and bigger turbo, the combo cranked out over 1300hp at the hubs in the lead-up to DCW.

Steve Micallef had problems cutting out in his big-block Tonner, with the big-inch commercial fighting him all day and preventing him getting a clean lap in. By Friday night he was looking for assistance to load a new tune in his Holley Terminator X ECU so he’d be able to run the numbers we’ve seen from the Tonner at DCs past.

While the blown cars get much of the glory, there are also some seriously tough aspirated cars making this trip. Brodie Olson had his aspirated LX Torana hatch firing like a bullet on Day One, going 9.75@141mph to lead the Tuff Mounts 235 Aspirated list.

Jai Schluter in his aspirated Mustang hauled the mail on Day One with a 9.34@141mph to leave the track in first place in Turbosmart Outlaw Aspirated and in 13th Overall. But the silver coupe was later seen coming back into Willowbank on a tow truck, having thrown a rod out.

The biggest news of all the aspirated cars was Alon Vella, who laid down a mega 8.90@152mph to sit eighth Overall and top of the Pacemaker Headers Radial Aspirated class. The seven-time class-winner stomped his authority all over the aspo engines after struggling to get the 450ci Ford’s grunt down cleanly on his first pass.

Pat O'Shea was also going hard in Radial Aspirated, running a new PB of 9.50 in his stunning XR Falcon.

Rob Huston’s 1975 Dodge D5N had one of the day’s big blow-ups as it ejected the trans in the braking area at 110mph. The turbo, injected 355 Holden-powered pick-up gave Rob an adventure trying to stay off the walls, and it was obvious he was out of DCW.

“When I got out to have a look, the body of the transmission was being dragged along by the shifter cable and the torque convertor was being sort-of kicked along the track by the trans crossmember,” Rob said.

The misadventures didn’t stop on the track, as Rahim Tarr, running in Turbosmart Outlaw Aspirated, had the bonnet of his 434ci XD ute fly up while leaving Willowbank, smashing the windscreen. As we left the track for the night, Rahim was awaiting delivery of a new ’screen.

Andrew Natoli is also out in his killer plastic-powered VK, along with Stephen Hyslop in his UC Torana hatch. However, most of the field made their way to Warwick, via scenic Maroon Dam. Check it out!

(Note: Top 10 list in the video is slightly off, correct here: