VICTORIAN Harry Haig had a huge 2016, and all the time spent planning and preparing for his Hot Rod Drag Week assault in the infamous SS Chevelle meant that his eight-second HQ missed out on some love in the lead-up to Street Machine Drag Challenge. 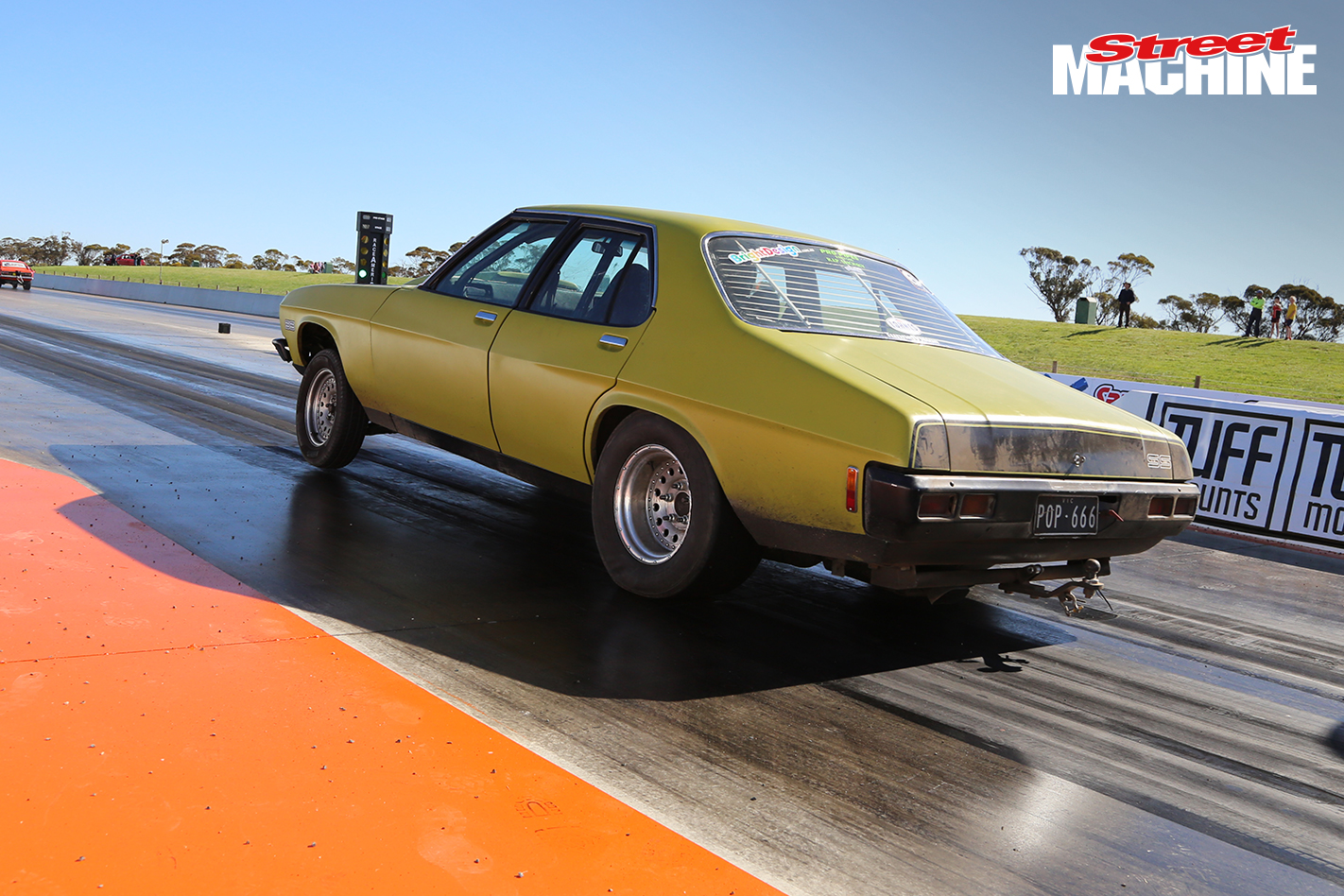 “Basically I dragged it out of the shed,” Harry said. “Since last Drag Challenge all I’ve done is given it a freshen-up before Powercruise Sydney, but doing powerskids up the straight at 8900rpm wasn’t kind to it. I think it might have tweaked a valve.” 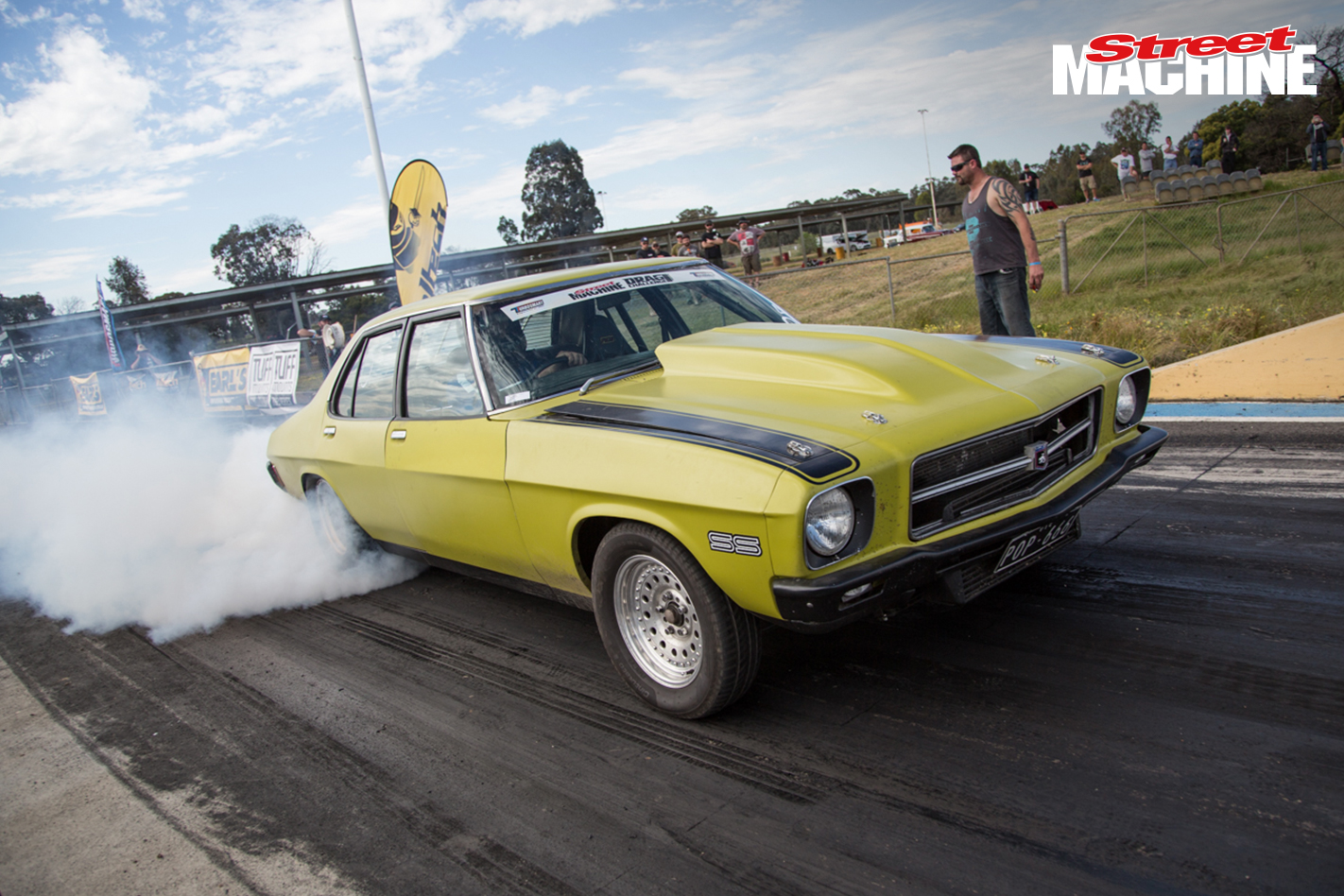 Of course they didn’t know that before Drag Challenge; the preparation consisted of swapping in a new Holley Dominator ECU on the Friday, testing it at Heathcote on the Saturday and then rocking up for scrutineering on Sunday. 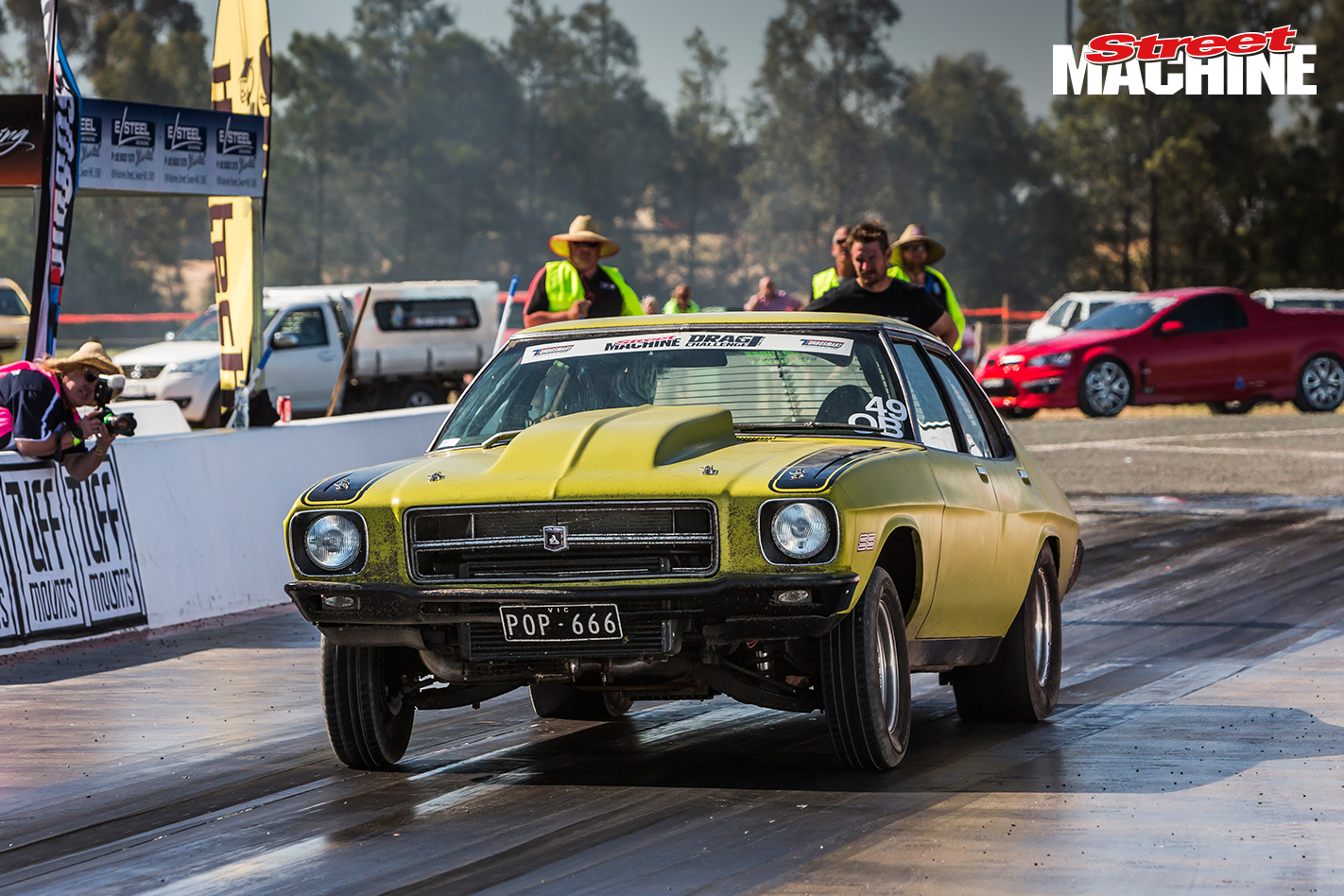 Day One saw the guys chasing a misfire at half-track, which Harry now attributes to a possible bent valve, and they headed to Heathcote with an 8.63 under their belt. An 8.75 at Heathcote showed that things weren’t improving and the guys headed for Mildura – and that’s when shit got serious. 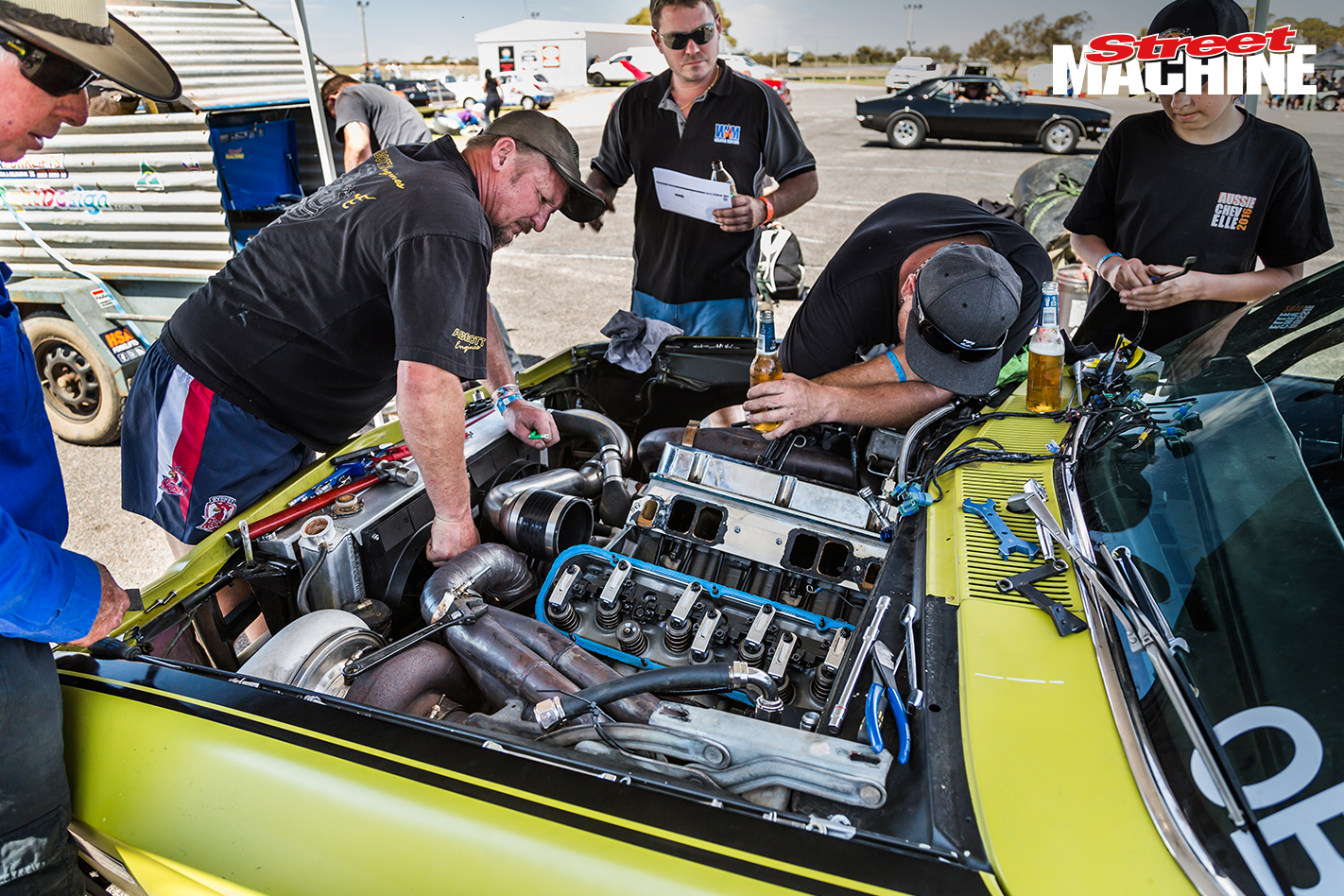 “We struggled on and then a roller lifter ate itself near Sea Lake, so we pulled the rocker and sparkplug, and tied the lifter up out of the way with some fencing wire so it would keep oil pressure,” Harry said. 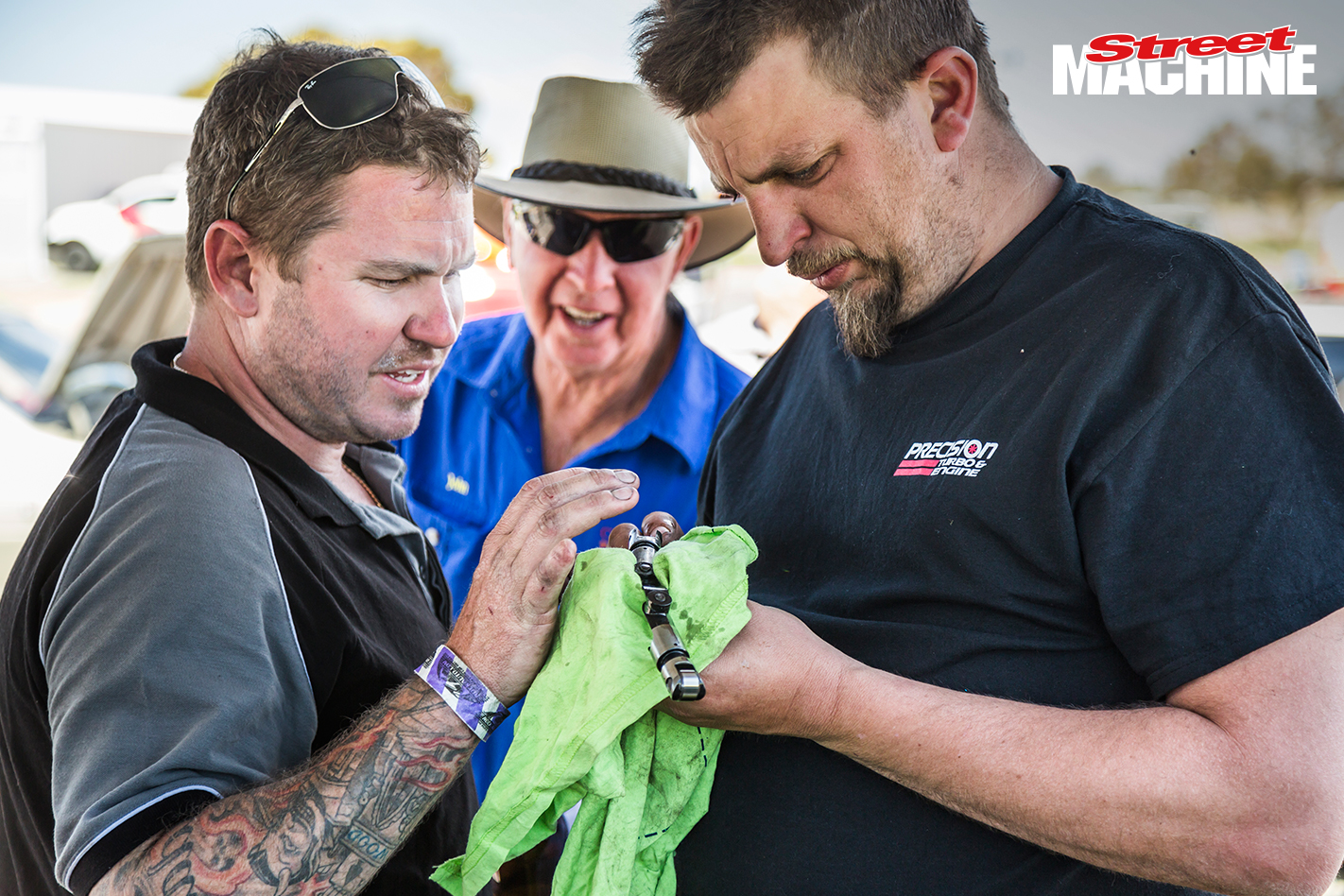 They drove the remaining 190km to Mildura on seven cylinders. With plenty of help from Robby Abbott, they swapped in a new roller lifter for racing, but in the rush to get everything back together, an intercooler pipe was left loose and it popped off and punctured the radiator during the run. 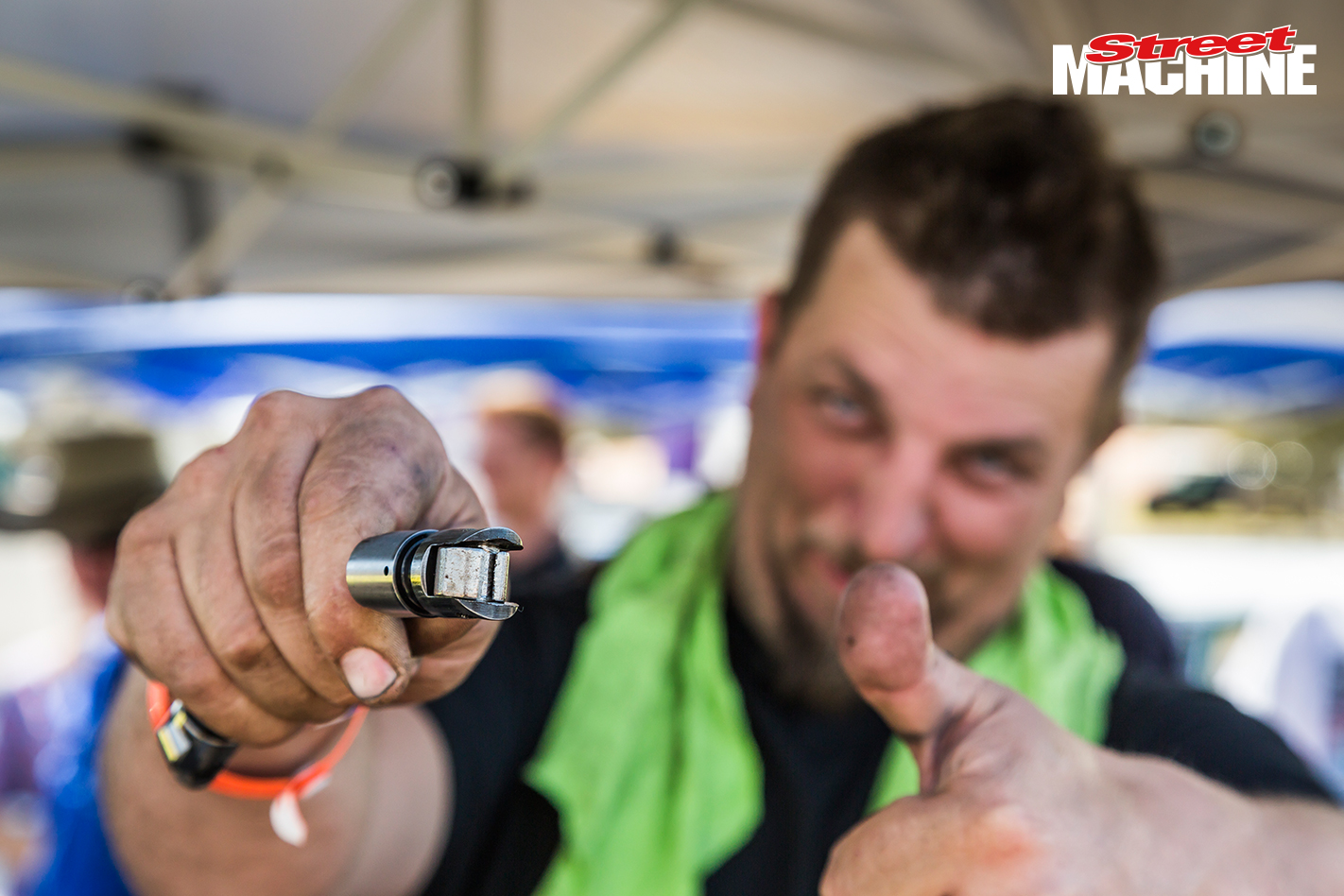 After a quick radiator repair the guys put the call in to Marty at Crow Cams for a new bumpstick and set of lifters to be delivered at Swan Hill. Using the workshop at BT Performance, the guys did the cam and lifter swap, but now the pushrods were too short. They tried some small-block ones to get it back on the road, but the thin pushrods bent like spaghetti. So with a mixed set of pushrods and fingers crossed, Harry headed down the strip – and punched a rod through the sump. 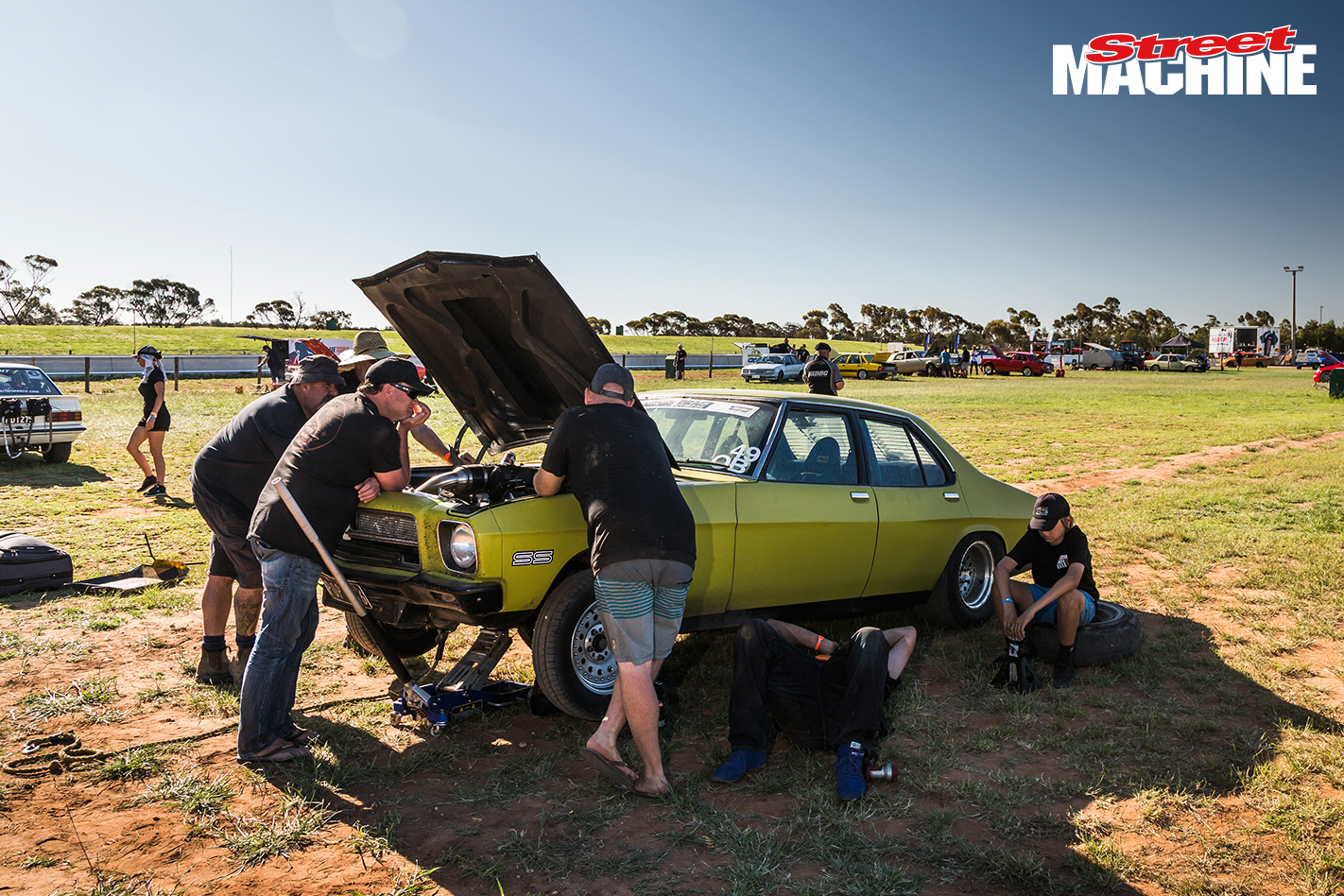 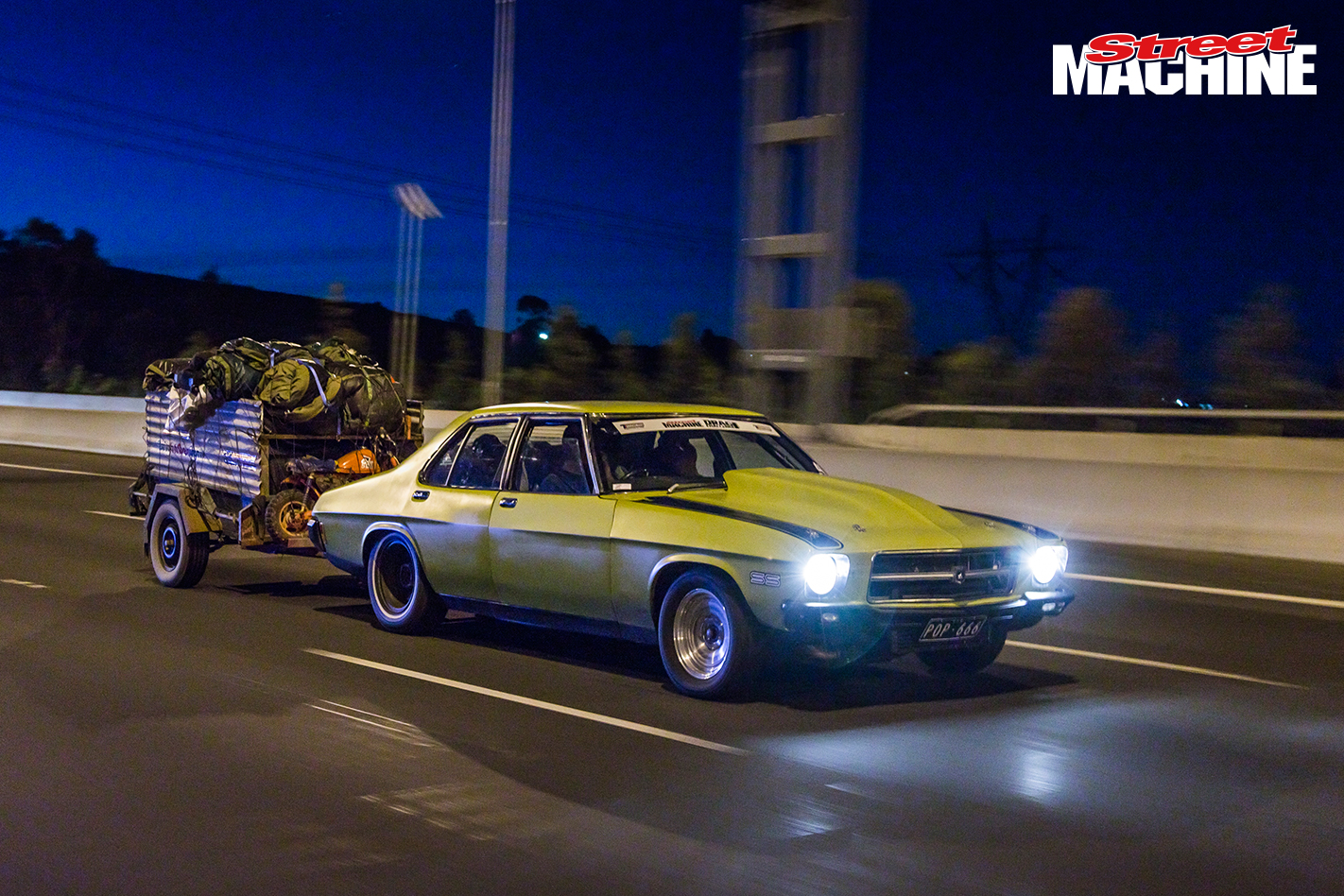 So they put the call out to Facebook and found another piston and rod, but had no way to get it up to Swan Hill. Then a bloke who calls himself the Wollinator volunteered to drive the parts up to Swan Hill overnight. “He got to Swan Hill at 4.20am, had a beer with us and then drove back to Melbourne for work the next day.” 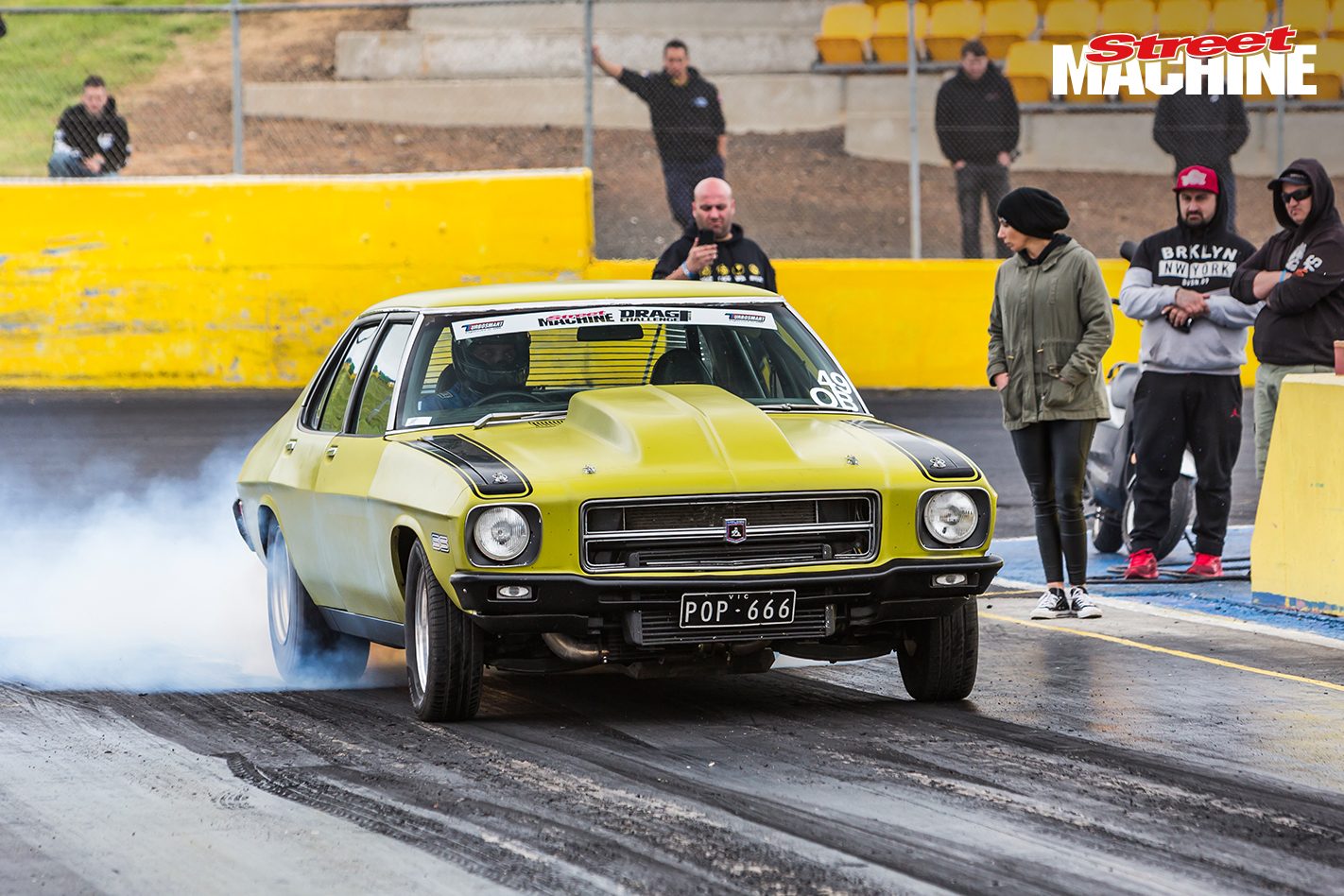 The partial engine pull-down revealed the oil pump had developed a slight crack thanks to the flailing conrod, but the engine still had some oil pressure so they hit the road. However, this story doesn’t have a fairytale ending; the oil pressure disappeared once they got travelling and the engine seized a solid 30km from Calder Park. 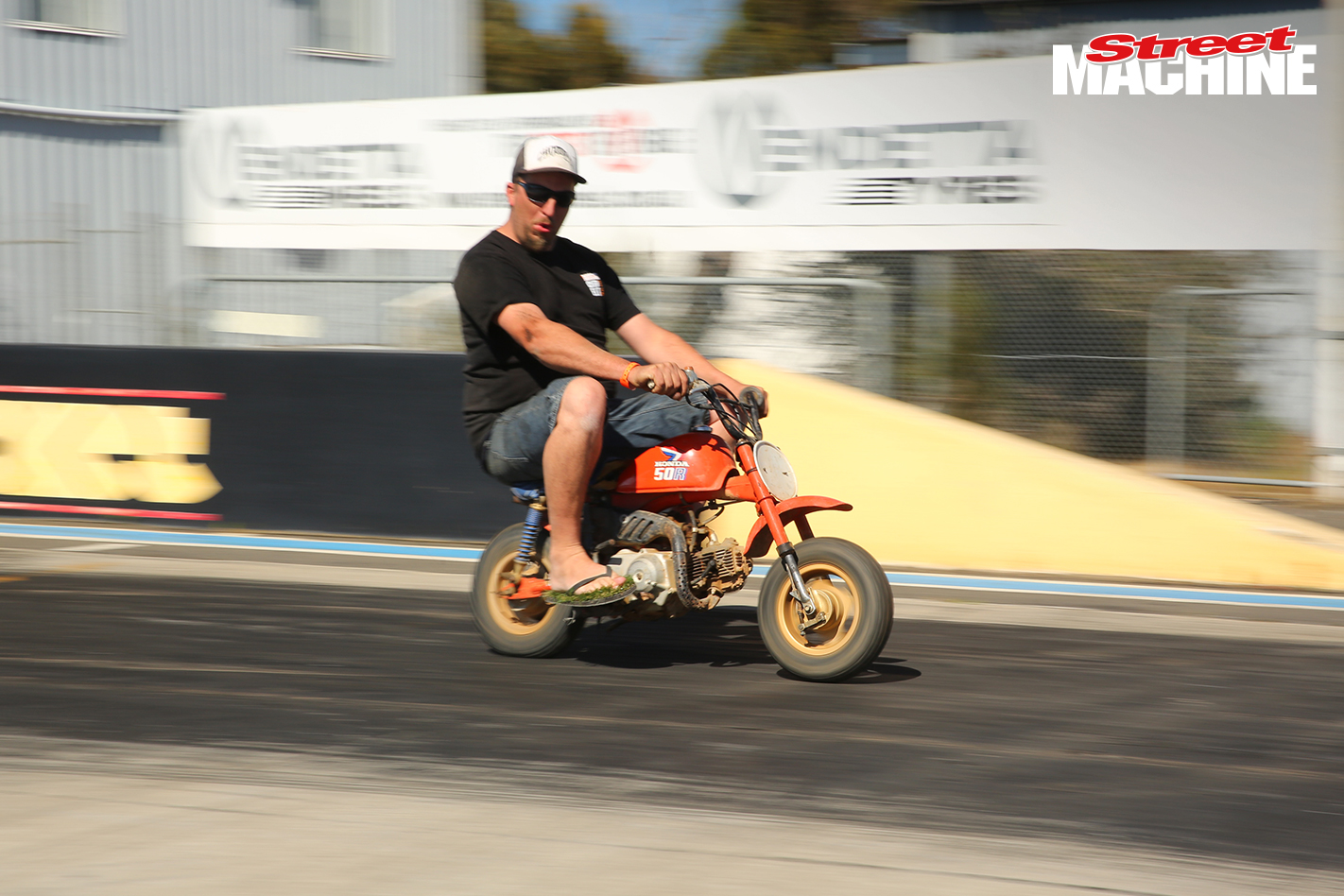 “It was the toughest event I’ve ever done; it made that first year with the Chevelle at Drag Week seem like a trip to the shops,” Harry said. “But it was still awesome to race and cruise with 100 of the toughest cars around. No egos, no fighting, just good times. It was the greatest, coolest thing I’ve ever done with my son Corty too. We’ll be back next year.”