Turbosmart Outlaw Blown is a pretty straightforward class. Any and all forms of forced induction are permitted, through tyres as wide as you like - radials wider than 275 or full slicks are the ticket. For the first time, our overall Drag Challenge winner came from the Turbosmart Outlaw Blown ranks. Though Haltech Radial Blown still rules the roost in terms of competitiveness, this class will undoubtedly grow in future years. 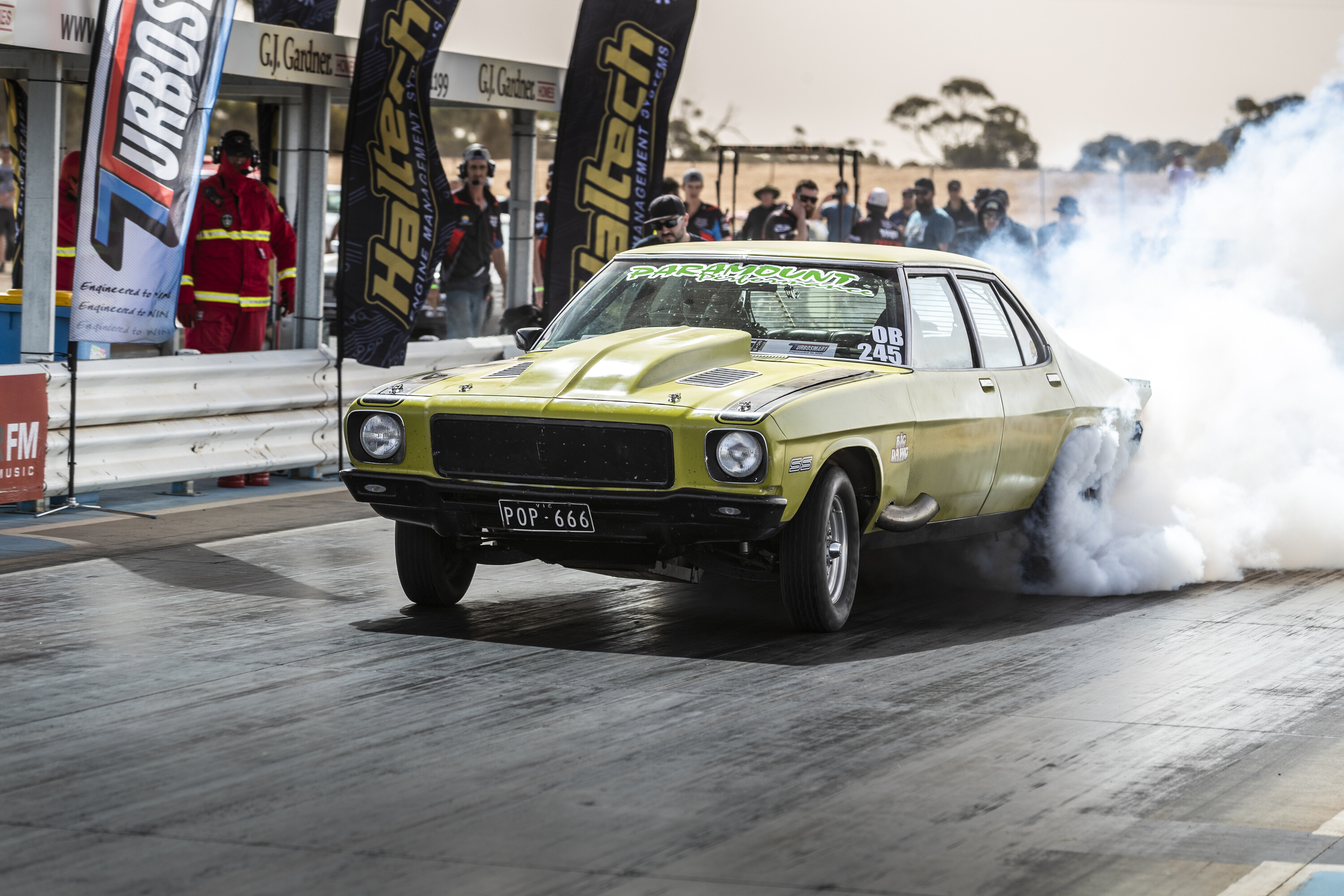 WINNING Turbosmart Outlaw Blown for the second year in a row, along with taking out the overall win, Harry Haig’s Pops HQ was the only car to run a four-second pass over the eighth-mile all week. While his 7.49@186mph on Day Five was rapid, Harry’s ability to get his 540ci twin-turbo fat-block HQ down the eighth is really where he won DC19.

ONE of our Drag Challenge OGs, Brendan Cherry got a handle on his big-tyre, big-block VL Calais to not only finish second in Turbosmart Outlaw Blown class but second outright as well. His Day Five run of 7.61@186mph was a PB for the car, which is now for sale as Brendan has big plans for an even wilder car for Drag Challenge 2021.

ALL-paw grip and over 1200hp at the hubs from a turbocharged, stroked Nissan three-litre six meant Jason Ruby was one to watch in Turbosmart Outlaw Blown this year. Running a best time of 8.33@165mph the custom adjustable all-wheel-drive system Jason built for his Nissan seemed to handle the torture-test perfectly well.

AFTER bringing another Capri to DC18 Mark brought his big-tyre RUNS7S Capri back in 2019, with up to 400hp worth of gas for the 550ci big-block Chev. Running without a trailer, Mark and his mate Darby managed to run a best time of 8.46@162mph to finish just off the podium in Turbosmart Outlaw Blown, and were the fastest without a trailer.

CANBERRA’S Jake Edwards didn’t change much on his legendary LH Torana for 2019, retaining the HQ-headed Holden 355. Jake had a killer week in Turbosmart Outlaw Blown, not even being phased when the turbo on the big-tyre Torrie swallowed a piece of wiring loom, chipping the blades. In 2019 the Summernats Horsepower Heroes legend ran a best time of 8.95@148mph.

TAMANIAN Marcus Howe brought his nitrous-snorting Dart Windsor 434ci X-Dub Falcon back across Bass Straight for another tilt at Turbosmart Outlaw Blown in 2019. Despite struggling to get the Silver Fox four-door to hook up cleanly, Marcus still nailed a best run of 9.55@146mph to finish the week seventh in class.

WITH a VMP 2300cc positive-displacement blower perched atop the five-litre Coyote in his 2017 Mustang, Todd O’Leary finished Drag Challenge 2019 in eighth spot in Turbosmart Outlaw Blown class. Claimed to be the fastest blown S550 Mustang in Oz, Todd’s Grabber Blue pony car ran as quickly as 9.78@114mph during Drag Challenge.

TAKING a brand-new car on Drag Challenge might be considered cheating by some, but we were dead-keen to see how drag racing newbie and WhichCar.com.au journo Dan Gardner would do. With a pair of 305-wide drag radials on the back the 640hp factory-blown LT4 Camaro ran an astonishing 11.20@127mph on Dan’s second-ever pass down a drag strip, finishing the week ninth in Turbosmart Outlaw Blown.

JUST a fortnight out from Drag Challenge Bruce Howie’s 347ci Windsor cried enough and forced him to throw together a stock-bottom-end 302 he had laying around, though he kept the nitrous and Jerico four-speed manual. His 11.06@124mph on Day Five was enough to finish as the Fastest Stick-Shift and 10th in Turbosmart Outlaw Blown.

WE WEREN’T expecting to see John Whyte’s ’50 Chev sedan light up the Calder Park timing boards with an 11.32@128mph. Hiding under the big more-door’s bonnet is a cammed 5.7-litre LS with worked heads, now wearing a 42mm turbo that John’s wife gave him as a Christmas present. Making a heady 450rwhp the Chev packs coilovers at each corner among significant chassis upgrades as John uses it as his daily.

ADELAIDE’S Con Rozokos and his mates from Junket Racing were gifted their HJ Statesman as an abandoned project, putting together a stock-bottom-end turbo LS drivetrain for it with what they had laying around or what they could find on eBay. The Drag Challenge newbies nailed their goal of getting the barge into the 11s on Day Five, running 11.66@119mph before driving it home in style.