THREE titles in three attempts ain’t no fluke. Quentin Feast didn’t compete in Drag Challenge 2016 but he came back with a vengeance this year, with a new turbo and gearbox combo. The GMPWR Torana took the lead after Day One and was never headed. On Day Three it ran the event’s only seven-second pass, with a 7.99@174mph. This nabbed him his first Drag Challenge red hat for dipping under eight seconds, the only person to do so in 2017. Back in Adelaide for the final day, Quentin’s 8.00 bested nearest rival Mark Drew’s 8.20 and he clinched his most emphatic Drag Challenge victory yet. “We ran up to 24psi and that wasn’t until the second half of the track,” said Quentin. “At 21psi it made 1300hp and pulled the dyno out of the ground. The new turbos are good for 2000hp. We’re on top of our data-logging so we know where everything is in its efficiency range, and it makes wicked low-down torque.” 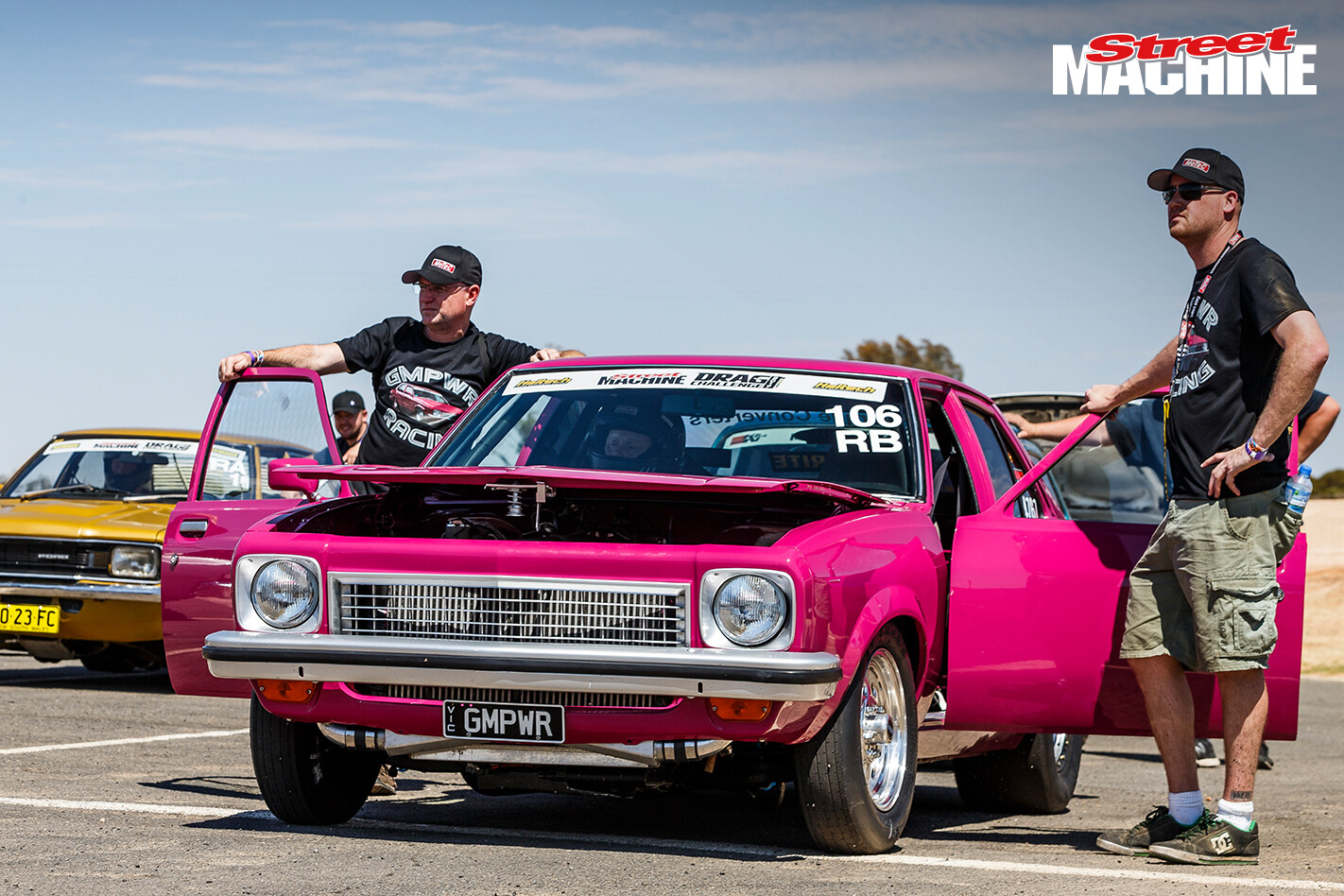 While Quentin didn’t face many issues during the week, his lead-up could best be described as chaotic. While the basic 404ci LQ9-based short motor is largely the same, just refreshed, the Torry now wears LS3 heads ported by Nathan Higgins and a pair of slightly larger 67mm turbos plumbed by pipework that Quentin did at home. The LH has also moved to a TH400 three-speed auto built by Paul Rogers Performance Transmissions. “We pretty much rebuilt the car in eight weeks before Drag Challenge, including doing the engine, putting in a new gearbox, changing the turbos, and all new pipework,” explained Quentin. “The first and only testing at Calder it went 7.75@178mph in full street trim on pump United E85. I got home, pulled the oil filter and it was full of metal from the thrust bearing. I had to strip it and Lou Lucida from Dandy Engines did the Torrington bearing in two days the week before Drag Challenge! 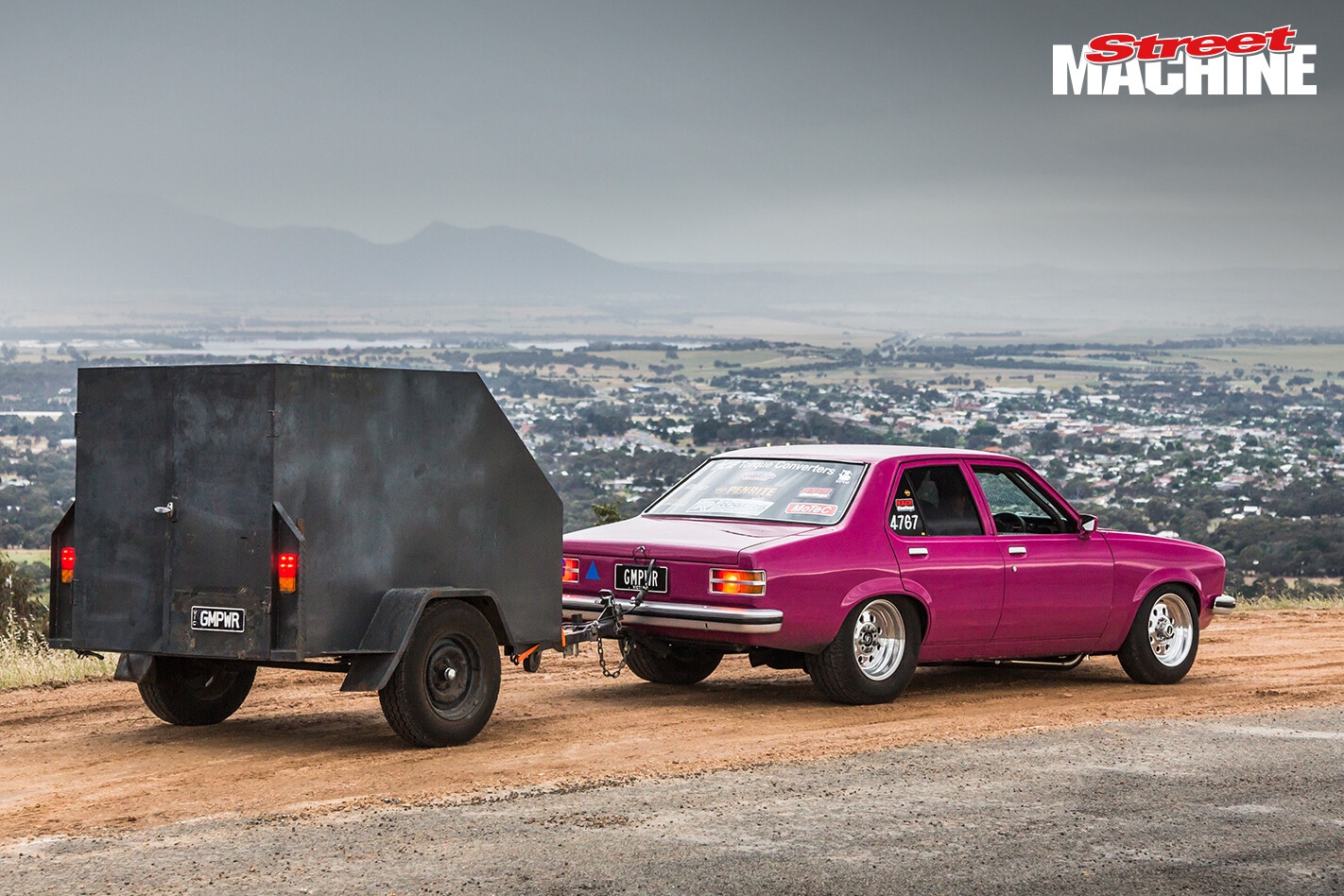 “We had a couple of minor problems on the road. Firstly, leaving Adelaide, the back door of the trailer opened as we were going down the freeway. We had lost (tuner) Mark McCoy’s bag, and a spare transmission worth $12,000 was about to fall out. Plus it was so hot I melted my thong on the rollcage.”

Apart from the obligatory track prep, the crew didn’t lay a spanner on the car from Monday to Friday.

“I checked the oil every day, but that’s it,” said Quentin. “We’ve been doing this a few years now so we tried to be well-prepared. We did the first two days full-time on E85 as it has a great cooling effect, but the rest of the trip we ran 91 RON pump juice. We were getting 20 litres per 100km from it, which is not bad considering the weight with a loaded trailer and no over-driven gear.”

And what’s next for Australia’s Fastest Street Car? Going quicker, of course! “I couldn’t have done it without the help of my mates who crewed, tuner Mark McCoy (MoTec), long-term mate Michael Trewin, and Paul Rogers from Paul Rogers Performance Transmissions. I also have to thank Joe Salmon from JC Engines who does all my engine machining and Clint Dalton from Dalton Racing, Mark and Phil from MoTec, Pete and Mick from Demak Timber, Tony and the team from Bob Jane, Lee from TCE Converters, Ryan at Race Coatings, Nathan Higgins from HRD for porting the heads, Lou at Dandy Engines for the Torrington bearing conversion in two days, Shannon and the team from Tankar Panel Services for the awesome engine bay, Penrite Oil, Luke from Modern Visual, Pete from Casey Automotive for the late-night dyno hours, Kav Auto, Speed Pro, Coxy, Jacob, Burko, Grant and everyone who helped get us there”