ENTERING a large, orange brick into Street Machine Drag Challenge may not be the best idea – there’s no aerodynamics. But this 1977 HZ Sandman pano is the fastest car South Australian Shane Dale and his wife Carly own, and has done the eighth-mile dozens of times, so they thought: ‘Why the heck not?’

“I built the Sandman – yes, it’s genuine; no, it’s not stock – as a show car, then a street-legal street ’n’ strip car,” Shane explains. “Thing is, we hadn’t really driven long-distance in it until Drag Challenge.” Under the steel reverse-cowl hood is a ZZ502ci big-block Chev backed by a TH400 and 3000 Dominator stall, with a nodular nine-inch packed with 3.55s. “It’s all fairly old-school; only the fuel pump and thermos are electric,” Shane says. “No data logger, nothing fancy or that’s helpful whatsoever!”

Shane’s main goal was simply to complete the event. 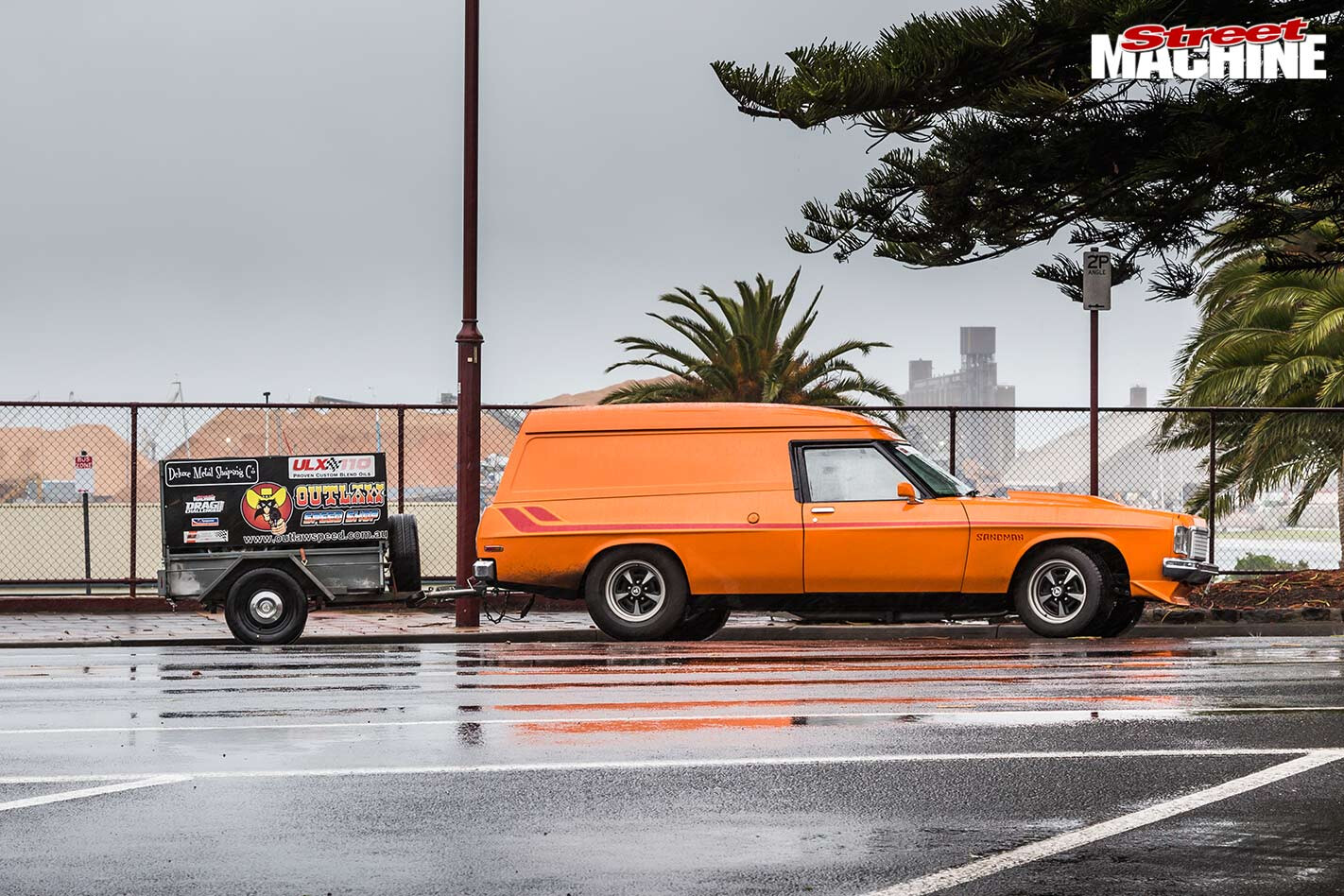 “If we could get it to each track then I’d do my best in K&N Dial Your Own, but the highway drive was always on my mind,” he says. “We had ignition issues the entire time, so we knew each drive would be slow and there’d be roadside stops. Knowing this, I only did one run at Swan Hill, recording my worst time of 12.437 seconds, 0.133 off my PB and dial-in of 12.304.

“Even throwing away Swan Hill, I came 13th in the class, which I’m pretty happy about. I know that I was definitely the fastest orange panel van out there,” he laughs. Shane works for himself at Deluxe Metal Shaping Co., so had to prep the pano late at night and didn’t have a lot of money to throw at it. “We did basic things, like using massive 28.75-inch tyres – that we already owned – to get the revs down on the highway,” he explains. “We sat on 2100rpm at 90km/h most of the way, but it was only 2600rpm at 110km/h. Even so, we still had 10 fuel stops using $770 of PULP.

From Summernats 20 and 21 Top 60 Elite to Street Machine Drag Challenge contender - definitely not the usual life of a classic Sandman pano!

“As for the weather, the 502ci ran cool, but the heat fried the coil and boiled the fuel and maybe the trans. We don’t know really; the pano only has the original GTS gauges keeping an eye on things.”

That’s something that had Shane and Carly worried as they rolled into Adelaide on Thursday. “We were cruising in peak-hour traffic when suddenly I only had first gear,” Shane says, “I definitely thought we were out of DC, but once I got underneath I found it was only a vacuum hose that’d split and fallen off.” With the event done and dusted, now it’s time to fix the broken bits and dream about the future. “I’d love to compete again and try for a DYO placing,” Shane says. “I reckon I can get close to 11s just doing a few basic things, like a shifter. I’m still running a stock shifter, which is not something you really want to manually shift with. I’ll see what I can do about cooling the fuel system, and maybe swap out my vac-sec carb to a Holley HP 850DP. Also, something fancy like gauges that show the actual temperature would be good!” SM scribe Carly Dale tackled Drag Challenge for the first time in 2017 alongside her hubby Shane. Here’s her advice for first-timers

Having survived my first Drag Challenge, I realised there are a few things that people really should know and prep before rocking up to DC for the first time.

1. Get those revs down on the highway, whether via Gear Vendors, an overdrive ’box or with the tallest tyres you can wedge under your guards.

2. Pack for all seasons. DC ’17 saw bathers on Days One to Three and beanies on Days Four and Five.

3. Chances are you’ll be caught in the rain during at least one of your drives. Demisters are really handy for windscreen vision, and working wipers can also be of use! Tarp up the trailer or ute.

4. It can also get melting hot. Carry ridiculous amounts of water, both for the crew and the car. A wet hand towel around the neck may also help your sanity.

5. Reliability is a good thing; know your car and know how to fix it. Do a shake-down run. As fellow competitor Phil Edmondson advises: “Start prepping your car well in advance, and make it as reliable as you can!”

6. Pack spares – gaskets, hoses, water pumps, alternators. Al Vella packed a gearbox, while others had everything bar the block. Definitely bring cable ties and 100-mile-an-hour tape, along with your whole tool chest, a jack, axle stands and a wheel brace.

7. Have a good cooling system. For the engine, that is – a/c is optional, you sooks!

8. Comfort. Electric fuel pumps scream in the heat; either get used to it or bung in earplugs. Comfy seats never go astray, but with so much going on, butt-cushioning will be the least of your worries. Music can be nice, unless you’re trying to listen out for mechanical gremlins.

9. If you have an enclosed trailer, hinge the roof. We didn’t – big regrets.

10. Have fun! Seriously, if you are not entering this to have fun, then go check yo’self. Have a gander at the Street Machine Drag Challenge online videos – even the top contenders are having a laugh while keeping an eye on the prize. DC’s happiest entrant, Clive Polidano in the blue HZ sedan, says: “It’s the best car event I’ve attended. Everyone I spoke to was keen to share a story and have a laugh. We’ve had oodles of fun and met some really cool people.”

"Two of my three passes at Mildura were 7.864@87mph - talk about consistent," Shane enthuses. "I'm very happy with that!"