THE competitors in the Tuff Mounts Radial Blown class had a cool 150km cruise from Warwick to Willowbank, via the awesome Scotty’s Garage (no, not that Scotty’s Garage) out the back of Toowoomba. Once they got back to Queensland’s best-known quarter-mile strip, the laptops came out and tunes were set to kill mode for the last day of competition, as word had gotten around about how good the track was. Terry Seng had a tough run at Drag Challenge Weekend, but stopped everyone in their tracks when he cracked off a 7.66@179mph to break the record for the quickest ET ever at a Drag Challenge event, and set a new PB for his HDT275 Commodore. 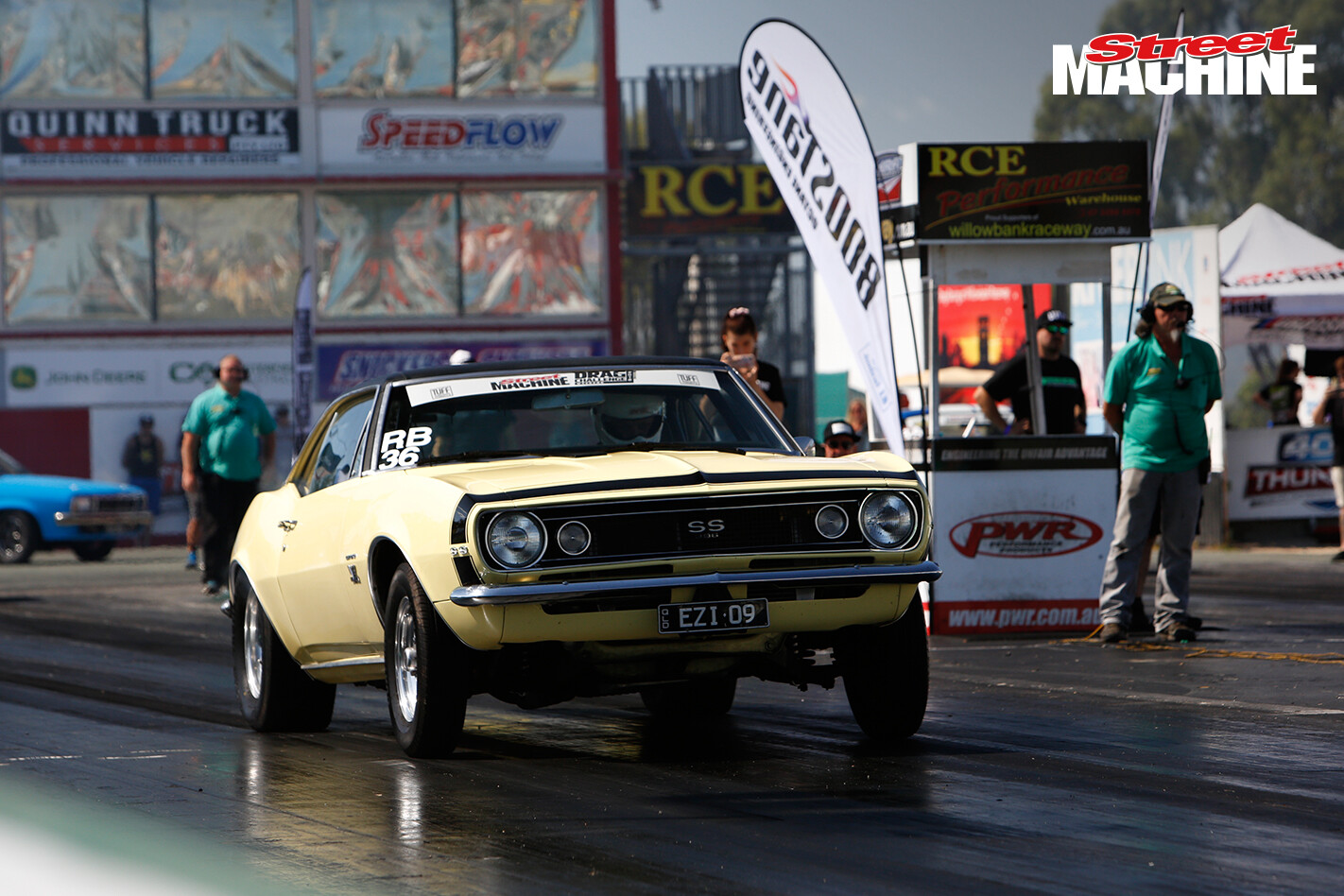 Ben Taylor’s immaculate turbo LS2 Camaro unfortunately ripped its exhaust off on the drive, but it didn’t stop the factory big-block machine from turning a string of low nines on the last day of Street Machine’s first Drag Challenge Weekend. His best run of the day ended up being a 9.3@148mph, which locked him into 10th place overall. 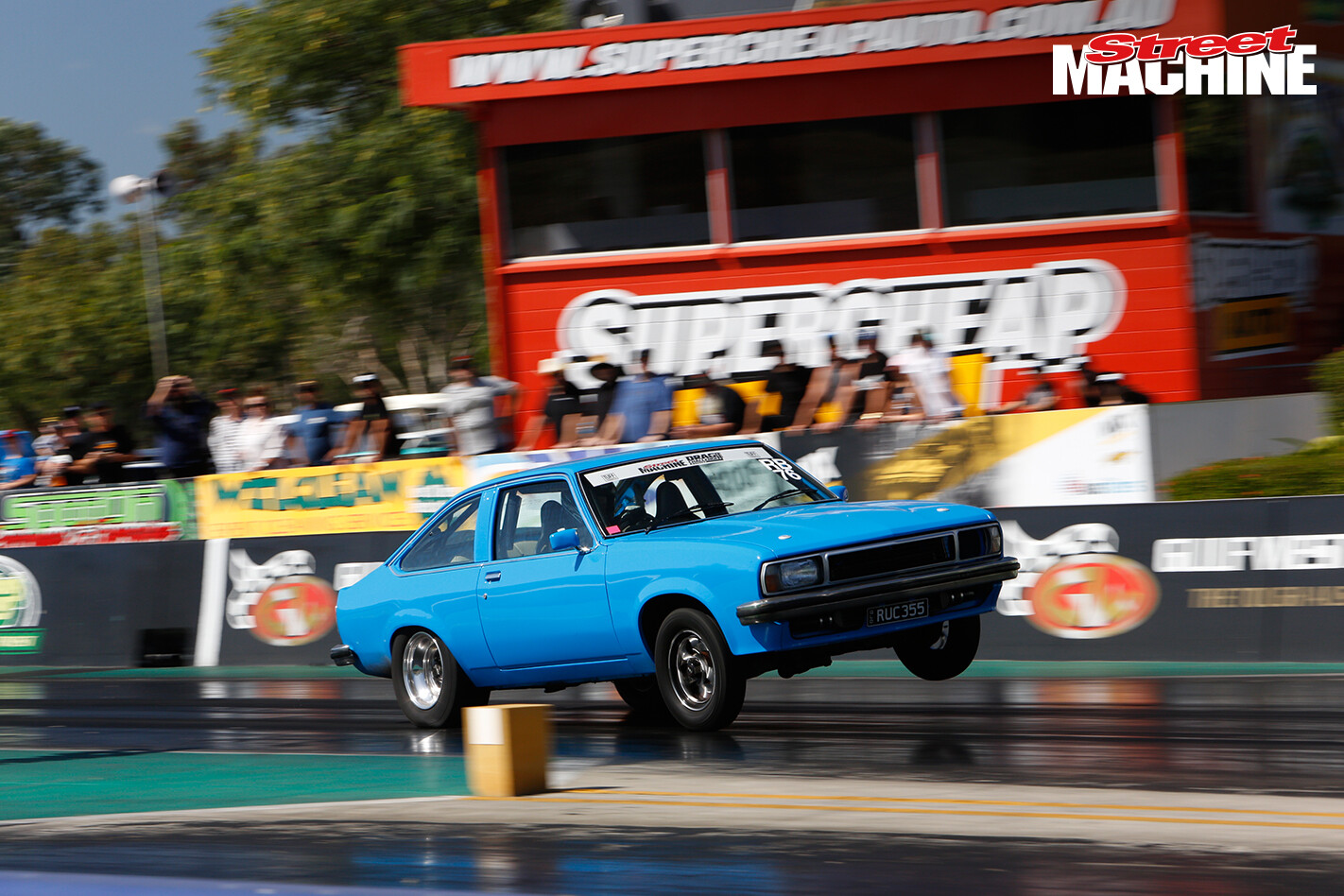 Jason Ross was going to pack up his stock-bottom-end turbo LS1 UC hatch after running a 9.00, but went back out for one more run in the searing midday sun and finally cracked into the eights with an 8.91@144mph. Dave Williams was on a mission in PSI PREM, but had issues getting the power down and then had a monster wheelie. In the end he threw down an 8.15 late in the day.

Jon Fulton also PBed his Bluebird sleeper, running 10.54 and breaking his own records for best 60-foot, eighth-mile ET and speed. While he was confident he could’ve gone quicker, he packed up after his one run as he didn’t want to get booted for having a car not tech-inspected.

Mick Titmarsh was struggling with bogging issues off the line early in the day and wound up happy with 10.43@129mph, as he had to drive the Cortina home for seven hours. 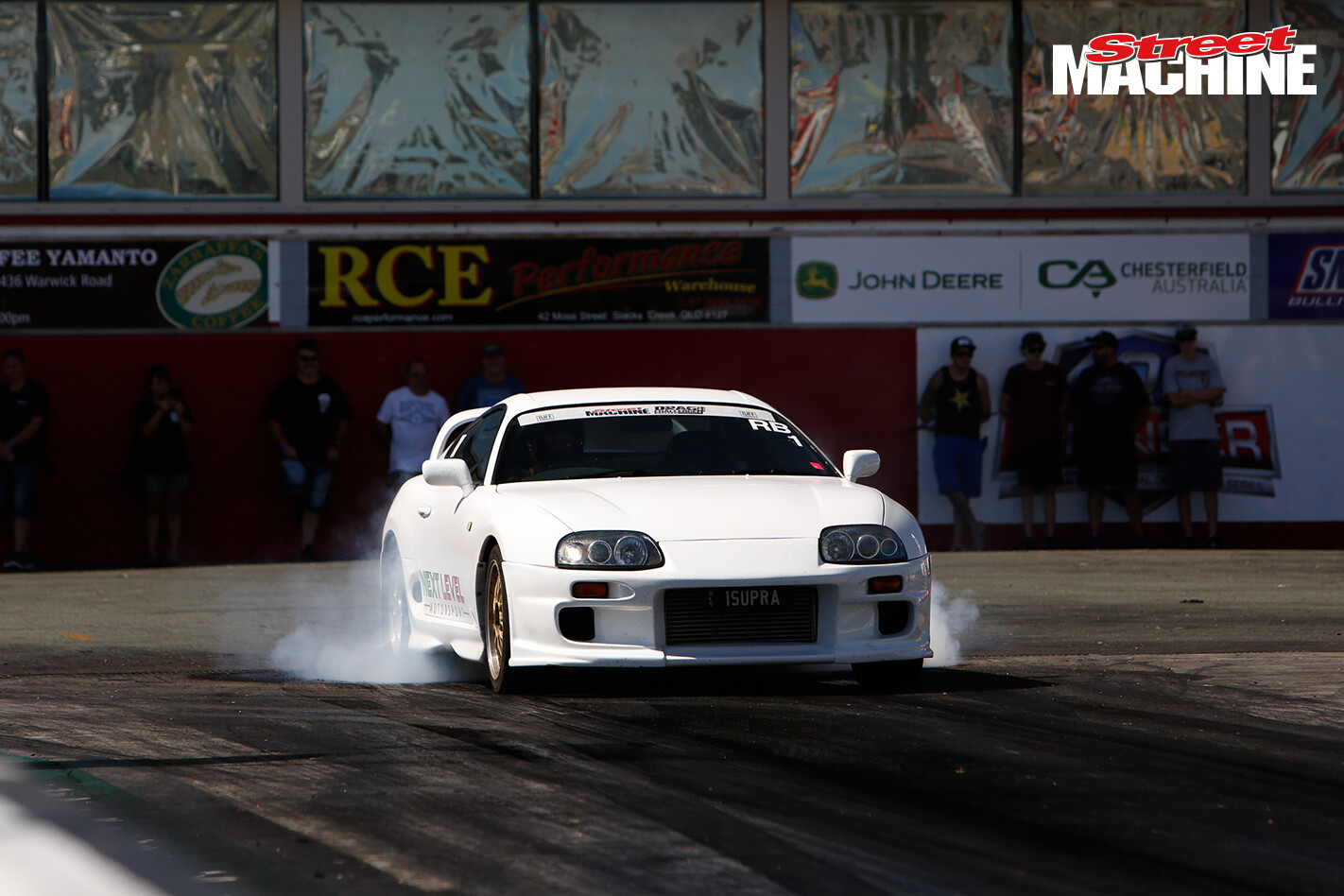 Tara Johnston set a new PB in her Supra, pushing a 10.13 on a conservative set-up and backing off early in the un-teched car. Tara struggled with blown injector O-rings on the drive from Warwick and didn’t want to push the patched-up repairs too hard. 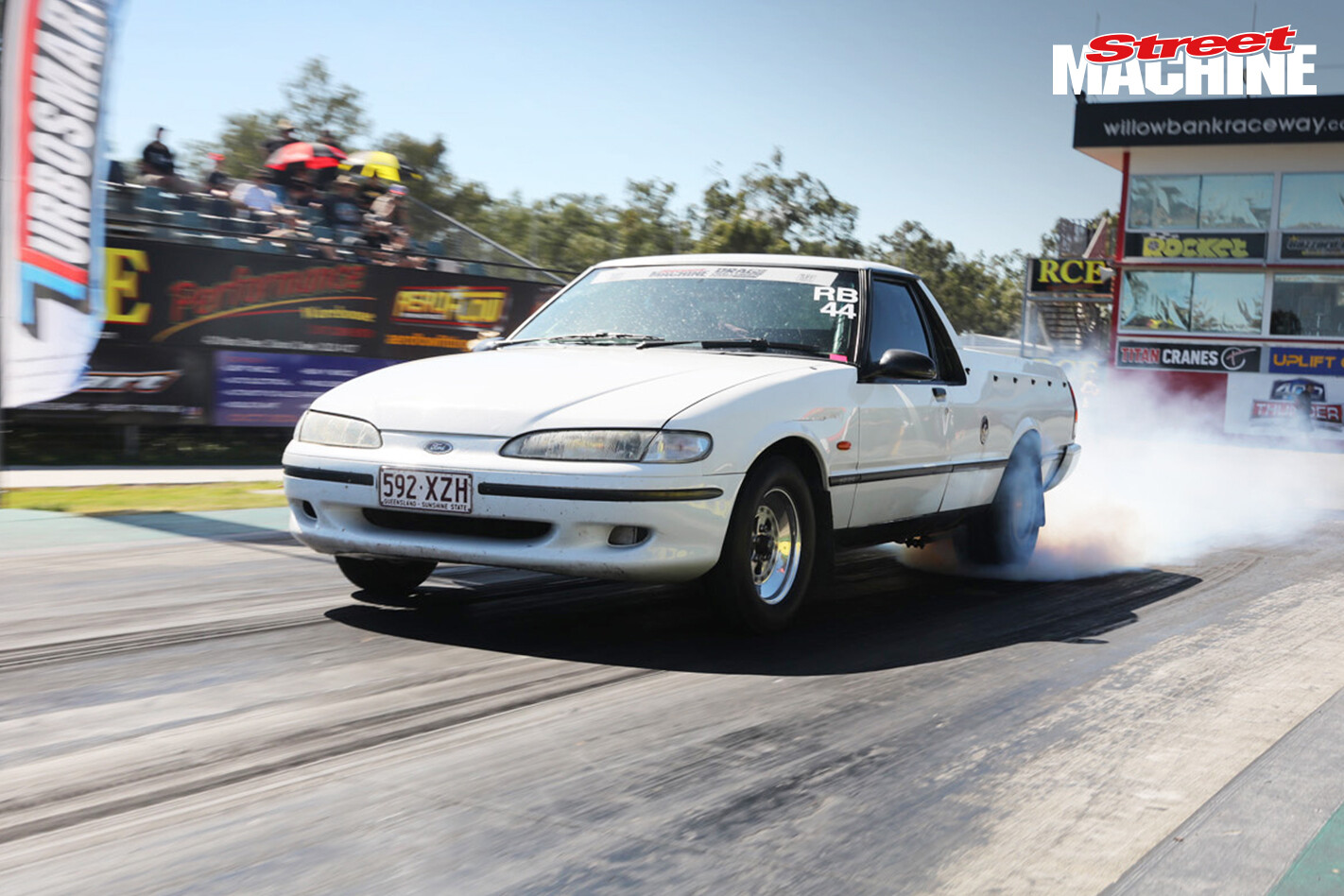 Jamie Farmer was busy fine-tuning his set-up on the hot track surface, eventually calling his 8.45@160mph good enough as it landed him in second spot in the class and overall. 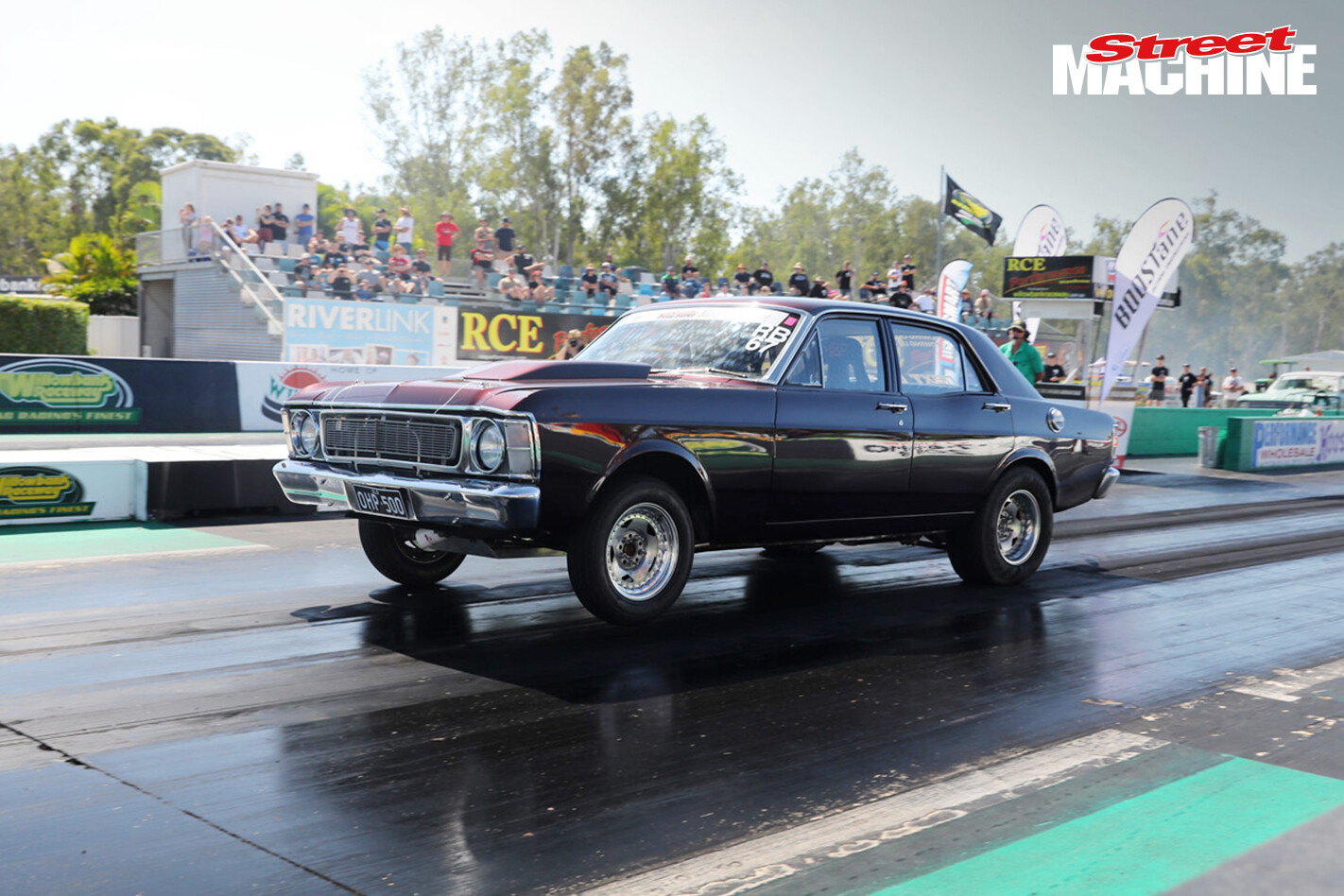 Taking top spot was Mark Van Der Togt’s epic X-dub Falcon, though he was incredibly lucky to take home the tinware after tagging both walls in the braking area on his first run of the day. While the twin-turbo Falcon was a jet down the strip, it unloaded badly in the braking area and bounced off the left wall, into the right.

Thankfully, the 8.07@169mph was enough to cement his win in both the Tuff Mounts Radial Blown class, and overall for Street Machine’s first Drag Challenge Weekend.