AT FIRST glance, it’d be difficult to find two vehicles more different than Elvio Gonzalez’s pretty red 1971 Ford Capri and his mate (and customer) Con Pakos’s plain white 1989 Mitsubishi Express delivery van. In fact, with the two cars parked side-by-side, at any other event where the rules allowed it, the Mitsubishi could be the tool-truck for the Capri. But no – both were Street Machine Drag Challenge participants! 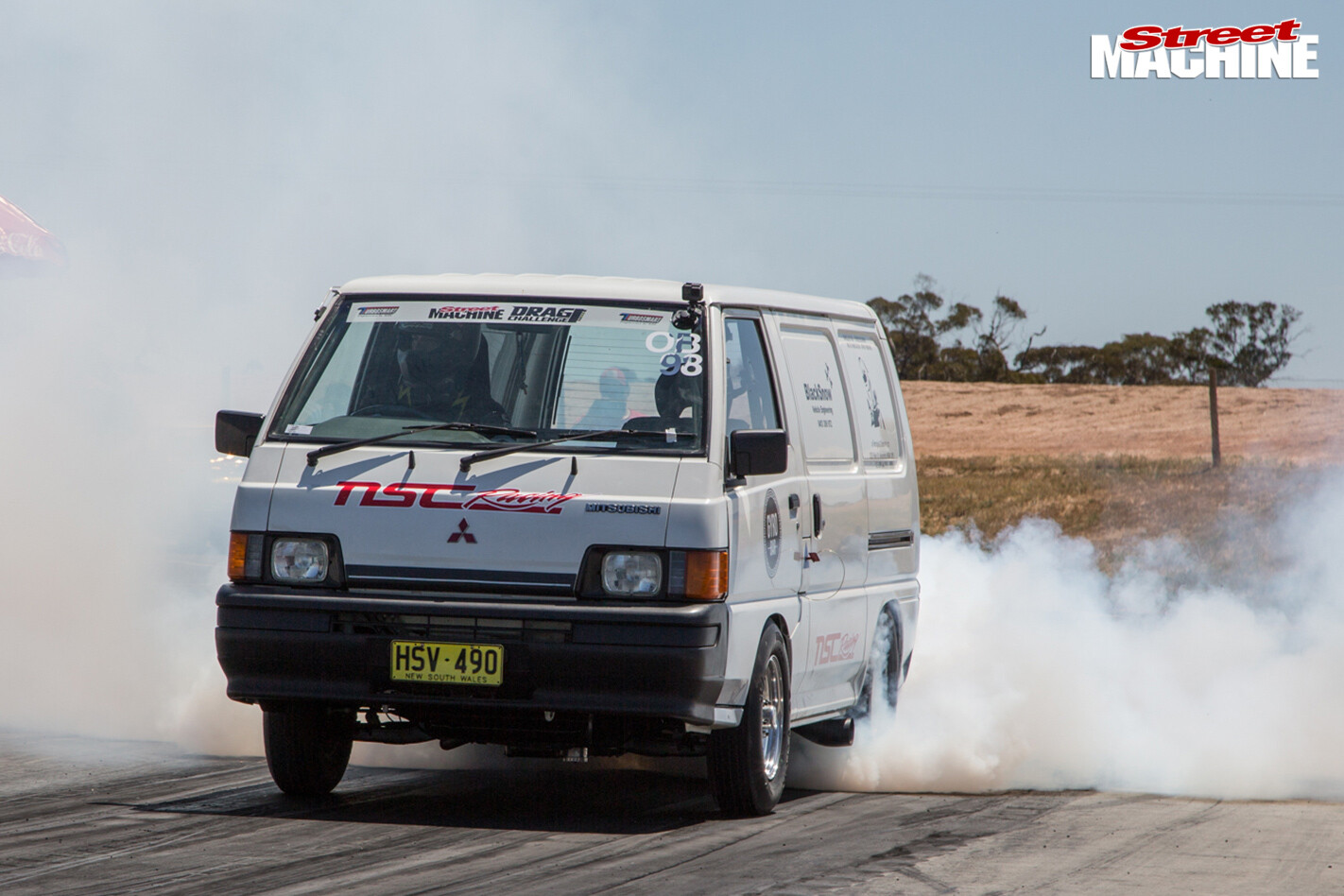 Under the skin though, these two vehicles are actually very similar, as they both run transplanted – and turbocharged – LS V8s, Powerglides and nine-inches.

“It’s a 376-cube GM Motorsport crate motor,” explains Elvio of his Capri, which regular Street Machine readers will recognise. It’s had a cam change, but the real fun part to this LS is the turbo in the boot! Yep, bolted to the rollcage behind the rear seat and squeezing cool, clean air from the left side window is a GT45/08R Garrett snail. It’s fed from a set of VE HSV-spec extractors at the front of a dual exhaust system that rises through the spare tyre well to merge just prior to the turbo. 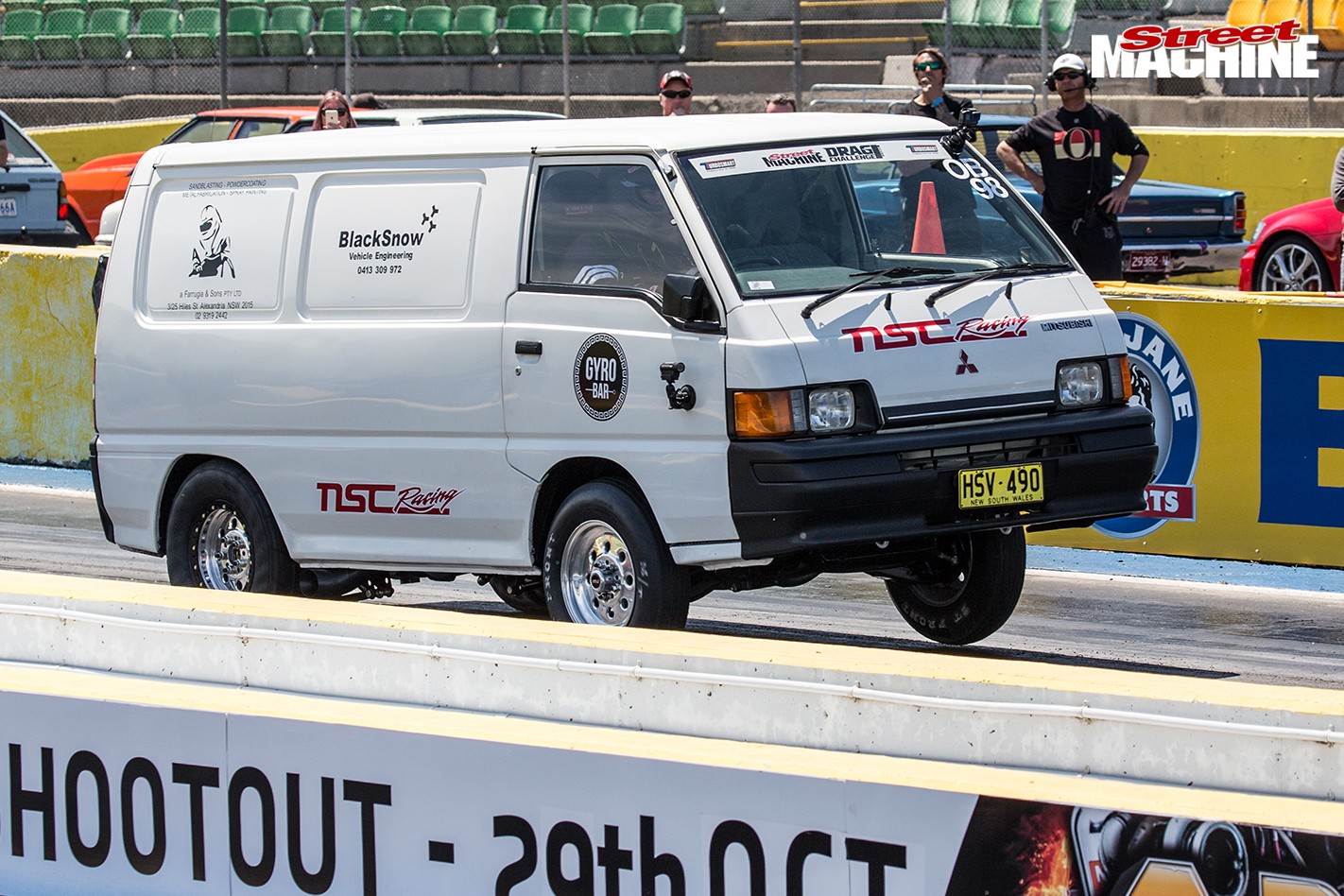 The management is Haltech, and methylated spirit is injected into the non-intercooled intake (above 4000rpm and halfway down the loud pedal) to help keep things cool. Elvio says he takes the engine to 7800rpm with the standard valvetrain architecture.

“I kept it as simple as possible,” he explains of the Capri’s build and the engine conversion that was achieved with no snipping of the Capri’s classic sheet-metal. Good thinking!

“Most of the hardware is just factory stuff, so it was easy to build and it’s easy to look after.” 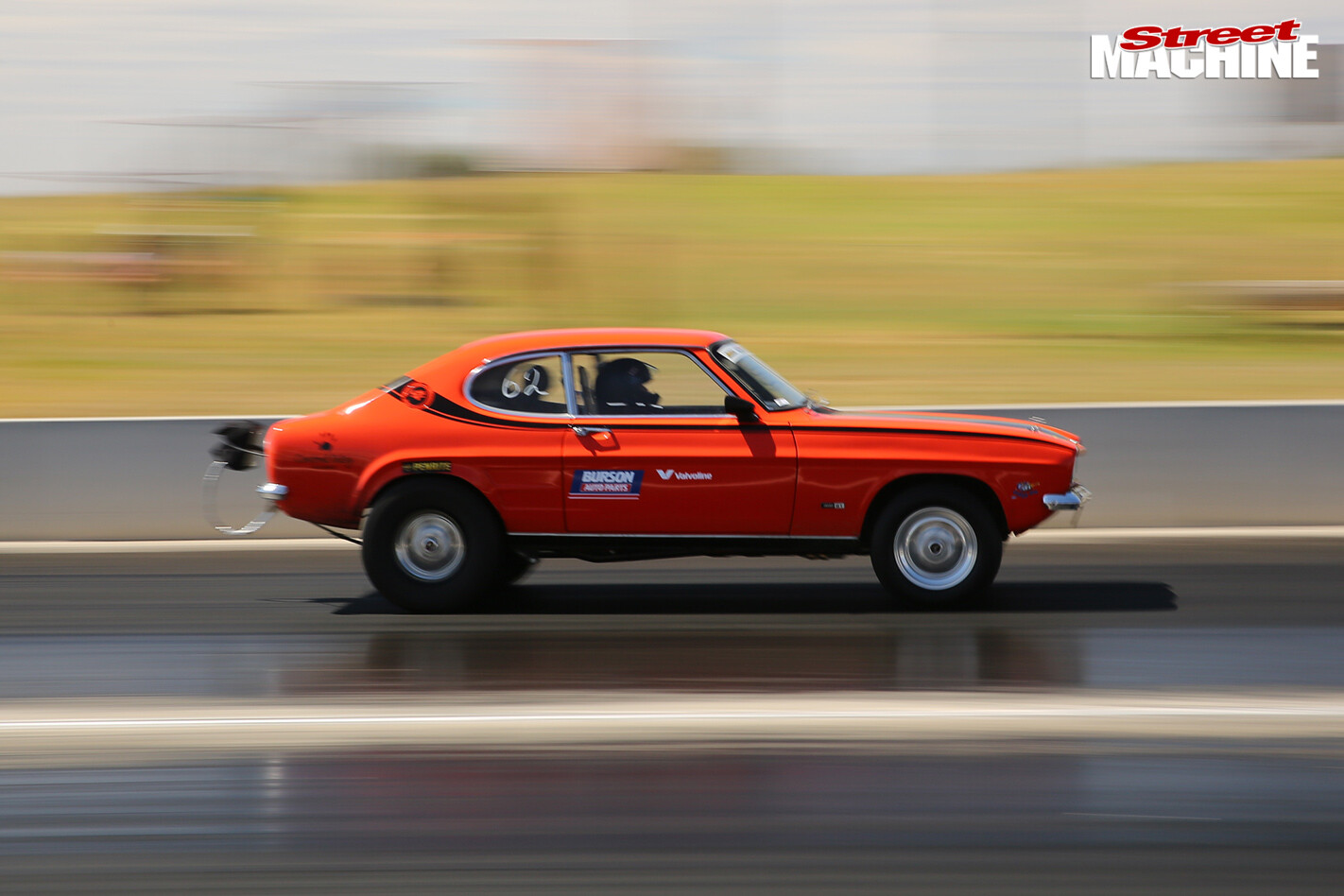 Like many other cars on Drag Challenge, the trans is a Powerglide with a trad-tough nine-inch rear. In testing at Sydney Dragway, the Capri did an 8.39 but ran out of revs, so the diff gears were changed from 3.5 to 3.25 for Drag Challenge.

Elvio arrived with justifiably high expectations of the car for Drag Challenge, and it ran nines all week, finishing with an 8.8 and then a freaky 8.32@167.36 on its last run – the car’s fastest for the week and a PB for Elvio, helping him earn a credible 17th outright and ninth in the Haltech Radial Blown class. 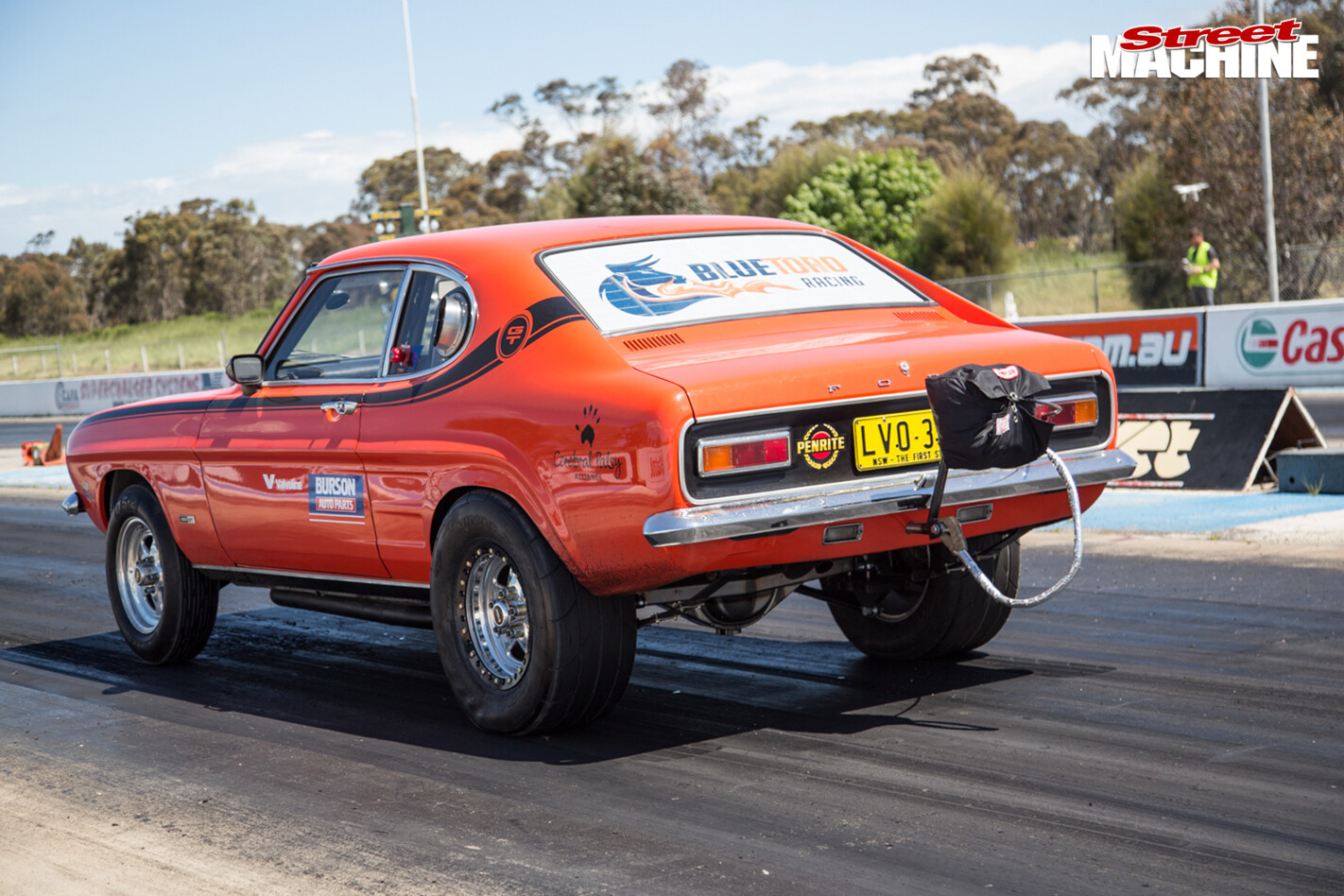 Elvio had a big hand in building Con Pakos’s Itsabitsy Express van, too, designing and engineering the LS transplant with assistance from Peter Cleary at Pro Racing.

Con’s an electrician, so that’s where the inspiration for building a stinkin’-fast tradie’s van came from. “It’s my old work van!” he says of the big white box. “The two-litre shit itself.” 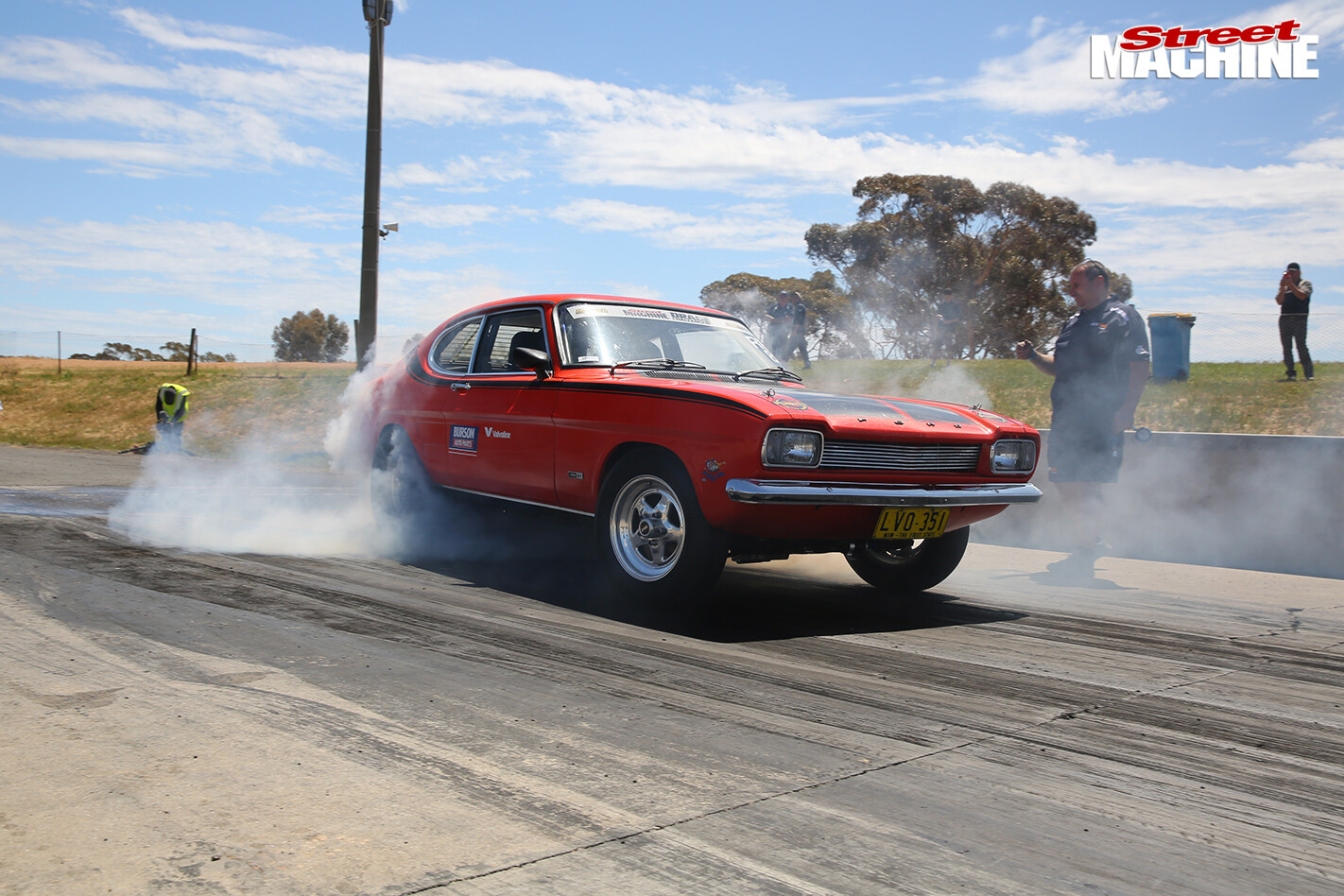 The 6.0 in the van now wears twin turbos for 12psi, a FAST alloy intake and Haltech management. With the engine sited under the ANDRA-spec Kirkey driver’s seat (the van has an ANDRA ’cage, too, and a parachute!) the turbos are neatly mounted roughly halfway along the van, inboard of the sills under the load-area floor. They live in nice, clean surroundings of two-pack paint thanks to a recent freshen-up of the Express’s underside. 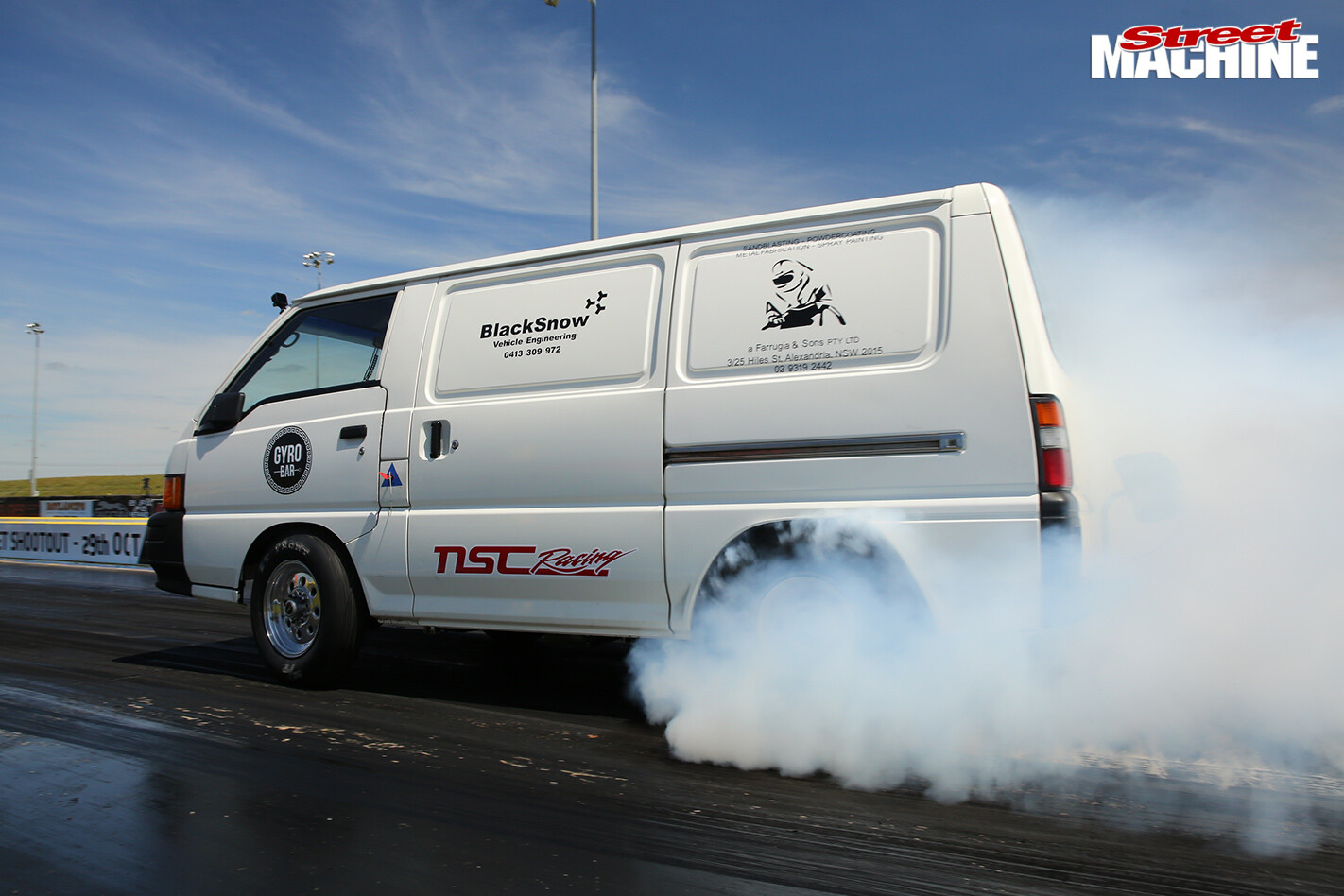 Like the Capri, the ’box is a Powerglide and the rear end a 3.5:1 nine-inch with CalTracs and adjustable 4WD-tech Rancho dampers.

“We did most of the fabrication a couple of years ago,” Elvio explains of the Express’s twin-turbo transplant. “But it wasn’t finished. So we did a big thrash to get it all done before Drag Challenge.” Con drives the Mitsi-blitzer a couple of days a week – and to events such as the Bathurst V8s – but a recent illness meant he asked Elvio to be the stuntman for Drag Challenge. Yes, while Con drove his van during the transit stages, Elvio did double-duty driving both the Capri and the Mitsubishi on-track, piloting the psycho sparky truck to a 9.3@133mph – also on its last run at Calder Park on Friday. Mad! 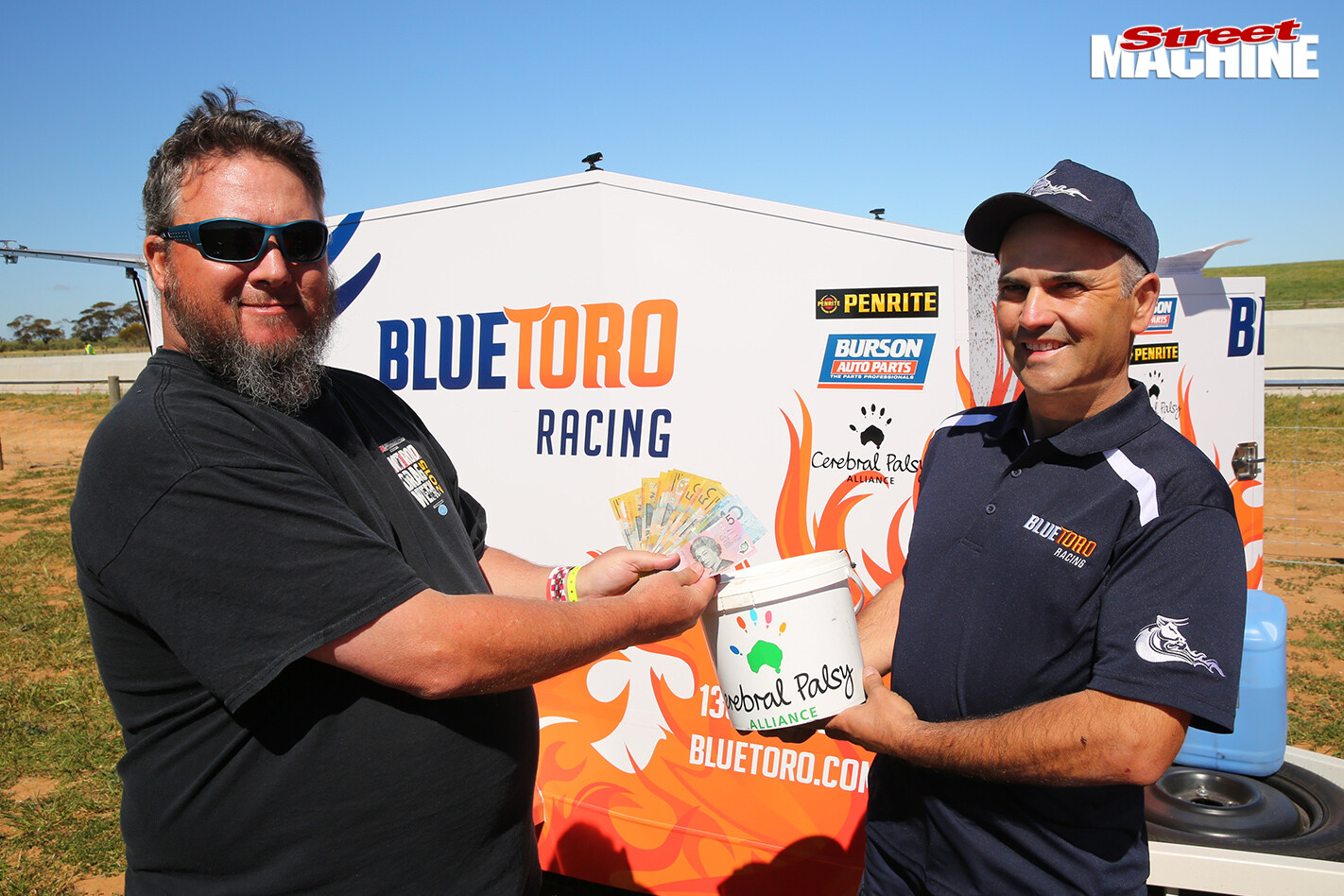 As well as racing, Elvio was also raising money for the Cerebral Palsy Alliance, nabbing $1600 from the ‘first pass’ raffle at Swan Hill alone