ONE of the stealthier sleepers at Street Machine Drag Challenge this year was Dusty Benson’s white VC Commodore sedan.

“I bought it to build into a fun car for Performance Car Mania at Winton [in Victoria],” said the Wodonga local. “Then when I heard about Drag Challenge, it was a natural for that, too.” 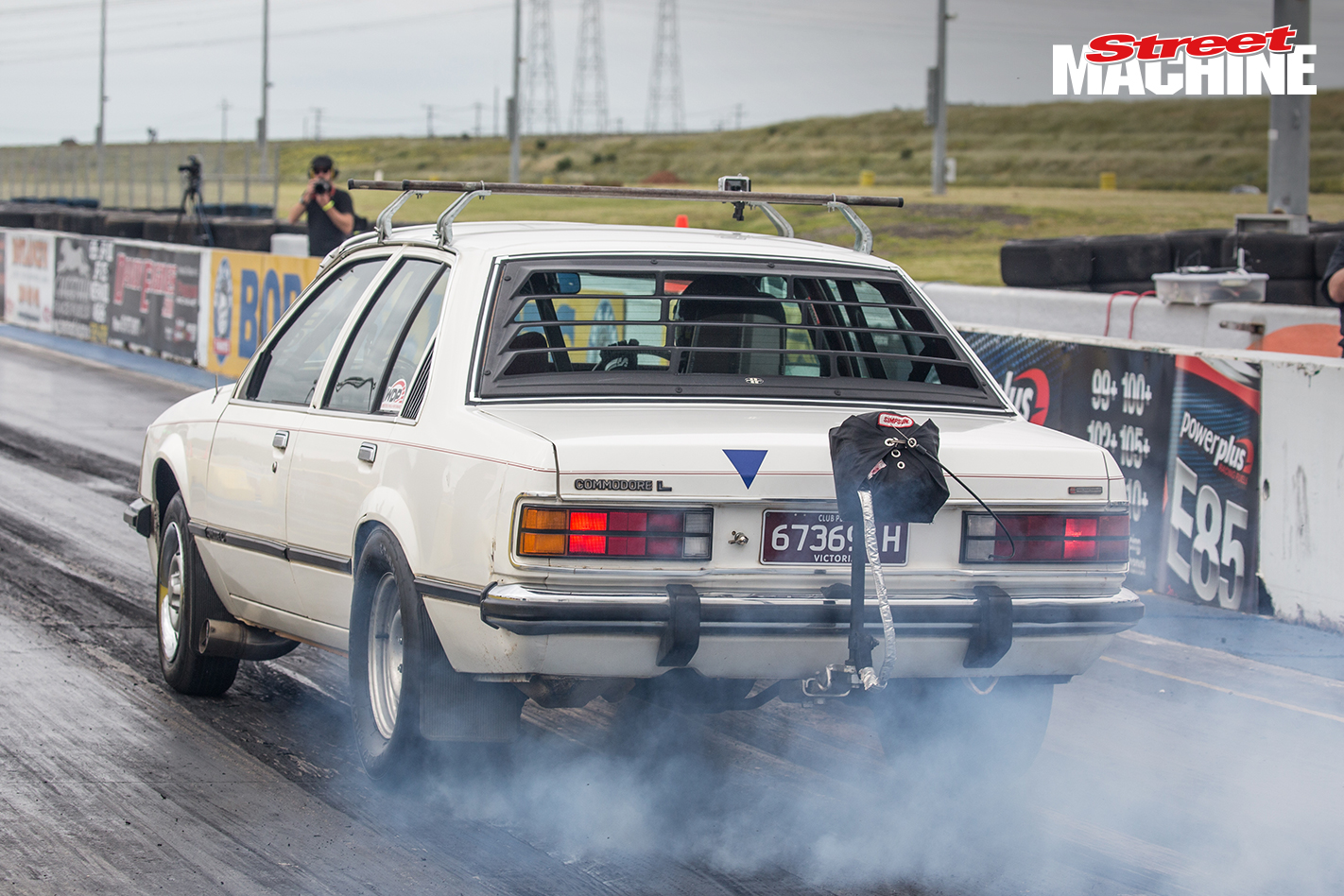 A disgustingly cool 1980s Aunger louvre takes pride of place on the rear window of the Commodore, a remnant of its mundane past before Dusty bought it for $700 three years ago. 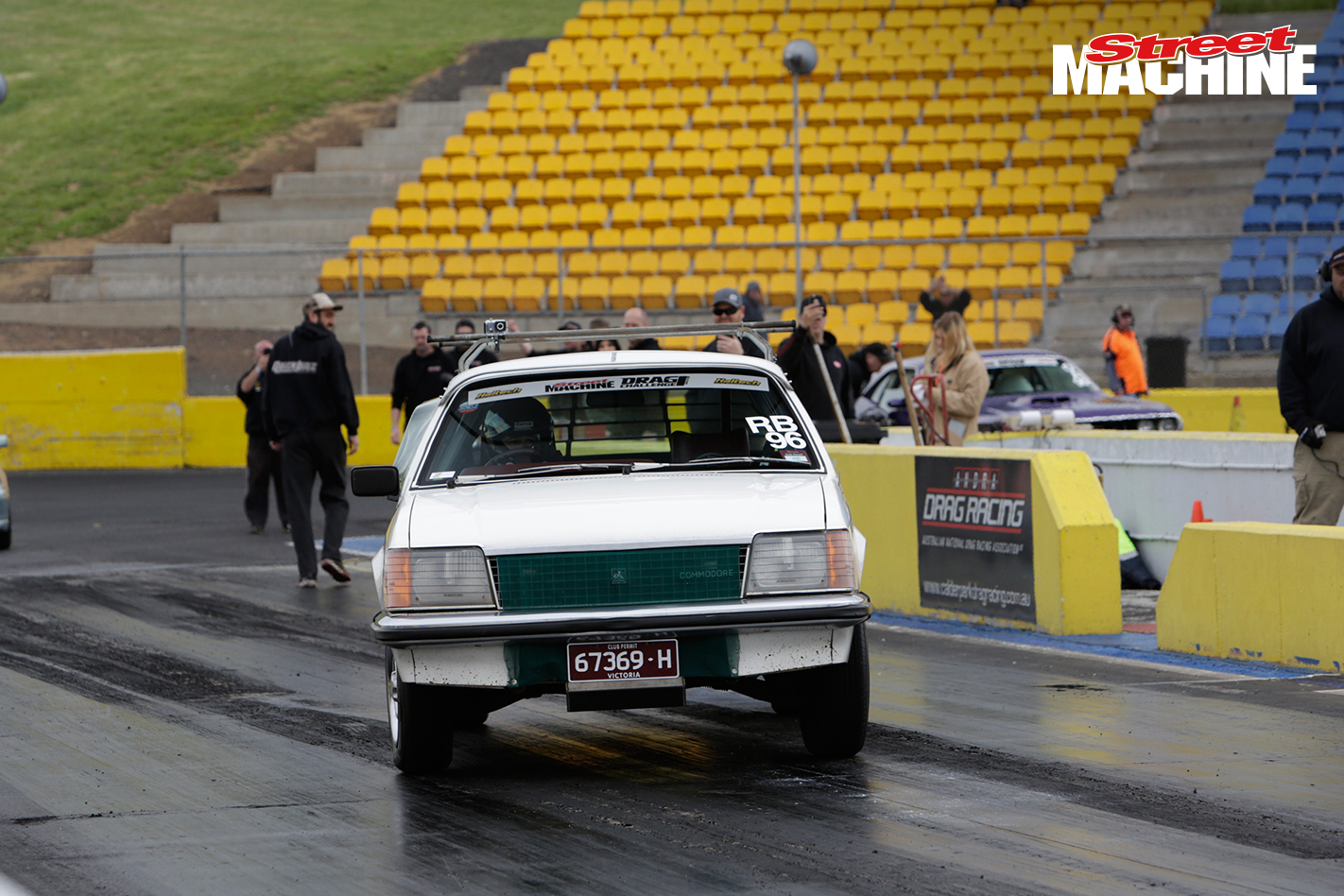 “It already had the louvre and the roof racks, but we fitted the front sun visor,” Dusty laughed we did a reconnaissance lap of his car. “Did you see the water in the front indicator? We’ve kept it as original as possible!” 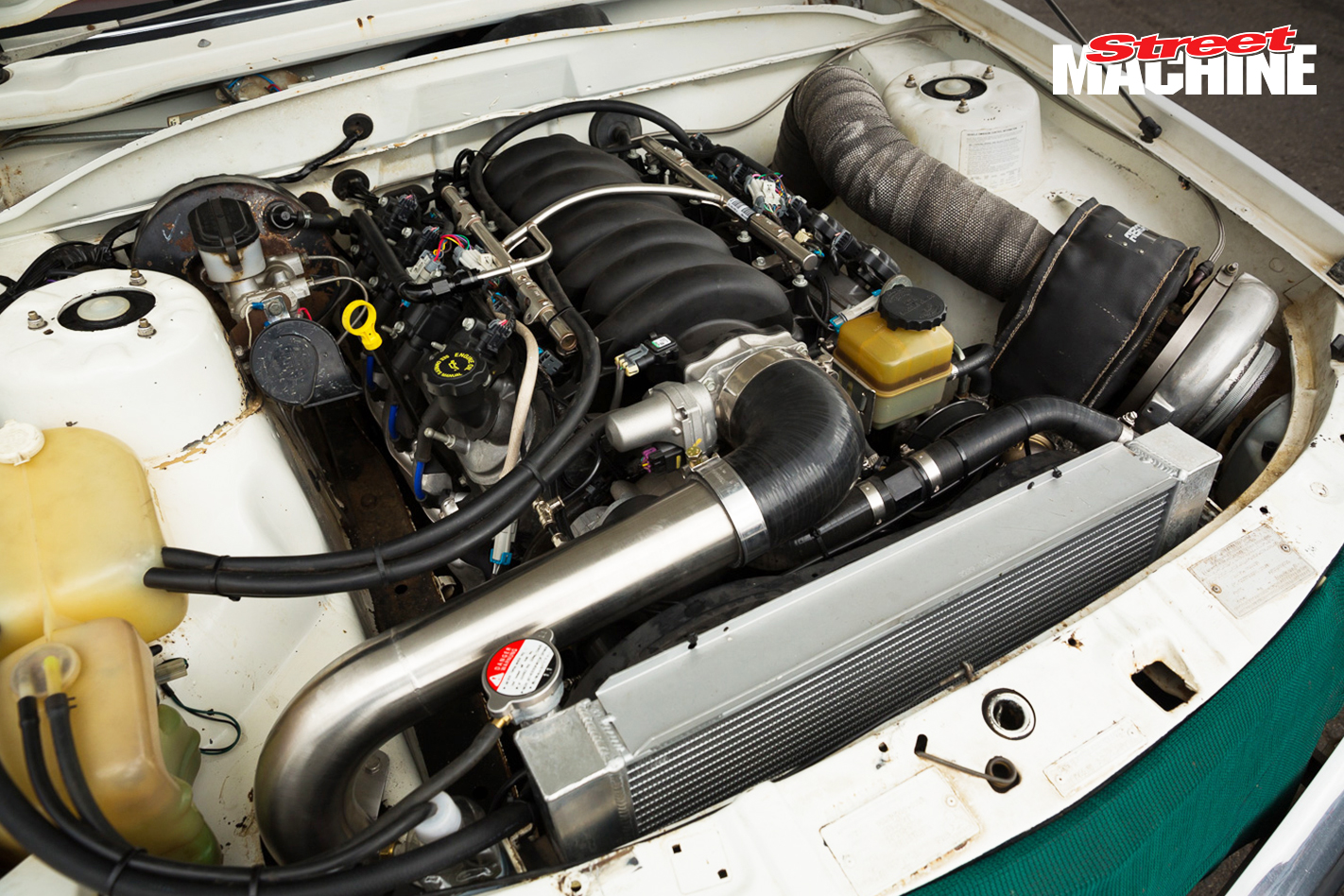 Shadecloth is an old cow cockies’ trick to keep moths and locusts out of the radiators of cars being driven in country areas –  and it’s also very handy for hiding a large front-mount intercooler! The intercooler is a big hint that this Commodore’s original wheezy 1.9-litre Starfire four isn’t in it anymore. Oh no – now the plain-Jane Commodore carries an ex-VZ Commodore 6.0-litre all-alloy V8, cammed and taking a hit from a Garrett GT42/105 turbo. 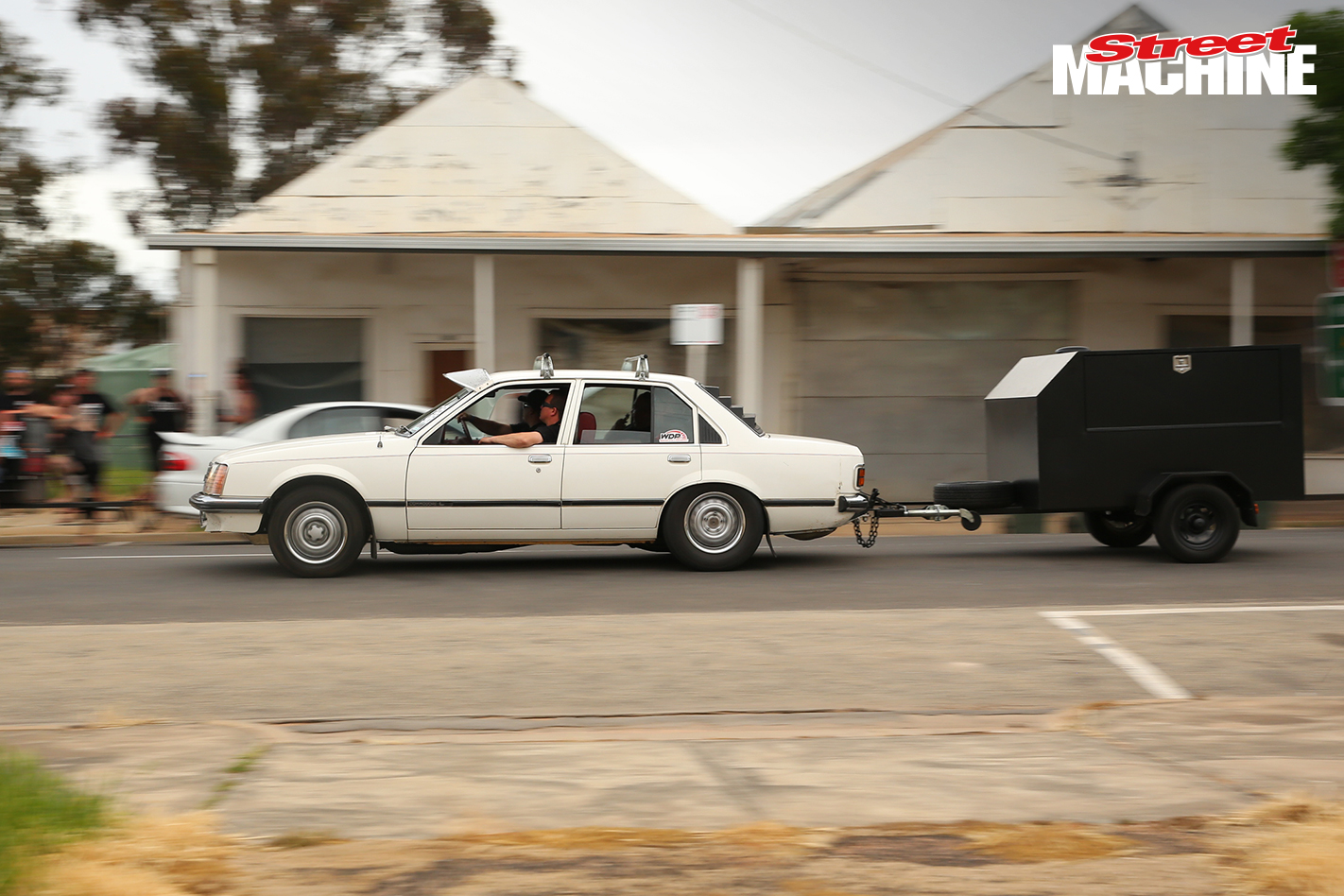 Like many – if not most – of the LS V8-powered cars at Drag Challenge this year, the engine didn’t need too much work to be taken from hack to track; this one was upgraded with a cam, lifters and valve springs.

“The rotating assembly has never been out of it,” Dusty said. “All we did was slip in the cam and springs.” The management system is also standard VZ, transplanted (including the drive-by-wire throttlebody) into the three-decades-older VC, with Matt at Websters Dyno in Wodonga tuning it. 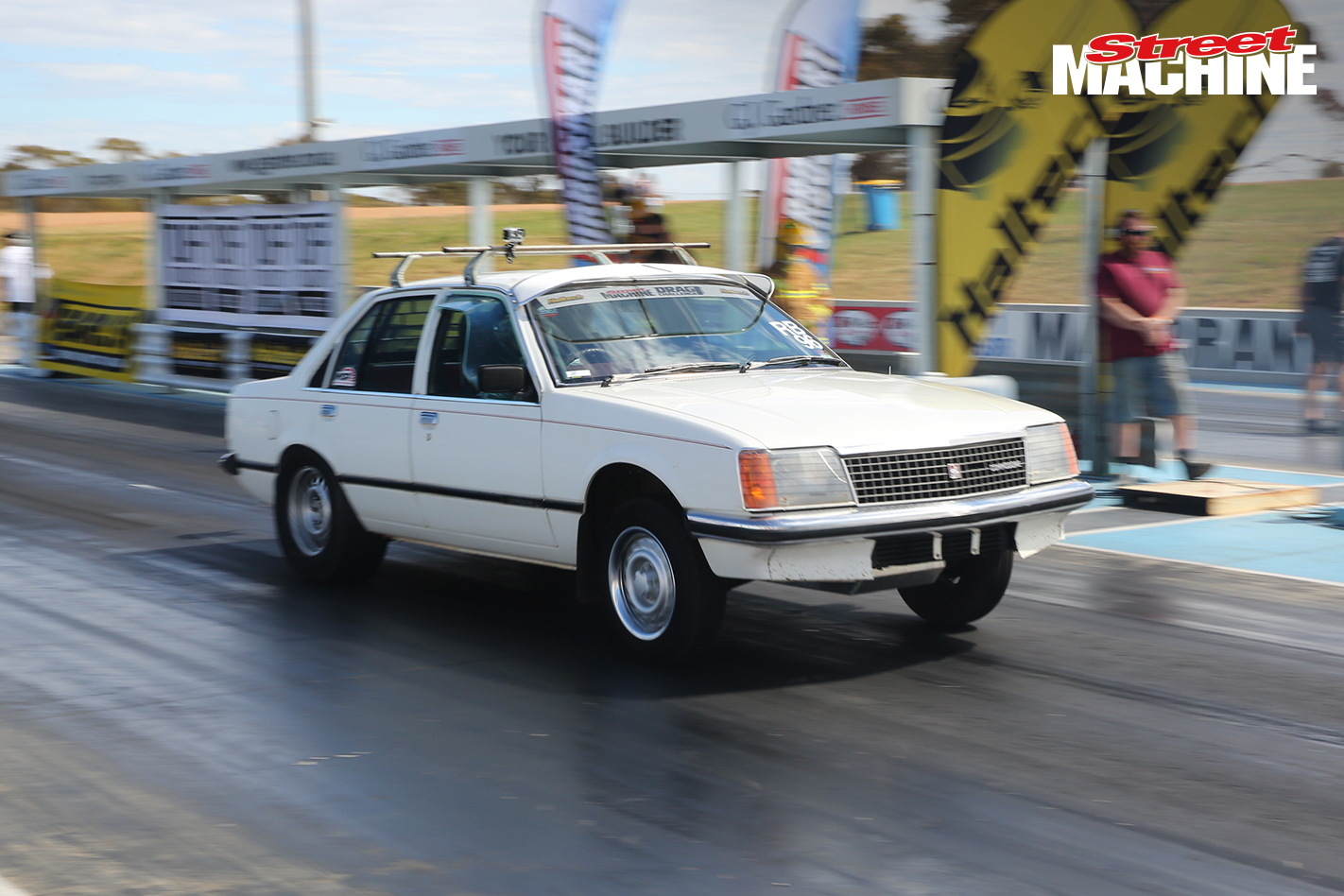 Behind the LS is a two-speed Powerglide (he retained the original four-speed shifter boot and knob!), TCT 2800rpm converter and a nine-inch axle fitted with 3.5 gears. Dusty contested the Haltech Radial Blown class on a 275 Mickey Thompson Pro Radial tyre on ex-cop steel wheels.

Touring around rural Victoria for Drag Challenge, the Commodore cruised at 2800rpm and consumed just 15 litres per 100 kays while towing its tender trailer. Terrific! 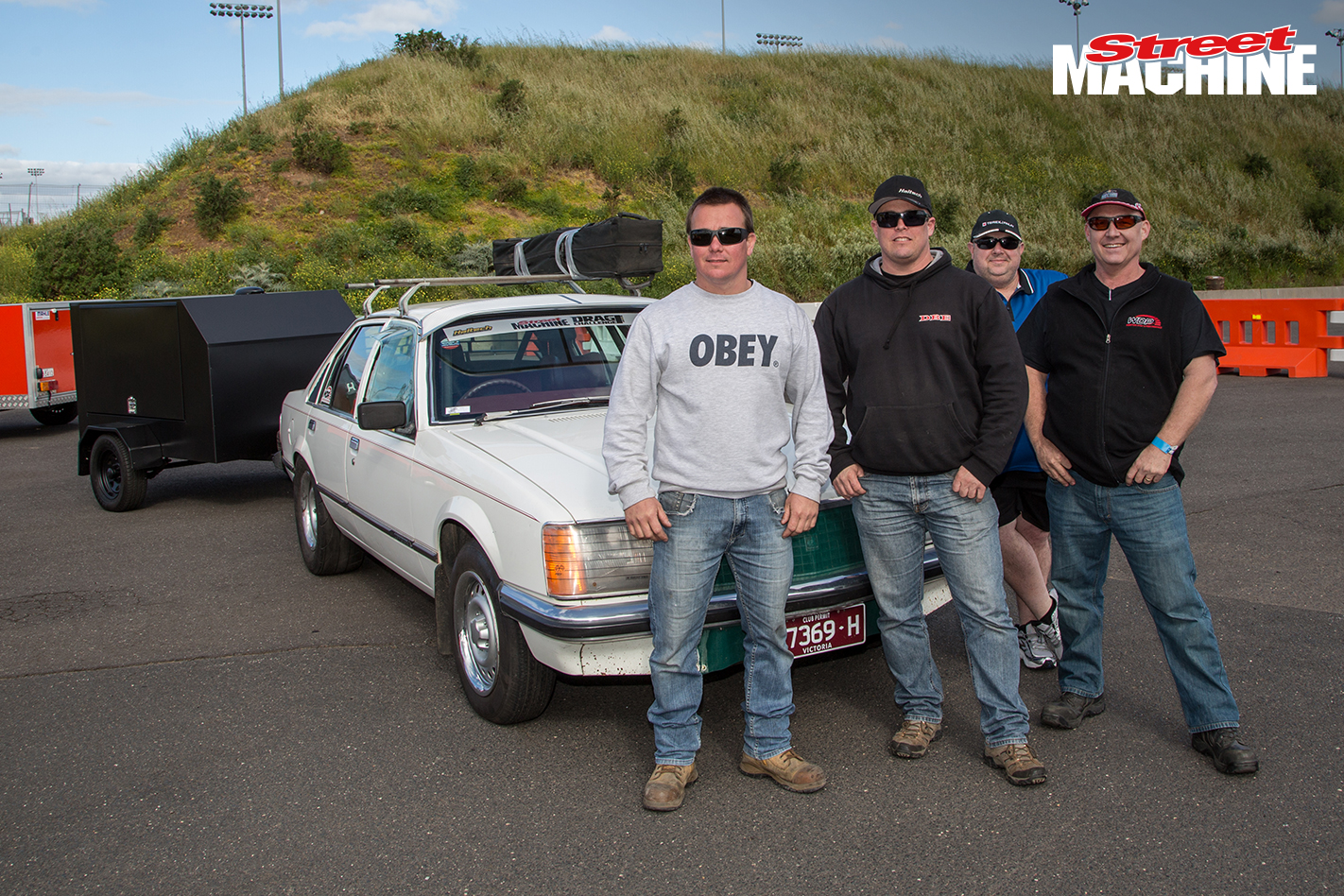 “It ran sweet as a nut all week,” Dusty said of his 9.4@144mph sleeper. “Until Friday. We broke a [tailshaft] uni, but we got another one. The only other problem all week was a thermostat jammed – we had to drill some holes in it. We did that by the side of the road on Friday.

“All our average [times] went to shit when we broke the ’shaft. I think we got 17th [in Radial Blown] at the end. But we finished. And we’ll be back. Maybe we’ll do it in something with cup holders and air conditioning!”