THE trials and tribulations of Hot Rod Drag Week were starting to wear the field down as we went into hump day of the five-day-long, 1000-mile automotive torture test. Day Three started quite foggy, both in entrants’ weary brains and in the air around Byron Dragway, Illinois. Aussie John Faraone certainly had the pressure on him to maintain his astounding seven-second average in his Charger, and he rolled through after no sleep and a complete transmission swap overnight. His first pass was no good after the car couldn’t hold any boost off the line, so the team hurried to repair what they believe was an issue with the converter dump valve. They just managed to sneak through the staging lanes for another pass about three seconds before lanemaster Lonnie Grim called stumps. The second pass was a pinball run, even taking out two of the centre divider blocks, but was passable at 8.72@167mph. John’s still in second place in Unlimited, seventh overall. 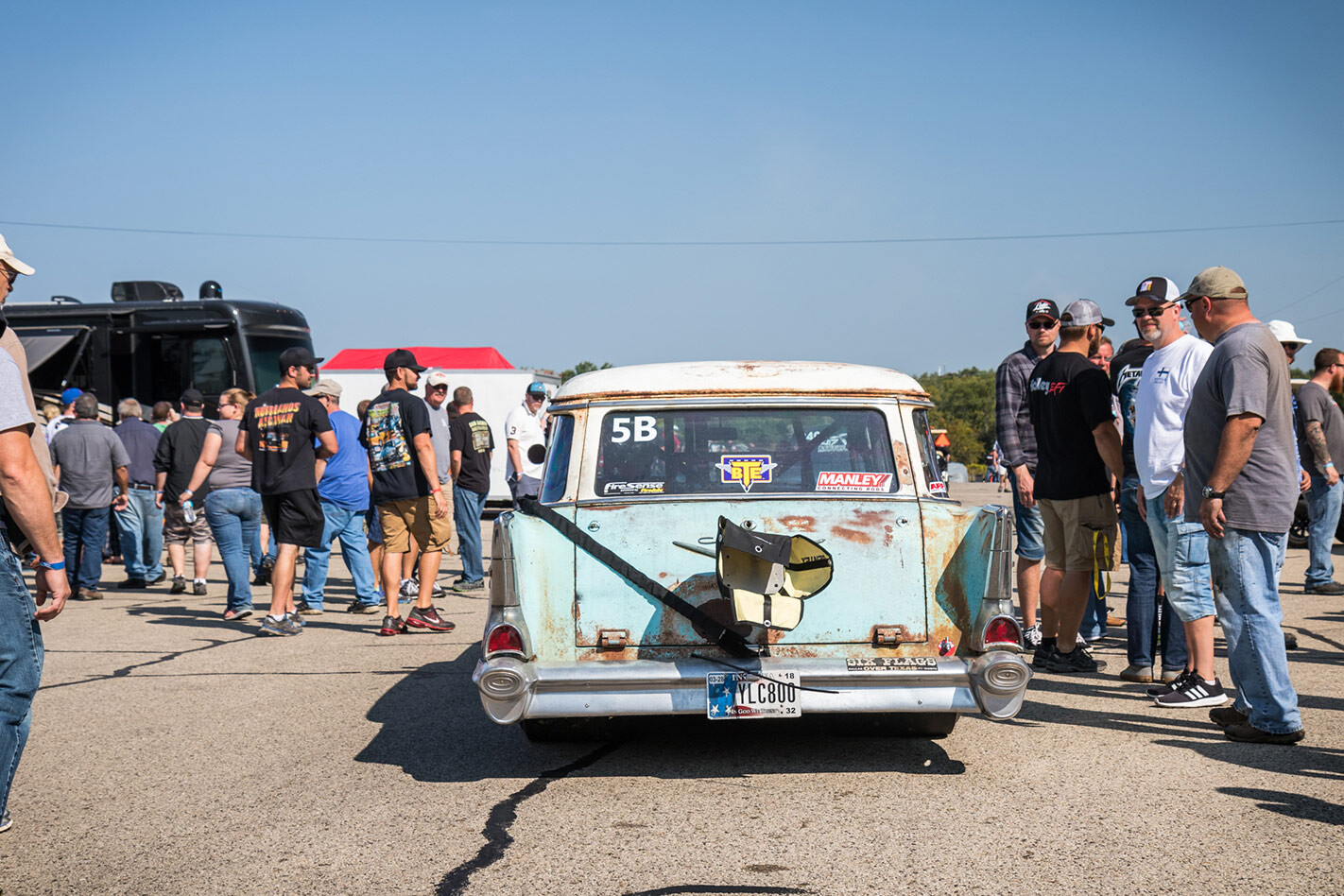 We waved goodbye to Richie Crampton today as he took his last pass on Drag Week 2017 in his awesome ’57 Chevy wagon. He ran an 8.27@165mph and hit the road back to Cordova, where he’ll then fly over to Charlotte to race Top Fuel this weekend. Good luck mate! 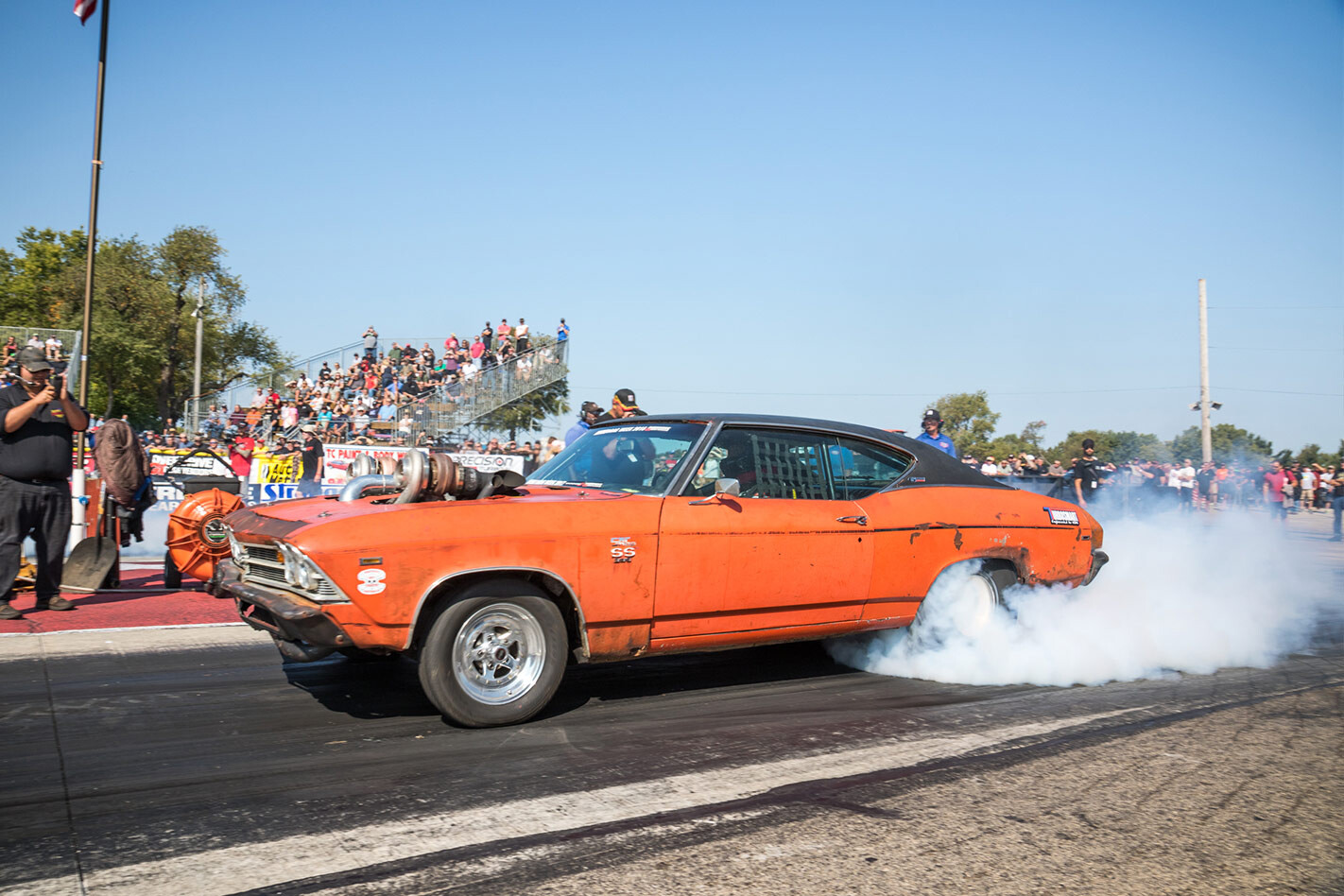 Harry Haig has been staying consistent but is still chasing quicker times with his barn-find/internet-celebrity Chevelle. Today’s best was a 8.76@158mph and he maintains third place in his class. Mark Arblaster picked up two-tenths today after dumping in a fresher batch of E85 in the POR440 VG Val, running nicely at 9.75@141mph. 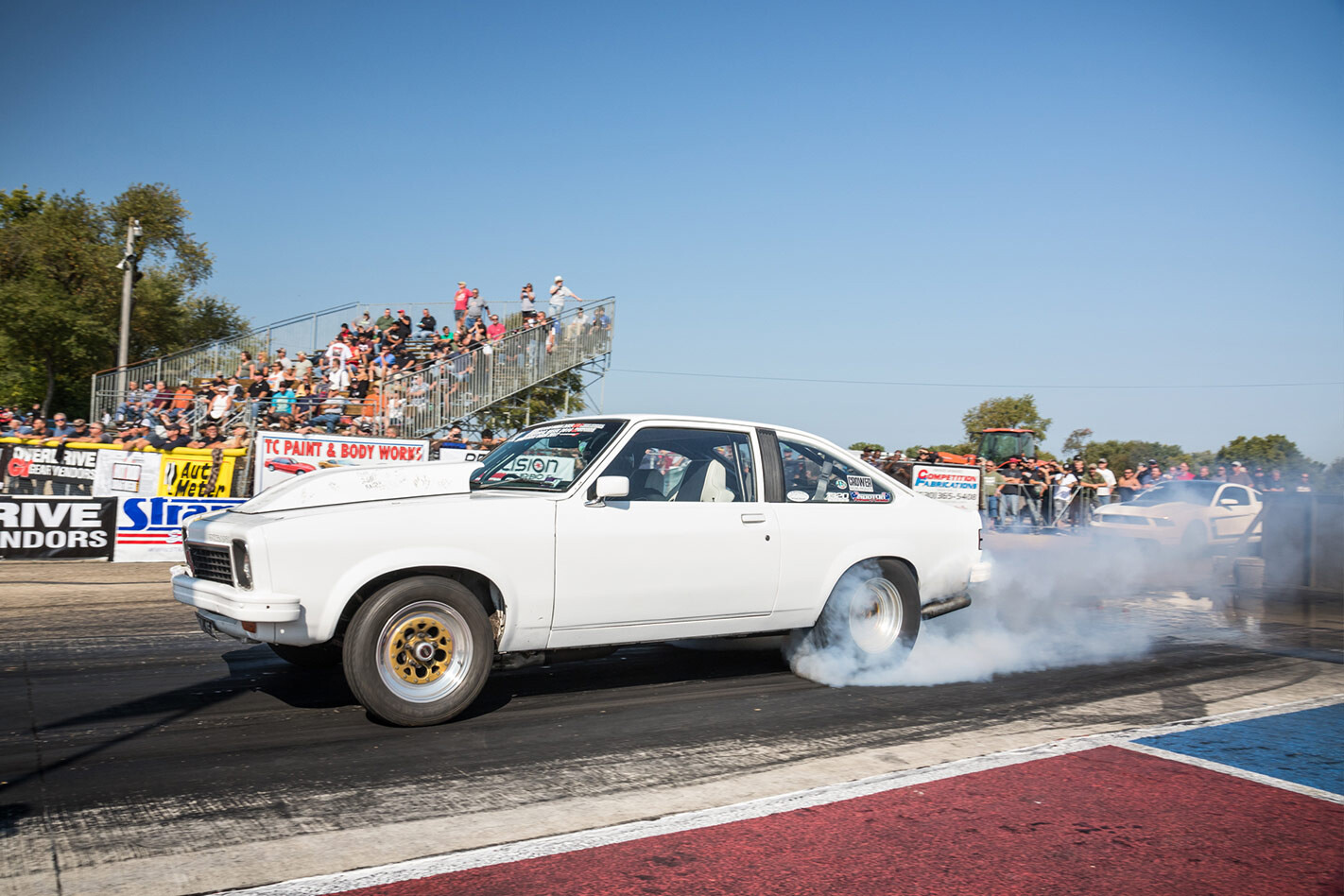 Brian Jensen’s times in the LX Torana hatch have slowed down a little since Day One; however he’s still on the one-and-done program, hitting the road sections earlier and undoubtedly enjoying the longer nights of sleep. Today’s hit was a 9.73@ 140mph. Craig Moar has been trying all kinds of voodoo to get the rear of his big-block Buick to keep the tyres on the sticky stuff, and managed to put a smoother pass down towards the end of the day at 10.18@132mph. His average ET is still looking impressive at 9.99. Jamie Farmer has been trying to get his XH Falcon ute running better, but The Dirty Bird has been leaving droppings across the lanes. Patches of water and oil indicate something isn’t right, and it’s started to attract the attention of the lane crew, who aren’t too keen on cleaning it up. Hopefully Jamie hatches a plan to swoop lower into the ETs. 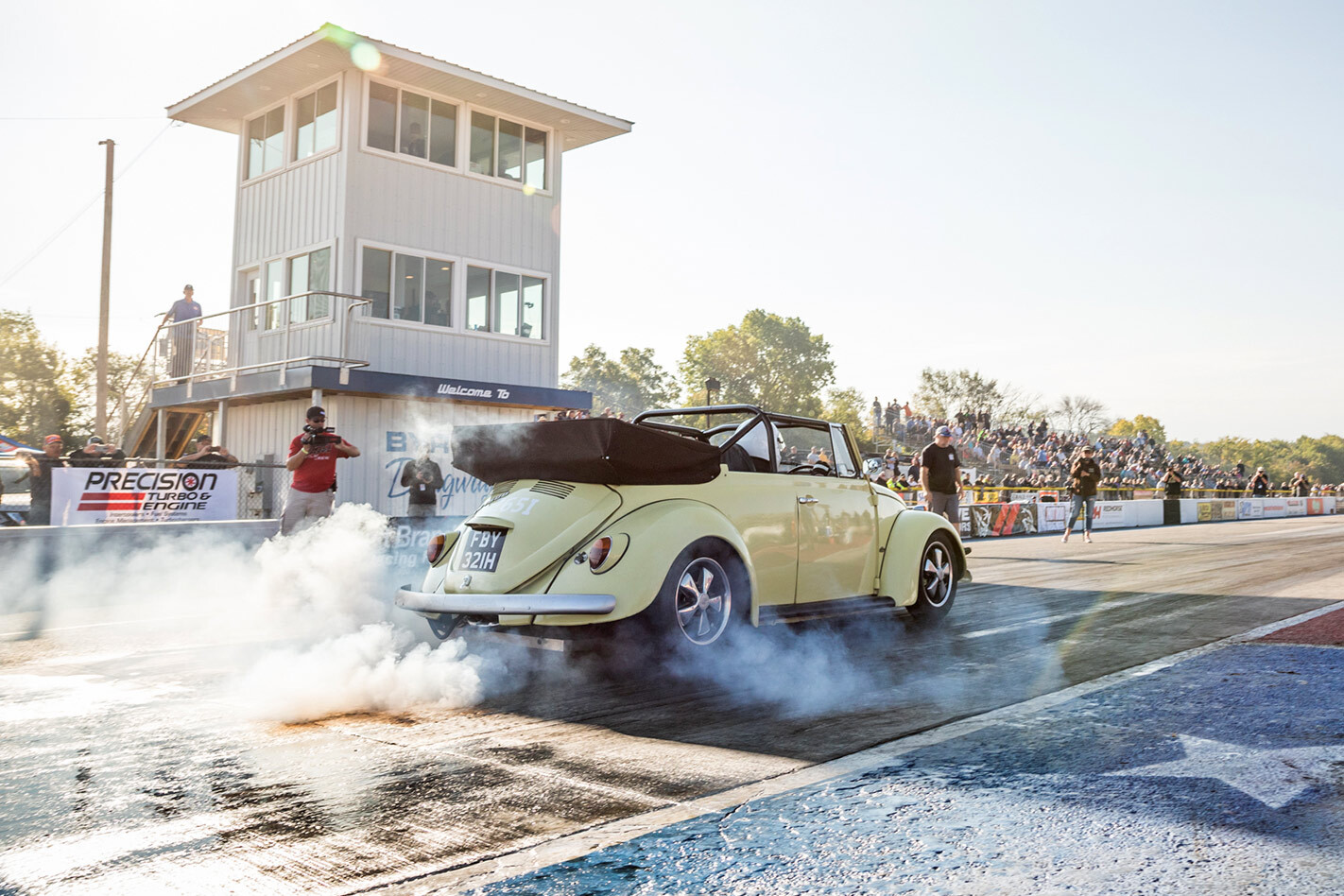 The results halfway through Drag Week show that there are nine cars running average ETs in the sevens, and the lone Dave Schroeder in the sixes club. The war of attrition has put a few of the crowd favourites out of the running, including Pomgolian Richard Webb in the screaming cream VW Beetle Cabrio; Finland’s Janne Uskali in the $1500 ’67 Plymouth VIP, which ran low eights; and Brian Kohlmann in the gnarly lime-green ’31 Chrysler Fuel Coupe running nitro. 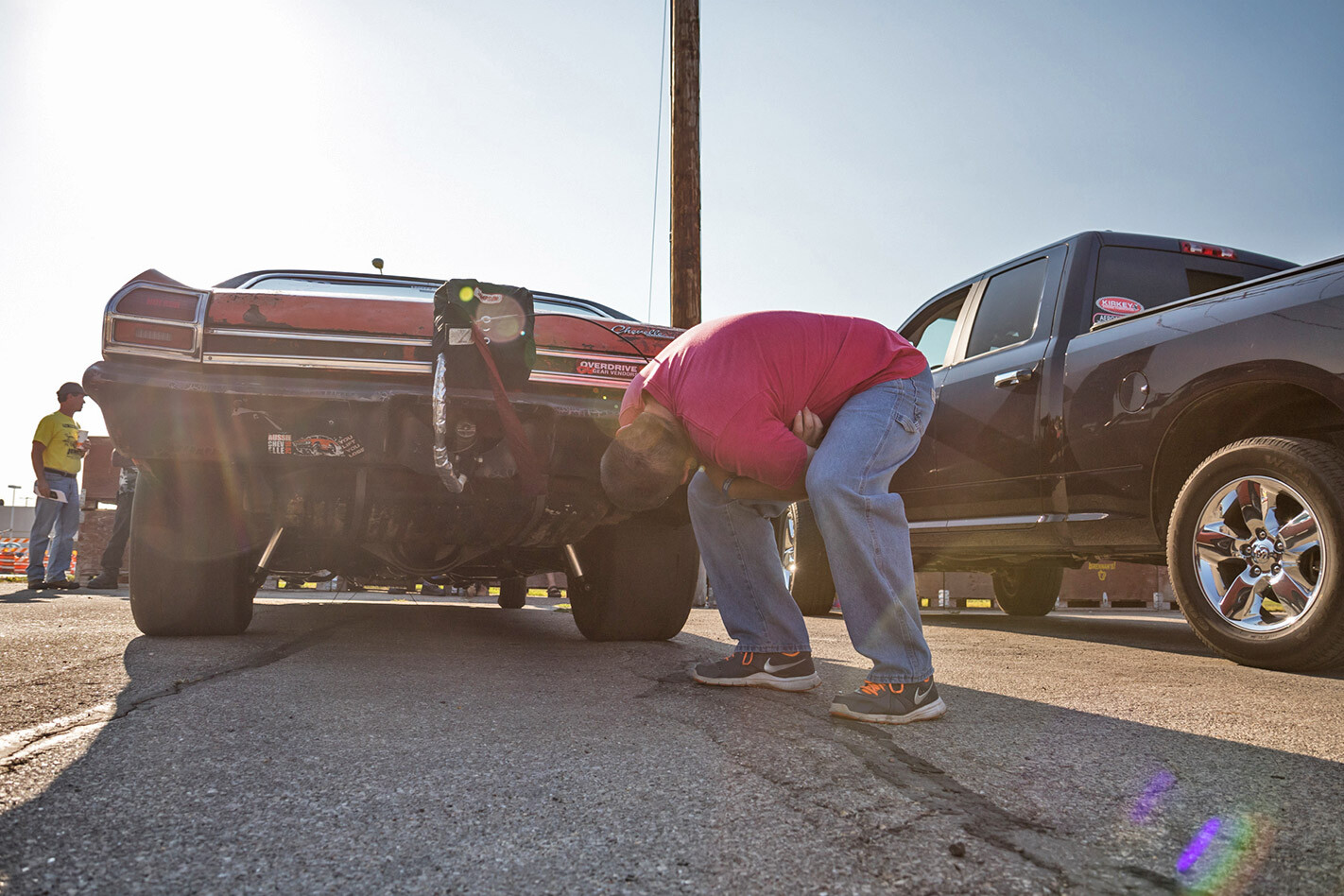 Day Four will see those still rolling take on The Biggest Little Track in the World – Great Lakes Dragway near Union Grove, Wisconsin. It’s recognised as the oldest functioning drag strip in the United States, and usually pulls some pretty large crowd numbers, even on a Thursday in the middle of September. Stay with us as we bring you the results of those who make it and those who break it on the penultimate day of Hot Rod Drag Week 2017!