HOT Rod Drag Week 2017 is now properly into the swing of things – we’ve completed both a full day at the strip and a full road section to further our journey across the Midwest. Day Two saw the near-400-strong mob attack Gateway Motorsports Park in Madison, Illinois, and cooler temps right from the morning meant there was more horsepower in the air. 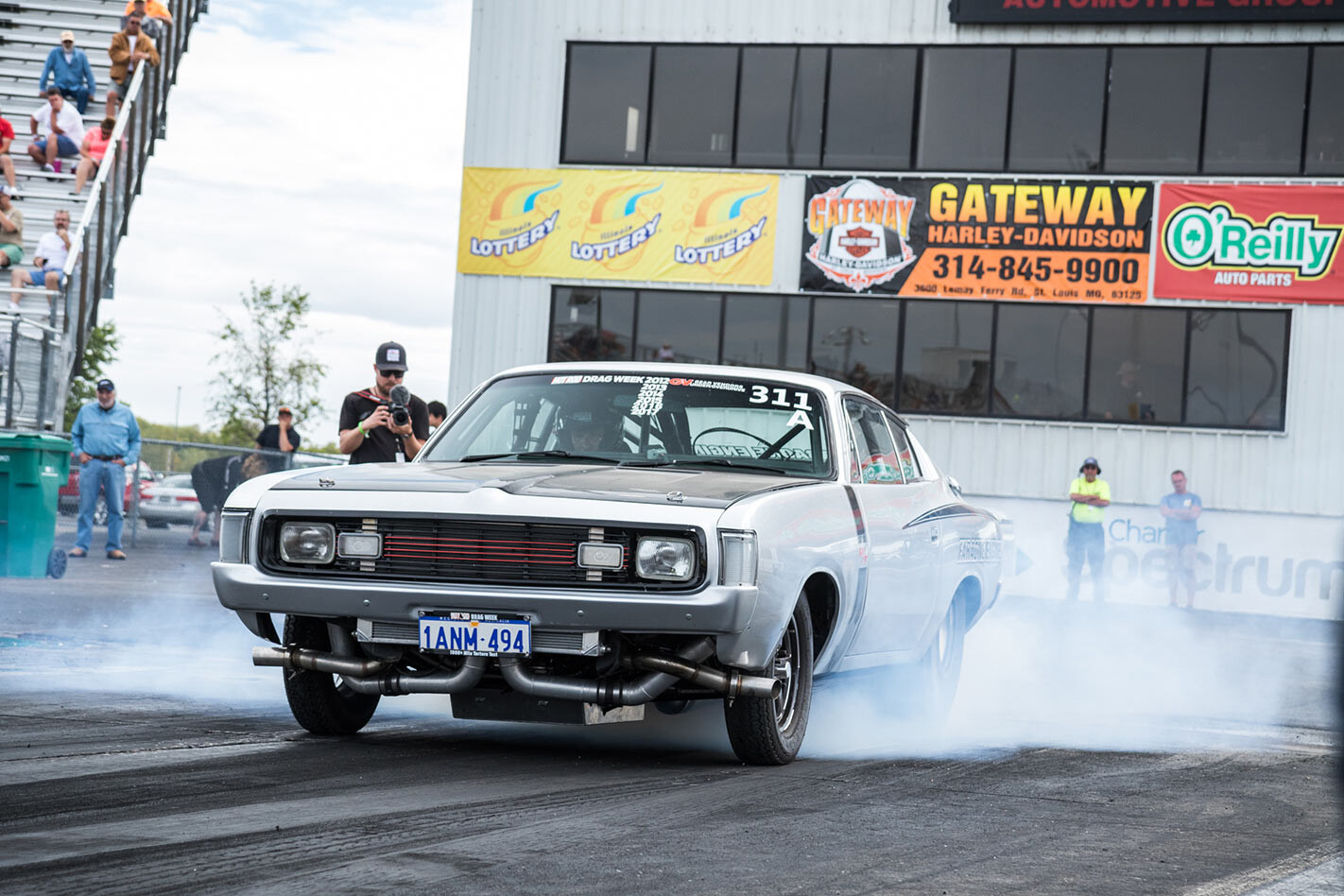 John Faraone’s Charger punched out a 7.48-second pass at 173mph in the afternoon session. With Tom Bailey fragging the bottom end in his Camaro and ending his run for the year, John moves up to second place in the Unlimited class. In typical Top Fuel style, Richie Crampton left a 300ft trail of smoke in his ’57 Chev wagon, before improving on yesterday’s time by half a second, with a best of 8.29@164mph. Stevo the Chevelle made it into the eight-second zone today. Driver Harry Haig ran a handful of passes, with a best of 8.72@158mph. With an average ET of 8.86, he’s sitting in third spot in Street Race Big-Block Power Adder, only three-tenths of a second behind class leader James Karger. 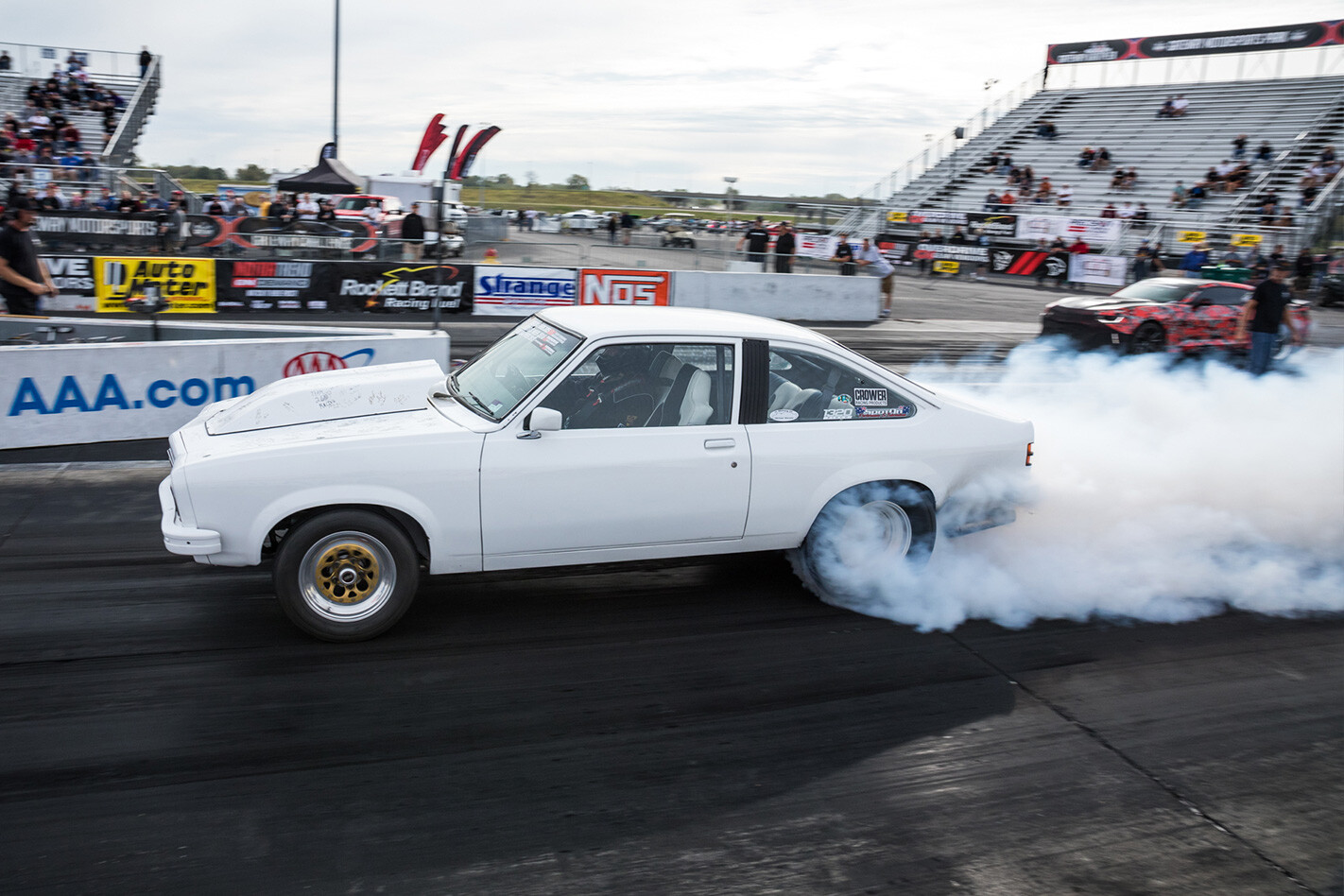 The cooler temperatures and track conditions saw quite a few sets of front tyres airborne, including Brain Jensen’s LX Torana. Brian ran a best of 9.69@140mph and is holding down second in his class. Mark Arblaster’s POR440 Valiant ran a little slower today with a 9.90@141mph, but Arby reckons he’s spotted the cause – the torque management system trips out on hard launches if the tyres break, knocking a bunch of timing out and effectively slowing him down. “I’ve turned that sucker off,” he said, “and I’m looking forward to tomorrow!” West Aussie Craig Moar was struggling to get his Buick Regal to hook up for a clean pass, and even switched lanes a few times in an attempt to get the big-block Chevy’s power down. He ran a best of 10.02@138mph, though his average ET is still in the single digits. Jamie Farmer finally had a bit of fortune with the Dirty Bird XH Falcon and put in a clean hit today with a 9.92@111mph. That is still a long way off what the car is capable of, so hopefully the Bird will fly faster and faster throughout the week. Besides Tom Bailey’s sump full of broken hopes and connecting rods, James ‘Doc’ McEntire ran the first ever seven-second pass on Drag Week for any naturally aspirated class, setting a new record with his 1500hp ’68 Camaro on a 7.99@165mph. Canadian Matt Blasco got everyone right on the edge of their seats after lunch, pedalling his ’72 Dart mere inches away from the centre cones and then the wall before straightening out again and still running a 7.71. The Taylor family (daughter Alex and father Dennis) were having a tough go at Gateway, with Alex withdrawing her orange ’68 Camaro from the competition early after running into some top-end mechanical woes. As for Dennis, he quite literally came crashing down from lofty heights after launching one of the tallest and gnarliest wheelstands we’ve seen at Drag Week in his ’55 Chevy gasser. After smacking the tow ball on the blacktop and popping all four wheels skyward, the resulting bounces made quick work of the front wheels and bent them into tacos.