IF YOU’VE been bitten by the drag racing bug, there are few things better than being able to step back in time and feel like you’re right back at the roots of the sport. Nowadays, it’s quite in vogue to revive traditional events with a big song and dance and a hefty entry fee, but one place you’ll never need to make sure you’re wearing period-correct leather chaps is on the runway at Eagle Field airbase. 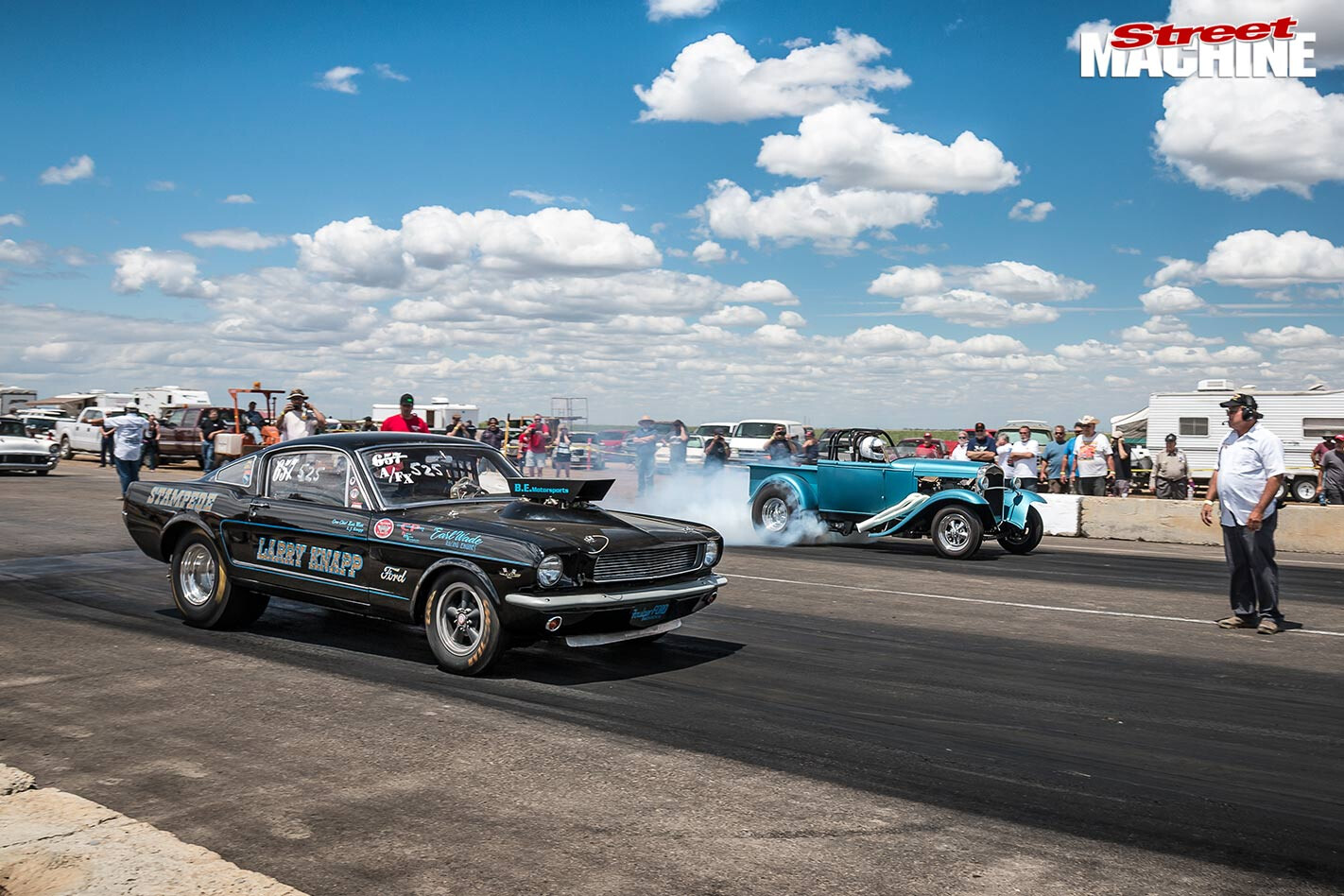 Situated in Firebaugh, California, roughly halfway between San Francisco and Los Angeles, Eagle Field opens its gates each May for nostalgia drag racing in its purest form: heads-up, flag-drop eighth-mile grudge matches. It’s a real throwback to the gritty racing of the 1950s and 60s, with low-tech track facilities, open pit and staging lane areas, and tiny, weather-beaten bleachers.

Once you drove through the gates for this year’s event it was pure pandemonium. Oil-stained drivers lay in the dirt to wrench under their cars, while quads and pit bikes zipped past terrifyingly close to punters. The aromas of barbecue, cigars and avgas were heavy in the air. 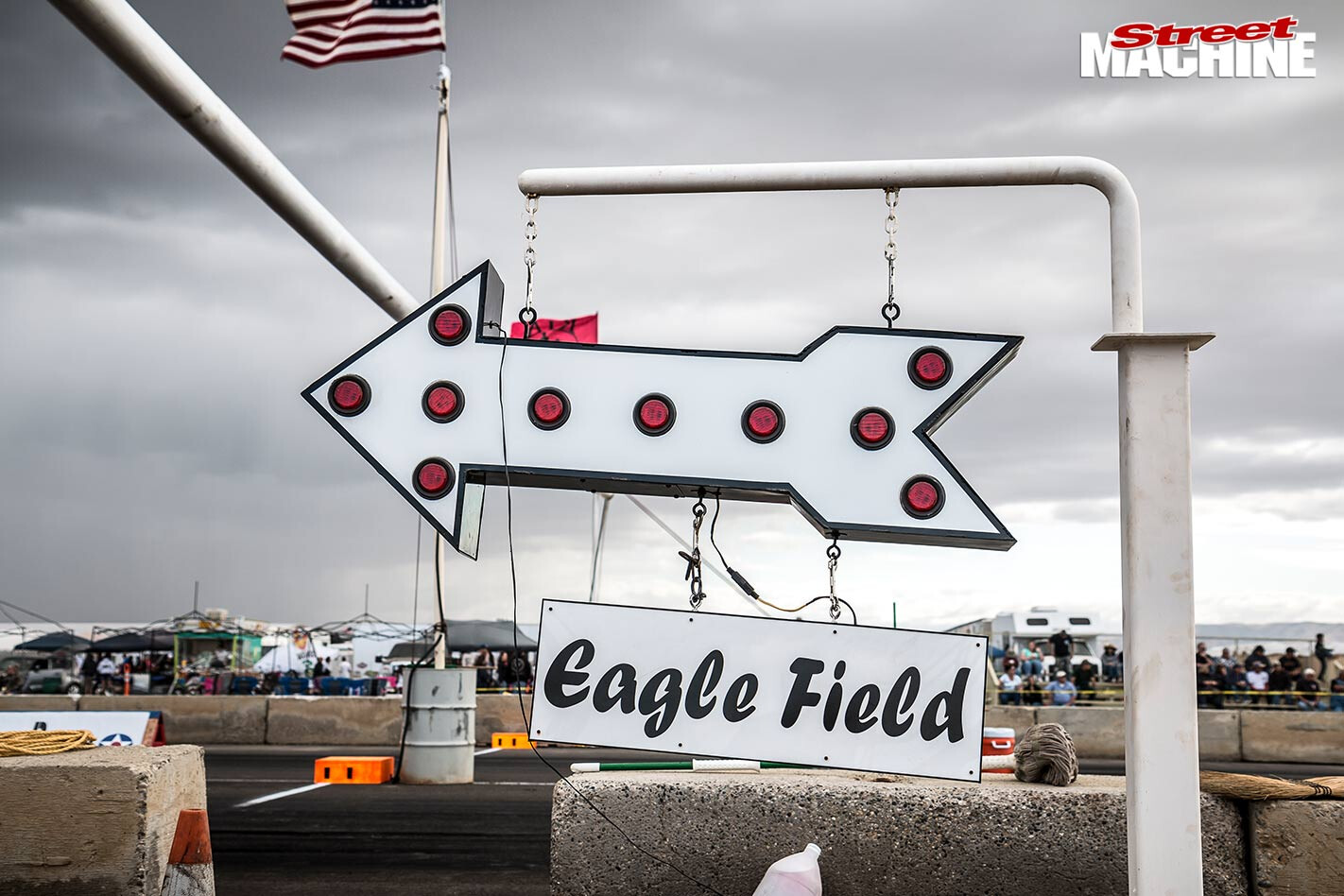 Safety was minimal. The fence was knee-high to a grasshopper and spectators stood wherever they could find space. The potholed dirt return road acted as the only boundary between them and the racing. The burnout pad was well-grooved and cracked, and there were no timing lights up on the startline. The track official waved each car forward until the front wheels hit a faded white line – give or take. The short Native American gentleman with the green flag and a feather in his ponytail was long-time official Eves, who’s been involved in Californian drag racing since the first days of the Fremont Drag Strip in the 1950s. He was the Christmas tree at this track!

Drivers came from all over the west coast, and the racing was quick and constant. As soon as the flag dropped and racers howled off the line, two more cars were already smoking their bags and creeping forward. 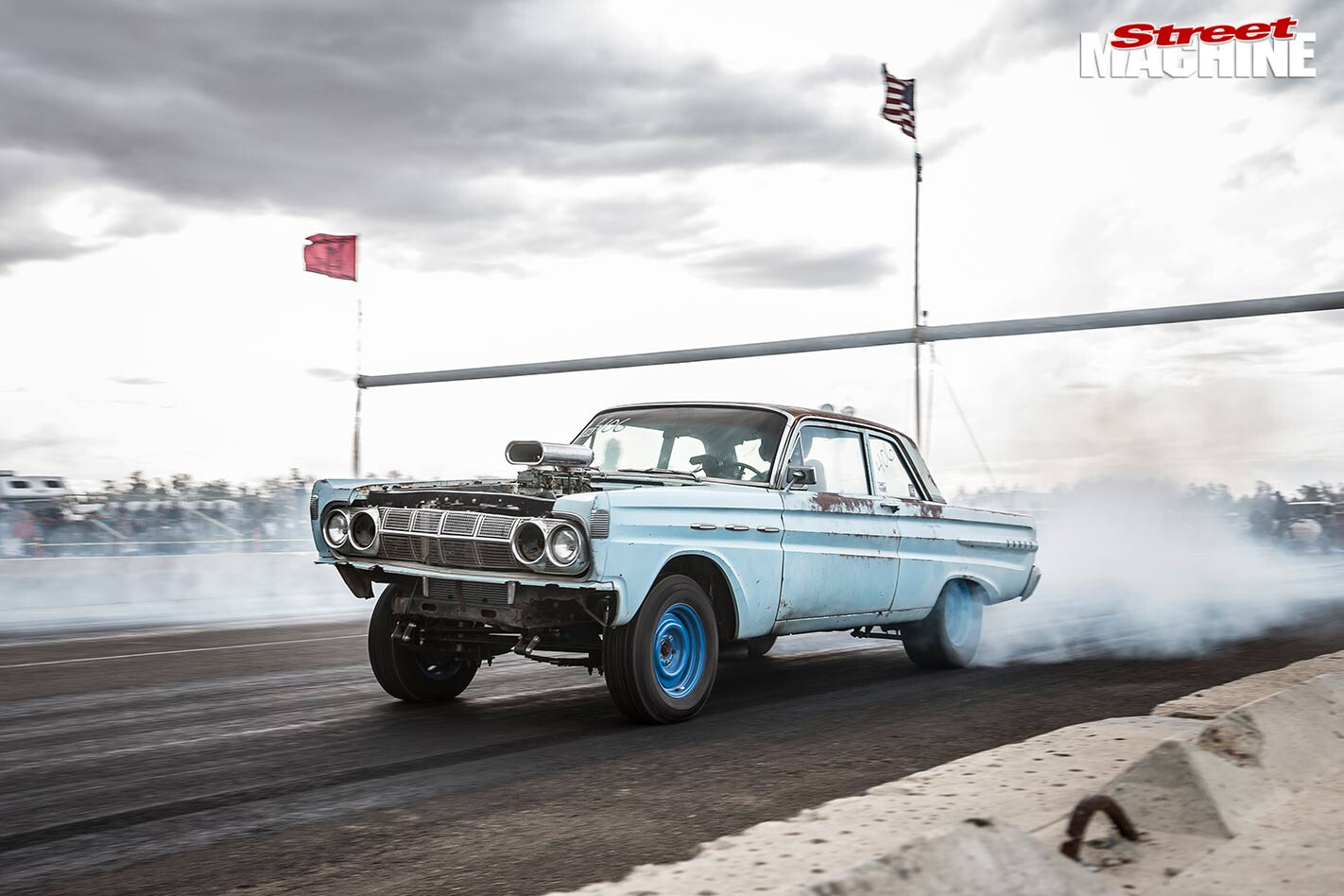 The schedule called for a whole day’s racing broken up by some classic exhibition drawcards, including The Beast jet drag car piloted by Jeff Atamian, and wheelstanding performances by dragstrip stalwart ‘General’ Jerry Lee and his son Hoss. The hoots and hollers from the crowd drove home how popular these cars still are, and everyone cheered as a haphazard cacklefest procession idled past on the return road, kicking up dirt and deafening children.

There were no defined competition brackets or dial-ins, just pre-1973 cars filling the sunny Californian air with noise and tyre smoke. In between all the hot rods, gassers and early muscle, the almighty roar of nitro Hemis reverberated as Pure Hell and Revelation fired up for some friendly passes (read: eighth-mile smoke shows). Two of the angriest nostalgia drag cars on the west coast, they were both covered in bright candy red paint and were ready to cause a ruckus. The Pure Hell fuel altered was pedalled by both Larry Huff and Brian Hope (whose father Ron is owner/driver of the infamous Rat Trap altered). Revelation was piloted by Randy Winkle.

The Camfather, Ed Iskenderian, sat calmly right near the fence at the burnout lane, happily observing the kinds of cars he’s been around for nearly a century. Though understandably hard of hearing, the energetic 94-year-old was out and about shaking hands and having photos taken. Isky spent a bit of time on Aussie shores up in Queensland when he was in the air force during WWII, flying military supplies to the Pacific Islands. He said he loves Australia, but can’t stand Vegemite! 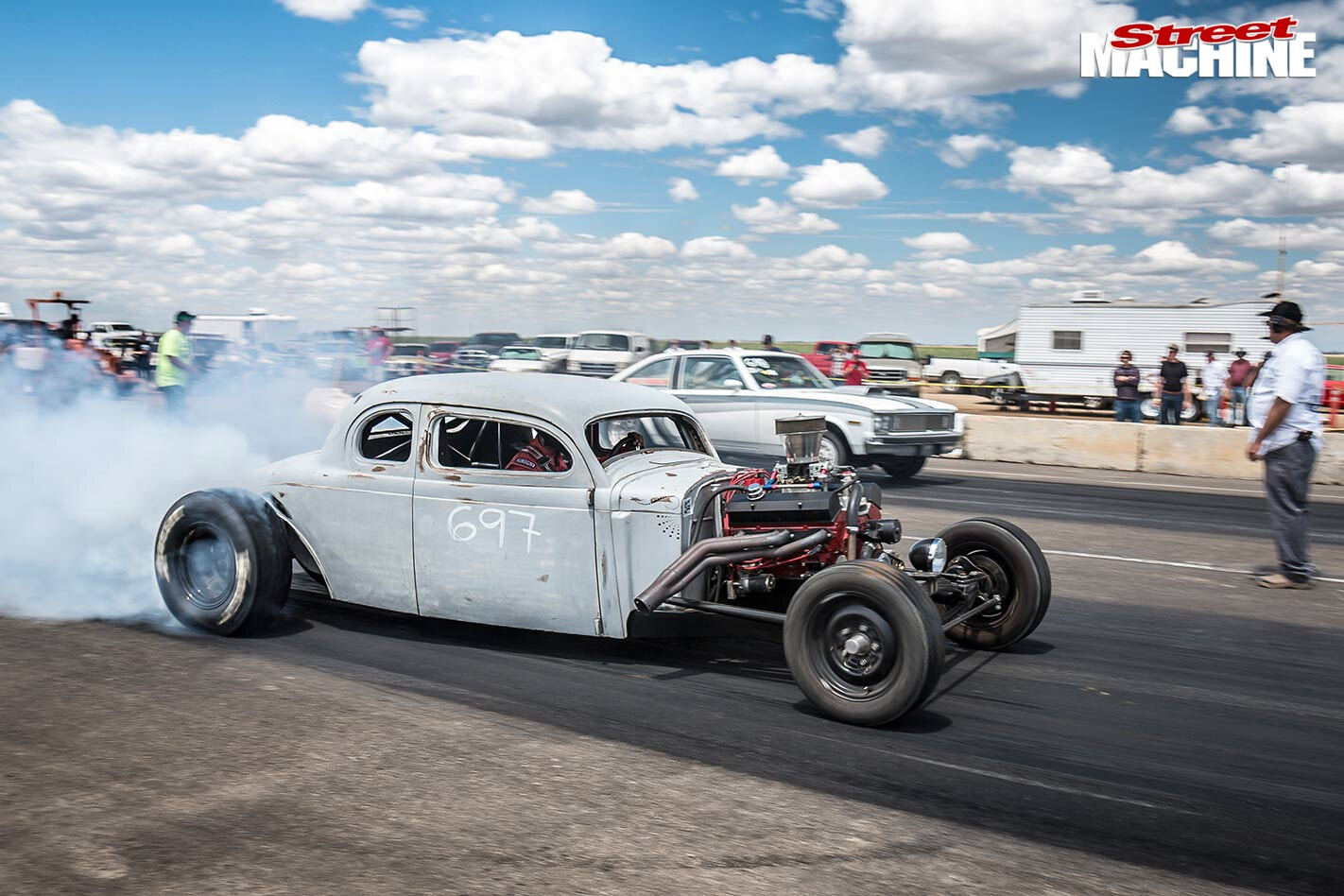 Once the official events were at an end, a cry from the announcer went up: “If your nose is in the sky and your rear end can smoke ’em, then your number is called!” That was the cue for some sunset gasser races for all eligible pre-’65 cars, put on by Portland’s Estranged Car Club. The idea was simple: keep racing until sundown, and some club picks would be handed out at the end, with no real winner. With a storm on the horizon, the action took on an apocalyptic aura, with tooth-and-nail racing and constant smoke shows continuing for nearly four hours.

After the last pass of the evening, the Estranged boys gathered around member Nate’s radically modified Model A altered The Loose Tooth and handed out their copper-plated awards. One was Best Period Survivor, which went to Aaron Von Minden, the custodian of a super-cool original nitro dragster that was built in the 50s but never even got painted before its racing days were up.

In the diminishing light the crowds slowly rolled out onto the farm roads and back into the 21st century, having spent the day in a different era, enjoying the raw grassroots racing of the good ol’ days. 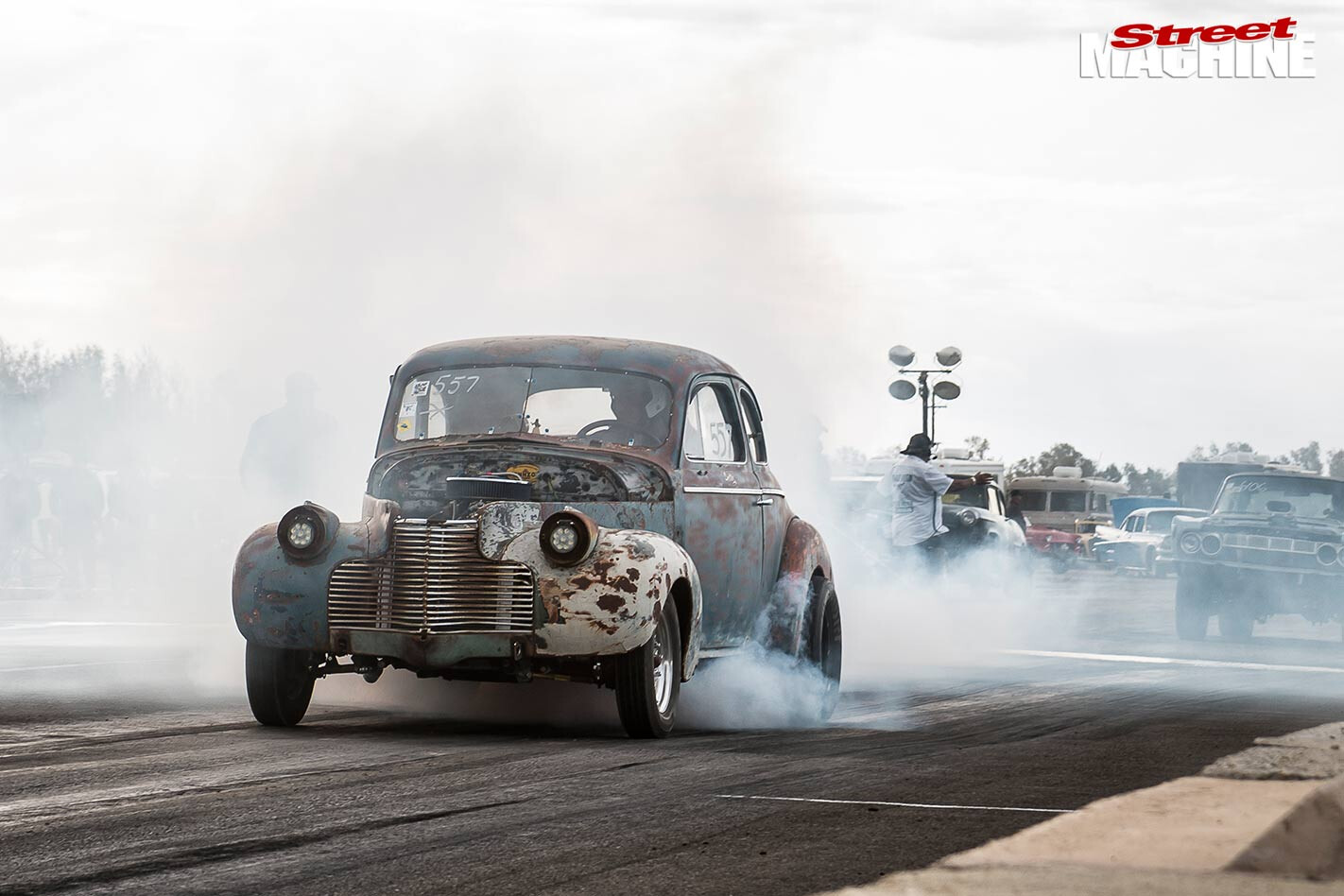 1. Scott Simons brought his ’40 Chev, Gotcha, to Eagle Field and was a competitive force in the gasser drags in the late afternoon. The heavy-patina coupe is powered by a Corvette 350 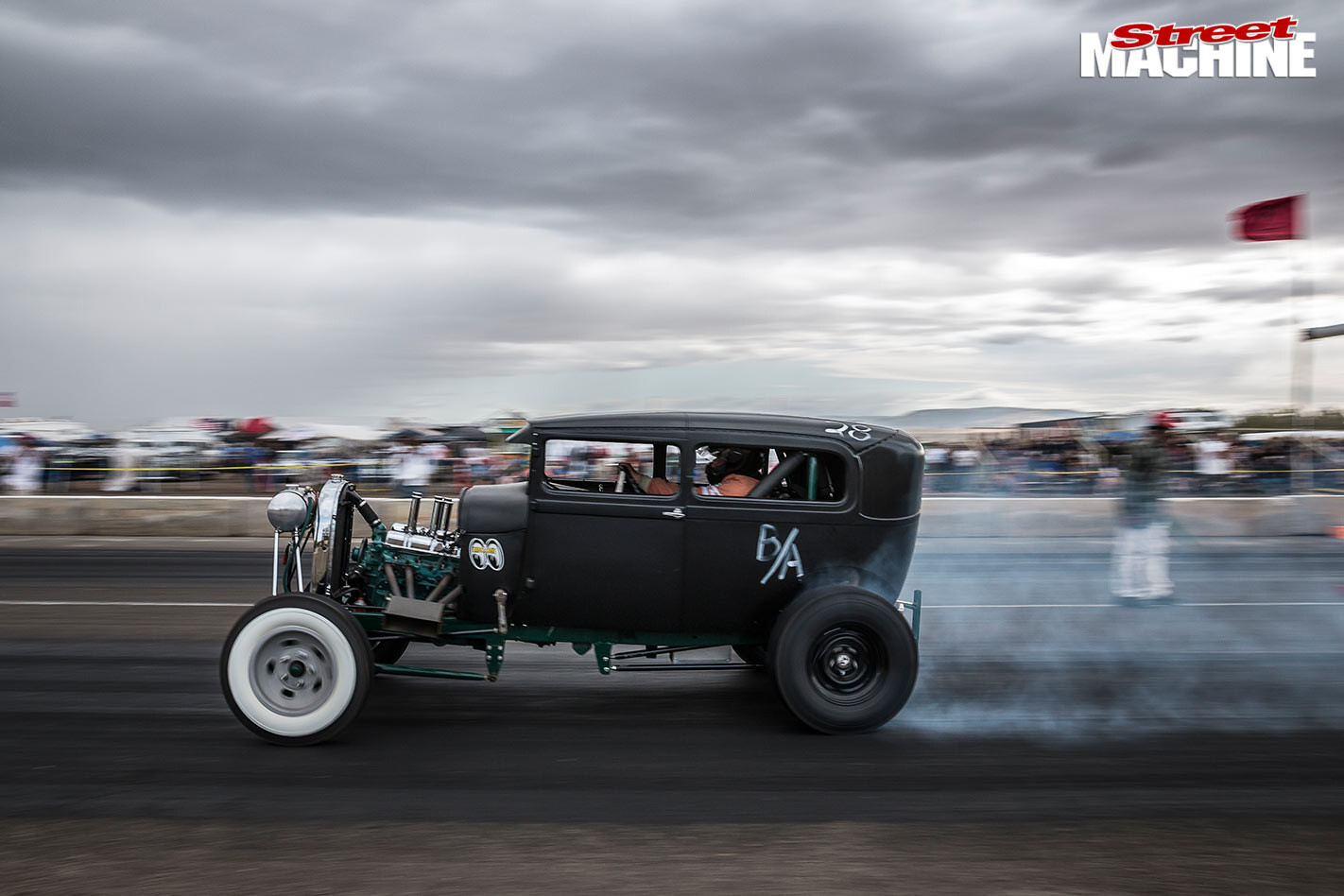 2. Washington man Roger Burton put on great smoke shows all day in his 1928 Ford tudor, powered by a Hilborn-injected nailhead 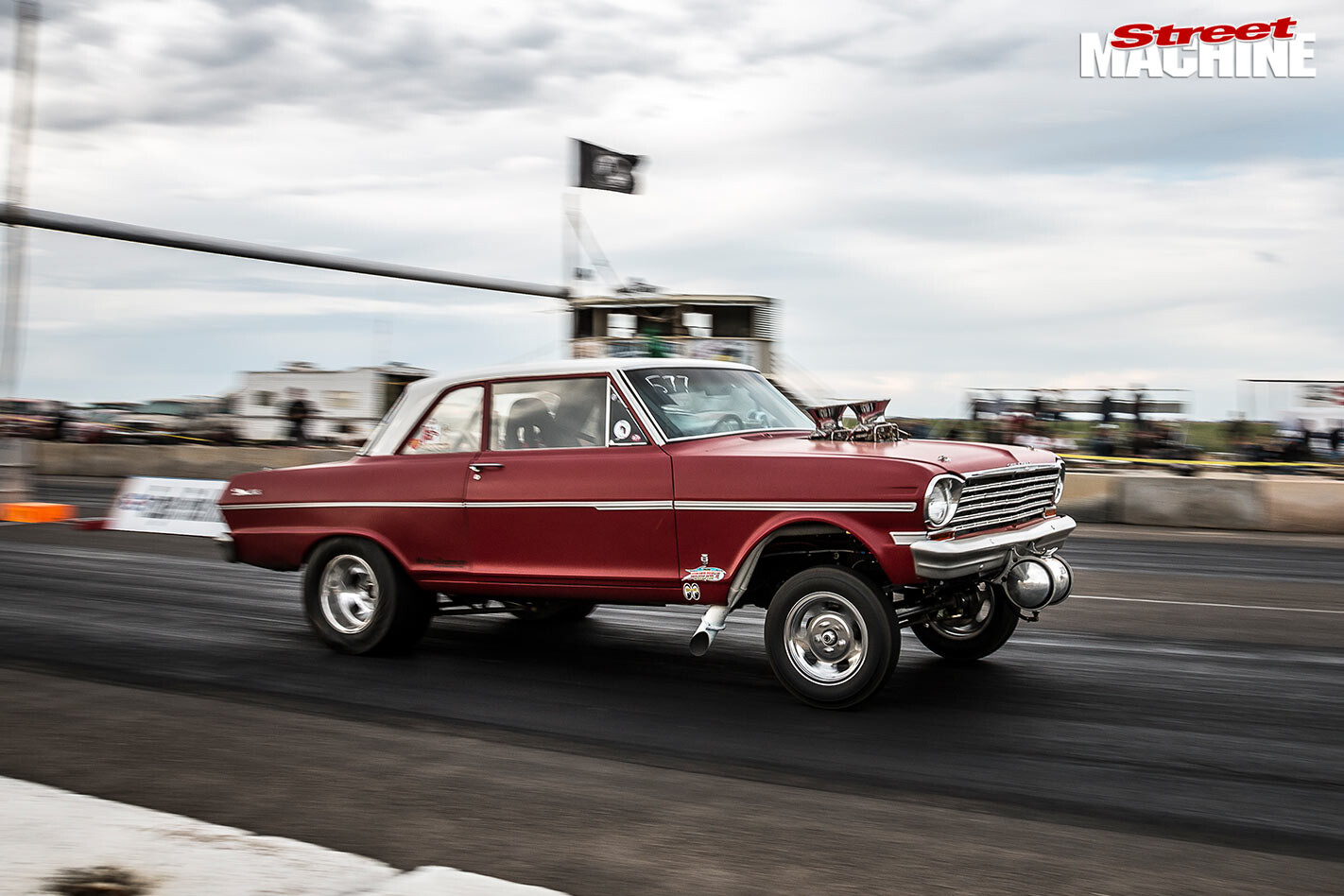 3. Joe Hickenbottom was out racing his red Chevy II Nova in the afternoon’s gasser wars after piloting his Plymouth, Leggin’ It, earlier in the day 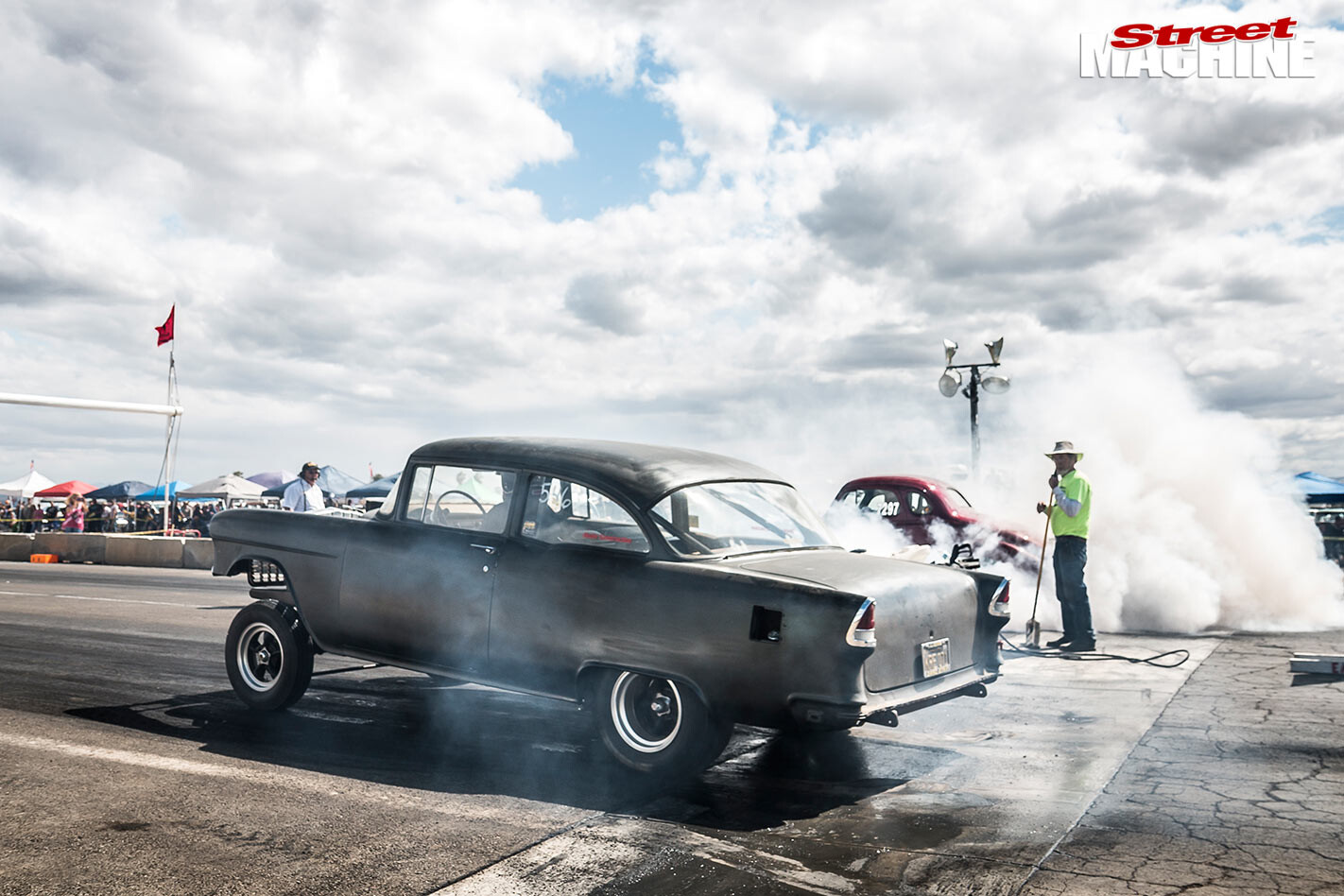 4. Jeff Jones was keeping it real in his rattle-can black ’55 Chevy gasser. The Californian car was a real throwback to early drag racing days, with Jeff absolutely wailing on the small-block and the rear tyres 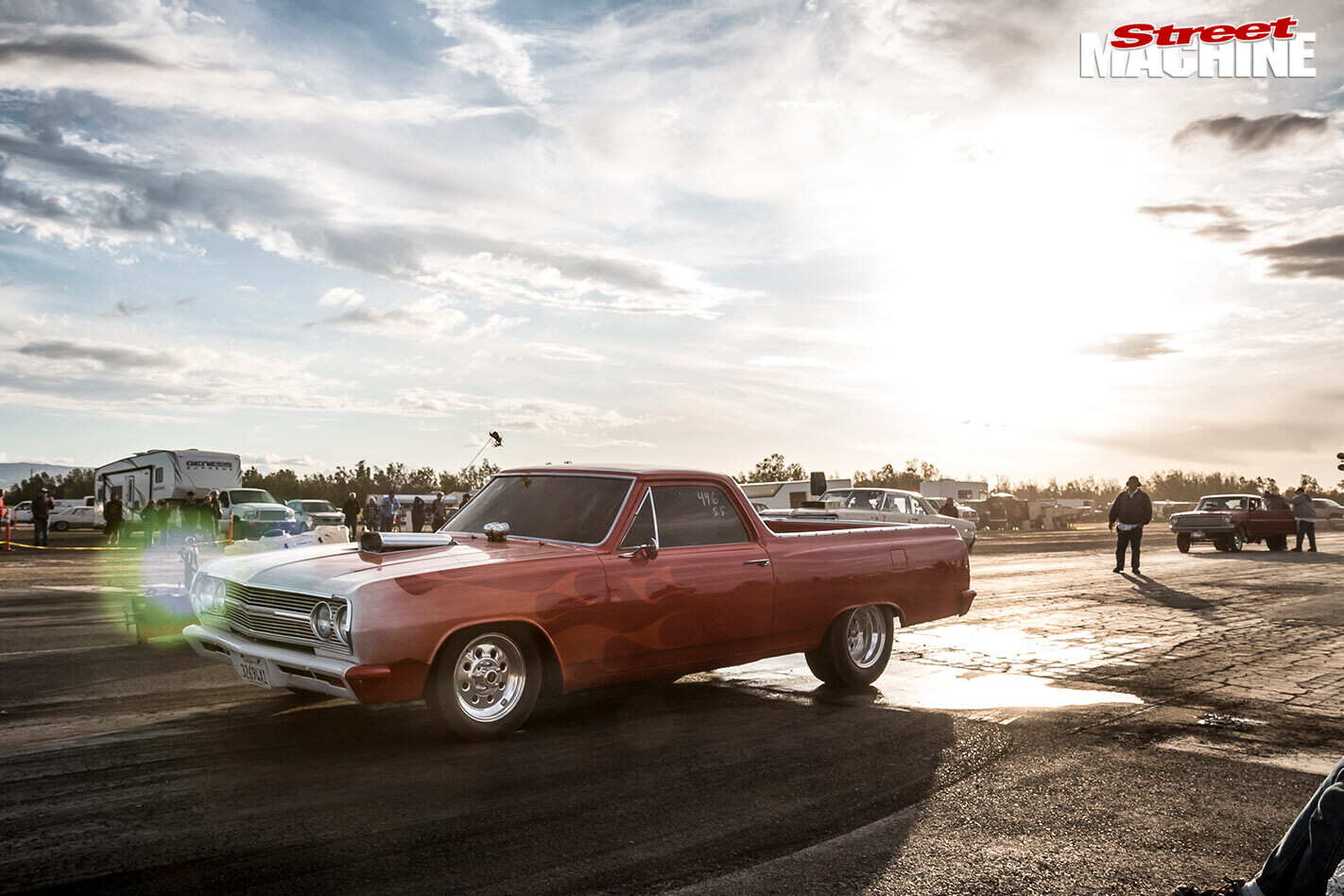 5. Rob Stenifore’s El Camino stood out amongst the nose-up gassers and was very competitive, looking more like an Aussie street machine than a Yankee nostalgia drag car 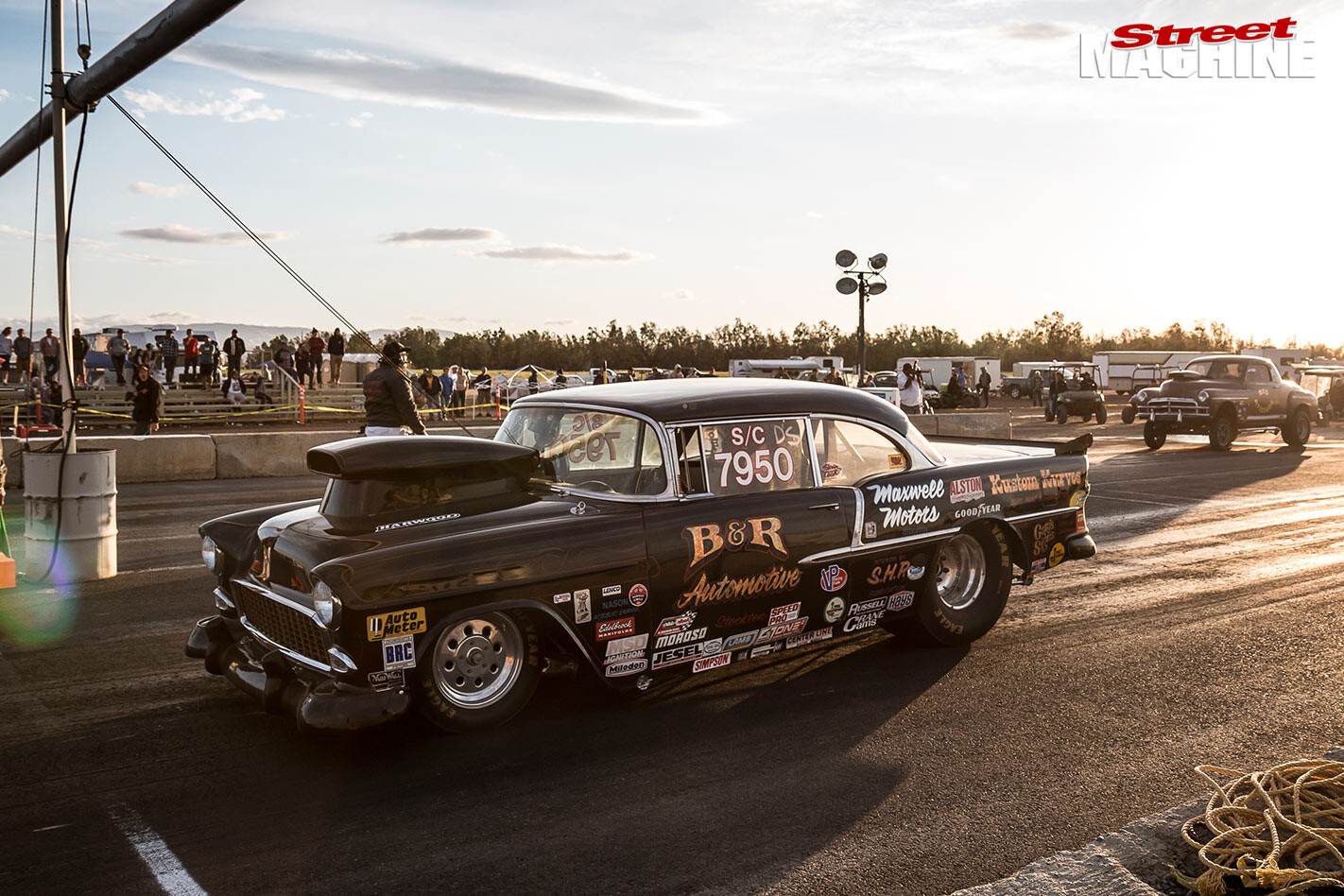 6. Santa Cruz local Joe Tomasello was ready for business as the sun went down. His ’55 Chevy is a great representation of the kind of cars that started the early Doorslammer/Pro Mod class – full steel body, radical scoops and giant meats 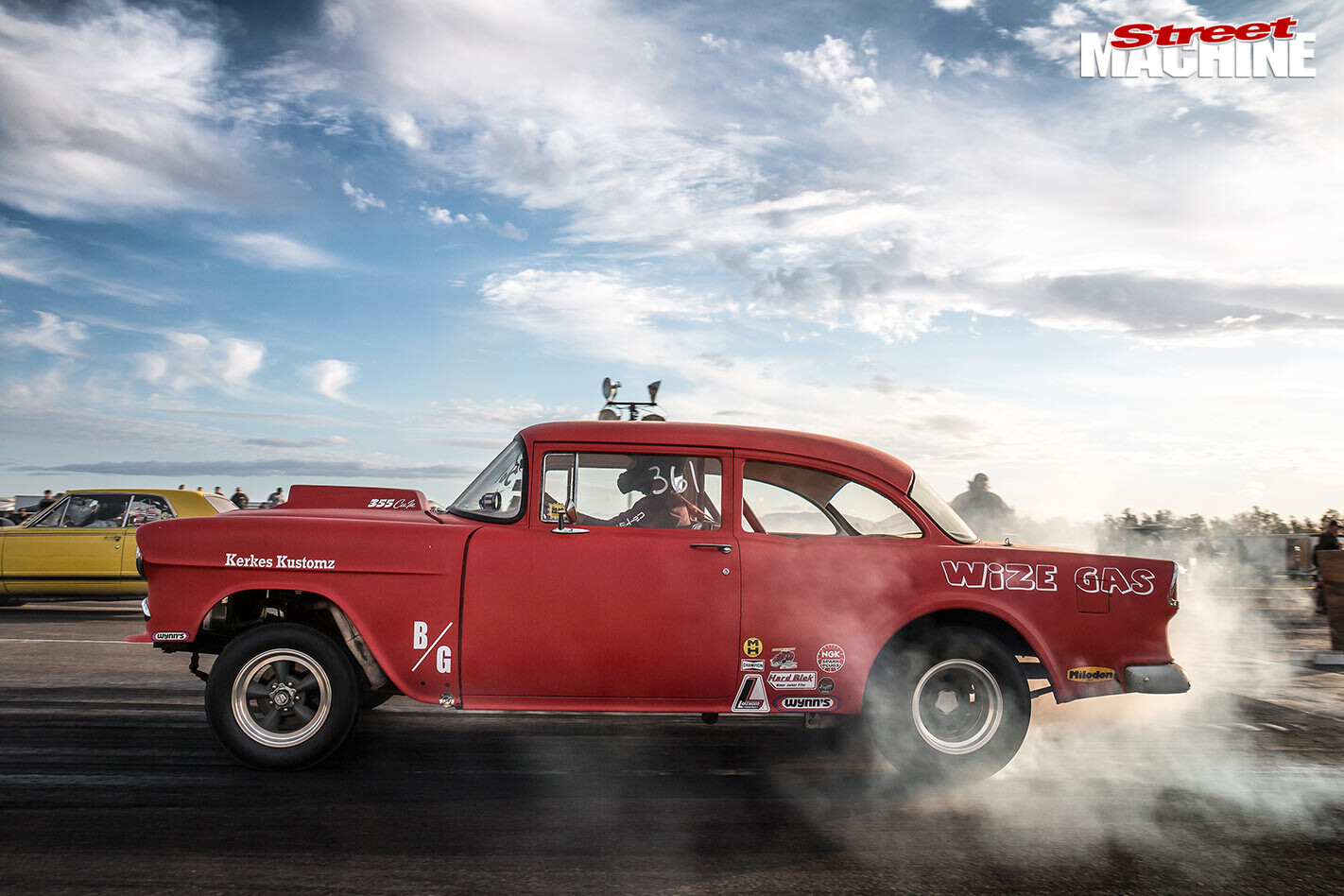 7. The Kerkes Kustomz gasser, Wize Gas, made an appearance at the sunset gasser wars and was piloted by Matt Cookes 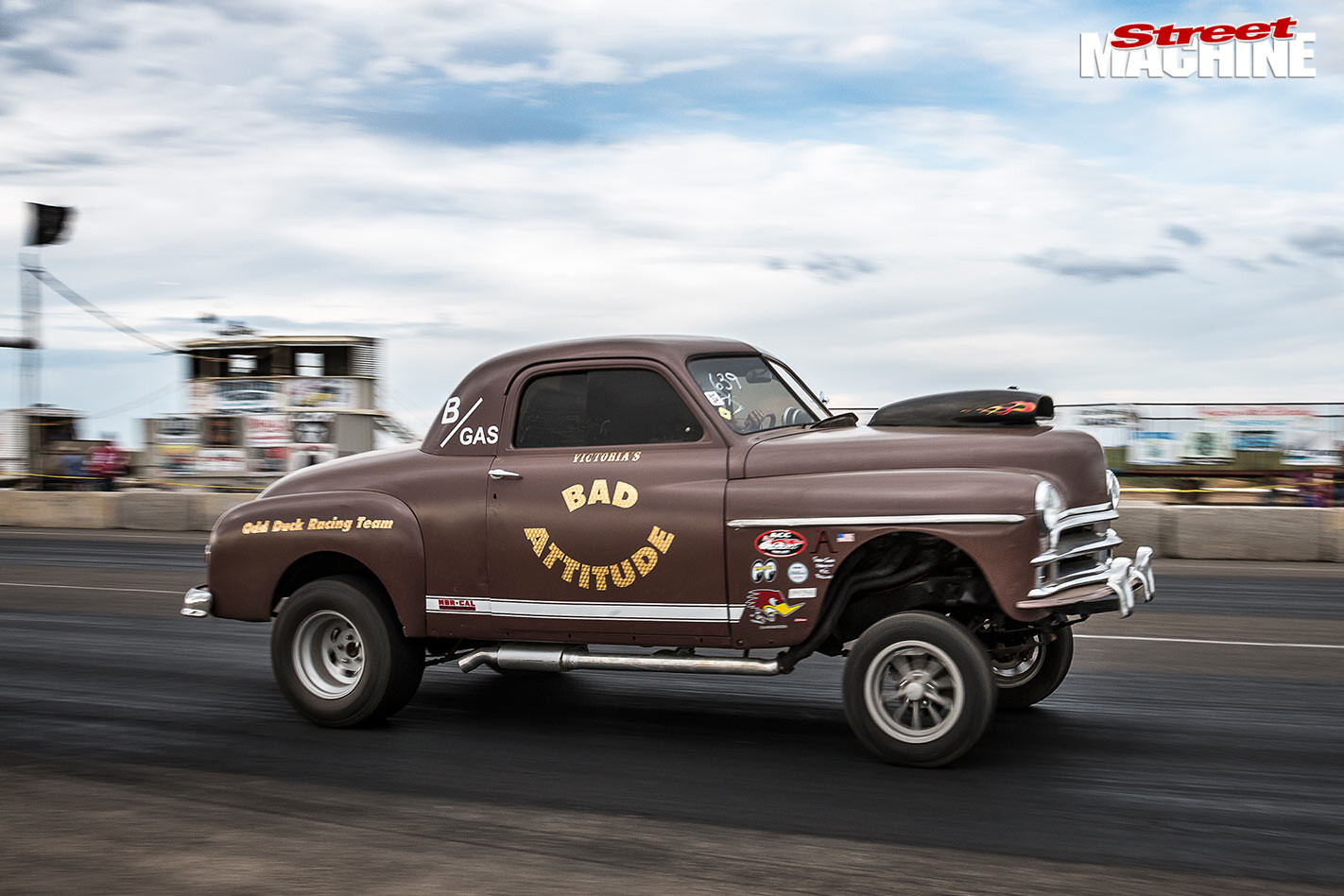 8. Sixteen-year-old young gun Victoria Anders has been racing her Plymouth gasser, Bad Attitude, for a few years now. She only just got her driver’s licence! 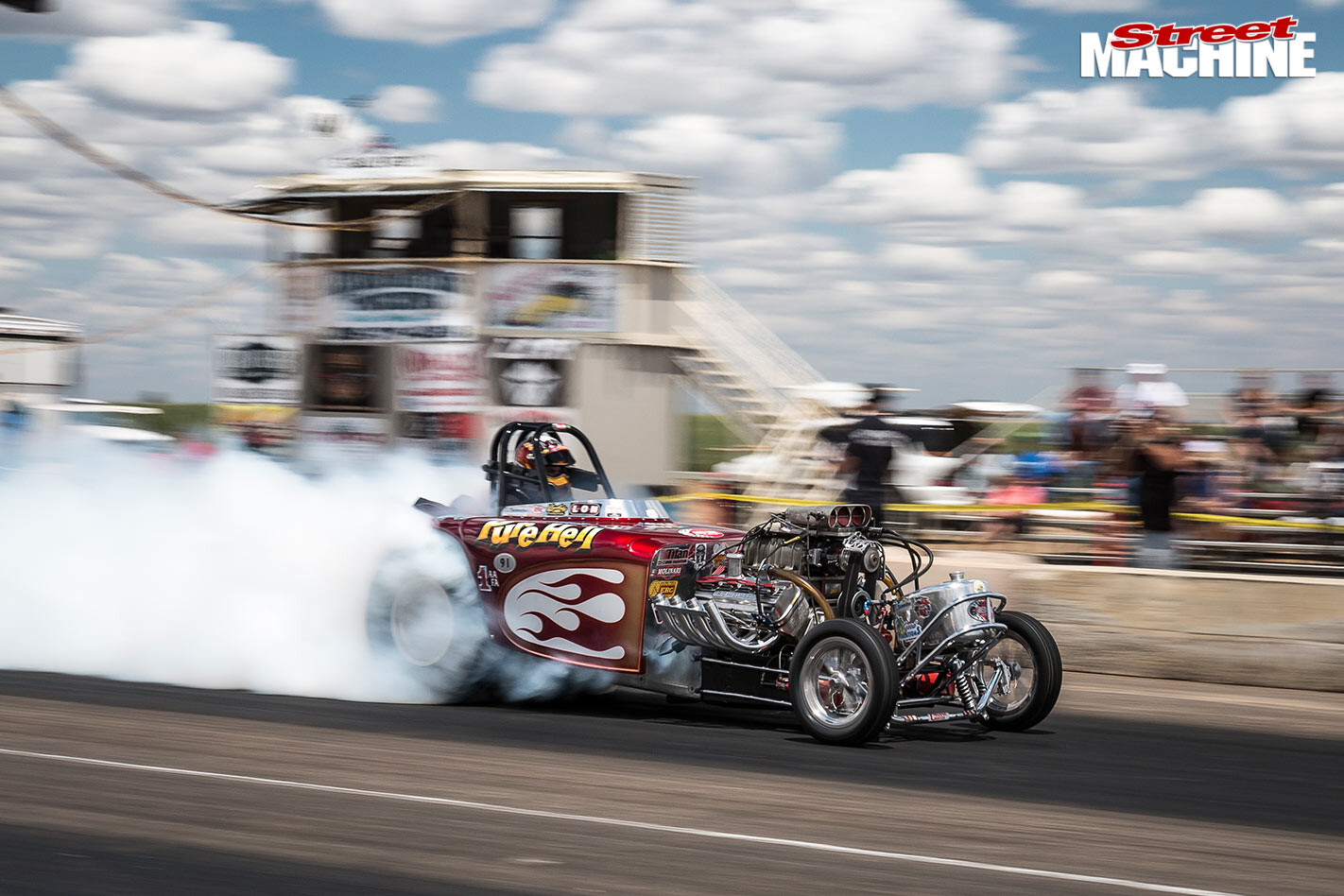 9. Pure Hell was built in the early 60s and was initially small-block Bowtie-powered. By the late 60s it was fitted with a 218mph-capable Hemi in the pursuit of victory. These days it’s retired from competitive racing, but is powered by a Rich Guasco-built blown Hemi running on nitro

10. Randy Winkle and Revelation get ready for a nostalgic exhibition face-off against Pure Hell, another long-service nitro drag car. Revelation was built by Stormy Byrd and had great success over its decades-long campaign. It even raced in New Zealand in 2012 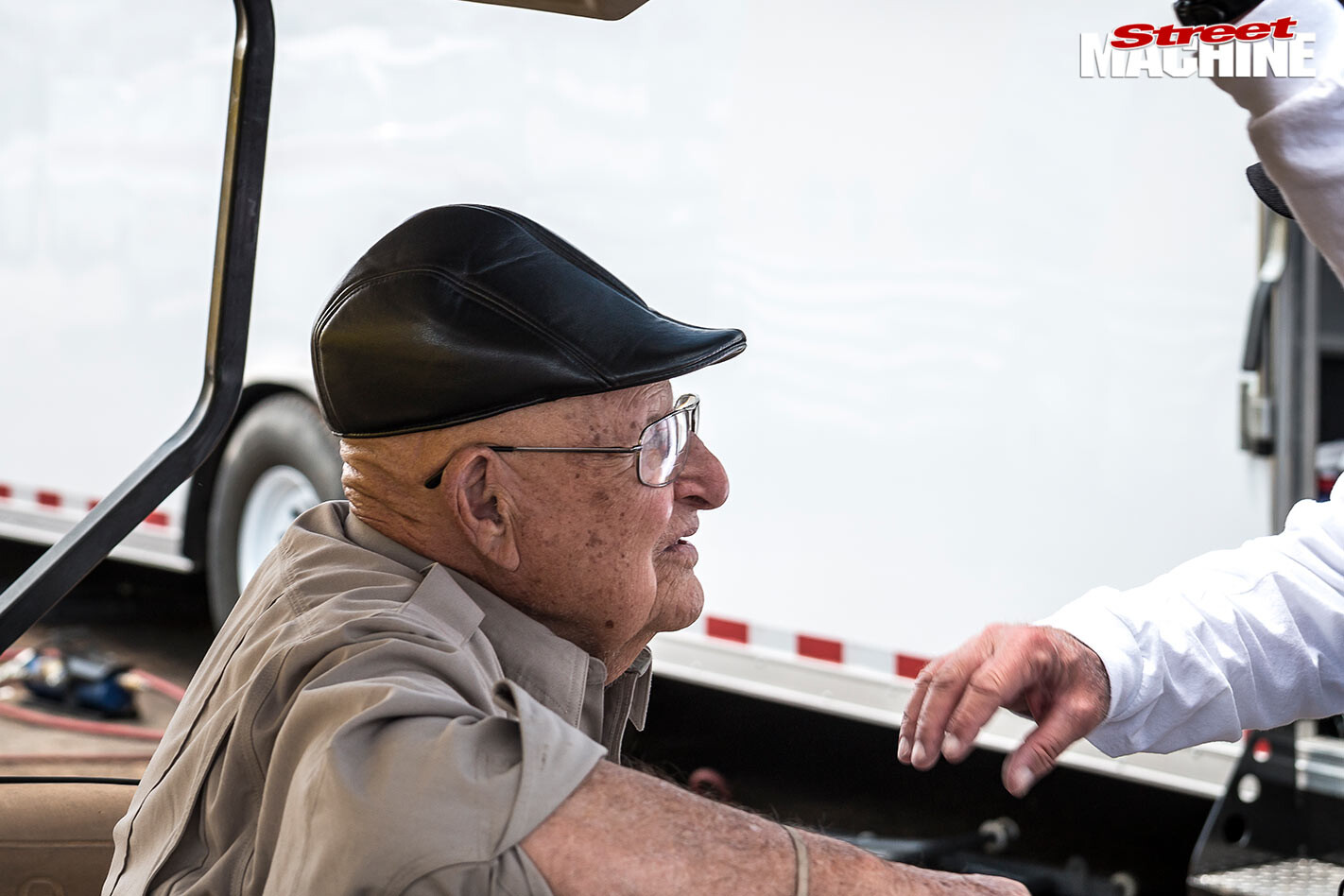 11. Ed Iskenderian is 94 years old and still getting amongst the action at the races. A polite and sharp gentleman, he said he had spent a bunch of time on Aussie shores, but can’t come to terms with Vegemite 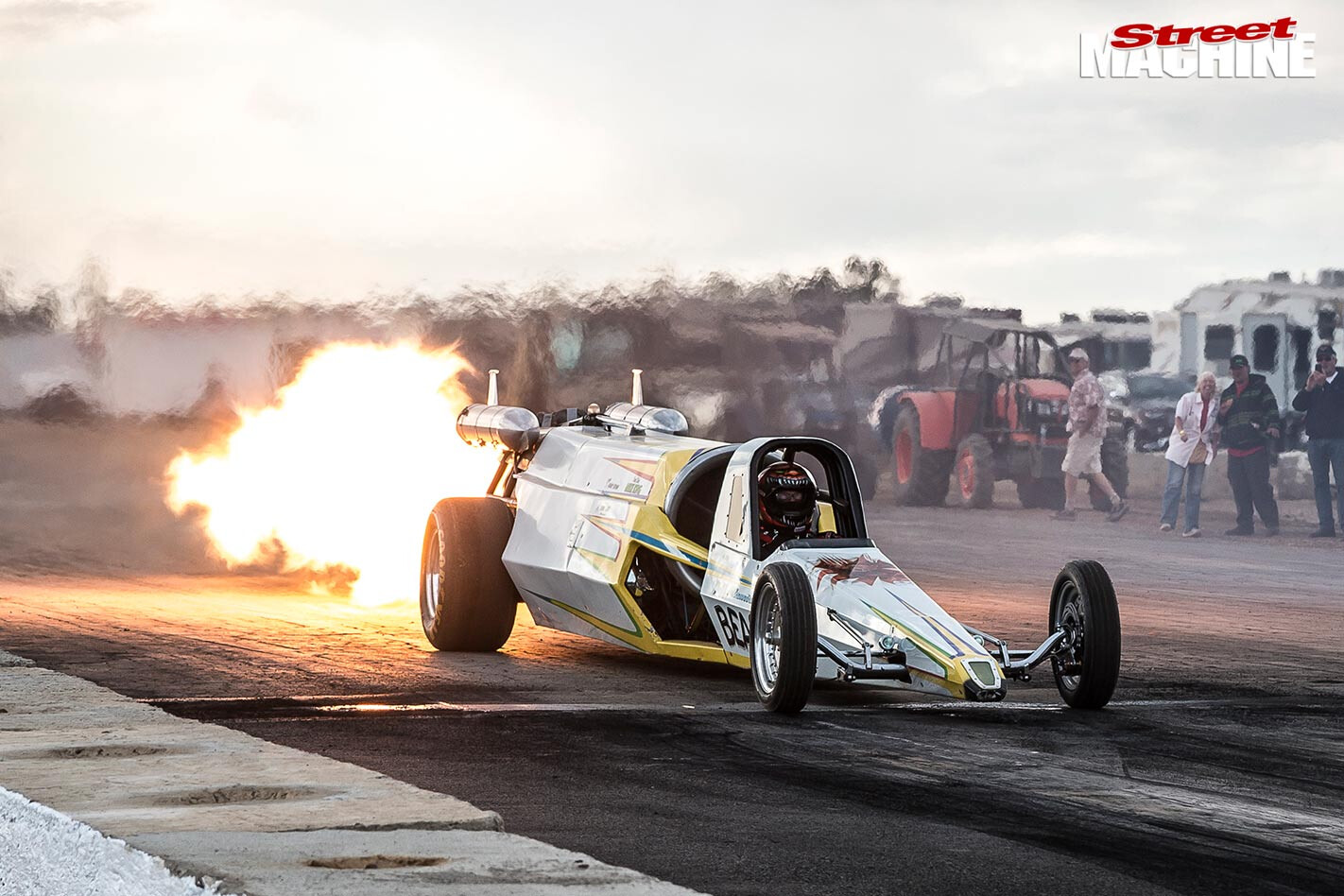 12. There’s no greater spectacle for punters than a jet drag car. The chest-thumping power of the engine, the noise, the heat – it all makes for an exciting pass down the drag strip. Jeff Atamian brought out The Beast to wow the crowds at Eagle Field. It’s powered by a Westinghouse engine out of a Banshee jet fighter from the 1960s 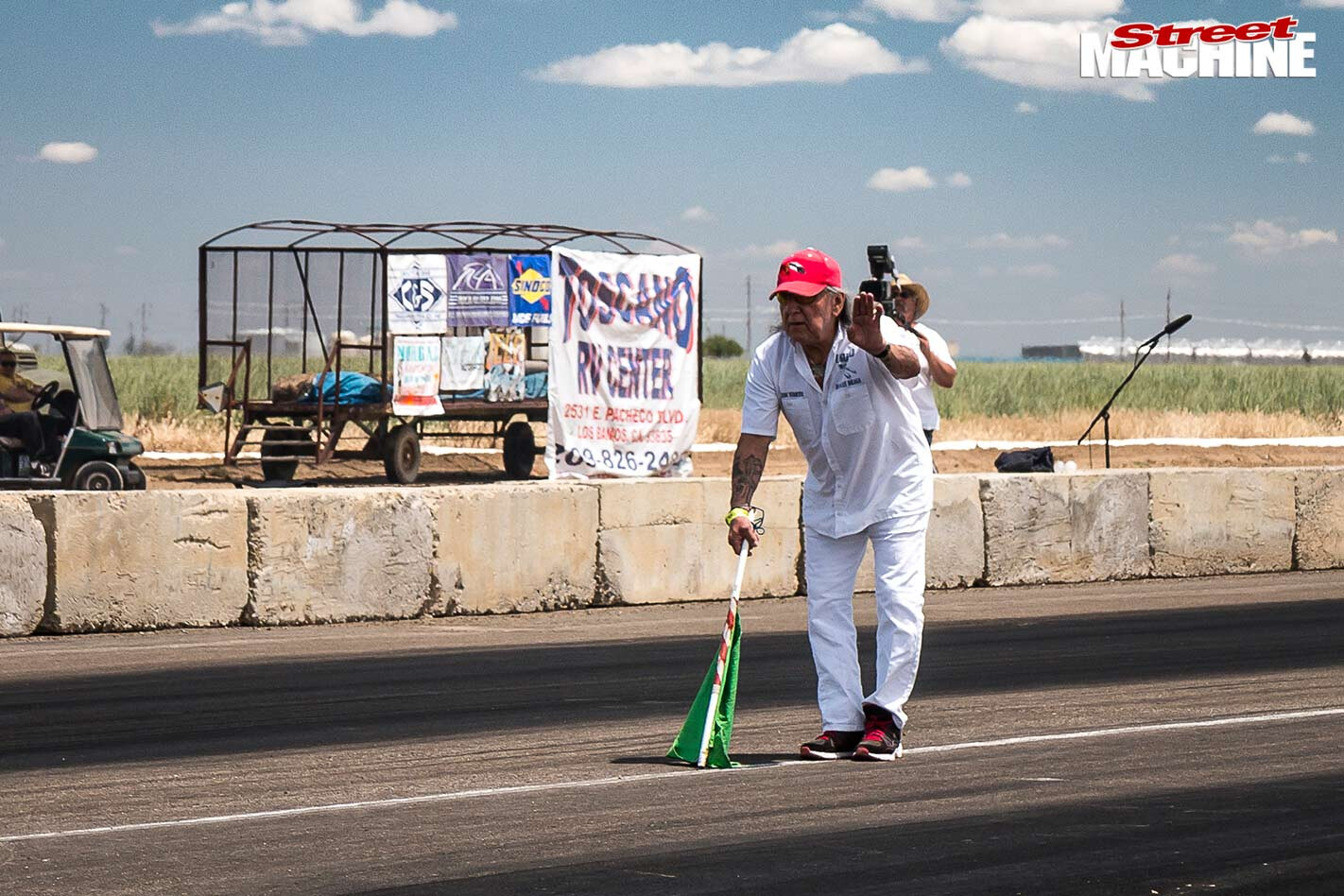 13. Eves Tall-Chief has been officiating at Californian drag strips ever since Fremont opened its doors in the 50s. At the heads-up Eagle Field drags, he acted as the starting light, with the drop of that green flag 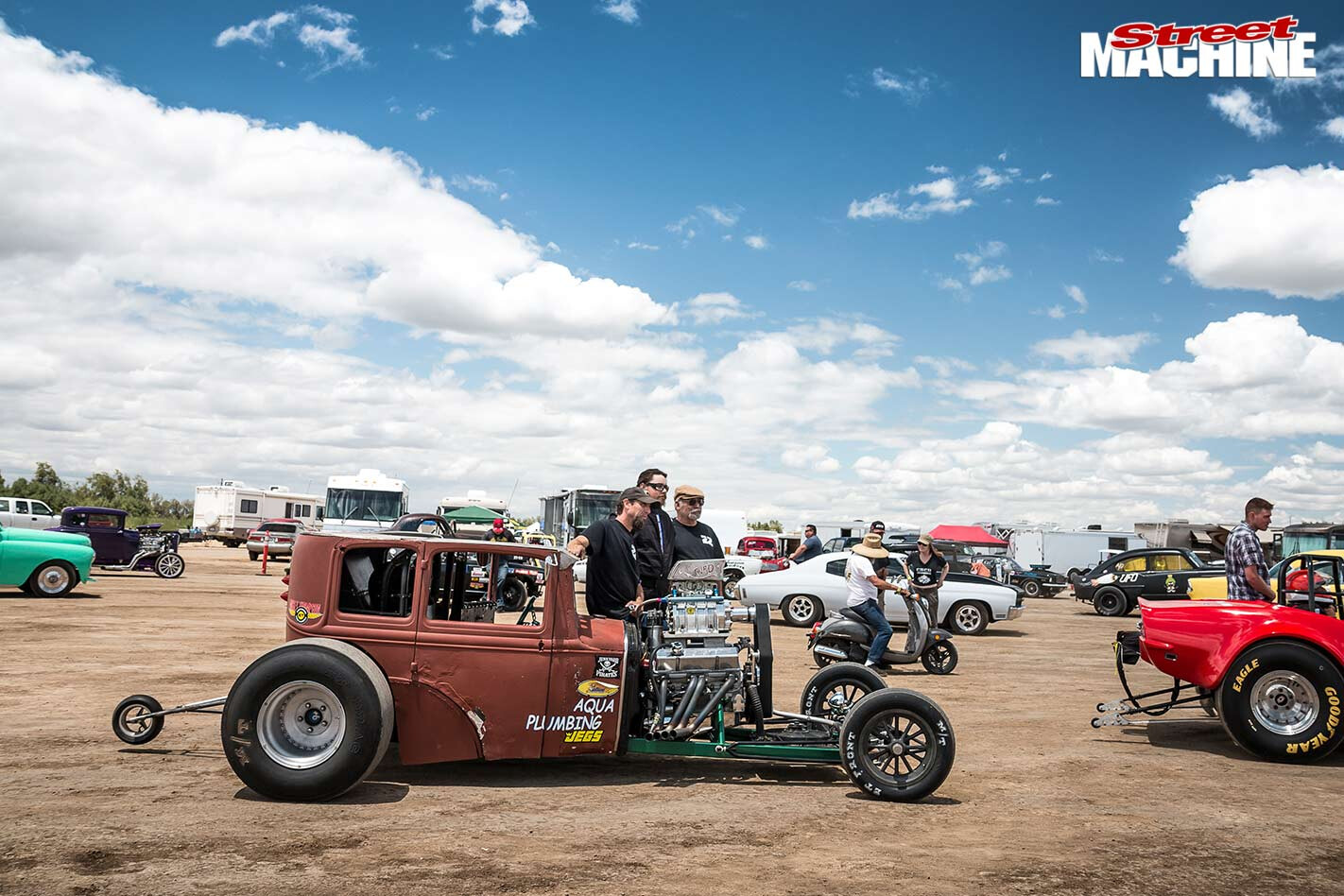 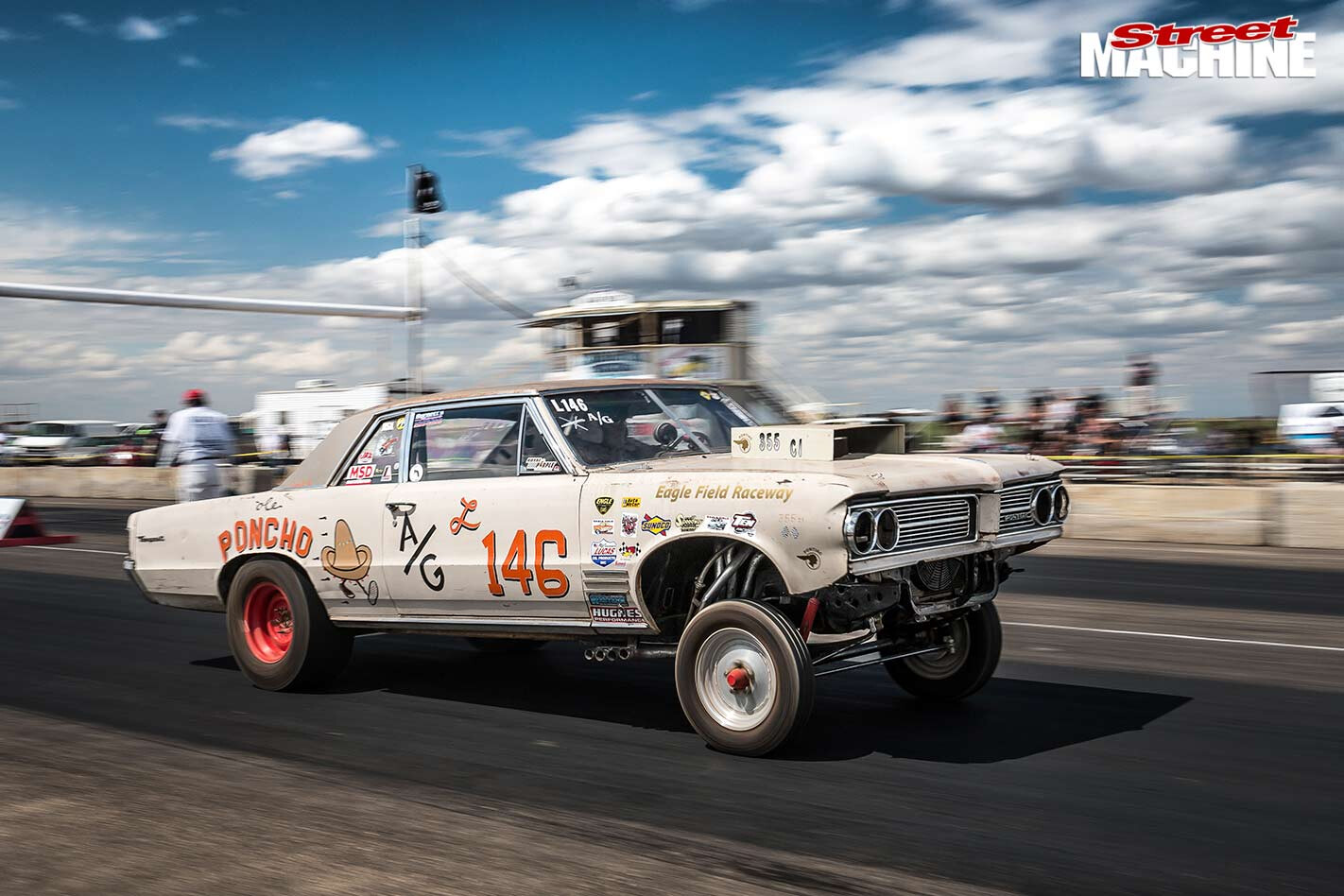 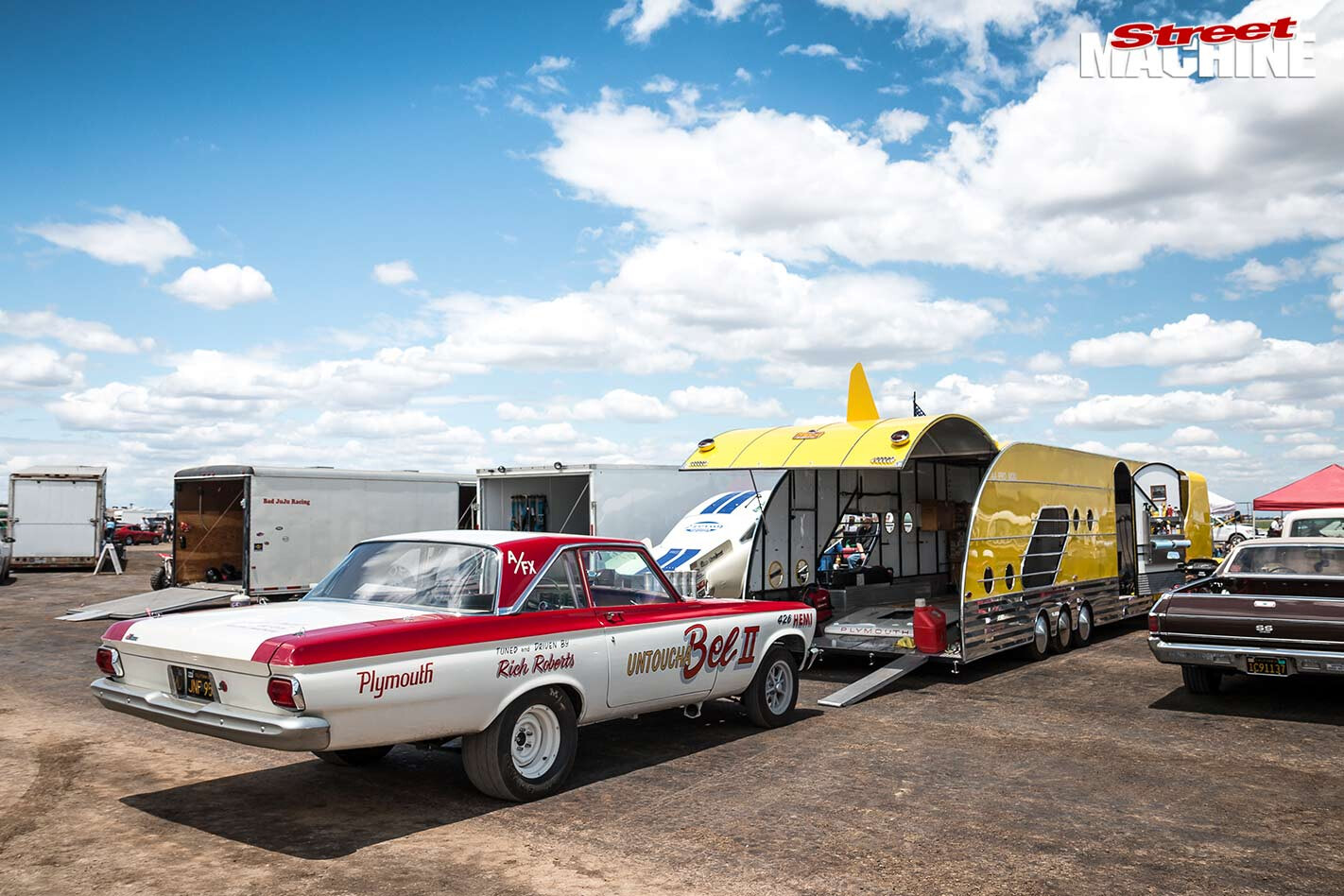 16. Rich Roberts of Atwater, CA rocked up in style! His Hemi-powered Plymouth, UntouchaBel II, rolled out of a crazy art deco-inspired GMC hauler 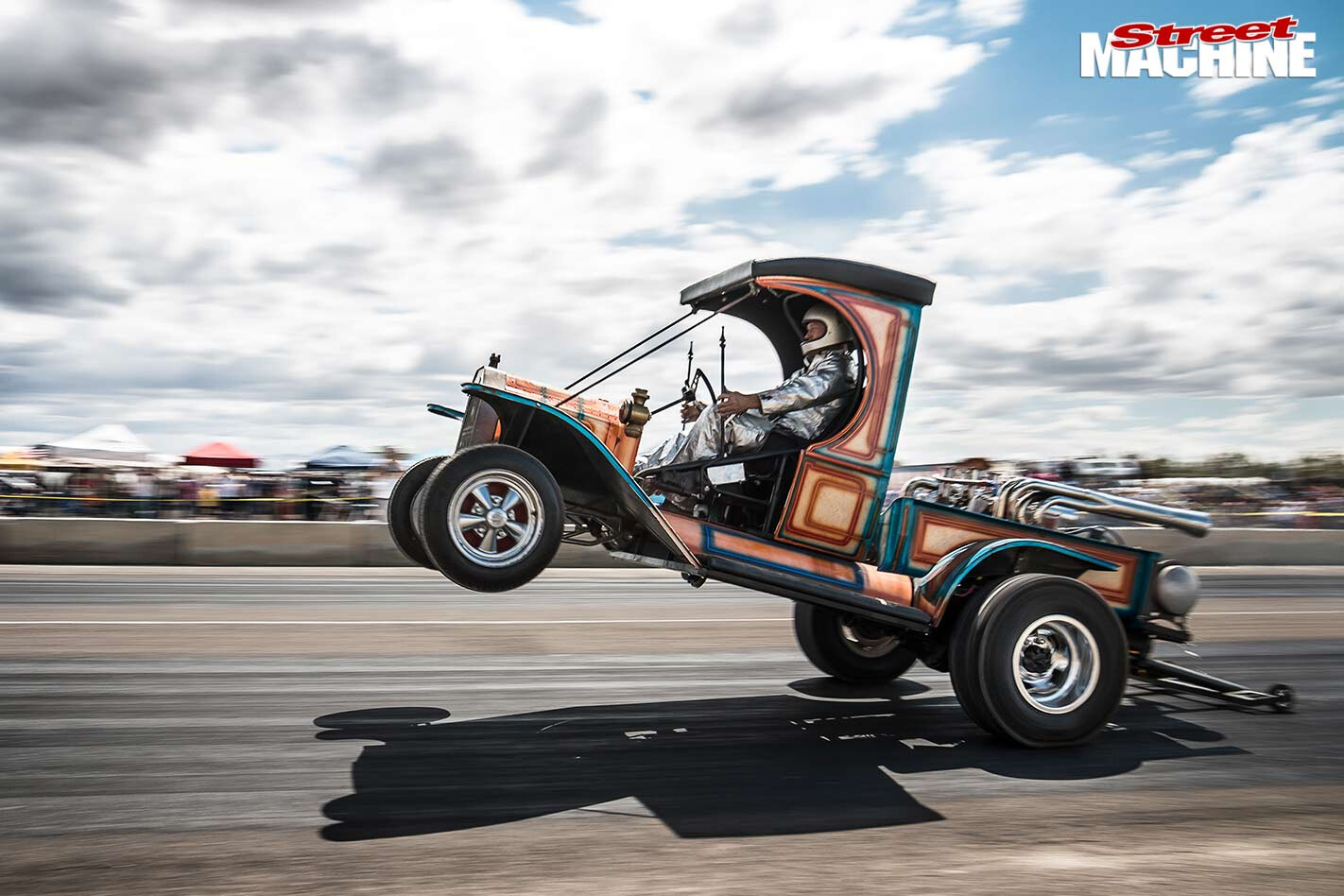 17. ‘General’ Jerry Lee’s original T-truck is one of the last surviving wheelstanders from the 1960s. Racing aficionados have been watching the General make two-wheeled passes for decades, but at Eagle Field, the Lil General was piloted by Jerry’s son, Hoss 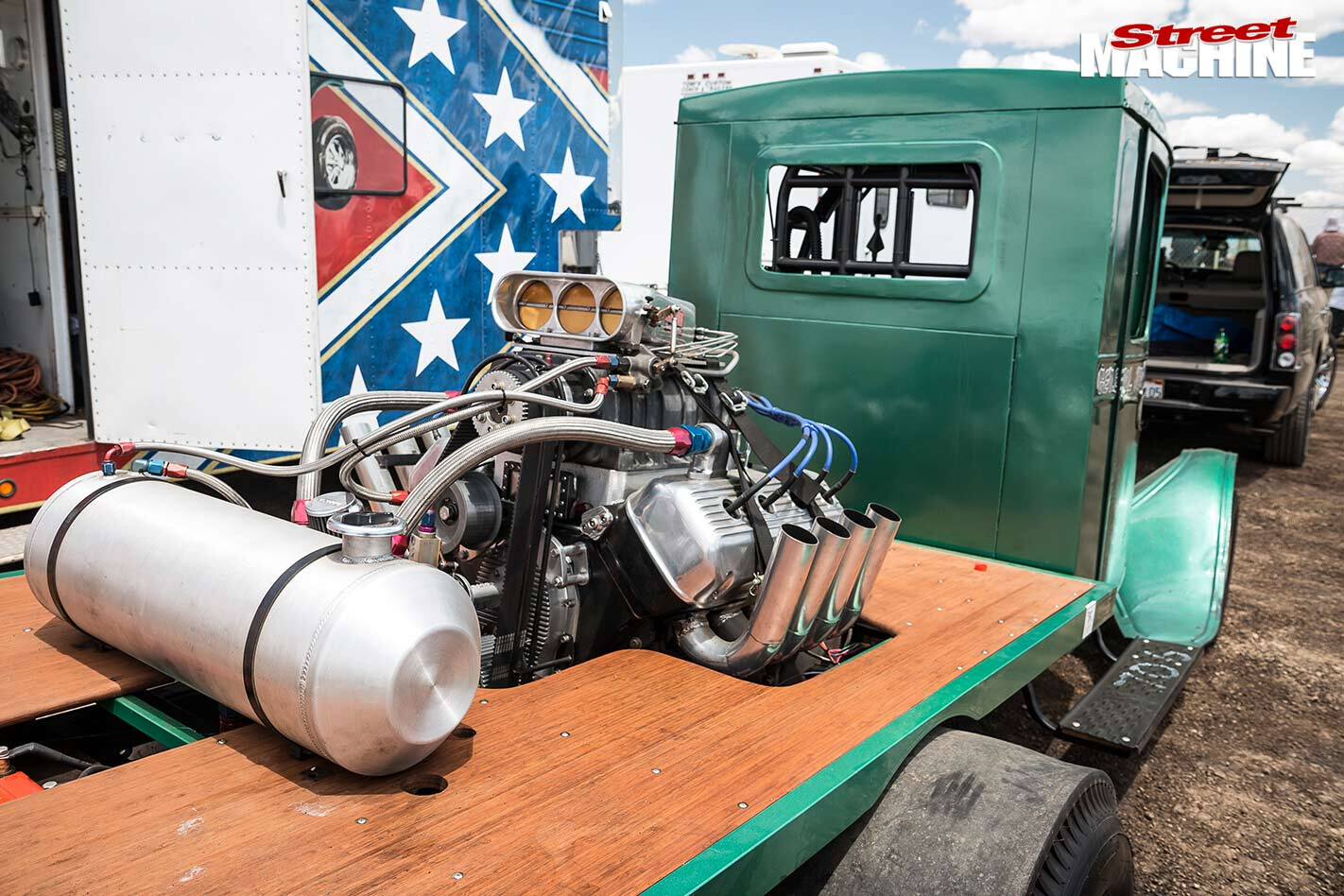 18. While Hoss drove his dad’s old wheelstander on the day, ‘General’ Jerry Lee sat in his other T-truck to wow the crowds with full-length wheelies down the strip. The 60-year-old 392ci donk gave out at the end of its run, unfortunately 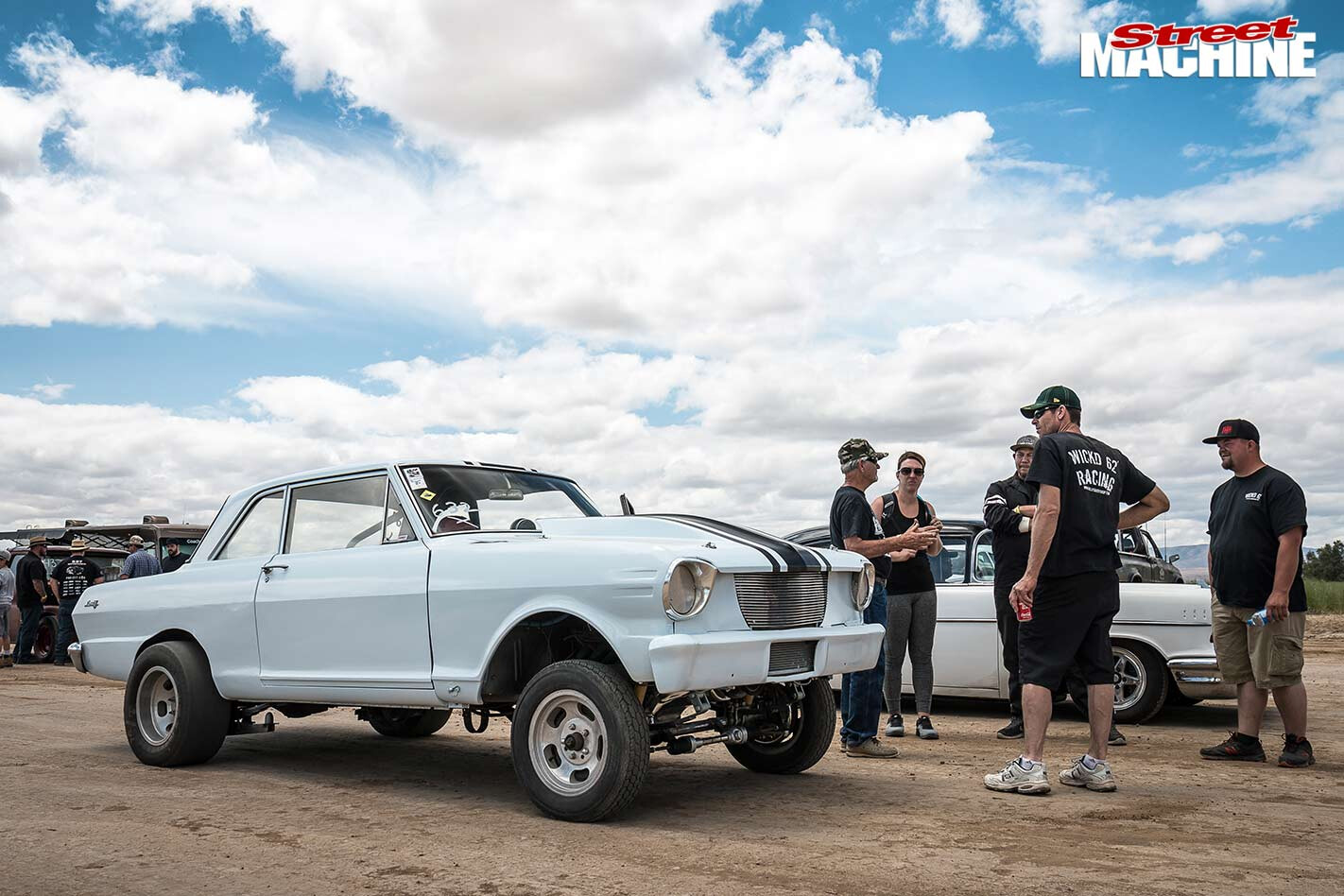 19. The Wickd 62 Racing crew came out to Eagle Field with their nose-high ’62 Chevy II Nova to make some passes. Even though they would have been eligible to participate, they didn’t stick around for the afternoon’s gasser wars 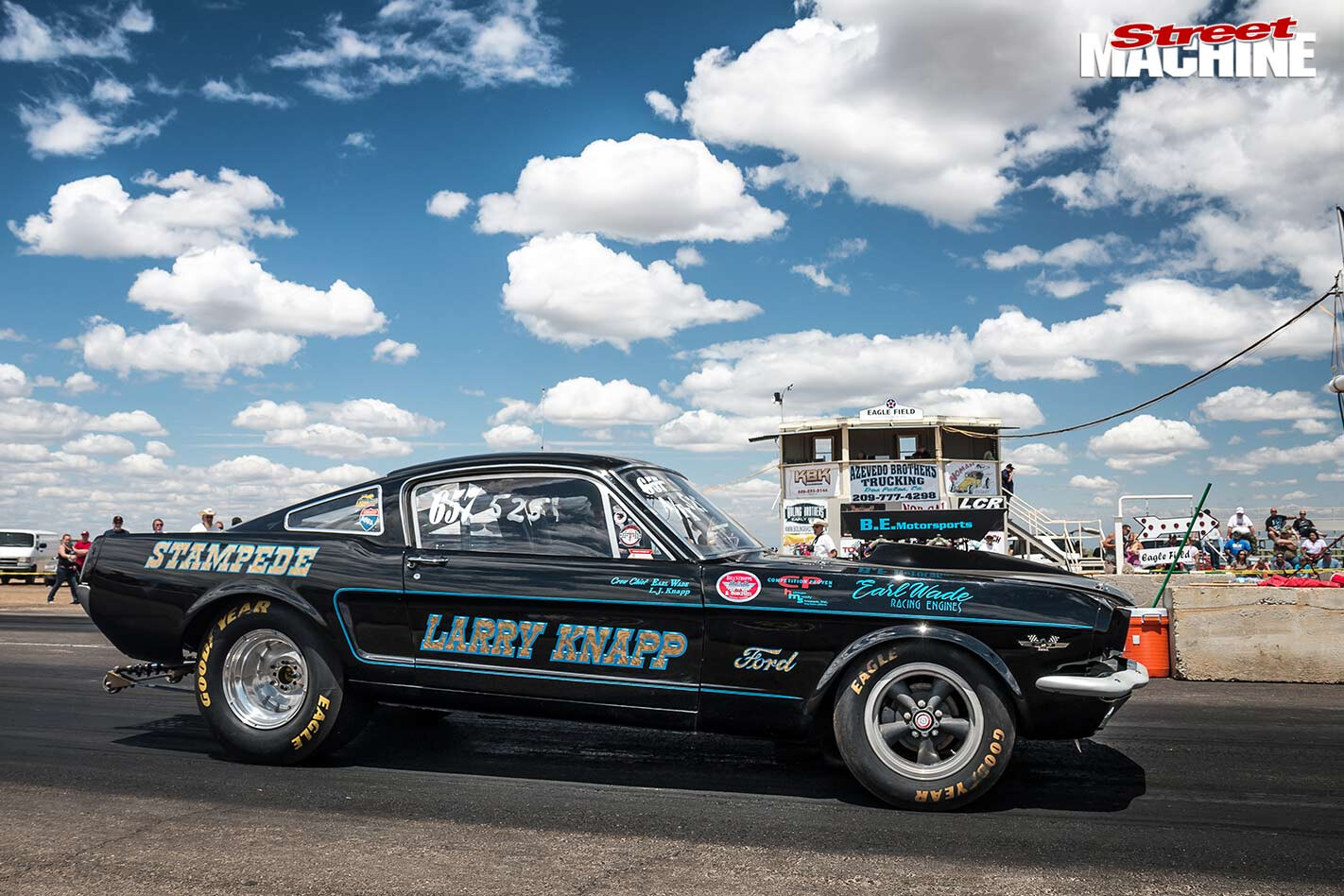 20. Larry Knapp was the original owner of this Mustang and raced it with its standard 289 for a few years before turning it over to Holman-Moody-Stroppe in 1969, who ’glassed out the body and fitted a Ford SOHC motor. It’s been a race car ever since, and Knapp has taken it to high eights with one of Ford’s finest ‘Cammer’ engines 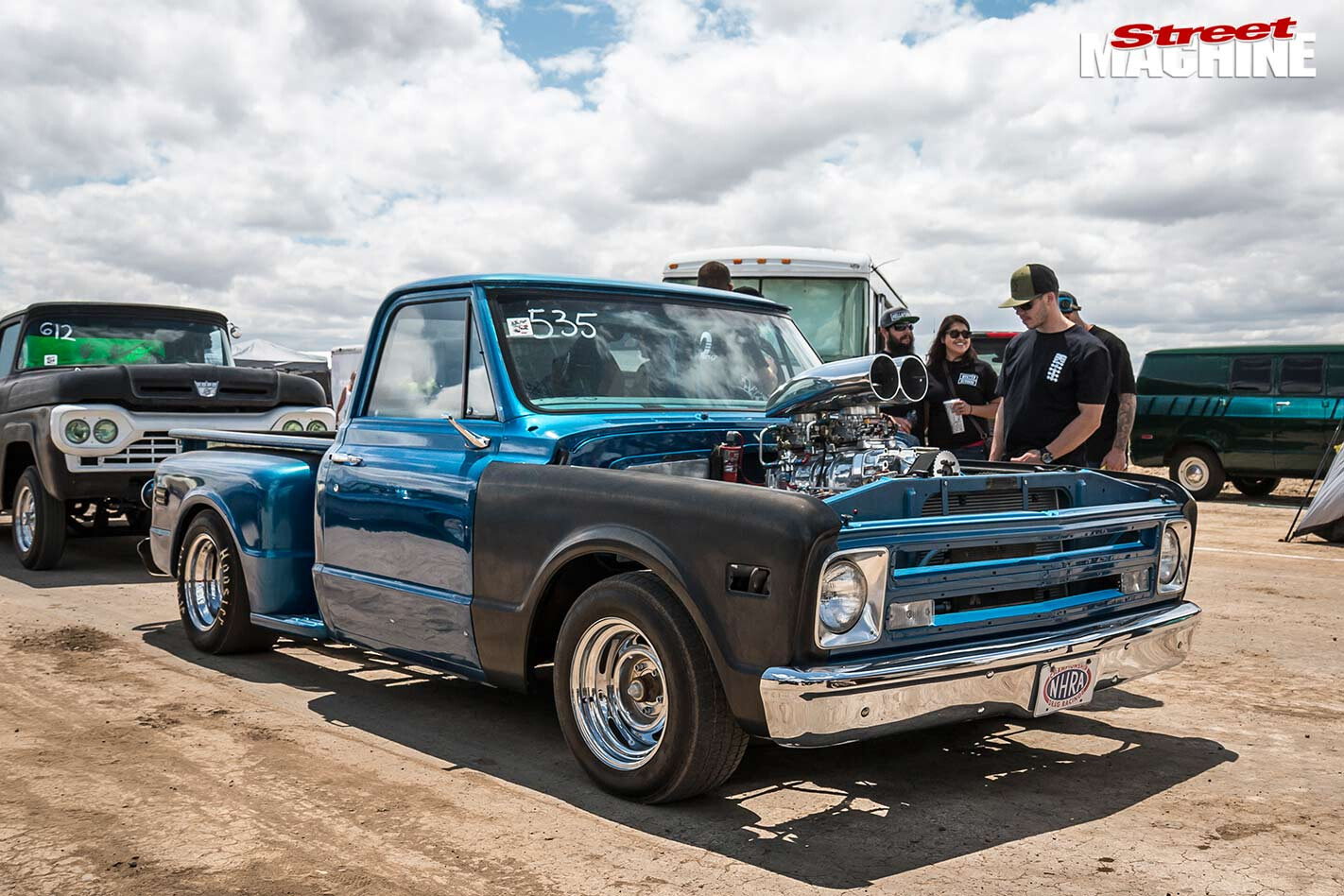 21. This old C10 stepside truck got a new lease on life when a Weiand-blown small-block Chev was dumped in the front. It’s fed by a shotgun scoop and a couple of two-barrel Edelbrock carbs. To keep the weight down it’s been stripped of anything unnecessary, including the bonnet and the inside of the tray 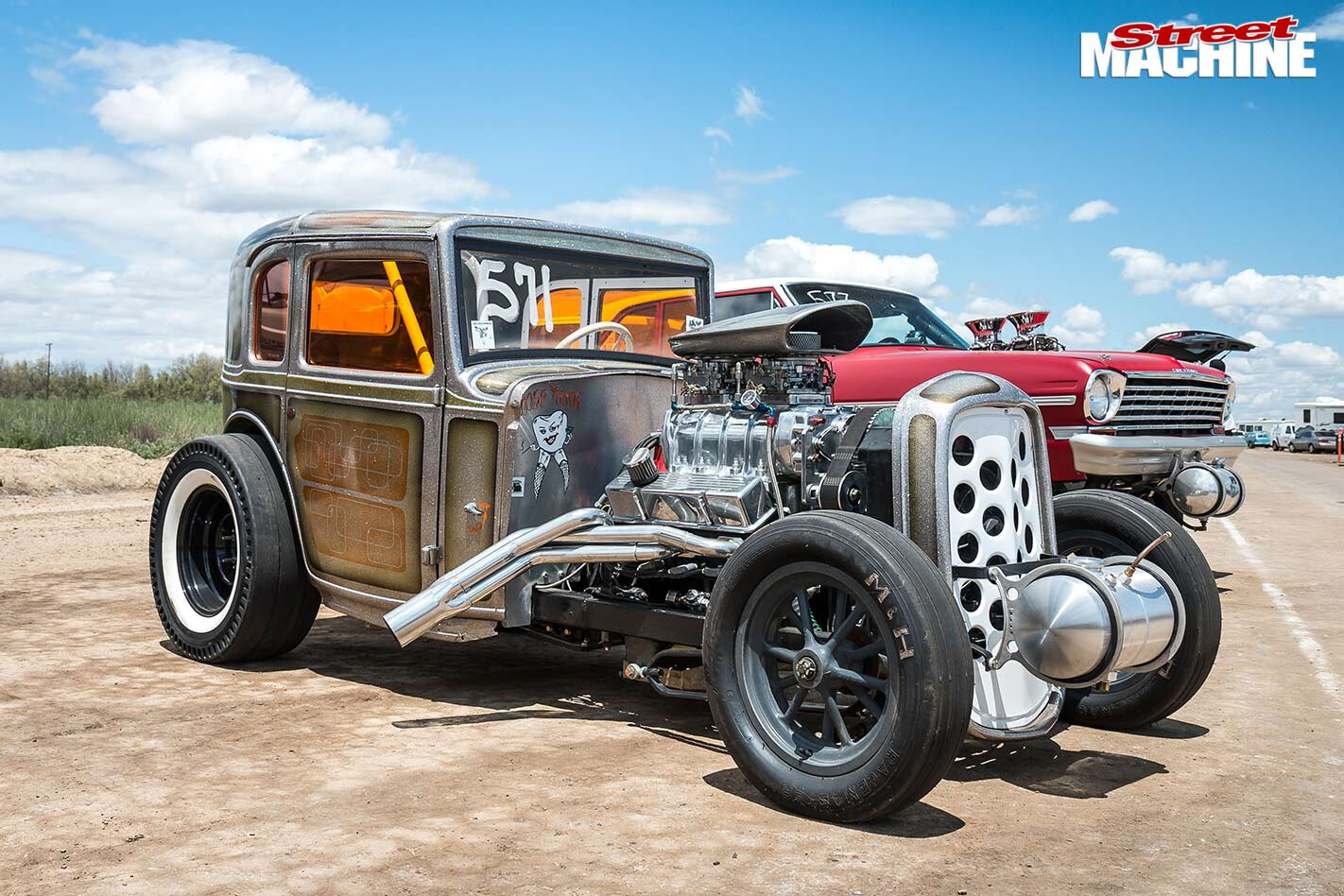 22. Hailing from Portland, Oregon, Estranged Car Club organised a session of gasser racing in the afternoon, after the day’s official events had finished. They had some great-looking copper-plated trophies waiting by member Nate’s radical modified drag car, The Loose Tooth. It’s powered by a blown small-block Chev and the body is made from a hacked-up Model A tudor 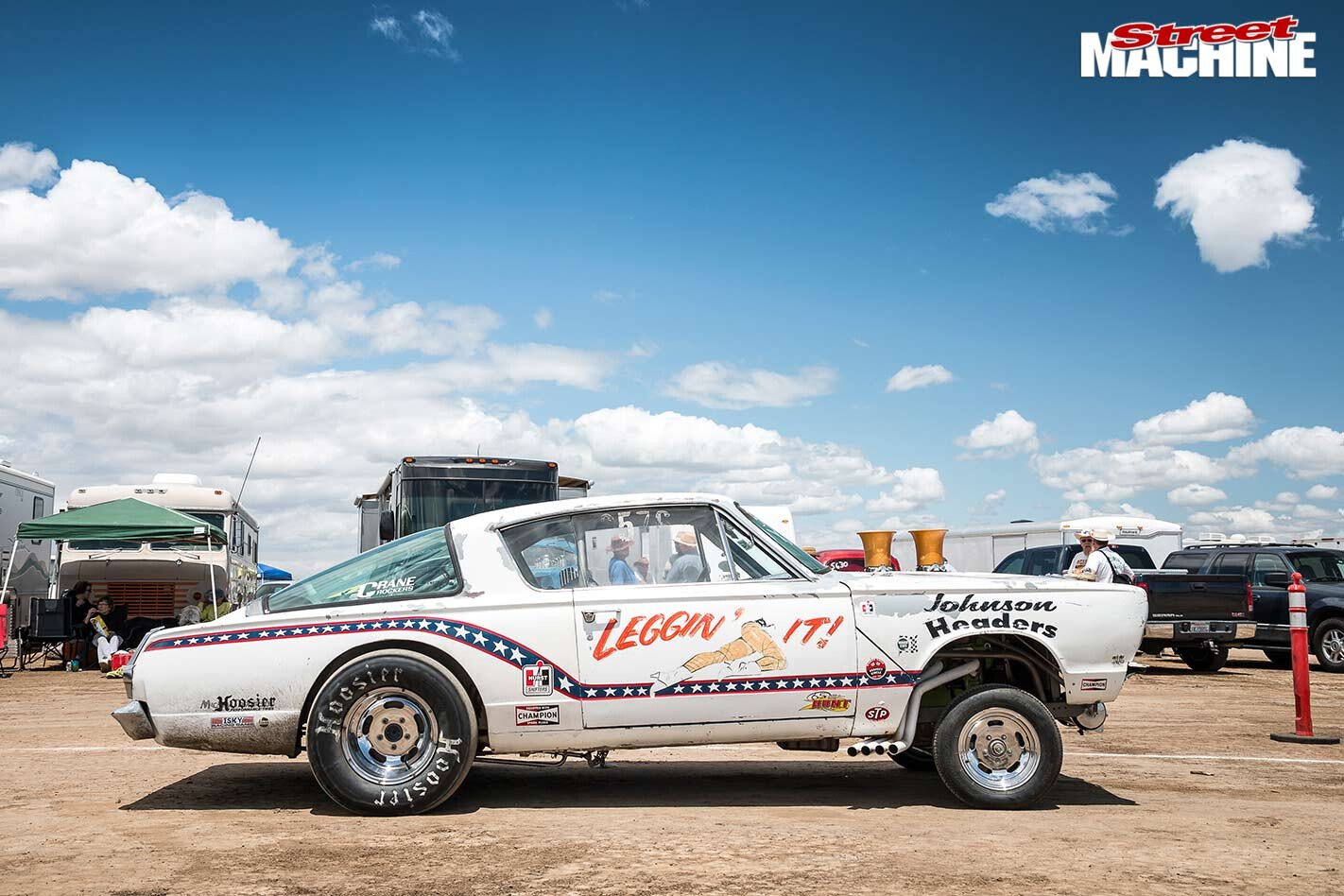 23. Joe Hickenbottom brought two cars to Eagle Field – a red Chevy II Nova that he raced in the afternoon, and this one. Leggin’ It is a ’65 Plymouth Barracuda gasser fitted with big-block Mopar power and adorned with period-style hand-painted signage 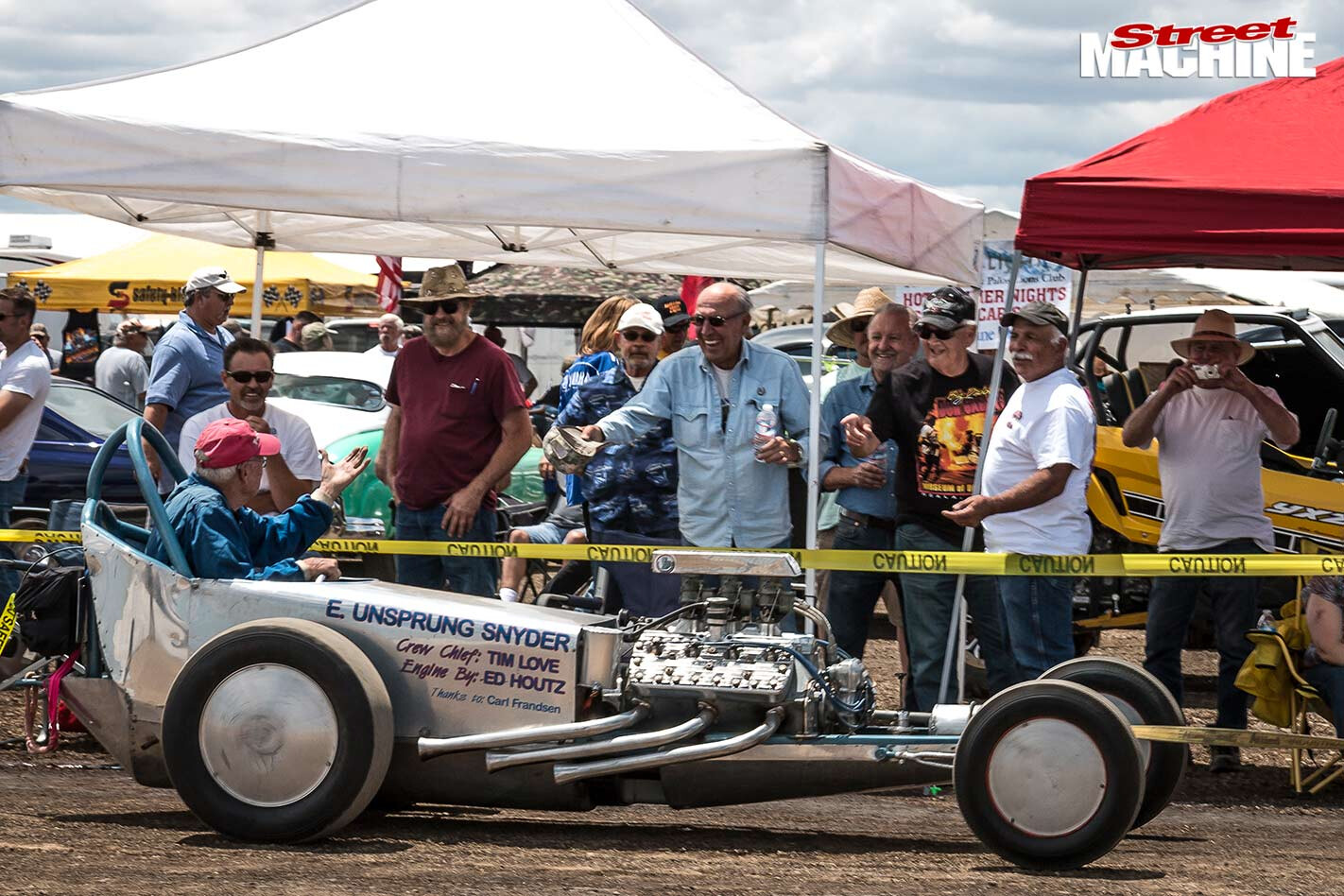 24. Elmer ‘Unsprung’ Snyder was celebrating his 90th birthday at the drags and was still out in his flathead-powered rail. He was a force to be reckoned with, and even his own son, racing a T-bucket and cheating with a false start, was no match for his old-school wisdom and speed