THE first weekend of March saw Round One of the Kenda Tires Radial 660 Series get underway at Willowbank Raceway’s eighth-mile strip, with plenty of big bangers from both Queensland and interstate pushing some seriously quick numbers in hot competition.

The weekend’s racing started off with some really hot pace on Friday, before the Chicago Shootout-style racing got underway for all classes on Saturday.

Kyle Hopf of 6boost fame is a regular crew member on Terry Seng’s Drag Challenge adventures, and Terry was stoked when Kyle offered him a drive of his stunning Pro Mod Camaro. The guys pushed out a PB for the car with a 4.08@188mph. As Terry put it: “I enjoyed every hundredth of a second behind the wheel of one of the baddest cars I’ve ever had the privilege of steering.”

The boys from Castle Hill Performance in NSW made the trip up to Willowbank with two cars: their mental Holden Commodore and Mazda RX-3. This was the first outing for the RX-3 – which used to be the quickest LS-powered car in the country – since it’s been running a 622ci big-block Chevy and pair of 98mm turbos. It came out swinging with some serious speed, with driver Nathan Farrugia clocking a best of 4.46.

Dale Heiler’s Commodore recently won the Turbo versus Blower Dyno Shootout at Street Machine Summernats 32, making over 3000hp to beat the ACDelco Monaro Pro Slammer. The twin-turbo BBC-powered car ran a string of four-second passes at Willowbank to come home with a best of 4.27@178mph. 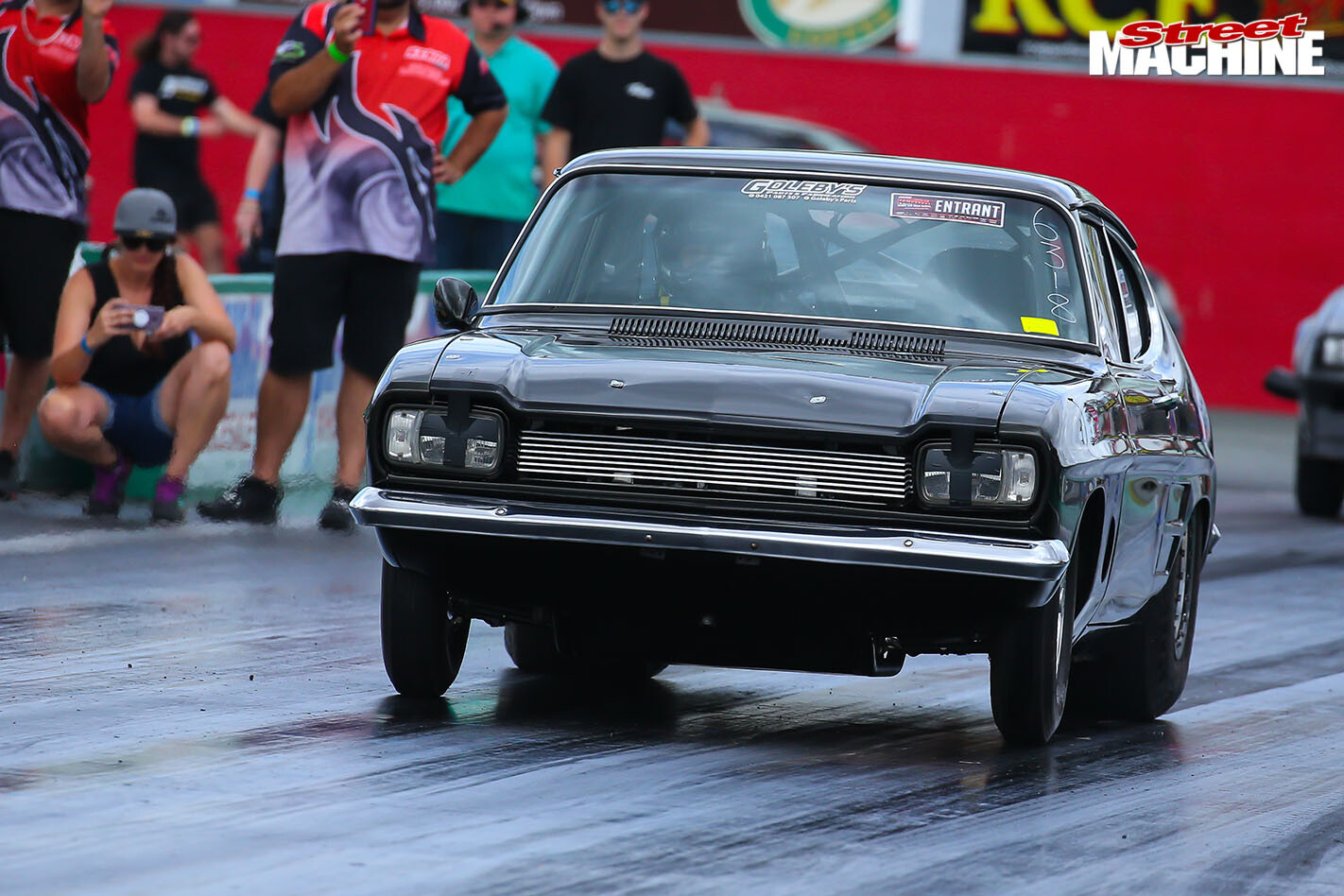 Kristian Goleby’s 1JZ Capri proved again that it has the juice to play with the big boys, with a best of 4.91 @143mph until the rain put a halt to play.

Brett Armstrong’s HK Monaro recently took out the top gong on the dyno at Street Machine Summernats 32 in the Eight-Cylinder Aspirated class, and at Willowbank he proved the car certainly isn’t a dyno queen. Running in full street trim, he consistently punched out five-second passes, the 900hp, 615ci Sunset big-block Chev yielding him a best of 5.53sec. Simon O’Carroll wowed the crowd with a mega wheelstand during Friday night testing, his Torana running a best of 4.51@160mph.

One of the biggest highlights of the event was Matthew Grubisa and his Pontiac, running a pair of 199mph passes and edging ever-so-close to that magic 200mph eighth-mile pass, with a best of 4.06@199.84mph!

Kenda Series organiser Scott Harker says that despite racing getting cut prematurely short due to rain, most classes were still awarded series points and overall the event was a huge success. “One of the best things about this event is how much the racers get around each other,” he said. “I call it more gentlemen’s racing, having guys from the big bangers helping each other out all the time with advice and in the staging lanes, rather than trying to psyche each other out. It’s a really good vibe at the event.”

Round Two heads to Benaraby Raceway on 27 April, with testing commencing the day before on the Friday night.