THE street is the great equaliser. On a sticky, wellprepped quarter-mile drag strip, chances are the car with the most horsepower and dollars under the bonnet will win a heads-up race, but on an eighthmile track with a surface that approximates street conditions, it really is anyone’s game. Tunnel Vision’s King Of The Street event is all about taking the street racing philosophy to a safe, controlled environment. The event is held on the Ballarat Airport runway over an eighth-mile distance, and is open to radialtyre street cars only. While the track is prepped up to the 60-foot mark, it is a long way from racing on a dedicated drag strip with full prep.

MORE King of the Street #4 highlights 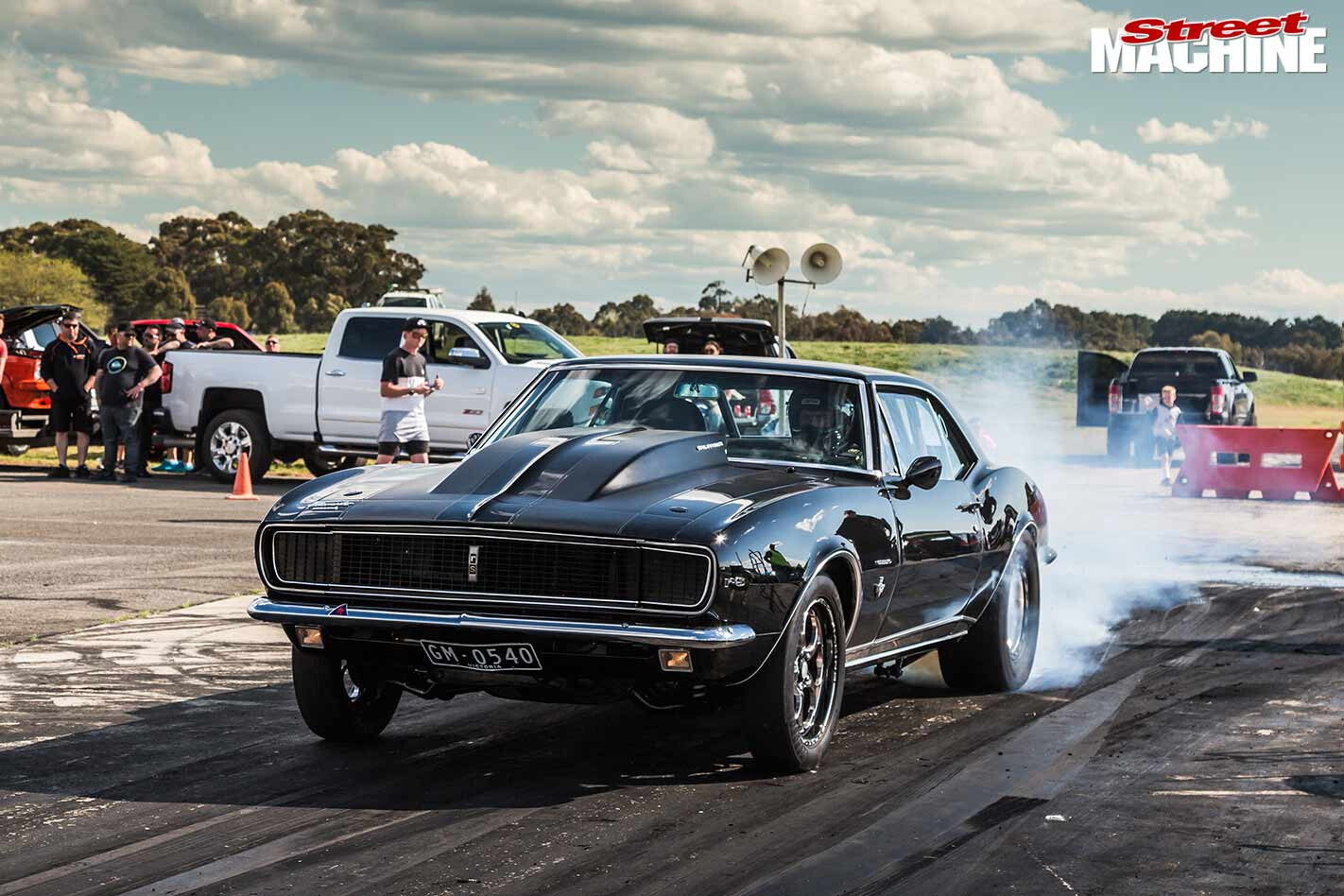 Organised by Jason Ghiller from Melbourne’s Tunnel Vision Turbocharging and good mate John Colaidis, along with Zoran Makarovski from Competition Engines, King Of The Street attracts everything from seven-second streeters to quick weekend cruisers. With the track being a real challenge to the quickest cars, just about everyone at this year’s event was in with a chance of taking home some cash. Especially since there were two classes this time around – one for cars running 10 seconds or slower and another for cars running quicker than 10s. With a fair wad of cash up for grabs, pairs were drawn from a hat so there would be no funny business or sandbagging.

Last year’s winner Jason Ruby made the last-minute decision to not bring his RB-powered all-wheel-drive Silvia out to play. For 2017’s event he had a manual gearbox, but he has since converted to a Powerglide auto and the car would definitely have been a strong contender. Jason won the final last year against Brendan Cherry and his twin-turbo bigblock Monaro, but Brendan has since swapped that car’s running gear into a more race-focussed VL Commodore street car with good mate Josh Ploeger. King Of The Street was the car’s first time on track, but Brendan was on wedding duties so Tim Holmyard was behind the wheel. It’s an angry car, but struggled to put down power on the low-grip surface. 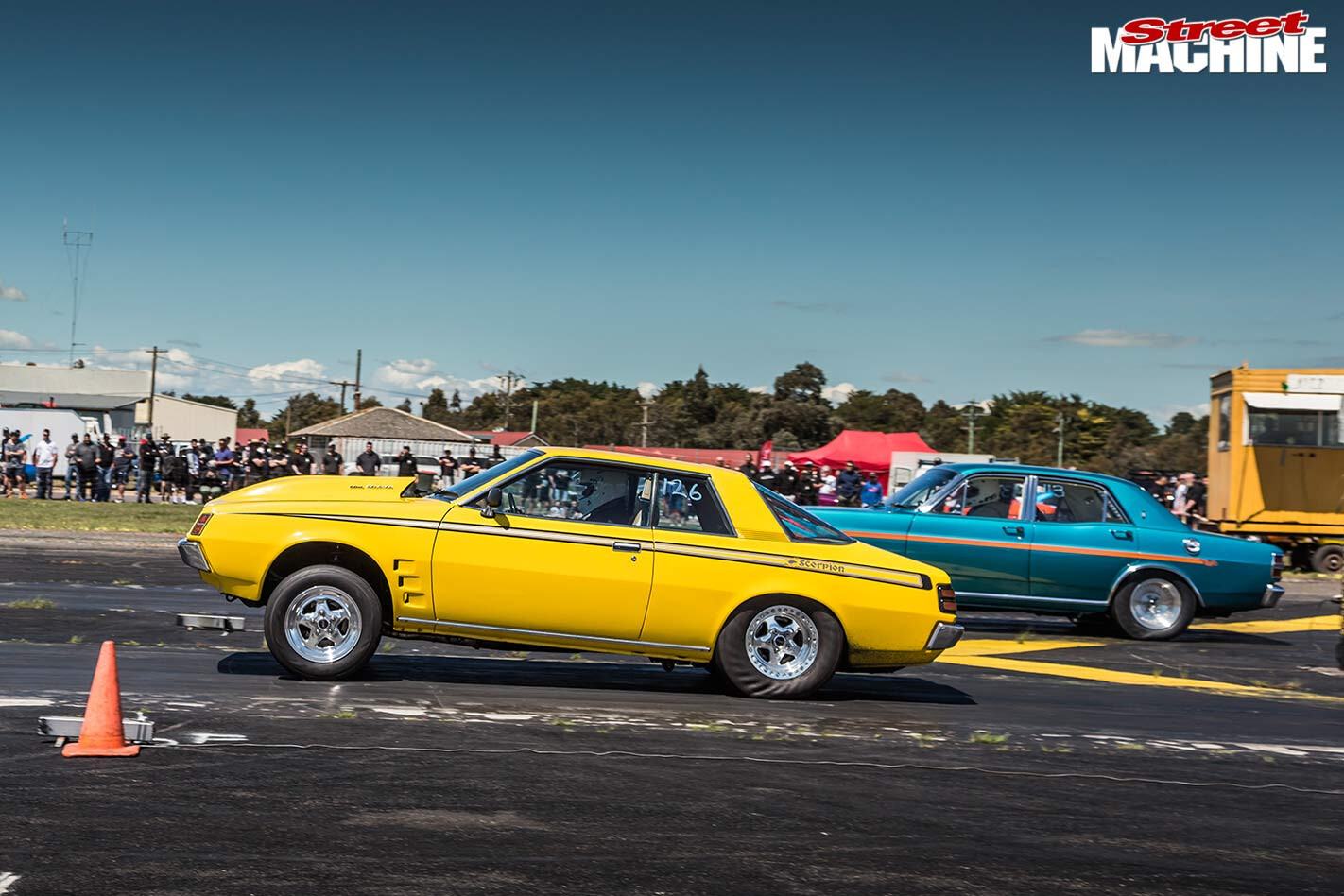 Out of the 35-odd cars entered, there were two Mitsubishi Sigma Scorpions, which has to be some kind of record. Robbie Adamo raced his yellow, nitrousassisted, small-block Ford-powered Scorp, which was probably one of the quickest cars point-to-point as it rarely broke traction. He only lost to Paul Paterson’s Camaro – one of the favourites to win the event.

The other Scorp was Vince Riccotti and Jason Ghiller’s sleeper. Powered by a built Nissan VG30 V6 with a single Garrett turbo, it would probably go a low 10 or high nine down the quarter, but neither Vince nor Jason had ever raced it at a drag strip. Unfortunately the car doesn’t have a bump box, so it wasn’t really competitive in the heads-up racing this year. Still, Vince and Robbie had an all-Scorp grudge race late in the day and it was bloody close – I don’t think anyone could pick the winner. While Vince drove the Scorpion, Jason raced his own Barra-powered XD Falcon. After discovering he did all of Drag Challenge 2017 with a split bore, Jason has upped the ante in the lead-up to this year’s event with a fresh block and upgraded camshafts – yep, Jason’s previous loweight-second Barra combo had factory cams. The car was really competitive on the Ballarat surface too, only losing to Michael Vargas’s monster nitrous Impala in the semifinal. Just as the mighty Barra came on boost in the top end it started blazing the rear tyres, and the Impala drove straight past. 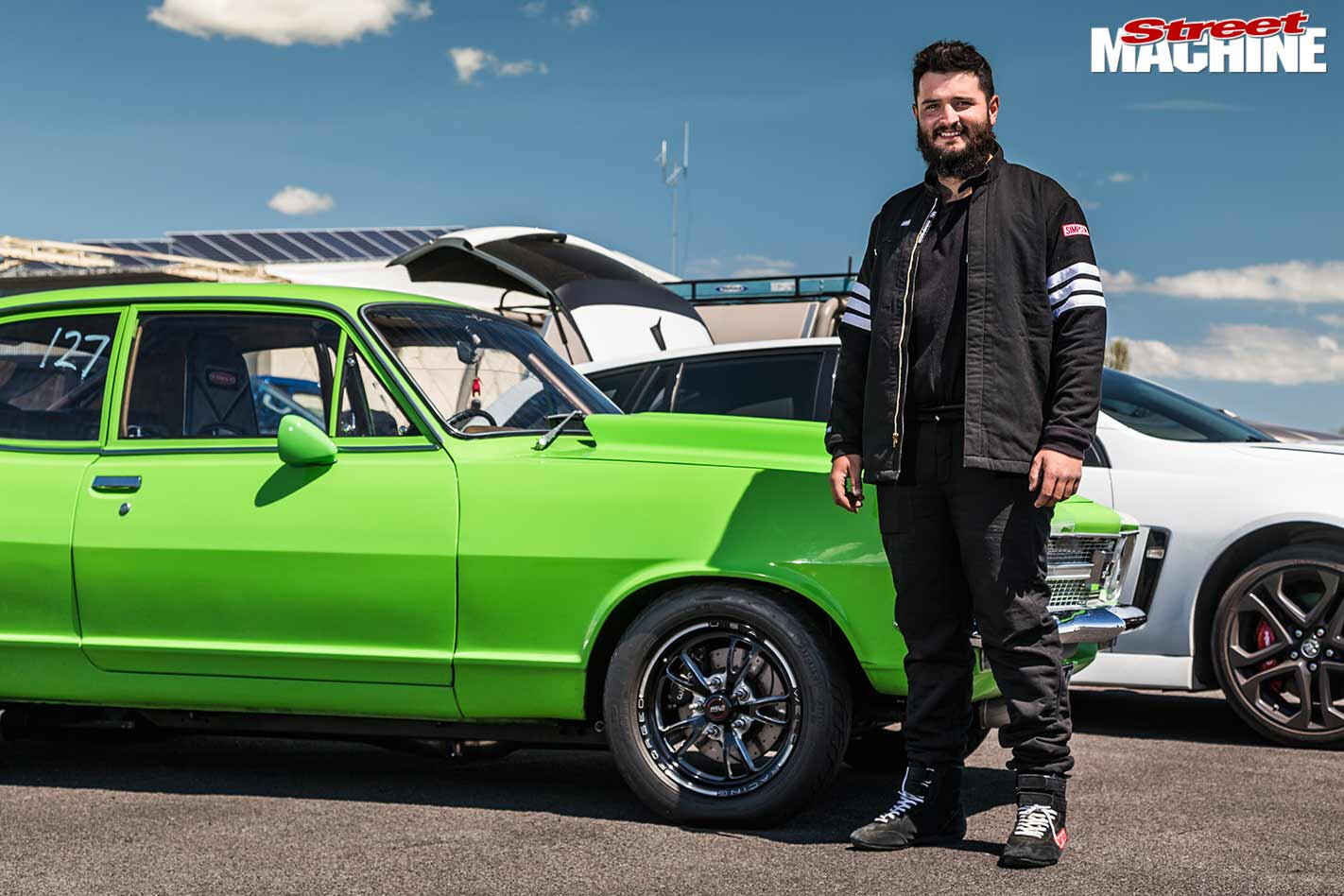 We were also mighty impressed by how well Brandon Zito’s twin-turbo LC Torana handled the slippery track. Having previously run 7.90 on a fully-prepped quarter-mile with a 364ci small-block Chev on board, at King Of The Street the LC’s round-one race with Michael Vargas’s Impala was so close it had to be re-run. In the second race Brandon battled wheelspin all the way down the track and the Impala took a convincing victory. 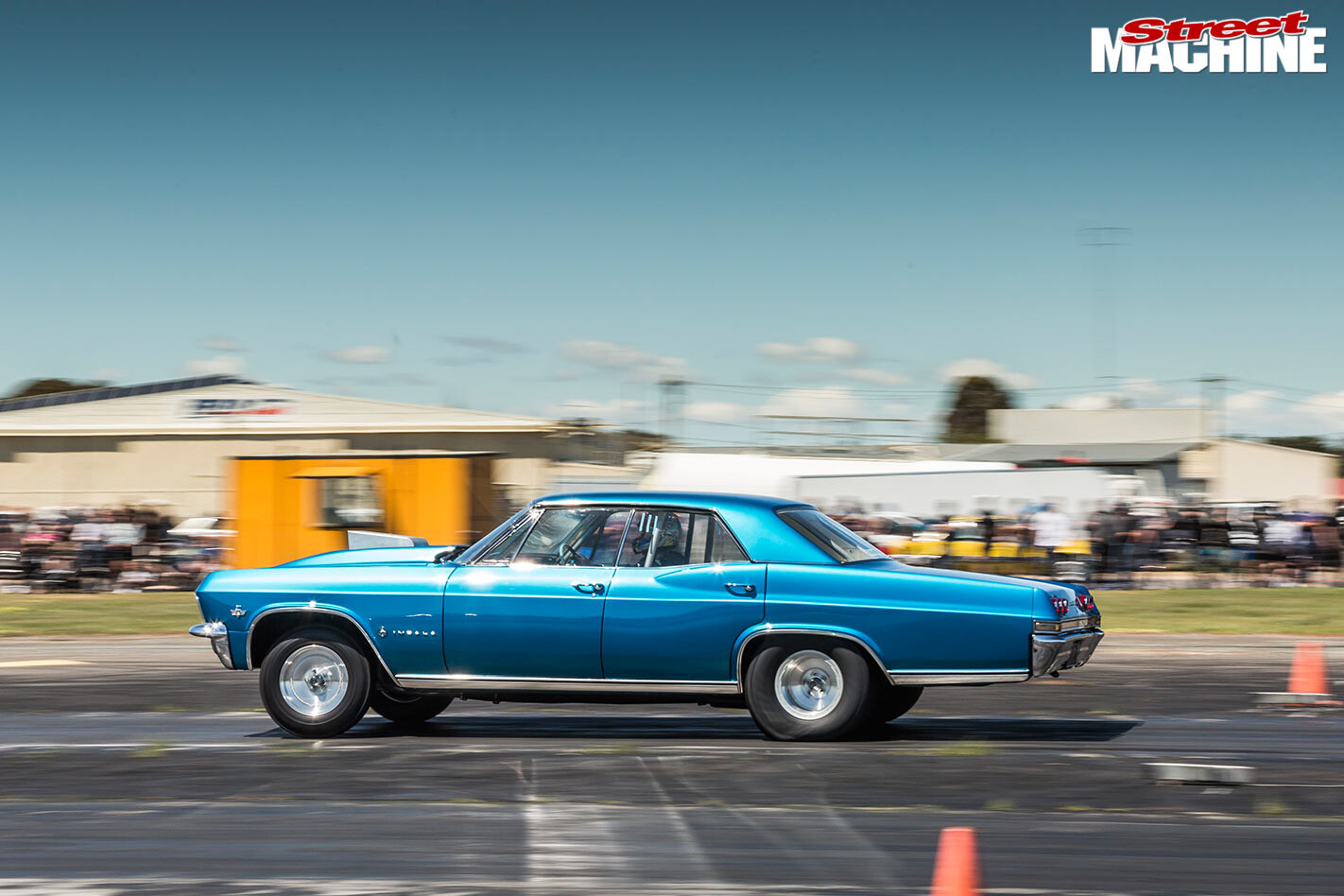 The final race for the cash came down to Michael Vargas in the heavyweight Impala and Matt Brame in his tough-as-nails nitrous small-block Chev-powered LH Torana.

Matt had a rough start to the day: “When I took off, the car stood up on the back tyres,” he said. “I pedalled it and with the nitrous still on when I got back on the throttle, it backfired and bent the throttle plates. Simon and Vinnie from SJH Race Engines pulled the carby off and ran it back to Ballarat. They beat the plates back into shape and got it back to me
in time for my first finals race.” Phew!

Sure enough, the Torana lined up next to the Impala and Matt’s LH ran flawlessly, taking the win by a couple of car lengths. It just goes to show, anything can happen at King Of The Street. 1. Corey Jackson had a big scare in his twin-turbo Cortina, which wasn’t competing but using the day as a test ’n’ tune. Not used to an unprepped track, Corey had all the power pulled out of the thing, but even at quarter-throttle it spun 360 degrees off the track when it came on boost. Thankfully he was able to drive out of it. 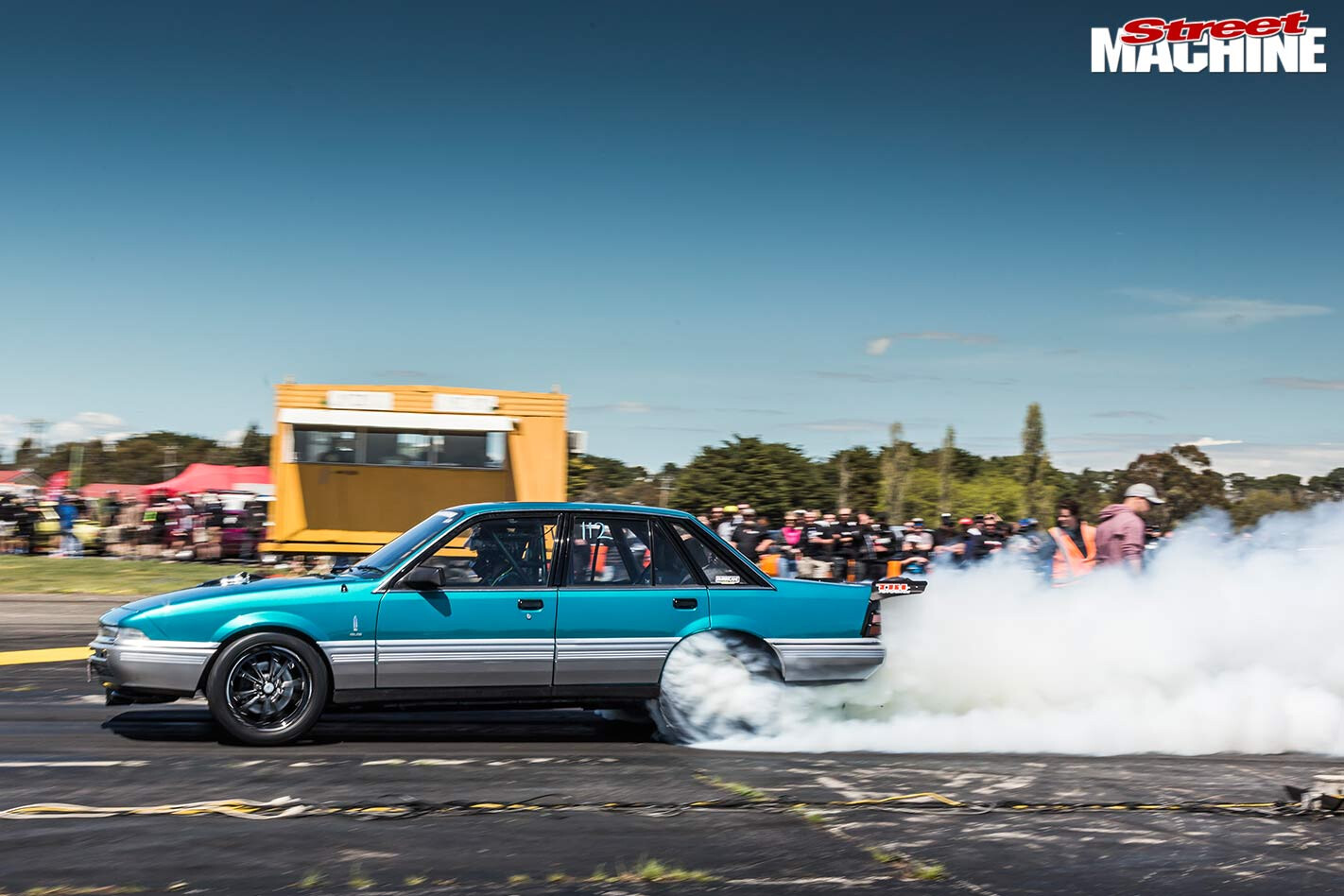 2. Last year’s KOTS runner-up Brendan Cherry has teamed up with mate Josh Ploeger to slot the twin-turbo big-block Chev from Cherry’s Monaro into a VL for Drag Challenge 2018. KOTS was the first hit-out for the combo, with Tim Holmyard behind the wheel. 3. John Ricca’s RB-powered VL Commodore street car has run into the sevens at the drag strip and was ultra-competitive at Ballarat Airport. He lost out to Michael Vargas’s Impala after the light went green before he had a chance to hit the two-step on the transbrake. 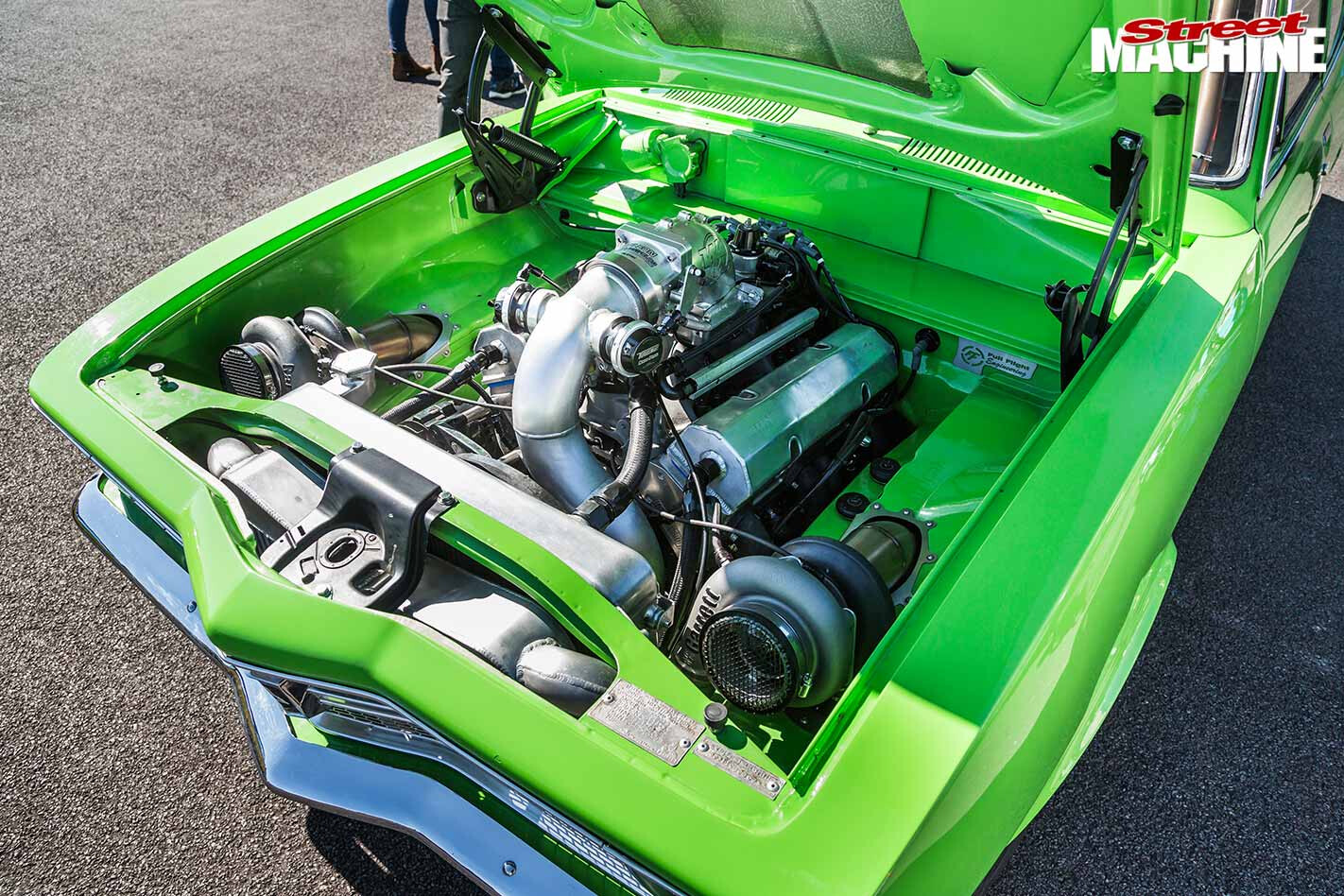 4. Brandon Zito’s twin-turbo LC Torana did well on the slippery track, with his round-one race against Michael Vargas’s Impala so close it had to be run again. Unfortunately the rematch saw Brandon battling wheelspin, handing the win to the Impala. 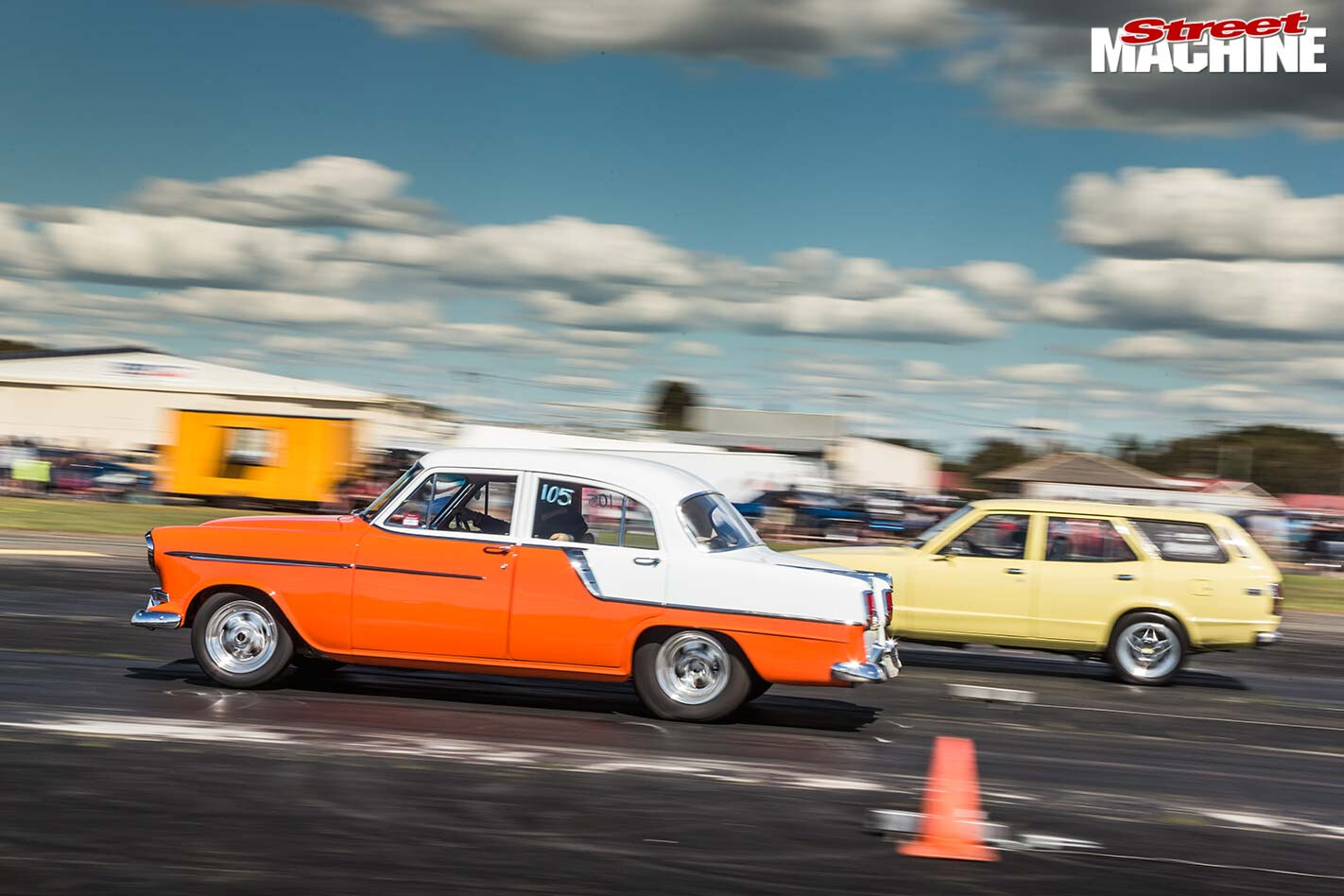 5. David Graham’s stunning FC Holden is a quick little thing! He took home the overall win in the 10-and-over class final against Jimmy Lingos in his genuine XB Falcon GT. Since we featured the FC (SM, Oct ’14), Competition Engines has slotted in a 440ci small-block Chev and swapped out the carb for a Holley Super Sniper EFI system.