The weekend began with test-and-tune sessions on both Friday and Saturday morning, before a Saturday afternoon of action-packed competition for cash prizes and all-important bragging rights. Though a variety of Australian and foreign power was on display, Holdens dominated the final standings.

Brendan Cherry got his 700hp HK Monaro back on the road after a four-year hibernation, taking the 255 Radial gong on Saturday evening against Matt Hohenhaus’s 1JZ-powered XM Falcon. Brendan drove the coupe all the way back to Melbourne after the event.

275 Radial was claimed by Alex Blias in his 535-cube big block-powered HQ GTS.

Mark Drew took runner-up in 275 Radial in his ‘Crusty’ Torana after a suspected fluid leak saw him sidelined by track officials. Mark recorded the quickest pass of the day, laying down a 7.72-second quarter-mile.

Wayne Cartledge took out DYO, and then drove his HK Premier home in the rain like the true street car it is.

Mick Manariti last took his Aussie-delivered Galaxie 500 down the strip a decade ago, just before it featured in our March 2011 issue. Family commitments kept him away from racing since then, but he returned for a run in the DYO class at KOTS. With a tunnel-rammed 572ci big-block and shot of gas, Mick was aiming to smash his last ET of 11.3. 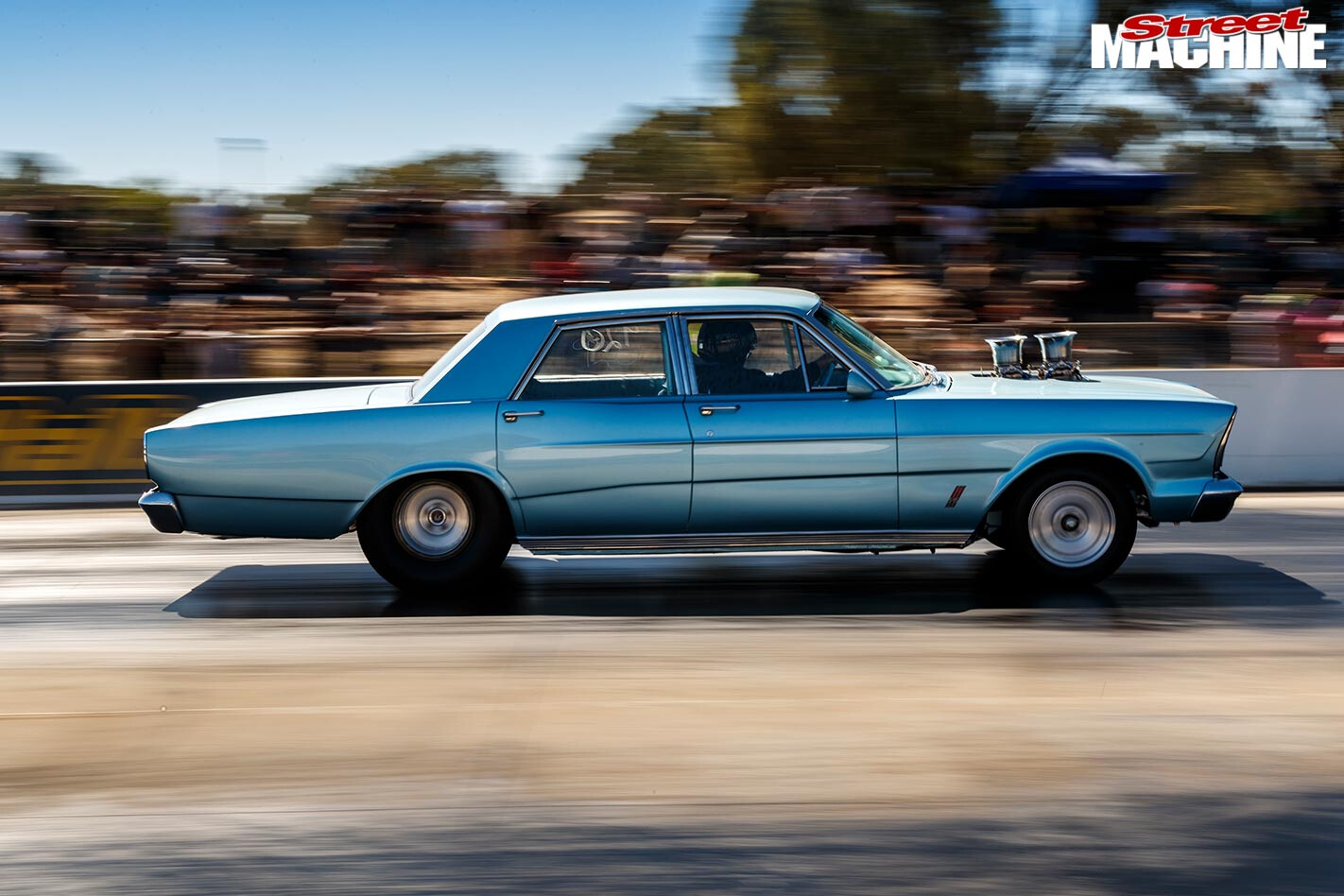 Kon Tsiokos debuted his stunning ’63 Nova over the weekend. Power comes from a ProCharged 400ci small-block, backed by a Turbo 400, tubs and a four-linked, nine-inch rear end.

Kon fabricated the intake pipe himself, proudly leaving it unfinished. “There’s 30 hours in that, and lots of gas!” he laughed. The car was imported from the US by famed basketballer Andrew Bogut, with all fab work by Kon. With boost turned down and little timing, the Nova laid down 900hp.

Pat Primerano’s real-deal EA Brock Falcon is likely the quickest in Australia. The rare sedan packs a 3.8-litre single-cam donk with billet internals, plus a GT45 turbo. Pat’s owned the car for 25 years, and these days it’s good for 930hp. A Reid-case Powerglide from Preston Autos handles shifting duties, while 380mm AP Racing stoppers up front rein in the power.

Adam Zovko’s lockdown-built TA23 Celica features an all-Toyota driveline. A GTX3076R-boosted 1JZ feeds a R154 manual ’box, while a HiLux diff spins the rears. The combo is good for 400rwhp, which Adam said should yield him a 10-second pass.

Another SM feature car, Ali Elseidy’s FD LTD is pure sleeper. Once the pinnacle of luxury Aussie motoring, the car now hides an AU Intech six, destroked to 3.8 litres and force-fed by a Garrett GTX42 snail. “I did 15 passes back-to-back on Friday, and didn’t open the bonnet,” Ali enthused. Racing in the 275 Radial class, Ali’s PB is 9.50@141mph.

Luke Hamilton bought his tidy two-door LC Torana as an unfinished project, with the RB30 partially installed. The donk is a JPC-built unit, with a 42mm Garrett turbo hanging off the side. A transbraked Powerglide with a 4500rpm stall gets the hatch off the line. “Smashing the limiter in first”, Luke recorded a 9.70 quarter-mile for the car’s first-ever pass. It’s a gallant effort for somebody who hasn’t raced in 10 years.

Morgan Smith piloted this freshly built ’72 Nova to a 9.50 on its maiden meet. It’s powered by a 560ci big-block Chev, topped with an F-3 ProCharger running 18psi of boost. The E85-sucking unit was built by Frankston Engine Centre, and is backed by a ’Glide and Dana diff. “I got off at half-track when I ran the 9.50, so we’re hoping for much faster!” Morgan said. The car is a sure bet to do just that before long. 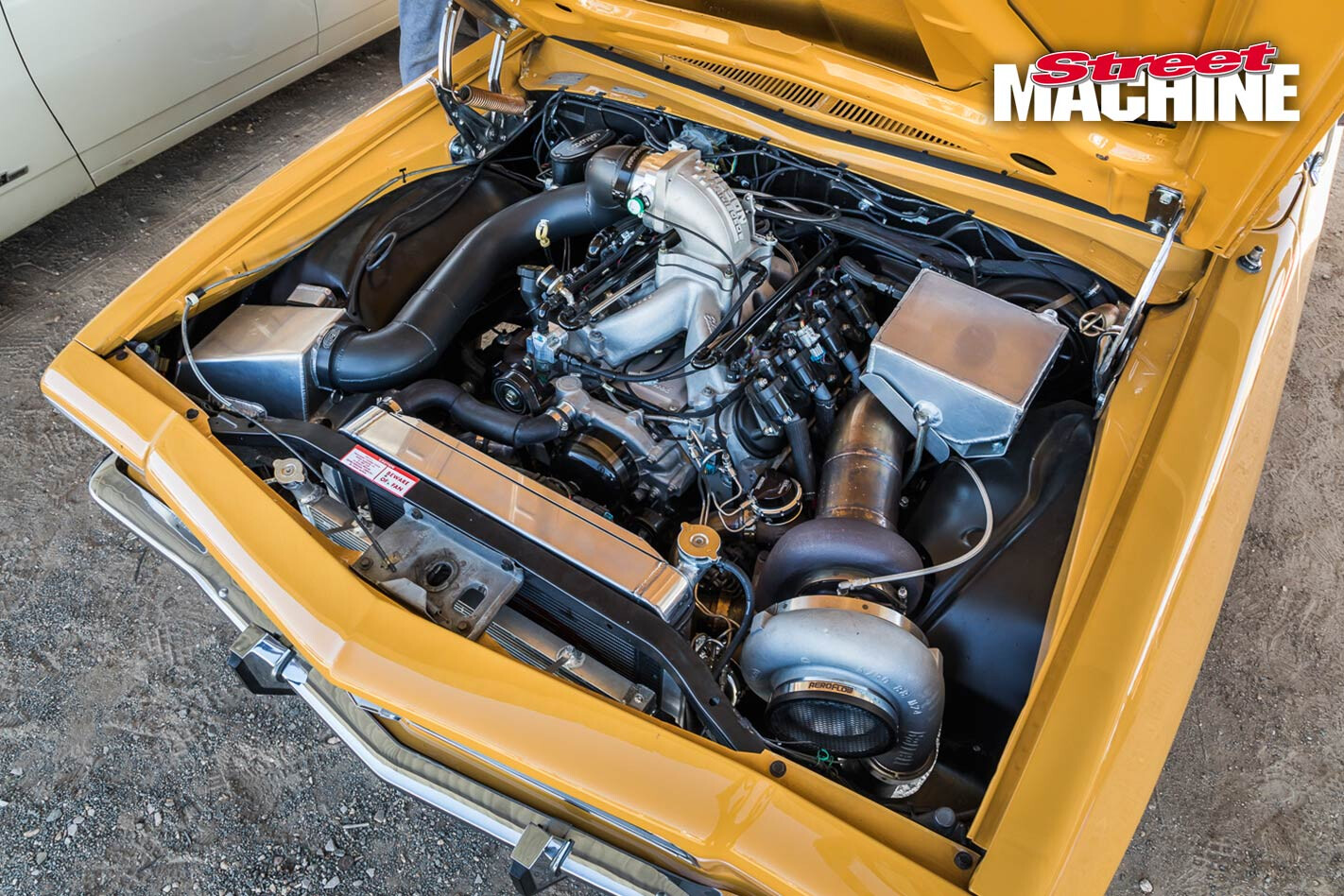 During the car’s development, it laid down 1000hp on the QuickBitz dyno. A drag racing virgin, Nik was stoked to run an 8.86@154mph on Friday. “I’ve done 17 passes in my whole life, and three were eight seconds!” he said. A ’cage and ’chute are high on the agenda, though the L-plates will stay for now.

With a 350 Chev up front, George Chalikouras’s Ford Capri (SM, May ’15) is heretical to some. The engine sips E85, while induction comes from a pair of GTX3582 snails. Since being featured, George has done away with the intercooler: “It’s a little bit less power, but less weight too,” he said. With the existing set-up, it makes 1050rwhp, which translates to consistent 8.20 quarter-mile times.

Danny Howe's killer XE ute is another Drag Challenge survivor. The Barra-powered beast cracked the eight-second mark for the first time at KOTS to the tune of 8.90-seconds at 160mph.

John Ricca took out the Fastest Six gong at Drag Challenge '19, but has since completely rebuilt the car with a twin-turbo, 427ci LSX deal. John is aiming for the six-second zone with this thing and is on his way, running a 7.80-second pass at 175mph on debut.

Adam Rogash's ALLSHOW was looking more stunning than ever and pulled a 7.8-second pass off the trailer in Friday testing. On race day, the VK went straght into the finals of Open Radial, but was caught napping on the line to give the win to Luke Pace's VN.

Three-time Drag Challenge winner Quentin Feast was also in the sevens, but his Torana's long-suffering engine cried enough in spectacular fashion after seven years of racing.