WHAT do you do after you’ve spent an idyllic day cruising the twin townships of Yarrawonga and Mulwala on the Victoria/NSW border in your sparkling hot rod, as part of the Lake Mulwala Rod Run? You wake up refreshed and head south a notch to Wilby for some eighth-mile, heads-up, grudge-match drag racing.

Around 30 competitors and hundreds of nostalgia drag racing fans turned up for some old-school, laidback lunacy. Some racers were just there to do a couple of passes, but the diehards stayed and raced all day. With the event strictly for pre-1965 cars, everything from a T altered to an FX Holden rolled through the gates to battle it out. The engines powering these beasts were just as varied – everything from a triple-carbied six-cylinder grey motor to blown small-block Chevs. 1. Vicki and Royden Hardcastle’s aftermarket alloy big-block Buick-powered 1928 Dodge stood out from the crowd. The New Zealand expats, now based in Shellharbour, NSW, have owned the Dodge for more than 20 years now.

“It’s been a long project; we brought it over with us when we moved over the ditch,” said Royden. “It started life as a four-door sedan, but we turned it into a sedan delivery. Most people think the motor’s a Buick-headed small-block Chev, but it’s all big-block Buick.” The motor was originally built by TA Performance in Arizona and uses the company’s custom-cast block and heads. It’s 555ci with 13.5:1 compression, and made 910hp/845lb-ft on the dyno running E85. “Originally I was just going to get a set of TA heads and put them on a factory cast-iron block,” Royden said, “but after researching the 455s I found the blocks aren’t much good for anything over 600hp. I was looking at TA’s website and they were talking about casting blocks, so I put down a deposit and got one. It’s a custom-designed alloy block and a lot stronger than the factory units. I’ve recently had BK Race Engines give it a refresh.” 2. Barry Milburn hit the strip for the first time in half a century in his bright orange FX Holden, and it’s fair to say he was living the dream at the nostalgia drags. “It was great fun,” he said. “Taking it down the strip brought back a lot of memories. It felt like the clock had turned back and it bought a tear to my eye the first time I crossed the finish line.” 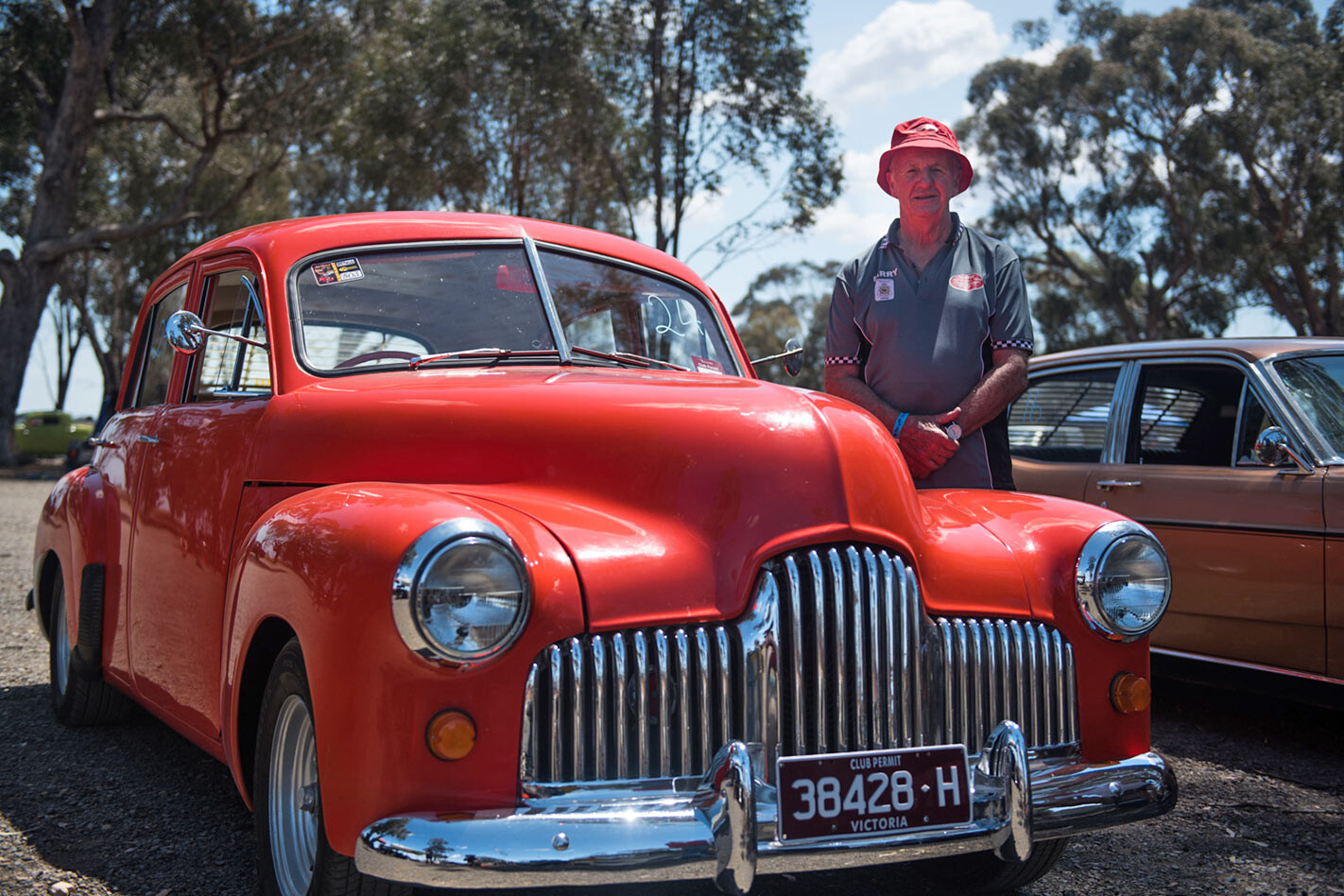 Milburn bought the car back in ’62, and back then he faithfully used motors built by Colin Russell, Allan Moffat’s mechanic. “I drag-raced it from ’62 to ’67 at Riverside and even won the C/Modified class in ’65,” he recalled. “I let the car go in the ’80s but bought it back a while ago and rebuilt it. Today was great, just to be able to get it out for a few runs.”

The triple-carbied six-cylinder grey motor might not have been the quickest car down the strip on the day, but Milburn managed a best of 13.00@95km/h, wrestling with the three-on-the-floor manual. “I messed up the shift between first and second with the H-pattern shifter,” he admitted. “I used to run a straight-line shifter back in the day.” 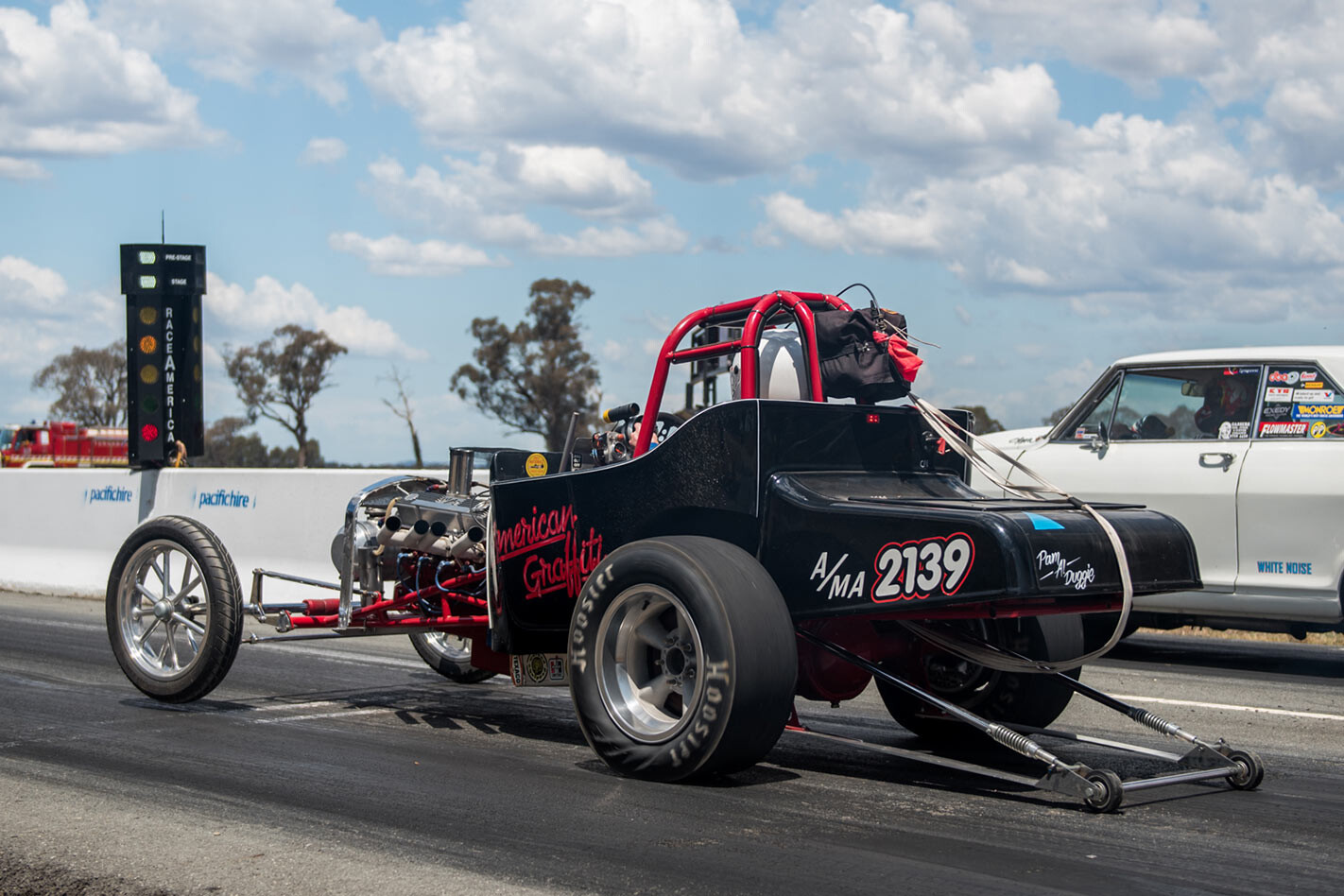 3. John Rice from Wagga Wagga had a grin from ear to ear all day. That’s because he was running his mechanically injected, fuellie-headed, 283ci small-block Chev-powered altered down the strip. His quickest pass at Wilby was 6.86@188.8km/h down the eighth-mile – also the quickest ET of the day. 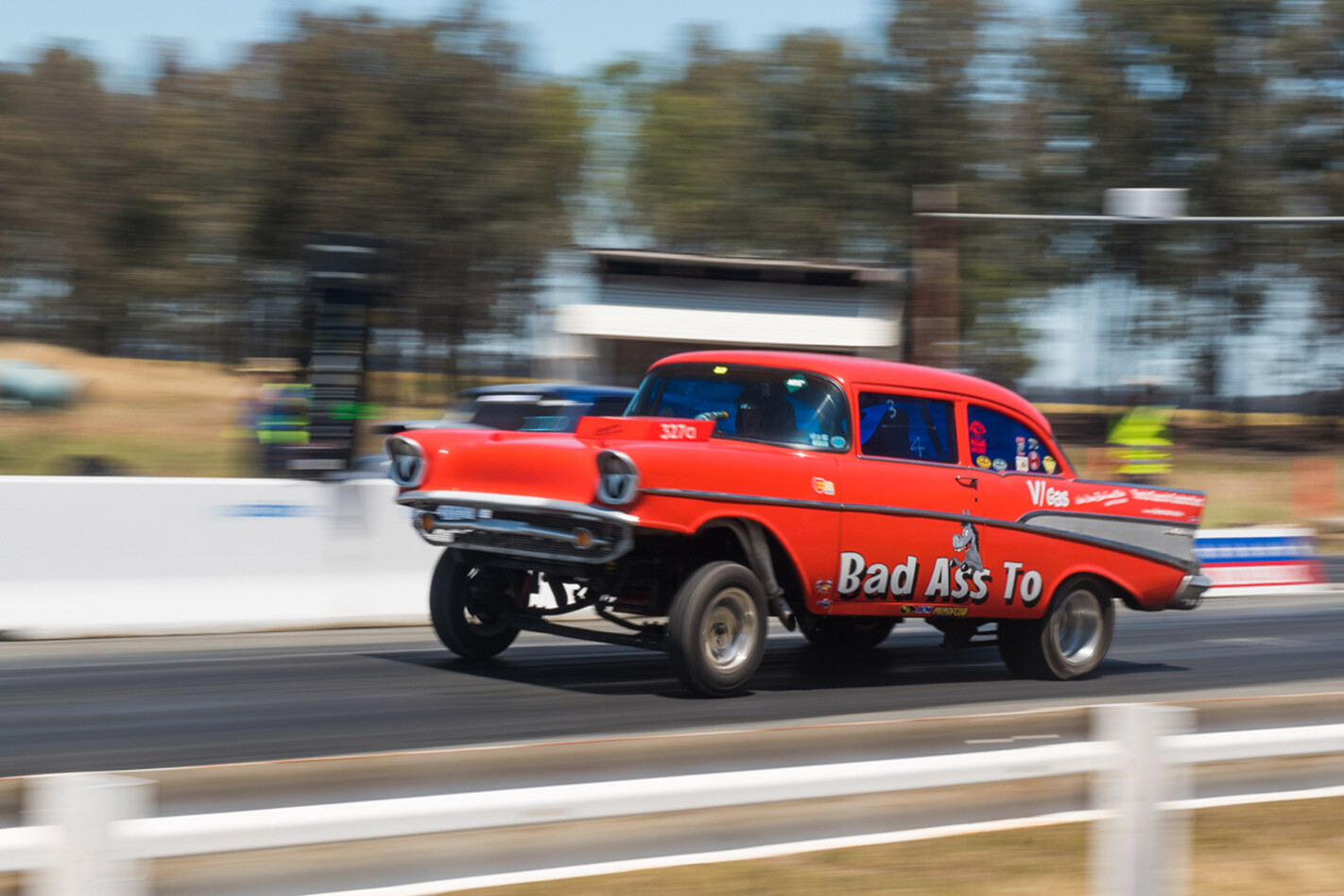 4. Peter Raines from Clifton Springs in Victoria hit the strip in his two-door ’57 Chevy gasser. It might say 327ci on the bonnet scoop, but there’s a nitrous-fed 427ci Dart small-block with Brodix alloy heads lurking under the hood, backed by a full-manual Powerglide with a 4500rpm stall and 4:11 nine-inch.

The car started life as a rusted-out four-door sedan. “It was ready for the tip, so I took the hot spanner to it and came up with this,” Peter said. “The fibreglass one-piece front is from Victor Bray’s old mould. I’ve been racing it in nostalgia for four years now and it runs 9.9-second quarter-miles.” His best run at Wilby was a 7.24@173km/h. 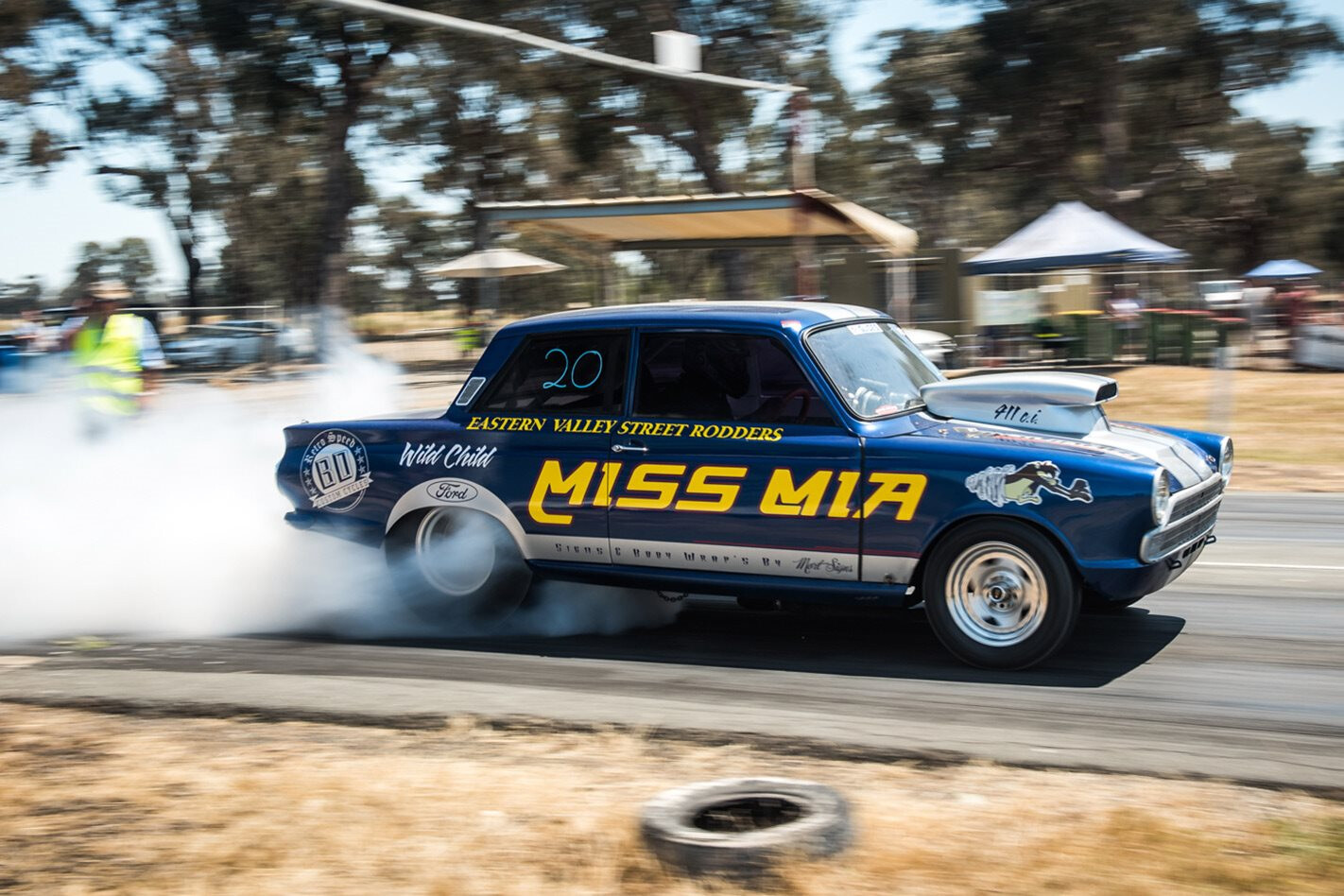 6. Joe Ellul struggled for traction all day in his Chevy Nova, pedalling the car to a best of 8.70@145km/h. 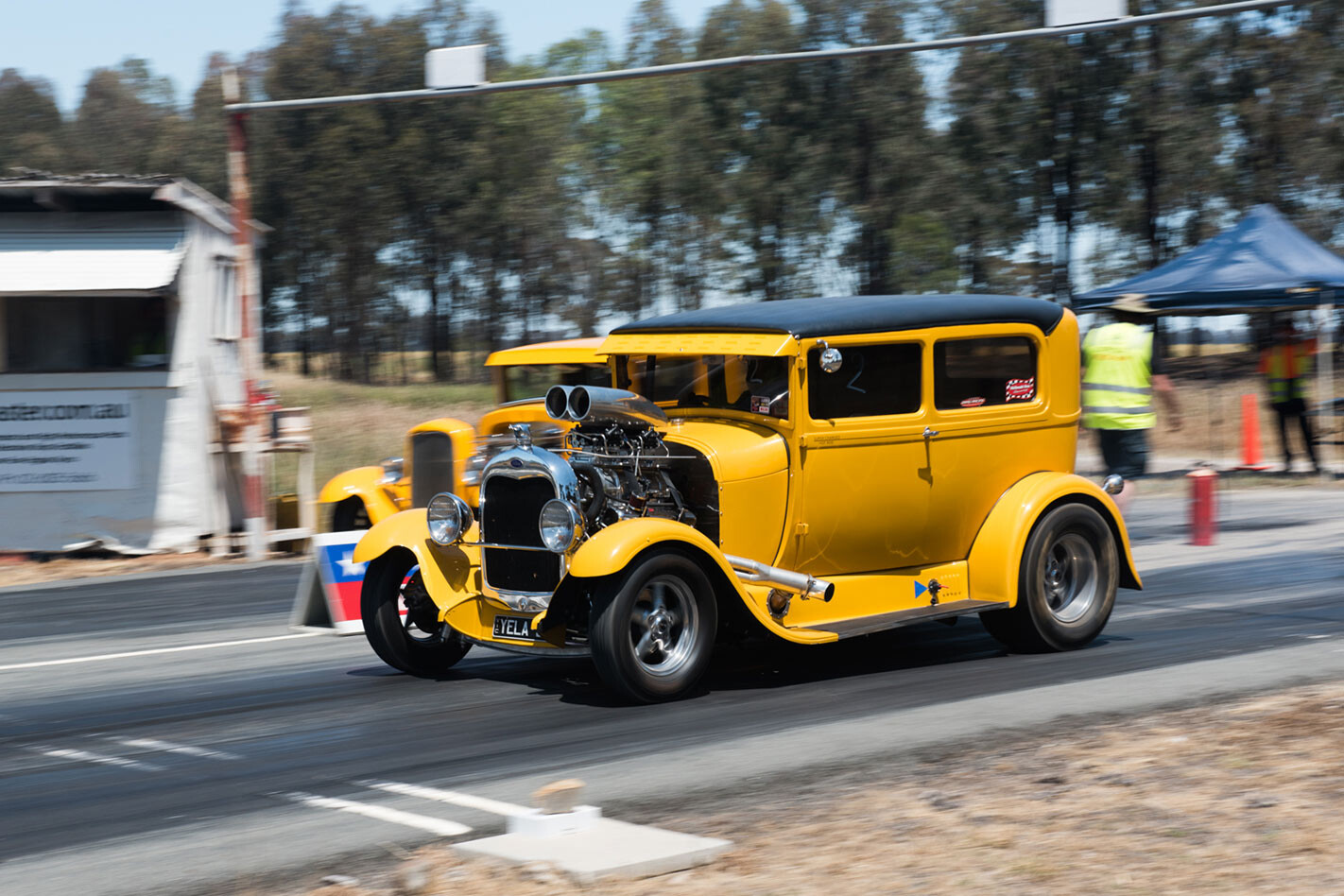