AMONG the cotton fields of South Georgia lies radial tyre drag racing mecca; an eighth mile of the stickiest blacktop, a loudmouth promoter, and horsepower by the tonne.

Each October, South Georgia Motorsports Park plays host to No Mercy. Now in its eighth installment, No Mercy is the baddest radial tyre race on the planet. It's the Superbowl – the Grand Final of radial racing – and there are enough brackets to cater to almost any radial tyre car, as long as you want to race heads up. Outlaw 632, Small Block No Time, Radial vs The World, X275, Limited Drag Radial – just some of the classes you will find entered into the timing system.

MORE Video: No Mercy 2017
7
Radial racing is home to more exotic combinations than those found in the ranks of Pro Modified. Kentucky's Andrew Johnson runs a ProCharged EFI Alan Johnson Hemi in a VIN-number 57 Chev

Acres of race haulers line the property, some the equal of anything you would find in the NHRA Mello Yello Series, but sans the sponsorship. This scene is still very much grassroots, though the more popular racers like Stevie Jackson and Keith Haney do now carry corporate logos and sell plenty of merchandise to passionate fans. 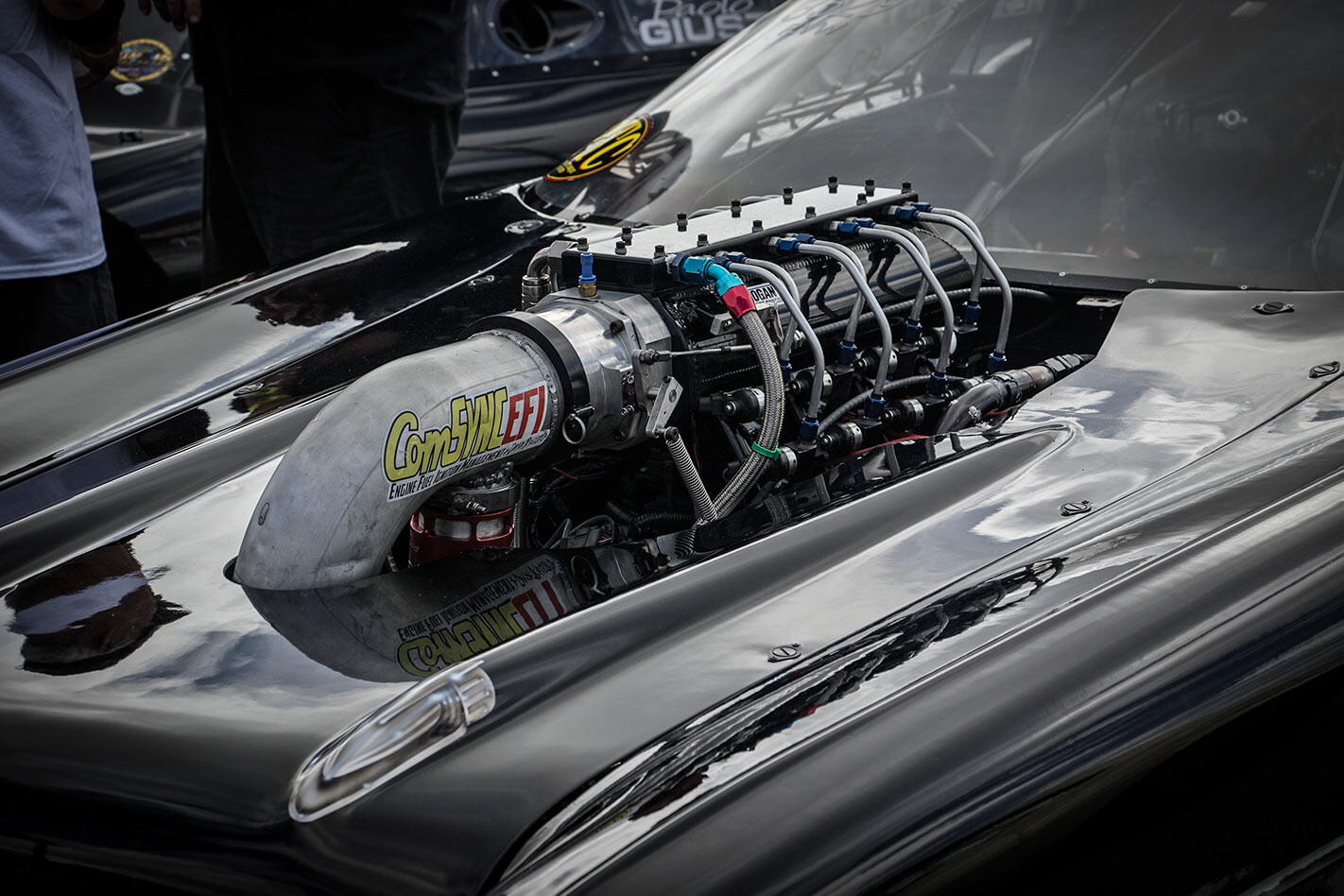 South Georgia Motorsports Park is not the prettiest venue. Australia is somewhat spoilt when it comes to drag strips, and popular homes of radial racing including Willowbank Raceway and Sydney Dragway are palaces by comparison. But what SGMP does have is a quality surface and a location in the heart of the south east, the stronghold of doorslammer racing in America.

7
While the new Dodge Challenger can be frequently spotted in NHRA's Stock and Super Stock classes, examples are less common in heads up racing. Fortunately, Rob Goss's X275 Challenger bucks the trend

That tacky surface is essential to radial racing, because the secret to getting a radial down a drag strip quickly is to 'dead hook'. A traditional drag racing bias ply slick requires wheel speed – controlled wheelspin during the launch that twists the sidewall and absorbs the horsepower. But where those tyres suffer on the big end, a radial can make up with less rolling resistance. 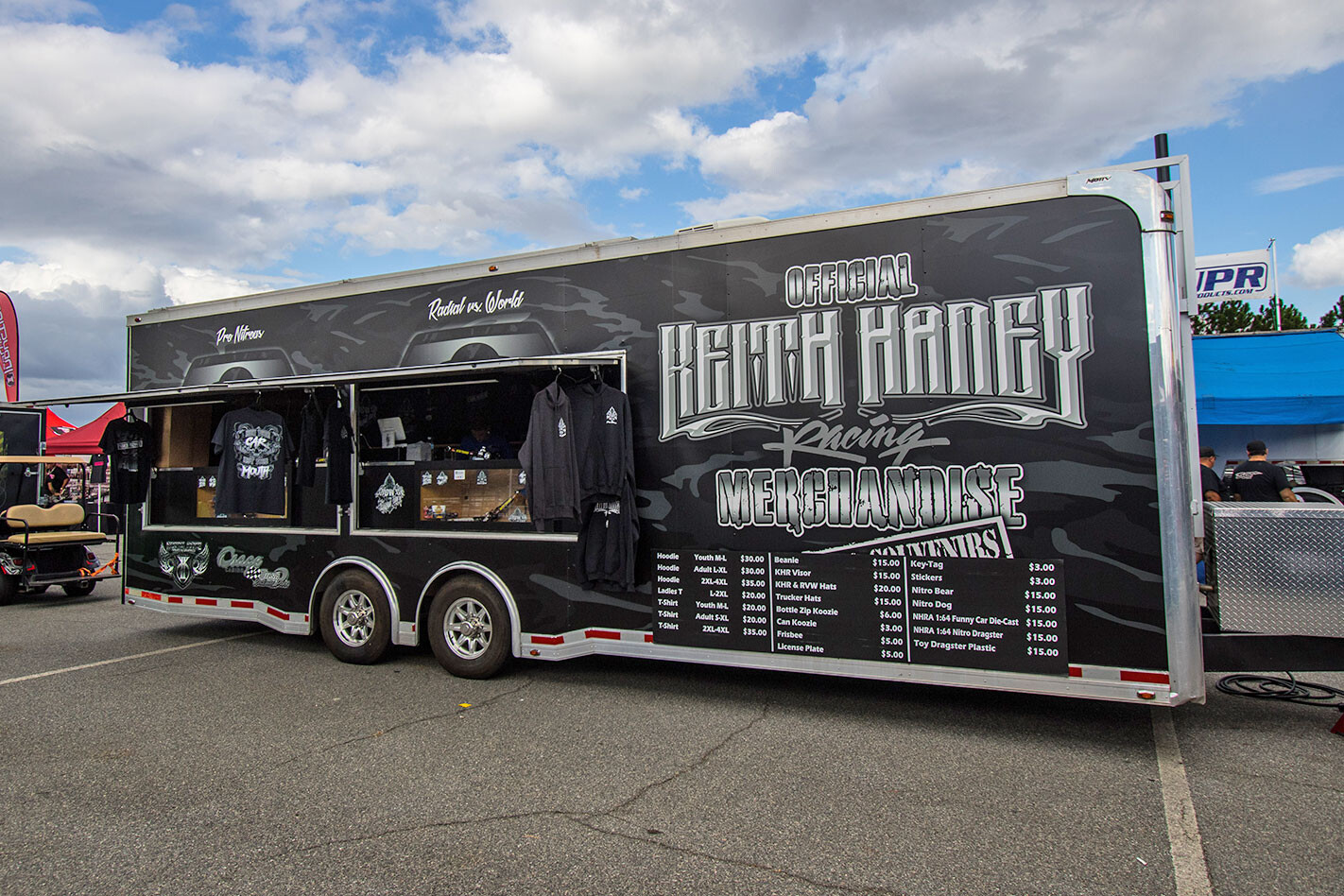 Keith Haney is one of the big names in radial tyre racing. Such is the scale of his popularity, he even has his own merchandise trailer

Radial racing also differs from the big show due to the presence of traction control. All but necessary for big horsepower cars, the power is fed in gradually during a run, and the sound of the limitation is particularly noticeable on some cars. It has been advances here and in tyre technology that have seen radial cars reach ridiculous times of 3.7 seconds over the eighth mile.

Mickey Thomson tyres are the mainstay of the radial scene, but it is not only heads up racing where they are finding a market. The evolving rubber is proving to be more consistent too, and bracket racers are beginning to adopt the style.

7
Radial tyre technology is rapidly on the improve. While the tuning mantra is different (a dead hook compared to the wheel speed needed by a bias ply tyre), the results are getting closer and closer. More bracket racers are beginning to choose radials due to their consistency

But back to No Mercy. This year's event wasn't quite on the scale of the 2016 version with nearby weather keeping crowds down, but it delivered many epic performances, not the least of which was Marty Stinnet, who belted out a 3.751 from his small block Chev to lead Radial vs the World qualifying. But the $50k would eventually go the way of Dewayne Mills, whose consistent 3.7s during eliminations could not be topped, even by radial legend Stevie Jackson. One of Australia's own radial tyre heroes, Frank Marchese from Dandy Engines, was at the event taking in the atmosphere and learning much to take home.

7
Radial tyre race tracks are prepped to within an inch of their life to reduce wheelspin. This No Time racer suffered one of the consequences of that – a broken tailshaft

“It's the biggest radial race; the only place on the world you will get the biggest motors and the smallest tyre,” he said. “They are down to 3.75 on the eighth mile – almost equal times to Pro Mods. “We're here hanging out with great friends and great racers, in a place where the people are so humble and so happy to be doing what they love most.” 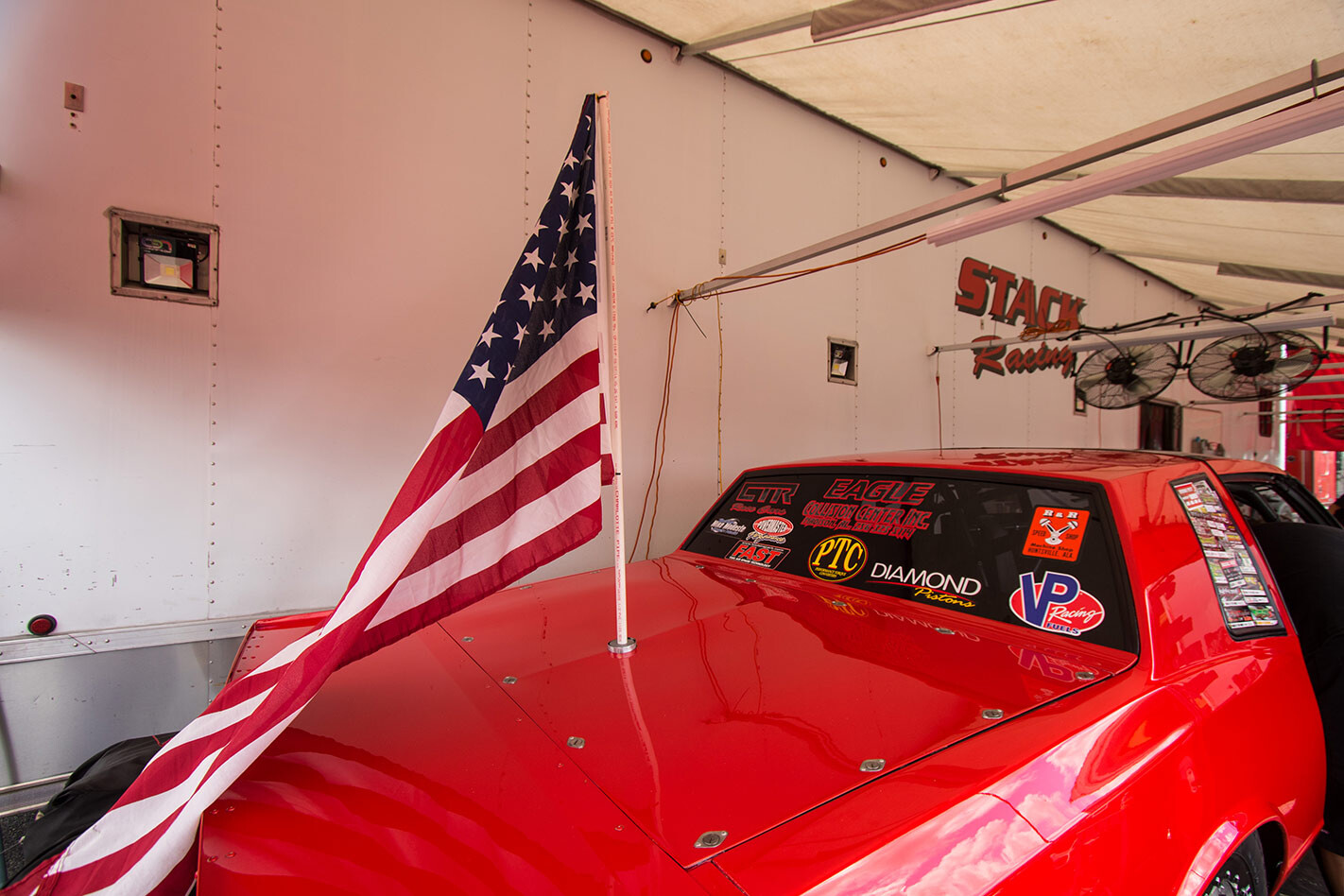 Shane Stack's Monte Carlo carries twin turbochargers and a popular American flag, making the spectators hoot and holler whenever the car comes to the line

You can put the venue and the prizemoney aside (though it is substantial) – people are attracted to this event because of the people. 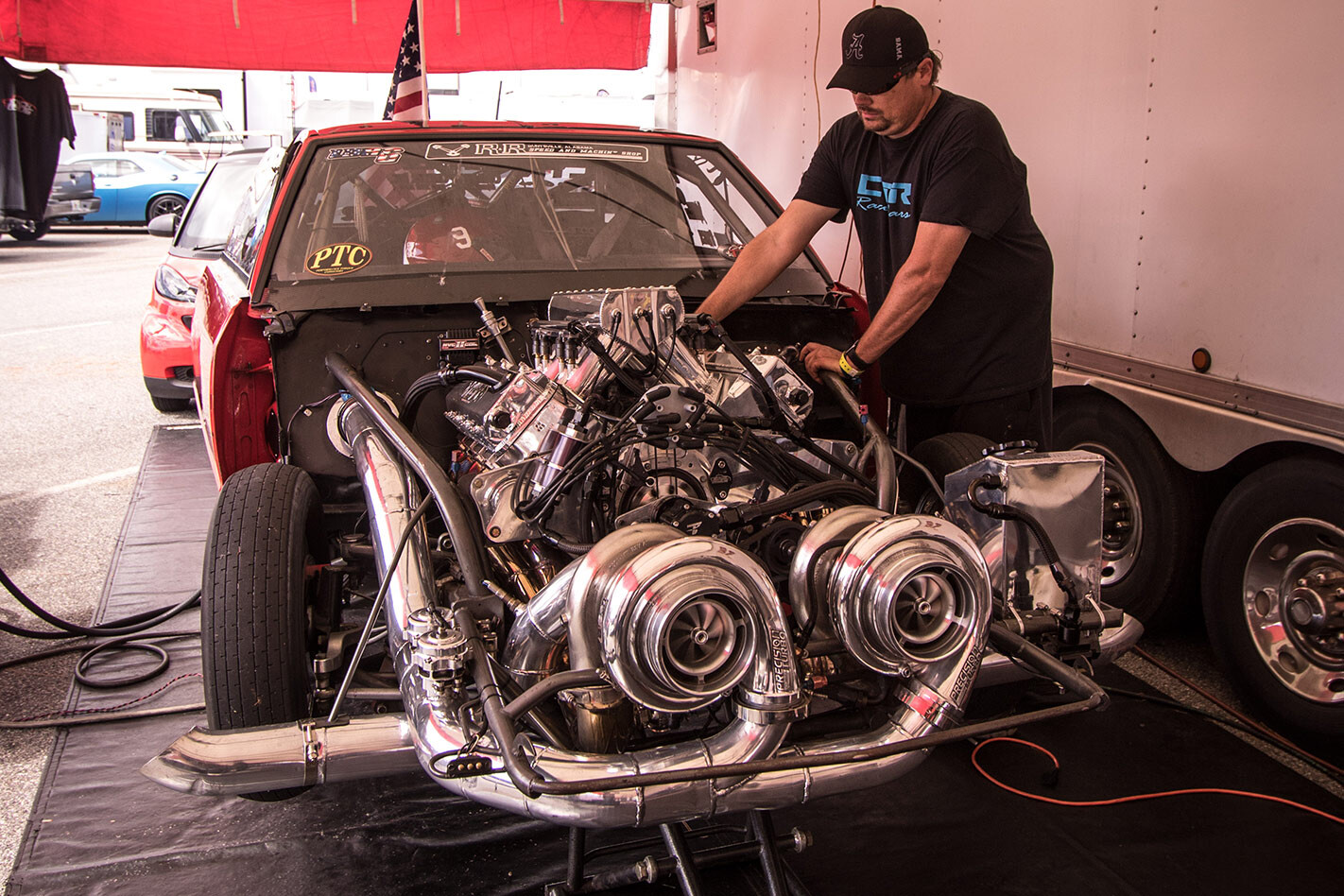 Jeff Naiser competes in Radial vs the World with his nitrous 69 Camaro and he said it's simply a who's who of the radial world. We can't find it on Google, we couldn't find it in the pits, and if we didn't have a picture we wouldn't believe it existed. A wheelstanding Jeep on radials and a jungle gym around the driver

“All the radial racers are here – the baddest of the bad. This is where they all come to see who is the best,” he said. “Duck puts on a hell of a race.” 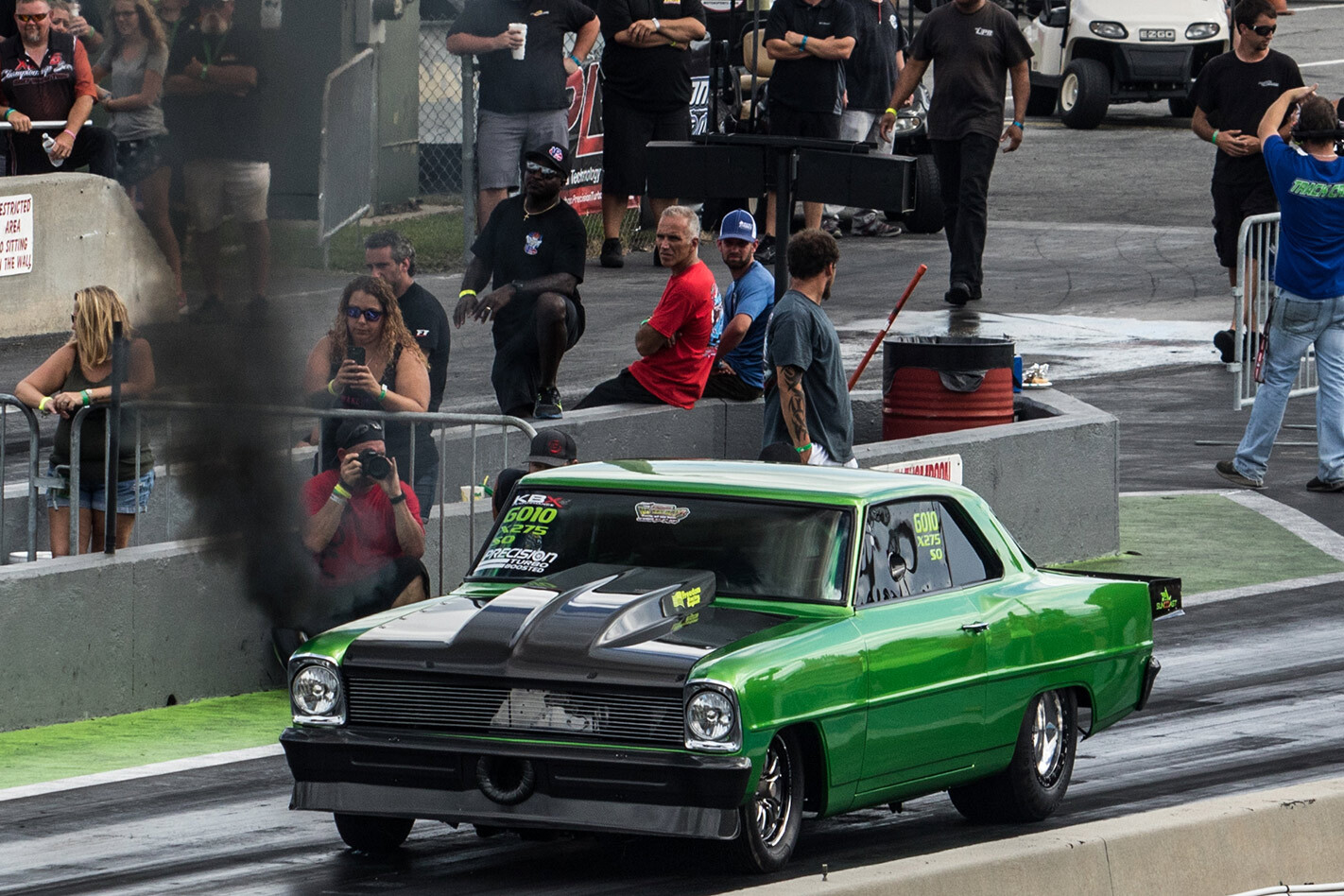 Ryan Milliken's Chevy Nova looks pretty much like any other radial tyre car until it starts up and a plume of thick, black smoke enters the atmosphere

Duck would be event promoter Donald 'Duck' Long. Famed for his Facebook memes, no-BS attitude and flamboyant fashion sense, including novelty sunglasses and fur coats. He has a knack for gathering together the quickest cars and giving his races a sense of legitimacy. Hardcore fans know that the Duck races deliver on entrants. There is a 6.8L Cummins diesel under the hood and the thing moves seriously quick, hitting mid-to-low fours for the eighth mile

Eric Leeper runs a beautiful ’66 Ford Mustang in X275. Like Naiser, he believes knowing the big guys will always be at the race makes the difference.

7
A big part of events like No Mercy 8, which has its roots in grudge racing, is betting on each pairing

“Donald puts on a great event, it's home of the flying cars [a reference to several 'blowovers' in previous years] and the fans love it,” he said. 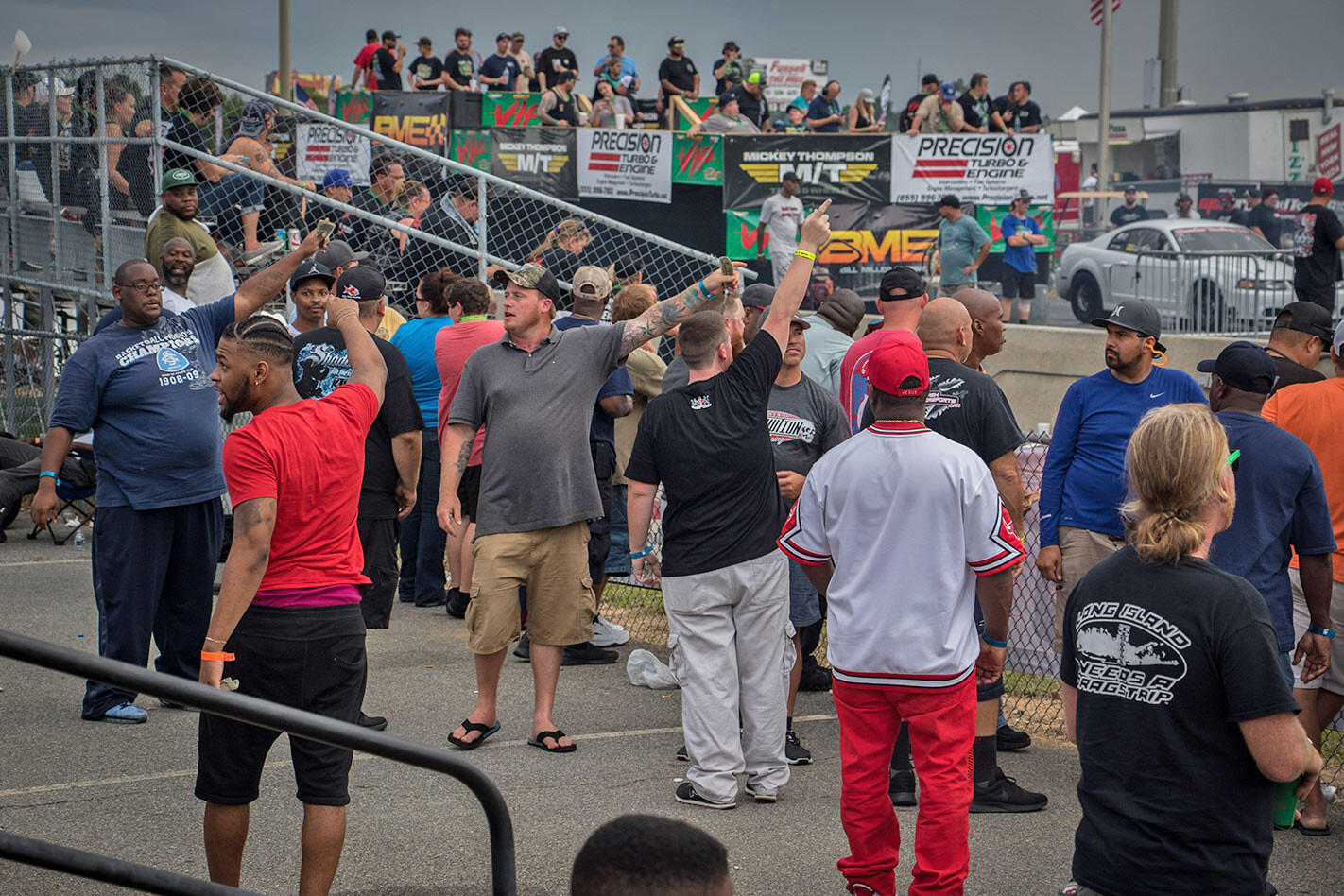 “Going fast on a small tyre has come a long way over the years with the improvements in technology, but it is pretty crazy how quick everybody is going on such a small radial tyre.”

But times aren't everything. No Mercy also caters to fans of no-time grudge racing, where only a win light is displayed. This is popular with the impromptu betting rings that pop up around the venue during the event. Betting on races is a big part of drag racing in the south and a decent amount of money changes hands. 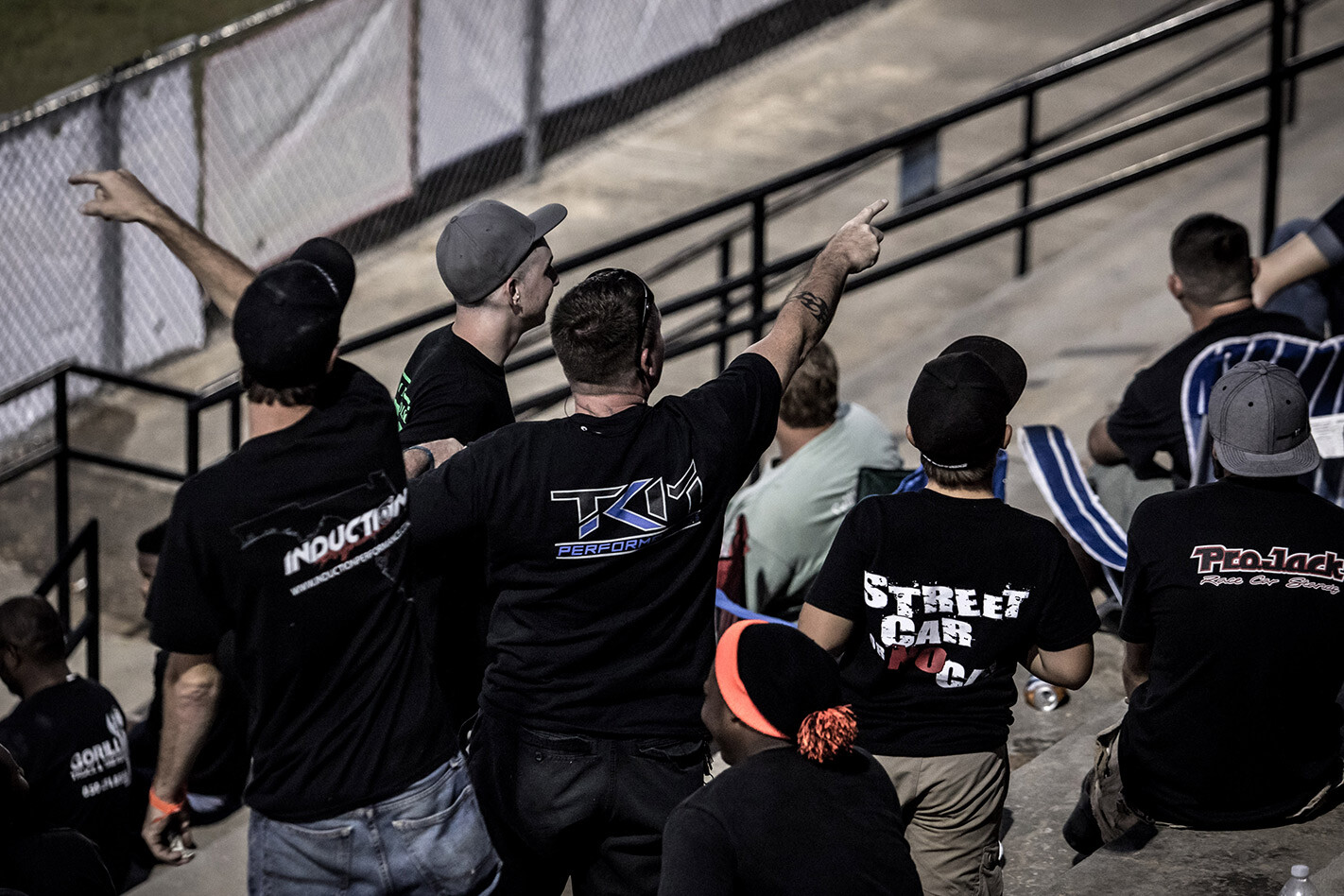 Watch the crowd as the burnouts take place and you will see arms waving towards the track or away, indicating preference for which lane punters want to bet on. Find someone who wants the other lane, decide the amount, and then wait for the result. During delays in racing, betting continues on whatever can be found, including a practice tree, and flipping quarters against the grandstand (whoever gets closest wins). David Pearson stood up big time on Friday night, leaving a shower of sparks in his wake as he returned to earth

Knoxville, Tennessee's Jack Greene runs a pretty Yenko-tribute 1970 Chevy Nova and we will leave it up to him to summarise. He's quietly spoken and not proficient in front of a camera, but the passion in his voice is part of what makes this event. You can tell how important a No Mercy win would be to him. “It's the Superbowl; the biggest race of the year. Everybody wants to show how bad they are,” he said. “There is a lot of work, a lot of time, just to make this one race. You're out here trying to do what everybody thinks can't be done.”