Cookin' with gas at the Sunset Strip Nostalgia Drags

NOSTALGIA Drags – just the pairing of these words conjures up inspiring images of drag racing’s rich history. But when these words denote a real event – well, that’s the next level of inspiration entirely, so we just had to get along to Mildura’s recent Nostalgia Drags for a look-see. 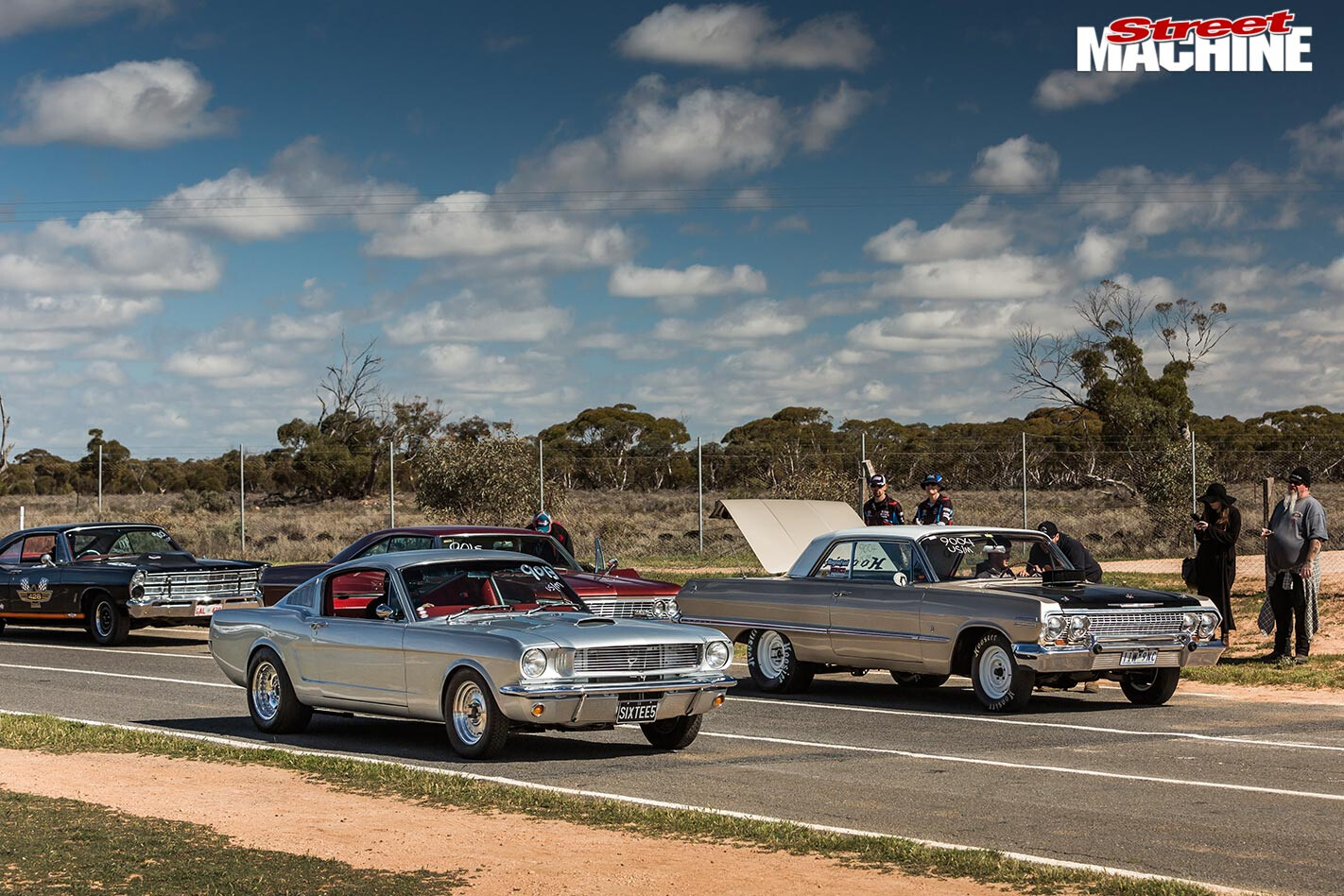 In its second year at the town’s Sunset Strip eighth-mile dragway, the event attracted a 92-strong field and a heap of punters – most driving half a day from Adelaide or Melbourne. And thankfully there was sunny weather, perfect for racing.

This year, the husband-and-wife team of Kingsley and Lauren Kuchel of the Sunraysia Drag Racing Association (SDRA) put in the hard yards both organising and running the event, while Kingsley also campaigned his FED and one of their sons, Nathaniel, competed in his junior dragster. Quite a feat. “The SDRA does all the groundwork with entries, queries, and track and race prep, but we’re supported by the Australian Nostalgia Racers, who not only promote the event but support it by bringing up most of their members to either race or watch,” Kingsley said.

Sensibly, they kept the format simple yet effective, and onlookers watched ETs plummet as the track heated up.

The 15-strong Vintage Gasser bracket had the crowd meerkating as soon as these wild rides hit the bitumen pumping out powerful three-quarter-track burnouts. The gassers soon justified the spectator interest by running some impressive times – the quickest a 5.58@125mph qualifier from Damien Kemp’s Funderbolt. 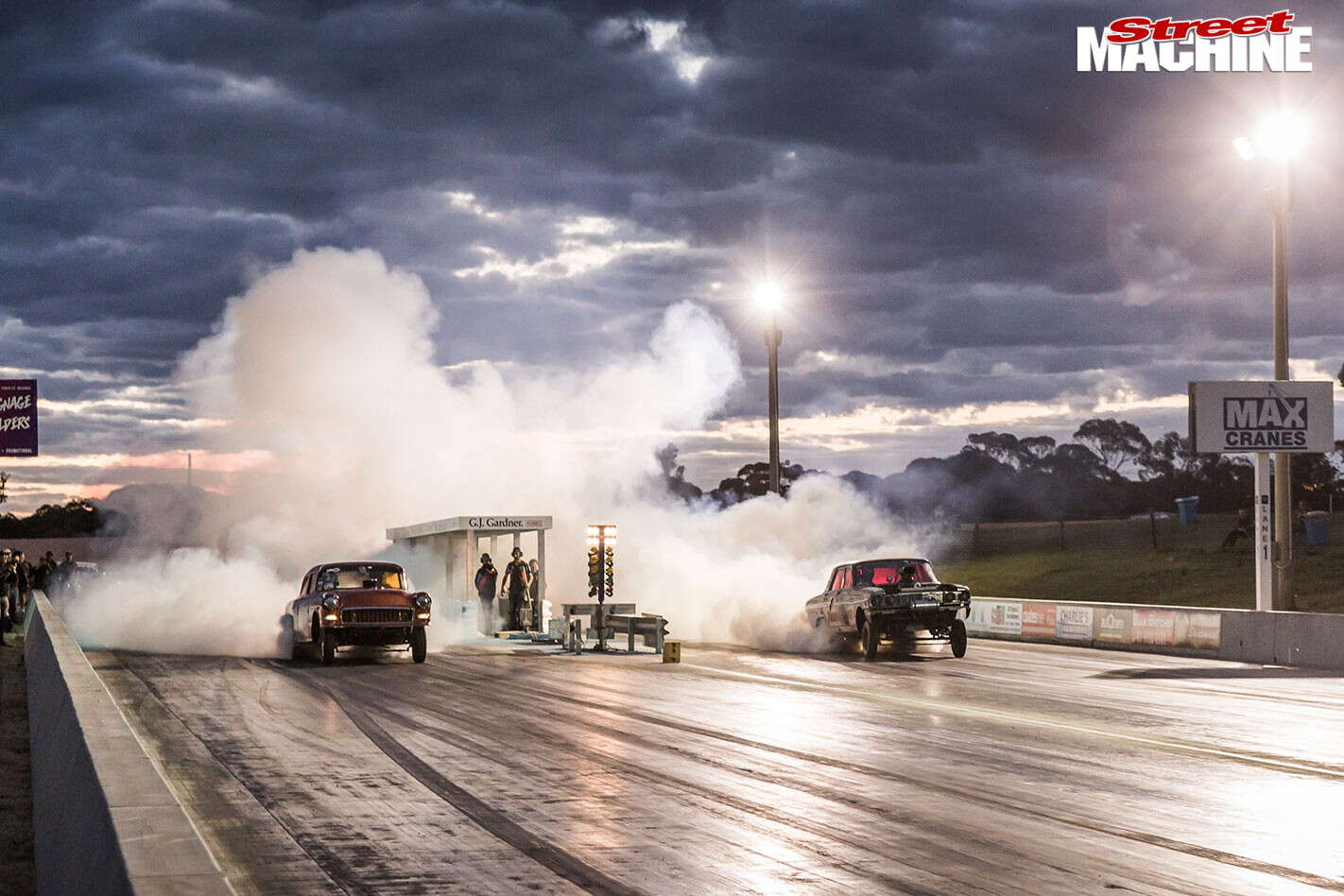 The eighth-mile track was easier on the drivelines than the usual quarter-mile distance, and arguably offered a better spectacle for the punters, as from the grassed mound it was easy to see who won each race. Even better, the track is beside the pits – no two-storey mound here – allowing for quick and easy access and contributing to an all-inclusive atmosphere. The whole day had a relaxed vibe thanks to the welcoming volunteers and long-term know-how of the officials.

On track, the wide range of brackets on offer gave anyone keen to race with an age-appropriate ride the chance to do so. Aussie Muscle was chockers with 19 entries, while the other classes of American Muscle, Hot Rod, Junior Fuel, Top Gas, Top Eliminator and Junior Dragster were also nicely filled out. 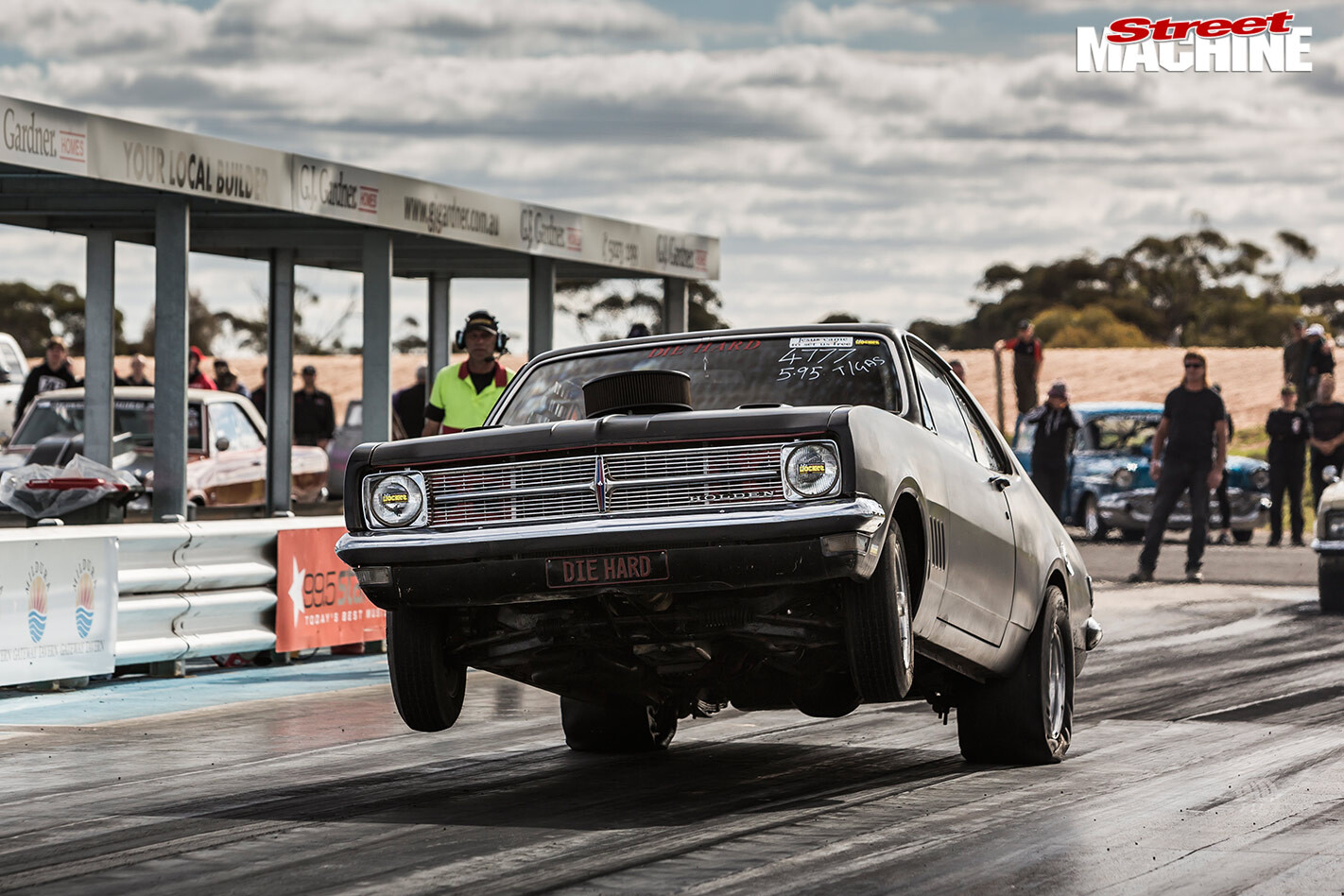 The highlight of the day was the dual full-height wheelstands from Charlie Pitt’s HK Monaro and Dylan Argent’s Capri in the Top Gas bracket. This isn’t usual fare from a Monaro, so snapper Chris and I hunted the HK down and were blown away by the powerplant up front.

“It’s a 630-cube Merlin big-block Chev built by Darren Morgan,” Charlie said. “It should be good for about 3500hp, but we’ve backed it down to about 1000hp. It usually does small wheelstands, nothing that big; today it scraped the rear beaver panel.” Crikey!

Continuing our wander through the pits, we stumbled across the original Dirty Harry humpy of Harry White alongside its replica owned by Wayne Stevens – both sporting a trusty Holden red 202. Wayne was happy to use the go pedal too, running a healthy 7.86@79mph. After the morning qualifiers, the arvo gave way to round-robin racing. Later, as the sun set upon the wide horizon, the chill rolled in and the drag cars dwindled in numbers as the finals wore on. Once the battles were won, drivers gathered for light-hearted presentations before heading to the club rooms for some grub, a warming fire, a live band and some bench racing.

“Everyone partied well into the night,” Kingsley laughed, “but Sunday started at 8am with breakfast before the track opened for the Funday. It is hugely popular, especially for the Vintage Gas guys, as there is no timing system, just a good old-fashioned flag-drop start. These guys go nuts for just over four hours.

“We were astounded by how many people came up and thanked us for a really enjoyable weekend. Many said it had reminded them of the good ol’ days of drag racing,” Kingsley continued. “The crowd had grown threefold from last year, so we’re confident that this could become one of the biggest and best nostalgia weekends of the year. Not bad for a small, regional track.” And while the event was definitely nostalgia-filled, it’s the overall vibe that’s the key to its future success. Not only was it incident-free, but it was full of families with a heap of camping onsite, cheap spectator entry – 10 bucks – and a very welcoming atmosphere. It was so good I reckon we might just bring a worthy racer next year. 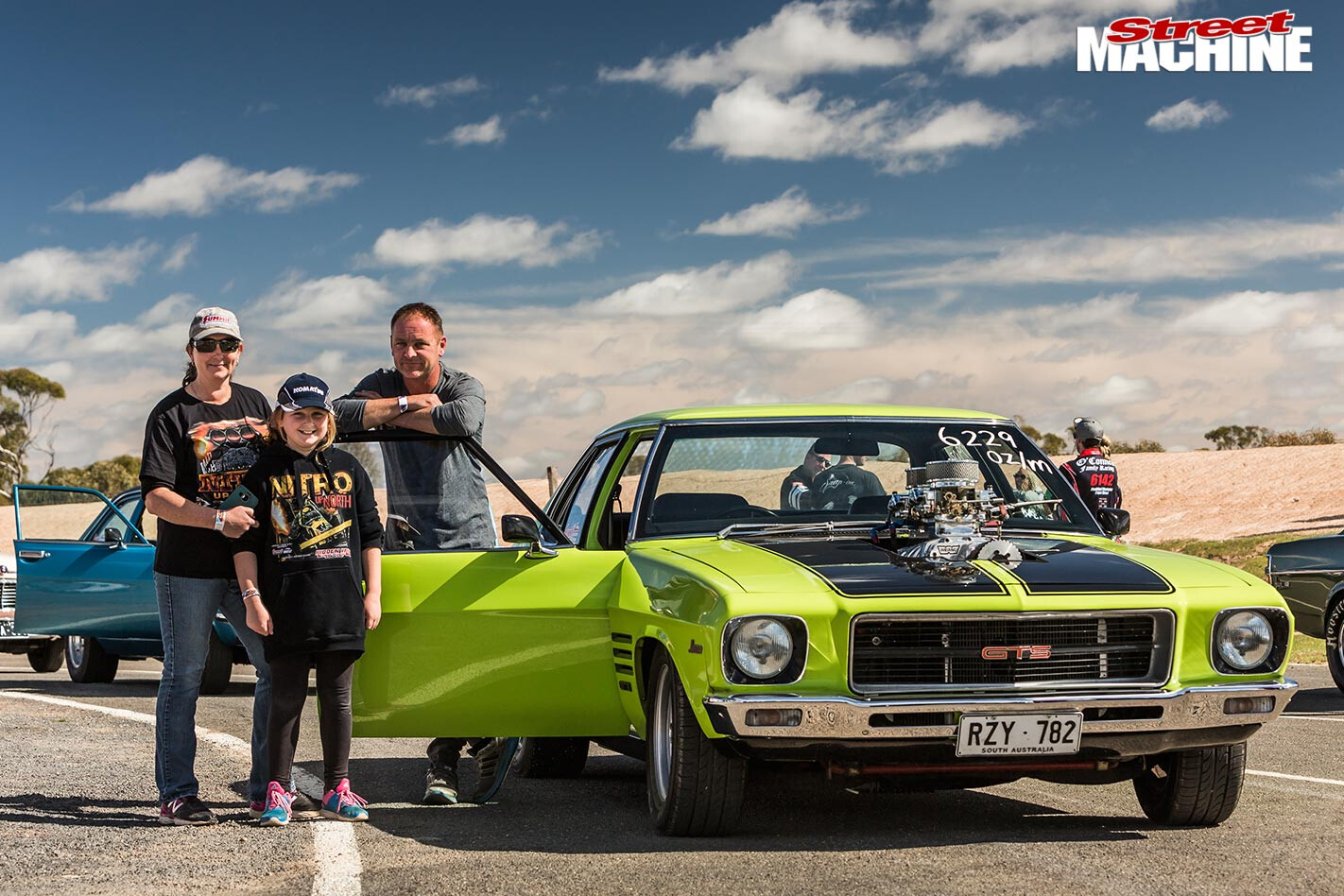 2. Long-term racer Mike Bowden took out the win in the US Muscle class, with mid-10sec passes from his the heavy-bodied, 428ci-powered ’67 Ford Galaxie, dubbed Hemi-Hunter 3. Mildura local Charlie Pitt’s matte-black HK Monaro was a crowd favourite after standing on its rear bumper. “I was surprised at the height of the wheelstand; it usually does a small one but nothing like that,” he said. “I know I lose time doing it, but I enjoy it” 4. Peter Gourzis had a keen hand from son George in prepping the white VC Valiant that he’s owned since before George was a twinkle in his eye. Up front Peter’s added mechanical injection to the worked 265ci Hemi running on methanol. Behind that is a 904 trans and HiLux diff. Running consistent 7.4s saw Peter take out top honours in the Aussie Muscle bracket 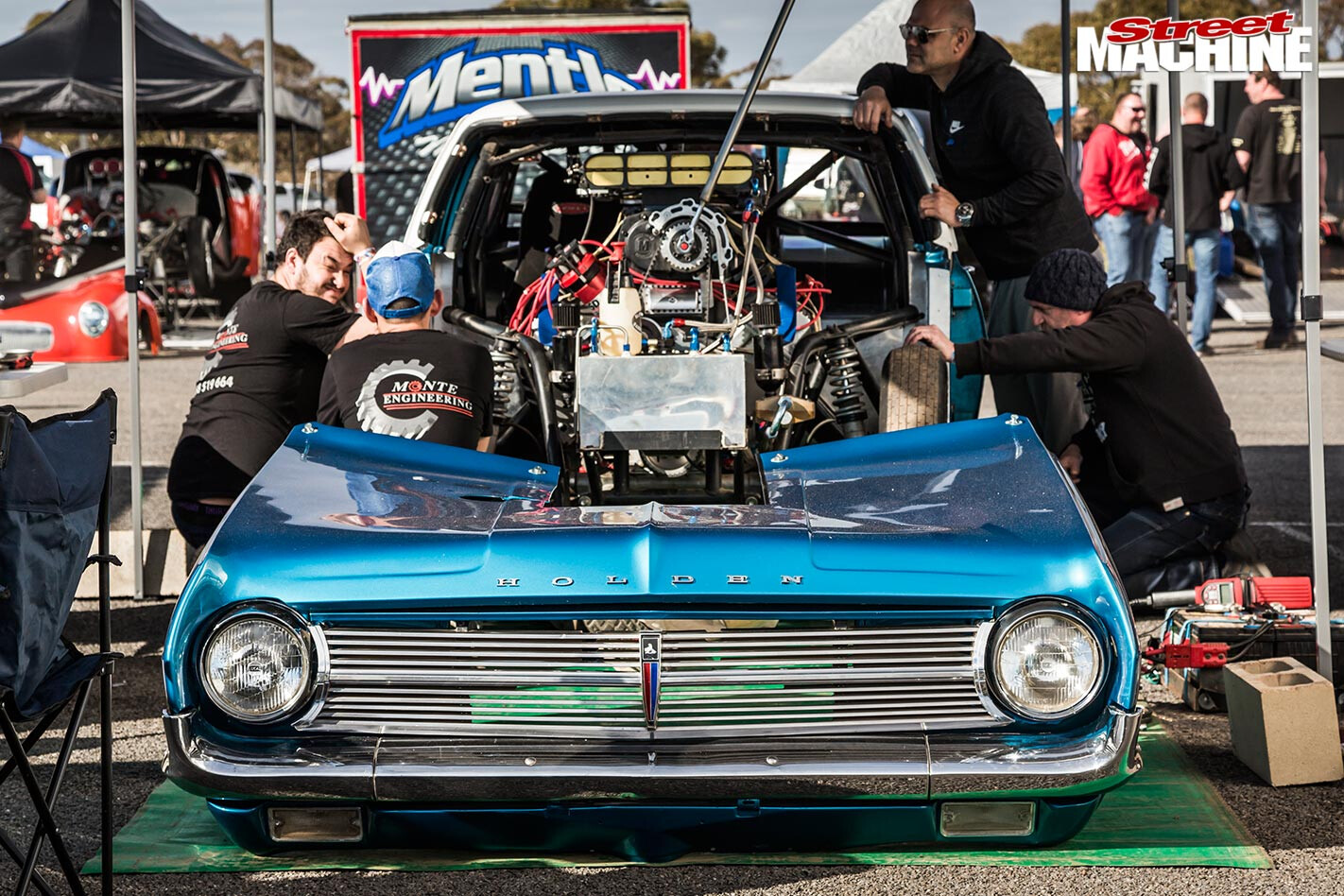 5. It’s a rare sight to see an HD-bodied, full-chassis race car. The car is piloted by Vince Monteleone in the Top Eliminator class. Running a blown 551ci Hemi, the beast was surrounded by tool-wielding helpers all day as Vince set up for licensing and to dial-in the brute 6. Dale Tucker’s been laying rubber at the Sunraysia strip for many years, and at the Nostalgia Drags his cleanly presented 468ci big-block Chev-powered HQ battled it out in the Top Eliminator class, running a 4.89@133mph qualifier 7. Cameron Harris’s yellow FED was originally built in Ohio during the late 50s, but he’s been the custodian of this racing museum piece since 2011. It’s powered by a 283ci ’Vette engine, backed by a Powerglide and 9in. Cameron punted quick ’n’ low wheels-up action before the slingshot ran straight down the tarmac on his low-6sec passes 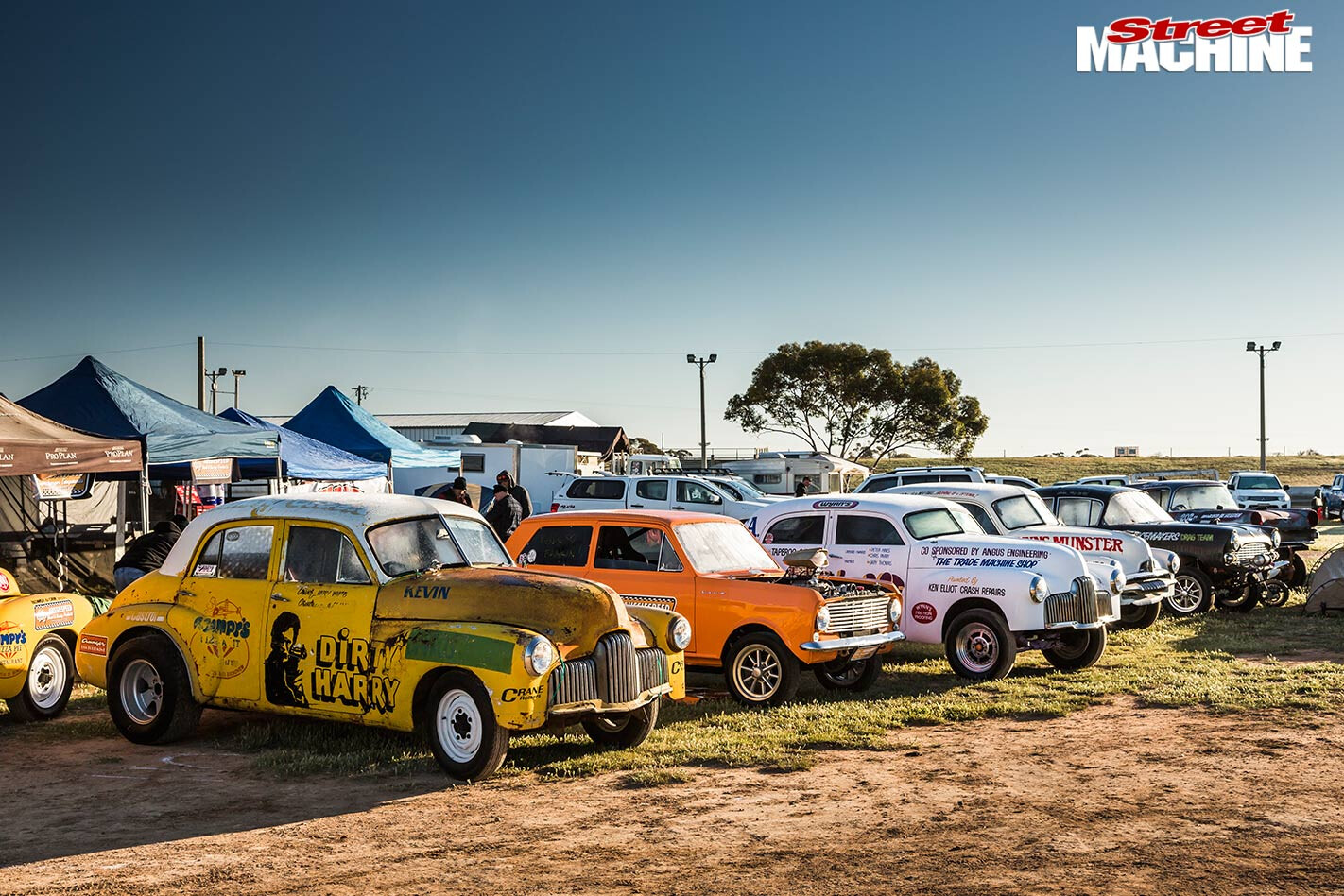 8. Romano and Michael Puntin of All Car Restorations are responsible for most of this early-Holden goodness. The pair have built the replicas of She’s Ace, Wynn’s Munster and, most recently, have given the Dirty Harry FX new life 9. Steve Costa never fails to impress the onlookers whenever he pilots his Blaster ’57 Chevy gasser down the strip. At the Nostalgia Drags he kept up the show, with three-quarter-track burnouts and a lot of wheels-up action, pumping out 6sec eighths 10. Junkers Car Club member Ryan O’Hara’s kick-arse ’59 Vauxhall Victor gasser fitted in a treat at the Nostalgias. Built in period style and powered by a largely stock 202ci Holden six with a Toyota SC14 blower, The Convict ran a PB of 8.7 and picked up a tyre, and Ryan was suitably stoked. Since the meet, he’s sold the old combo and is in the process of upgrading to a Weiand 177-blown Ford crossflow 11. Tony Travers’s FED has a mixed east-coast Australian heritage, yet he’s rebuilt it from the 318ci Chrysler forwards. “It was easier when I was 30 years old; it’s fast now I’m 60,” he laughed. Tony piloted the slingshot in the Junior Fuel class, running a 7.93@105mph qualifier 12. Clare Dousset took home the tinware in her V6 Chev-powered ’32 roadster after consistent improvement all day. Her PB was 9.83@73mph in the Hot Rod class 13. Kingsley Kuchel ran the event with wife Lauren, and campaigned his 60s-style heavy-flaked green FED. Their son Nathaniel also raced his junior dragster dubbed Mum’s Nightmare for his first-ever round win. Kingsley’s slingshot, known as Sweet Sensation, features Ed Roth-esque guards and a Caddy brake light mounted centre-rear. He ran the 383ci Chev-powered rail to a 5.79@116mph qualifier, with a small wheelstand before slinging it arrow-straight down the track 14. Clinton Horne’s ’23 T-bucket altered, Ready To Rumble, sure did give off those Nostalgia vibes. And the T tracked straight down the tarmac, clocking a 6.72@106mph 15. The ’41 Willys dubbed Wild Willy belongs to Milan Dokic, also known for his MENTLE ’69 Camaro burnout car. Undoubtedly, it was the quickest Willys at the event, running a 4.7@127mph qualifier in the Top Eliminator bracket 16. Scott Mackenzie’s still carving it up in his street-legal Chev-powered FE, qualifying with a stout 6.68@99mph in the Australian Muscle class. Check out more on Scott’s FE at streetmachine.com.au 17. Nikolas Karanovic was the coolest 17-year-old in Mildura as he piloted his mum Karen’s ’69 Plymouth Barracuda down the track. When he wasn’t cutting mid-7sec passes, he and the 340ci Chrysler-powered beast had tow-car duties for his dad Ned’s Top Gas-winning ’57 Chev 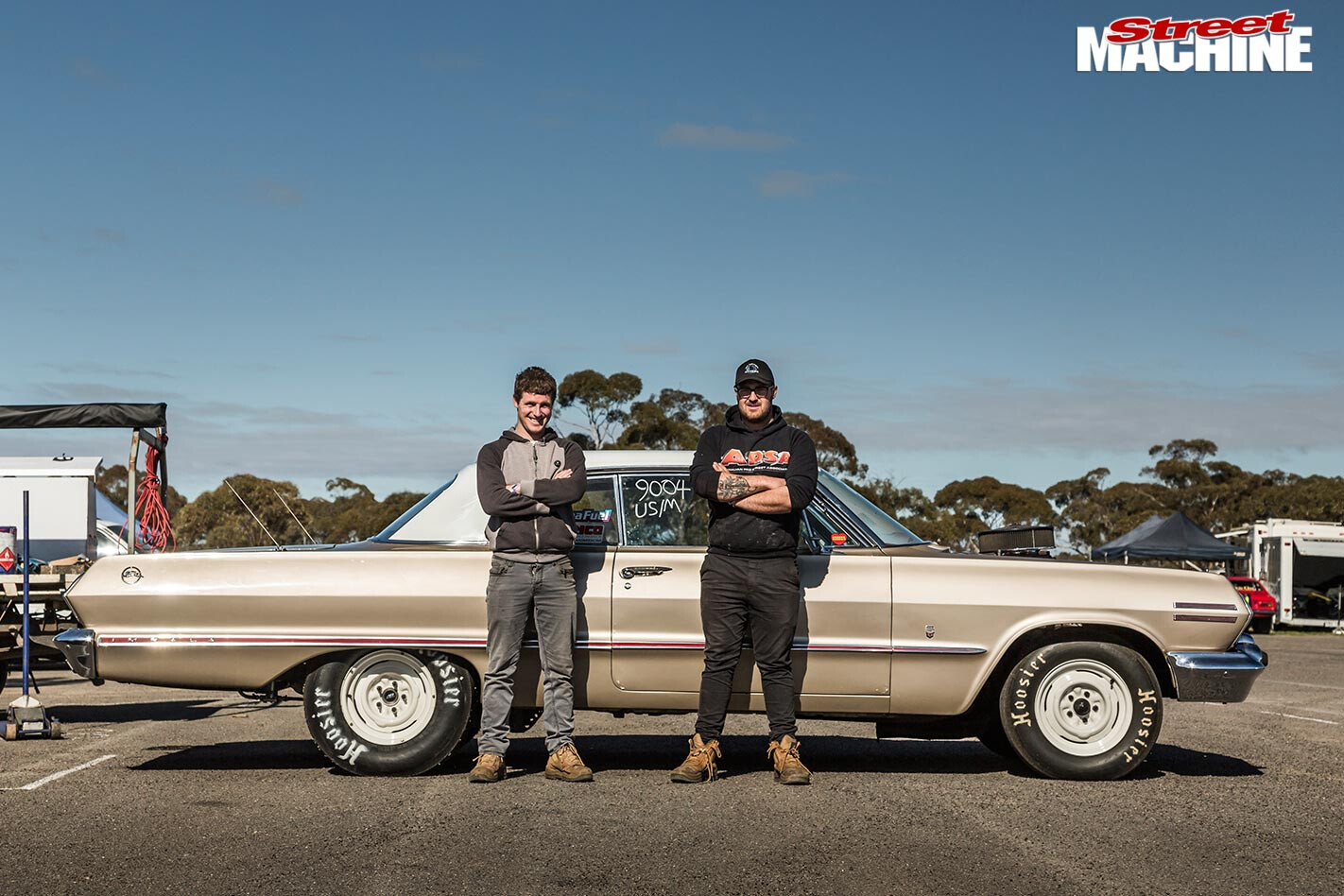 18. This gold ’63 Chev Impala looked the goods in Hoosier-shod white rims, but it was a little rough off the line as Jason Winnen and his brother Damien came to terms with racing a four-speed Jerico manual. The boys have slotted in a Chevrolet Performance ZZ502 cratey up front, and despite the gearbox issues, the Impala was good for a 7.54@93mph qualifier 19. Damien Kemp and his much-loved Funderbolt gasser wowed the crowd with long burnouts, and mid five-second passes. Engine is a 44oci SBF, with 8/71 Hampton blower and Hilborn four port injection 20. We featured Speed’s stunning 50s-style T-bucket back in SM Hot Rod 2006, and it’s just become a dedicated straight-line racer. Up front is a bored 283ci Chev, bolted to a Powerglide, with a 9in packing a mini-spool out back 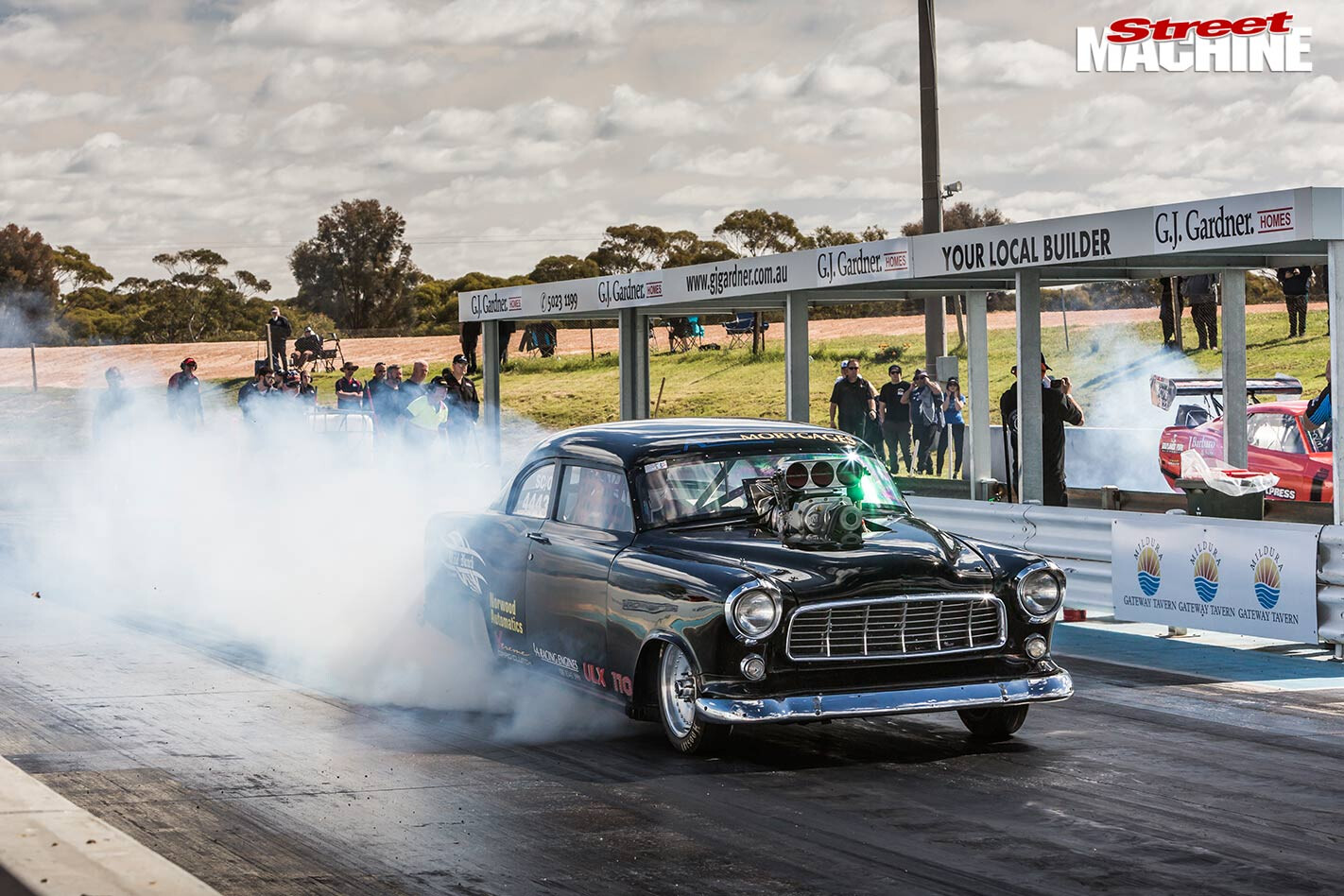 21. Getting to see Aussie-bodied cars atop crazy drag set-ups is a good reason to get along to the Nostalgias. Dale Clothier’s sweet black FE was one example, oozing toughness with a stonker blown 510ci Chev. It ran a qualifier of 6.4@100mph 22. Kieley O’Connell used to share this HB Torry with her brother Pete, but he’s started piloting a 302ci Windsor-powered FED, so she’s taken the reigns. Controversially, it’s powered by a Ford 250ci crossflow. Kieley ran 7.8@84mph in qualifying, then won two of her three races 23. “My replica Thunderbolt race car failed at Willowbank, so I bought this instead,” said Hayden Ivers of his silver Ford Sprint. He raced the stroked 347ci Windsor backed with C4 auto and an LSD to an 8.92@84mph qualifier. Given the rare ’63 Sprints were the basis for the ’64½ Mustangs, little has to be done to make ’em race-ready