Palmyra ticks all the boxes whether it's racing or relaxing

DRAG racing is a numbers game. But the post-race statistics didn’t even come close to telling the whole story of the Pro Street meeting at Palmyra Raceway in Mackay, north Queensland.

First up it’s an awesome place, with arguably the best regional track in Australia, killer weather and an atmosphere like a family reunion — minus the arguments.

More than 80 entrants rolled up from as far afield as Melbourne to race in the widest range of Pro Street classes ever assembled in Oz. The highlight of the event was the official launch of the 10.5 Outlaw class, and a couple of the country’s biggest hitters were keen to run some numbers.

Another addition to the usual Australian Pro Street Association (APSA) classes was the very popular Radial Tyre class, and there was plenty of competition on hand. 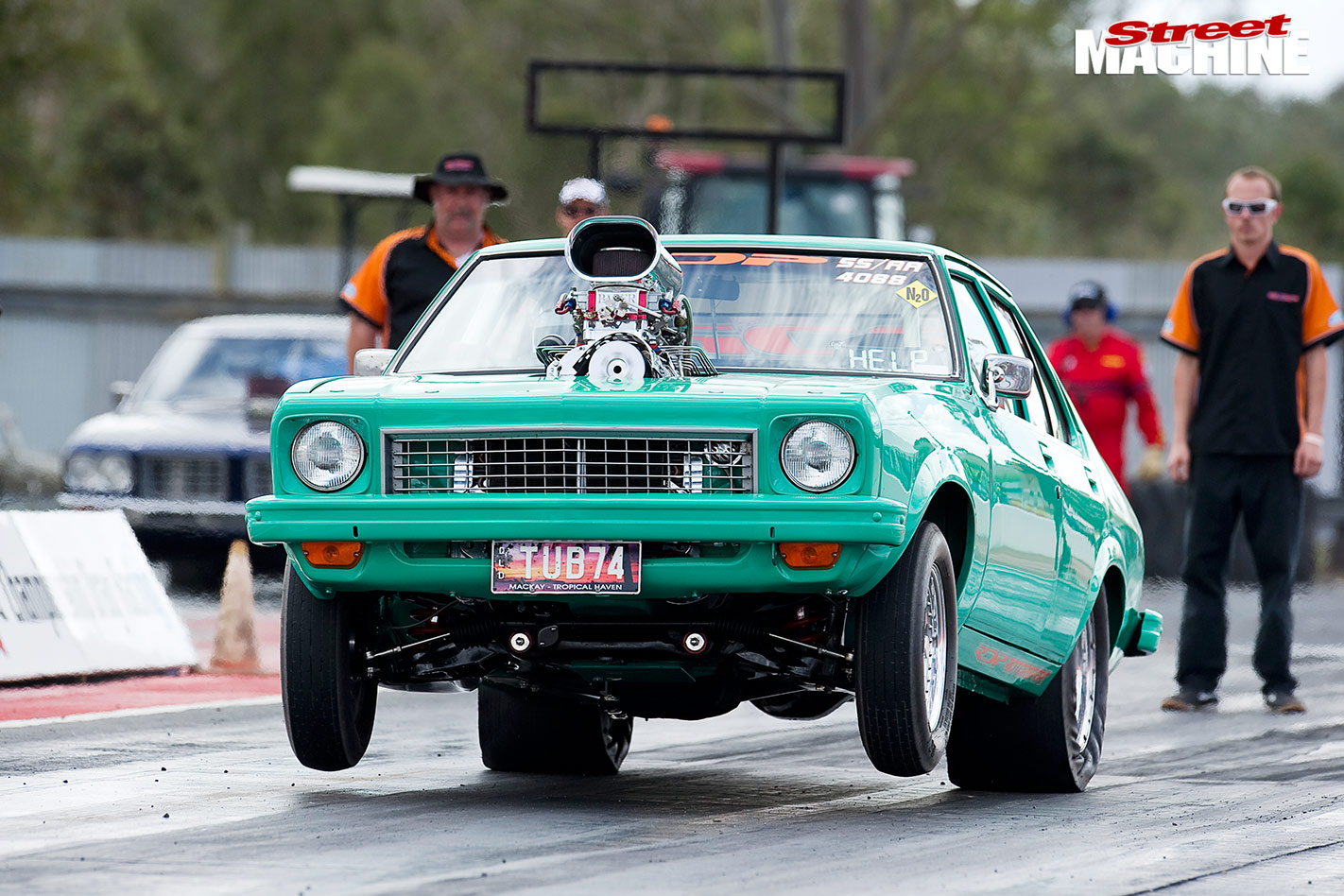 The Friday night test ’n’ tune session was a little quiet in the APSA camp, after the boys got a little messy on the orange whips the previous day. But by Saturday it was action stations once again and Deno Brijeski made the first 10.5 competition pass down the racetrack in Australia in his stunning Pro Comp-sponsored and BAE Hemi-powered Camaro. With the car still set up to run in Top Doorslammer, Deno had too much power dialled in and blew the tyres off it every time he got on the noise.

Meanwhile, Frank Mamone had spent the previous night repairing the reverser in his Lenco transmission — big thanks to local Paul Shackleton for supplying the parts and know-how to get the car back together. But that was only the start of a bad weekend for Frank and his 1967 Chevy Nova. At the track, the crew found a broken rocker and had to pull the sump off the engine to find all the bits. With the mill back together, Frank’s shakedown pass on Friday afternoon broke the reverser planetary. That night he made another pass and blew the PSI supercharger off the engine, which was caused by a dropped valve on the same cylinder that’d had the broken rocker. Unable to repair the valveseat, Frank was sidelined for the remainder of the meeting. 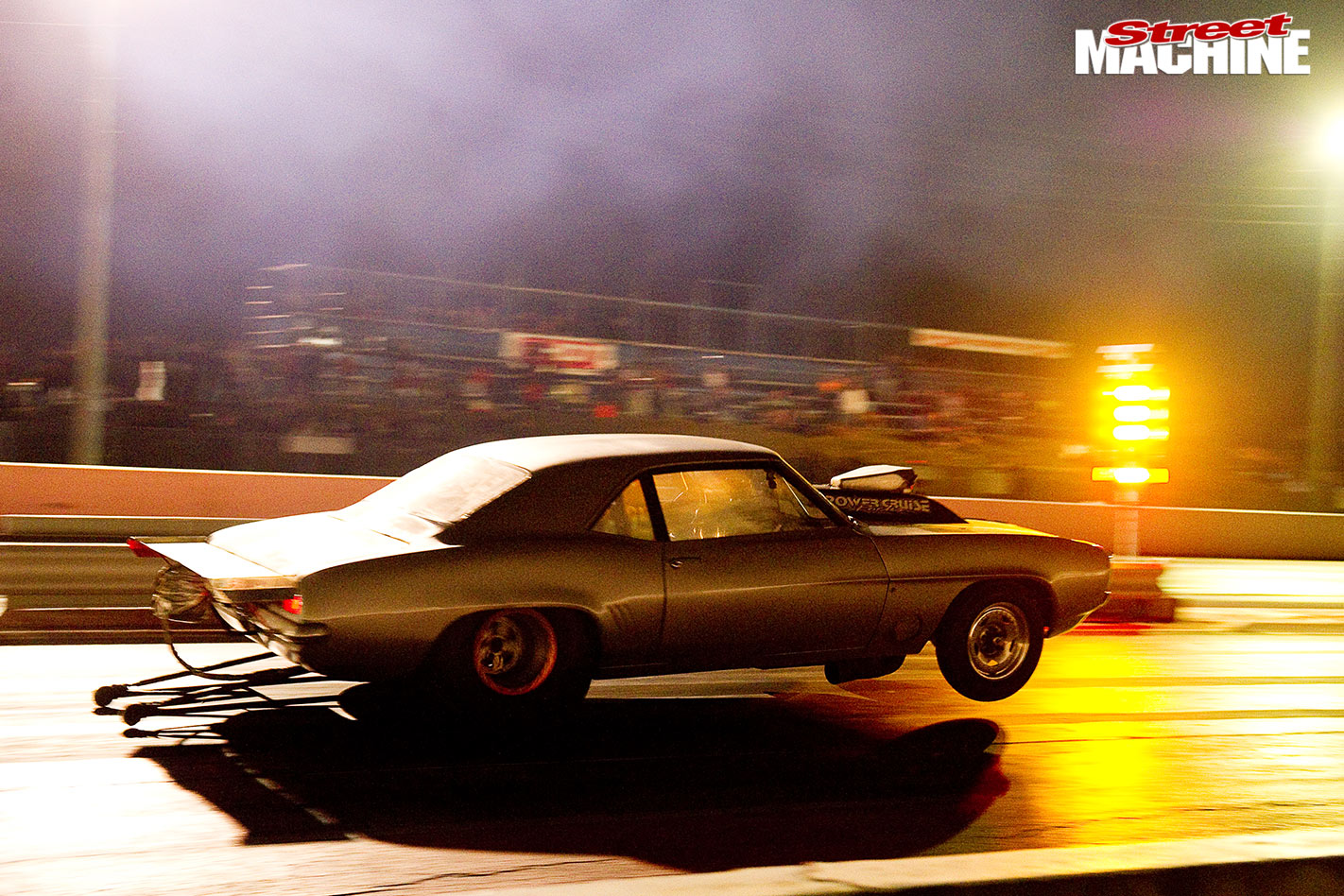 For street cars, Mackay is right up there with the best of them. Never have I seen so many street-driven nine and 10-second cars — and they were mostly Fords. Qualifying saw some standout performances from the street car ranks and even putting my biases aside, the car of meet would have to be Darren McGahan’s wheel-standing Plymouth Barracuda (pages 72-73).

“The car was originally a 440, four-speed, Dana-rear car,” Darren said. “I didn’t want any of that stuff so I bought it as a roller, with a Valiant diff under it, from a guy in Brisbane. It’s now a small-block car with a 727 trans and nine-inch rear.”

Through the mufflers and in street trim other than tyres it ran consistent 9.70s at 137mph with its bumper dragging.

Other impressive streeters included Ian McGowan’s XW Falcon that gets driven to the track and runs into the mid-10s. In qualifying, the 174 Weiand-supercharged 351 Clevo struggled to plant all 750 ponies to the track. 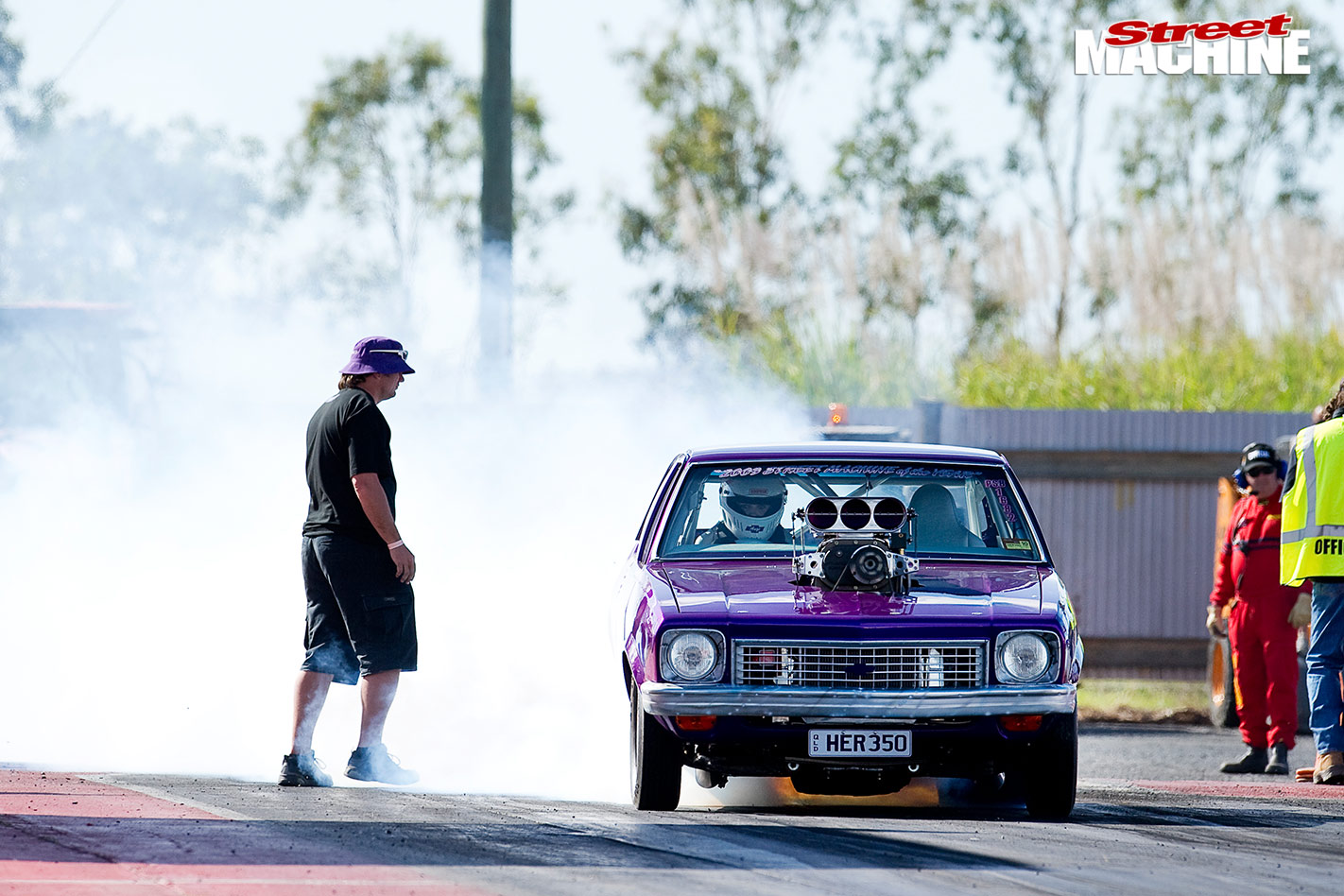 “We’ve been running around the 10.60s fairly consistently,” Ian said. “Our biggest issue at the moment is traction so we’re trying different ways of getting it out of the hole.”

Getting out of the hole could have been a disaster for the current Street Machine Of The Year title holder, Angela Dow, who broke a rose joint in the rear of her blown and injected small-block Chev-powered LX Torana after a wild burnout. Luckily, startline spectators noticed the rear-end swaying as she brought the car into stage on her second pass of the meeting — she ran a stout 7.90 earlier in the day — and quickly shut her down. She repaired the car and returned to the track but torched a head gasket on her next pass.

The Radial Tyre class threw out a number of super-quick passes. All contenders struggled with traction on the 275 tyres and Tony ‘Nipples’ Wilson in the nitrous-fed 430ci LJ Torana couldn’t improve on his previous best of 8.60s. 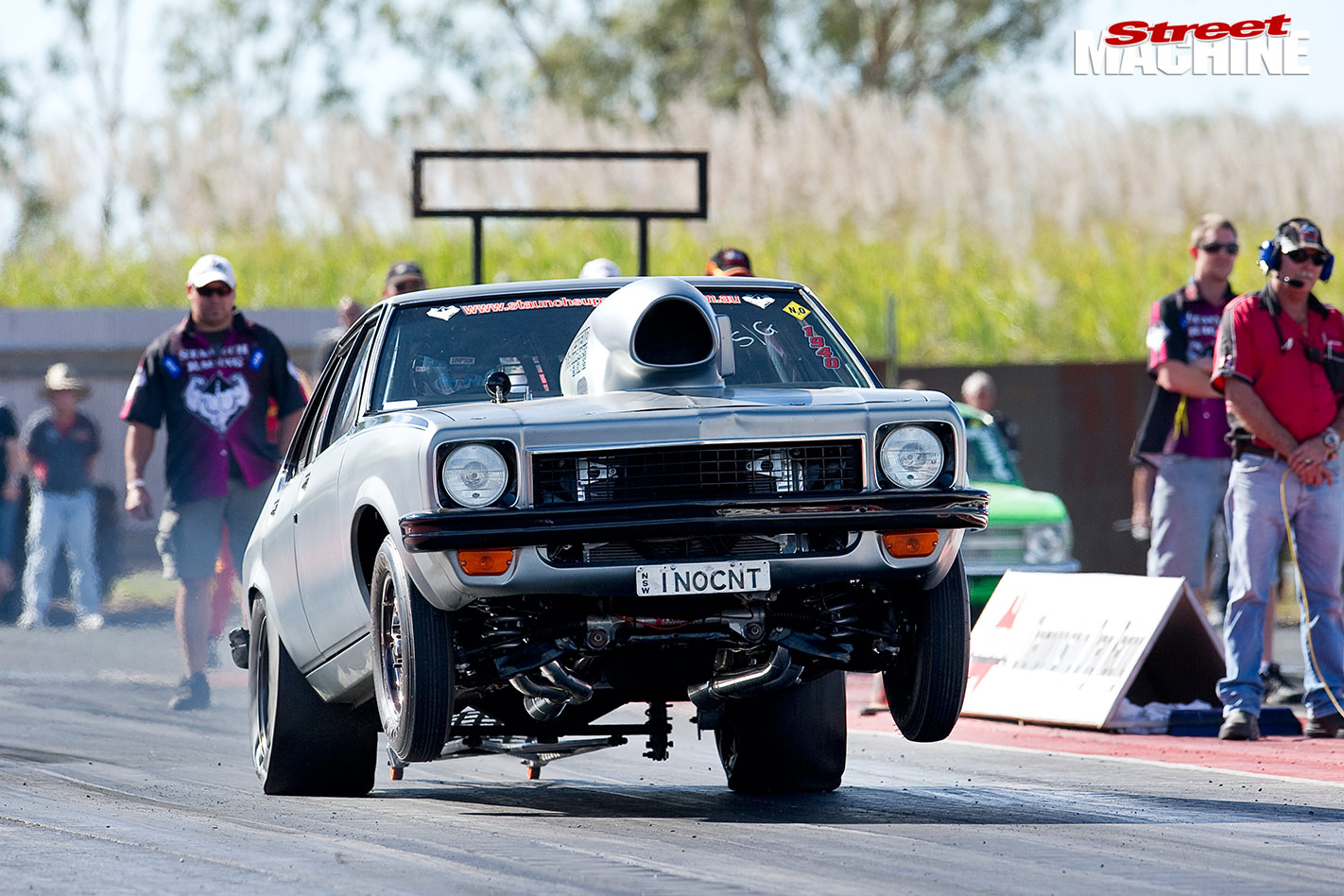 But it was the big bangers that the crowd came to see, and Simon Kryger and Johnny Wilson turned on plenty of action in the Modified Street Blown ranks.

Simon’s been chasing an engine stumble at the 60-foot mark in his nitrous-fed LH for a year. It followed him to Palmyra and relegated him to 8.0s throughout testing and the first round, despite running around 180mph each pass.

By contrast, Johnny couldn’t have had a better weekend; a number of 7.80s had his freshly re-powered Torana launching like a slot car and in the final qualifying round he managed a 7.59@185.43mph against Kryger’s 8.09@179.30mph. 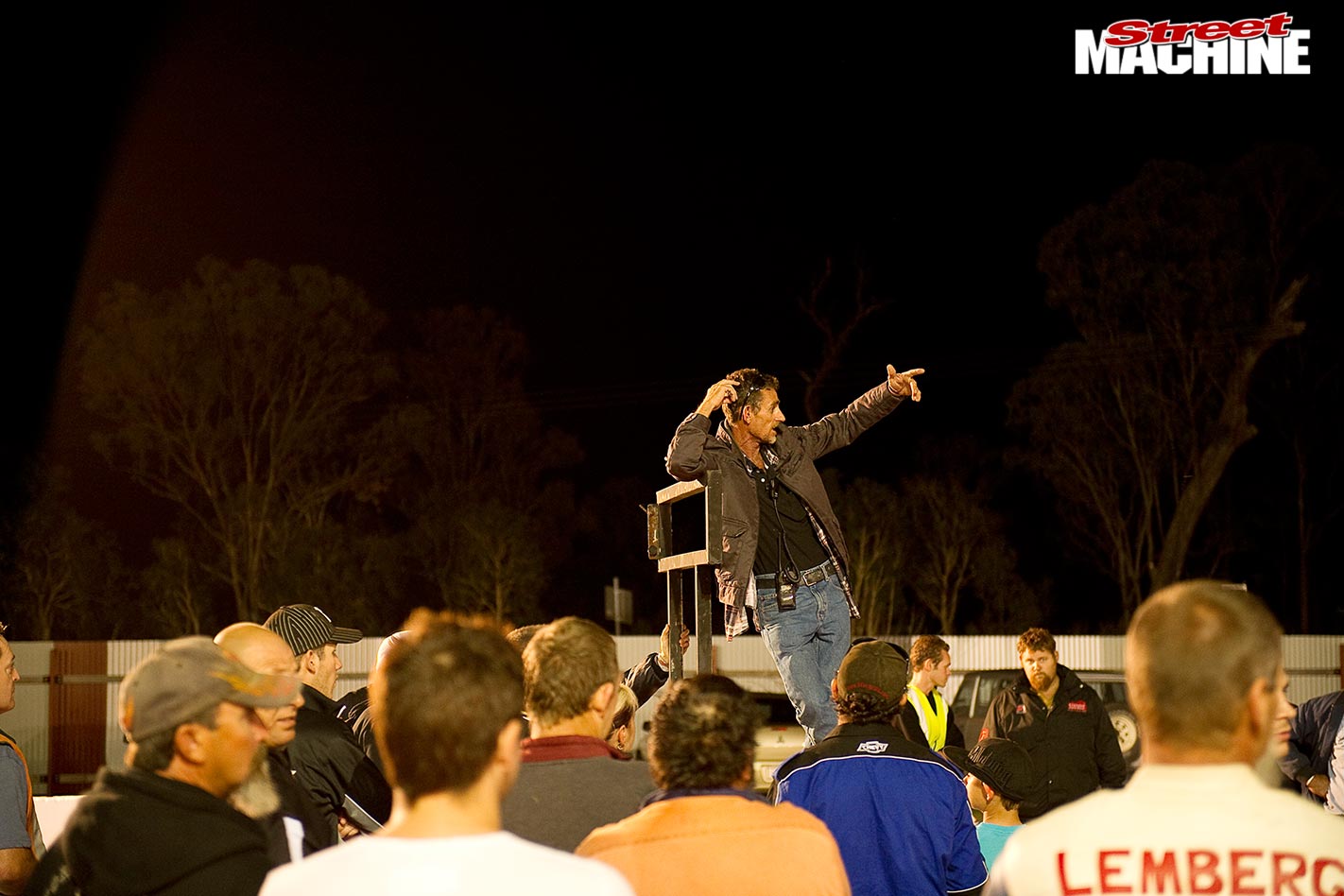 The event was looking like the perfect opportunity for Johnny to lock horns with Craig Hewitt, whose Walkinshaw Pro Streeter had rattled off a number of 7.60s at 188mph and earlier that day had run a 7.51@190mph.

And then there was Mick ‘Bluey’ Arnold. He had a new engine combination in the 1969 Camaro he shares with Michael ‘Gup’ Gilbert and after running the car on a safe tune early in qualifying, added some timing to get into the mid-sevens.

Sadly for the racing, the first round of qualifying was constantly interrupted, with seven out of 10 passes producing coolant and oil spills. After almost three hours of clean-ups and with dew starting to settle, there was no chance of getting the surface back into shape, so to allow racers to let off steam and appease what had been a big crowd, officials ran the cars down one lane, though even that was dangerously loose.

In true Modified Street form Queenslander Stuart Henry produced one of his best passes of the weekend in the dodgy conditions, after struggling with traction all day in his turbocharged, small-block Ford-powered Capri. With every other car getting badly out of shape mid-track, Stuart rattled off an 8.20@178mph before officials pulled the pin on the meeting.

Afterwards, everyone kicked back with a coldie and soaked up the amazing energy the event had created. Maybe the racing didn’t go to plan this time but if you wanna get away with your car, your missus and your mates, you couldn’t find a better place. The nightlife is amazing too — but that’s another story. 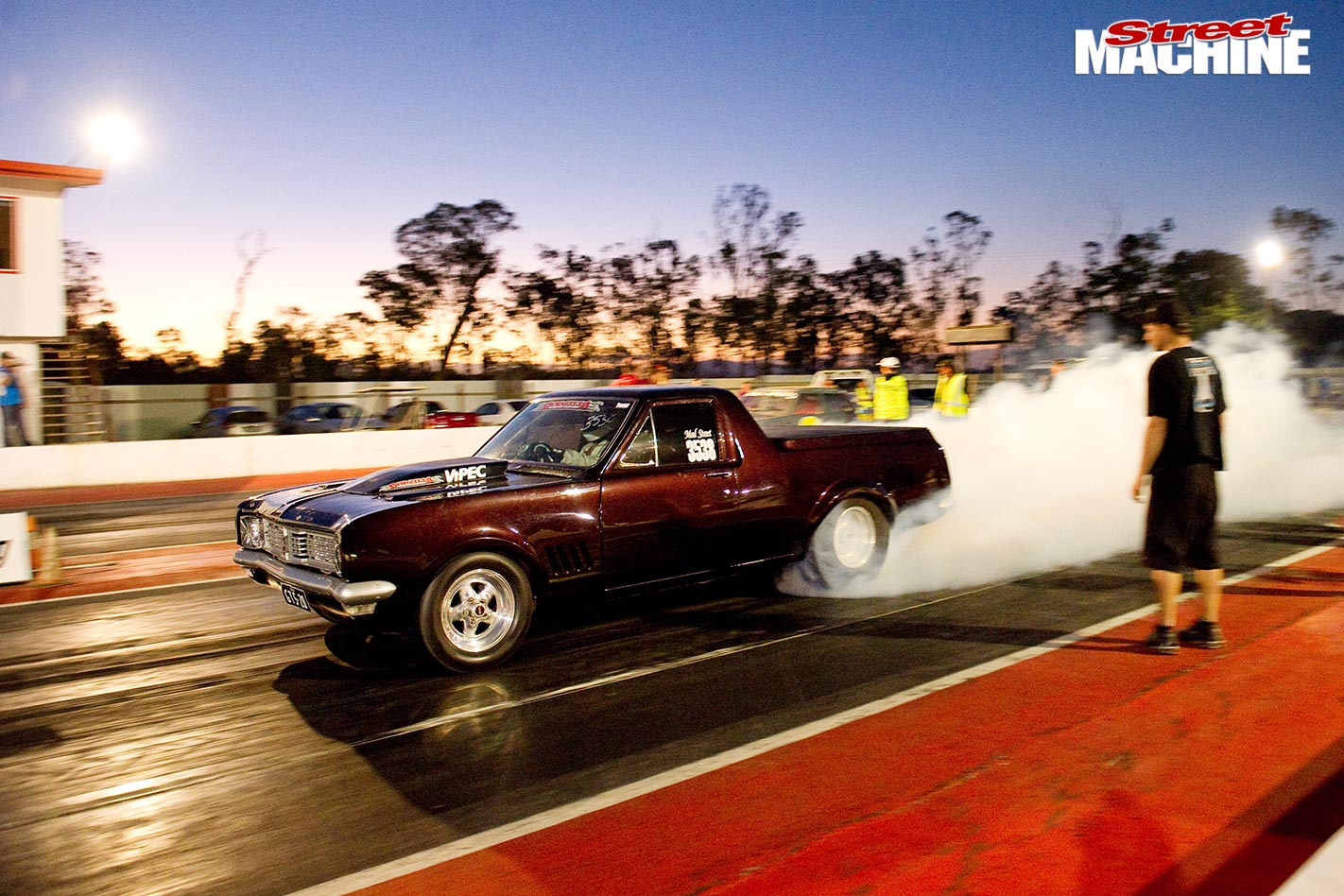 1. The new turbo small-block combo in Mick Arnold’s ute broke the diff first pass and once fixed, it struggled with traction all weekend. 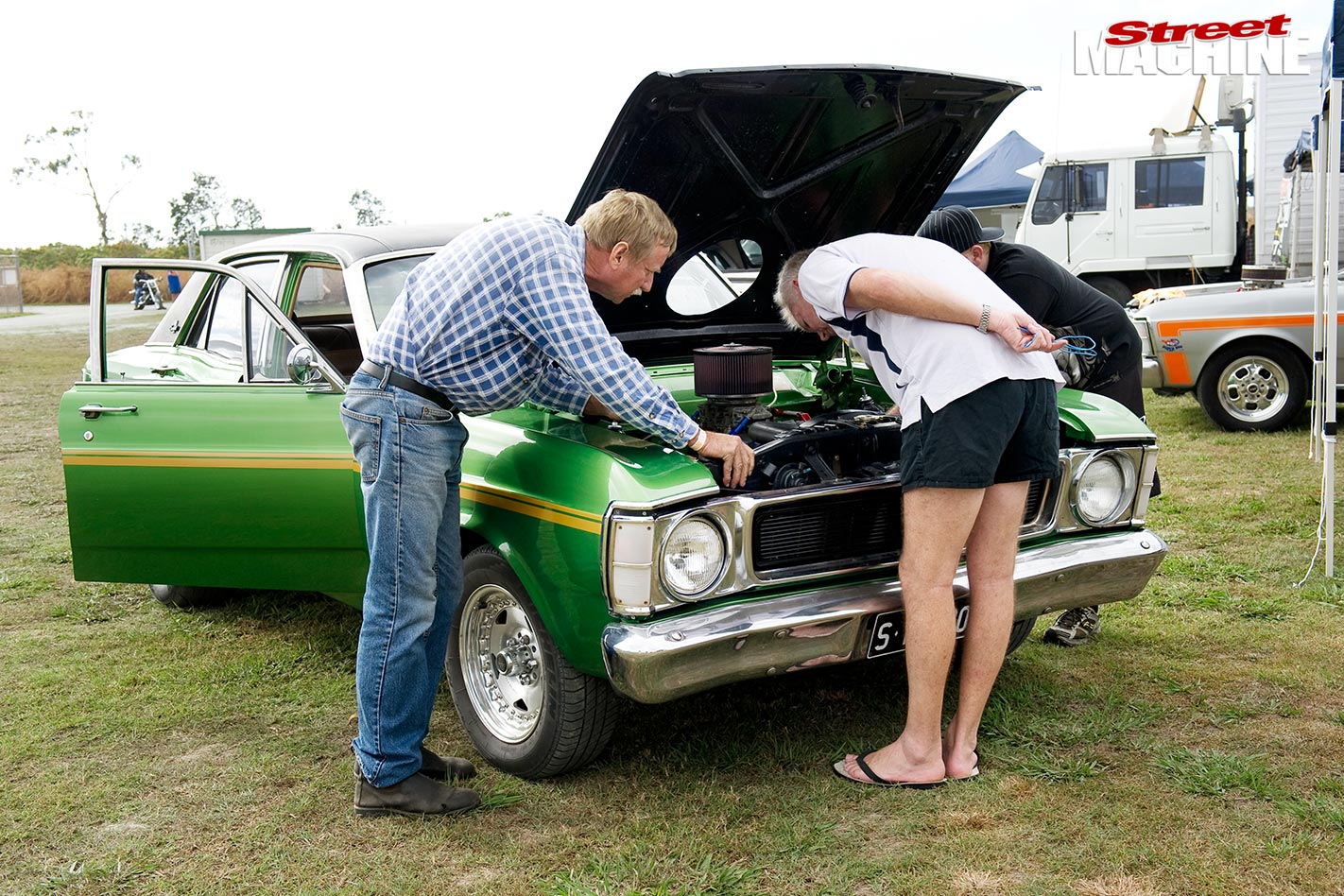 2. Luke Murray’s sweet XW streeter, built and driven by local Stuart Fenner, was running 12.0s all day until the 337ci Windsor popped a welsh plug during a burnout. 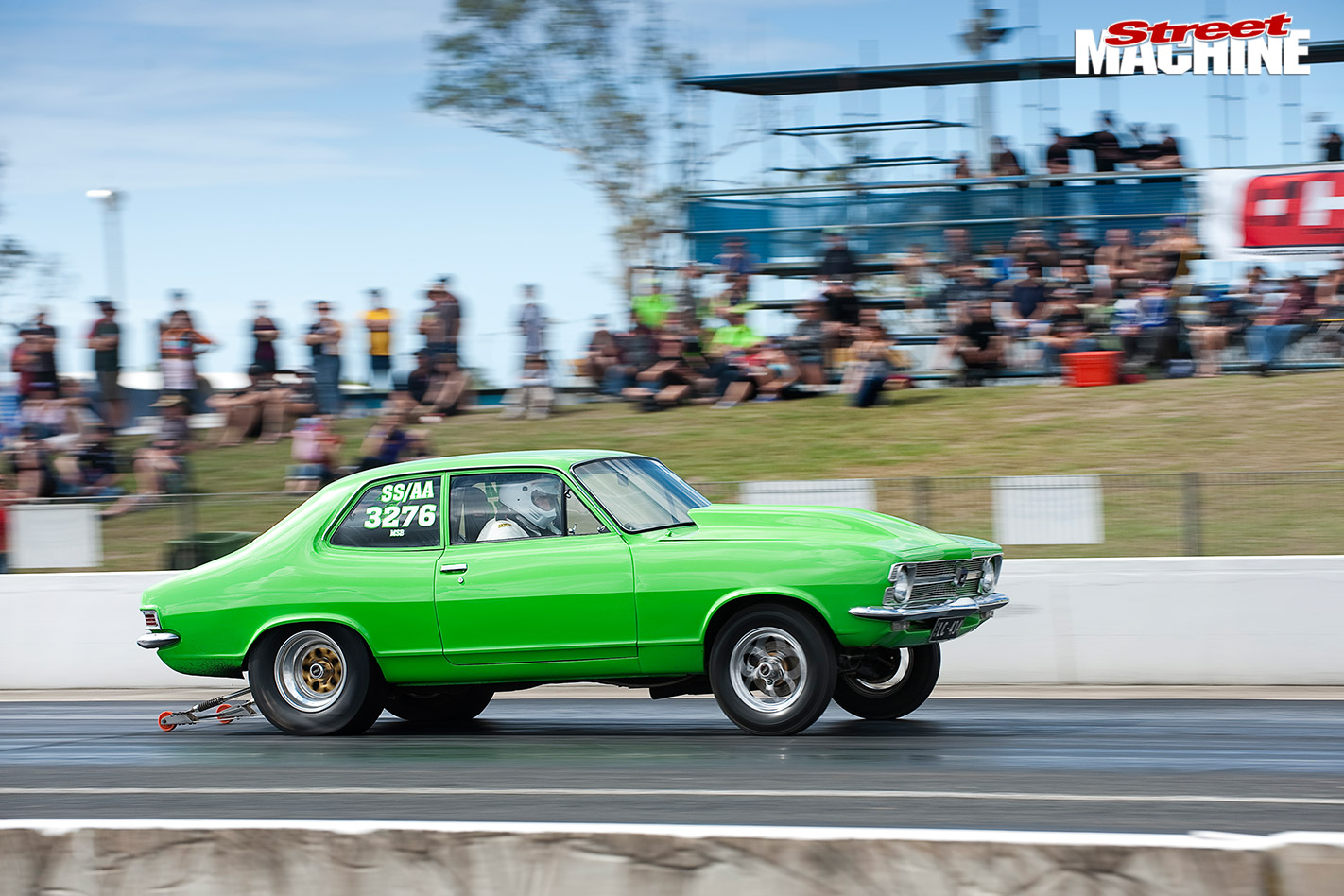 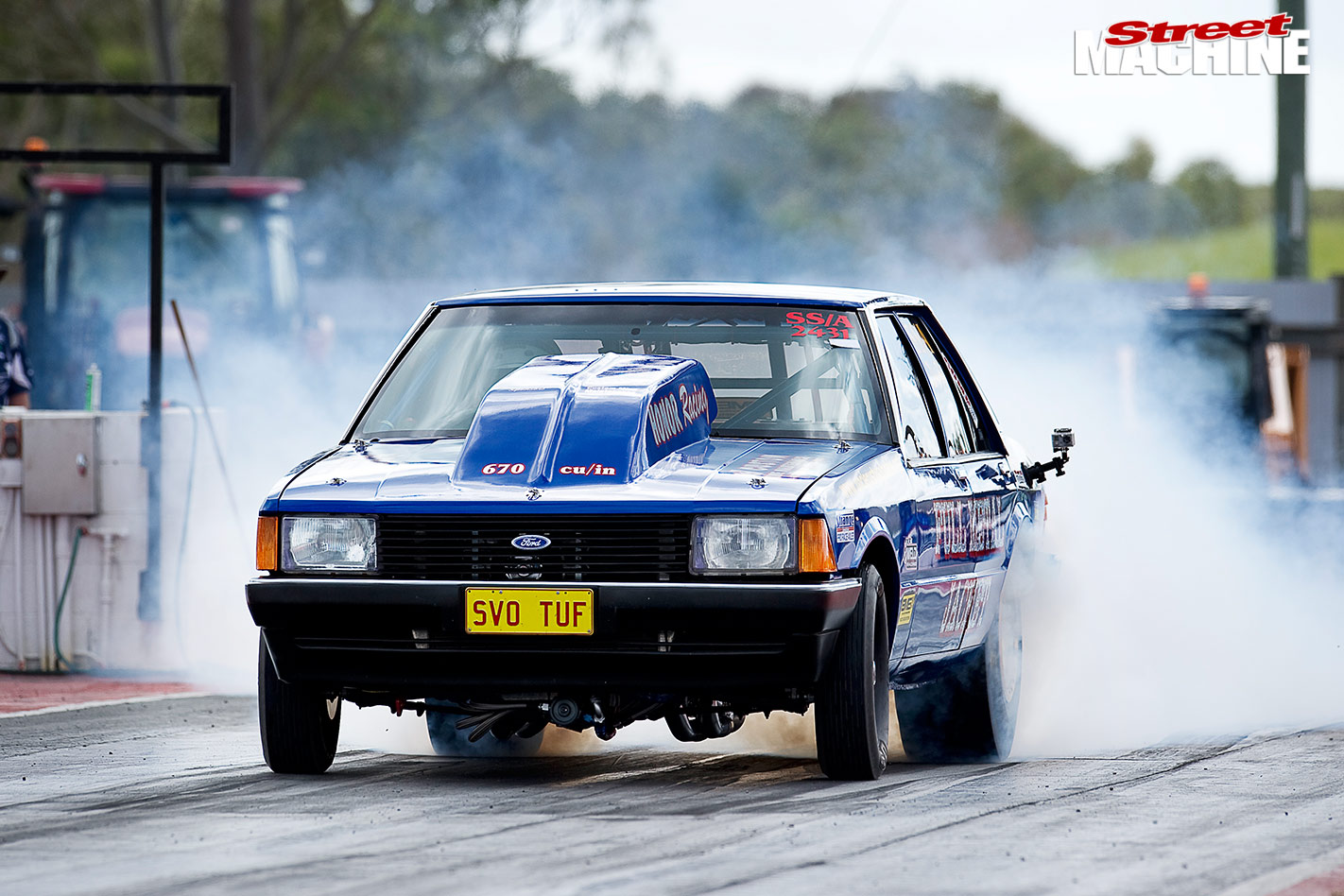 4. Fabian Huff’s genuine ESP is a tough True Streeter, running a best of 10.87sec thanks to a 383 Clevo with 4V heads. Fabian got seven passes in before the meeting was brought to a halt. 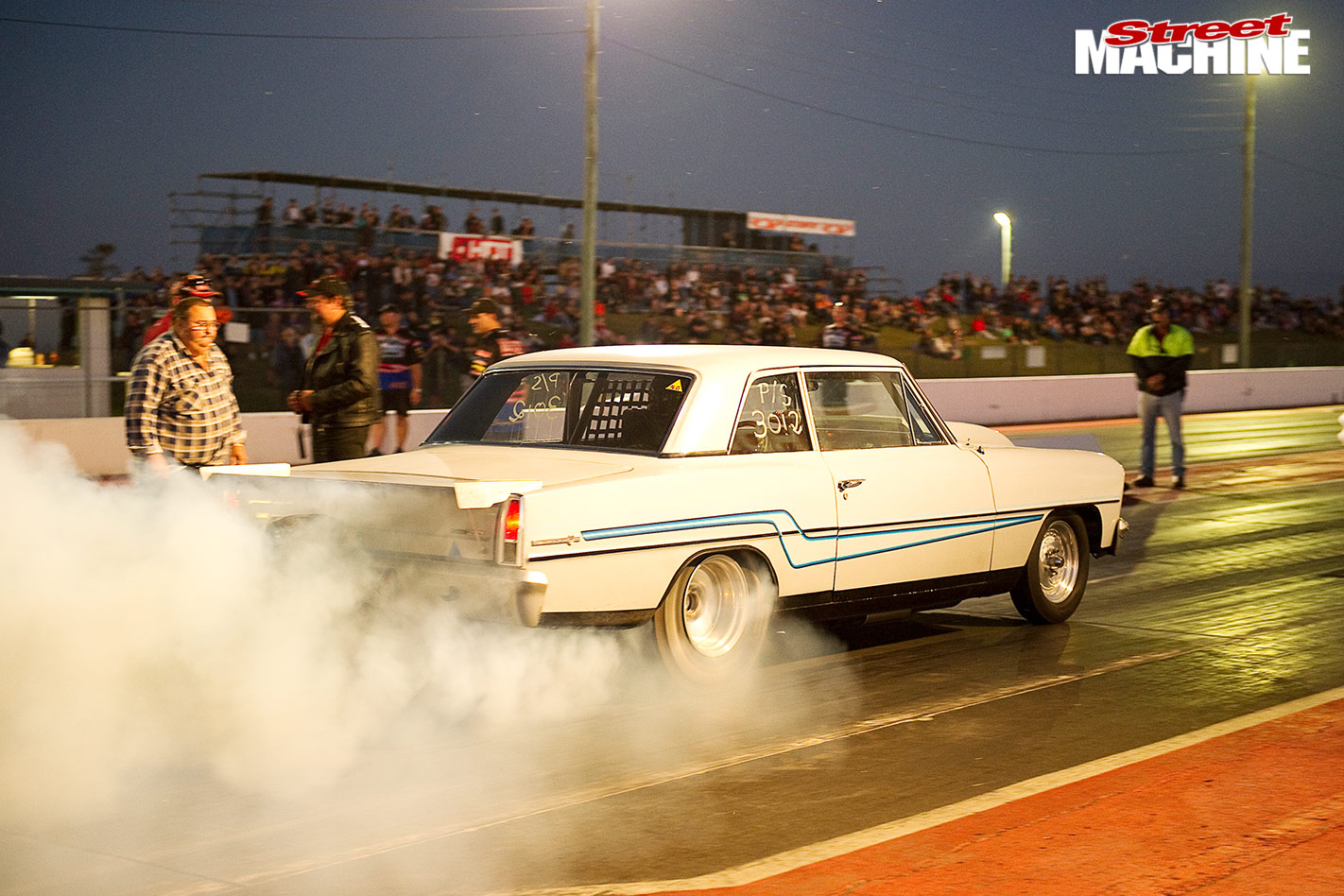 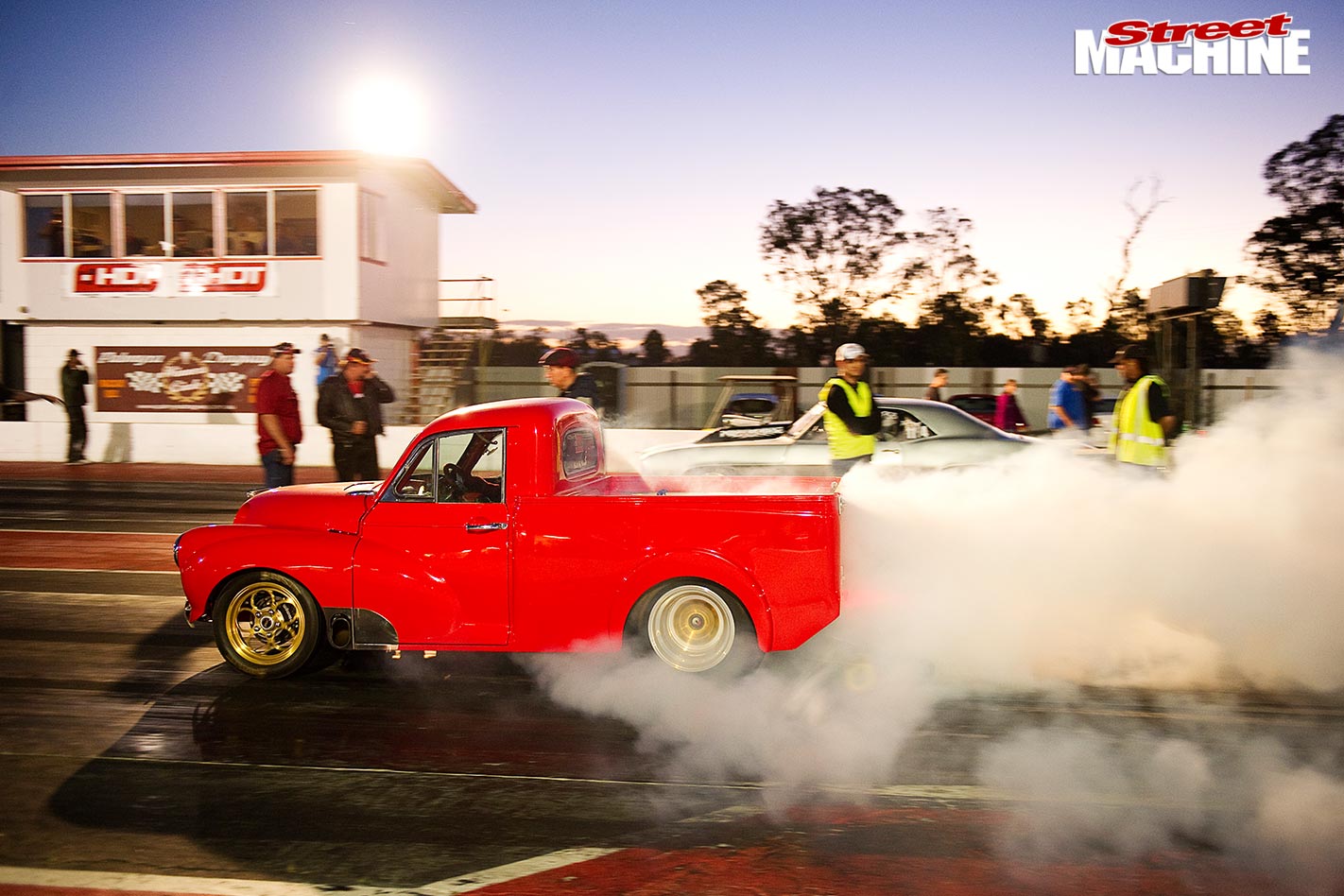 6. This tough Morris ute is owned by Brett Morgan and runs a turbocharged 13B rotary. 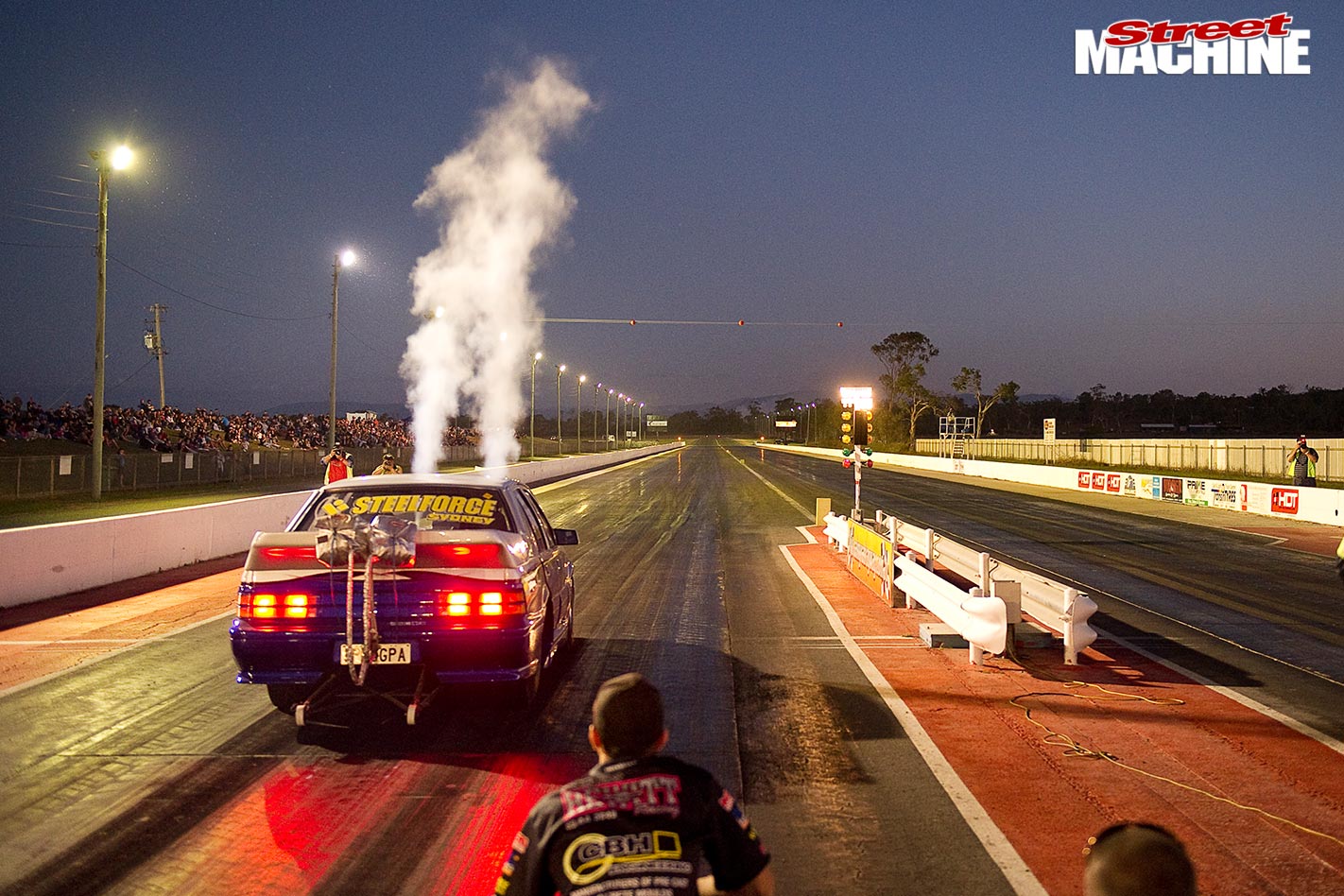 7. Craig Hewitt’s VL ran as quick as 7.51@190mph and was looking forward to a grudge race with Johnny Wilson’s LX but track conditions put paid to that. Craig went quicker again — 7.41 — at the Top Sportsman Shootout at Sydney Dragway a couple of weeks later. 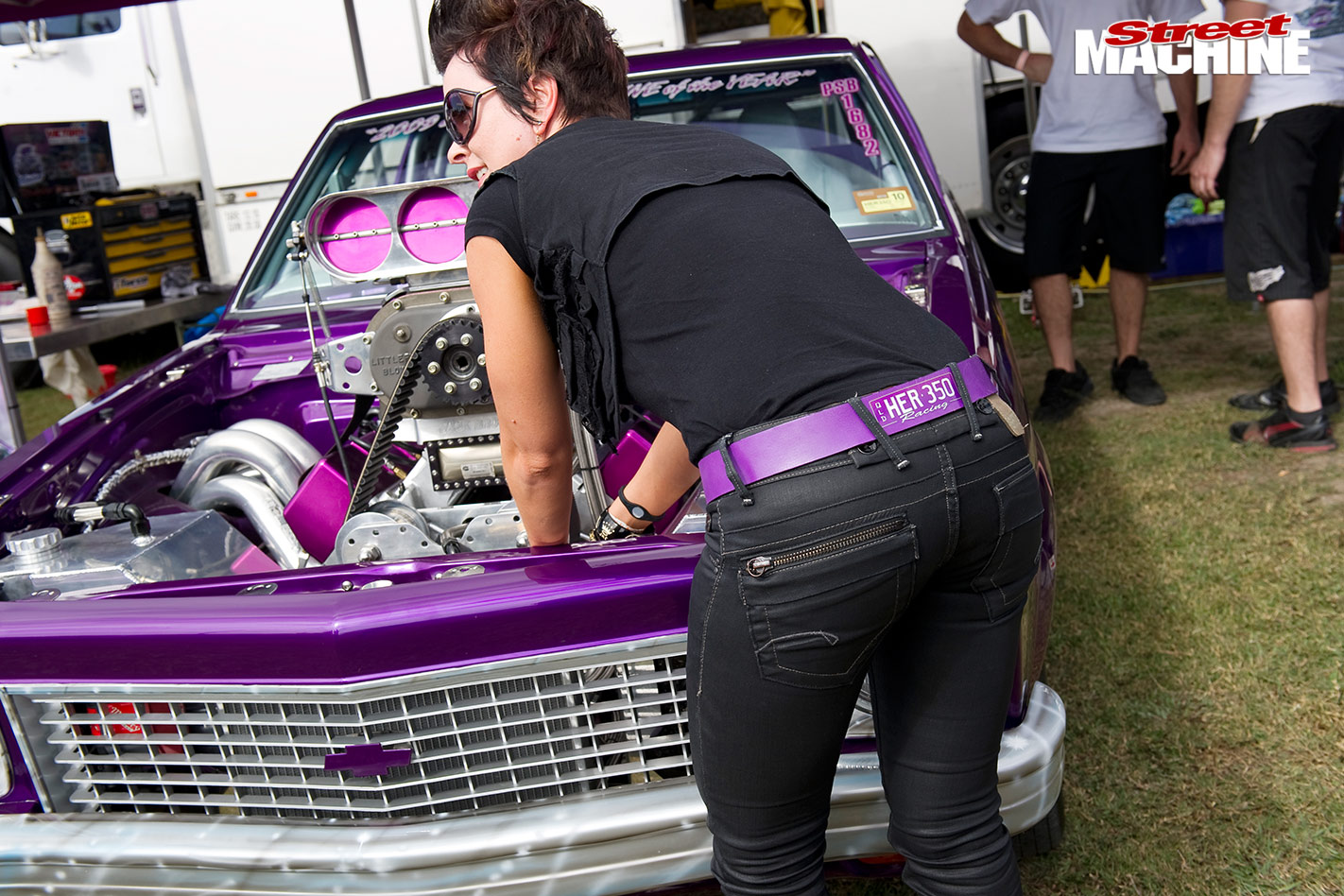 8. Angela Dow had a close call after breaking a rose joint in the rear of her blown LX Torana after a wild burnout. Luckily, officials noticed the rear-end swaying as she brought the car into stage and she was shut down. Earlier in the day, she ran a stout 7.900sec pass. 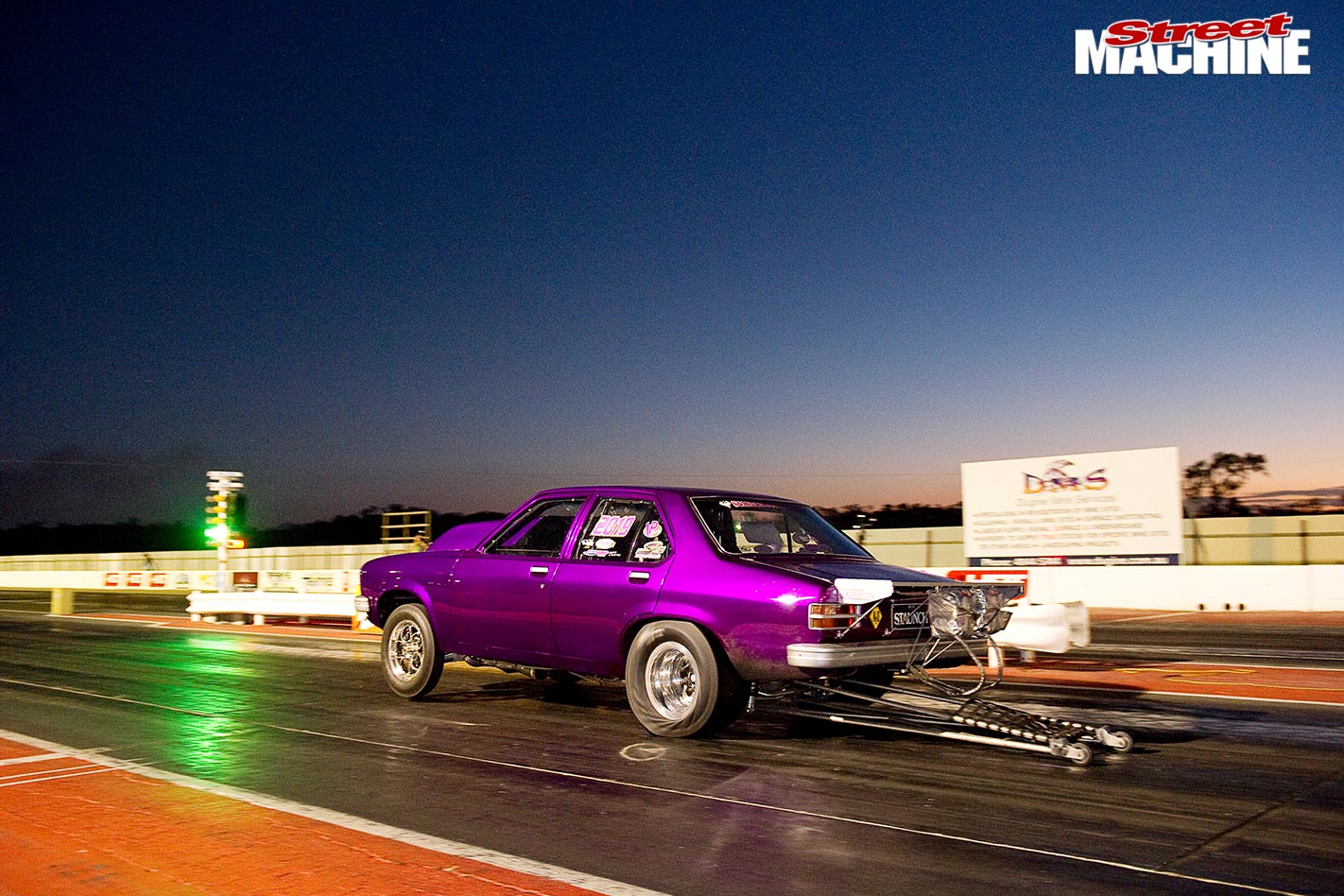 9. Johnny Wilson’s LX ran like a slotcar, as usual. Like Hewitt he went quicker again in Sydney, with a new PB of 7.54sec. 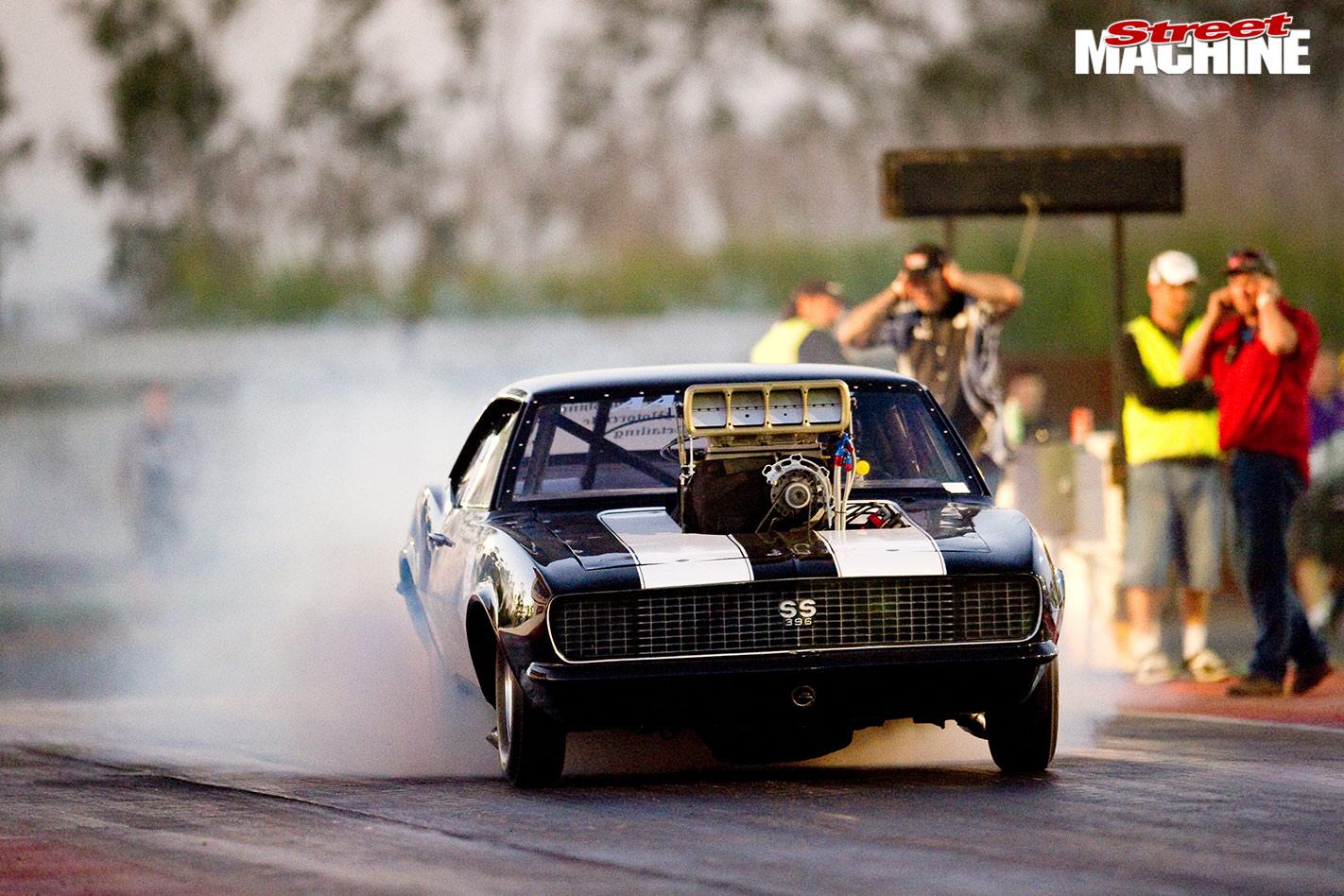 10. Paul Anderson’s blown BBC Camaro was a welcome addition to the 10.5 class and has run into the 6.90s down the quarter. 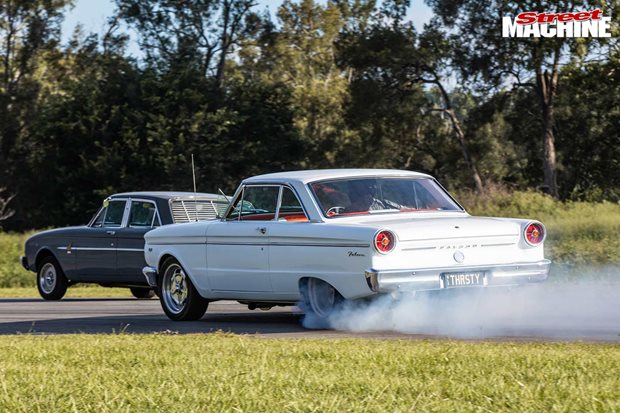 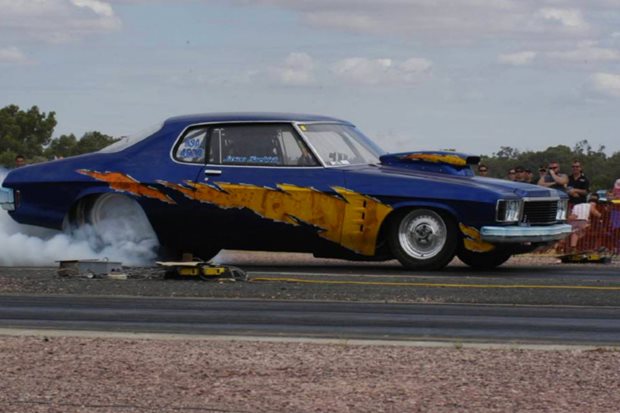 New drag strip for the Riverina

One of the great heartlands of street machining could soon have its own dedicated drag strip, at Leeton, NSW