THE long weekend in March saw a horsepower invasion take over the city of Albany, the normally peaceful community on the Southern Ocean about five hours south of Perth.

Yep, the Motul Racewars crew had rolled into town, but you won’t hear any complaints from the locals. In fact, Albany promotes the event as one of its Amazing Albany tourist attractions. It’s pretty obvious by attending the Sunday morning Cars & Coffee event down at the marina that there’s a solid car scene in this city of just over 30,000 people.

Rolling up to the event on Saturday, it appeared that around 10,000 of those people were at Albany Airport watching the competitors familiarise themselves with the track and conditions. Racewars starts off pretty cruisy with side-by-side roll-on 400m sprints, but that doesn’t mean people take it easy, with bragging rights up for grabs right from the start. This event is where some of the older stuff can shine: steel-bumper cars more at home on the drag strip with their short gears and big-cube V8 engines, more often than not helped along by a spray of nitrous. Many a turbo Japanese car and high-dollar Euro trash saw the tail-lights of Mark Grose’s HT Monaro or Brad Gardiner’s HT ute. 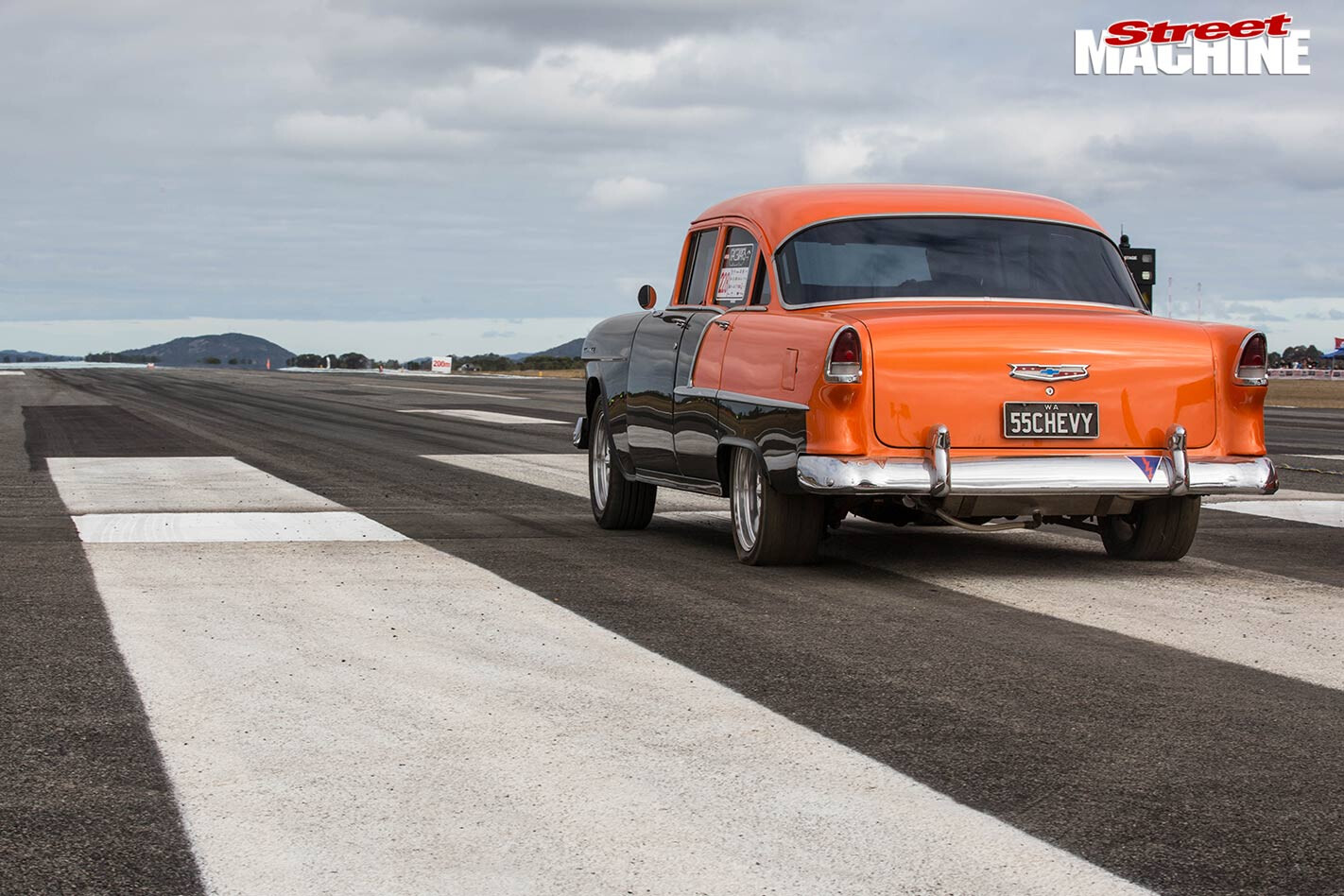 Hopefully one year someone will put some highway gears in an old classic and see how fast a 60s or 70s brick can actually go.

While the preferred weapon of choice still appears to an R30-something Skyline, it was turbocharged LS power that dominated the leaderboard at this year’s event, with six of the 11 cars topping 300km/h using the boosted V8 combo. The best on the day was Eddy Tassone in his VZ GTO, an absolute weapon of a machine that really is more at home on the quarter-mile. His 334.93km/h run was almost 10km/h faster than last year’s winner. 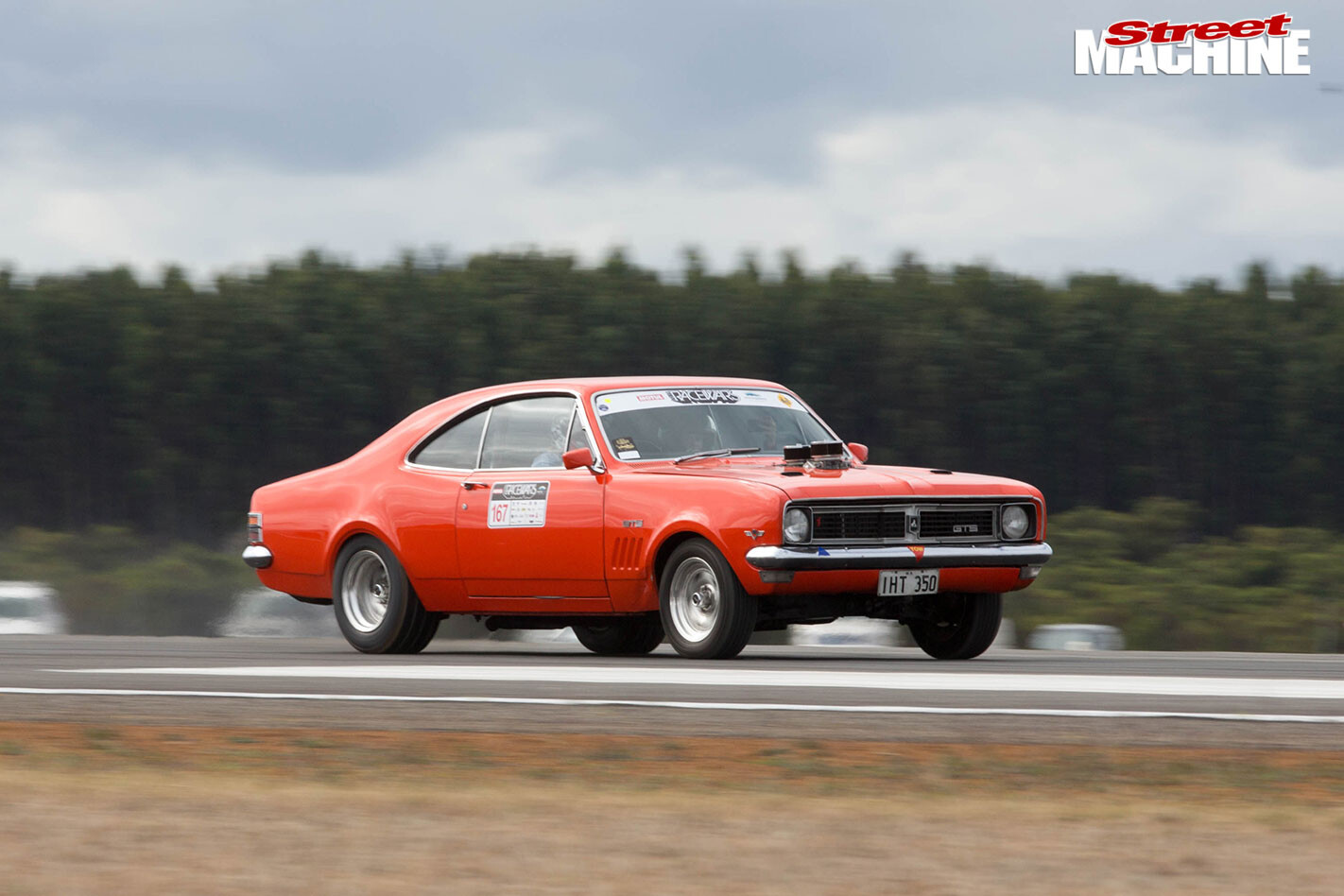 Peter Gray’s R33 Skyline is still a force to be reckoned with, finishing second but almost 10km/h slower than Tassone. Interestingly, his speed would have also earned him second place last year – by just 0.03km/h.

Jose Jardim came oh-so-close to cracking the 200mph barrier with his Supra – he likes old-school stuff too – clocking 321.20km/h, just 0.4mph off the mark. After an excursion into the dirt on his first run, he did well to gather up the car and himself to finish third overall.

It was also fantastic to see regular Racewars competitors Adam Monck and Royce Hall join the 300 Club after many years of trying. Adam has to be commended for taking a car that was designed to go sideways around a race track and manhandling it to behave itself in a straight line at over 300km/h. Royce’s achievement is that he’s taken his regular road car, a four-door 1989 Skyline, and developed it from over 260km/h at the inaugural Racewars event to a machine capable of over 300km/h using an H-pattern gearbox. 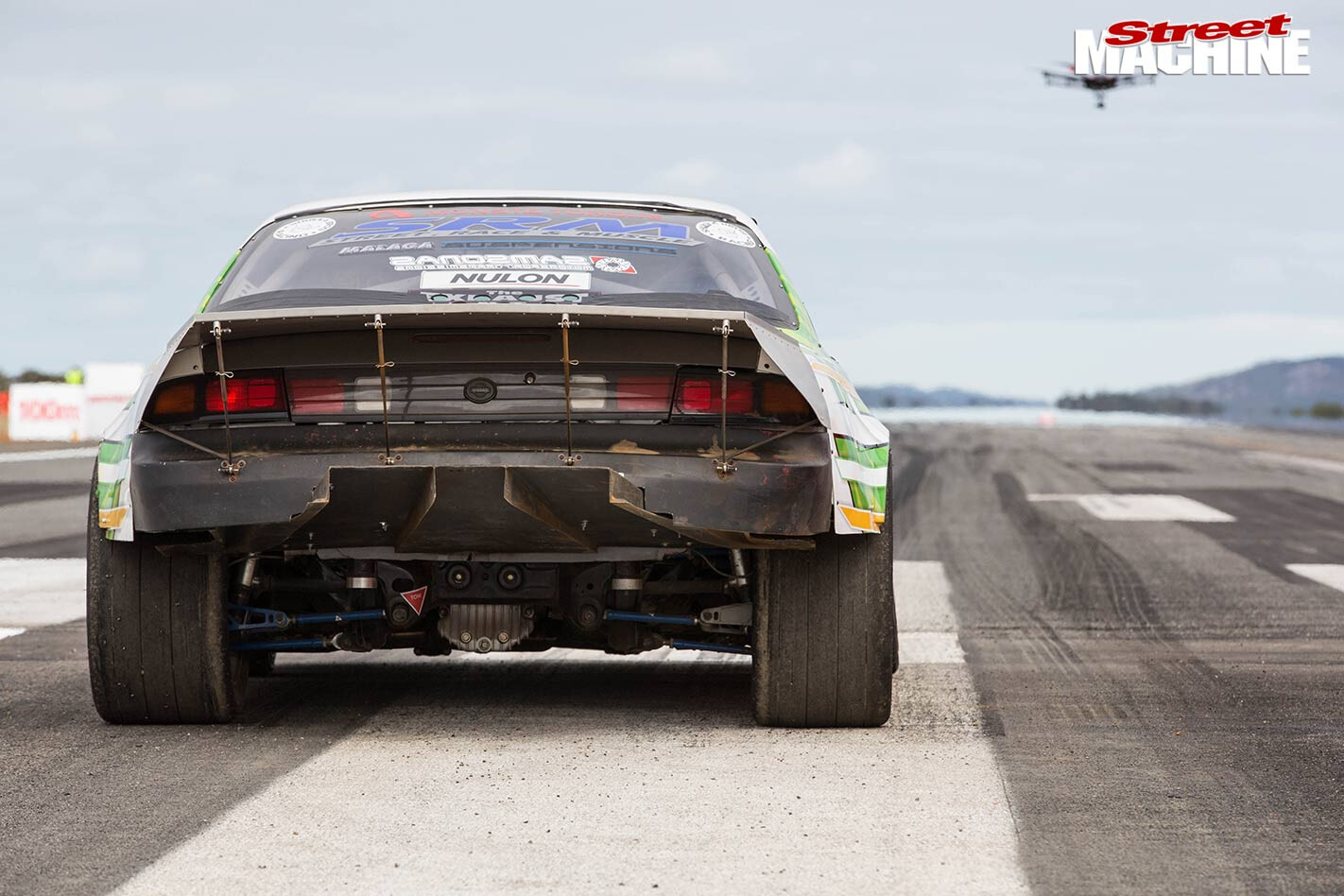 But spare a thought for Jacob Copeman-Mitchell, whose FG XR6 reeled off a mightily impressive 299.30km/h, just missing out on 300 Club membership. Keep in mind there was a 30km/h headwind on the day, so the car is clearly capable of cracking that magic number. The FG had a 930hp tune courtesy of Monsta Torque this year; maybe they’ll turn up the wick even more next year to make sure the job gets done.

Racewars 2018 was another very successful event, and is becoming a highlight on the calendar for top-speed racers – not just locally but nationwide. As I write this, we’re barely two weeks out of the event and people are already talking about improvements and upgrades for next year. Will we see the Aussie record tumble in 2019? I hope so, especially if we can get that wind to die down a touch! 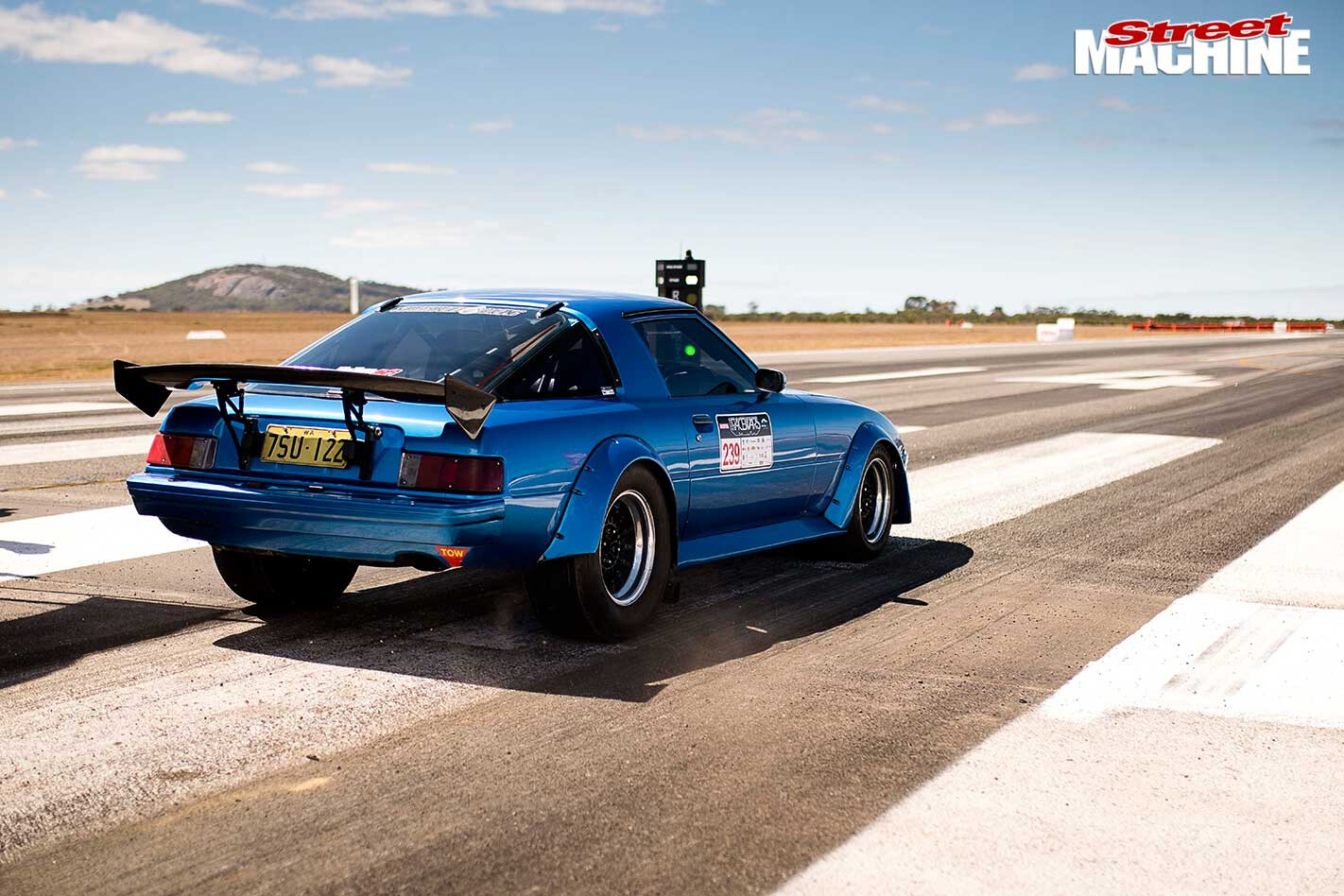 1. One of the best and most consistent performers of the weekend was Anthony Knight’s RX-7. It was deceptively fast, leaving the line with hardly any fuss and then rattling off several 300+ runs, with the best being 310.60km/h – but hang on a minute all you rotor fans, stop typing. There was no rice cooked during this event, as Anthony has swapped out the Wankel and gone for good ol’ twin-turbo LS power. Utilising a factory intake and mounting the turbos below the headlights, the flat bonnet doesn’t give the game away at all.

This is a car that Anthony has owned and raced for some 25 years, and it looks like it’s still got plenty of life left in it! 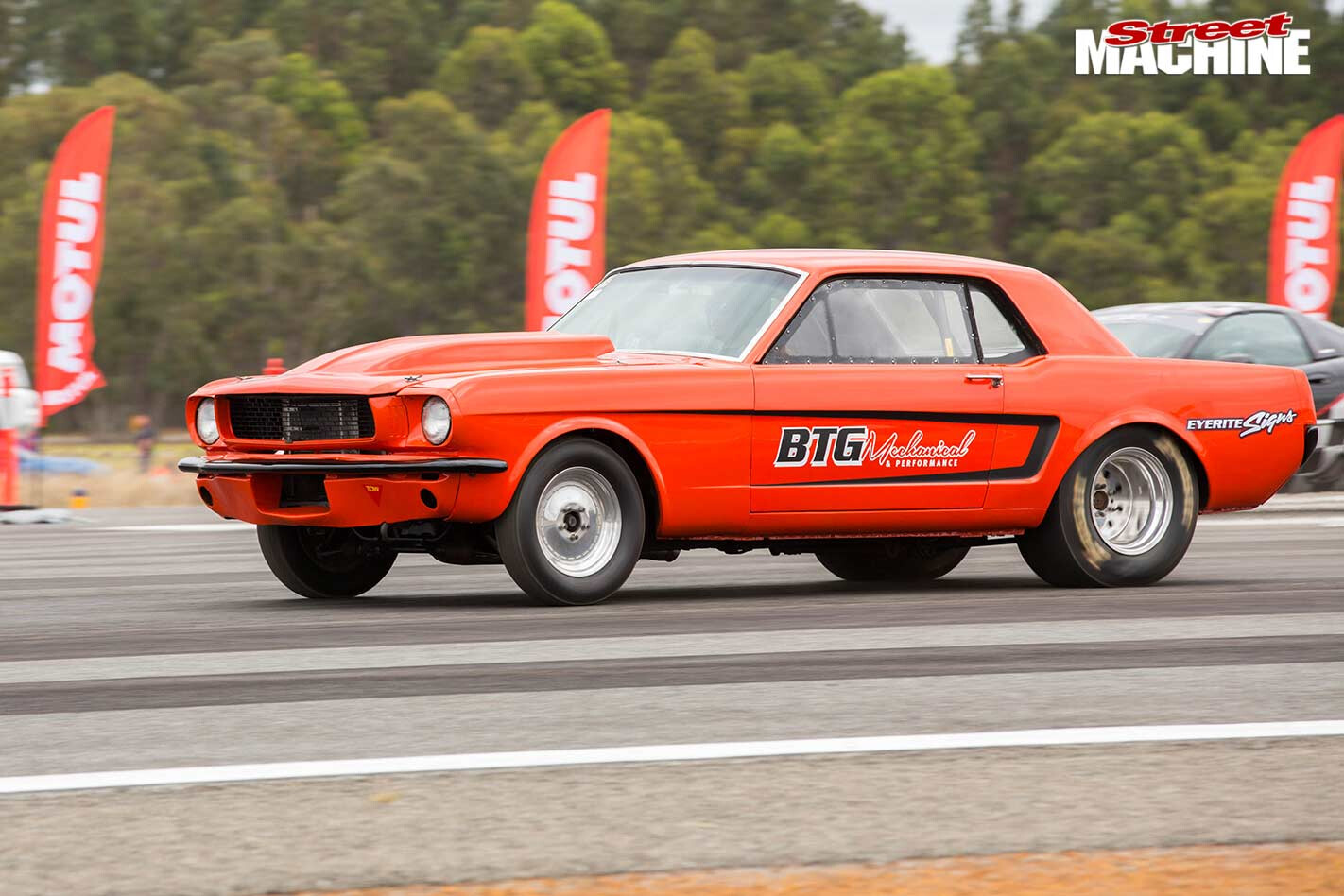 2. Brook Gunning won last year’s Cash Days with his XE Falcon, so he thought he’d step it up with this Mustang. It’s an old drag car that copped a fresh coat of bright orange paint and the Fontana engine that once powered Graham Kennedy’s Good, Bad & Ugly Capri. 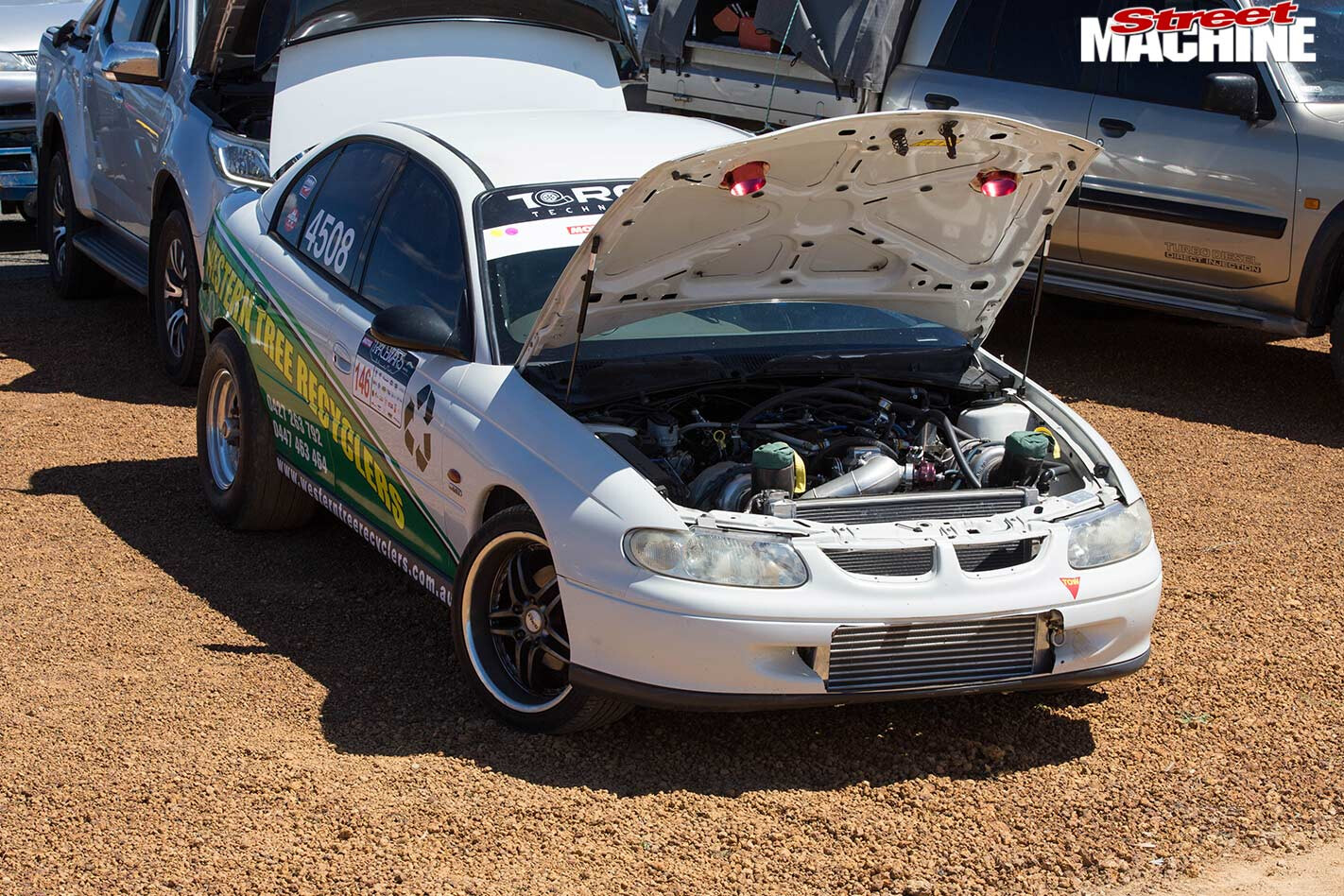 3. Ok, it may have taken three of them to do it, but the Christie family – father Ken and sons David and Greg – all busted through the 300km/h barrier at Racewars using Ken’s rather sedate-looking VT Commodore. Initially they were all racing different cars, but David blew up two Turbo 400 gearboxes – returning to Perth Saturday night to repair it – before blowing up the second gearbox on his first pass on Sunday. 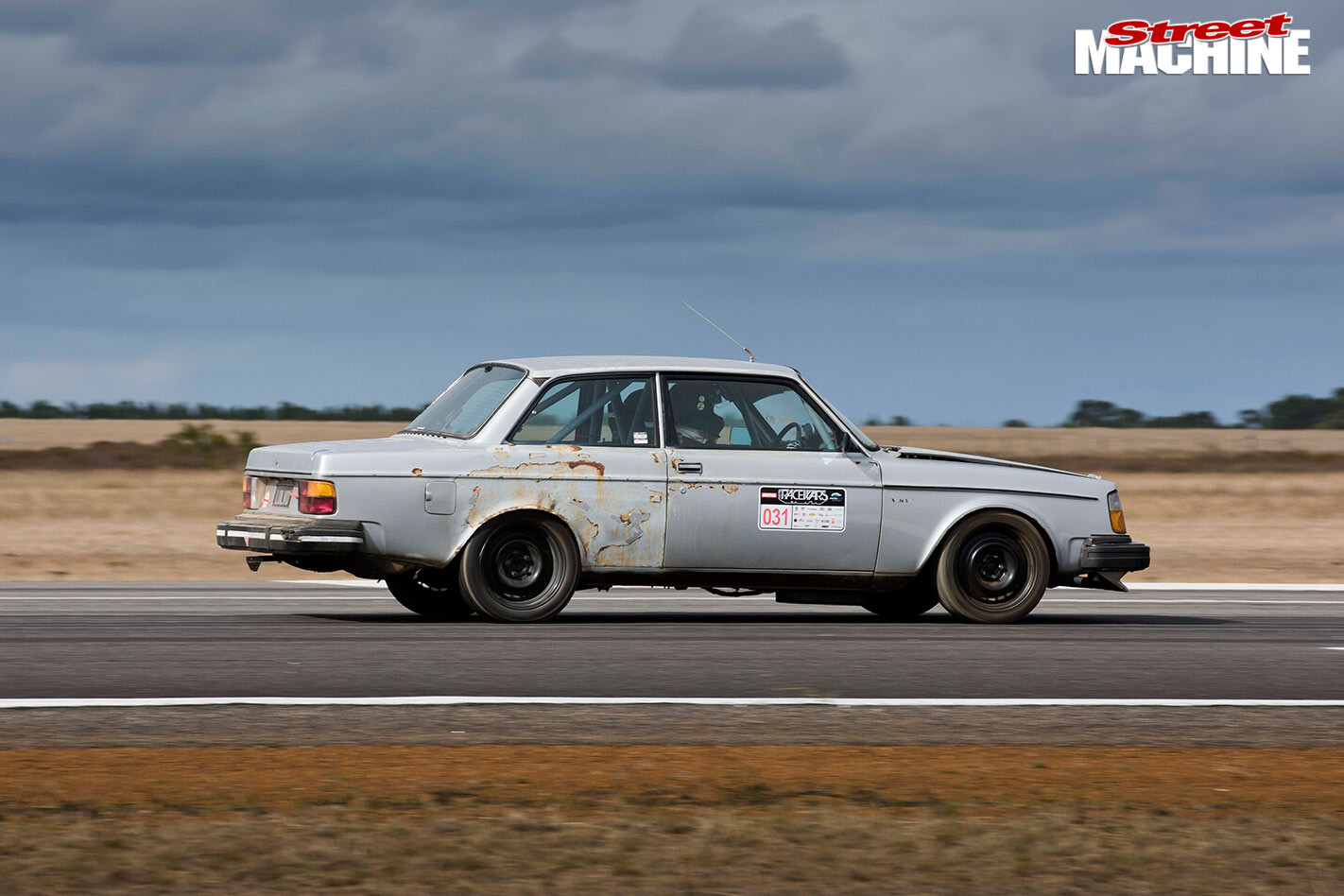 4. If there was an award for the best number plate, it would have to go to Andrew Strickland and his LOLVO. This really is just a bit of fun, and Andrew was having a ball this year after going ‘rods out’ in 2017.

With a new single-turbo LS combo screwed together, the boxy 242GT pushed its way into the stiff headwind to reel off a 279.12km/h pass in the 800m. Unfortunately, it appeared to lift a head, filling up the passenger-side bores with coolant in the process, so there were no 1000m attempts. If you want to check out some build details, LOLVO has its own Facebook page. 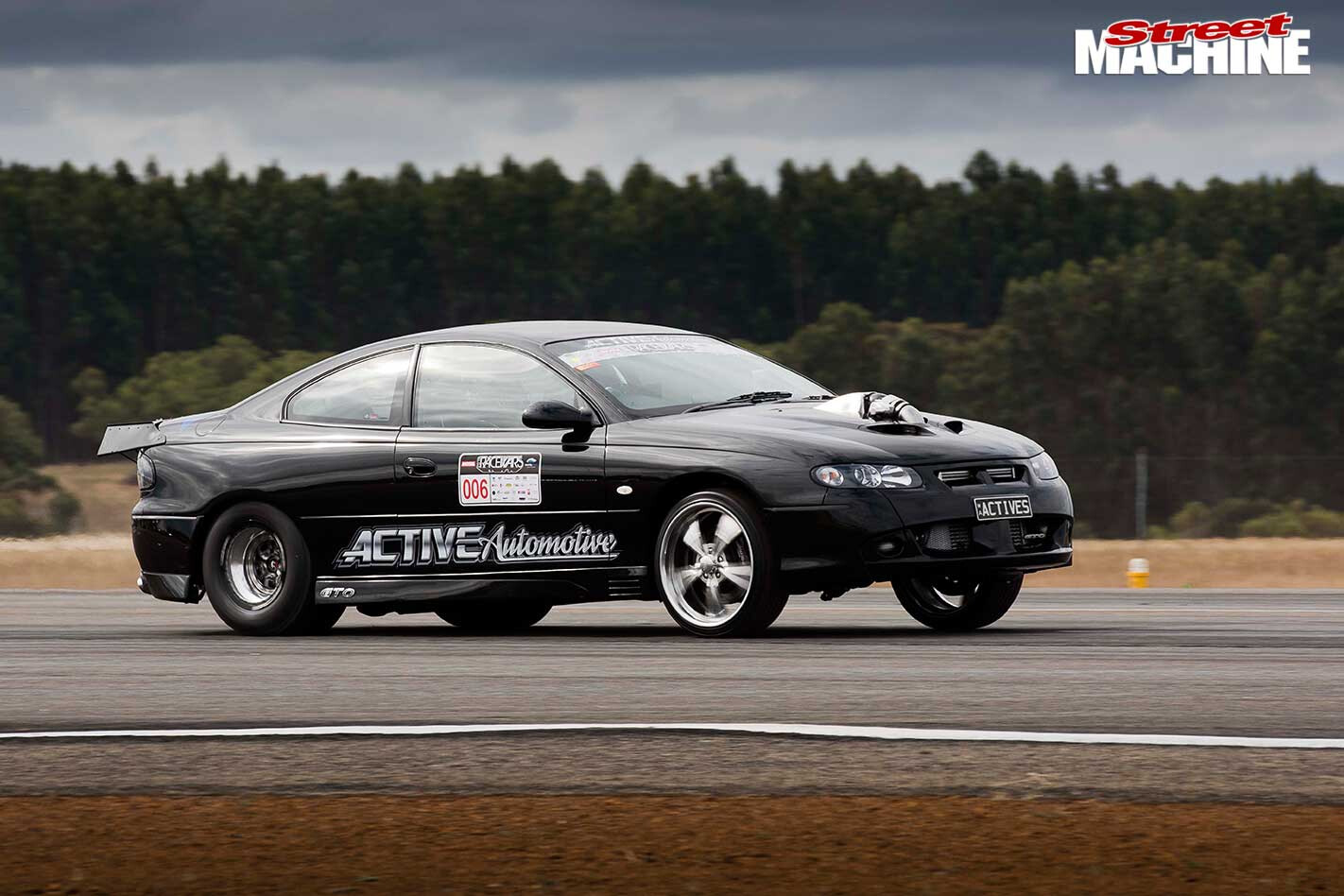 5. While last year there was just 0.65km/h separating first and second place, this year it was Eddy Tassone clearly in front, with daylight second and Peter Gray’s R33 Skyline 9.99km/h behind Eddy’s amazing – and almost record-setting – 334.93km/h run. After a horrific crash five years ago at Racewars, Eddy has rebuilt his car and his confidence to finally claim the title that everyone knew he was capable of.

The 460ci LS monster features an RHS alloy block, Mast Mozez heads and twin Precision 76/75 low-mounted turbos feeding into a Marcella Manifolds intake. With 20psi of boost, the car made over 1500hp on a hub dyno, but Eddy turned it up to 24psi on his winning run. He made another attempt very late on Sunday with a little more boost dialled in, but the car got out of shape approaching 300km/h so Eddy decided discretion was the better part of valour.

His speed puts him just 1.5km/h behind the Australian 1000m record held by Chris Thomson in an R35 Skyline, but who knows how much effect the 30km/h plus headwind had on the final result. 6. Proving that the AU Falcon is capable of amazing things, Simon Iseppi stuffed his full of twin-turbo LS power and proceeded to gobsmack everyone by romping into the 300 Club with a best run of 314.07km/h.

With its slightly tatty exterior and mismatched wheels, the car didn’t look like much – especially in base-model Forté spec – but Simon sure knows how to screw together a healthy donk using affordable parts. Under the plain-Jane skin there’s a fair bit going on, with an intercooler mounted behind the dash and the intake manifold flipped around so the throttlebody is at the rear. 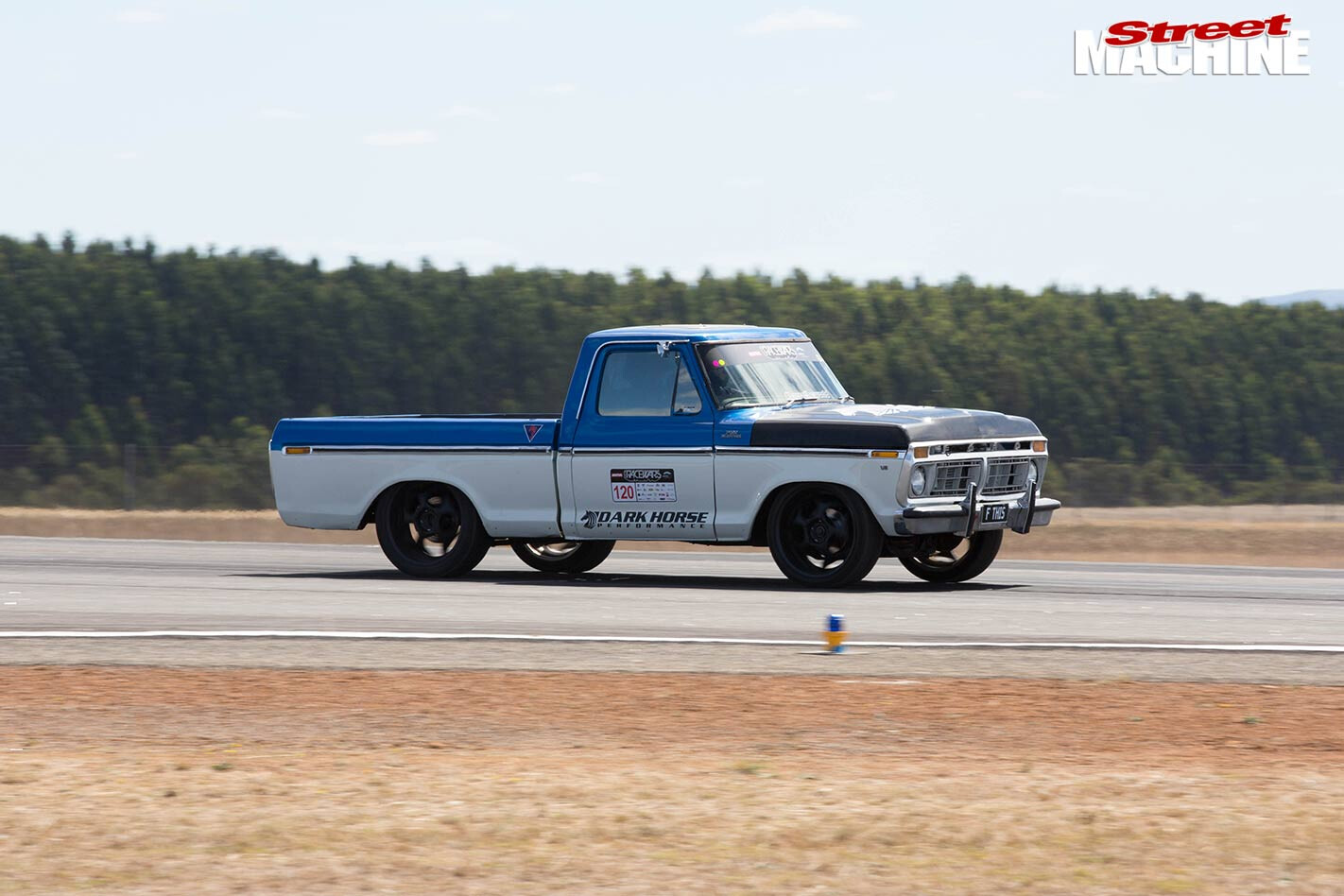 7. Scott Austen’s ’75 F100 was probably the least aerodynamic vehicle out there, but thanks to some 800hp of turbo Barra goodness he managed to push it to a best of 232.12km/h. But since we’re talking about an old American pick-up, let’s call it 144mph and change – or way faster than these things were ever intended to go.

In fact, the engine makes so much torque that it twisted the pinion out of the diff, causing the tailshaft to smash through the floor. This happened on Saturday after just three runs, and Matt from Dark Horse Motorsports worked his arse off to get the truck ready for Sunday. Thankfully everything hung together out back and they managed to get another nine passes in. 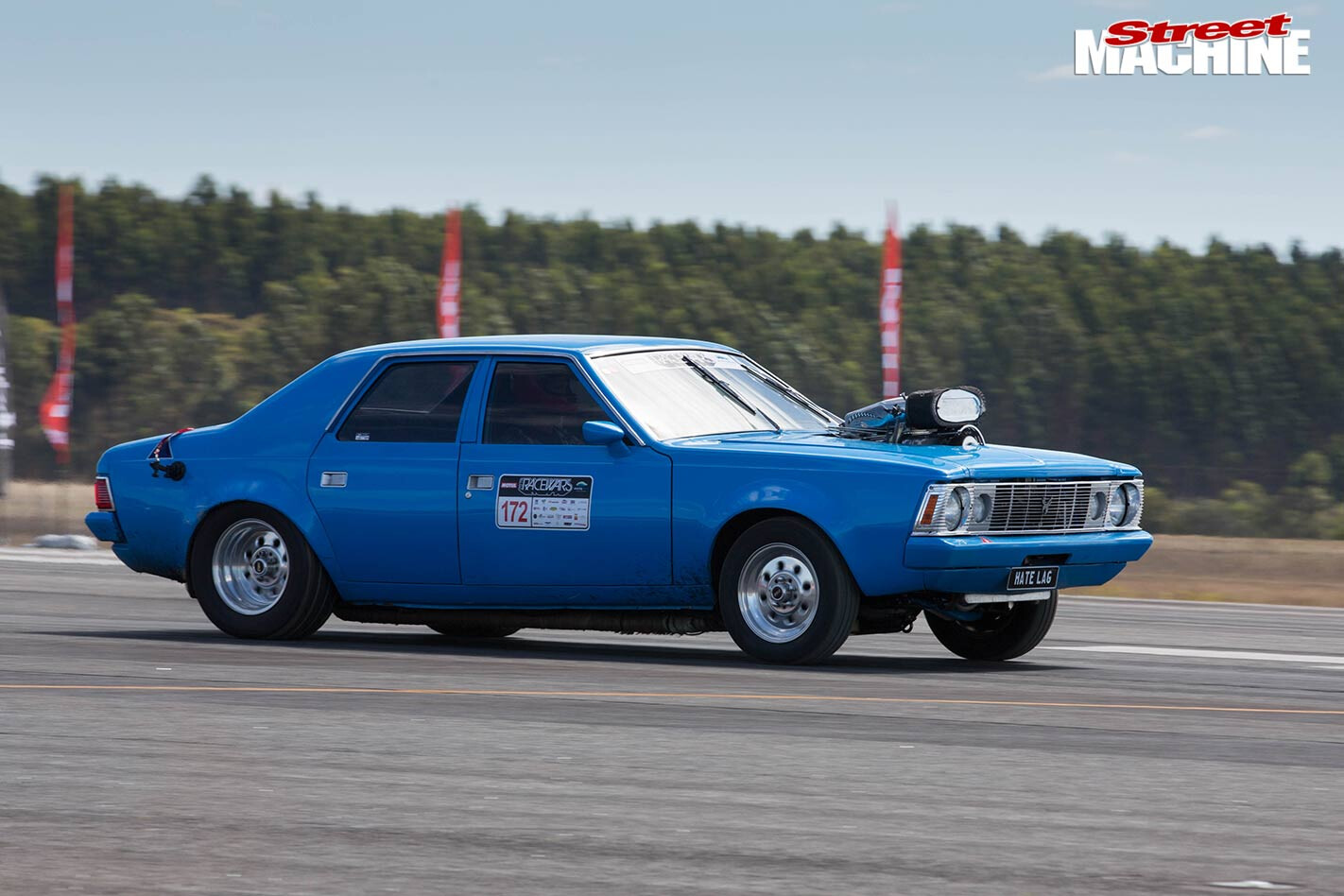 8. If there’s a Rambler at an event, you can bet I’ll find it. Shayne Couch rocked up in his ’70 Hornet with blown, methanol SBC power and ran 245.21km/h. Who knows how fast it could have gone with a Rambler motor! 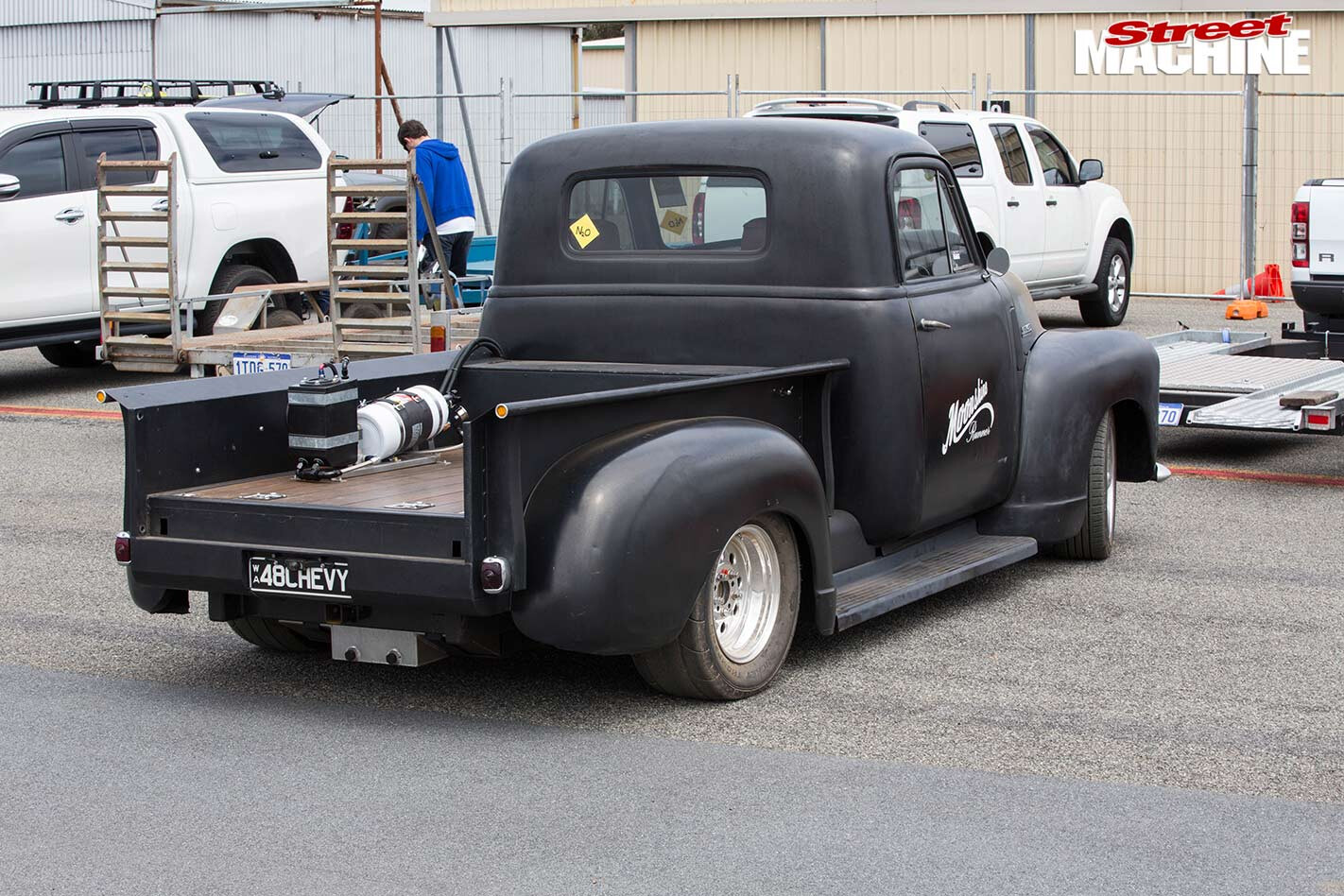 9. Justin Zrinski rocked up in his ’48 Chev pick-up. With a BBC, MSD Atomic EFI and a nitrous bottle in the back, he was mainly there for a bit of fun over the 400m and the Cash Days flashlight drags. Normally he’s piloting stupidly powerful Subarus that feature at the top end of the leaderboard. 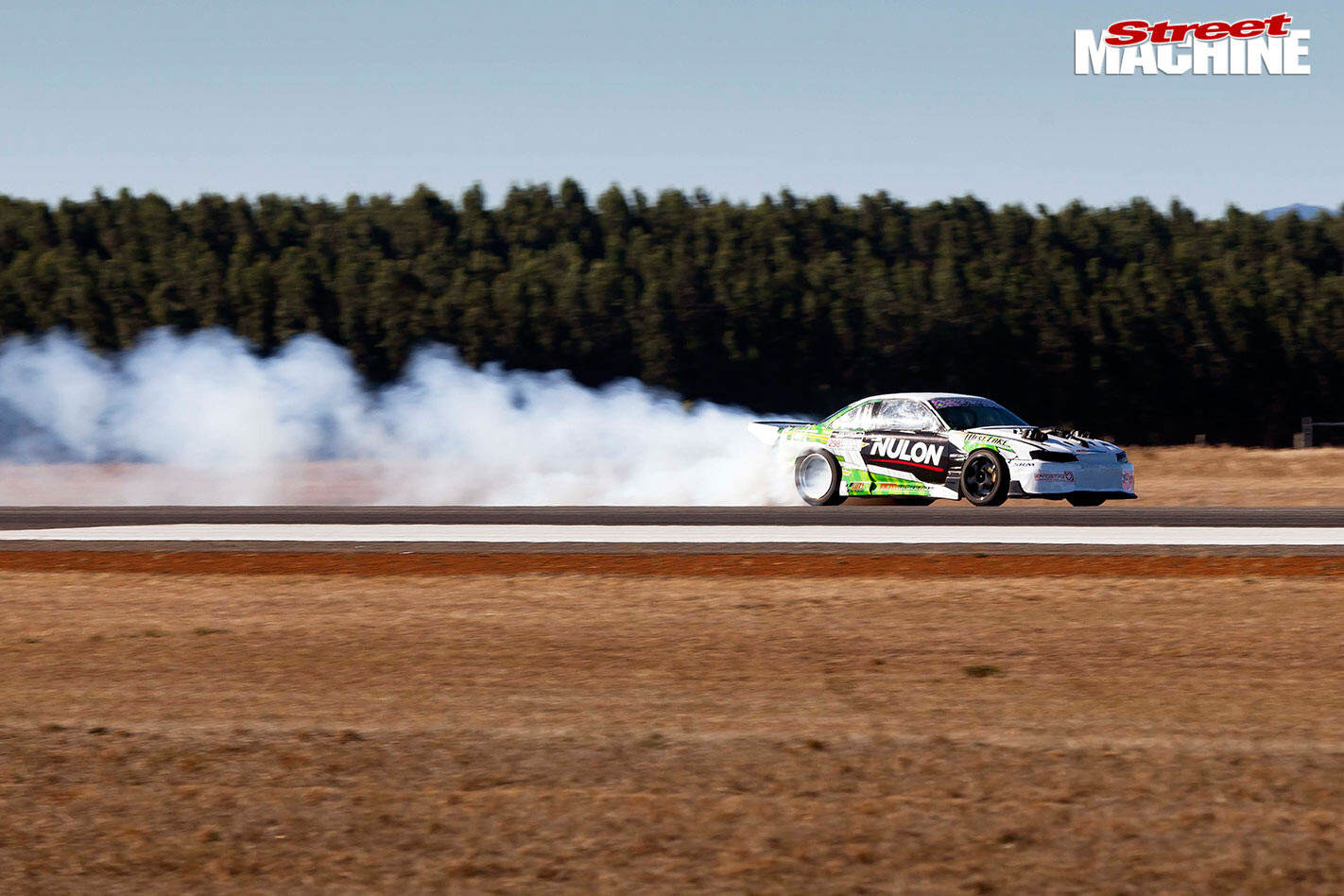 10. Some people think Adam Monck is a little bit nuts – actually, that’s me. I reckon he’s dead-set crazy taking a drift car and somehow making it run over 300km/h while smoking the bags. He’s been trying for a few years now to join the 300 Club and this year he finally cracked it, and boy was he happy. 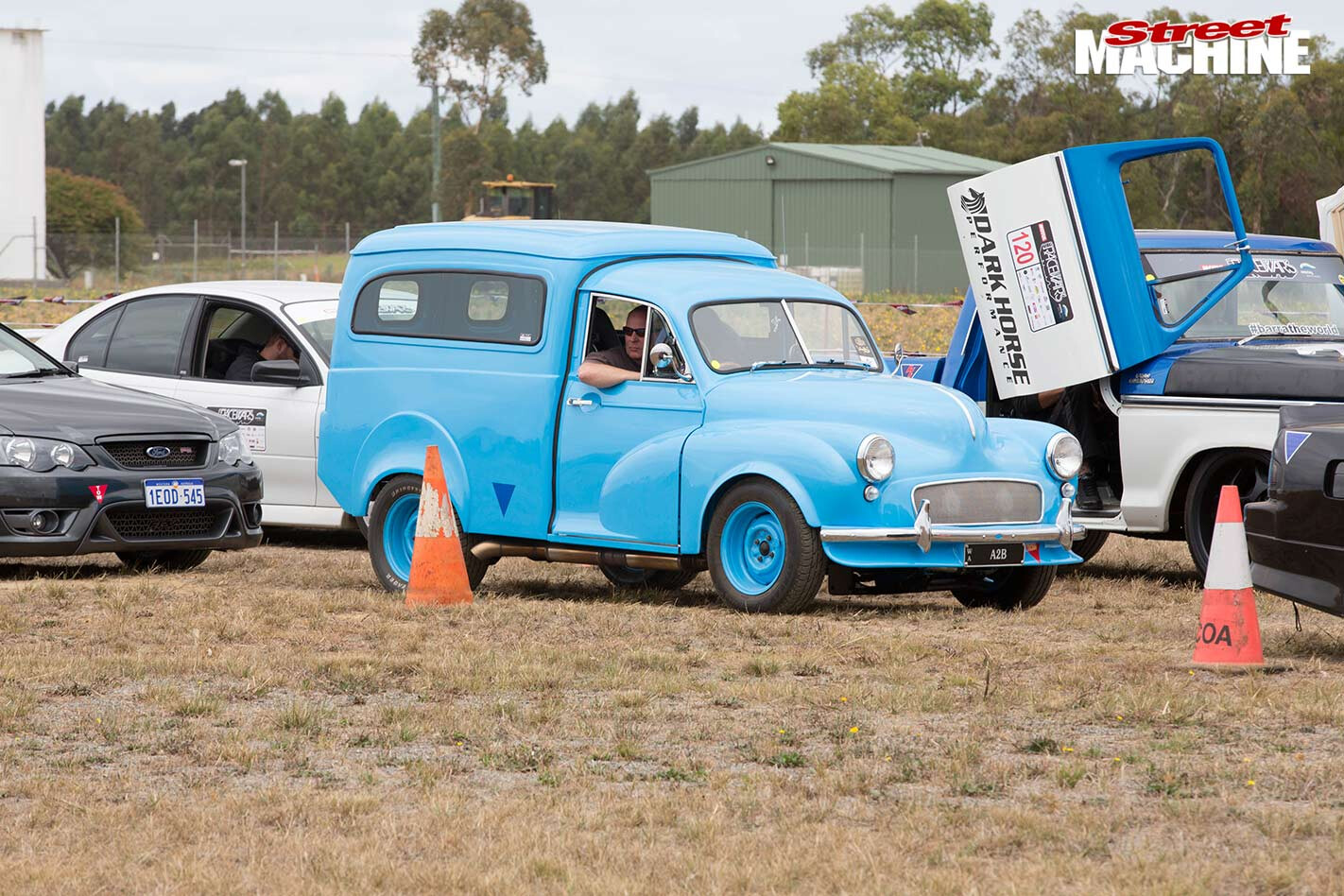 11. Ian Latta has taken ‘dare to be different’ to a whole new level. His ’53 Morris van featured some subtle fender flares, a flip front, Torana XU-1 dashboard and – wait for it – a turbocharged 13B rotary! He wasn’t keen on taking it on the long track, but it sure held its own in the shorter stuff.