OVER 300 of the world’s toughest street cars flooded into Gateway Motorsports Park in Madison, Illinois this morning to register for Hot Rod Drag Week 2015. We popped along to check out some of the awesome rides.

What’s Drag Week, you ask? It’s a high-octane torture test that pits car and driver against the toughest conditions imaginable. Basically you race your car at the first track, hand in your timeslip, and then drive to the next track to race, and repeat that for five days. The trouble is the tracks are hundreds of miles apart, so not only do you have normal racing wear and tear to worry about, there’s also the weather, potholes, police and general fatigue to factor in.

Why do the entrants do it? Because Drag Week is probably the most awesome event in the history of cars. Where else can you race and road-trip throughout America with over 300 other entrants? It’s a mobile horsepower party, and everyone is invited.

This year there’s entrants from all over the world – we’ve bumped into teams from Canada, Australia and even Finland. A large contingent of Aussies have invaded the event this year, with five cars entered and a whole busload of guys spectating. We’ll keep you up to date with their progress as the week unfolds.

This year the event will start and finish at Gateway Motorsports Park, with three other tracks in between. Stay tuned for more updates as we follow along for seven days of street-and-strip insanity. 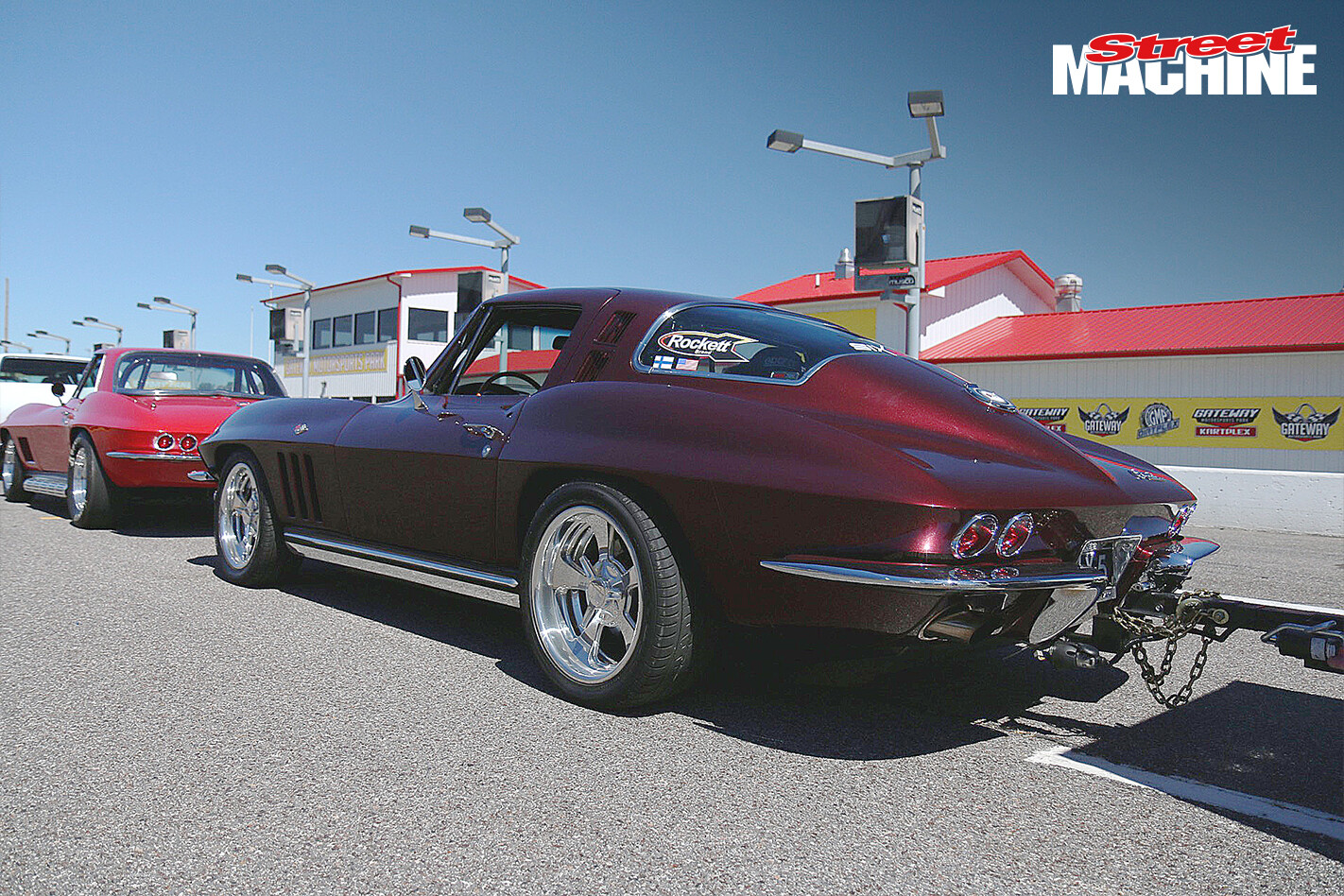 Kimmo Nevalainen brought his ’65 Corvette over from Helsinki in Finland, but this isn’t just another pretty ’Vette. It runs just over 200mph on the standing mile, and Kimmo plans to do the Optima Challenge and the Texas Mile after he completes Drag Week 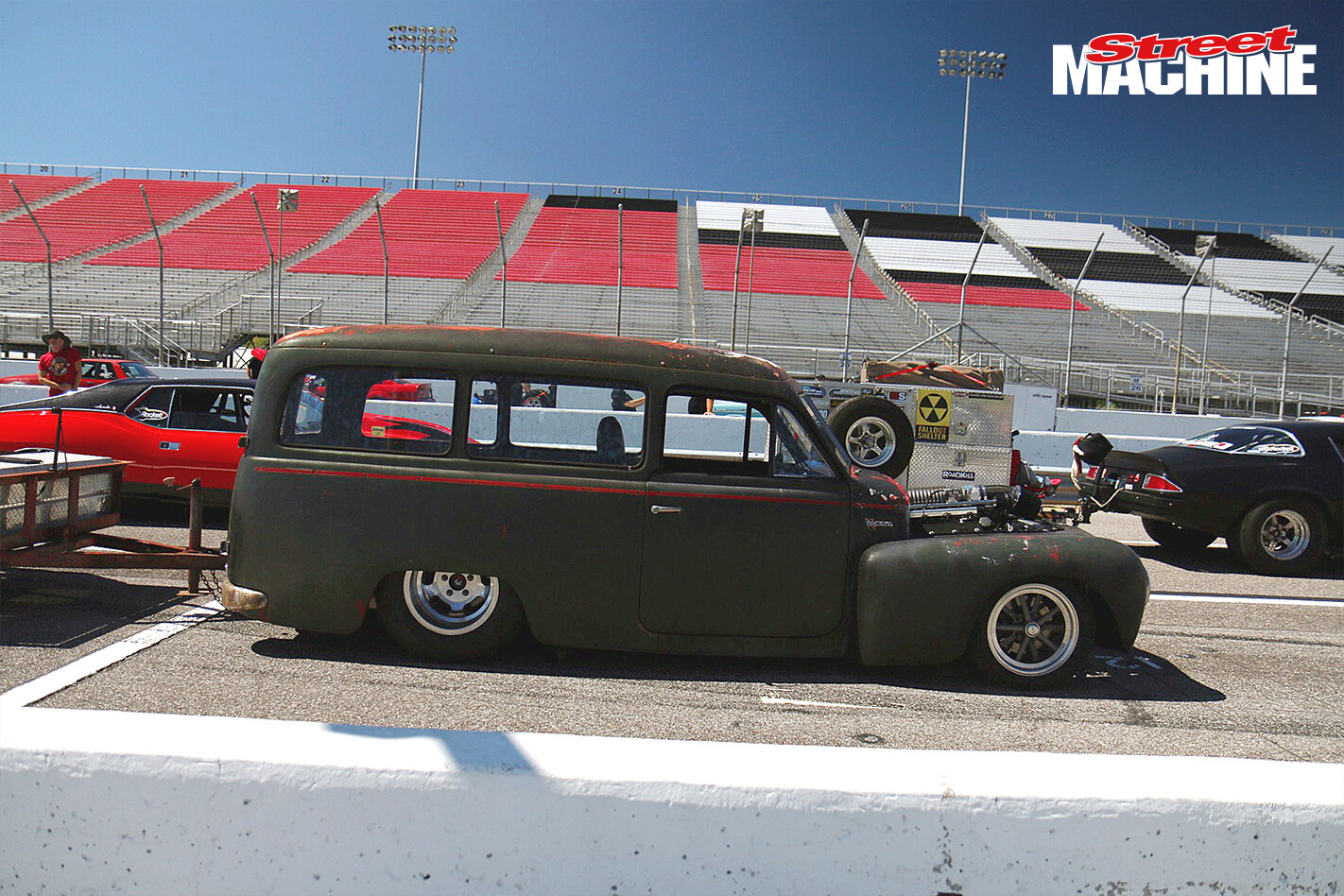 Roger Davis wanted an old Volvo after seeing one in college, so he found this ’58 wagon to modify. It’s got a Magnuson-blown six-litre that punches out 540hp to the treads 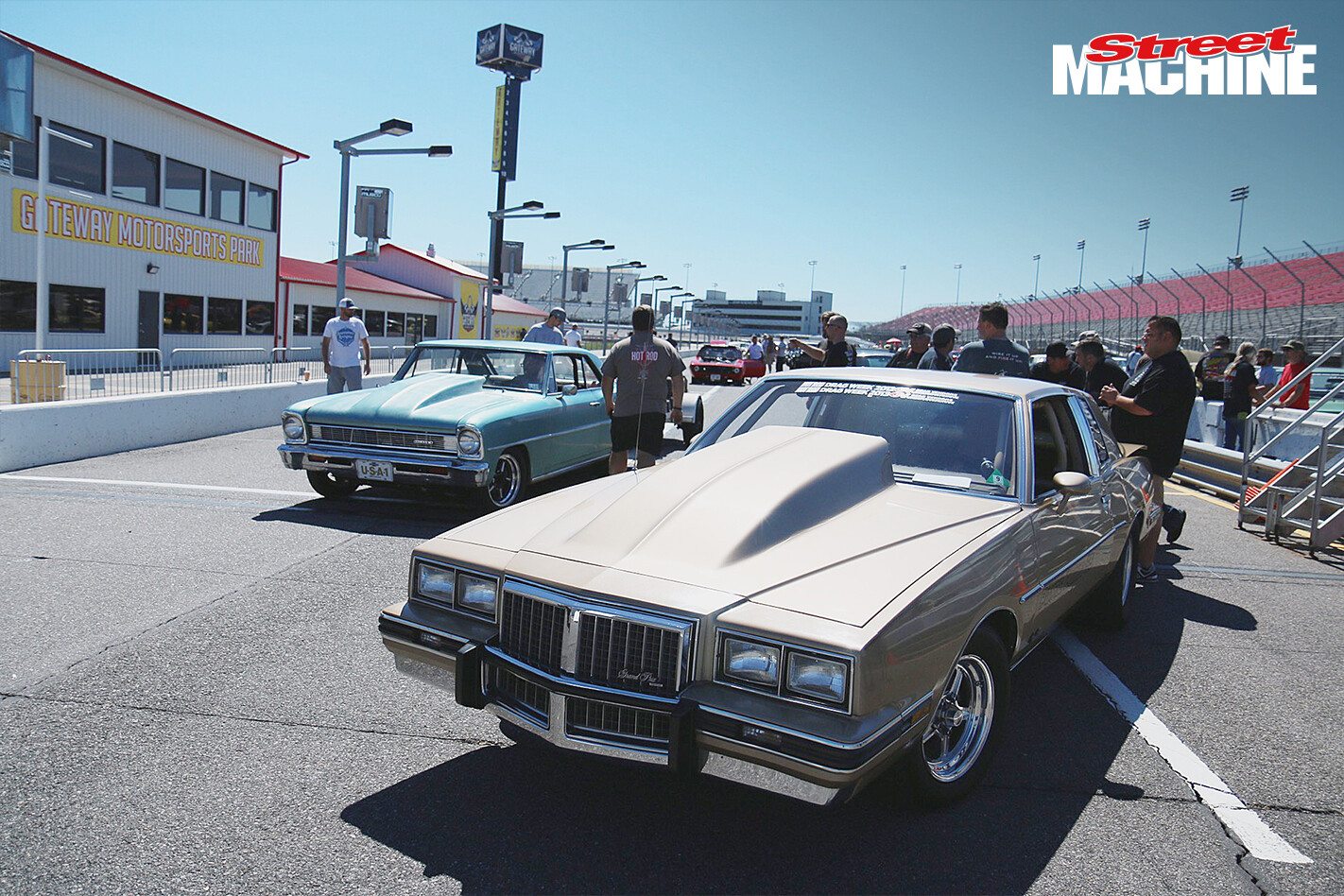 All the way from New Jersey, Mark Sussino brought his ’86 Grand Prix along for some fun. It’s got some serious grunt too. There’s a 421ci small-block up the front with a 225hp shot of giggle gas; it’s gone 9.6@139mph 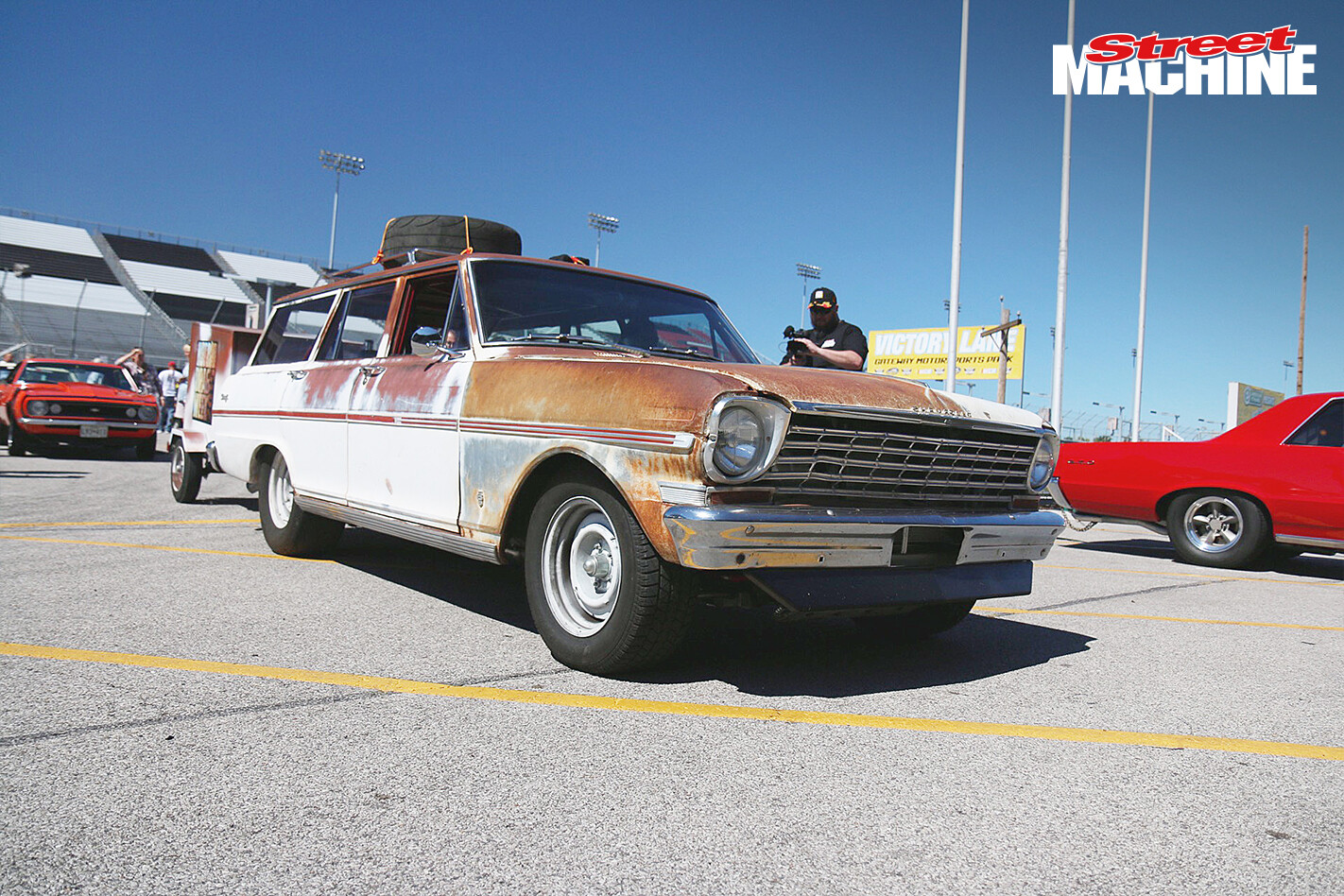 Wagons are definitely in this year, and Kelly Smith’s ’63 Nova is very cool. The patina is genuine, but the engine is a 376ci LS donk with a Harrop blower. The motor has only been in for three days, so we’ll find out what it runs tonight 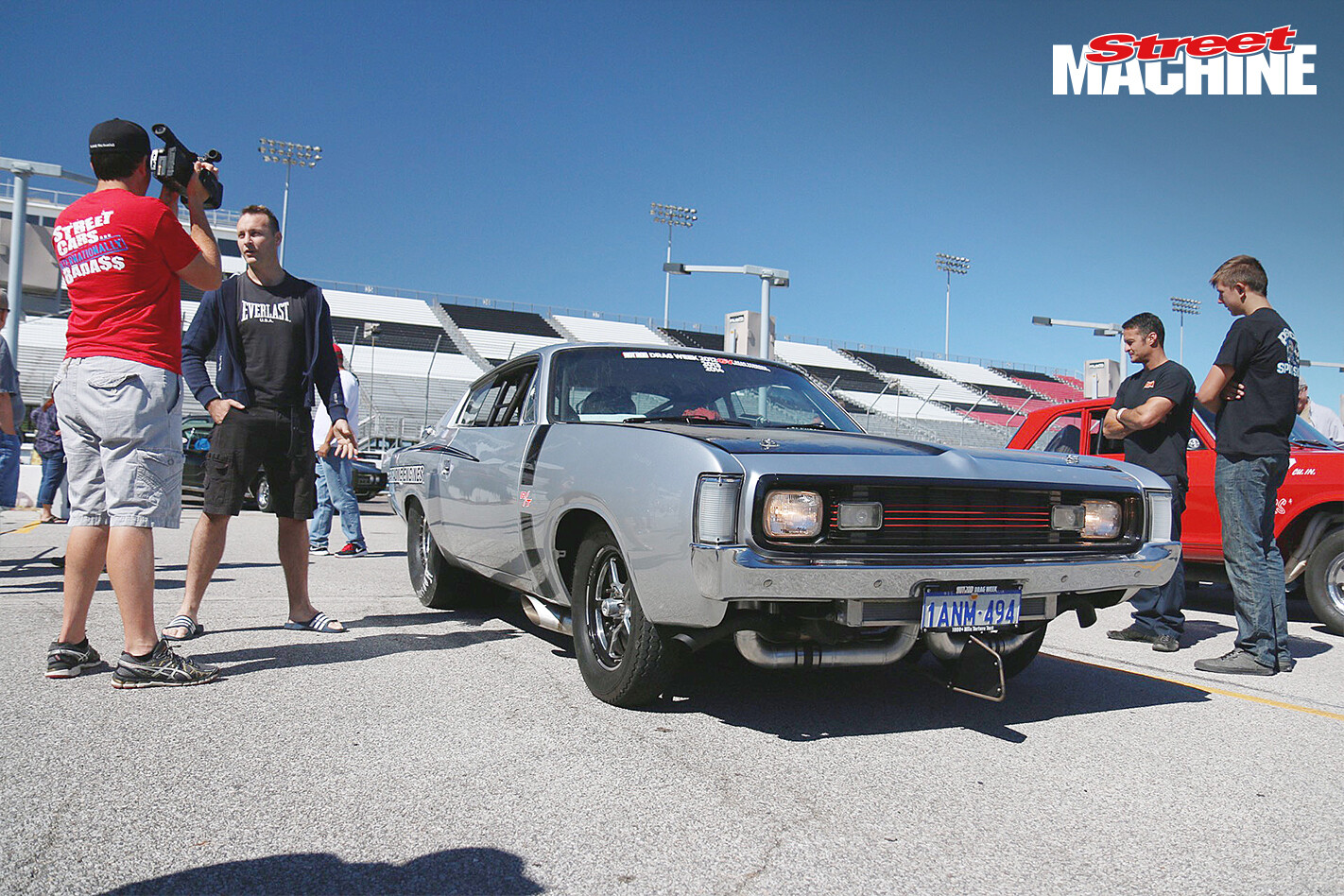 John Faraone’s Charger was held up in US customs when the freight forwarder forgot a piece of paperwork. He’s got the car now and looking to run some numbers after getting the rear end adjusted by Skinny Kid Race Cars 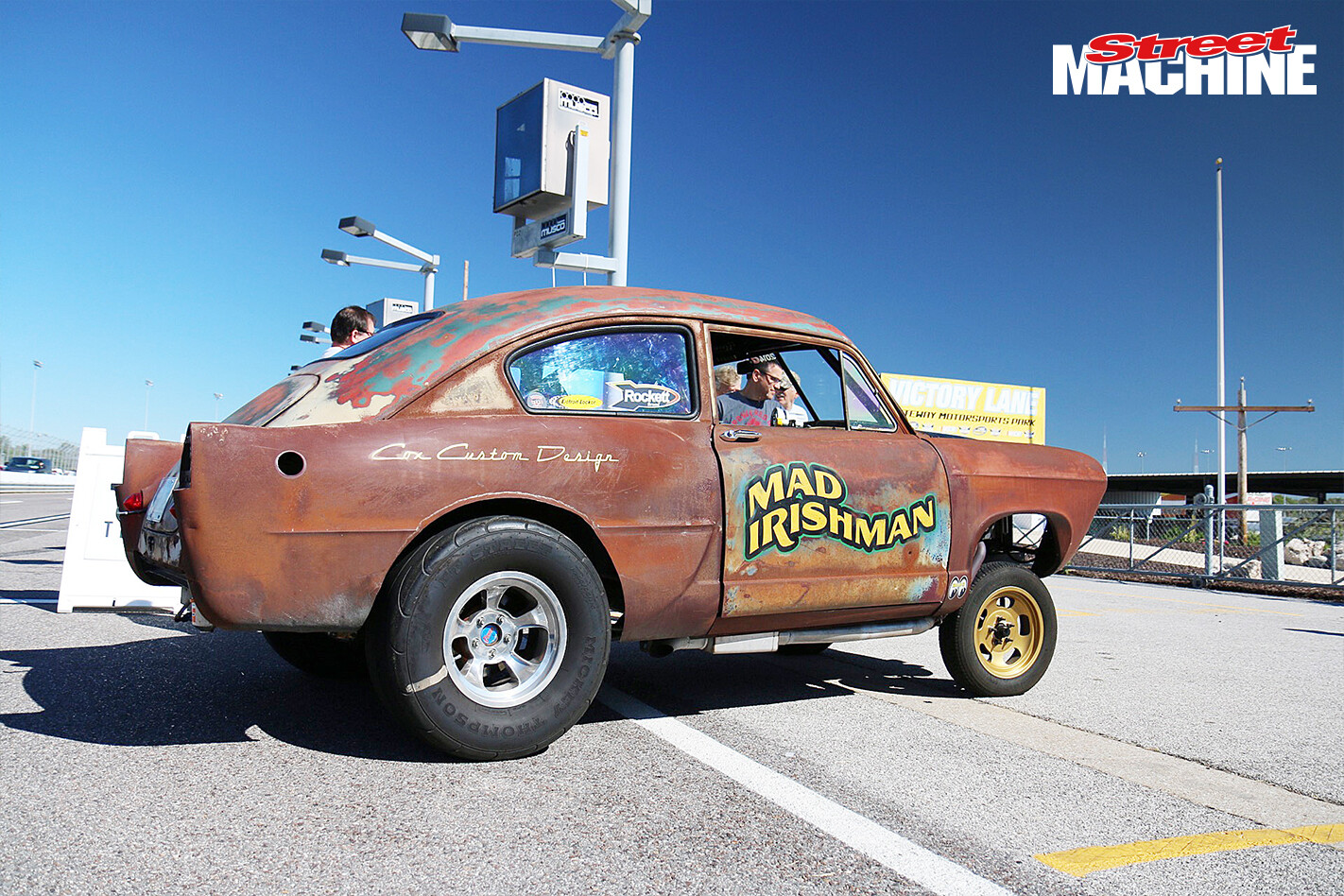 Henry Js were popular gassers back in the 60s, but Mike Cox didn’t build his until 2013. It had just 200 miles on it when they took it on Drag Week that year. It runs high nines with a 715hp 555ci big-block Down from Alberta, Canada, Matt Blasco’s Dart is packing nearly 2000hp at the tyres. Up front it’s got an all-alloy 572ci big-block with twin 91mm turbos. He’s run high sevens, but hopes to dip into the high-six-second zone David Kirwin’s Civic is a neat-looking Gen 1 sleeper, built with a lot of help from his buddy Shaun. Up front it’s got a turbocharged B16 engine with 20psi, and it runs 11.7@118mph Frank Saponaro’s Nova wagon only has five passes on it and it has already gone 8.0@176mph. He’s hoping for sevens out of it this week 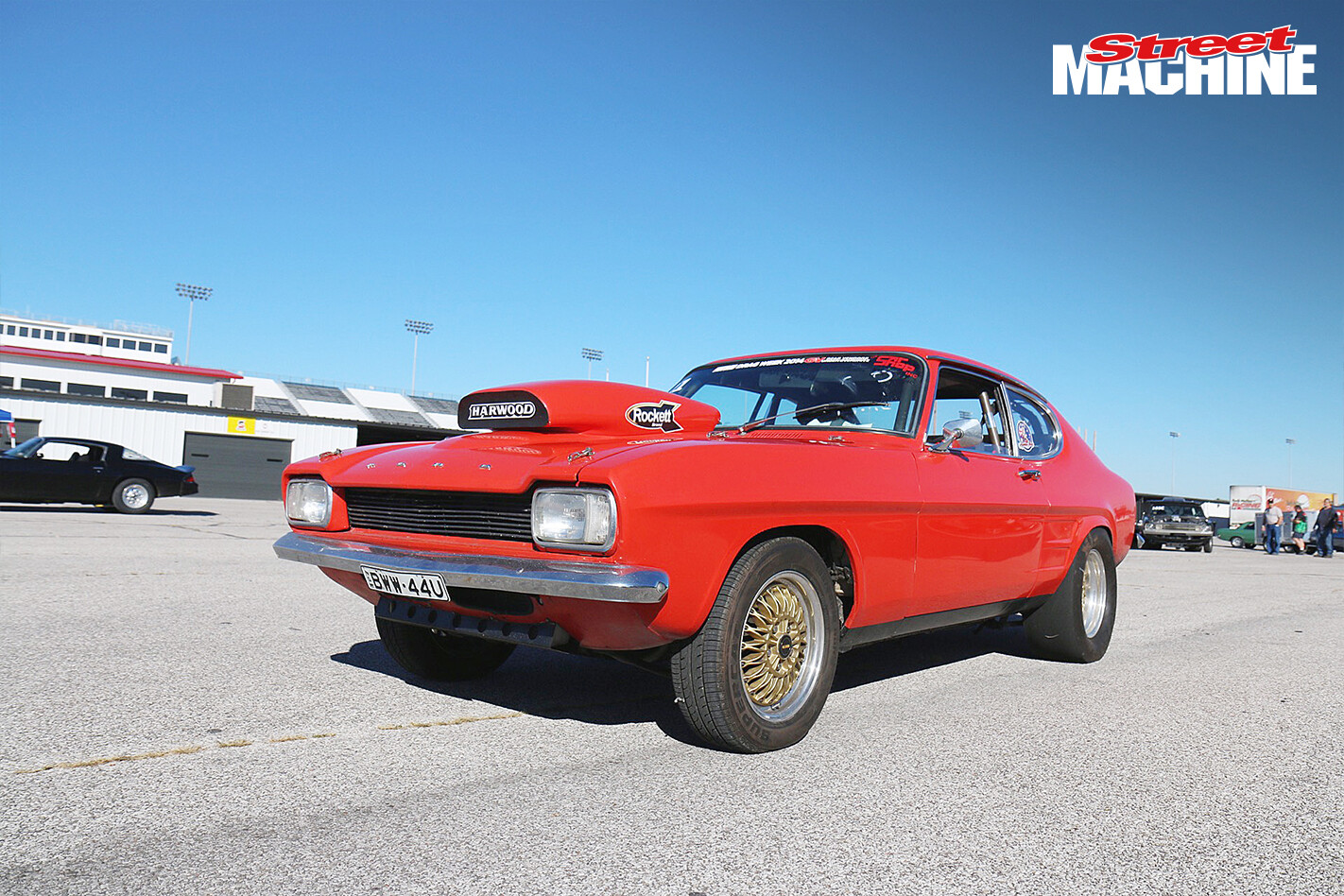 Steve Reimann and Mark Arblaster are back with the little orange Capri. They reckon this might be the last time out for the small-block Ford-powered beast and they’re hoping to dominate their class 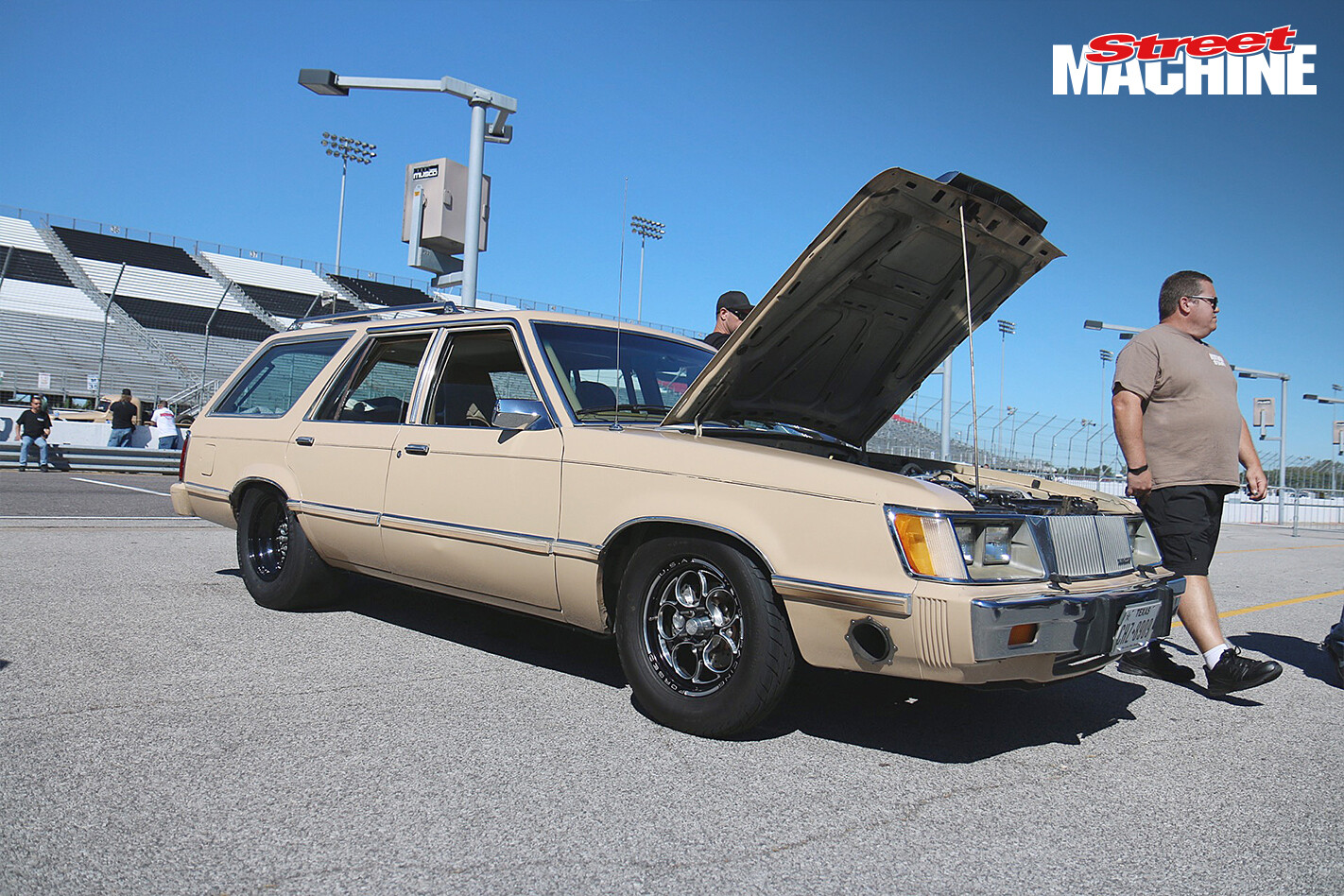 Doesn’t look like 1000rwhp, does it? Jason Doisher’s Mercury Marquis wagon runs a six-litre LS engine with an 80mm turbo; he’s hoping for high eights out of it This Model A coupe is packing a twin-turbo 380ci small-block Ford engine with a blow-through set-up, and owner Troy drove it all the way from Arizona for Drag Week.