WITH almost 400 cars entered in Drag Week 2019, it is almost impossible for one person to see all of them, let alone report on them! There are a ton of cool cars we’ve missed in this year’s online coverage, though we’ll no doubt cover more when we do our full report on the event in the December mag. But for now, here is our final look at the cars that turned our heads in 2019.

1. Jacki Steinke is the wife of Rick ‘Honk If Parts Fall Off’ Steinke of eight-second Chevelle Malibu four-door fame – hence the reason she is nicknamed Mrs Honk. Jacki was racing at her first Drag Week in her ’94 Mustang, which is powered by a D1SC ProCharged 383ci SBC, backed by a Turbo 400 and 8.8-inch diff with 3.7 gears. 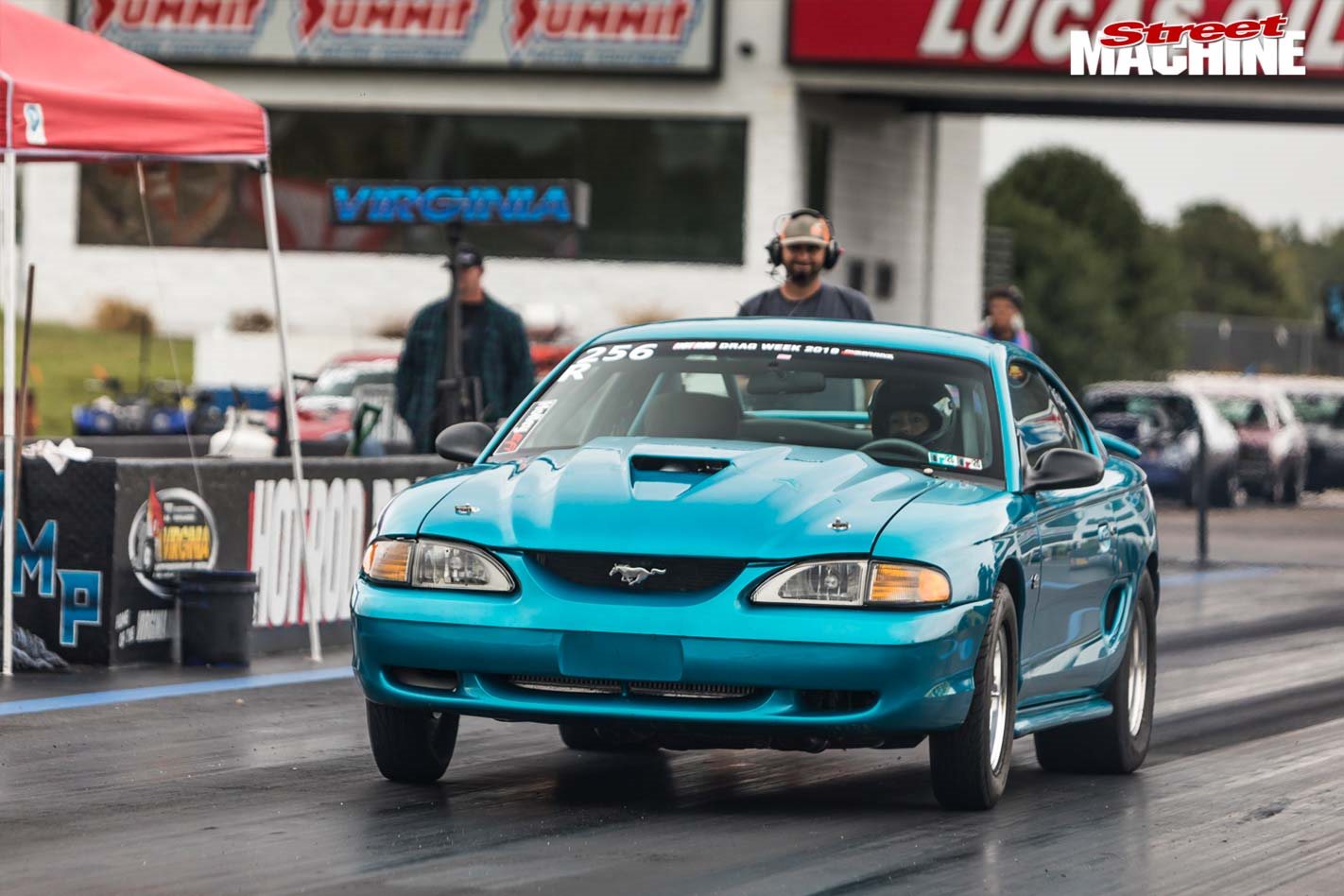 And she had one hell of a week. In a car that is only certified to run as quick as 10 seconds, she reeled off a 10.06, a 10.06, a 10.00, a 10.05 and a 10.01 to top-qualify for the Street Machine Eliminator Shootout. Unfortunately, she got a little too excited in the first round of the Shootout and red-lit on the pro tree, but still took home the award for Quickest in Street Machine Eliminator. 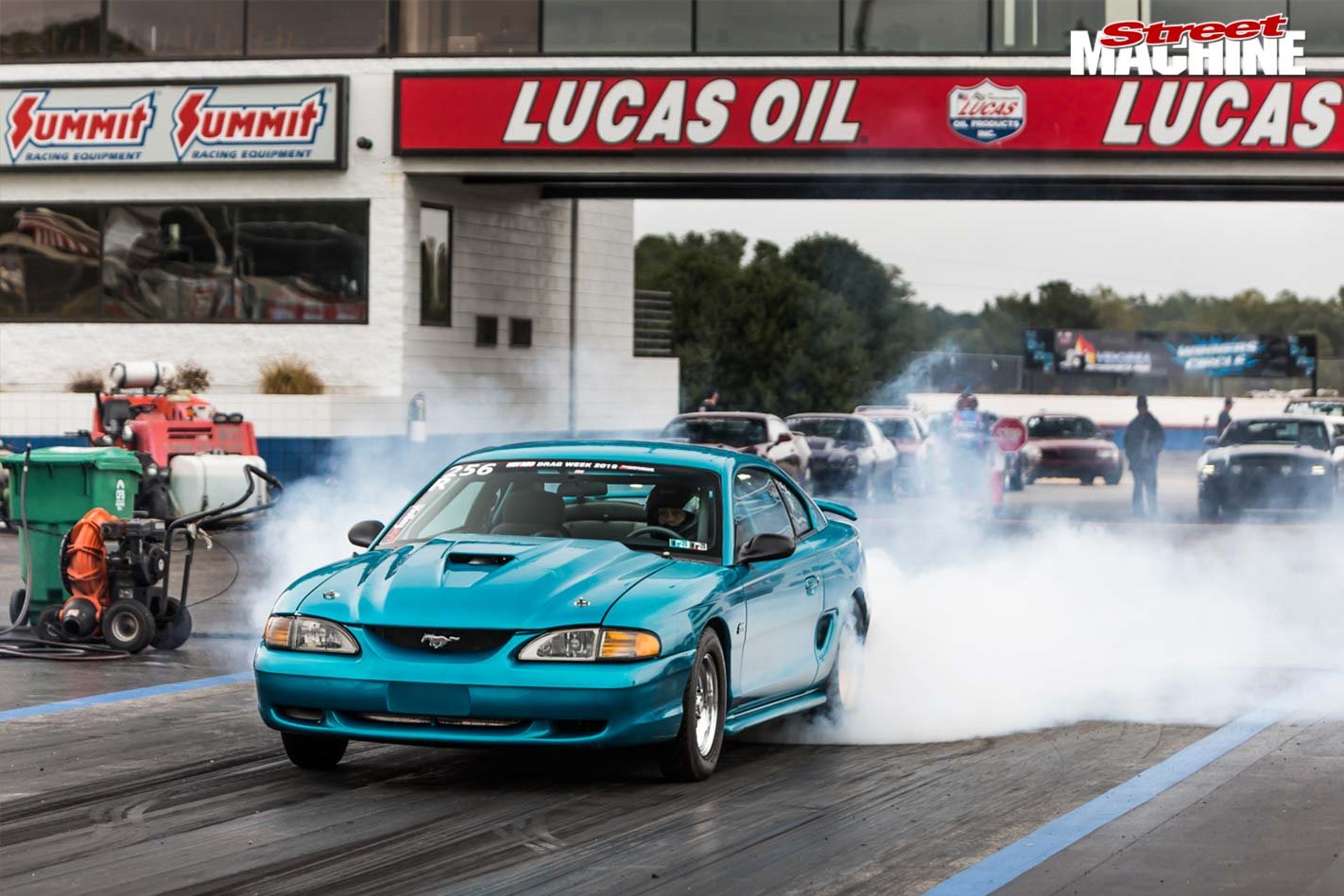 “It’s been awesome,” said Jacki. “I didn’t know how the car was going to do, but it did great all week. In the Shootout, I was trying to kill the tree and I wasn’t as focussed as I should have been on my side of the tree. I was against a slower car, so his tree flashed and I let go of my button and went red. But it’s okay, I had a great week; it was amazing.” 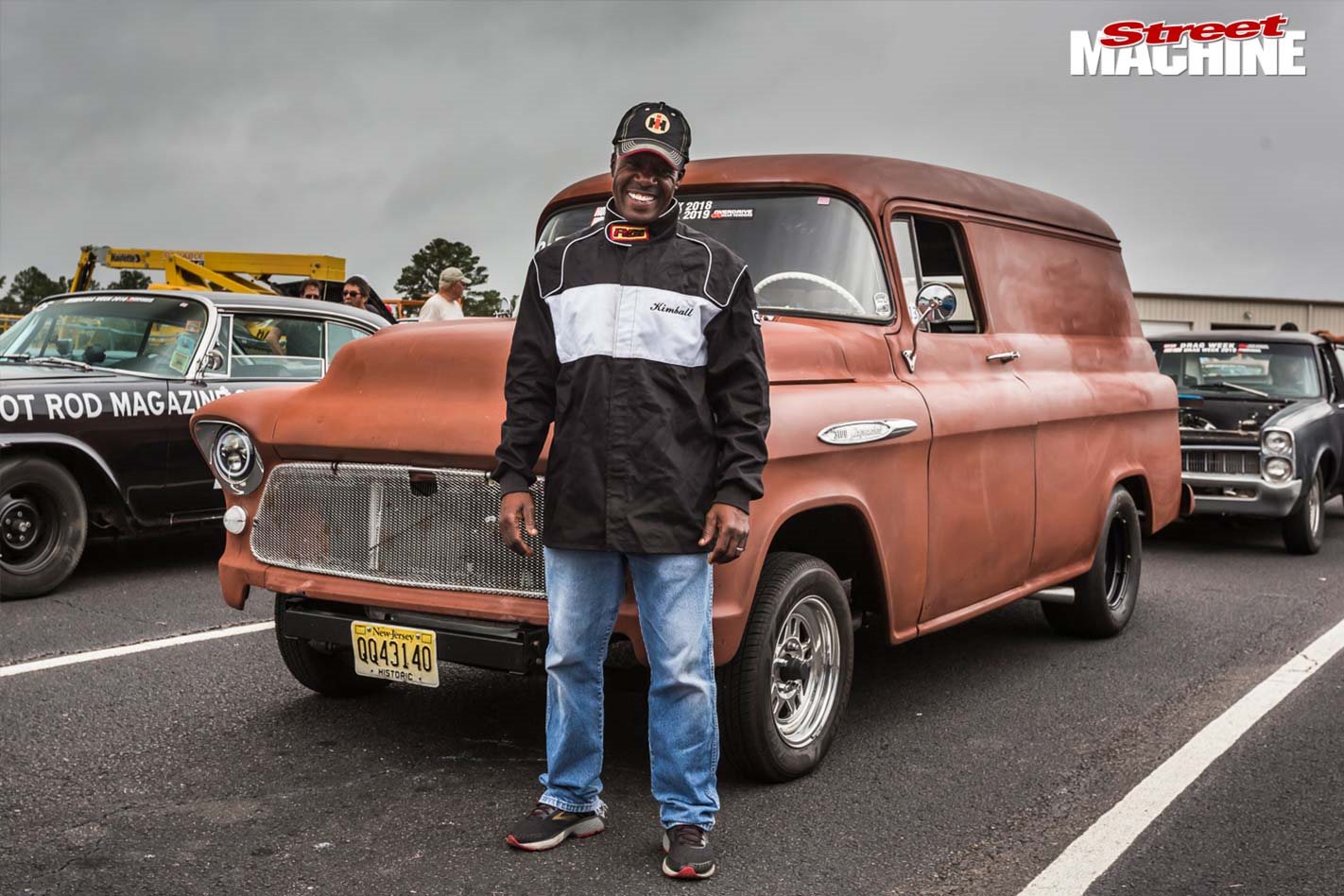 2. Kimball Hodge from Rahway, New Jersey had his ’57 Chevy panel truck back at Drag Week for the third time. The ratty-looking big bopper has got a 496ci big-block with a Pro Systems carby, backed by a shift-kitted Turbo 400 transmission and 1974 Camaro rear end. 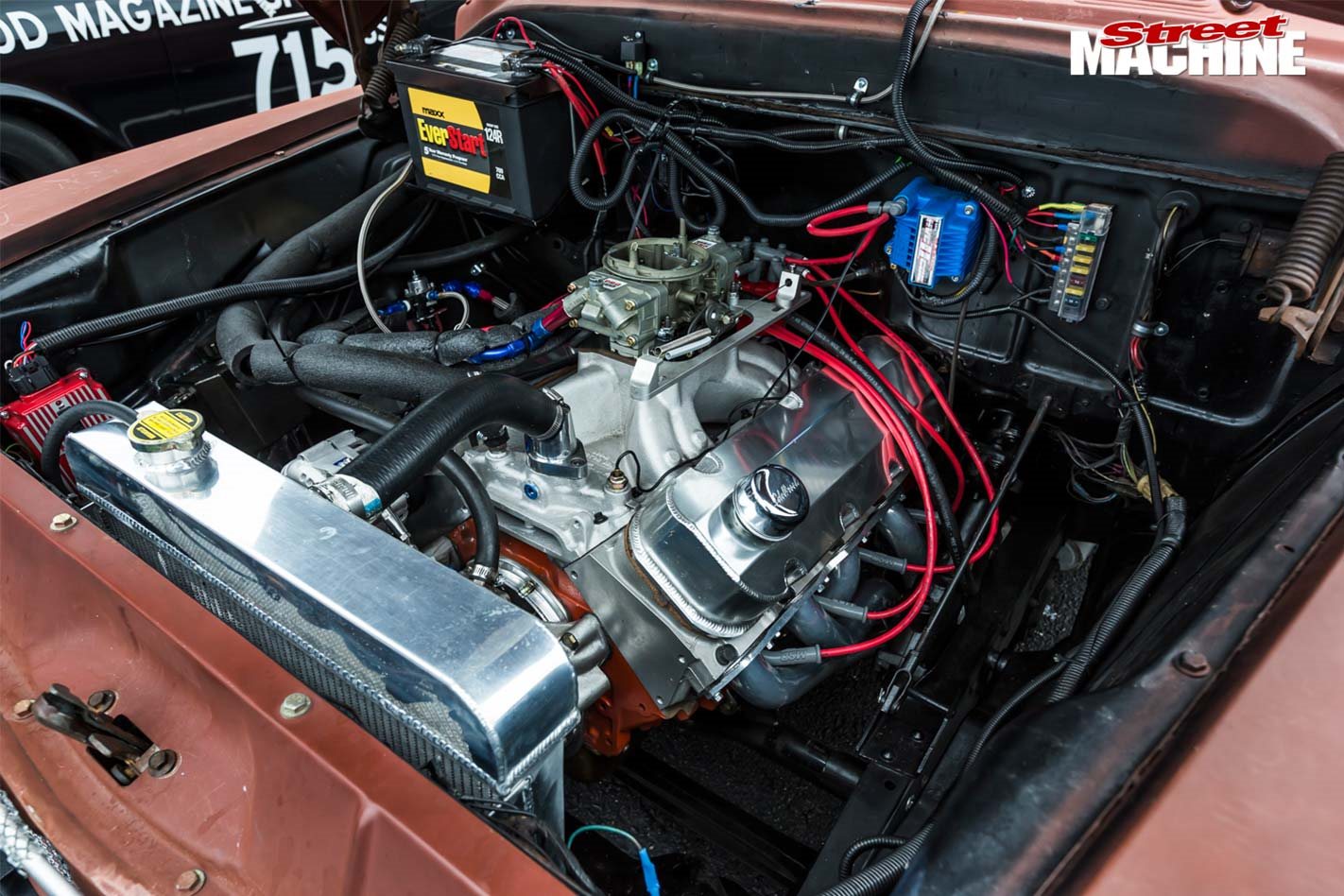 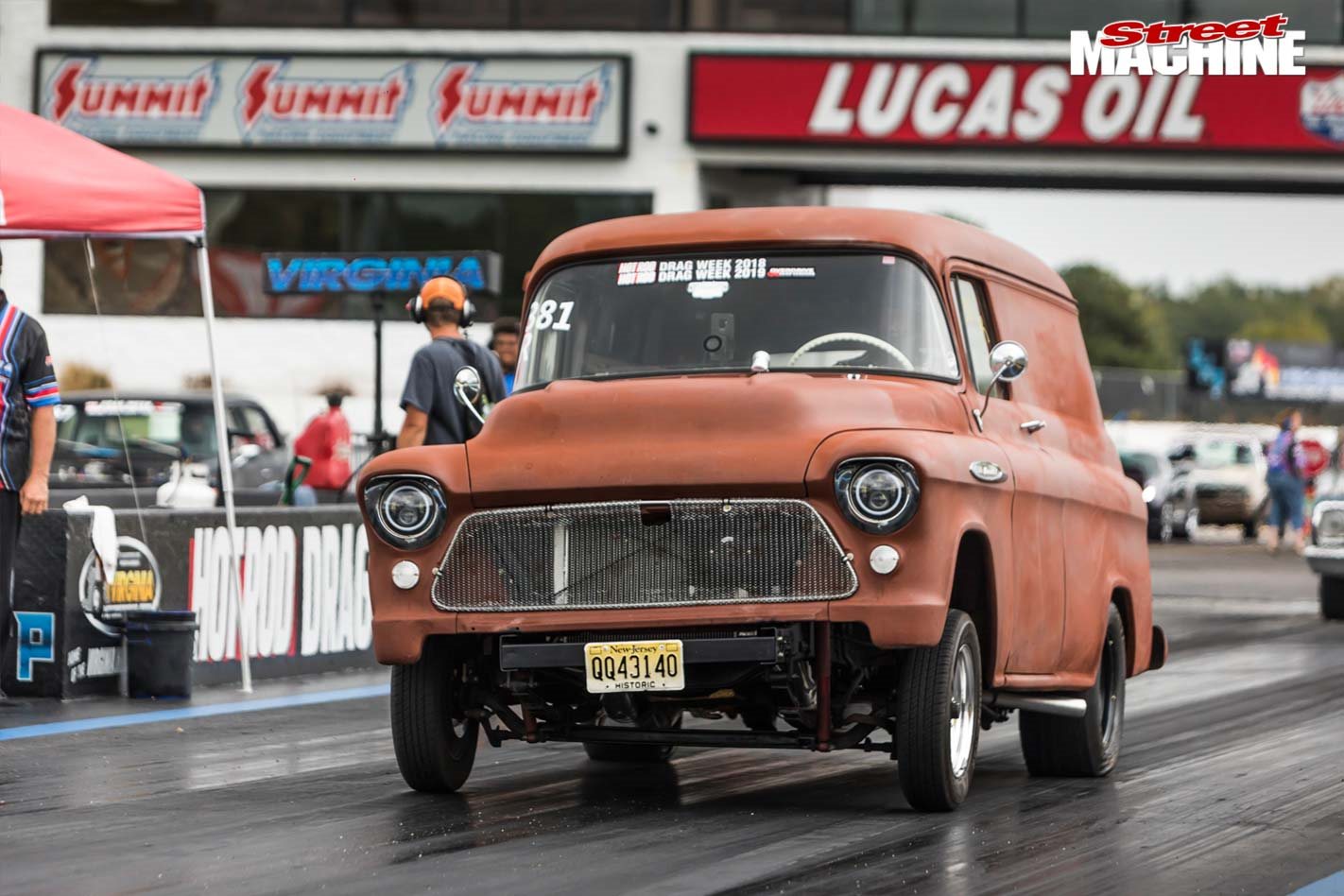 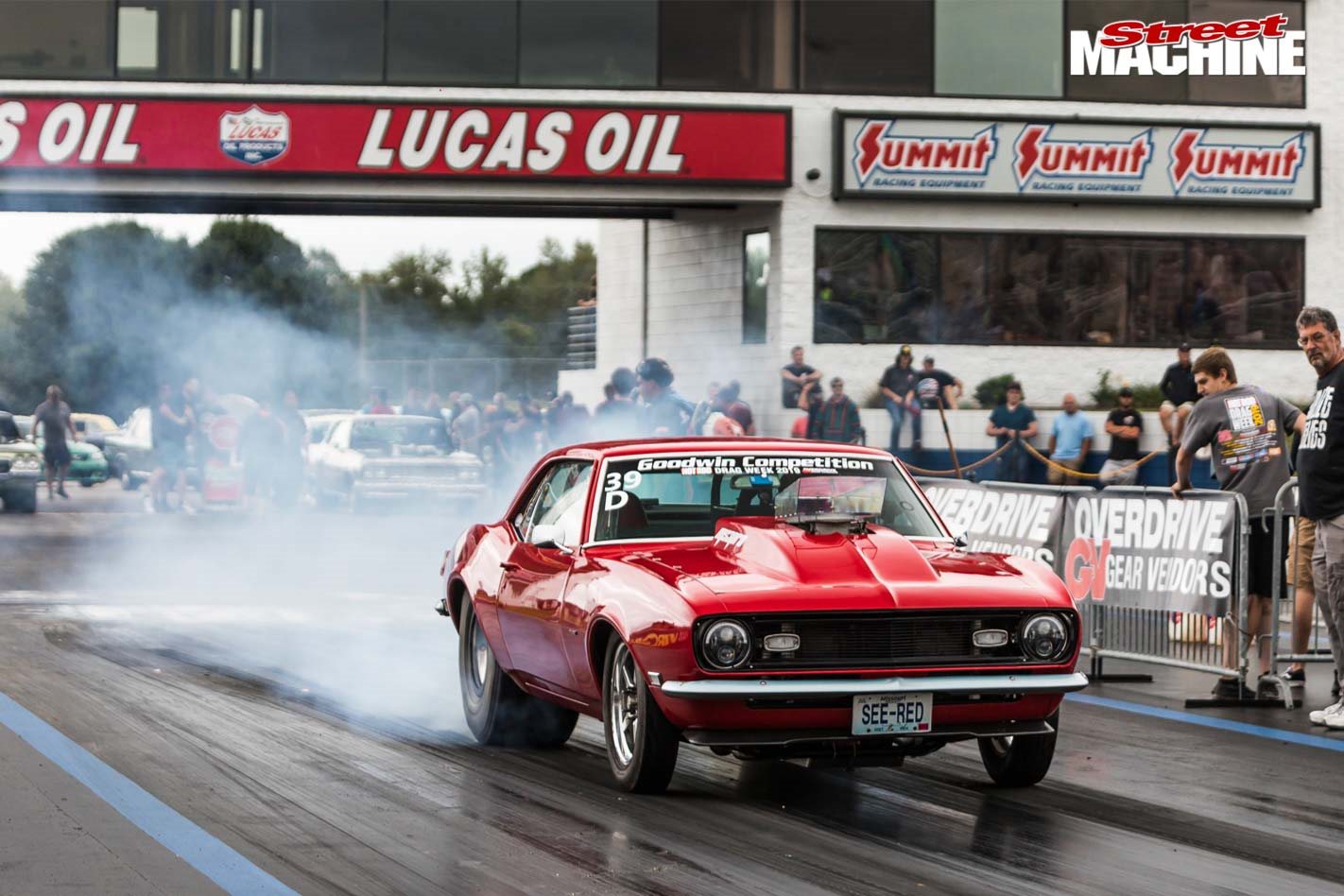 3. “We had a week of overcoming things that were a pretty big nuisance, but we got into the computer and found the issues, of which there were several,” said Doc. “It’s bad enough when you’ve got one gremlin, let alone three. The road cruise was a dream, but when we started trying to get aggressive with the tune-up, we had weird electrical problems, which we think might have been the crank sensor or some interference with the ECU itself.” 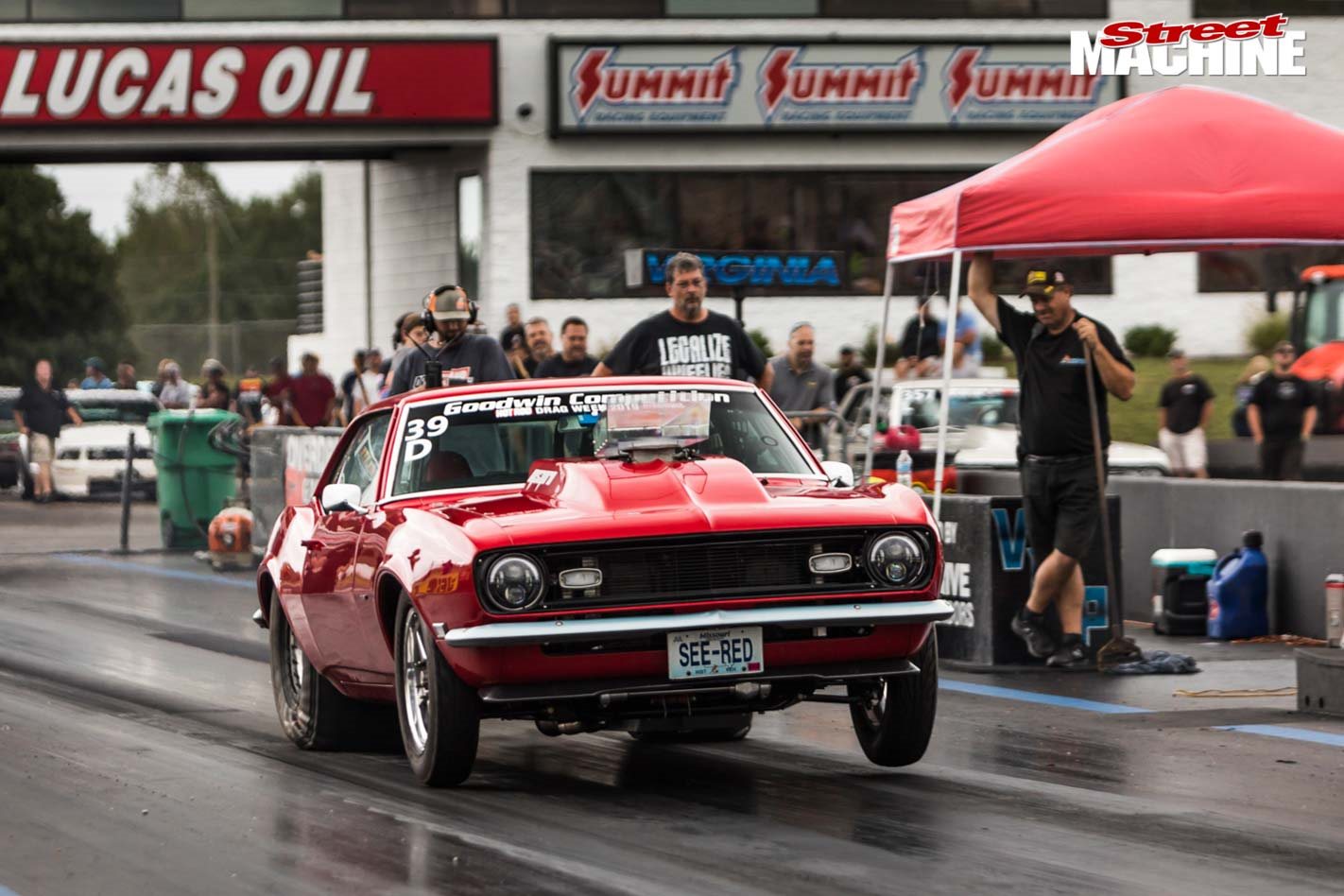 The class win is yet another feather in the cap for the world’s quickest naturally aspirated street car. “I had three goals,” said Doc. “I wanted to be in the sevens every day, I wanted a seven-second average, and I wanted to run 170mph – I only got one of those things: the 170mph pass. But I think we’ve got everything solved now and the car will go quicker. I think it will go 7.70 at 172mph.” 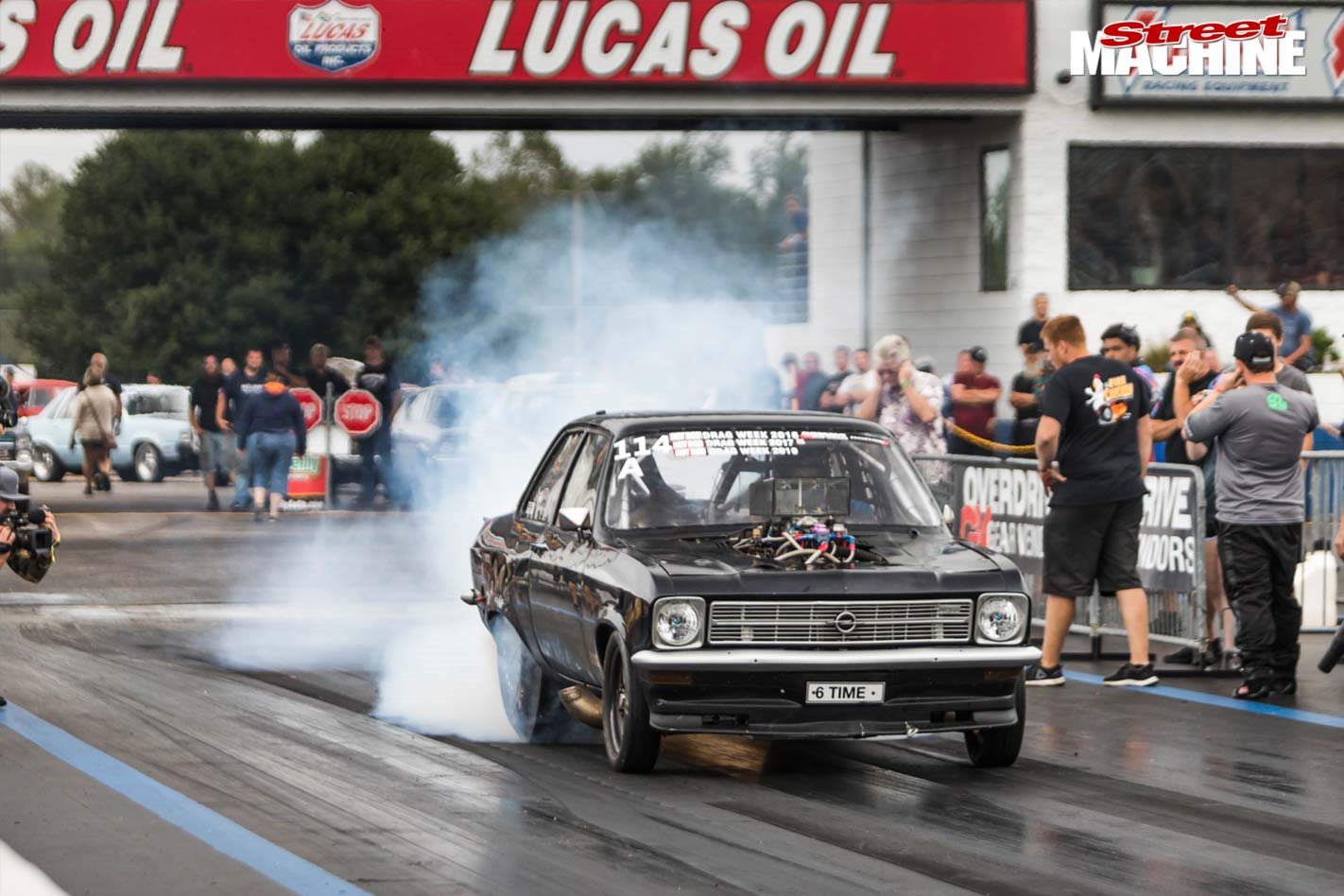 4. It’s a miracle that Robin Johannesson was able to run a seven-second pass every day at Drag Week and finish third in the Unlimited class, considering the problems that plagued his nitrous big-block ‘OG Ascona’.

“I don’t know where to begin,” said Robin after collecting the Spirit Of Drag Week award. “The thing I remember right now is that last pass. Last night we had another broken lifter; actually, the roller was welded together with the lifter and it was also stuck in the sleeve. The camshaft lobe was hitting on it and it was destroying the camshaft and the bearing. So Dennis [Klangebo] came up with the brilliant idea to put in new lifters and hang it up with wire so we could travel the final 10 miles to the hotel on seven cylinders. We pushed it to the starting line knowing we would probably only get one run, and it went 7.85@171mph.” 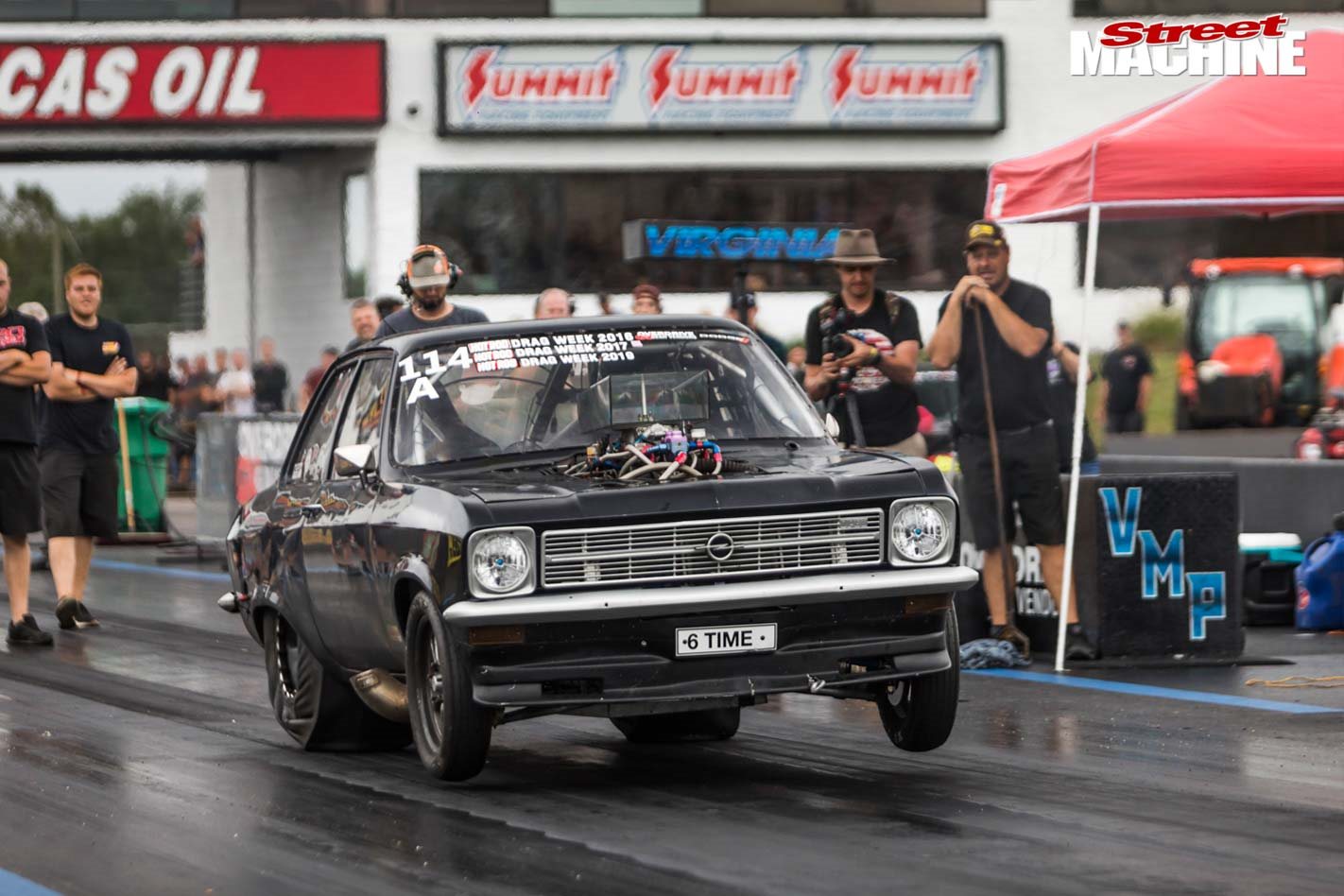 5. Mark Friedrich from New Jersey has owned his matte-finished ’69 Camaro for five years. LS-powered and force-fed by twin 85mm BorgWarner turbos, backed by a Powerglide and nine-inch with 3.25 gears, it’s capable of mid-sevens on leaf-spring suspension and 275 radials. 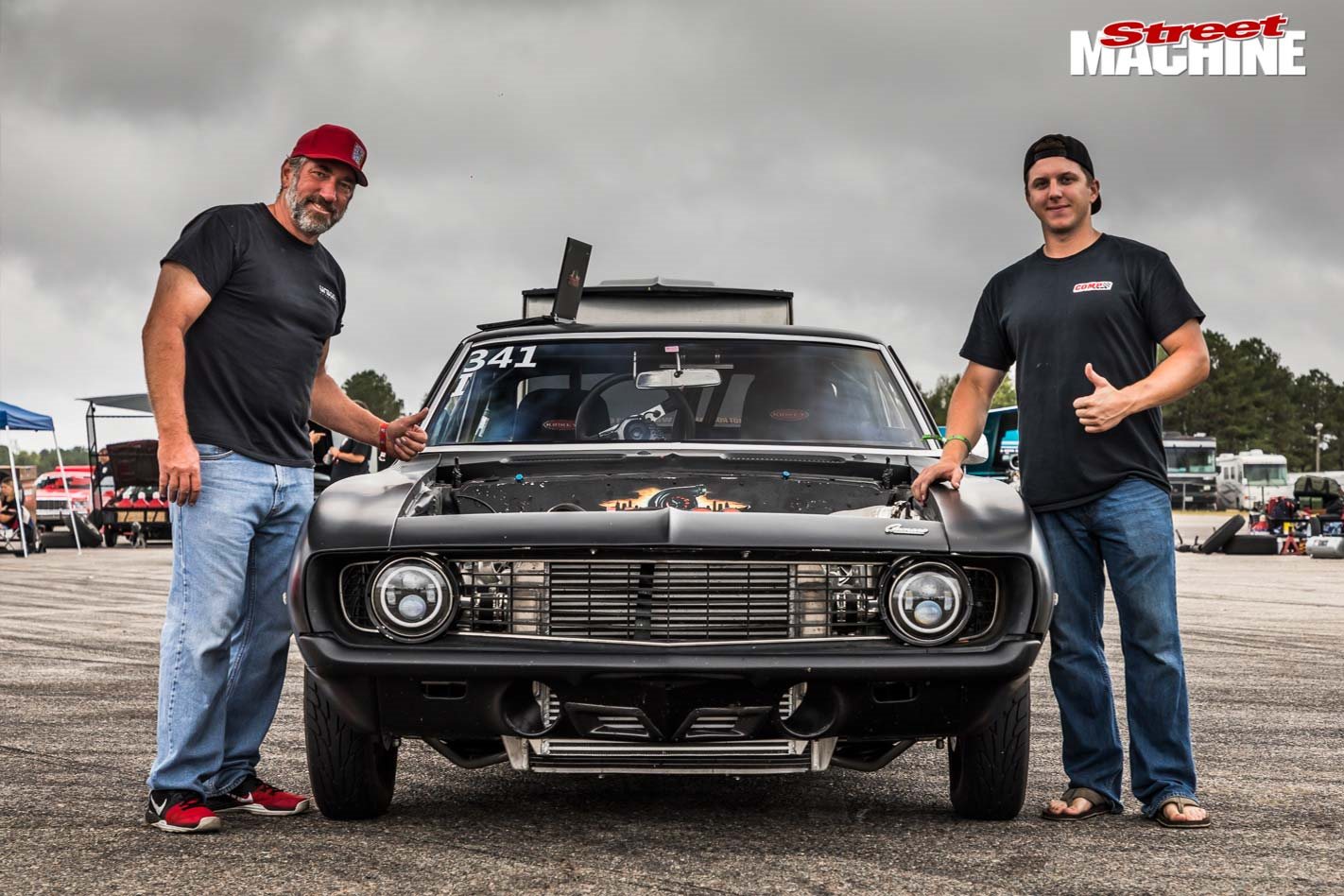 The car ran high sevens and low eights at Drag Week, except for Day One, where Mark’s average was ruined when the car shut off due to an issue with the trigger wheel and coasted to a 17.25. “We came here to complete the week and lay down some seven-second passes, so that was the big thing, and we’re having a good time,” Mark said. 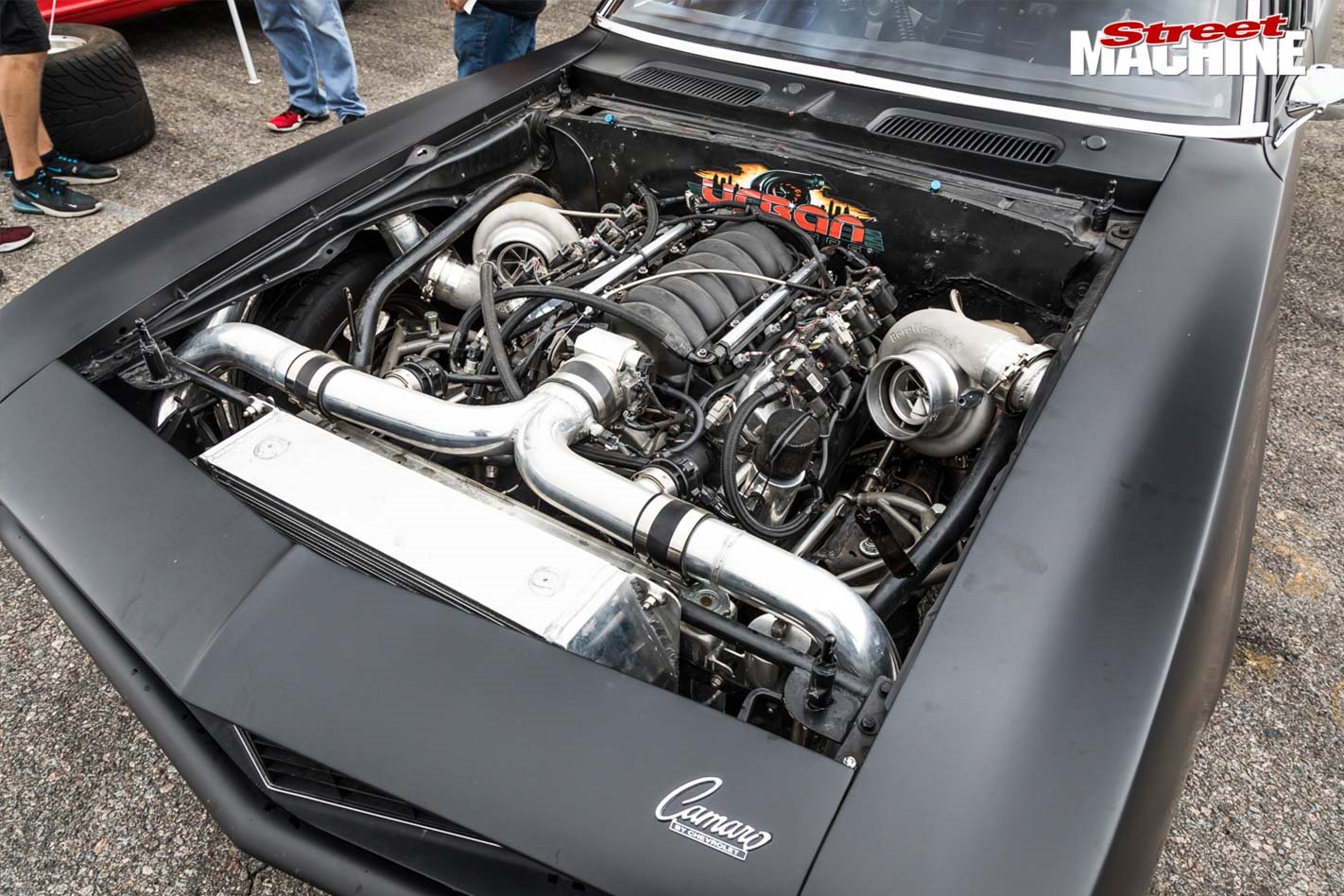 The car received a new fuel pump during the week, and had its lifters changed in a parking lot. “But that’s part of the fun,” said Mark. “If you’re not in there wrenching on it and taking it all apart, you’re missing part of the experience.” 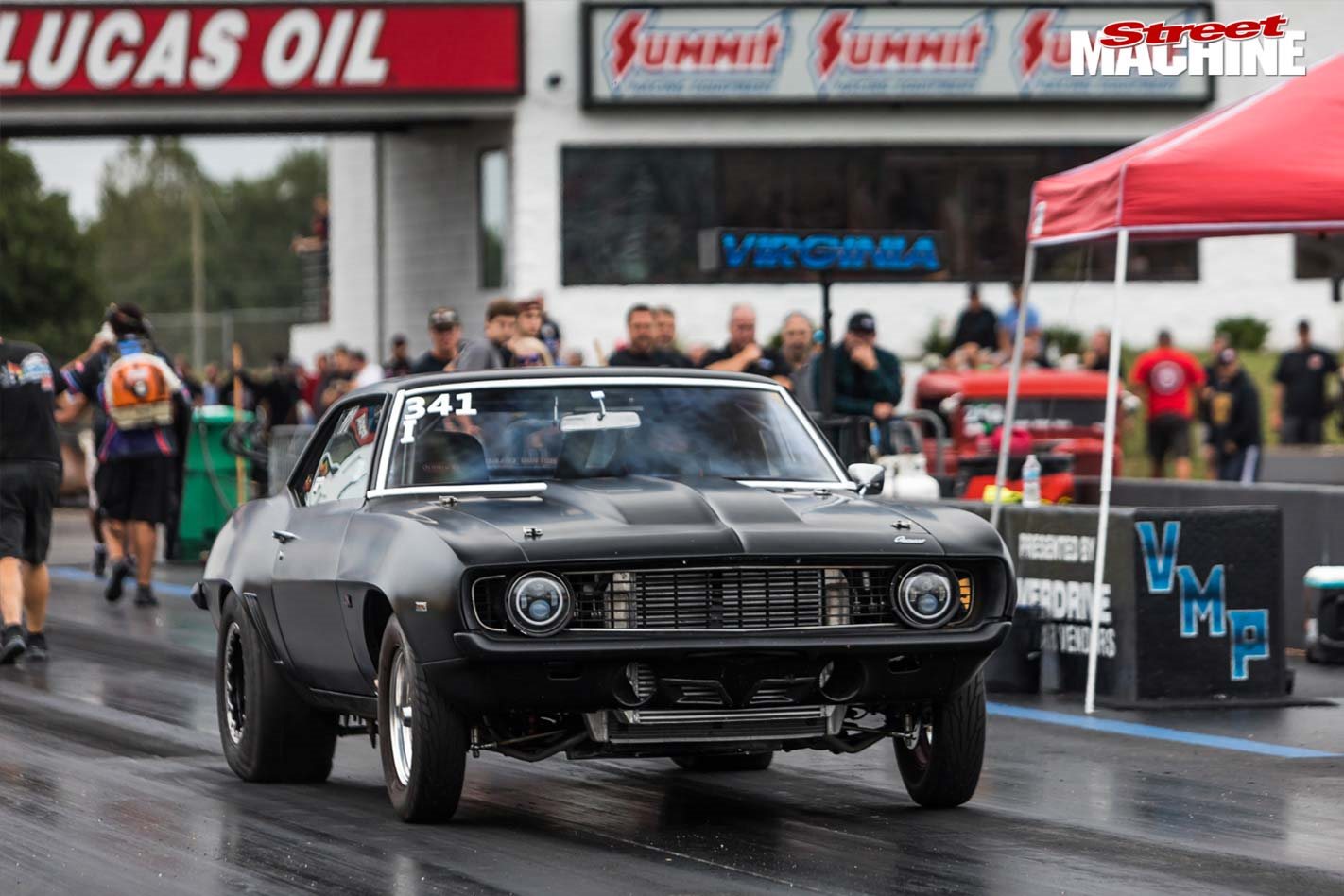 6. From Owasso, Oklahoma, Dale Gebhart’s ’76 AMC Gremlin X is an evil little nugget that has now completed six Drag Weeks. The engine is a 580ci big-block Mopar making 850hp, enhanced by a 300hp shot of nitrous, with Indy 440-1 heads, a tunnel ram and dual 750 carbs. Behind it is a transbraked Powerglide and 5000rpm stall converter, with a Dana 60 rear end. 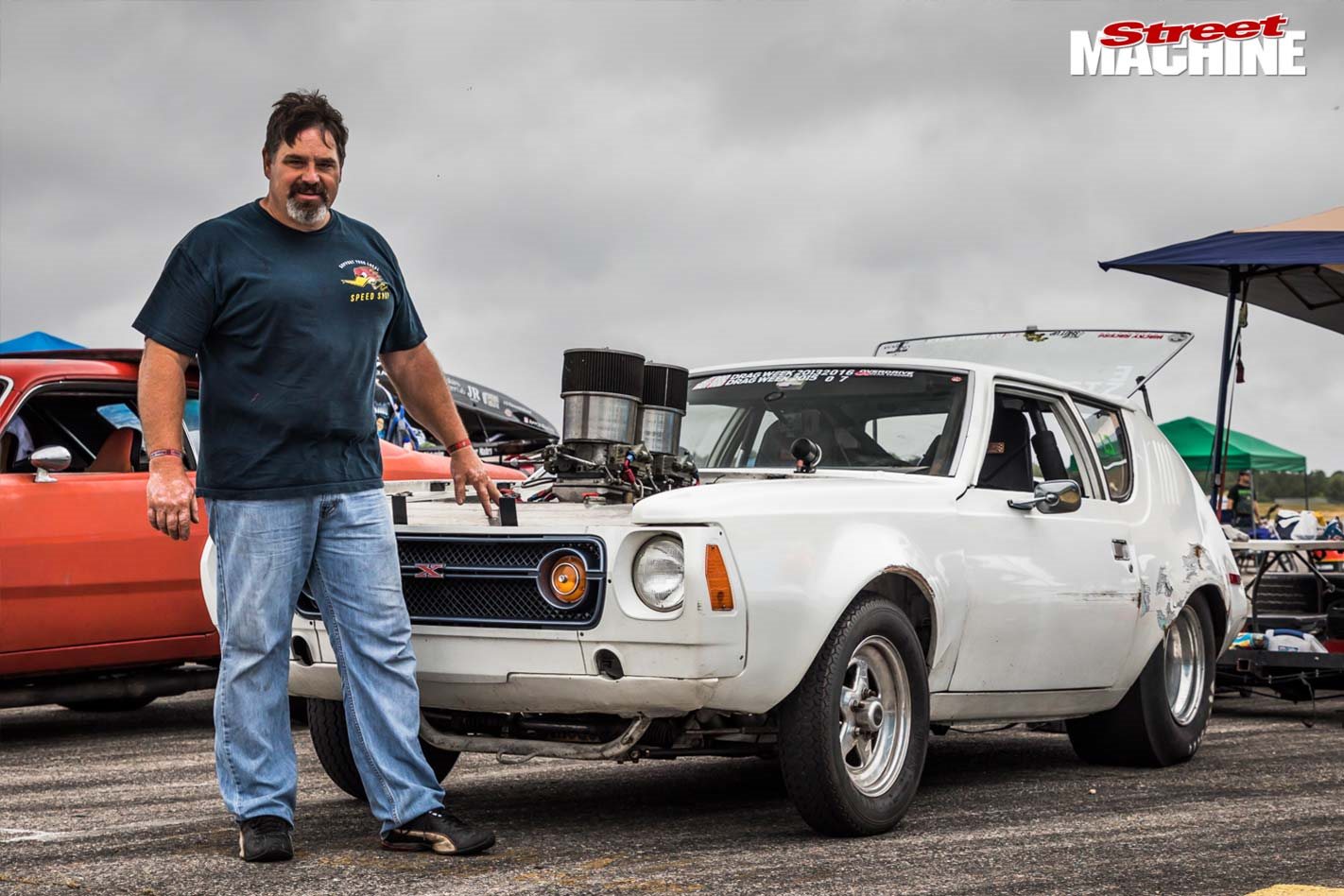 “I’m happy with how it’s been running this week, but it struggled for traction on the first two days and only ran nines,” said Dale. “It’s running really good on the top end, just couldn’t get out of the hole.” 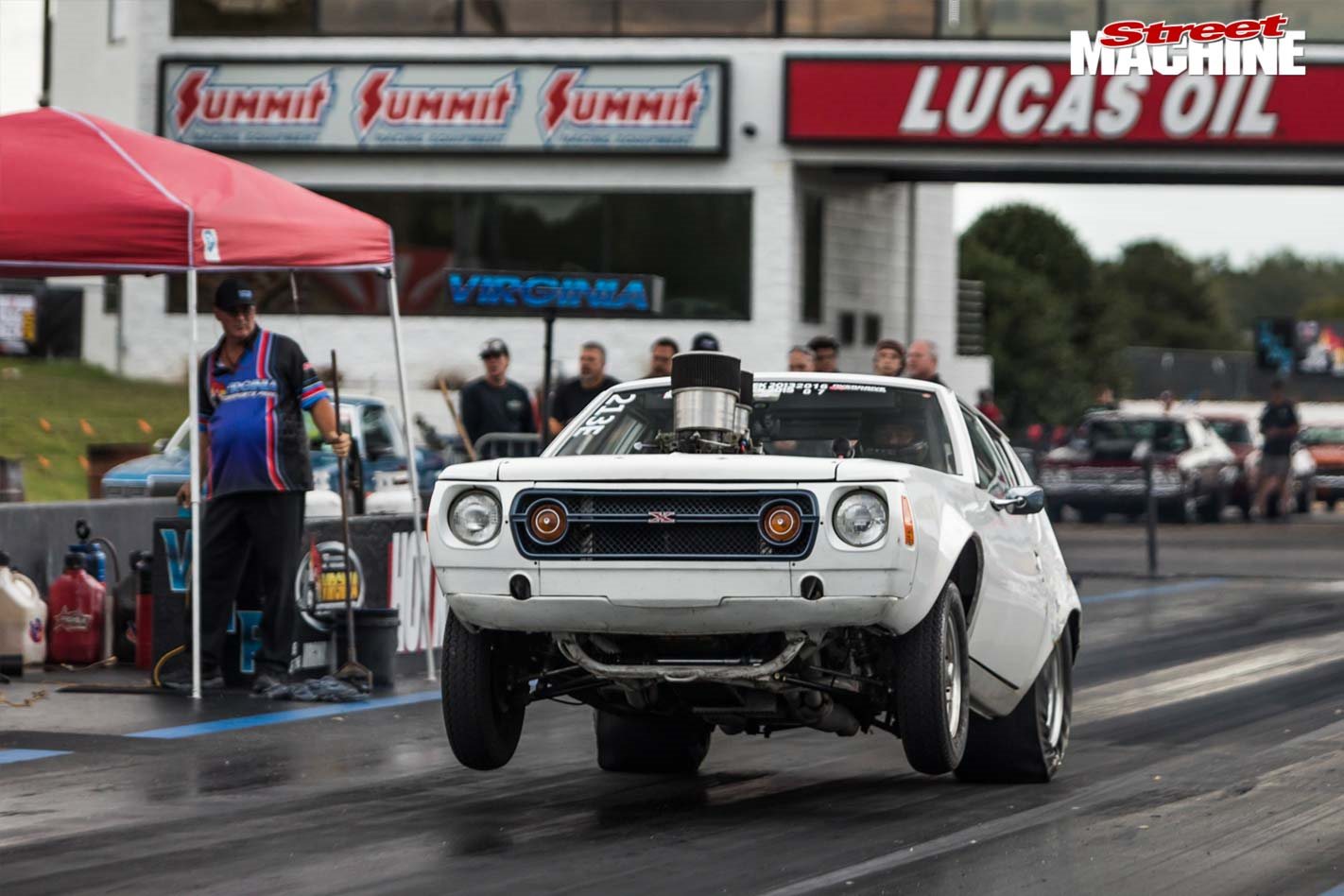 Dale was battling with Aussie Ben Neal in the turbo Barra Cresta for third-place honours in the Modified Power Adder class. Unfortunately for Dale, he ran a blistering 8.48 on Day Five but was unable to hand that timeslip in due to the Gremmie only being certified to run as quick as 8.50. He ended up posting a 8.62@162mph, which was not enough to beat the Cresta’s best time of 8.61. Still, cool car, bro. 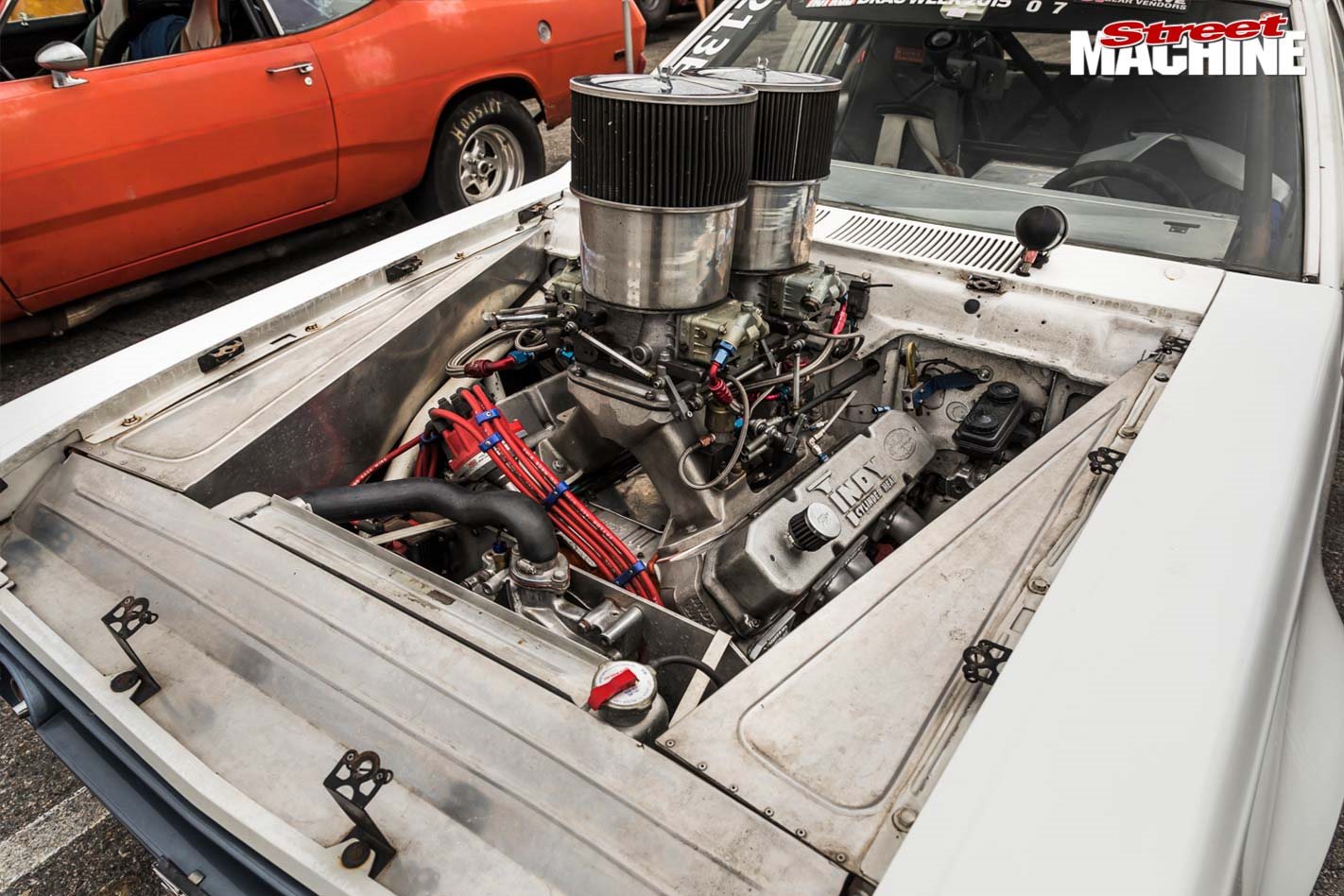 7. It took Dennis Sandboe four-and-a-half days to trailer his ’62 Mercury Comet all the way from Grand Prairie, Alberta, Canada for the start of Drag Week 2019. The Comet was built into a race car in 1988 by Spirit Race Cars in Vancouver; Dennis bought it in 2000 and gave it an overhaul. It’s now got custom-made fibreglass panels all over it, including the bonnet, boot, doors and bumpers.

The motor is a bored and stroked 383-cube Cleveland with Pro Comp aluminium heads, Pro Comp intake and a 750 double-pumper carb, which is fed a 150-shot of nitrous right off the hit. “It’s pretty good on the highway, but it runs hot,” said Dennis. 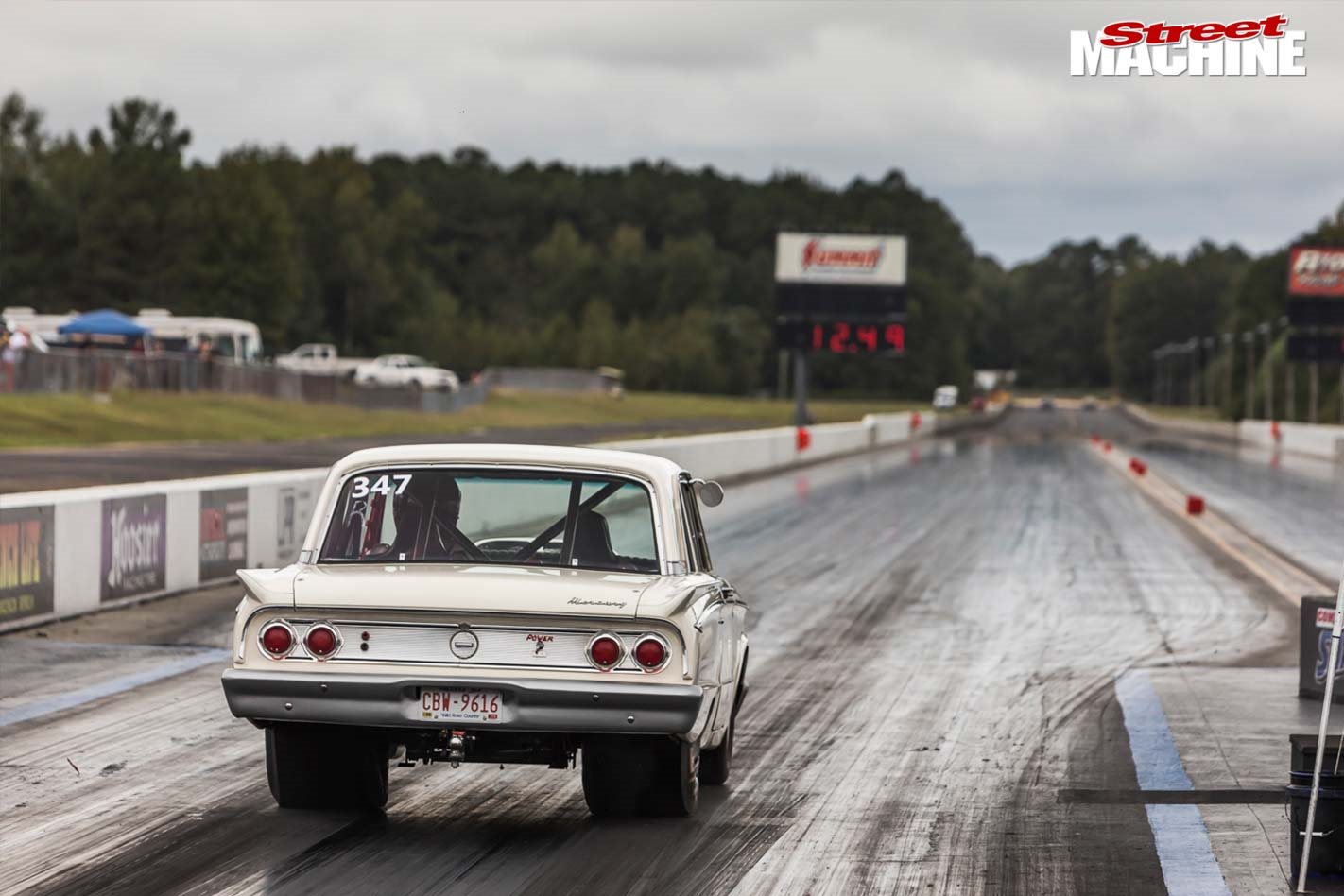 The nitrous plate gave him trouble all week, and on the drive from Cecil County to Atco after Day Two, the Comet was up on jacks at a service station at 2am after Dennis drove over a big hump and ripped the tranny shield off. 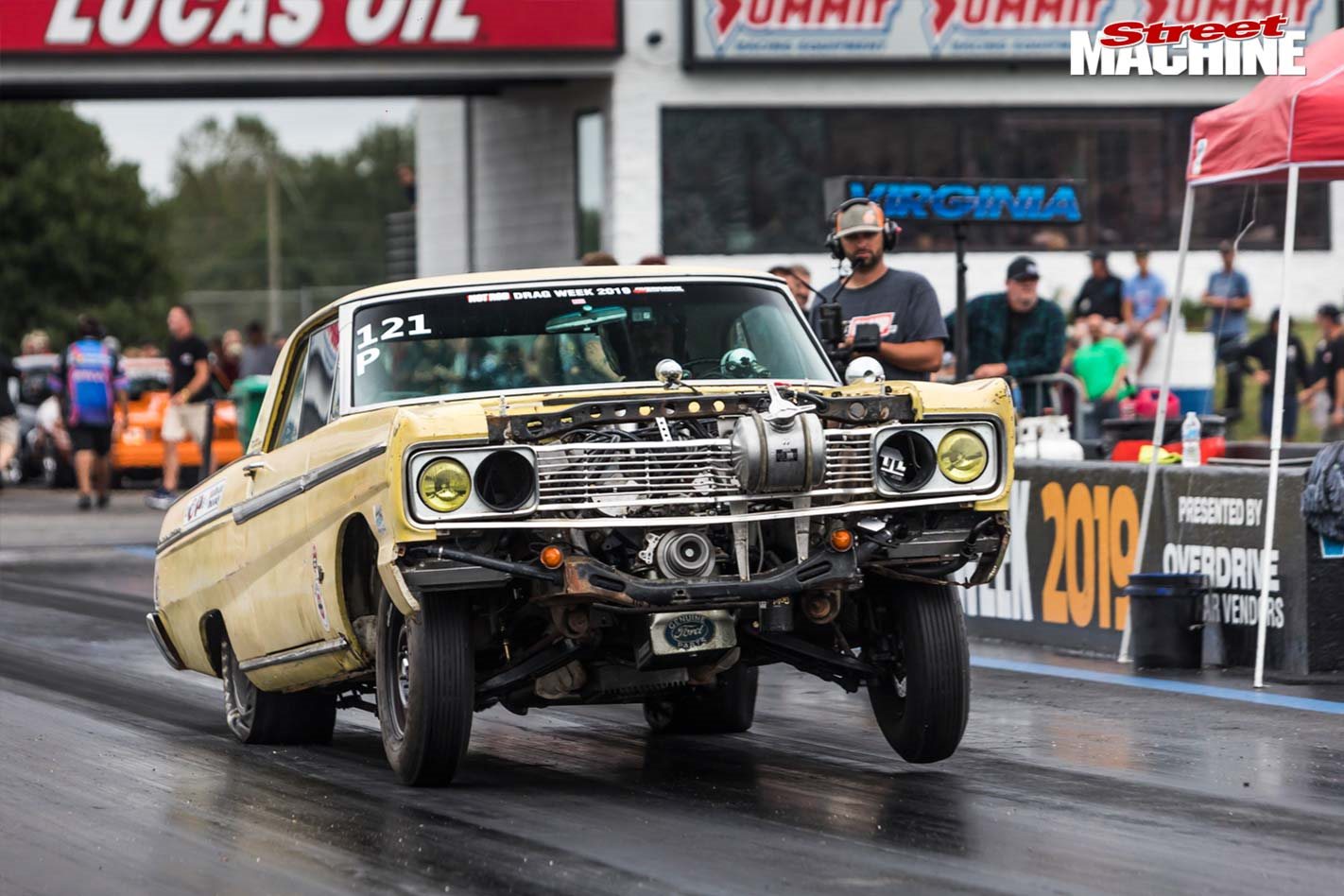 8. Mike Heston’s ’65 Ford Fairlane is named the ‘Ugly Duckling’: “One, because it’s yellow, and two, because the ’65 is like the red-headed stepchild of Fairlanes,” said Mike, who hails from Mansfield, Ohio.

The basic combo is a small-block Ford with Keith Craft 17-degree Brodix heads and Enderle mechanical injection. The tranny is a B&M AOD, which Mike put in a Silver Fox valvebody to make it easier to switch gears, with a quick-change diff out back.

The cockpit and dash fascia feature a range of switches taken from old fighter jets. “The aeroplane guys were the original hot rodders,” said Mike. “It took me five years to gather up the parts to get the right look.”

The Ugly Duckling made it to the end of Drag Week 2019, although Mike was not impressed with its times. “I don’t even want to say how slow it’s been running,” he said. “It should be an 11-second car, but this week it wouldn’t have gone fast even if it fell out a tree.” 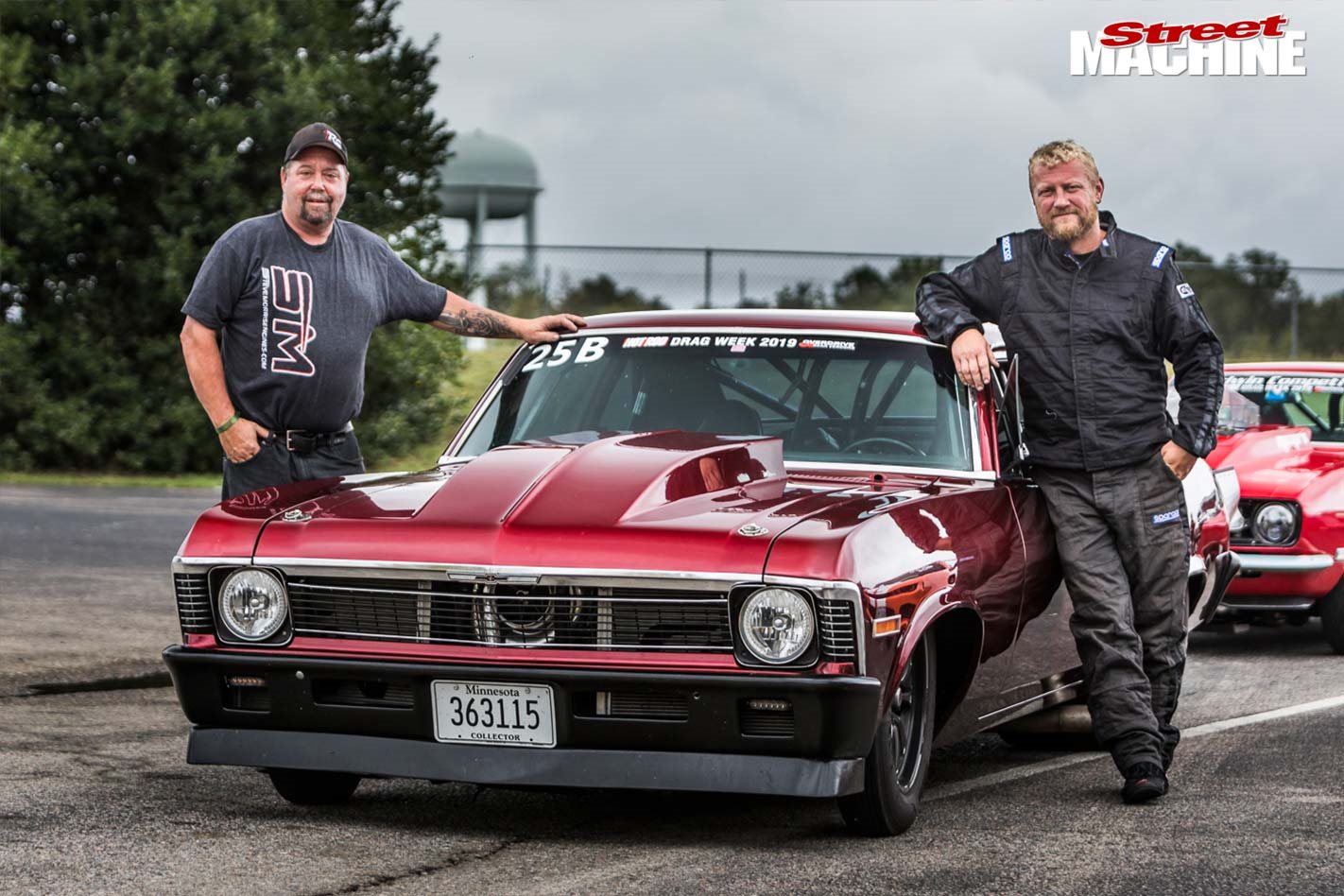 9. Street burnout king Craig Groebner broke the F3 ProCharger on his tough-as-nails ’71 Chevy Nova after Day Four and couldn’t find another one on short notice, so he decided to run it naturally aspirated for its final run at Virginia Motorsports Park. His time of 11.51@121mph was a long way from the mid-to-high sevens he ran on most of the preceding days, but he finished the event and claimed first place in the Ultimate Iron class, still more than a full second ahead of nearest rival and fellow Nova owner Chris Ingle. 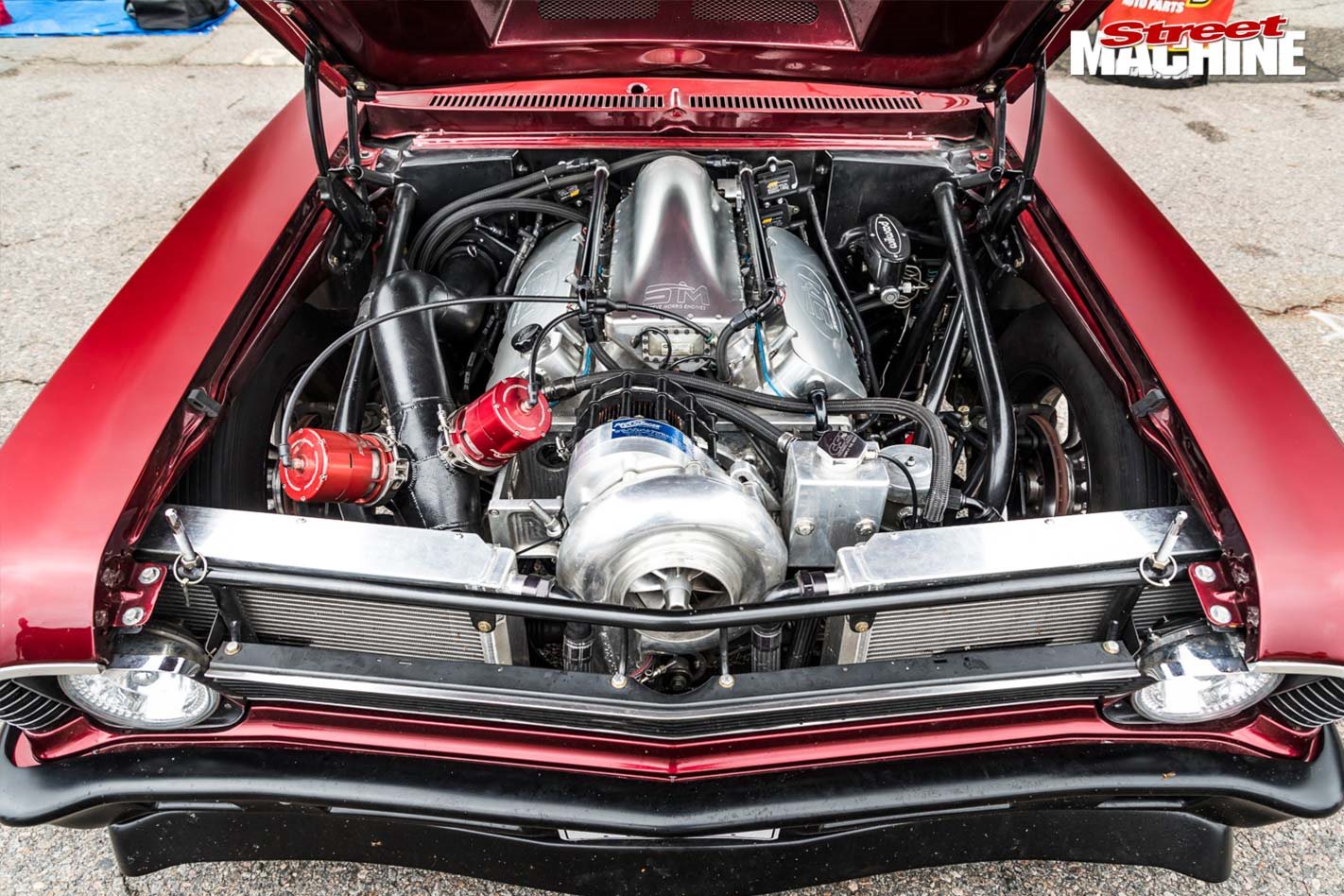 10. Bryan Anders from Inwood, West Virginia races his plucky wheels-up ’77 Chevy Chevette hard and often. Powered by a 427ci small-block with a Turbo 350 trans, the car’s PB is a 9.59, but the aim for its first crack at Drag Week was not to set any records but just to make it through the week. “Today was a 10.09@131mph, which is around where I want to be to get through the week,” said Bryan on Day Two at Cecil County, Maryland. “If I can get 10.0s the rest of the week, I’ll be thrilled to death.” 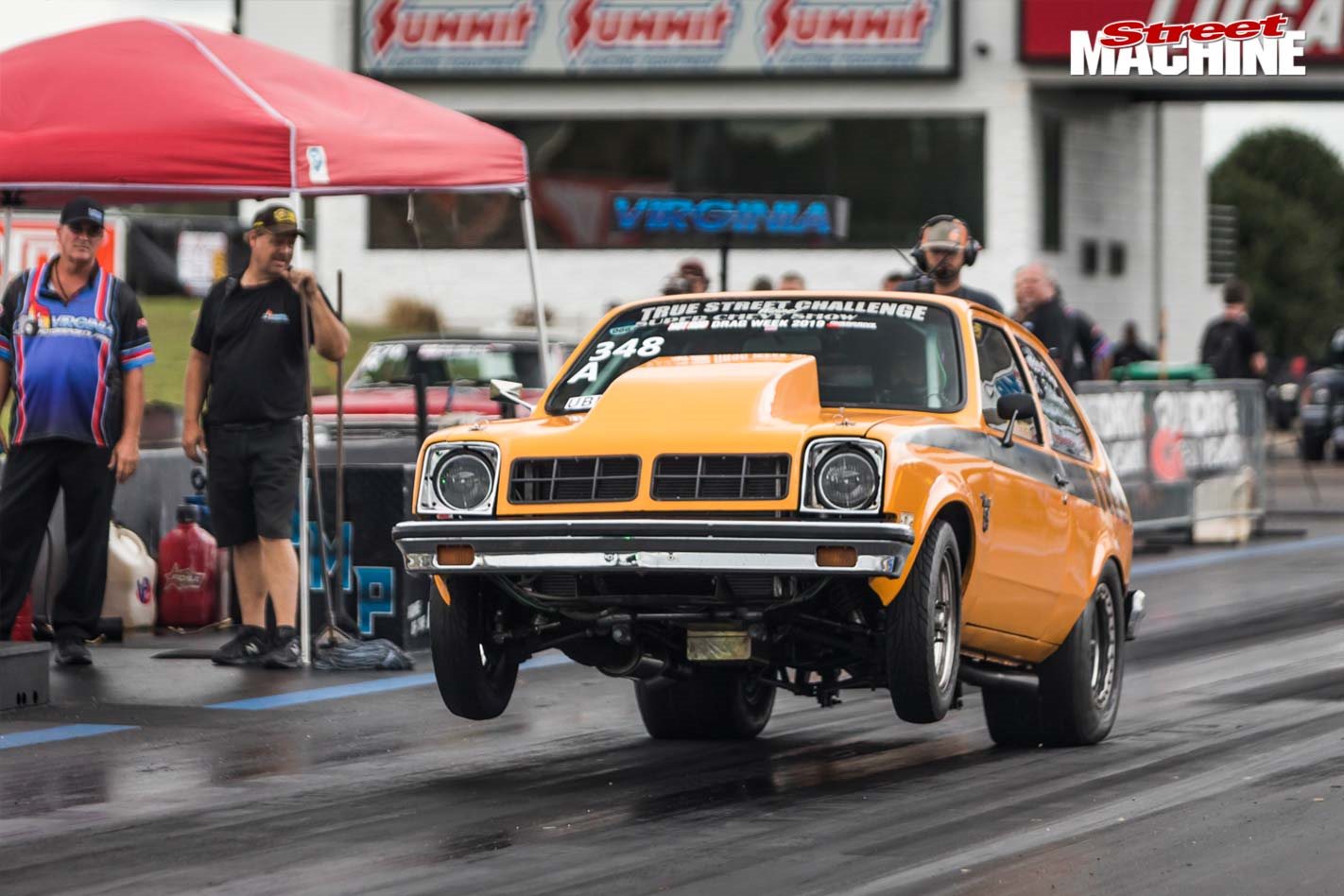 Bryan needed to replace the starter motor and flywheel on Day Three at Atco, New Jersey, but he achieved his goal of 10s every day and got the Chevette to the end of Drag Week with a healthy average of 10.241. 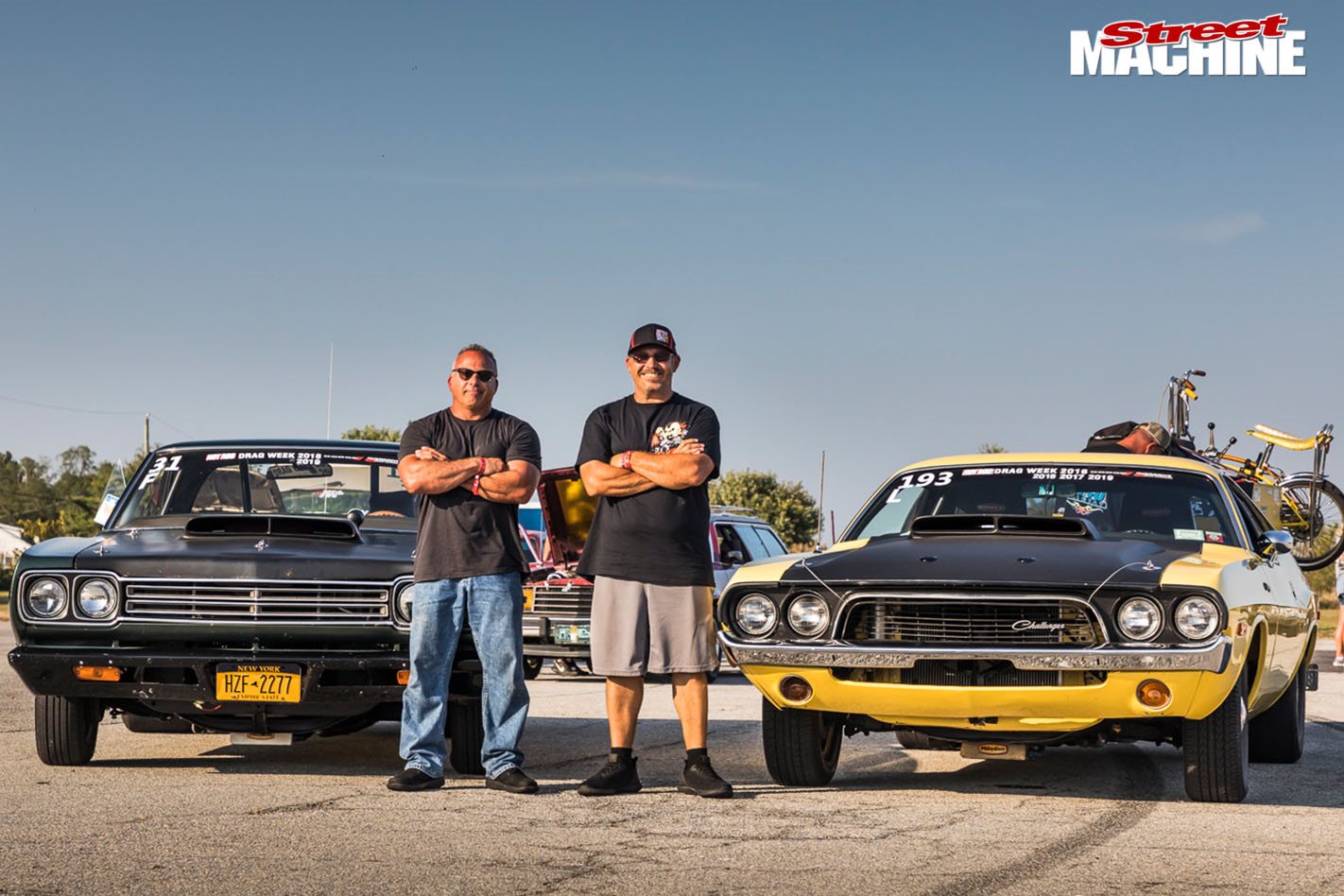 11. Joe and Paul Castiglione are a couple of Mopar disciples from Long Island, New York. Drag Week 2019 was a tale of mixed fortunes for the brothers. Paul’s 10-second ’72 Dodge Challenger, dubbed ‘The Russel Mobile’, lunched its transmission at Maryland International Raceway on Day Four. “We had a transmission meltdown and [there’s] no way I can make it to the last day,” said Paul. “We’re still rolling to the end for the festivities though.”

Joe, however, had a fantastic week in his super-cool ’69 Plymouth Road Runner. He pushed the car to a new PB of 10.74@123mph on the final day and finished second in the Modified NA class. But he reckoned his highlight was being featured on Street Machine’s website earlier in the week. “My daughter sent me the link,” said Joe. “Forget about trophies; the fact that you Aussies included our cars means so much to me.”