HOT Rod Drag Week 2019 got off to a soggy start, with rain falling early and often on Day One at Virginia Motorsports Park. It was touch-and-go as to whether the day’s racing would be completely rained out, but around 11am the weather began to clear up and the track preppers sprang into action drying and spraying the surface. After a good effort by them, racing got underway at midday, but the rain delay meant each car was only permitted to have one run. No pressure!

The five Australian teams and cars were among the first in the staging lanes. Harry Haig and Robby Abbott lined up alongside one another for the very first pass of the event – Harry in the right lane in the Aussie Chevelle and Robby in the left lane in the Malibu he is sharing with Harry’s son, Corty. Both looked amazing as they ran PBs for their respective cars – an 8.68@157mph for the Chevelle and a 10.29@131mph for the Malibu.

“I put that all down to suspension changes and the brilliance of Terry ‘The Terminator’ Seng,” said Harry afterwards. “I didn’t really do much; I just drove. We emailed the data from yesterday’s test pass to Terry in Queensland; he made the adjustments and sent us a tune back that we loaded into the computer and that’s how it did it. He knows his shit, that Terry.” Next up among the Australians was Ben Neal in the Cresta, who also went away happy with a 9.09@148mph. 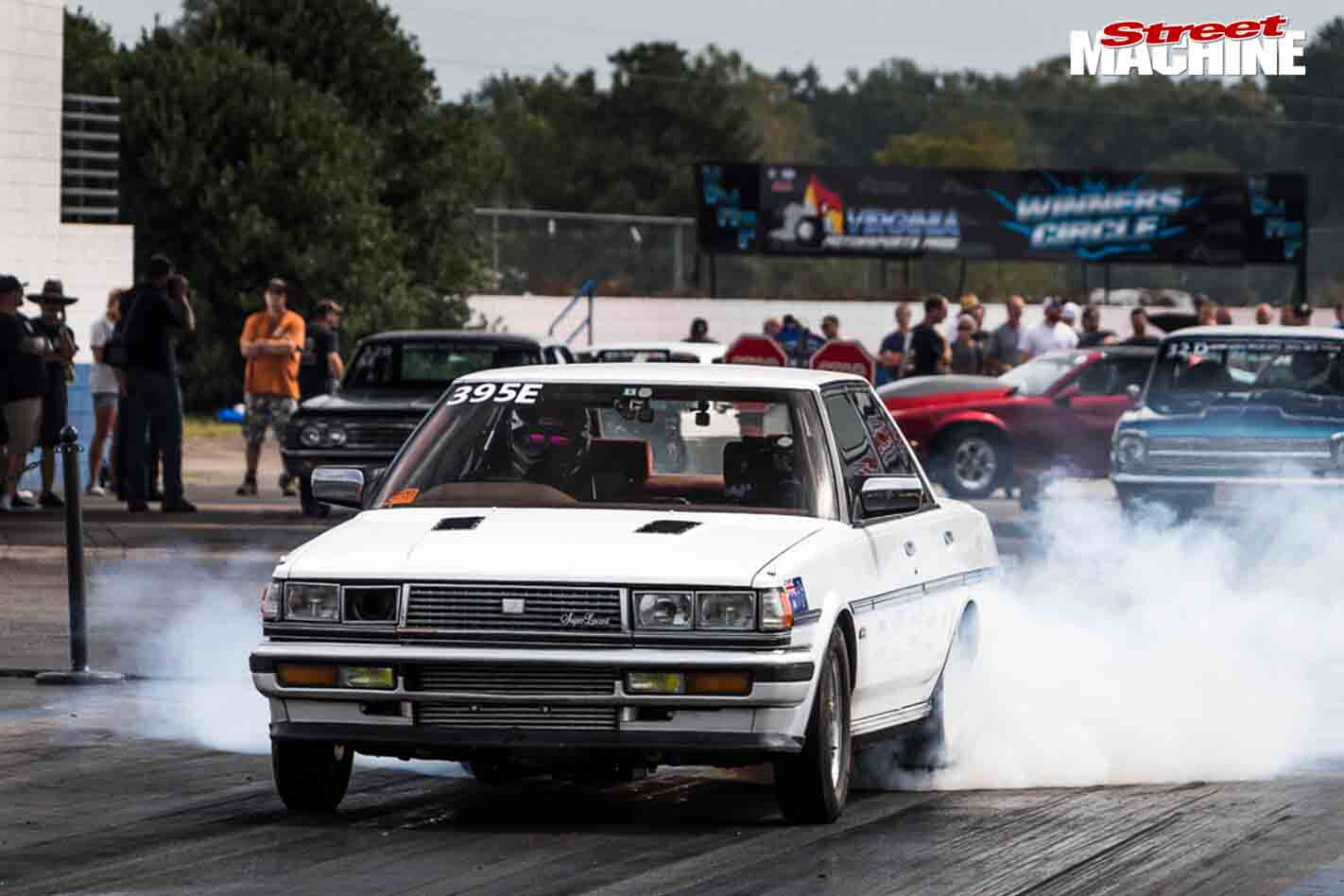 Not far behind him in the queue was his Barra brother Ben Paganoni, who raced the new and unproven Fox-body Mustang package straight into the eights with a barely believable 8.93@156mph. There were high-fives all ’round among the two Barra crews before they quickly packed up and hit the road together around 1:30pm. The final Aussie-owned car out on track was the ’55 Chev of Ross and Brenton Gault, who didn’t have as good fortune as the others. With Brenton behind the wheel, the big blue Chev got off the line well, but seemed to fall over around half-track and finished with a 12.00@114mph – a long way from the 10s it is capable of running. Brenton put the problem down to the fuel pump. “I think the pump is just not feeding it enough,” he said. “It did the same thing every pass last year, but not as bad as this. Even if we were allowed to go out for a second run today, I don’t think it’d improve much.” 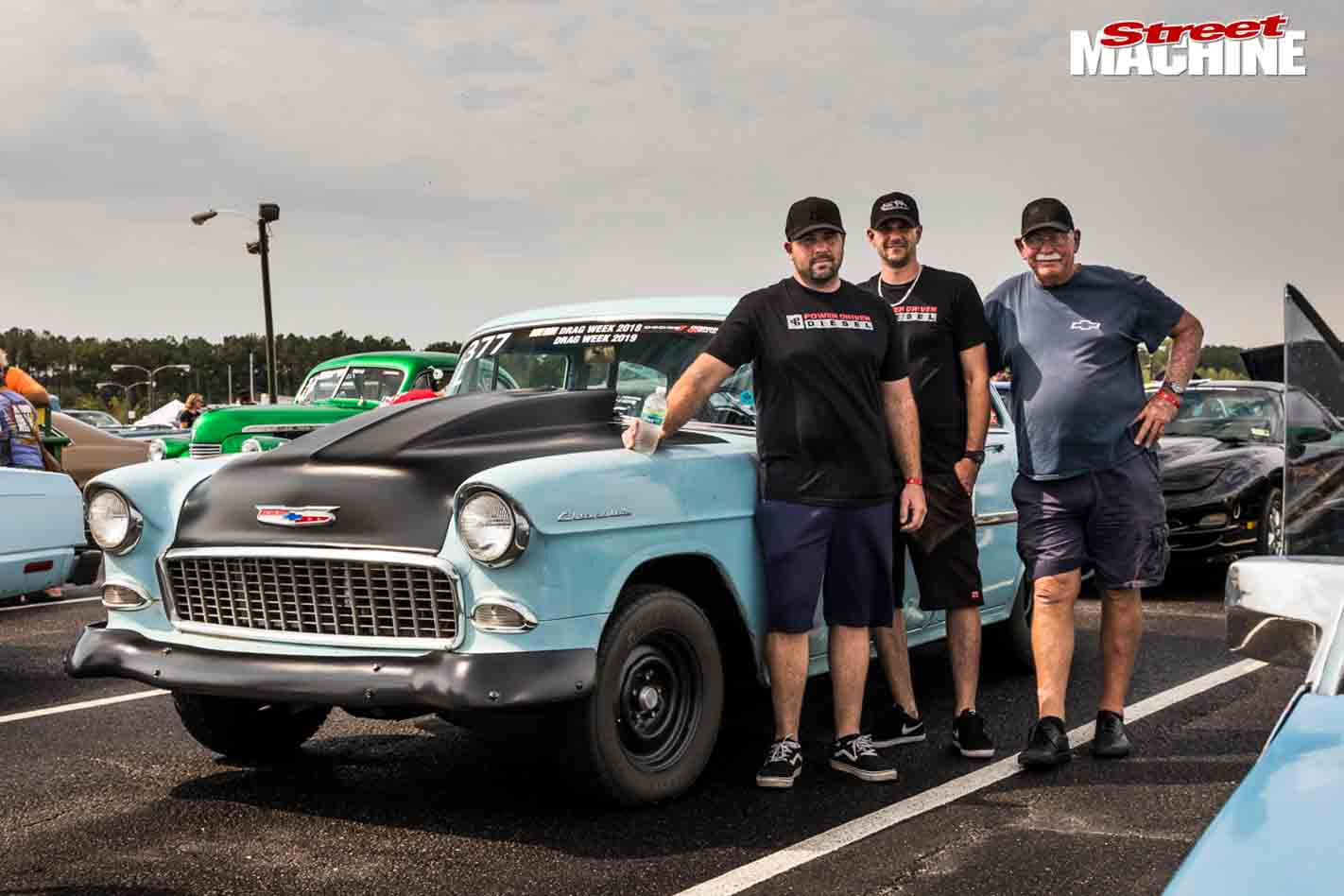 Just after 1pm, the Malibu was back in the staging lanes and co-driver Corty Haig was hoping to get his first Drag Week pass in. Unfortunately, the event staff denied him a chance because the Malibu had already made a pass with Robby driving. It turned out to be a moot point anyway, because when Corty tried to start the car up and drive away, the starter motor sheared a bolt and the wagon needed to be pushed back to the pits where the crew made the necessary repairs. 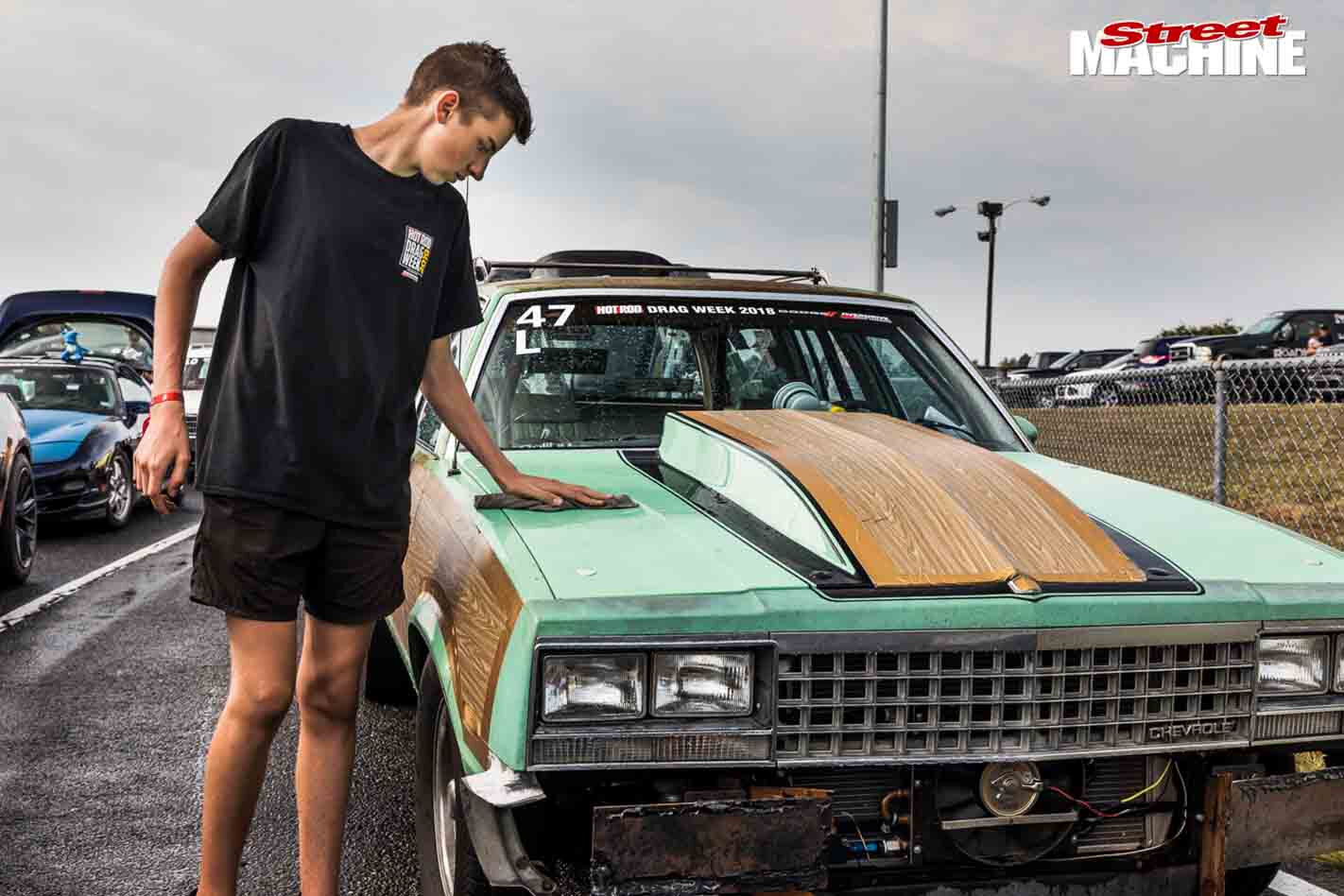 Of course, there is much more to Drag Week than the Aussie teams! Here's some other highlights:

Sweden’s Magnus Frost put Drag Week’s heavy hitters on notice when he set down a blistering 6.43@230mph in his highly modified Opel Ascona. Not to be outdone, reigning champion Tom Bailey came out soon after and laid down one of the fastest passes in Drag Week history, a 6.21@228mph, in his ’69 Camaro. Third quickest for the day was Bryant Goldstone, who went 6.93@215mph in his AMC Javelin. This ’65 Mercury Comet is owned by Christian Griffin from South Carolina, and it’s a budget build with some nice gear underneath that nasty exterior. It runs a mostly stock 460ci Ford big-block with a 14L Cummins truck turbo, and on Day One it ran 10.42@127mph on 8psi. “This is the furthest I’ve ever driven the car,” said Christian when the SM team caught up with him at one of the mandatory stops on the way to Cecil County, Maryland. “So far so good. I haven’t had temperatures above 200 degrees, so I’m happy.” Mike Finnegan’s ‘Blasphemi’ ’55 Chevy gasser finished off Drag Week 2018 by running its first eight at Atlanta on Day Five, an 8.97@150mph, and then dropped a valve and kaboom! Since then, the car has received a new all-alloy motor and some upgrades, which Mike put to good use at Virginia on Day One, running a PB of 8.52@161mph. If he can get the Roots-blown, 528ci Hemi-powered rig doing those kinds of numbers consistently this week, he’ll be hard to beat in the A/Gas class. Clark Rosenstengel is a Drag Week regular in his 2010 Camaro, but this year he wanted to build a Fox-body Mustang, which he finished just last week. It’s got a 427ci LS Next block with Mast heads and twin 83mm Bullseye turbos. The car went 8.16@179mph on Day One, but Clark believes it potentially has a six in it. Perhaps even more impressive is the fact that it’s attempting to complete Drag Week with no trailer. “I’m planning on selling it; on Friday it will be for sale,” Clark told SM. “This was just a protest car to prove a point.” When SM ask what the point was, he said: “That anyone can build a fast car with a Mustang and LS motor.” James ‘Doc’ McIntire’s aspirated ’68 Camaro ran 8.25@169mph on Day One to assume the lead in the Pro Street NA class. “We went the fastest mile-per-hour the car has ever gone, but the driver has room for improvement,” said Doc. “I rolled into the beams too deep, deep-staged and killed the ET that we value. It will be corrected – there’ll be no more deep-staging.” The SM team saw the Camaro cruising along, and when we caught up with Doc at the first of the day’s two checkpoints, he said: “We’re rolling at around 55mph, maybe 60; I haven’t pushed it that hard. It’s been going very nicely on the street. I hope it continues.” 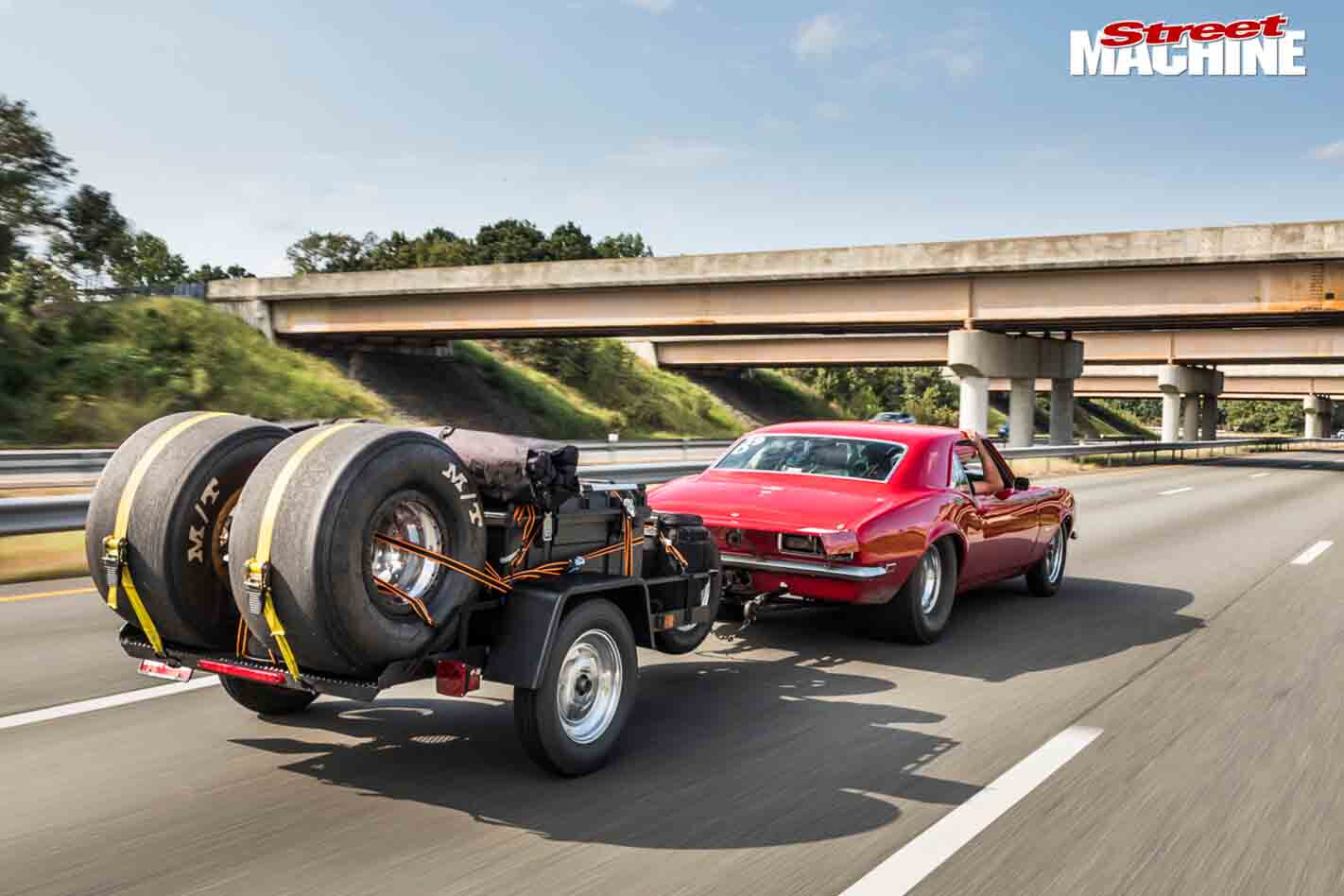