THE final day of Hot Rod Drag Week 2019 could not have been more epic if it was directed by Jerry Bruckheimer. After four days of racing in three different states and close to 800 miles of street driving, all five Australian teams made it back to Virginia Motorsports Park and finished the event.

Light rainfall in the morning delayed the start of racing by two hours, but when things finally got underway ’round midday, it was on for young and old. Cool, overcast conditions helped many cars achieve new PBs, including some of the Aussie entries. 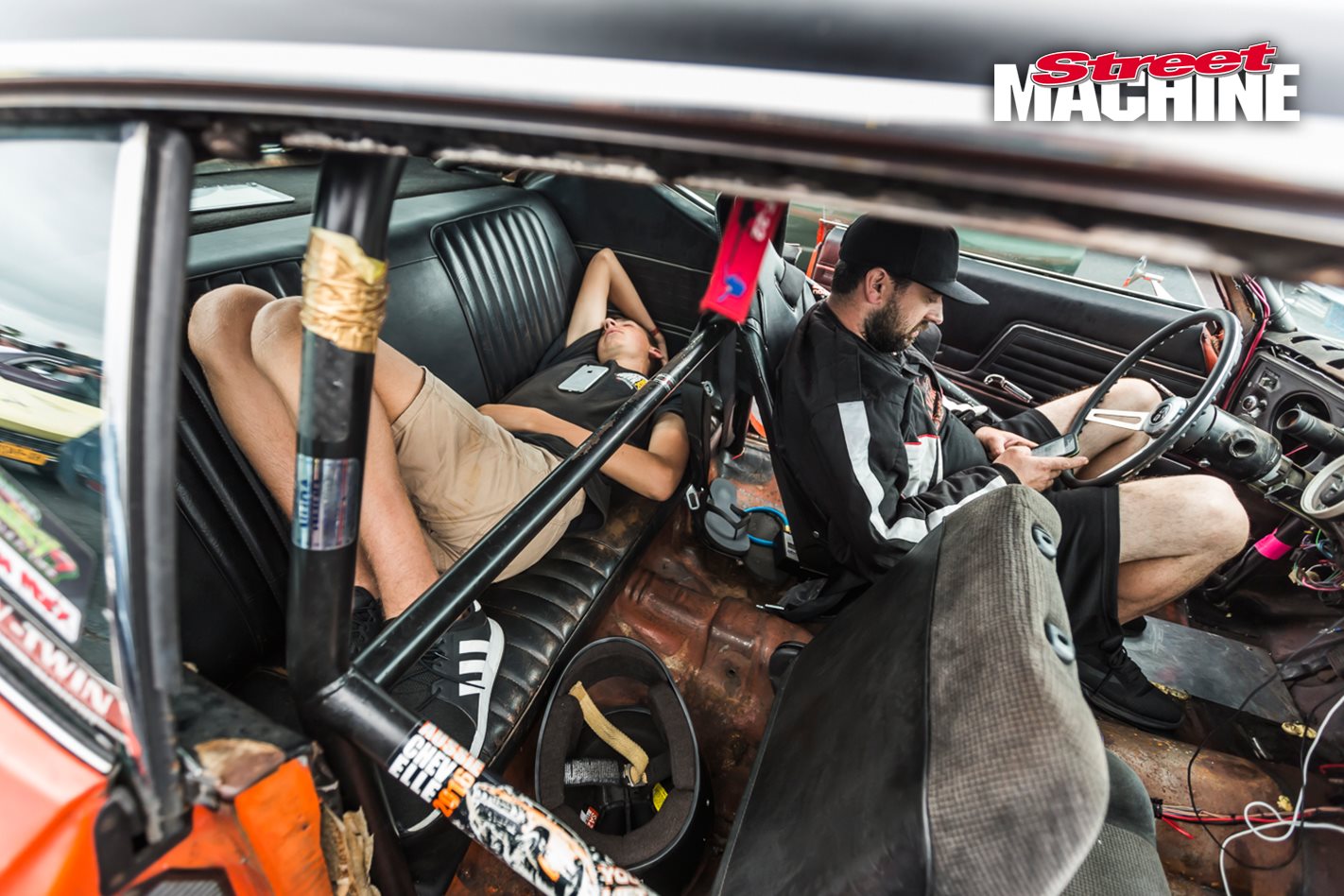 Once again, the two turbo Barra-powered cars were the first of the class cars to run, and again, both ran eights. Ben Paganoni’s Fox-body Mustang went 8.70@157mph and Ben Neal’s Cresta went 8.80@152mph. It took another couple of hours for them to get another run in, and they went one after the other, both going 8.6s. Ben Paganoni went 8.68@158mph and Ben Neal went 8.61@155mph. 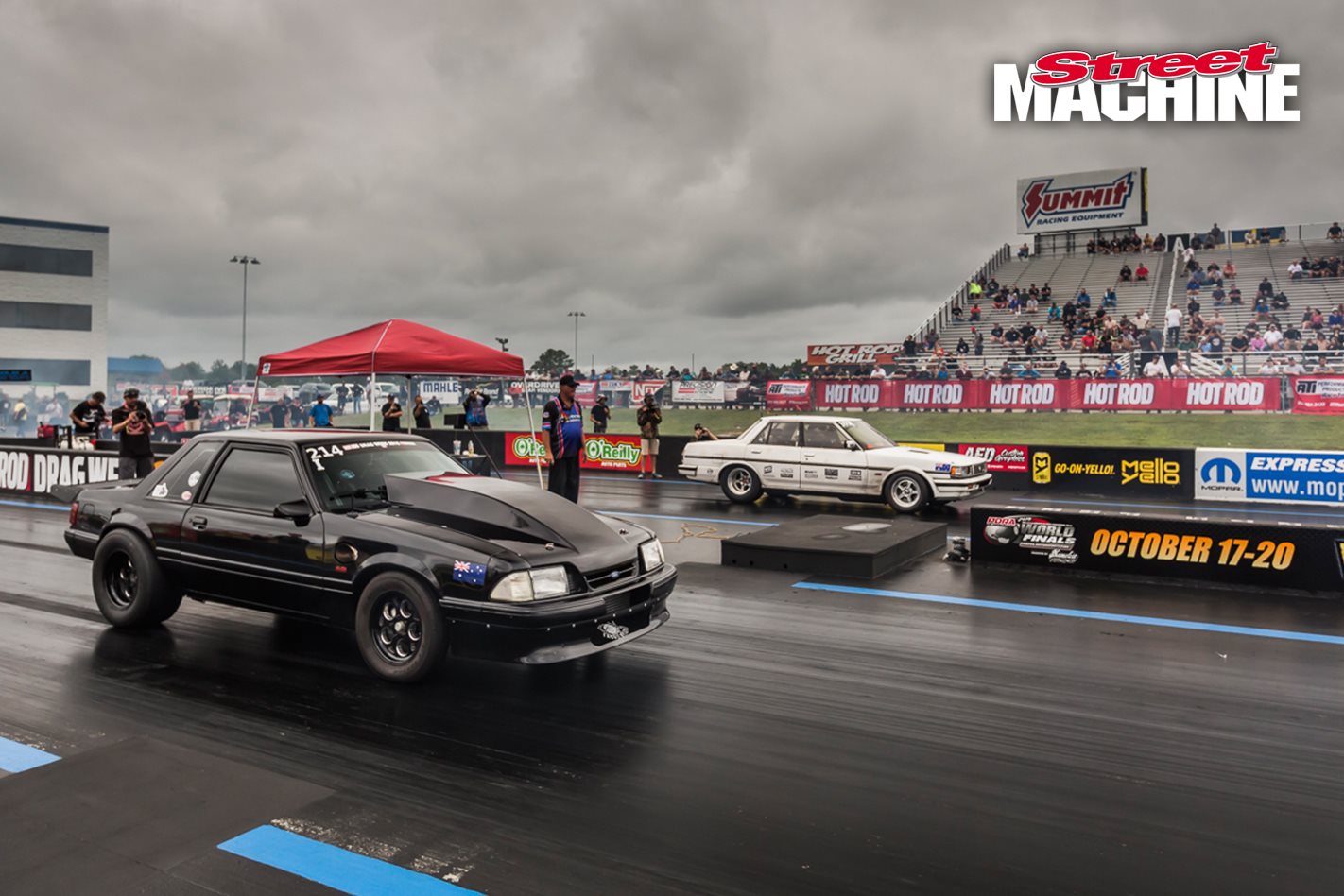 The Cresta came into Day Five running third in the Modified Power Adder class, closely followed by Dale Gebhart’s grumpy AMC Gremlin. Late in the day, the two drivers arranged it so they could race heads-up for third place. Ben got it done, going 8.64@155mph in the Cresta, while the Dale in the Gremlin could only manage an 8.79@151mph. 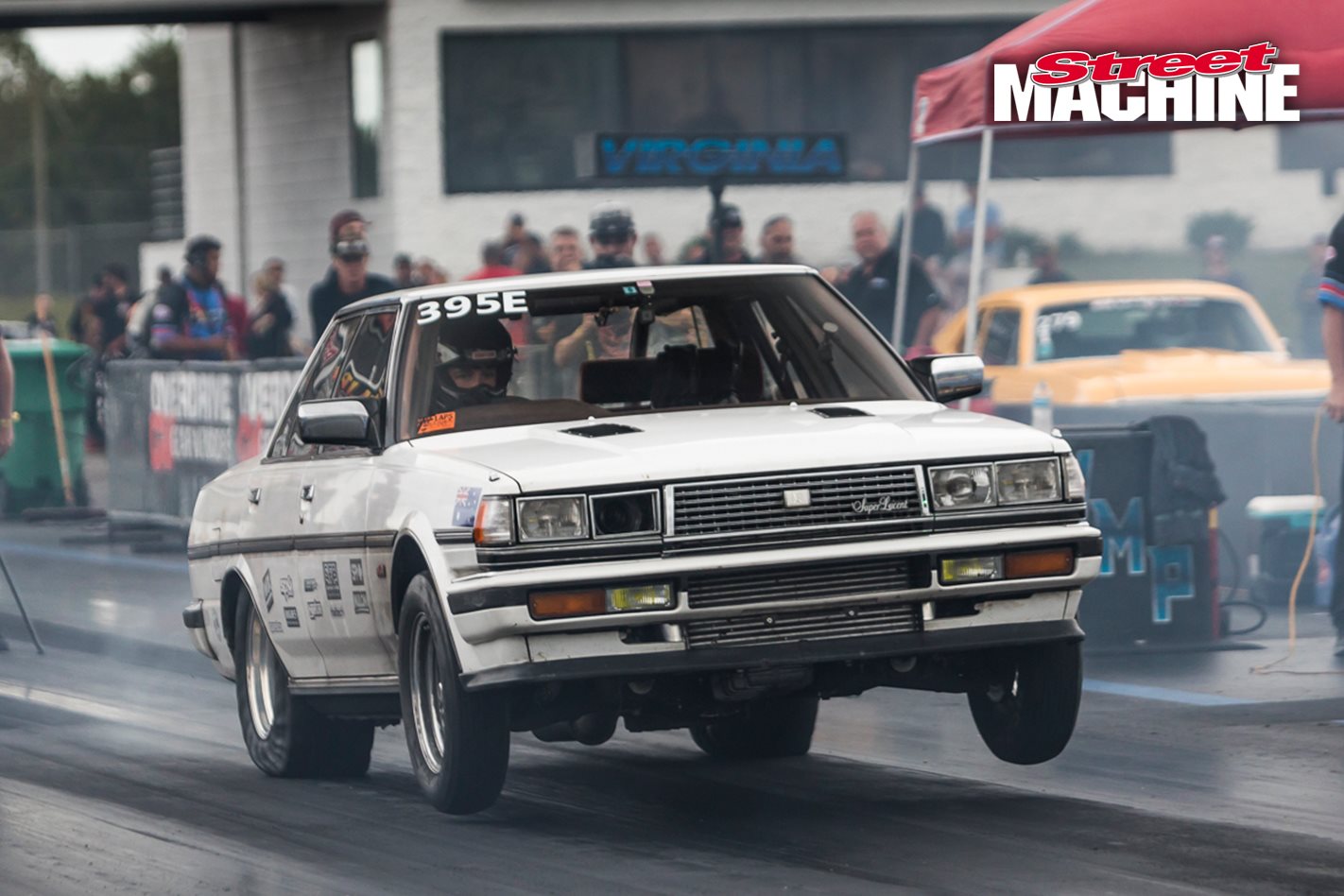 The Fox-body Mustang was up next and made its fastest pass of the day, an 8.67@158mph. To cap off an incredible week for the car and owner Ben Paganoni, they won the award for Quickest Six-Cylinder. It’s a credit to the entire Barra crew the way they managed both cars throughout the week and gradually crept up on the times. 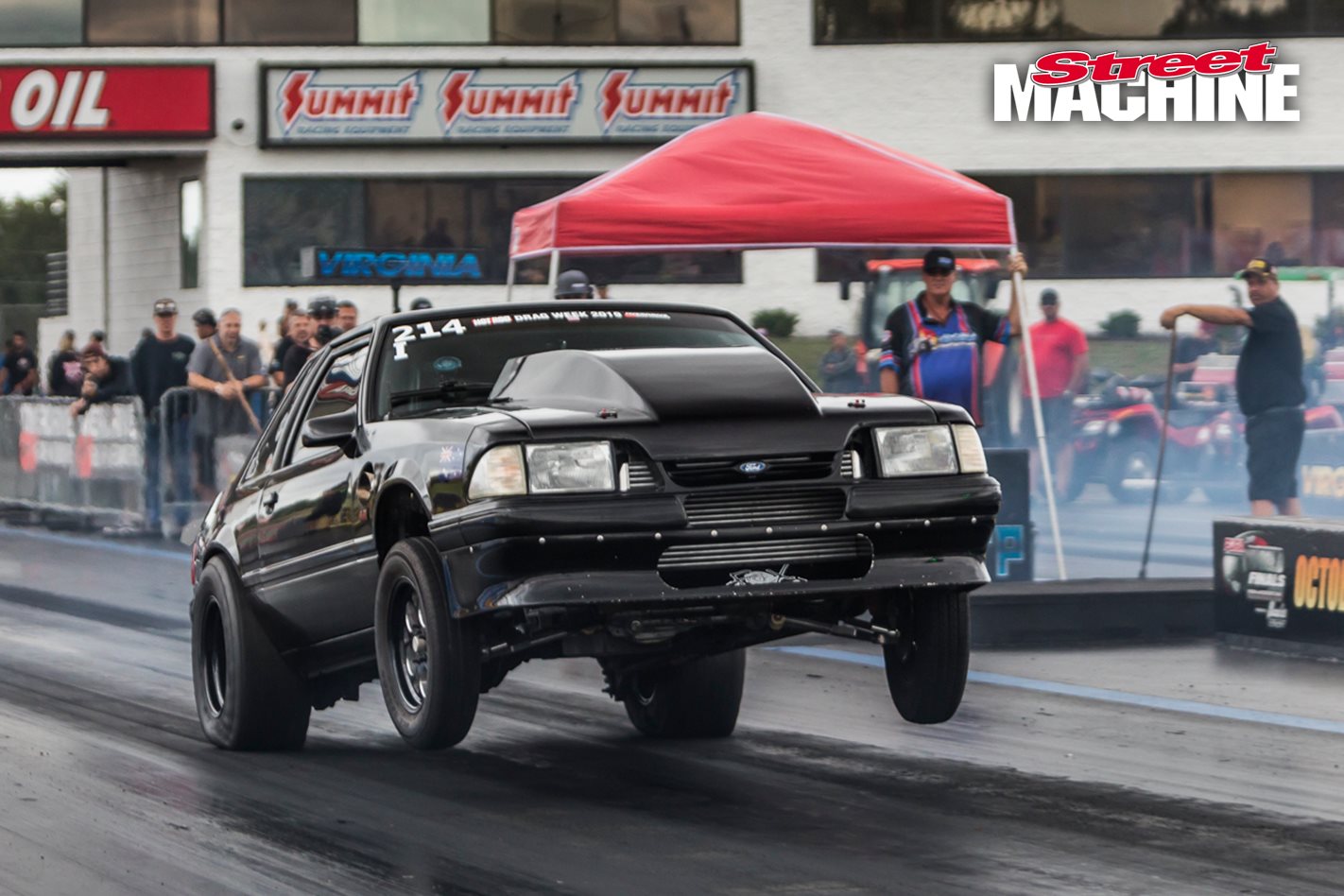 “I don’t even know how I feel right now,” said Ben Neal after collecting his award for third in class. “We dug deep and got there.”

Benny has always said he wanted the Cresta to be the first car to do Street Machine Drag Challenge Weekend, Hot Rod Drag Week and Street Machine Drag Challenge in the one year. When SM asked about him about the probability of shipping the car back to Australia in time for the start of Drag Challenge at Calder Park in November, he said: “It still runs and I’m super-keen to do it, it’s just going to depend on logistics. The thing is, we were using the old engine this week so I want to start prepping and building a new engine as soon as I get back to Australia and then as soon as the car lands, jam the motor in it, get some parts on it and do some passes." 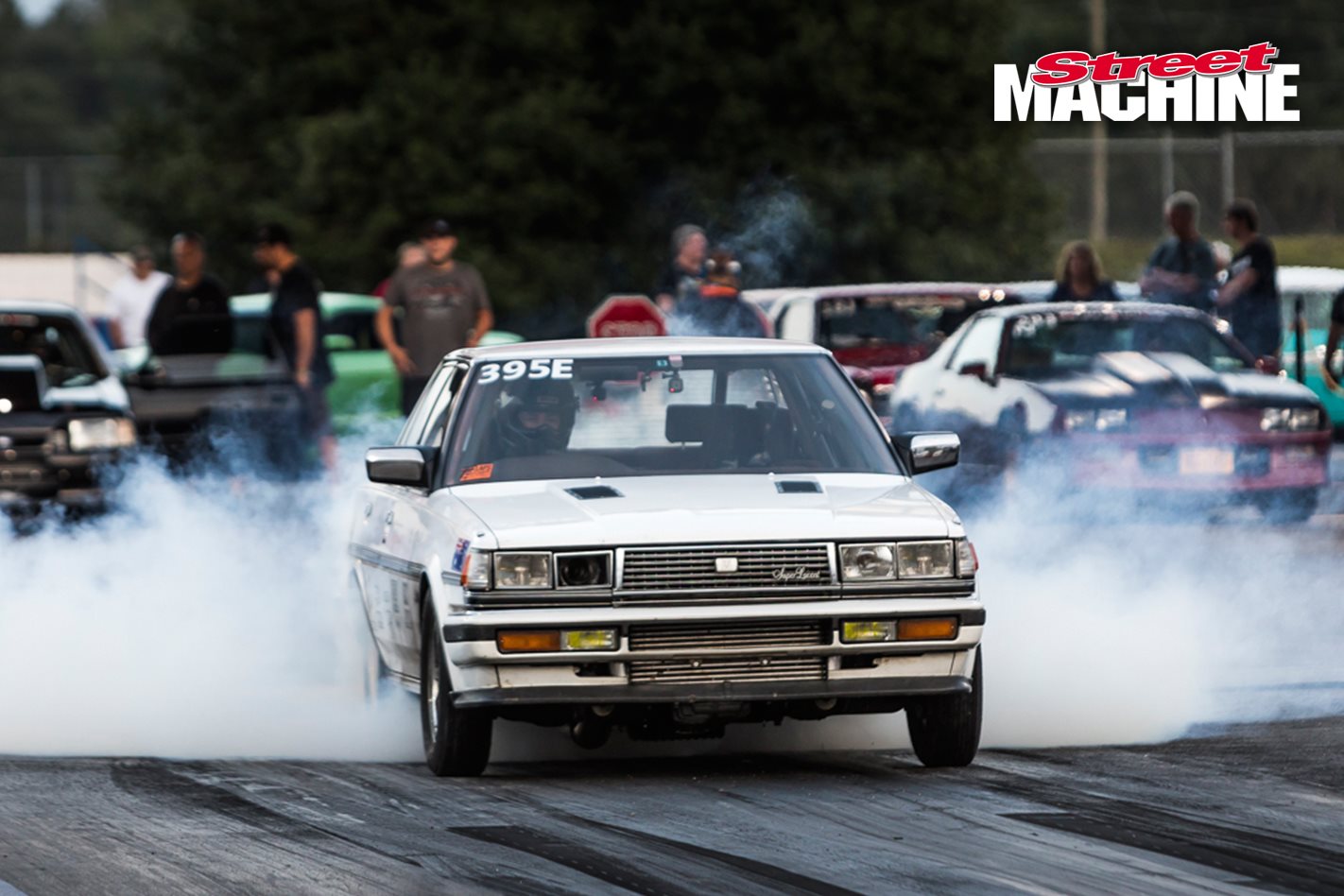 "The old engine is not rated to handle the turbo on it, so I don’t really want to go to Drag Challenge and beat on that engine for five days. Even though it’s nothing like coming to the other side of the world, it’s still 1200 cicks from my place. So I’m keen to do it, but I want it to be under the right circumstances.”

Brenton Gault in the ’55 Chev owned by his dad, Ross, ran a consistent 10.54@126mph to complete his second straight Drag Week.
Harry Haig in the Chevelle had been shooting for 8.5s for the past few days and finally got there, running 8.58@158mph to secure third place in the Street Race Big-Block Power Adder class. 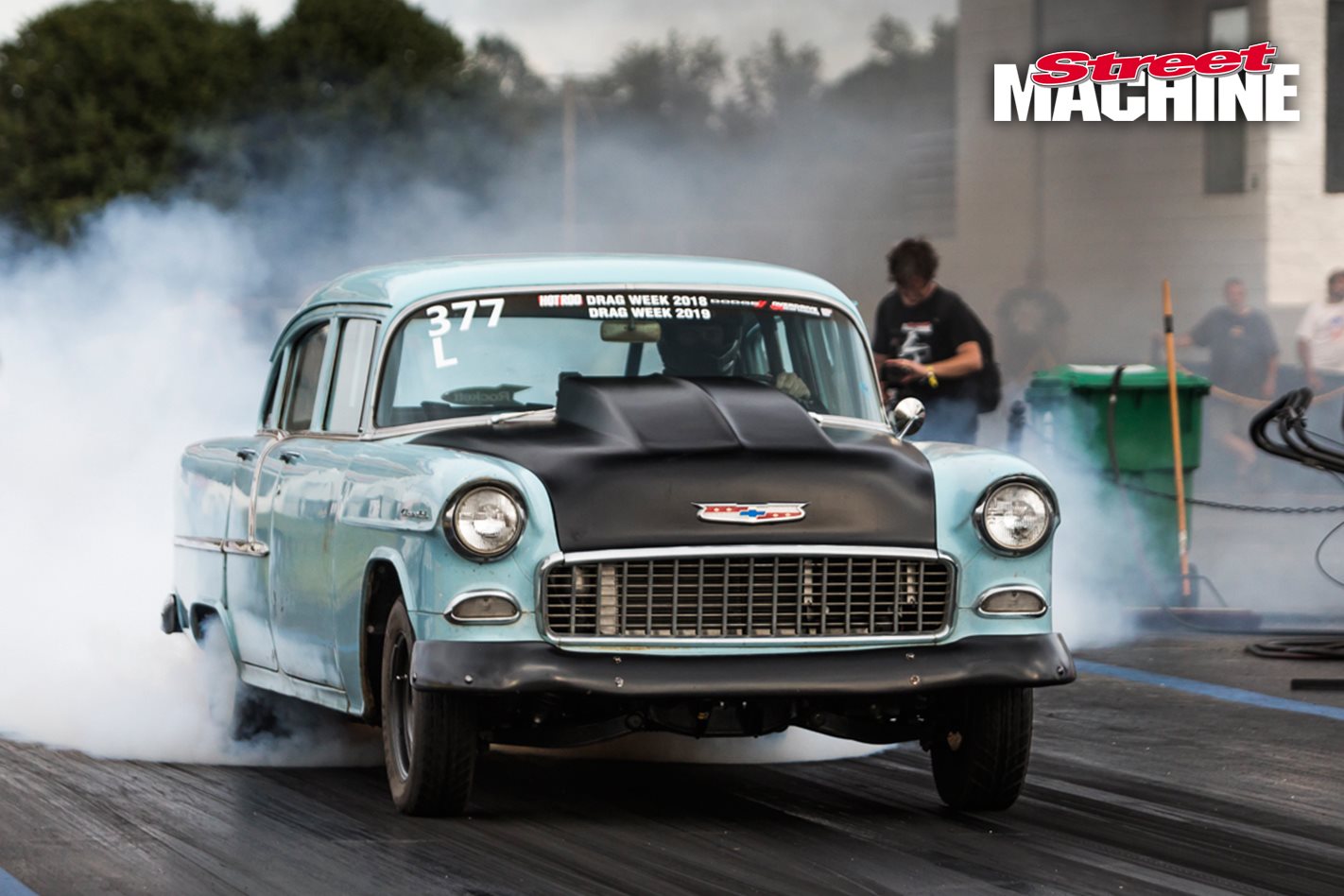 Harry Haig in the Chevelle had been shooting for 8.5s for the past few days and finally got there, running 8.58@158mph to secure third place in the Street Race Big-Block Power Adder class. "It seemed like the car had hit a brick wall; it would go two tenths quicker in the 60-foot, it’d go quicker everywhere else, but then finish was an 8.68,” said Harry. “Even today when we finally got the 8.5, it didn’t feel much better than the other days. It’s had a hoodoo on it all week and today was the day. I can’t explain but it was cool all ’round.” 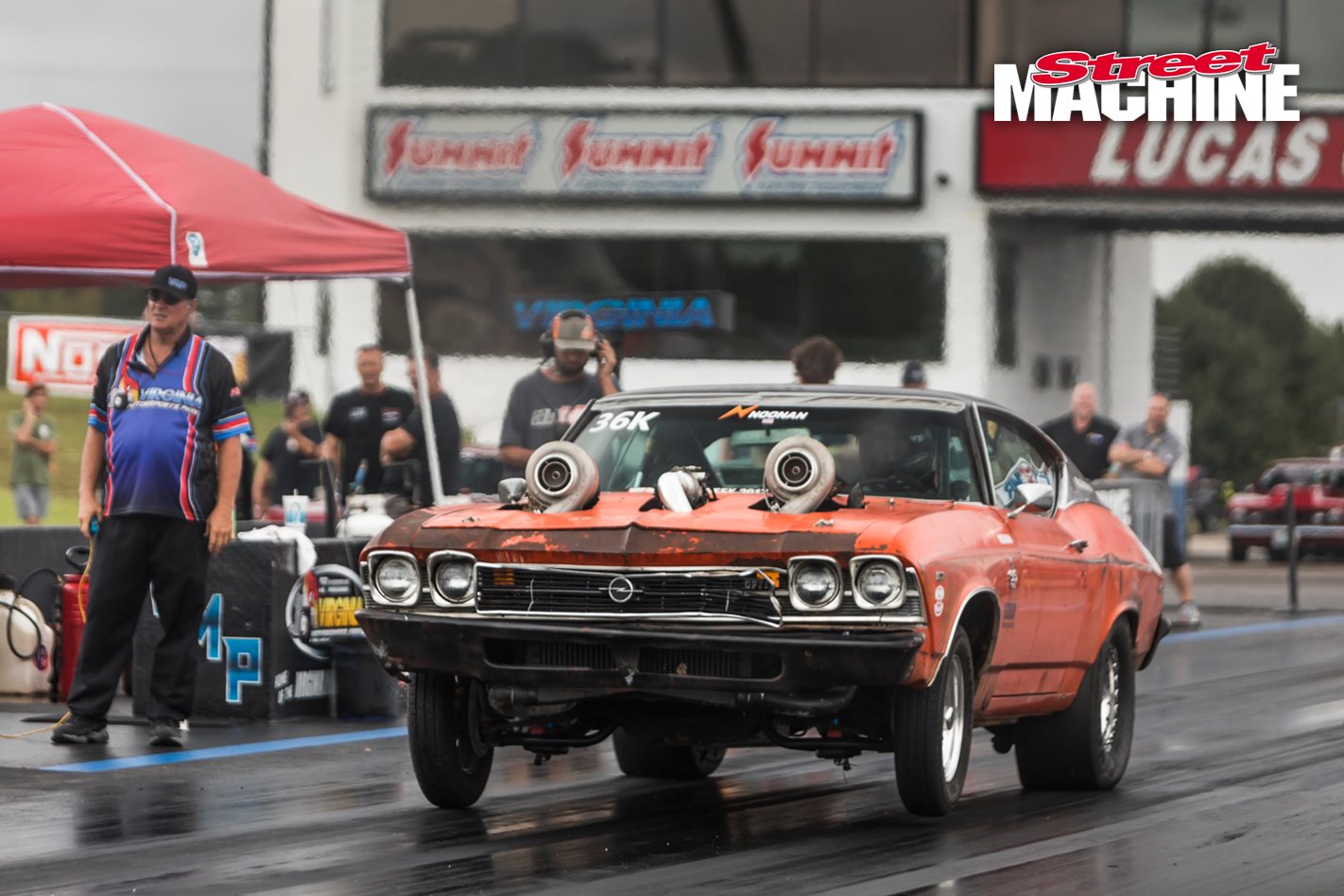 The ‘Malibu Stacy’ wagon raced by Robby Abbott and Corty Haig has virtually been rebuilt on the roadside during Drag Week 2019, but grim determination has kept it in the game. Robby took it out first on Day Five, running 10.25@133mph, before teenage sensation Corty jumped in and put together a great run to shear off two-tenths, going 10.23@133mph. Corty was elated after completing his first Drag Week. 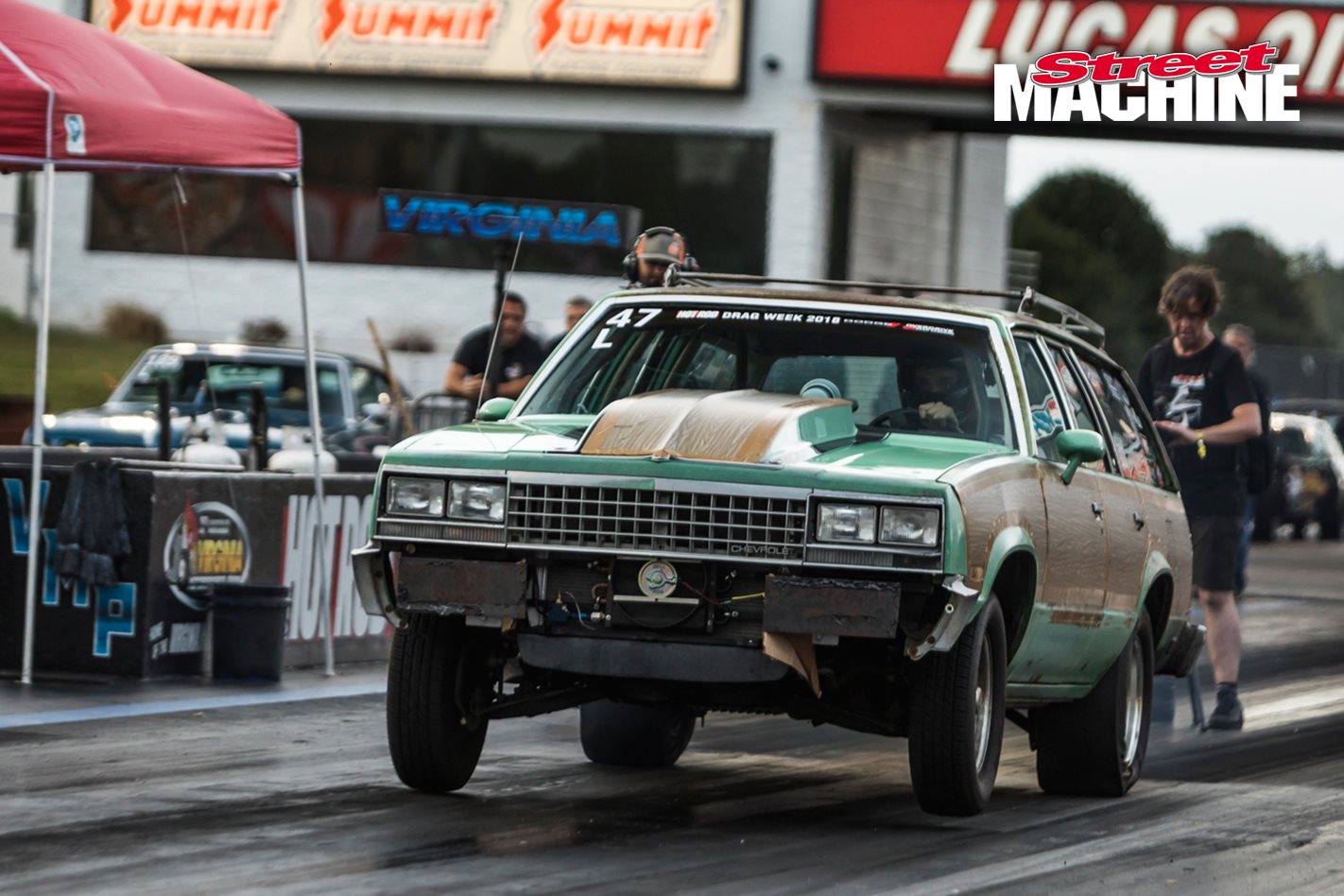 “That last pass, ( didn’t really know what was going to happen but I just sent it, foot to the floor, and she went down,” said Corty. “I just took everyone’s advice and learnt from my last few passes and gave it my all and got the fastest pass today. I’m pretty stoked.” 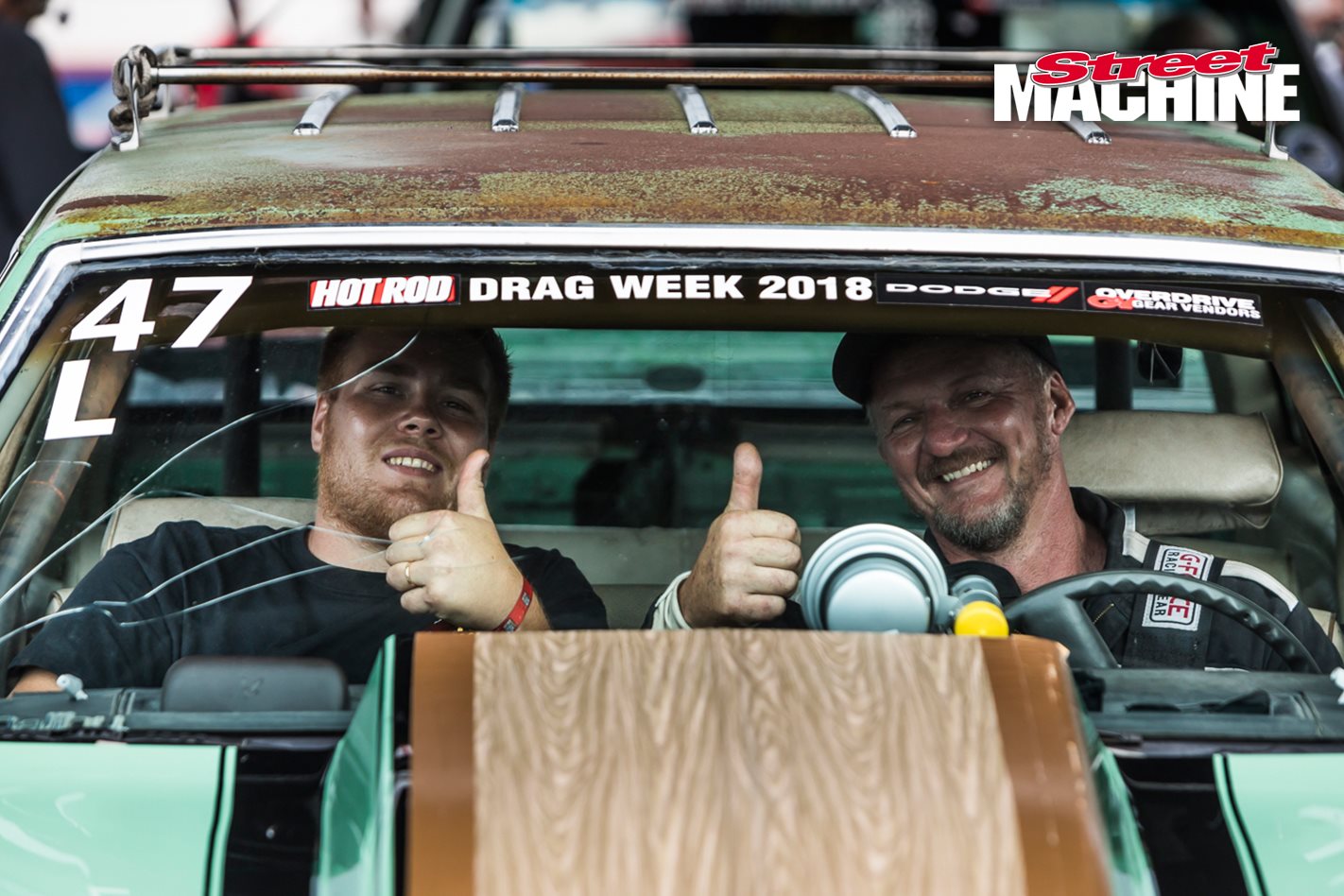 There has been a tight bond formed between some of the Australian and Swedish competitors this week, so the Aussies were cheering on Robin Johannesson’s ‘OG Ascona’ as if it were one of our own.

The nitrous big-block weapon has runs sevens every day despite having problems every day, and most nights too. It finished the week with a 7.8@171mph and Robin won the Spirit Of Drag Week award. 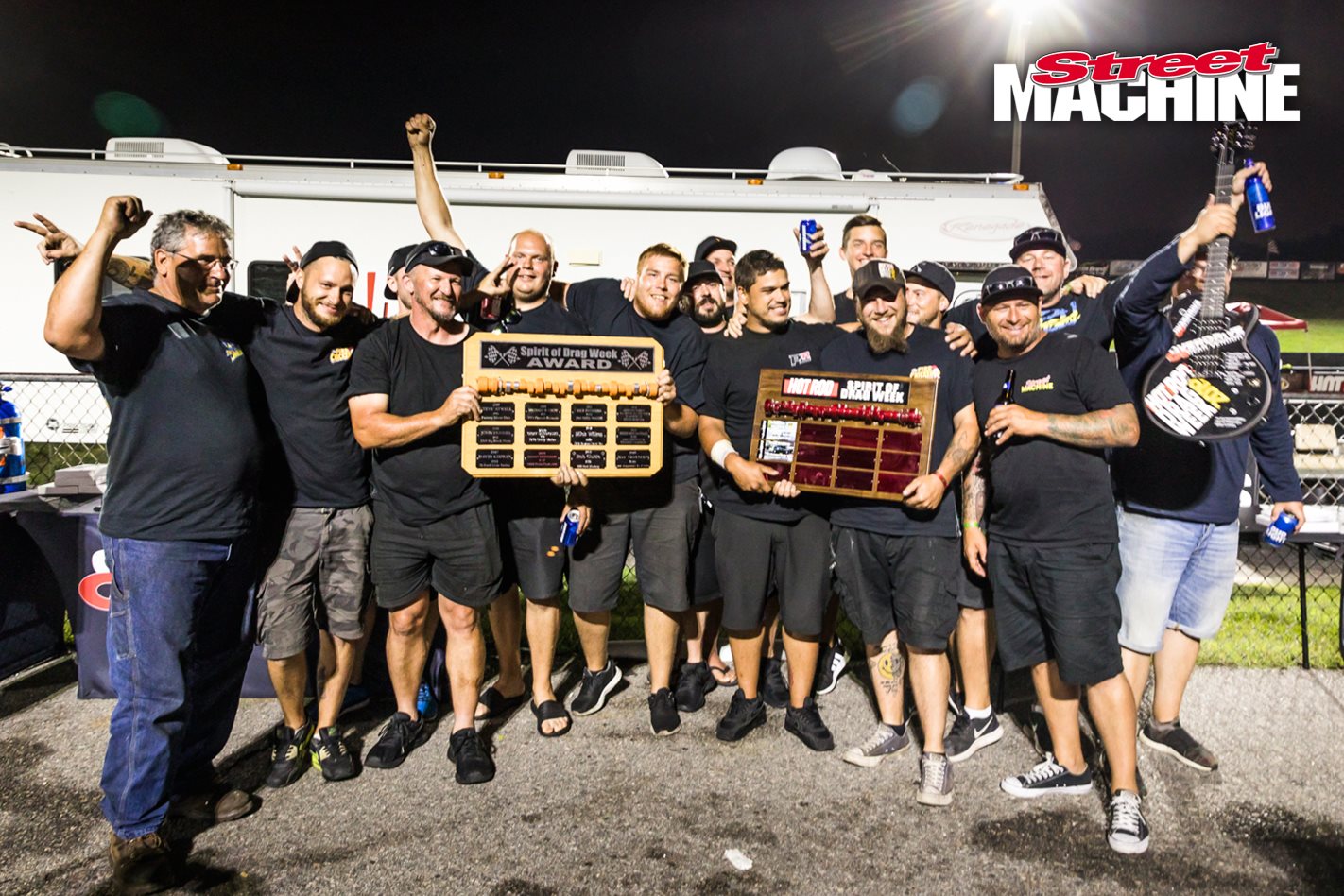 The battle for the Overall win was not really much of a battle at all, with Tom Bailey first and daylight second coming into the final day. Glenn Hunter took third place in his ’56 Chevy, which is impressive considering the car still has all steel panels, chrome bumpers and full interior. In second place was Bryant Goldstone in the all-steel AMC Javelin. 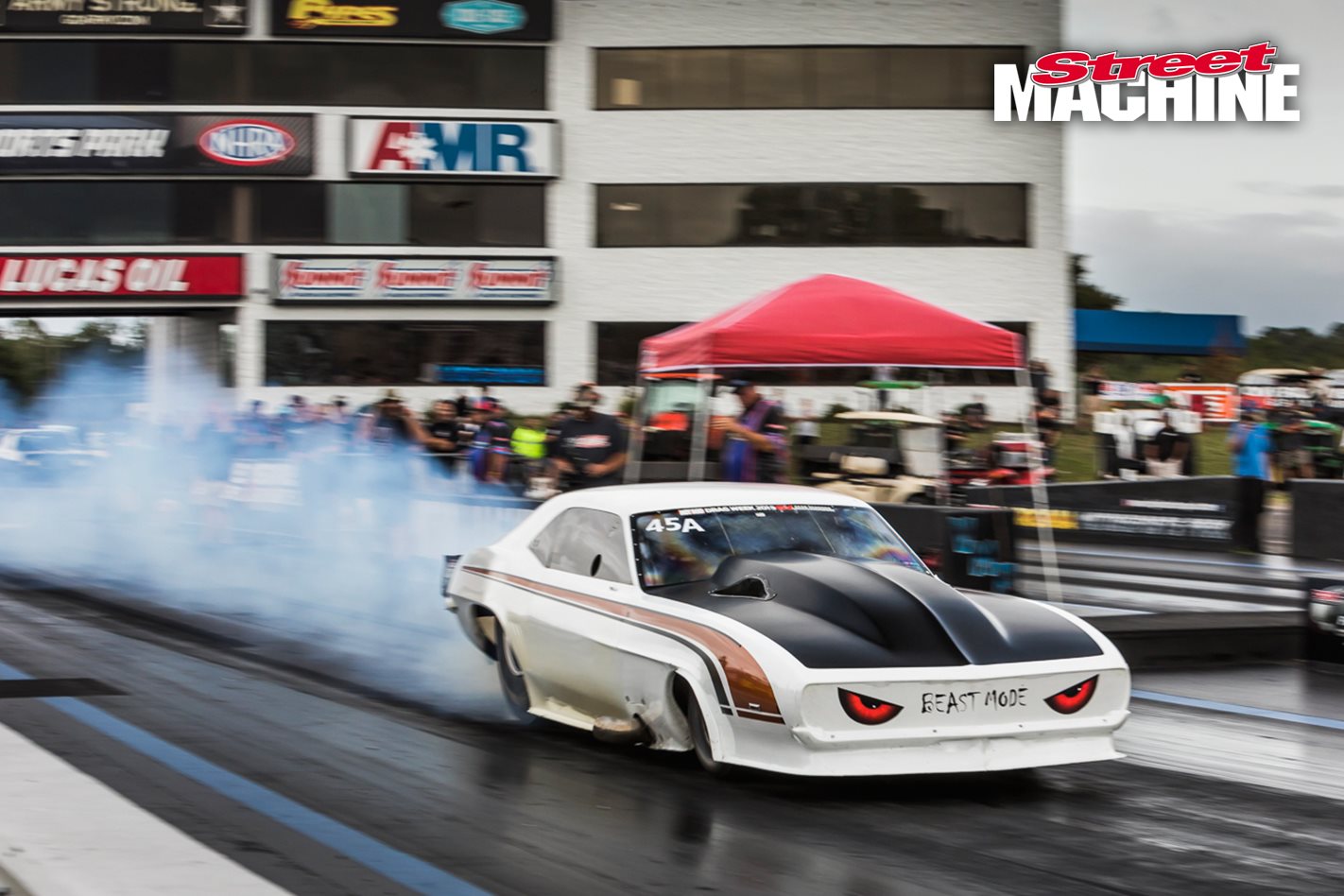 But the week belonged to Tom Bailey and his ‘Sick Seconds 2.0’ Camaro Pro Mod. Since no-one was breathing down his neck and threatening his lead, Tom and his engine builder and co-pilot Steve Morris set themselves the challenge of running the first five-second pass at Drag Week. They almost got there on the car’s second pass of the day, a 6.07@219mph – the quickest pass in Drag Week’s 15-year history, but still not a five. They decided to take one more swing at it, and on the final pass of the day, it all came together. Tom rocketed the Camaro down the track in 5.99@250mph and the whole place erupted. You could feel the elation in the air. Truly an amazing ending to a memorable week. 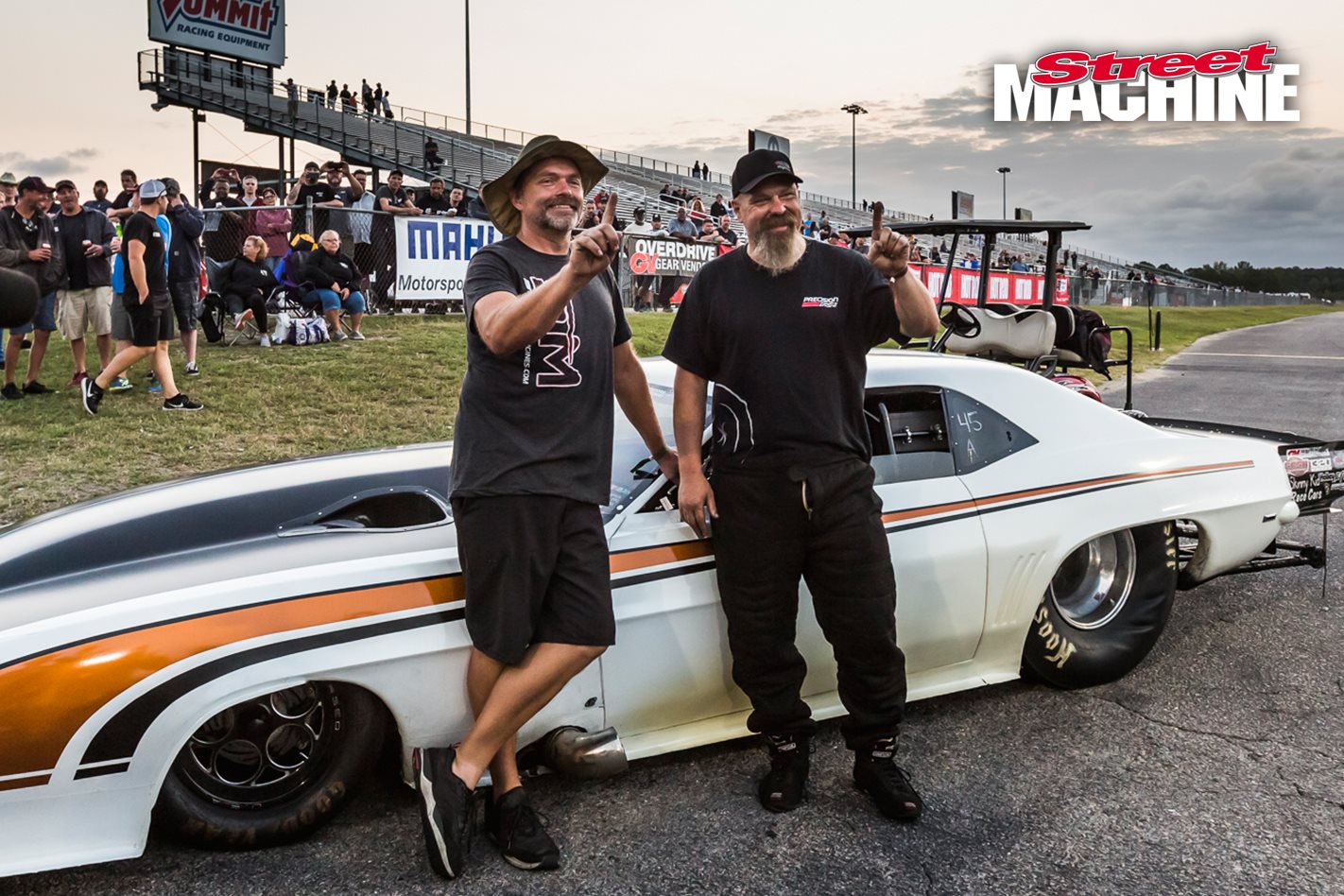 “It knew it was a good hit,” said Tom. “The earlier one, the 6.07, had a couple of hiccups. It felt like it was hitting the chip on both gear changes but when we looked at the data, it hadn’t hit the chip, but it was hitting something that was sending the 02’s [sensors] crazy. We found a loose ground [wire] and said: ‘Well, okay, hopefully that’s the problem.’ And we also leaned it out more. 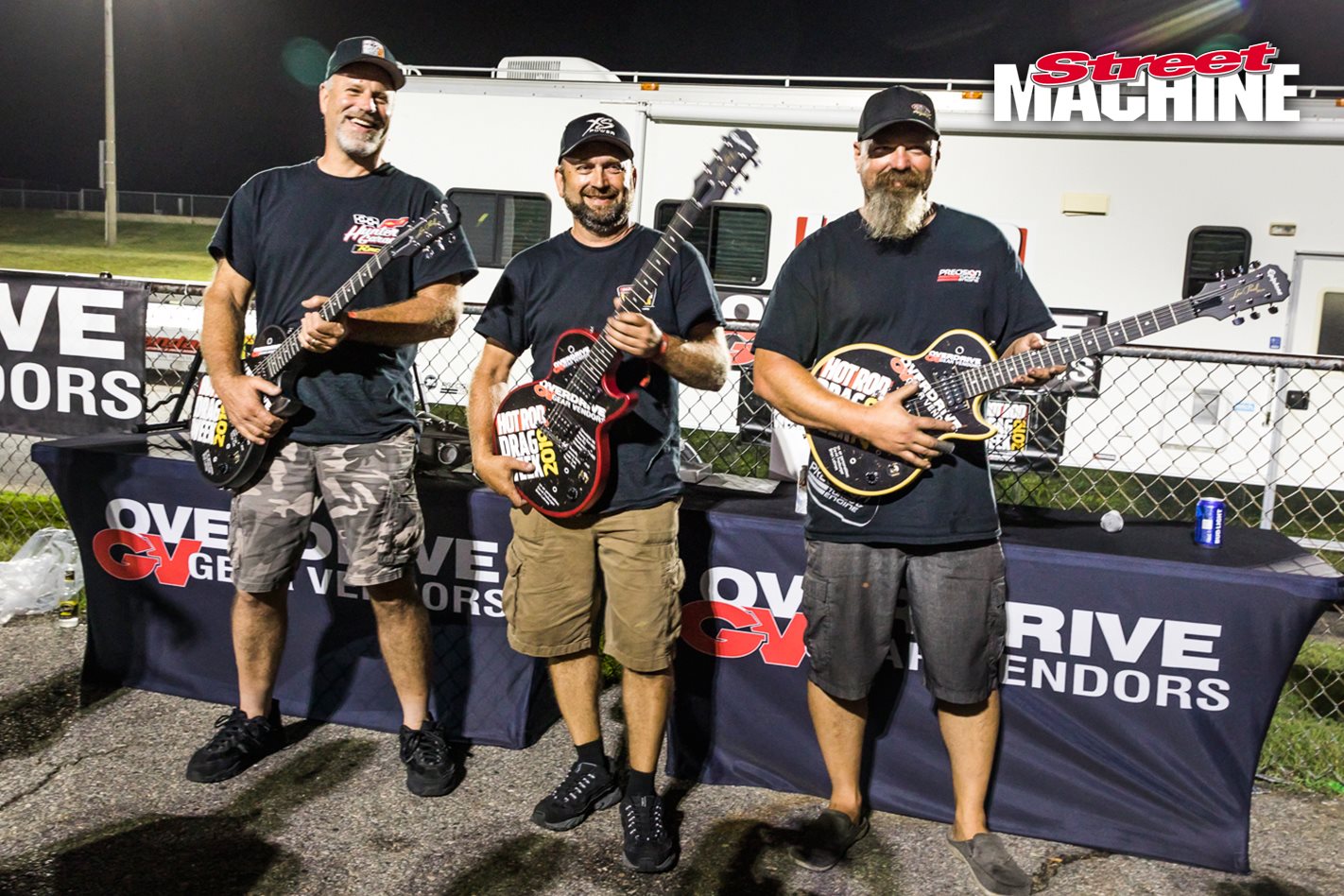 “On that last run, the car was heading left a little bit but I had enough time to think about it and I said: ‘These track guys will prep all the wall, I can let it ride to the line.’ So I just tapped [the brakes] once to get the wheel to touch so I could steer it to the right a little bit and it was good.”